To Thine Own Self Be True

Designer expresses her many loves in Pinehurst cottage

A perfect and very personal renovation is a hard act to follow . . . unless motivated by the heart.

Residential perfection is what interior designer/tennis ace/gardener/artist/yoga practitioner Julie Sanford achieved a decade ago when she resurrected a modest Pinehurst cottage to reflect her background, her foreground, her tastes, philosophies and talents. This woman has sailed across the Atlantic in a 42-foot sloop; climbed partway up Machu Picchu; snorkeled black holes of the Caribbean. She has furnished Nantucket compounds and Manhattan condos for clients; a pied-à-terre in Paris and a Newport, Rhode Island, showplace. Julie’s achievements have reached The New York Times Magazine and Country Living. Her recent projects include collages crafted from leftover wallpaper, as well as further adapting her Pinehurst gem where the sign over the front door reads “Craven Cottage.”

Julie’s approach: “I like the integrity of real. Edit out the junk. Keep the things that motivate you, that make you feel good,” which in her case would be living by the sea. Notice oceanscapes, beaches and ship art. She isn’t shy with color, either subtle or primary: bedroom walls suggest a pineapple daiquiri. A ripe-tomato red lamp jumps off its table. Her kitchen, void of Sub-Zero and Viking, glows pale apricot set off by cream cupboards and a khaki tile backsplash.  “People spend a fortune on the kitchen. It’s not my thing. I’m a good cook but I don’t need the (mega-appliances).” What she does need is open shelving stacked with blue English Transferware, which she uses daily. 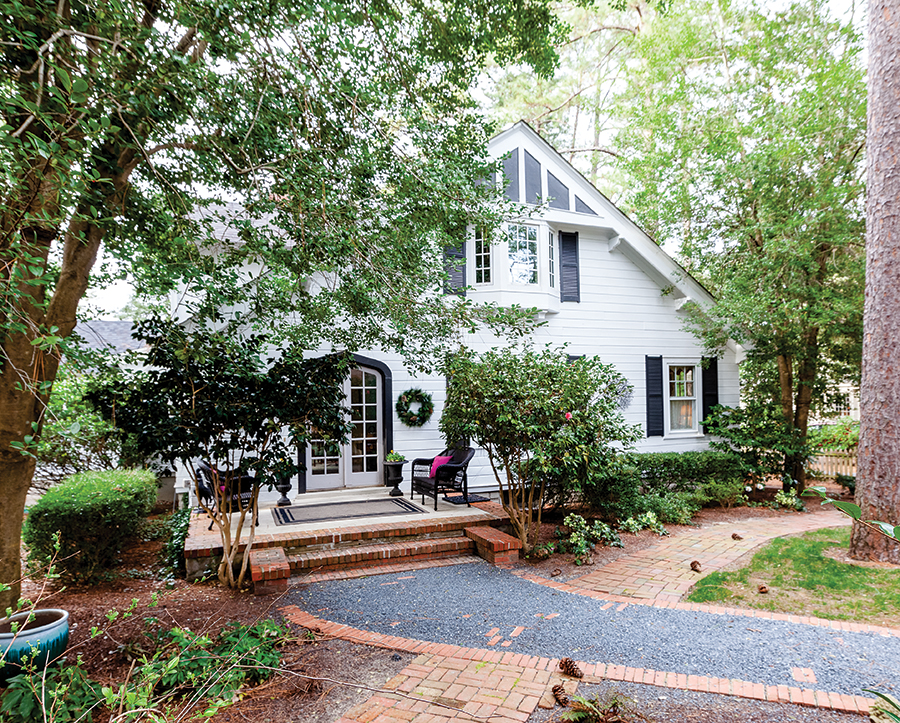 Pervading all, aquamarine, the watery hue Julie used for vestibule floor tiles and living room upholstery. “My spiritual home is the Caribbean,” she admits.

Whimsy — of course. Who else covers a seat cushion with fabric picturing giant insects or runs a row of buttons down a dining room chair? That pink “thing” resembling Valentine lollipops standing at attention on a textured rose Parsons’ table in the otherwise classic living room is an antique balloon mold. Julie favors sculptures of hands which reach out, armless, from shelves and tables. To her, they represent “lending a hand” to someone in need. 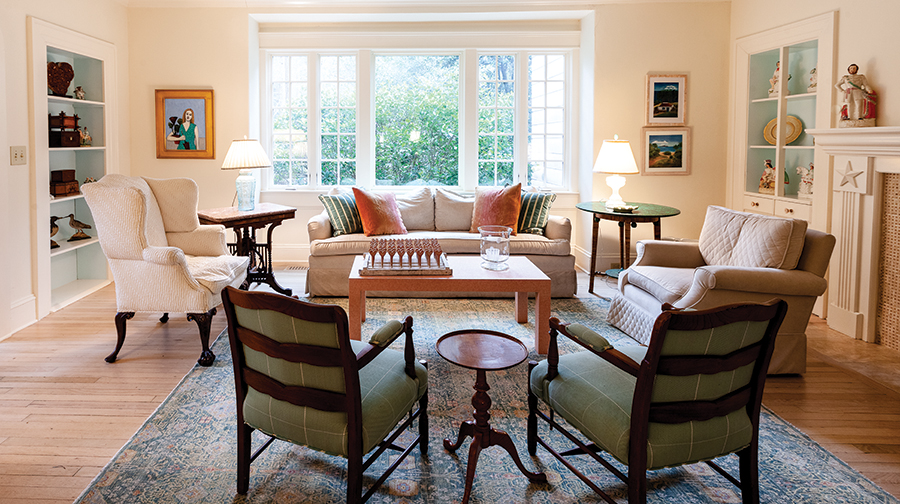 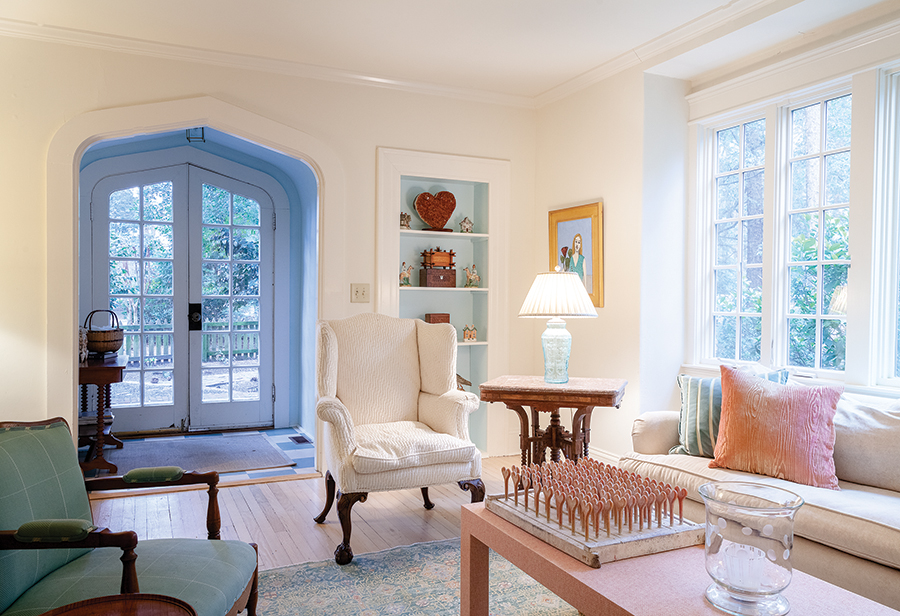 Craven and four sister cottages were built in 1921 and sold to Pinehurst resort as rental properties. According to records at the Tufts Archives, seasonal rental was $1,500. The façade is particularly notable, with a broad gable facing the street, an English country porch and Tudor-arched front door — a feature Julie repeated between the living and dining rooms, and the family room and kitchen. Alice Craven, proprietor of a village knitting shop, occupied the house in the 1930s, followed by John Thomas Craven in the 1950s. Post-Cravens, the cottage was renamed generic Longleaf, but Craven remains over the door.

Julie, raised in New England, found Pinehurst during a visit to Fayetteville, where her mother was being cared for. The village resembled familiar ones in Vermont and on Cape Cod but with a milder climate. Most important, a tennis community thrived here. The cottage she found, drowning in ’60s décor, mandated a major renovation, a welcome challenge for this experienced designer who appreciated the era it represented, especially the narrow-board floors, elaborate crossbeam door and window frames, and light streaming in on all sides — plus a rare full basement. Julie found its modest size (then barely 2,000 square feet) appealing. She believes people relate better in intimate settings.

“The house just sang to me from the get-go.” 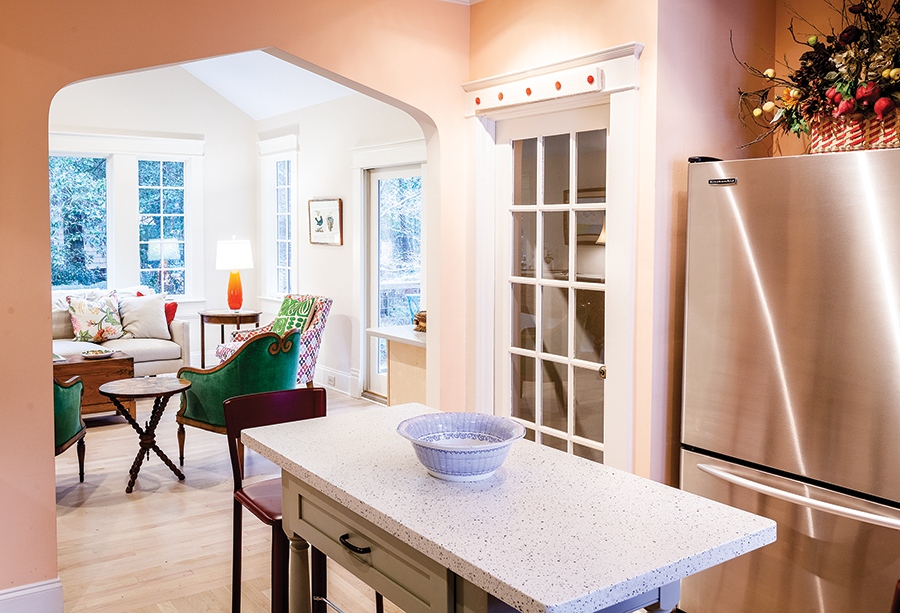 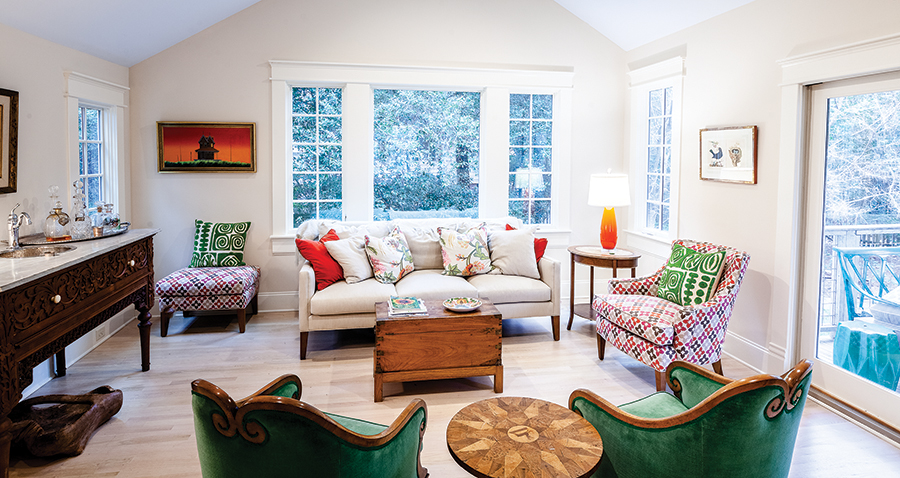 After living single for 25 years, Julie realized modifications would be necessary. Her low-ceilinged bedrooms were in the finished attic, accessed by a steep, narrow staircase. The large main floor room Julie had added as a yoga studio became a master bed-sitting room painted yellow, her “happy color.” Its bathroom has dizzying black polka-dot wallpaper punctuated with French Gien plates, each decorated with a cartoon. “A bit extreme, but it makes me laugh,” Julie says. She built a family room with cathedral ceiling off the kitchen because, “My husband is a big man. We have four dogs. There wasn’t room anywhere for me to sit.” Original wood floors, except in the dining room, have been pickled (whitewashed), rendering the rooms light and summery, reminiscent of Martha’s Vineyard.

Completing the enlargement is a deck, covered and open, overlooking the garden. A self-described passionate gardener, Julie recalls how caring for geraniums figured in meeting the love of her life. 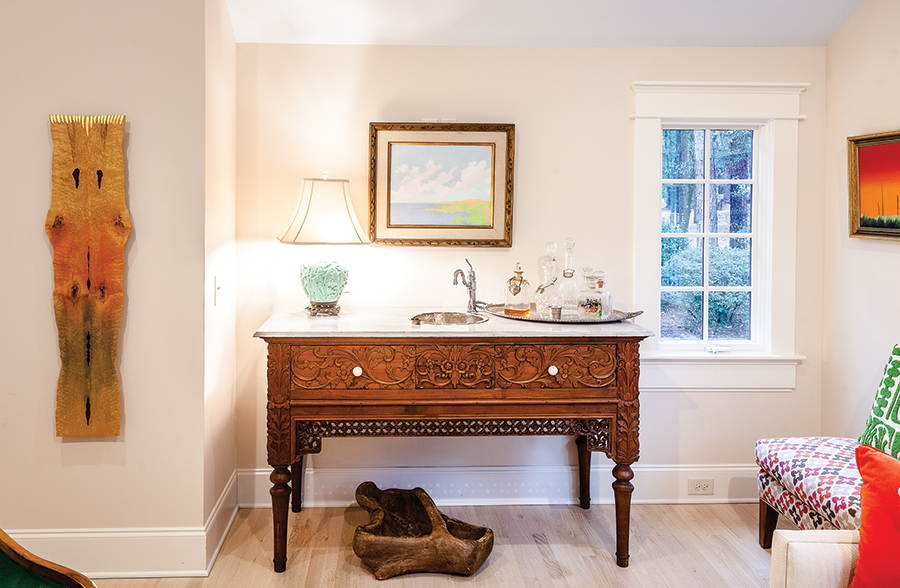 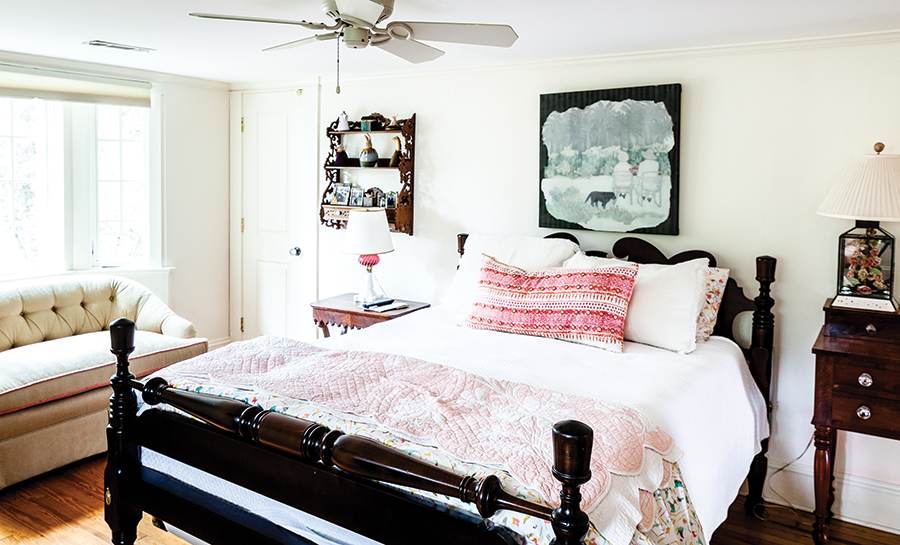 An organic, zen-calm separates Julie’s space from houses bustling with décor trends. She has achieved a new, fresh feeling using antiques of different periods and provenance that hang together like old friends. The almost monastic absence of clutter gives each piece — whether a marble-topped side table or an inlaid bureau — room to shine. The same with paintings, some she did herself, mounted singly rather than in groups.  Themes and colors (especially green, representing nature) flow from room to room, as do objects like Staffordshire figurine lamps and animal art.

Perfect as this home is, Julie and George have another, equally unusual: a 19th century mobile chapel used by itinerant New England preachers. The 20-by-28-foot wheeled structure was pulled from town to town by oxen. Now, the couple has moored it in Jamestown, Rhode Island, within sight of the sea, from whence Julie came.

“My home is my sanctuary,” Julie says. And, in this case, a self-portrait.  PS