Treat yourself all year

We’re ready for the traditional lineup of Valentine’s Day confections. Bring on the chocolate-covered strawberries, red and pink M&M’s, conversation hearts and all of the other holiday sweets in between. (To be totally honest, we even use the lover’s day as cover to sneak desserts that have no holiday repute . . . say, two scoops of vanilla with sprinkles.)

But for the supposed holiday of love, Valentine’s Day can be quite the Scrooge with its adoration. Trust us, we’re not knocking desserts, but other meals have merit, too. Here are a few “not desserts” that deserve their holiday due, six breakfast-through-dinner favorites being served up year-round that might just give Valentine’s Day desserts a run for their date-night money.

These belong high on the list of “you just gotta try this.” It’s not that these dishes have anything to do with Feb. 14, it’s just because it’s food we’re in love with 12 months of the year. Of course, we’ll still be saving room.

A pizza shop isn’t the first place we’d go to look for Vietnamese cuisine, but it should be. “With the pho, we didn’t have it around here,” says James Lam, co-owner with his wife, Keena, of Steve’s TK Pizza & Hot Subs. Pho is a traditional Vietnamese soup that combines a protein, rice noodles, onions, seasoned broth and toppings like Thai basil, cilantro, bean sprouts and lime wedge. “It was a drive for us to go to Raleigh and back to even get it,” he says. So, the couple channeled their Vietnamese heritage and started cooking up pho at Steve’s. The recipe came from Jame’s brother Ti Lu. And it’s definitely been worth it for us. The restaurant offers pho ga, which is chicken; and pho bo, which is beef, in a regular or super-sized bowl. 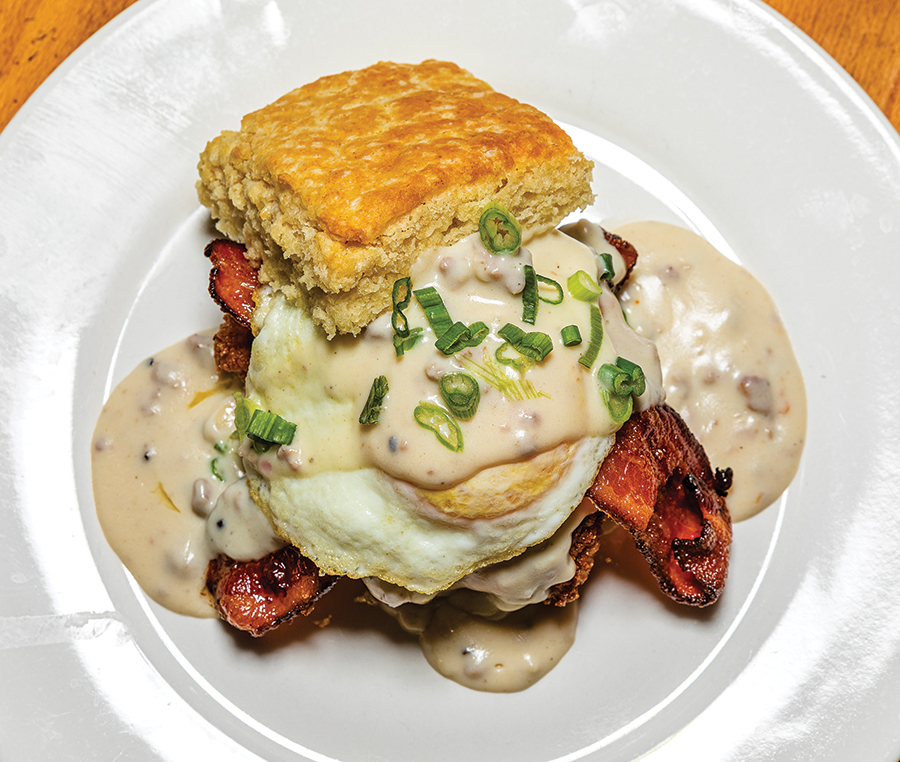 “The dish is one of our homemade split buttermilk biscuits, deep-fried chicken thighs in a special breading that we put together. We top it with some cheddar cheese, pecan-smoked bacon, over-easy egg, and we put our homemade sausage gravy on top,” says Brian Hainley, chef and co-owner, with his wife, Alison, of Mason’s Restaurant & Grocery. And if you’re looking for an extra kick to help sweat out that hangover, get it Nashville hot. “It’s just a little bit of everything; it’s messy,” Hainley says with a laugh. Hence the name Train Wreck. “I’ve seen one person try to pick it up and eat it, and you can’t do that. It’s a knife and fork thing for sure.” 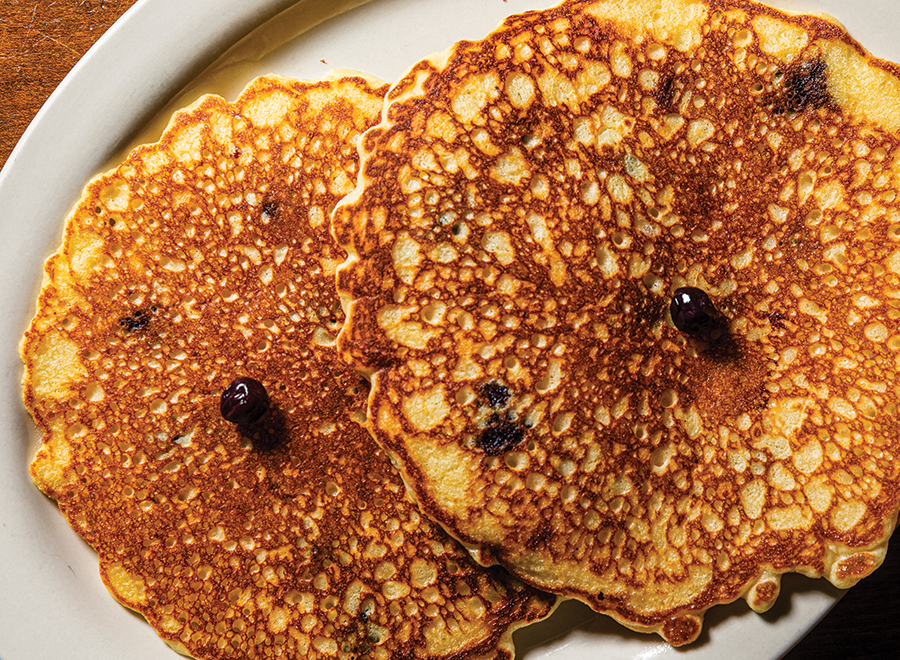 “We do plain, we do chocolate chip now as well, but everybody loves that blueberry pancake,” says Tracy Cormier, owner of the Pinehurst Track Restaurant. She and her late husband, harness racer Real “Coco” Cormier, bought the restaurant almost 25 years ago and have since earned well-deserved accolades for their blueberry pancakes, even making a cameo appearance on The Golf Channel. “We get the mix, but my husband started it . . . and doctored it up. I can’t tell you the recipe. It’s a secret,” says Cormier. “I think it’s special also because it’s fresh blueberries.” But we’re convinced it’s because of the people. Get a short stack, full stack or even ask for a single — Tracy’s brother and restaurant manager Glenn Hartman will whip it up. 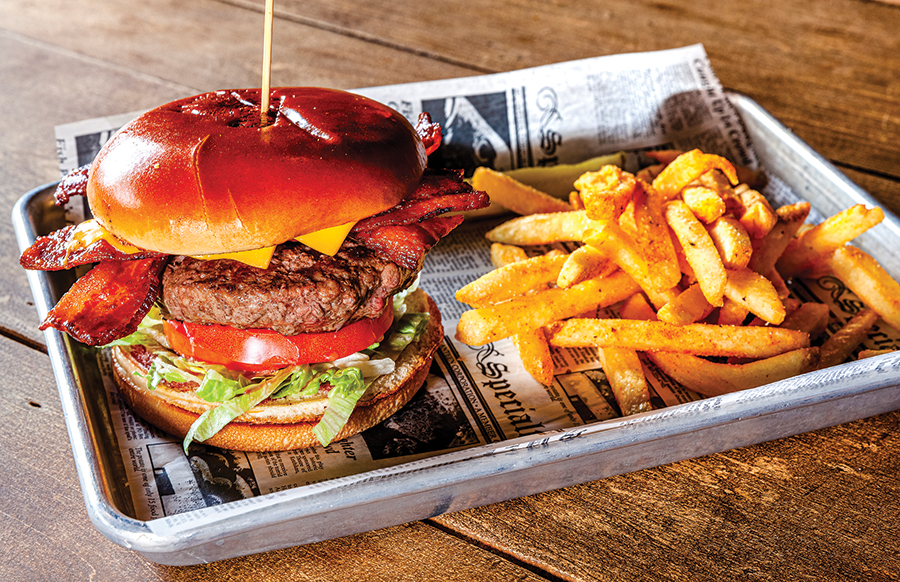 Sometimes all you need is a good burger, especially after 18 holes. Lucky for you, Pine Needles Lodge & Golf Club has been serving up the Bell Burger for years at their 19th hole, the In-the-Rough Lounge. “It’s something that’s been a staple here,” says Graham Gilmore, the manager of the lounge. It’s a classic — a fresh 8-ounce patty topped with American cheese, applewood-smoked bacon, shaved lettuce and tomato, sandwiched by a toasted brioche bun that’s branded with the Pine Needles logo. “Anything to do with Mrs. Bell was always the biggest and the best, so that’s what we wanted to do with the burger,” says Gilmore of the staple’s namesake, World Golf Hall of Famer Peggy Kirk Bell. “It goes with the whole motif here; everything is about Bell and golf.” 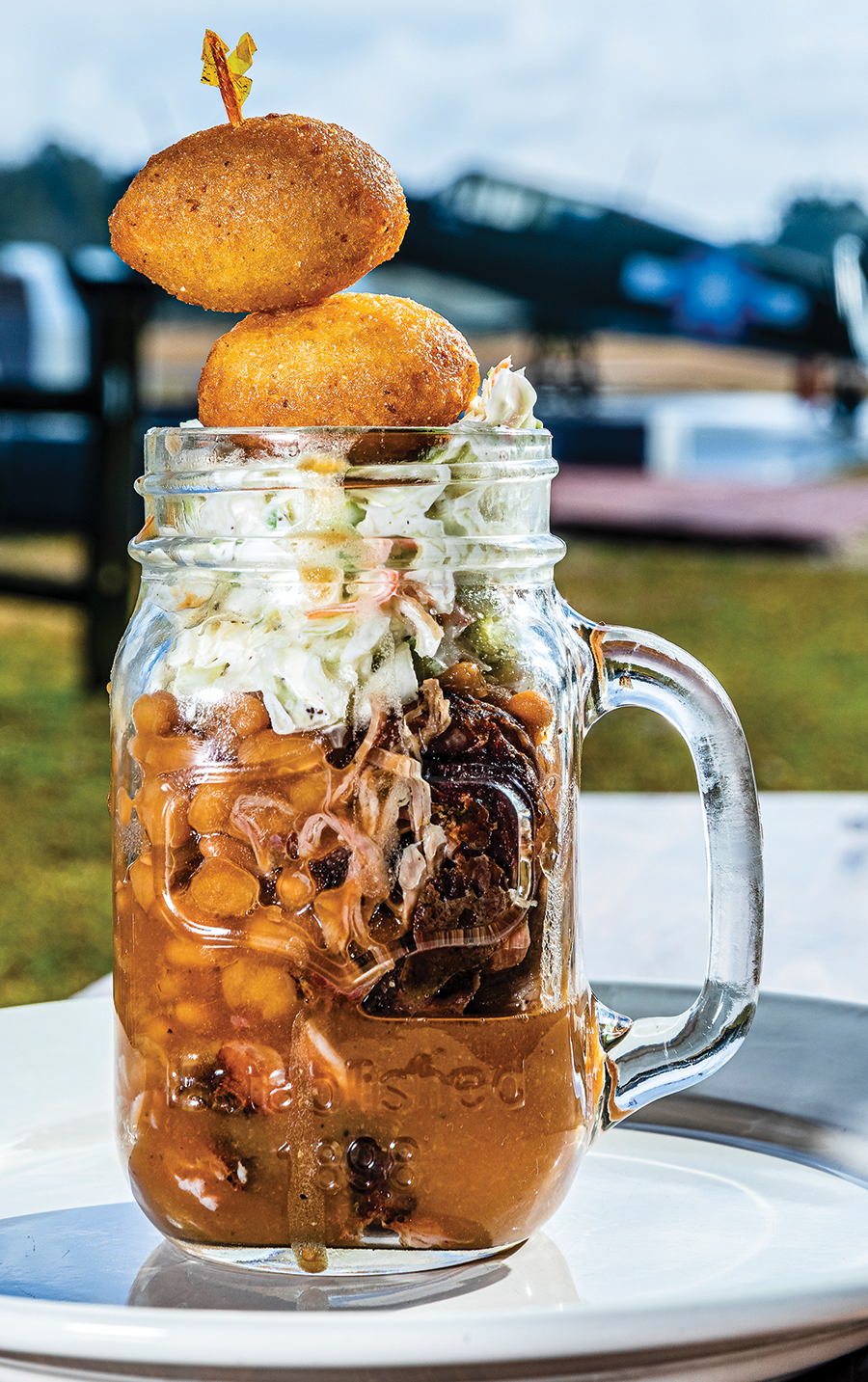 There’s no ice cream in the Pik N Pig’s BBQ sundae. “It’s barbecue, baked beans, cole slaw, and we top it off with two hush puppies here in the restaurant,” says Jerad Wilson, the restaurant’s manager. The trifle-style dish is layered into a mason jar that’s nested in a bowl, so you can dump out the goods and mix them all together. “The idea came from the fair,” Wilson explains. “When we got into the state fair, it was, ‘What can we make that’s easy for people to walk around with and still eat?’ And that’s when we put everything into a cup. At the fair, it comes in a to-go cup with a spork, and people just go to town.” 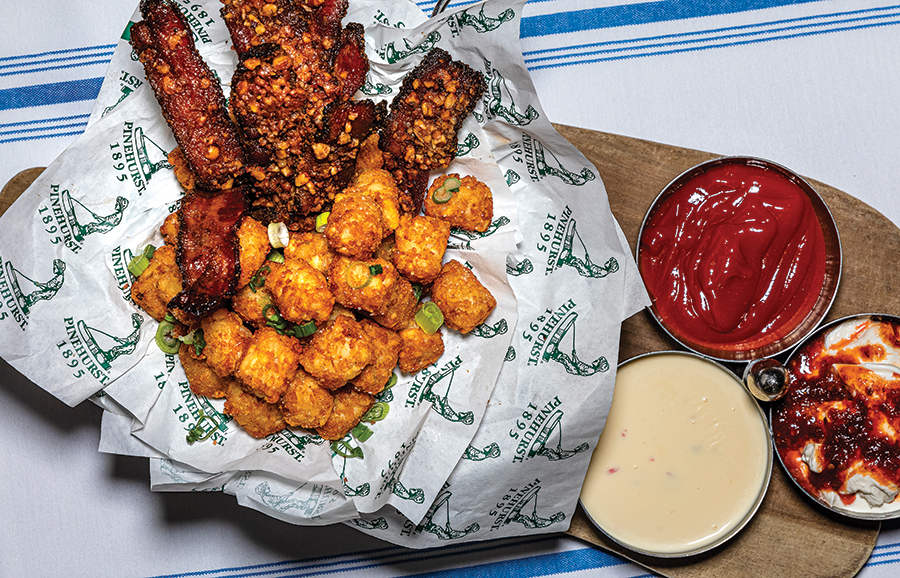 “It’s kind of a fan favorite as far as the appetizers go,” says Francesca Carter, manager of The Deuce — the 19th hole at historic Pinehurst No. 2. She’s talking about the restaurant’s famed “Taterman” Tots. This shareable dish features a basket of golden-brown tater tots garnished with scallions and served with a trio of house-made dipping sauces: chipotle sour cream, Pepper Jack cheese and, of course, a classic ketchup. But the bacon, broken into halves and nestled in behind the tots, is the real MVP. “That’s what people order this for,” Carter says. “They will tell us, ‘Oh yeah, we came here and got this just for the pecan-crusted maple bacon.”

Jenna Biter is a writer, entrepreneur and military wife in the Sandhills. She can be reached at jenna.biter@gmail.com.

Because we couldn’t decide on just six drool-worthy dishes, here are a few more to tantalize your taste buds.

Granny’s Donuts — The Tarheel. But of course. The state donut.

Betsy’s Crêpes — The Samurai. Warrior-class breakfast, salmon and rice for the sushi lover in you.

The House of Fish Seafood Restaurant — Stuffed salmon. Seafood in the center, asparagus on the side.

Li’l Dino — French fries. How to push a sub over the edge.

Ashten’s Restaurant — Reuben Egg Rolls. Stuffed with corned beef, sauerkraut, Swiss cheese and caper remoulade. Grab them if you can.

The Bakehouse — Barcelona Burger. It’s a beef, spinach and onion mixture topped with American-Swiss cheese and garlic sauce on a fresh-baked bun.

Grinders and Gravy — Meatball Parmesan grinder with gravy and mozzarella. A legend already.

The Ice Cream Parlor Restaurant — Homemade chicken salad, in a wrap or on whole wheat, white or rye.

Chef Warren’s — Yoga waffle. You can’t get bent out of shape with this Belgian waffle, biscoff, vanilla ice cream and chocolate sauce.

Dugan’s Pub — Pub soup. Beef, bacon, cheddar cheese, onions, and on and on. Hot soup for a cold day.