Relocation at its best

According to Alfred, Lord Tennyson, “Old age hath yet his honor and his toil . . . ”

Maybe, but the inevitable task of dividing up possessions and moving from a beloved family home is usually more toil than honor. This process, now called downsizing, may cause trauma for elders and squabbles among children.

Not for Jane and Dan Clark. Heavens, no.

“I took all my pretty things,” Jane says, upbeat and with a touch of defiance.

This defiance created in a 1,500-square-foot Penick Village cottage a microcosm of the Clark’s 5,000-plus-square-foot manse on Massachusetts Avenue and, more recently, an Aberdeen home of equal size set on 12 wooded acres, suitable for the lifestyles of Dr. Dan Clark, a radiologist, and Jane, Southern Pines mayor in the 1980s. In addition, the Clarks retain a charming historic coastal home in Southport, which Jane calls her “happy place.” 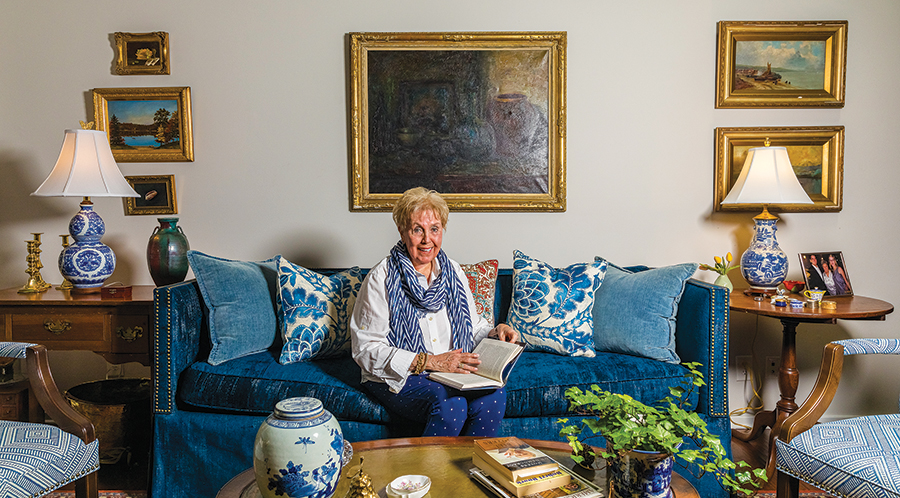 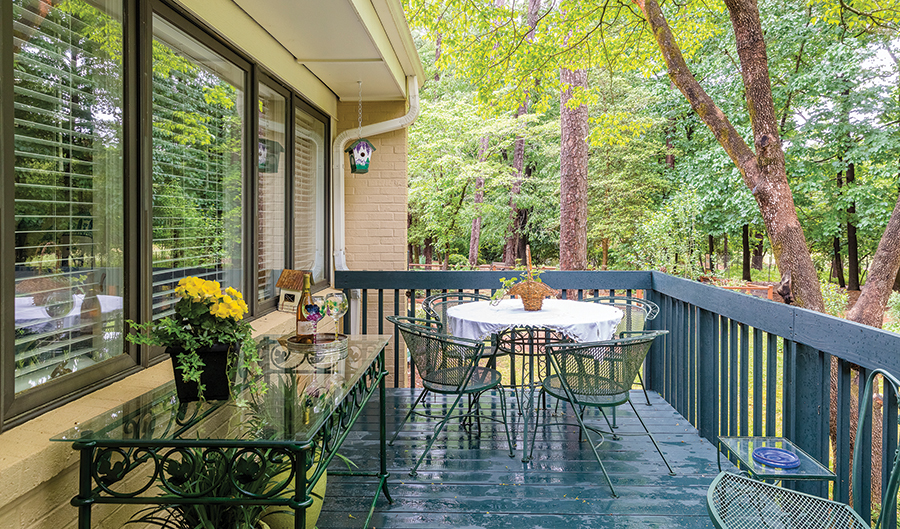 Jane and Dan played marbles in kindergarten. Their friendship continued through school in the farming community of Everetts, current population 179. They married, were deployed by the Army to Texas and Japan, settled in Southern Pines in 1970. Dan established Pinehurst Radiology, and Jane took up politics. By the late 1980s she became Southern Pines’ Madame Mayor.

This power couple needed space to raise four daughters and entertain. Jane filled it with lovely things found in the shops of Charleston, Savannah, New Orleans and elsewhere.

But, like with many couples reaching their mid-80s, spatial requirements had changed. Their daughters were long grown and gone with homes of their own and little need to raid the family nest.

“We needed to downsize for me,” Jane says. “I had to do everything.” 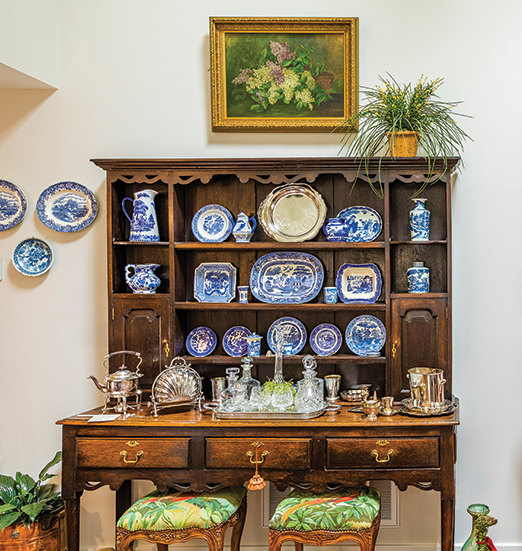 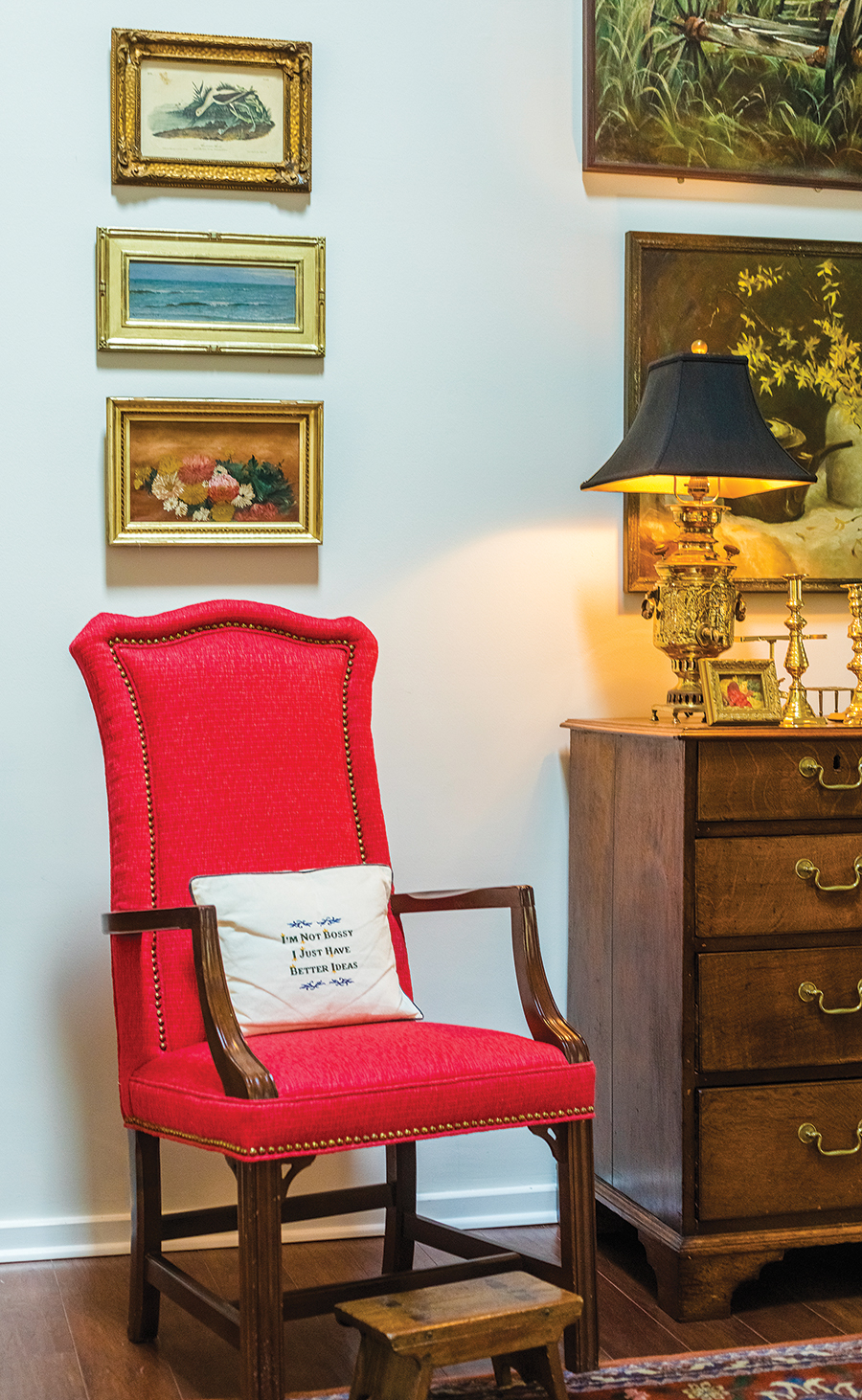 They looked at apartments, which Jane dismissed as “like a hotel.” Instead, they chose an attached two-bedroom brick-and-shingles unit in a quiet Penick corner backing on Weymouth, where they watch equestrians through a fence or from a deck that Jane had extended 3 feet and painted mossy green. Their private garden is even sweeter since maintenance is provided.

The Clarks moved in on March 1, accompanied by most of Jane’s “pretty things.” The trauma was lessened by friends and professionals who packed and unpacked more than 100 boxes, arranged furniture and hung paintings, sometimes with Jane’s input, sometimes on trust.

“I’m not bossy. I just have better ideas,” Jane says.

At first glance it appears that Jane must have brought everything. However, this panoply of beautiful objects is arranged so as not to overwhelm, aided by a soaring cathedral ceiling with skylight that bounces sunbeams off the gleaming silver serving pieces. Interspersed are family photos, each telling a story, including one of Jane and President Joe Biden.

The spacious unit with an efficient little gem of a kitchen redone in white and stainless steel is a retirees’ dream, though Jane rarely cooks anymore. But she longed to leave her mark: Narrow-strip wood flooring was replaced with wider boards, stained dark, like the home she left. Ceiling moldings were added. A wall dividing living room from sunroom was opened up and shelved for books. Throughout, corners were filled with adorable small tables and cabinets. 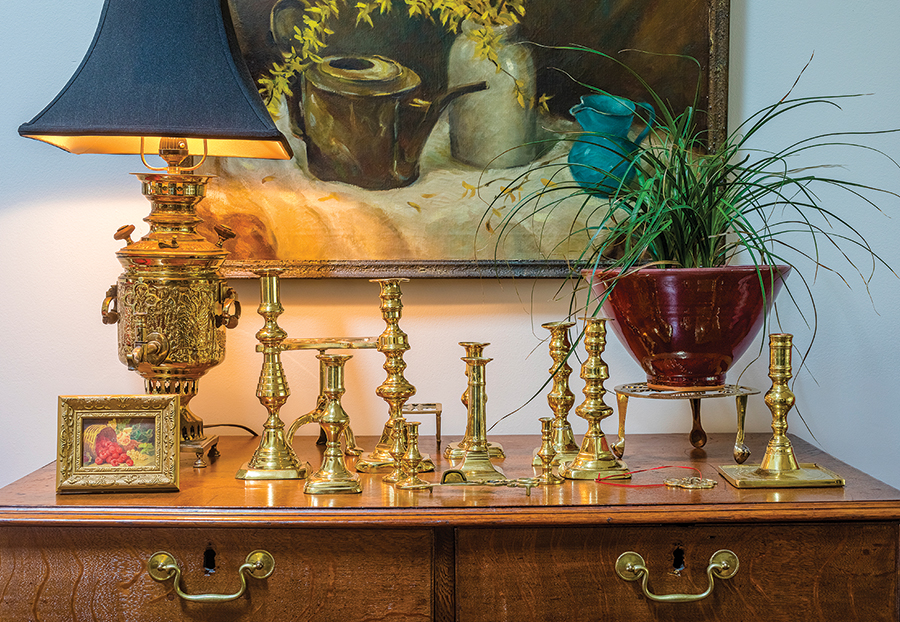 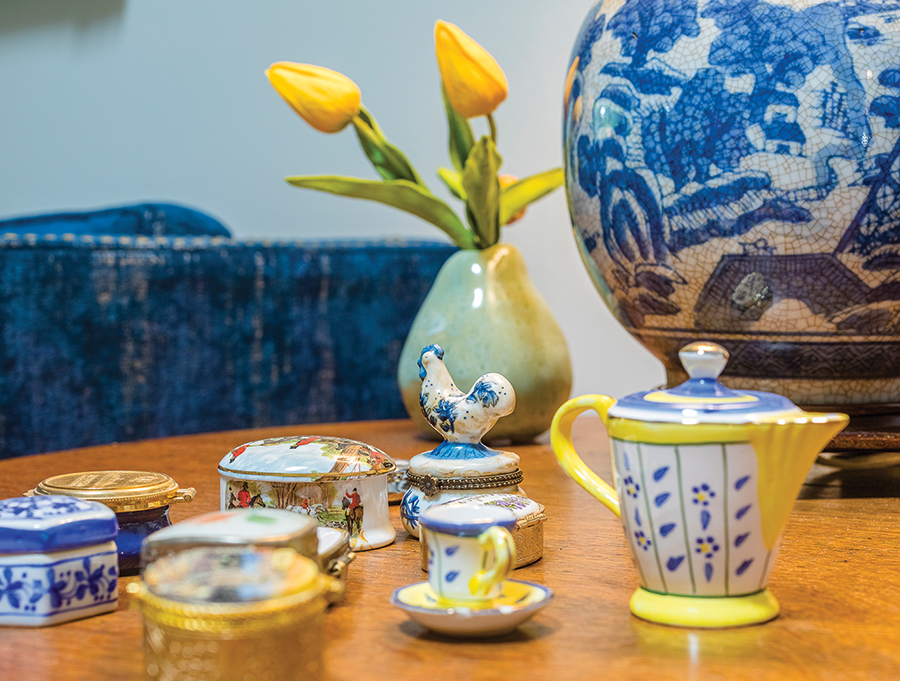 Jane was adamant about bringing three large chest/buffet/sideboard pieces, one found in Cherokee, which she stripped and refinished. When she deemed their dining room table seating 10 too large, she replaced it with an elongated sofa table with drop-leaf panels.

Sentimental value supercedes price: She could not leave behind a table spotted long ago in Rhinebeck, N.Y., while on a bus trip. “That was when you could fold things up and put them under the bus.”

Paintings lean toward dark classical land and seascapes except for a large unframed still life of pears, hanging beneath the skylight.

For pure charm, however, nothing comes close to the breakfast nook with a small round French wine-tasting table, also a sunroom overlooking the garden, furnished in matching armchairs upholstered blue and white, a primitive pine TV table, footstools and a crate with a blue and white pad for Martin, their Yorkie. This sunroom also displays Jane’s prized and well-worn 17th century pottery olive jug from France.

Dr. Dan’s collection of antique ship’s clocks is secured in the second bedroom. 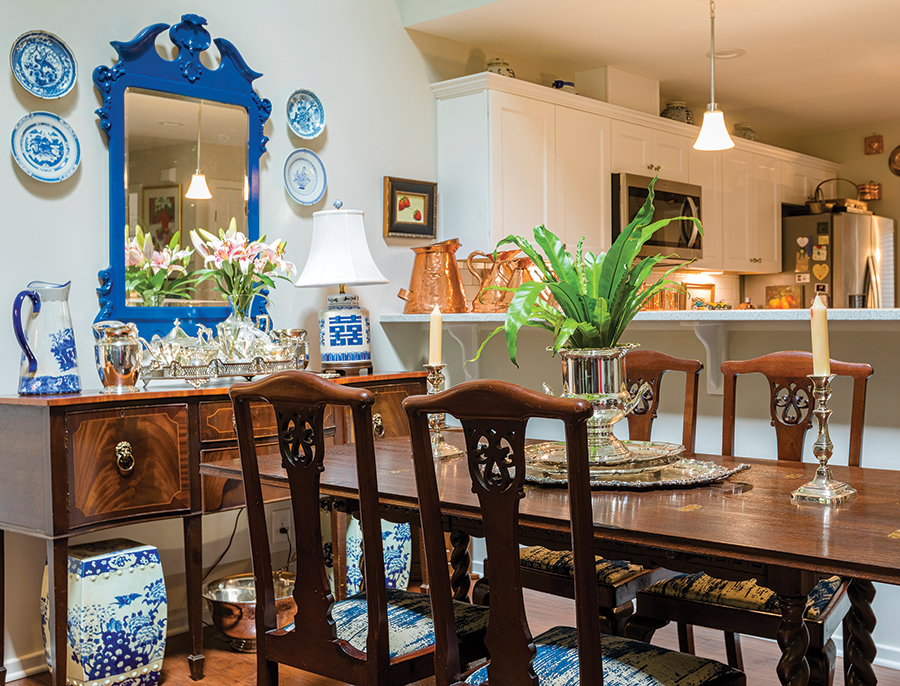 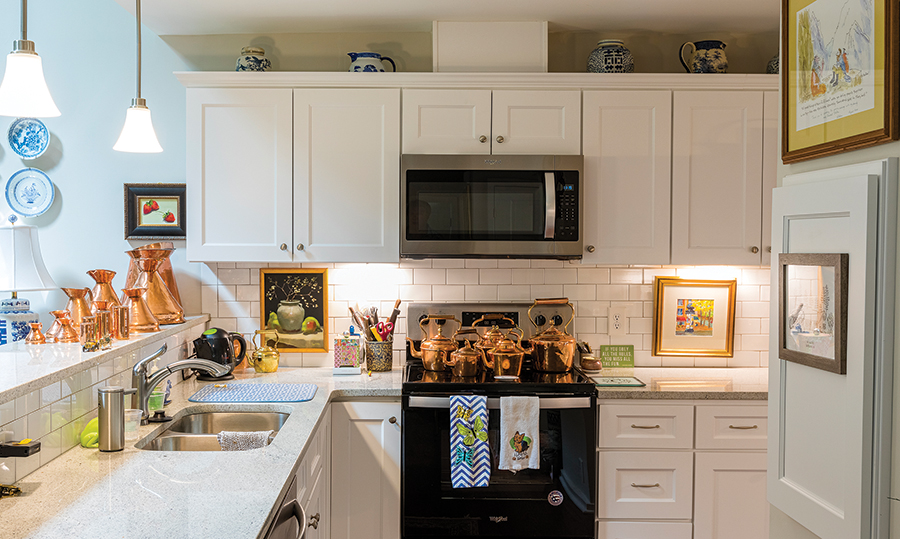 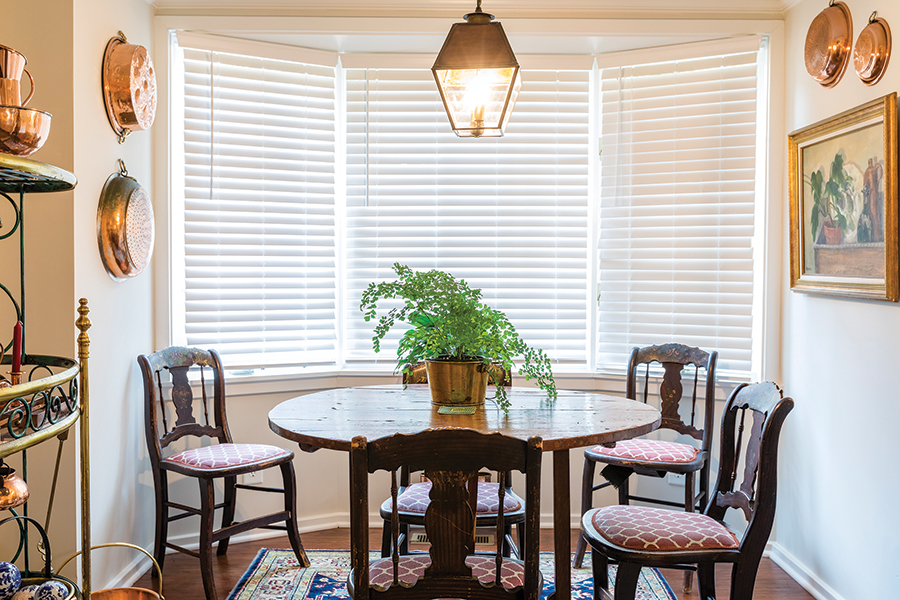 “I’m a blue person,” Jane says, describing her go-to color, not her personality, which remains as vivacious as in the good old days.

Set off by the dark floors, Oriental and other rugs combine Prussian blue with an intense red, picked up by high-back chairs found secondhand for $25 apiece, and reupholstered. The same colors continue into the master bedroom, with Chinese motifs outlined in blue on bed pillows, and lamps made from blue-patterned vases or ginger jars. A window with wide, wood slat blinds runs the length of the room, framing the garden, alive with birds, rabbits and squirrels.

“It’s so wonderful to wake up to that view,” Jane says.

Another view, for her eyes only. In the master bathroom, one wall is covered in photos of the Clarks’ grandchildren. “I spend a lot of time in there, so I like to look at them,” Jane says, smiling wickedly. 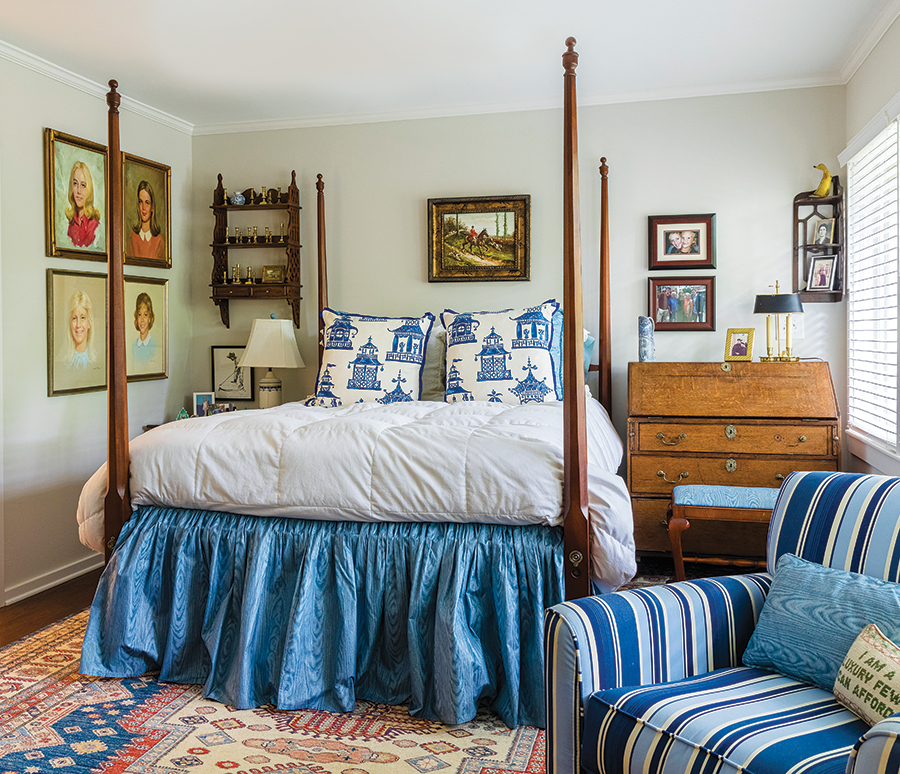 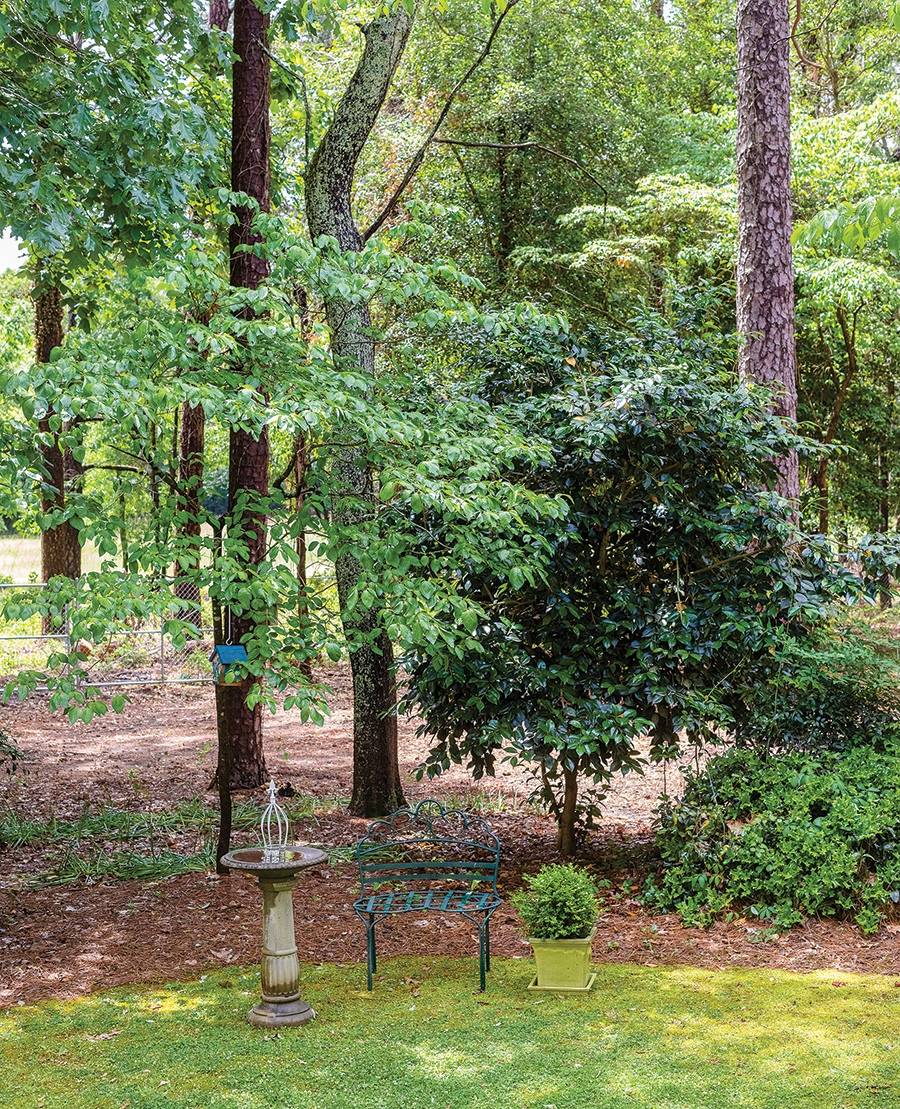 This has to be relocation at its best. Who knows better than AARP?

“Downsizing tends to be more successful when the downsizers are making a conscious decision about how to live their lives,” an AARP publication states. “Considering it an adventure and being part of the process is key to a good outcome. When completed, the sensation of freedom can be quite powerful.”

Jane Clark, dressed in blue and white, flits from room to room pointing out details, recalling the provenance of each precious “thing” without bemoaning the few that were left behind. Long famous for one-liners, she sums up what could have been an angst-filled upheaval in two words,