A manatee, a rattlesnake, and a change of perspective

Putting on a wetsuit is an ordeal, especially if you have never done it before. The process of pulling a thick piece of neoprene up over your legs and torso is exhausting. So it was as I strained with all my might, trying in vain to pull the crushed rubber material up over the last few inches of my father’s shoulders.

Finally, with a few extra twists and turns, I was able get to Dad fully suited up. Pulling the zipper up his back, I turned him around to inspect how well the rented contraption fit him. Standing there on the bow of our aluminum jon boat, Dad looked like an aging superhero with his white hair, all aglow under a bright January sun, contrasting sharply with his skintight black wetsuit.

I handed him a mask and snorkel and he promptly belly flopped over the side of the boat. Dad had never snorkeled before, not even in our backyard swimming pool. I figured this was as safe a place as any for his first try. Our boat was anchored near a large, freshwater spring, many miles away from the ocean, and the calm water was only 8 feet deep.

I had asked Dad to join me for a trip to Crystal River, Florida, to dive with mermaids, something he agreed to without hesitation. Errr . . . I meant manatees. I wasn’t trying to mislead my father — after all, lovesick, old-timey sailors frequently mistook the sea cows for voluptuous sirens. No, I had asked Dad to come along with hopes that he could gain a better understanding of the career path I had chosen for myself.

I have always had a strong love for nature, especially creatures of the ocean. Despite growing up in landlocked Eagle Springs, over a hundred miles from the nearest beach, my passion for the sea was innate, though a chunk of it was certainly inspired by Sunday afternoon viewings of the Undersea World of Jacques Cousteau at Granny’s house.

Dad never fully understood my obsession with nature, but he tolerated it. More importantly, he and Mom always encouraged and supported me, especially when they asked what I wanted to be when I grew up. The answer was always the same — a marine biologist. 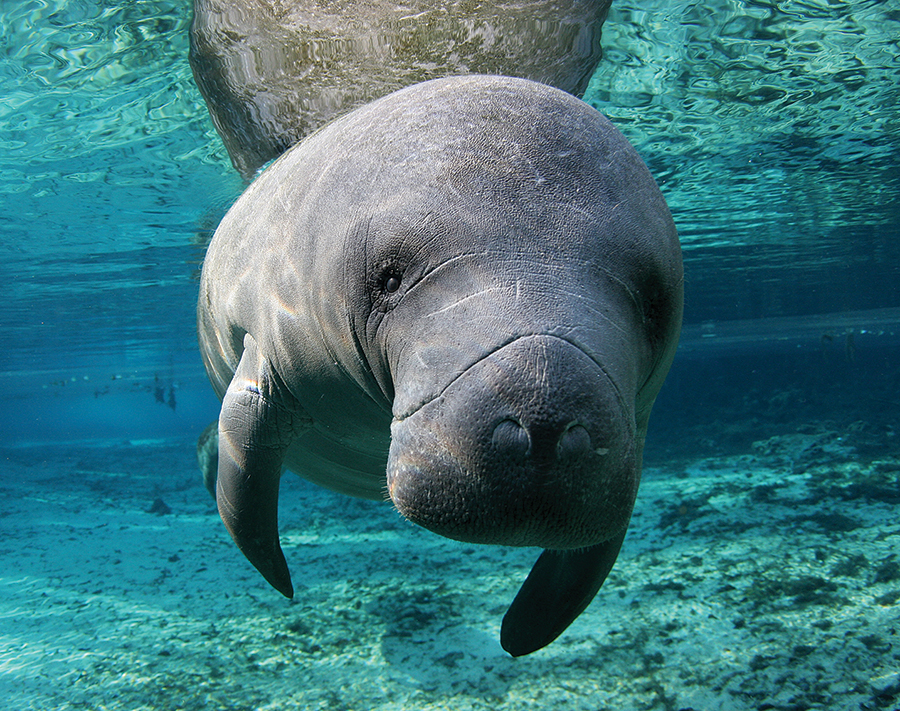 As soon as Dad hit the water, a manatee appeared from out of nowhere. Dad gave an audible “grunt” in his snorkel, obviously surprised by the sofa-sized mammal that had snuggled up next to him. Despite their size, manatees can be quite curious, even playful, and this particular one nuzzled its head up under Dad’s hand, wanting a scratch like some overgrown puppy. (Disclaimer: This interaction took place over decade ago. Touching manatees is no longer permitted.)

As quietly as I could, I slipped into the water, fumbling with the controls of my underwater camera. The manatee, ever curious, kept swimming circles around me and my father. Occasionally it would pause to scratch its back on the anchor line that ran from the bow of the boat to the river bottom. After 10 minutes or so, it swam off. Dad climbed back into the boat, shivering from the cold water but clearly exhilarated by the whole experience. The sparkle in his eye told me everything I needed to know. No longer would he wonder about what motivates his son in life.

The following summer, I asked Dad to join me once again in the field, this time in the Albemarle Peninsula of coastal North Carolina. A wild, sparsely settled region of the state, with immense tracts of farmland surrounded by thick, pocosin swamps full of bears, bobcats and red wolves, the peninsula is one of my favorite places.

As a kid, Dad and I did not spend much time together outside. The family carpet business in West End took up most of his time. He and Mom worked hard, busting their butts Monday to Saturday, through all hours of the day, providing for our family.

It was the first afternoon of a planned four-day trip, when Dad and I encountered the rattlesnake. We came upon the venomous serpent stretched out in the middle of a long dirt road that cut through a dense patch of forest. Its yellow and black scales glistened in the late afternoon light.

I stopped the car about 20 feet in front of the snake and slowly opened the door with camera in hand. Dad, reluctantly, did the same.

I find snakes, all snakes, to be beautiful creatures. Always have. Dad, on the other hand, emphatically does not. An insufferable ophidiophobe, his mantra in life (perhaps many of you can relate) is, “The only good snake is a dead snake.” As a kid, whenever a snake appeared in our rural Eagle Springs yard, Dad always assumed it was venomous and promptly dispatched it with a deft stroke of a shovel. As I matured, I realized that not all snakes seen in the yard were venomous, so I would plead with Dad not to kill them. Sometimes, if I whined long enough, he would relent and allow me to catch and move them unharmed to a nearby patch of forest. 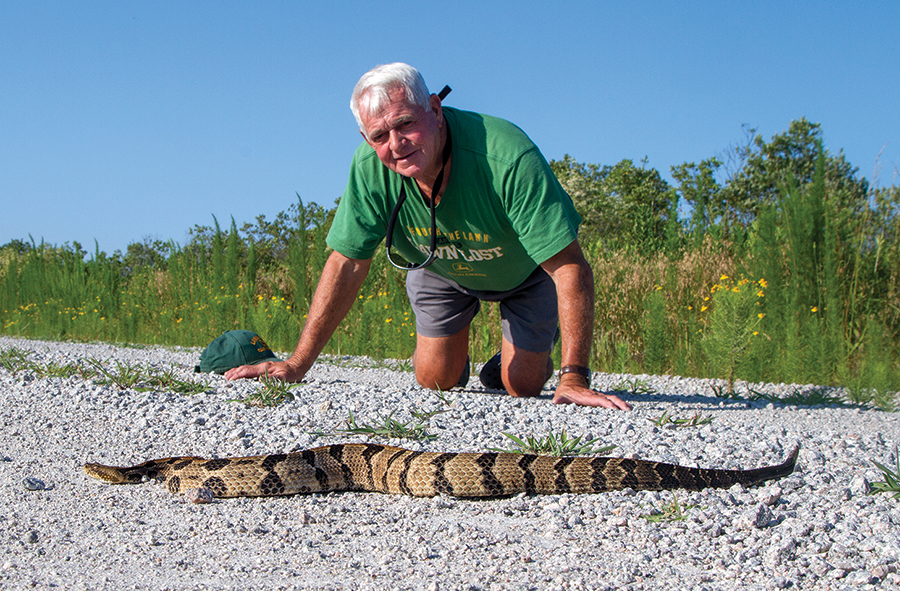 Back at the dirt road, I asked Dad to go and kneel down behind the rattlesnake so I could take a photo that would give a sense of scale (no pun intended) to the 4-foot-long serpent. He cocked his head, raised an eyebrow, and calmly replied, “Hell no.”

I tried to explain that rattlesnakes are not aggressive and that they do not attack people. I explained that most venomous bites occur when people try to kill a snake. I even described how snakes are beneficial to have around and that they eat a variety of pests, many of which carry ticks that harbor disease. This failed to impress and Dad remained steadfast. I figured as much.

Wanting to get a few shots of the snake in habitat, I took out my wide-angle lens and lay down on the dirt road, just out of strike range of the venomous serpent. The rattlesnake remained perfectly still, neither flicking its tongue nor vibrating that famous tail. It was simply biding its time, waiting for us to leave it in peace.

After a few minutes of watching me, Dad, realizing there was nothing to fear, agreed to take a knee behind the snake. As I framed him in the camera, he even managed to crack a nervous smile. I wondered to myself if perhaps Dad was changing his point of view about snakes.

A few months later, I got my answer. Mom called to tell me a most unusual story. While driving down a rural Jackson Springs road, she and Dad encountered a rattlesnake in the center lane. Instead of running it over, Dad pulled the car over to the shoulder of the road, got out, and fetched a tree limb. Stopping oncoming traffic, he coaxed the venomous reptile off the road into the safety of the woods, all the while explaining how beneficial snakes are to the environment to Mom and the other exasperated drivers.

I have never been more proud.  PS