Ghosts Among the Pines

The white squirrels of Rockingham

Hop on U.S.  in Aberdeen and take it south, out of town. Cross over the floodplain of Drowning Creek at the Richmond County line and continue through the small hamlet of Hoffman, past the majestic stands of longleaf pine and wire grass of the Sandhills Game Land, and the old NASCAR motor speedway. Approaching the city limit signs of Rockingham, take a right turn into any of the suburban neighborhoods bordering the road and keep your eyes peeled. Among the patchwork of ranch-styled houses, manicured lawns and forest edges, you might just see a ghost.

It was my late uncle, Lamar, who first told me about them. The ghosts in question are part of a unique population of the grey squirrels that call this Sandhills town home. The squirrels here are not your average run-of-the-mill bushy-tailed rodents that are the bane to backyard gardeners and bird feeders everywhere. Many, instead, sport unusual, brilliant, snowy white fur coats and feature dark blue eyes.

I first set out to see the white squirrels of Rockingham one cold December day over 12 years ago. About a mile off U.S. 1, along a small section of road bordered by large oak trees and old homes, I counted a dozen white squirrels scattered here and there among the grassy yards. One yard in particular, with a large birdfeeder mounted atop a wooden pole next to a window of a single-story brick home, held four individual white squirrels.

After I stopped and rang the doorbell of the house, a kind, soft-spoken elderly man met me at the door. When I requested permission to photograph the white squirrels in his yard, his eyes lit up. He remarked that the white squirrels held a special place in his heart, reminding him of his late wife, who had filled the birdfeeder next to their living room window with sunflower seeds every day just so she could watch their antics. It was a tradition he had continued long after her passing, and it thrilled him that someone else had taken an interest in “her” squirrels.

“You go ahead and photograph the squirrels to your heart’s content,” he said.

With that, I lugged my camera gear out of the car, sat down quietly at the edge of the yard, and waited. Cardinals and chickadees, typical yard birds for the area, flew back and forth from the birdfeeder to a hedgerow, their incessant calls breaking the silence of an otherwise quiet winter’s day. 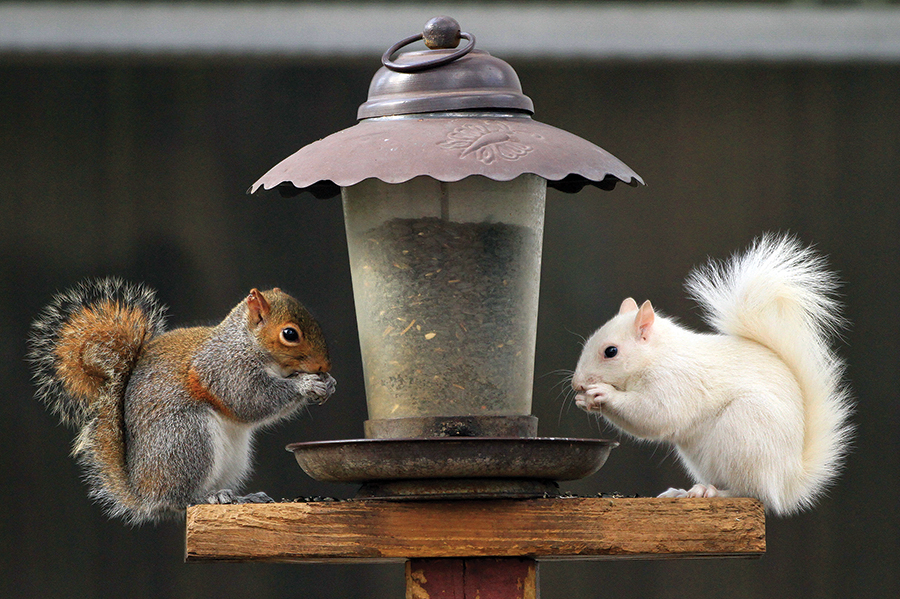 Before long, a luminescent white squirrel emerged from a hollow cavity 20 feet off the ground in a robust oak tree along the edge of the driveway in the front yard. Walking out onto a long vertical limb, it made a flying leap onto a nearby powerline that stretched across the width of the front yard. Like a miniature tightrope walker, the squirrel nimbly ran the length of the powerline and jumped off onto a pine tree. Scampering down the trunk, it hopped to the ground and raced over to the birdfeeder next to the window.

Watching it reminded me of another, more celebrated North Carolina population of white squirrels. Each spring, Brevard, a quaint town nestled within the mountains of Transylvania County, holds a weekend-long “White Squirrel Festival,” attracting thousands of tourists from across the state. The town is so enamored with their white squirrels that it created a sanctuary for the pale mammals, making it illegal for anyone to hunt, trap or kill one within city limits.

Stark white animals have captured the imagination of mankind for millennia, and figure prominently in myth and legend. Many Native cultures across the globe view albino animals as deities or omens of good luck. Albino animals feature prominently in popular culture as well, perhaps none more so than the great white whale pursued by the obsessed Captain Ahab in Herman Melville’s literary classic Moby Dick.

Back in Rockingham, a normal-colored grey squirrel came bounding across the yard and hopped up onto the bird feeder across from the white one. Together, they enjoyed mouthfuls of sunflower seed as the afternoon sun drifted across the Carolina blue sky. The yin and yang contrast between the two provided a wonderful photo opportunity, and I raised my camera. Framing the two squirrels in my viewfinder, I noticed the elderly man sitting quietly inside the nearby window admiring them. He was smiling.

Pressing the shutter, I smiled back. PS