Legion of the Night

The beauty of moths

Butterflies get all the love. All around the world, festivals are held in their honor. Entire gardens are planted specifically to attract them. Poems praise their beauty. Kids even dress up as butterflies for Halloween.

Moths, on the other hand, are frequently overlooked and ignored by most people. If noticed at all, moths generally get a bad rap. Gardeners despise hornworms, the large caterpillars of sphinx moths, feeding on tomato plants in the backyard. Gypsy moth caterpillars, capable of defoliating entire trees, are the bane of property owners throughout areas of the Northeast.

Even in popular culture, moths are frequently associated with superstition and death. The calling card of the serial killer from the popular 1990s movie Silence of the Lambs was the cocoon of a death’s-head hawkmoth (yes, there is such a thing) placed inside the mouths of his victims.

About the only time moths have received any positive press is when Mothra dragged Godzilla by the tail out of Tokyo. 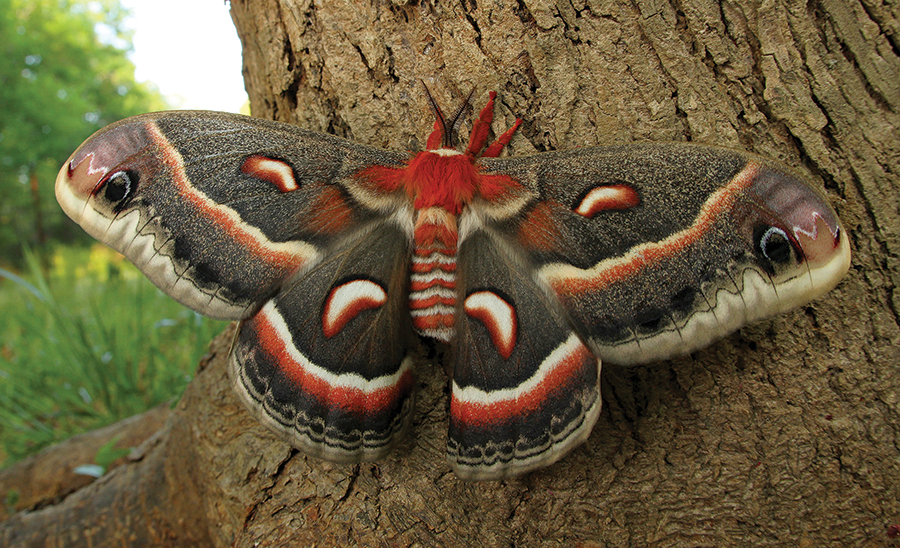 Last July, on a hot and humid night, I pulled into the parking lot of a brightly lit gas station along the edge of the Dismal Swamp in the northeastern corner of the state. It was during the height of the pandemic, and few other cars were around. In need of caffeine, I stepped out of my vehicle and walked along the side of the building toward the front door. Casually glancing up, I was stunned to see a large luna moth clinging to the side of the building, its striking lime-green wings contrasting sharply with the white paint.

The gentle luna moth is the teddy bear of the insect world, sporting a plump, furry body, feathery antennae, and a pair of 3-inch-long sweeping tail streamers. It is among North Carolina’s largest and most spectacular moths. I was so pleased to see one that I casually mentioned it to the station’s clerk while paying for my beverage. A blank stare was my only response. Finally, she asked quizzically, “You saw a what?”

I said again, “There’s a luna moth outside your front door.” Blank stare once more.

“Oh,” said the clerk with a nervous smile. “Have a nice night.”

Most people think of moths as drab and boring. It is true that many moths possess muted shades of brown or grey colors, but a surprising number are as colorful and intricately patterned as any butterfly. Take, for example, the giant leopard moth, common to many parts of North Carolina. Looking like a flying Dalmatian, it is a large, bright white moth covered in an array of black polka dots. An entire family of moths known as underwings sport drab tree-bark-patterned forewings and brightly colored hindwings, which they only flash when frightened by a predator. 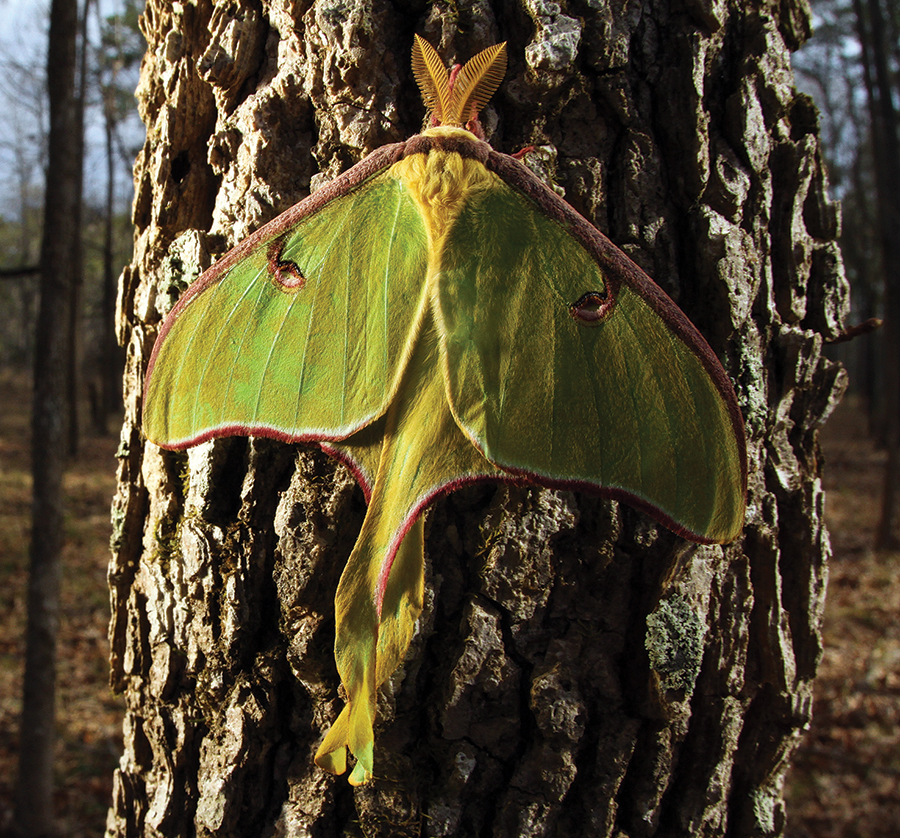 Luna moth (Actias luna), freshly emerged from its cocoon in early spring in the Lowcountry of South Carolina

Speaking of underwing moths, many possess common English names reflecting a marital theme, a quirky tradition started by Carl Linnaeus, the father of modern taxonomy. Among the more descriptive ones are the tearful underwing, the betrothed underwing, the dejected underwing, the divorced underwing, and the oldwife underwing. Clearly, entomologists have a sense of humor (and perhaps one too many beers) when it comes to naming moths. Or perhaps they are just in need of a good marriage counselor.

Moths are among the most diverse groups of animals on the planet (surpassed only by beetles), with over 200,000 species (and counting) found worldwide compared to just over 17,000 species of butterflies. They come in an infinite variety of shapes and sizes. Many of our state’s smallest species, known as micro moths, could easily fit onto the head of pin. The largest species in North America, the cecropia moth, possesses enormous wings that stretch 7 inches from tip to tip, making them larger than many species of bat. A member of the spectacular silk moth family, the cecropia (and the luna moth mentioned earlier) does not feed as an adult and relies on stored energy from its caterpillar stage. As such, the cecropia lives for only a few days, leaving it precious little time to find a mate and perpetuate the species.

Unlike the showy silk moths, many night-flying moths are masters of disguise and closely resemble bark and leaves to help them blend into their surroundings during the day. Some even look like bird droppings.

Not all moths are nocturnal. Many fly during daylight hours. Those that do tend to mimic other insect or animal species, such as bees and wasps. One well-known day-flying moth is the hummingbird clearwing, which mimics the size, shape and flight pattern of the ruby-throated hummingbird. Like its namesake, it is frequently observed hovering over flowers in urban gardens. 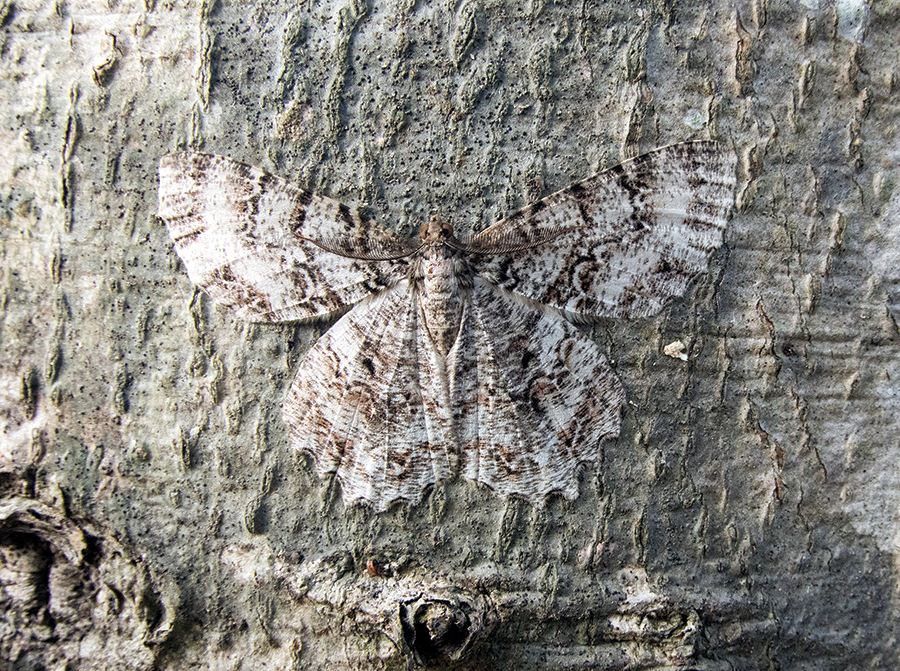 Just this past April, I was admiring a cherry tree in full bloom in a friend’s yard when I did a double take. What I initially thought was a bumblebee hovering over a blossom above my head turned out to be a moth known as Nessus sphinx. With two bright yellow bands wrapping around a black abdomen, the moth was a perfect replica for the stinging insect. As I followed it from blossom to blossom, I realized the rapid wings of the moth even sounded like the buzz of a bumblebee.

Like bees, moths are important pollinators of many flowers and crops. Throughout all their life stages, from caterpillars to adults, moths serve as a critical food resource for many birds and other animals. Studies have shown that moth caterpillars are the preferred food for nesting birds, such as eastern bluebirds, as they are both easy to digest and full of protein.

Unfortunately, moths have suffered serious declines in their populations due to habitat loss, light pollution, and the extensive use of pesticides on the landscape. Their ecological importance and the impact that they have on the world around us is difficult to understate.  PS

His favorite book is Where the Red Fern Grows by Wilson Rawls.