Pretty as a Picture

Monet painted from a studio adjacent to his country home in Giverny.

Van Gogh rented four Spartan rooms in Arles, which he immortalized on canvas.

Cézanne built a studio on farmland, in Provence. All painted fruit and flowers in the still life mode.

During the late 19th century, the ateliers of a hundred starving artists dotted the Left Bank. How they would covet Carmen Drake-Gordon’s set-up: a 100-year-old farmhouse converted as a studio with 14-foot windows facing north, for consistent light. Close by, a new house that appears 100 years old, with elongated porch, furnished in country antiques. Beyond the house, an idyllic pond, where Muscovy ducks swim and catfish jump for treats. A shady chicken coop; a fenced yard for three goats who earn their keep by clearing the wisteria. A red barn workshop where Carmen’s partner, Wade Owens, a multi-skilled retired Army officer from Iowa, builds, repairs and blacksmiths. Between the studio and farmhouse, raised beds yield kale, peppers, tomatoes, beans, eggplant, paw-paws and jujubes. Then, for whimsy, an adorable outhouse with running water built by Carmen’s children, instead of installing a septic system for her studio.

“I call it my Pee Palace,” she says and laughs.

All this surrounded by 15 acres of grass, woods and wildlife where she walks with Dean, a devoted mixed-breed dog she rescued minutes before euthanasia.

This homestead’s proper name is Oak Hollow Farm and Studio, and its tall, blonde, artfully dressed (“funky,” is her description) occupant, a grandma who is, in the best sense, a piece of work. From this studio Carmen — inspired by her surroundings — creates and sells paintings nationwide through virtual and other galleries. She hosts workshops that include lunches of garden produce served at her stretch table. But unlike Monet, Van Gogh and Cézanne, her portraits and still lifes follow classical realism as practiced by Dutch and Flemish masters — a technique that’s uber-photographic, three-dimensional, and eminently artistic. 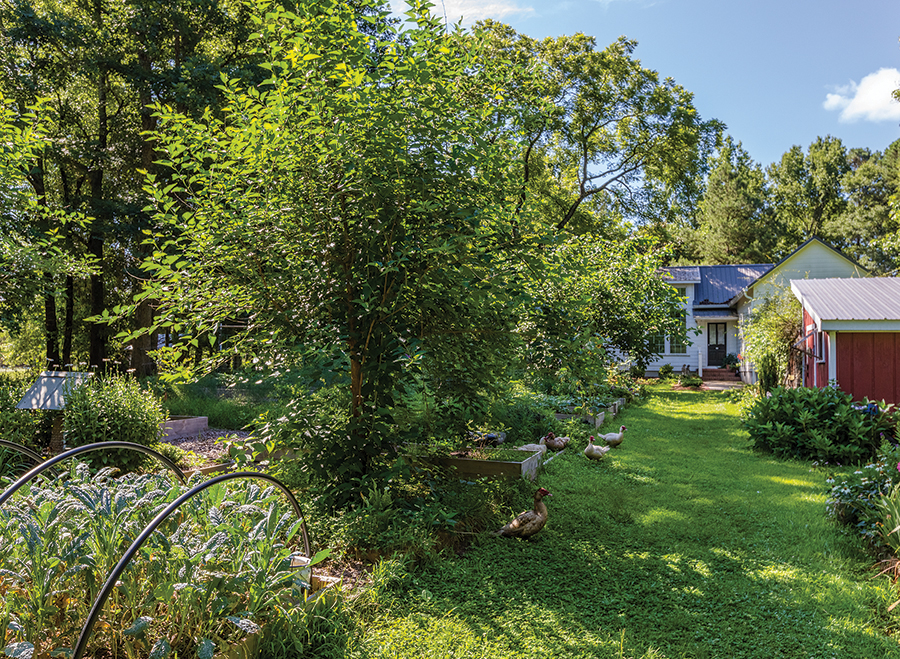 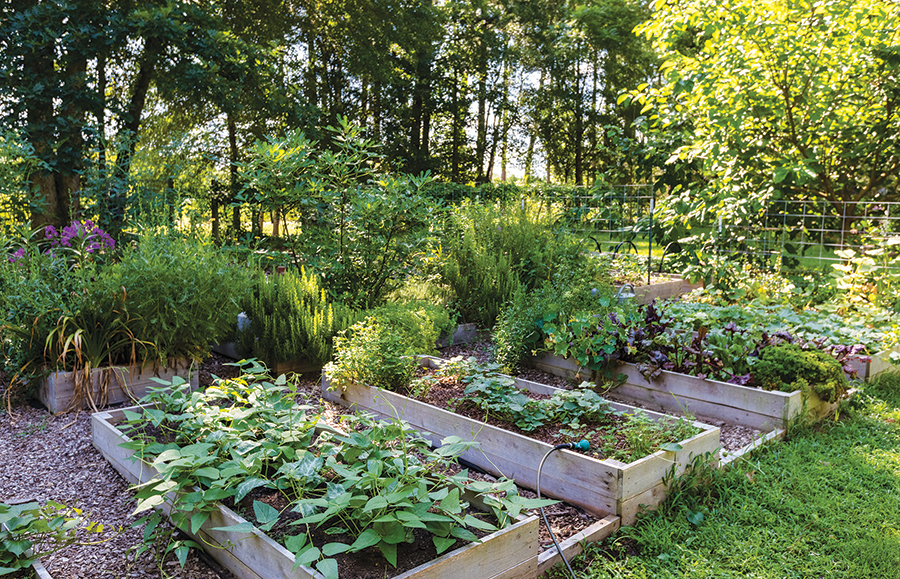 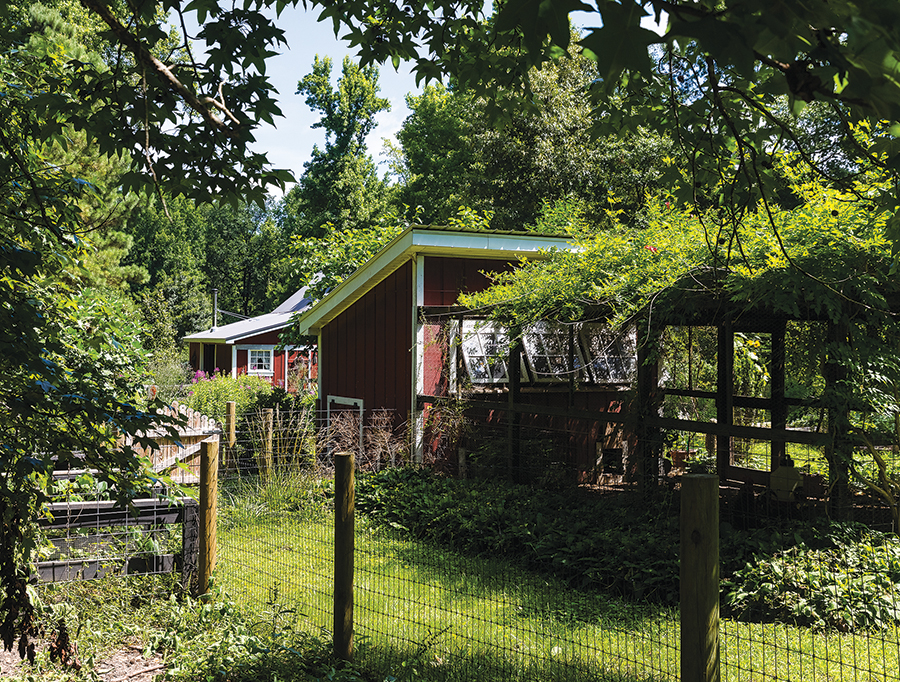 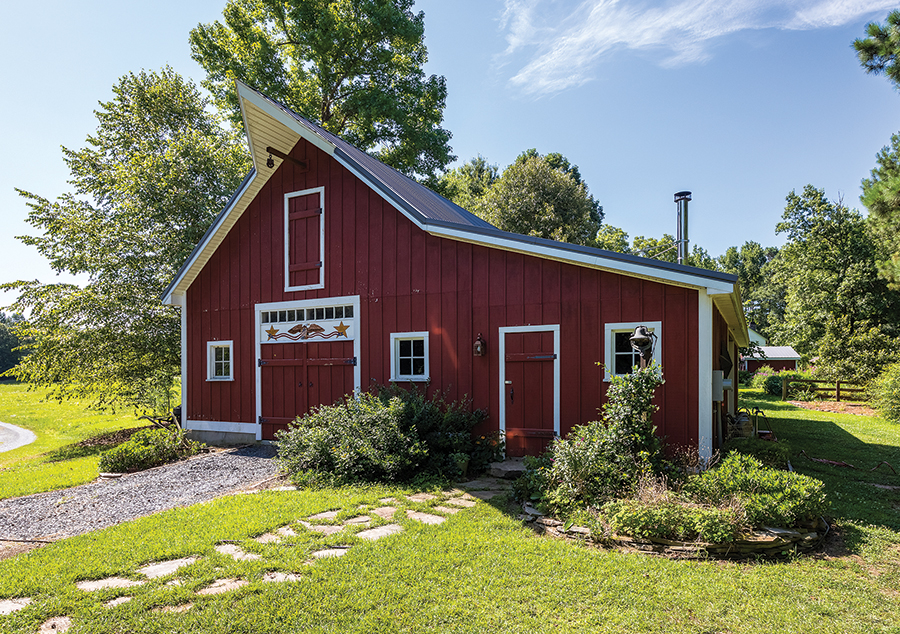 Carmen grew up in Maine and Connecticut. Her artist mother provided lessons for the early-bloomer. “I was oil painting by 12.”

Modernism? “I wasn’t into that.”

Carmen married young and “dabbled” while raising three children. The family settled in Southern Pines in 1986, when her husband was stationed at Fort Bragg. Carmen remained here after he was killed in Mogadishu, in 1993. “The military became my family.” She pursued a love for Italian religious art, also appreciating “things — especially utilitarian things. “I find beauty in them.” Studying with Jeffrey Mims at the Academy of Classical Design in Southern Pines, and later with local artist Paul Brown, channeled and refined her talent.

Every artist longs for a studio. “I like to surround myself with a peaceful, calm atmosphere where I feel a connection with what I create.” That includes whatever exists outside her studio door.

She and Wade looked for land. A waterscape would be nice. The parcel they found had potential.

This land, known as the Short family farm, came with a rickety farmhouse (once a used bookstore), and a double-wide, also in disrepair. They bought the acreage in 2001, cleaned up the double-wide and lived there until completing the house in 2004. The old farmhouse-bookshop, now with heat and AC but no running water, became Carmen’s studio in 2018. 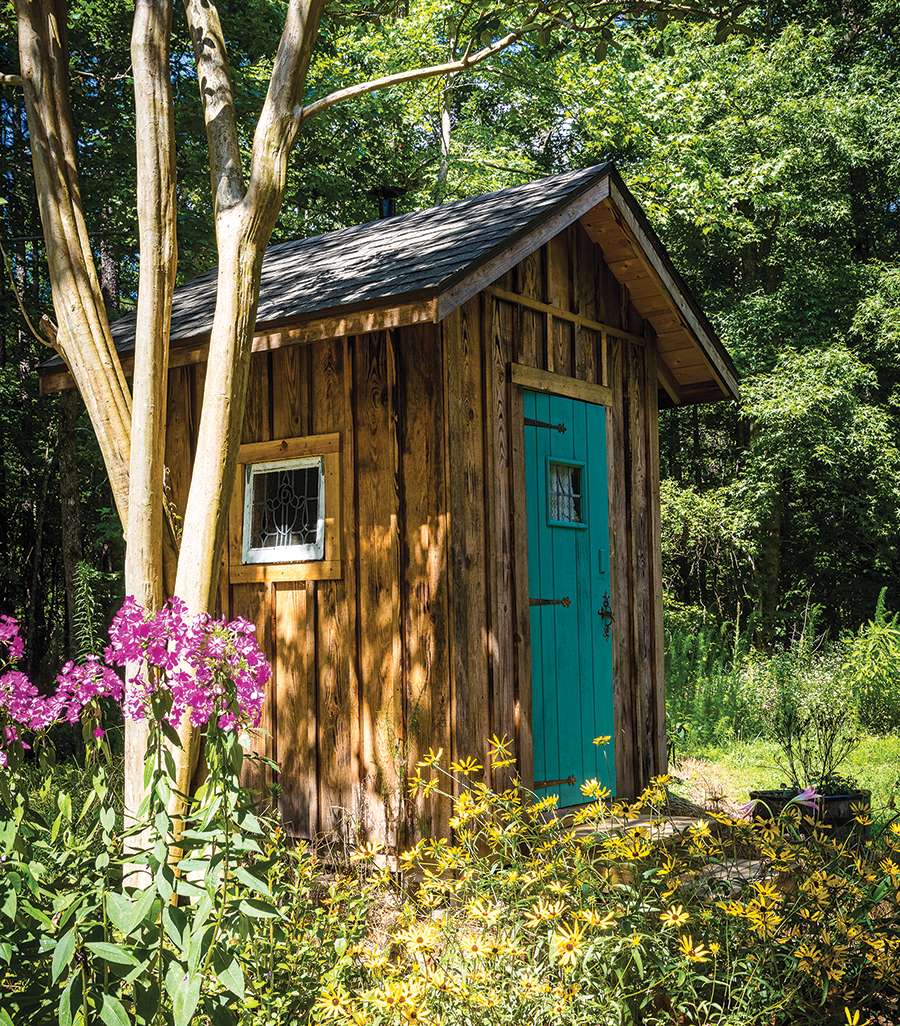 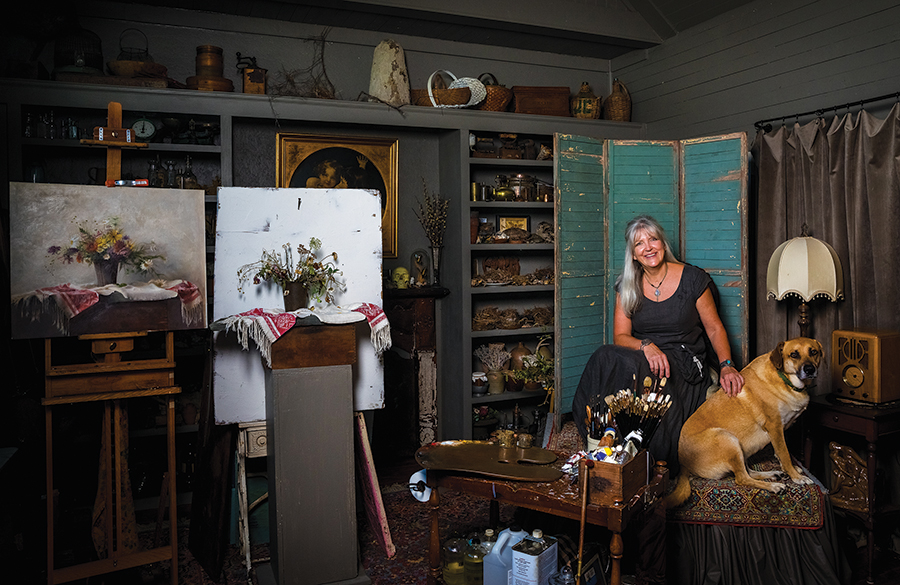 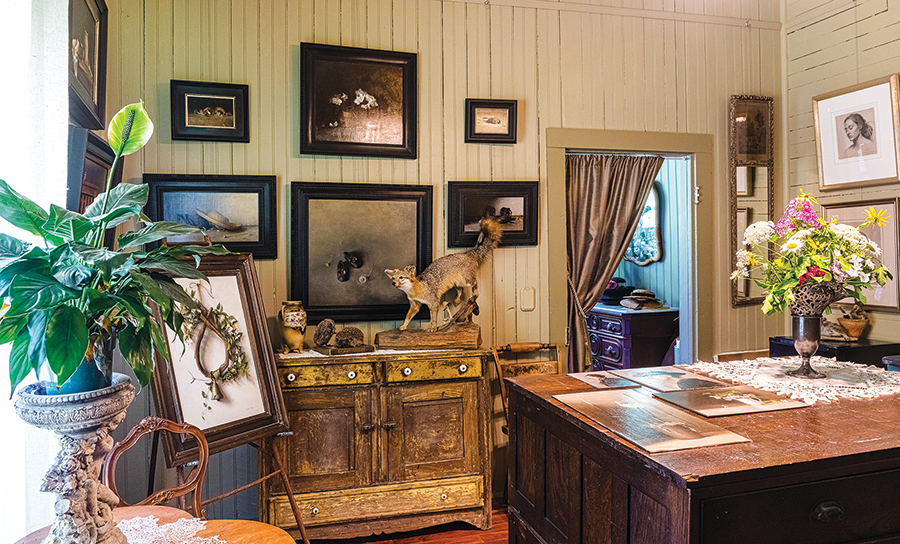 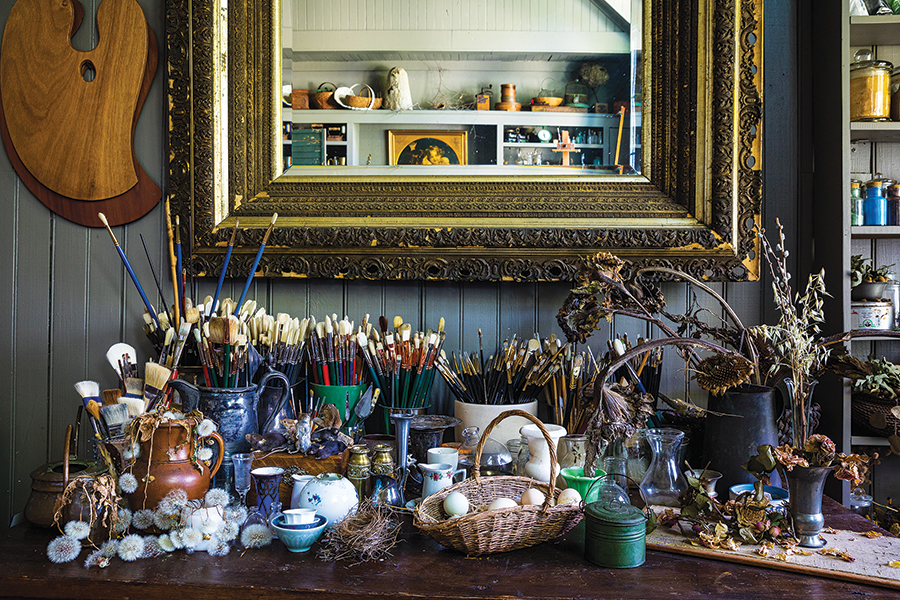 The main house — white clapboard, two stories with full basement, more than 3,000 square feet — spreads longitudinally across a knoll, with manicured grass sloping down to the pond, where Carmen and Wade have constructed a low stone wall and seating area. Their porch may appear Southern but the interior hums Yankee Doodle. Carmen found a set of plans that were adapted to include 10-foot ceilings and so much more. Construction took 18 months, but when it was finished, the house, with its unusual floor plan, won a Moore County Home builders Association Award.

Just inside the front door stretches a dining table easily seating 10, made by Wade. The mismatched chairs include old-timey high chairs for Carmen’s two grandchildren. This long, narrow room with angled fireplace began as the sitting room, with a smaller dining room off to the right. Carmen had no trouble switching designations to accommodate their extended families for holidays. Both rooms contain multiple armoires, settees, candlesticks, lamps, shelves, tables, paintings and enough historical artifacts to warrant a catalog. Some are remnants of Carmen’s antique shop, C.R. Drake Mercantile in Cameron. Many pieces showcase her inventive touch, like a ladder repurposed as a quilt rack.

“I’m not comfortable without knick-knacks,” Carmen explains. Being surrounded by old things satisfies a need: “I imagine how many people touched them. I connect with that.”

The elongated dining room ends at the kitchen, visible from the front door. Creating a century-old atmosphere around modern appliances can be tricky. Carmen chose a dusty yellow for the footed carpenter-made cupboards with black metal pulls to match the black soapstone countertops and protruding island, with breakfast bar. One wall is fitted with a combination of open shelves and tall cabinets. An antique spice jar rack with tiny drawers labeled in German says volumes about Carmen’s attention to detail. She didn’t stint on moldings, window frames and beadboard ceilings, either: “These little touches make a big difference,” as do square nails in the wide-board knotty pine floors. To make up for the splurges, “I painted the inside to save money.”

On the counter, a gallon of blueberries picked from nearby bushes speaks of the couple’s culinary requirements. Carmen and Wade both cook. Whatever they don’t grow comes from local farmers markets.

The main floor is bisected by a back hallway leading to the master bedroom, where Carmen has positioned a king-sized bed against a smaller wrought metal headboard, flanked by tall, narrow windows. The effect: airy, bright, comfy, simple. Each bathroom vanity originated as a bureau. One loo actually has a pull-chain toilet with high wall-mounted tank.

Upstairs, a guest bedroom with parallel twin beds is a Nantucket B&B look-alike. Wade uses a second upstairs bedroom as an office. For hall decor, Carmen hung a pioneer woman’s dress and coonskin hat like those worn in the Revolutionary War re-enactments she and Wade attend. 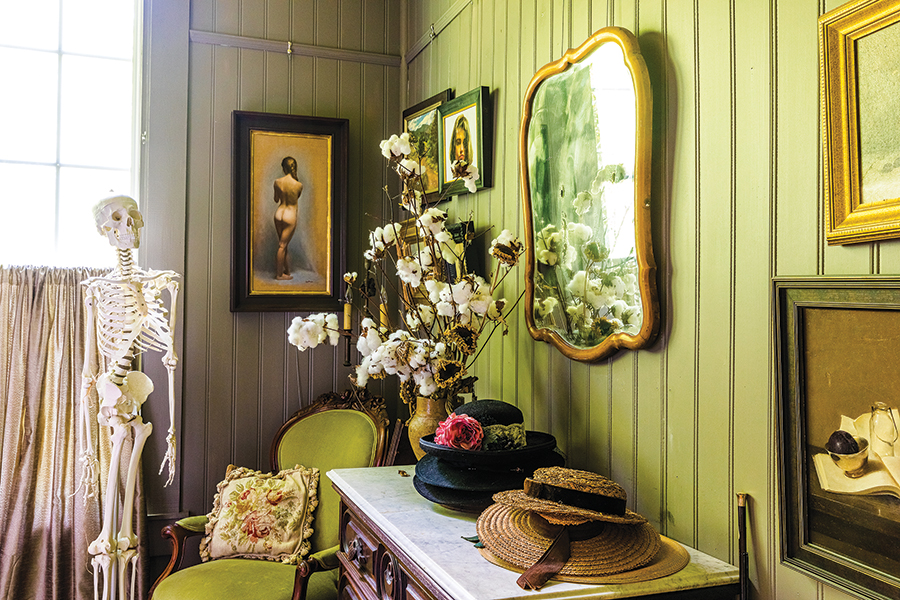 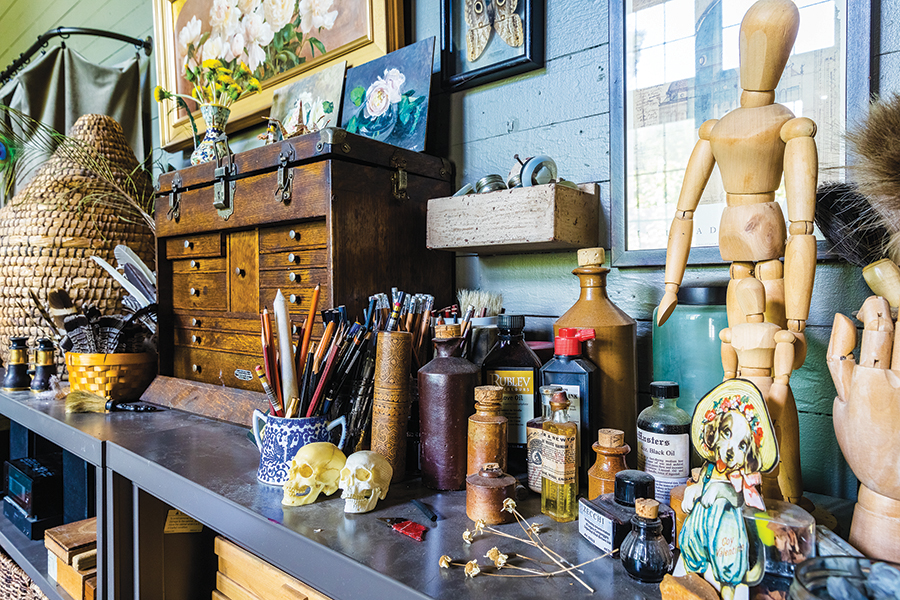 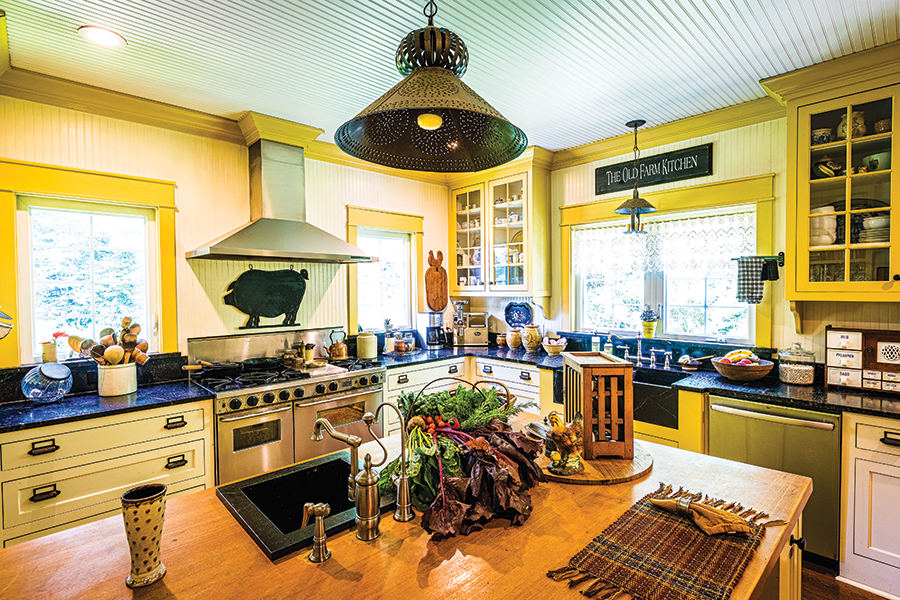 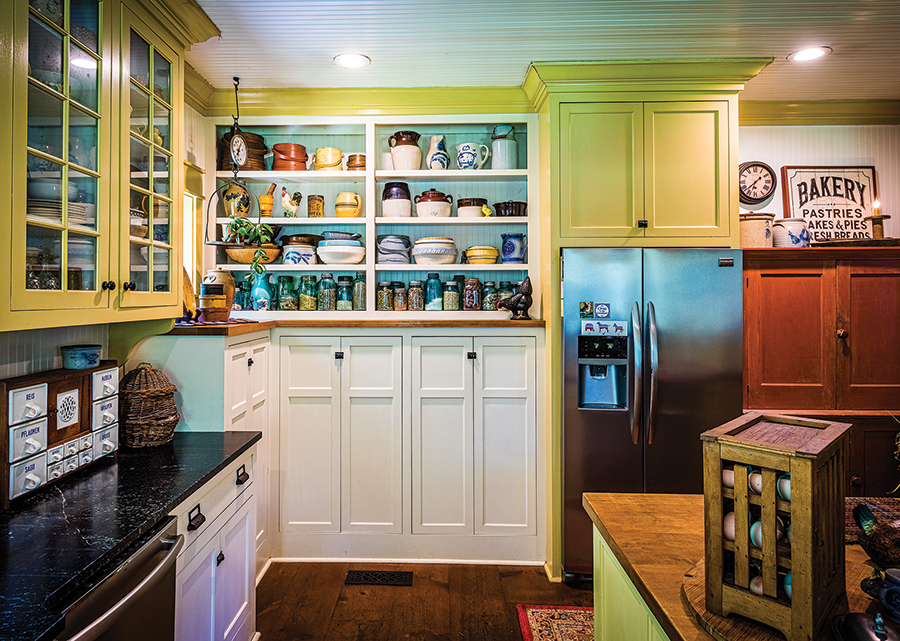 Carmen’s studio, a 50-yard stroll past the gardens, chickens and goats, represents another world: “It’s definitely my space. Everything in there speaks to me.” The interior walls made from horizontal boards painted green were left intact, but the ceiling came down to make space for windows soaring into the exposed attic, since, for an artist, proper light is crucial. Her workroom, cluttered with paints, brushes, props, paintings, a 1940s radio, a small pedestal on which stands a fancy chair, feels more decadent Parisian than rural Carthage.

As with Cézanne, no one enters this studio without an invitation.

Even more decadent, adjacent to the workroom, a parlor with floor-to-ceiling shelves spills over with art volumes, some stacked on coffee and side tables squeezed between fireplace and white sofa. Victorian was Carmen’s intent; however, the crystal chandelier reminds her of French chateaux. “This is my thinking room, my art cave, my girly space. I look through the books for inspiration, ideas.” She also teaches and entertains other artists here.

Beyond the parlor, a workroom for framing paintings and storing costumes is guarded by a skeleton, which helps plot articulation when painting the human body.

Carmen Drake-Gordon has achieved a rare confluence where art and life live peacefully, side by side. This artist paints the flowers she picks and birds’ nests she finds; she eats the produce she grows. She lives alongside friendly animals and soothing water. She is surrounded by things and people she loves, who love her back. She works hard, but on her own terms and in her own space, rewarded, fulfilled — a painting come to life.  PS 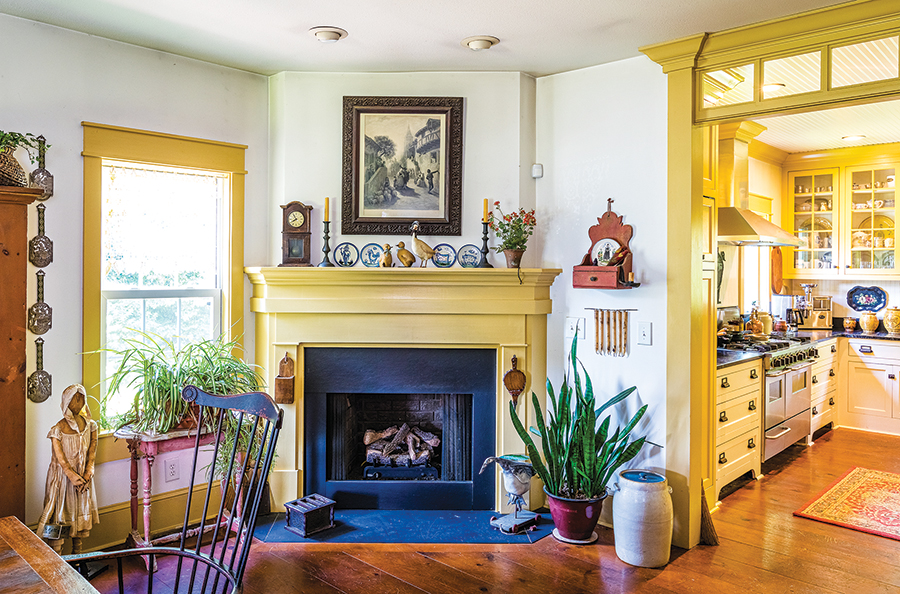 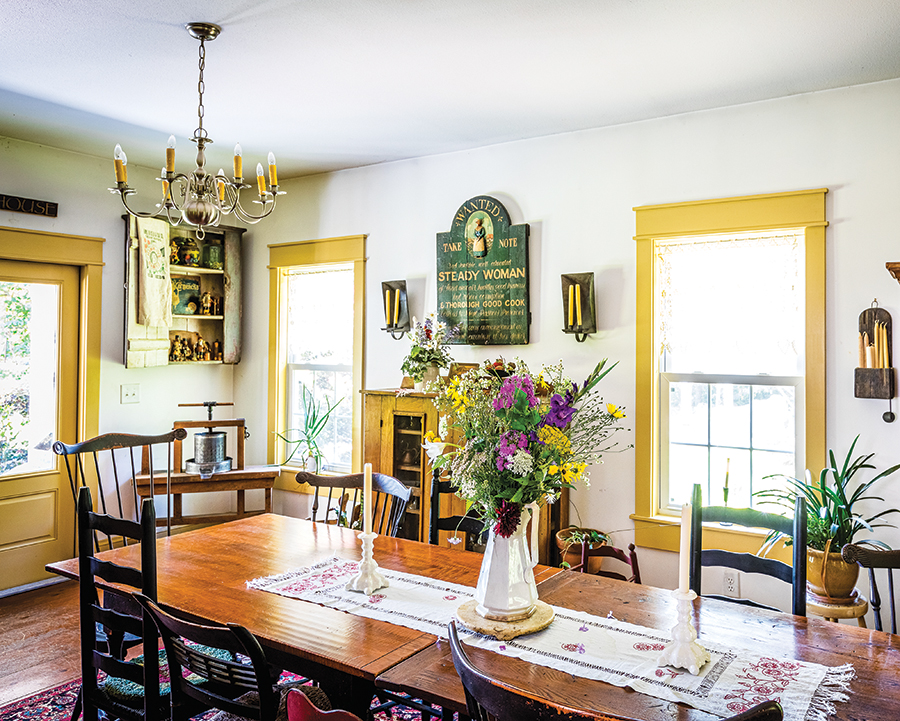 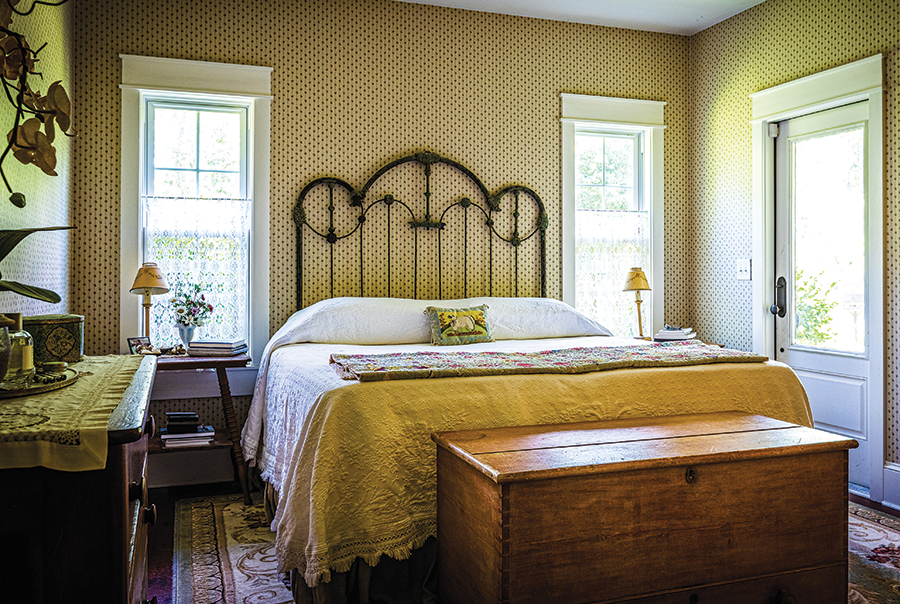 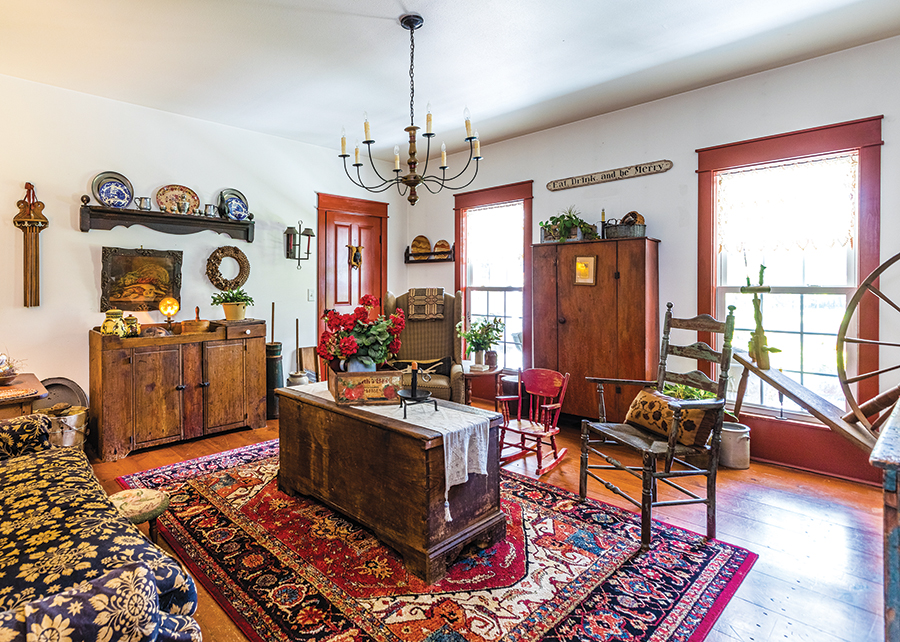