In 2007, just as the world was spiraling toward financial ruin, Greensboro sculptor Jim Gallucci received the largest commission of his career. The city of Raleigh selected him to construct four light towers to sit on either corner of downtown’s City Plaza in an attempt to redefine the empty space in front of the old Civic Center.

However, as the reality of the global financial crisis set in, Gallucci was certain the project would be pulled; but leaders in Raleigh decided to move ahead. In the fall of 2009, City Plaza, complete with Gallucci’s four 65-foot light towers bedecked in steel oak leaves, opened to the public. City officials hoped the plaza would serve as a “public living room” that would host concerts and events while attracting organizations from around the country that were searching for event and reception space. The plaza project was part of the now completely revitalized area of Raleigh’s Fayetteville Street, and towering above all the new businesses, concertgoers and tourists are Jim Gallucci’s glowing behemoths.

Raleigh proved that an investment in the arts could lead an economic revitalization. Gallucci was not surprised that the city’s bet paid off. “The arts are always the catalyst,” he says. “We’re the stick in the stream. Next thing you know there’s a leaf that’s caught by the stick, and before long the stick has gathered an entire island around it.”

Jim Gallucci’s enormous studio — which he admits to thinking of less as a studio and more as a tool that assists in his art — sits just south of downtown Greensboro. Going off Gallucci’s own metaphor, his studio could be described as an island that has gathered things over the years: sculptures of dizzying heights and varying colors; scraps of metal from local salvage yards; beams from the World Trade Center; and people from around the state interested in anything from sculpture to metalworking to glassblowing to having a cup of coffee and chatting. This is exactly what Gallucci hoped this space would become after opening the studio in 2006, not only for him but for the collective community of local and statewide artists of which he is part.

Gallucci’s collective approach is quickly made apparent when you spend time discussing art with him; you will discover that he consistently speaks in the collective first person we.

“We’d been in the old Civil War rifle factory on East Washington in downtown Greensboro for 21 years,” he says. “There were holes in the ceiling. The floors weren’t strong enough to hold the sculptures we were making.” He smiles, takes a sip of his coffee. “We knew we needed four things from a studio: We needed plenty of space. We needed heat. We needed an office. And we needed a bridge crane.”

You would not know it now, but there were times when Jim Gallucci felt more like that single stick in the stream than the island that would gather around it. As a working artist, he had spent years teaching at the college level, but that came to a halt in 1986, when the University of North Carolina Greensboro did not renew his teaching contract after nine years in the classroom. He had a decision to make: Should he and his family leave Greensboro in search of another teaching job, or should they stay in the community, where they had forged relationships for nearly a decade?

He and his wife made the conscious decision to stay. “We’d made a lot of friends,” he says. “We had a community. We knew a lot of people in the fabrication business, and we’d trade sculptures for steel. You don’t buy those relationships; you assemble them during your life.”

After leaving the classroom, Gallucci decided to put his faith in his local community, and he decided to keep his faith in his art. “I took unemployment for six months, and I called it my arts grant. I went in my studio every day like a worker at 8 a.m., and I’d work until 4 p.m. I worked every day in that studio, and we were able to trade for steel, and we made three good sculptures during that six months and tried to get into shows.

“Those three pieces we made? All of them were sold, and two of them ended up in Brisbane, Australia. I suddenly went from an unemployed art teacher to an international sculptor.” 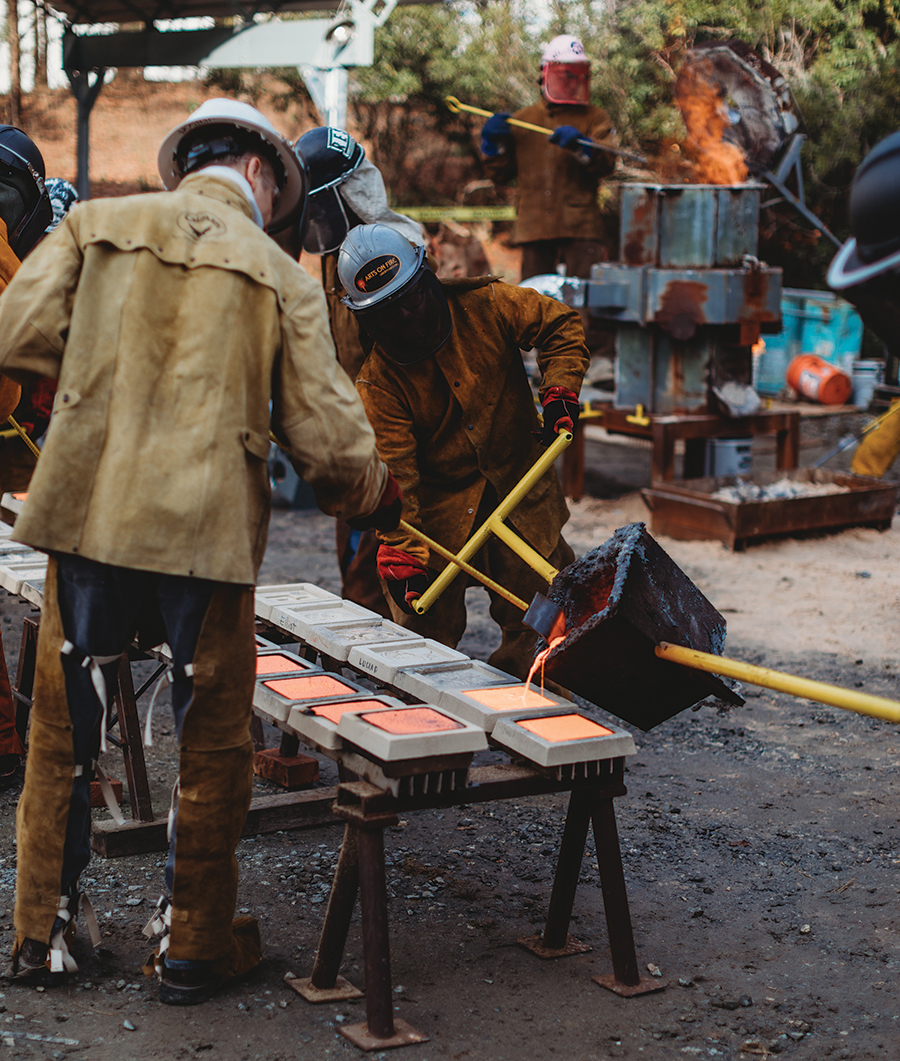 Gallucci’s sculptures began to pop up around Greensboro, then around the state, then around the country. He is perhaps best known for his gates and arches, especially the Millennium Gate in Greensboro’s Government Plaza, a project that found 17 artisans creating 106 icons that represent major figures, moments and movements from American history. The icons are affixed to the enormous arch and comprise the gate at its center. Viewers are able to both witness history and pass through it, and that interaction is vital to Gallucci’s vision.

“With gates, it’s easy to get into the art,” he says, “literally and figuratively. I try to get people to enter the work, to engage with it.”

Gallucci also gives people the opportunity to engage with their own artwork several times a year when he opens his studio to host a public iron pour. Hundreds of people show up in the early afternoon, many of them with small sand casts on which they will use any number of tools to etch a symbol or a name or an image that will then be cast in iron later in the day.

People come not only to pour iron, but to work with blacksmithing tools or to try their hand at glassblowing. Others come for the live music or the hot food that is served. The noise of the conversations and music and hammers rises into a pleasing din that fills the enormous studio space and pours outside, where men and women in masks and leather gloves and aprons are stoking the foundry and melting metal into what looks like bright orange lava. Jim Gallucci is there, talking to old friends, making new ones, offering words of encouragement to someone who is trying their hand at metal casting for the first time.

As the sky tips toward dusk, the scene is otherworldly. Sparks fly. Flames reach into the air. Metal is turned into liquid. The vague notions of creativity that people arrived with are slowly hardening into shape.

“Creativity happens when you experience something you’ve never experienced before,” Gallucci says. “The elements: the sand, the dirt, the heat; it’s almost primordial. People may not become iron casters after this, but that’s not the point. It’s igniting other things, inviting other ways to look at the world. That’s what art inspires.” 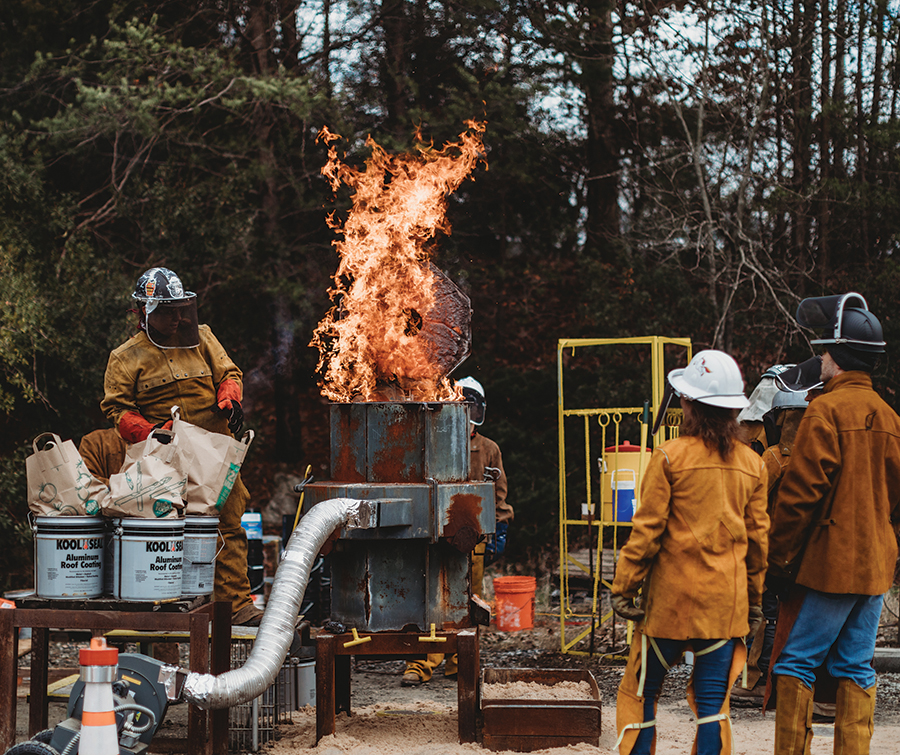 What does Jim Gallucci hope his art inspires? He thinks for a moment, the light from sparks and flames glinting in his safety glasses, which he wears casually, the way other people wear sunglasses or bifocals. “I hope I’m perpetuating ideas, goodwill, community, sense of purpose, reflection. If you’re doing that with a piece of art, you’re doing OK.”

No man is an island, right? Well, perhaps Jim Gallucci is.  PS