Story of a House: Still a Castle

Dunross holding the fort in Knollwood

On Feb. 15, 1929, The Pilot featured seven houses built by prominent families in the Knollwood residential enclave, a development that followed the opening of Mid Pines in 1921 and Pine Needles in 1927.

Why let Pinehurst have all the glory?

When Donald Ross delivered to the builder the plans for his new house . . . he went far beyond the concepts of a $10,000-$12,000 house and ordered what would look like a castle. In after years the house will become a shrine . . . Ross is the Mohammed of the golf cult. His home in Knollwood Heights, overlooking two of his finest creations, will be sought out by devotees for years.

However, since Ross sold the house in 1931, one legend suggests that he built and occupied it briefly to call attention to Knollwood, thus increasing sales.

Ross should see it now . . . if not a castle, at least a manor house named Dunross by its current owners. In Scots “dun” means fort. 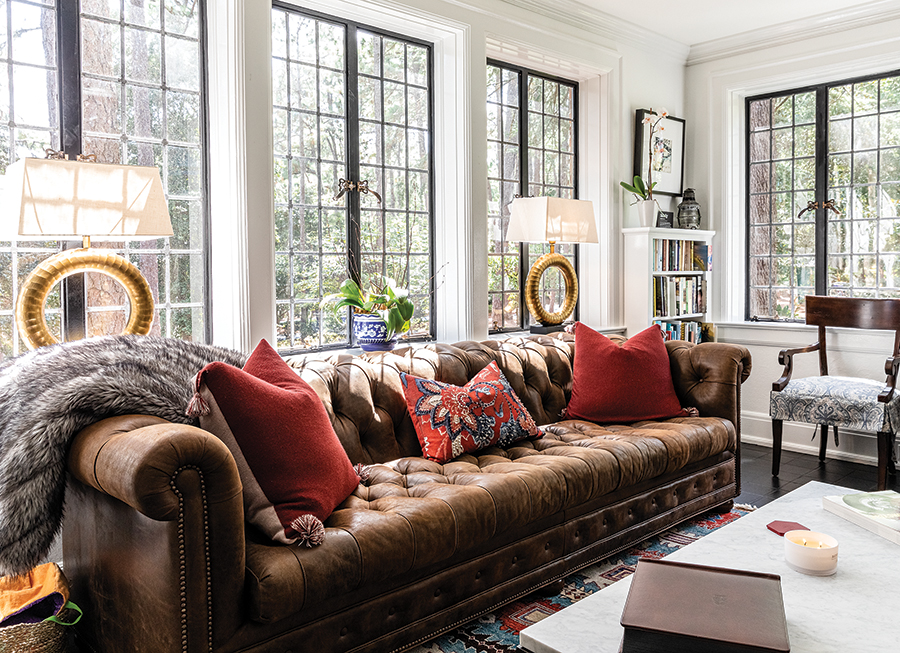 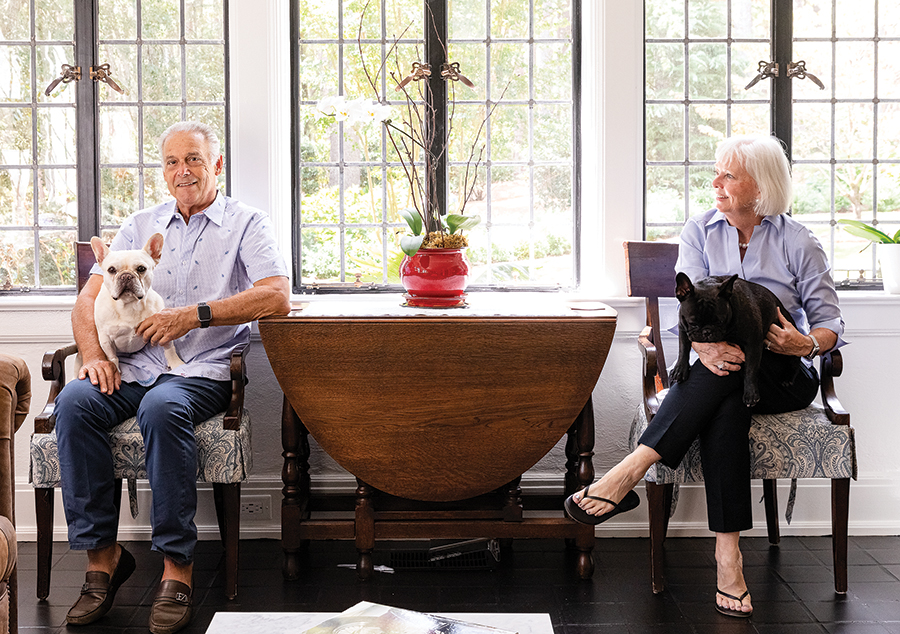 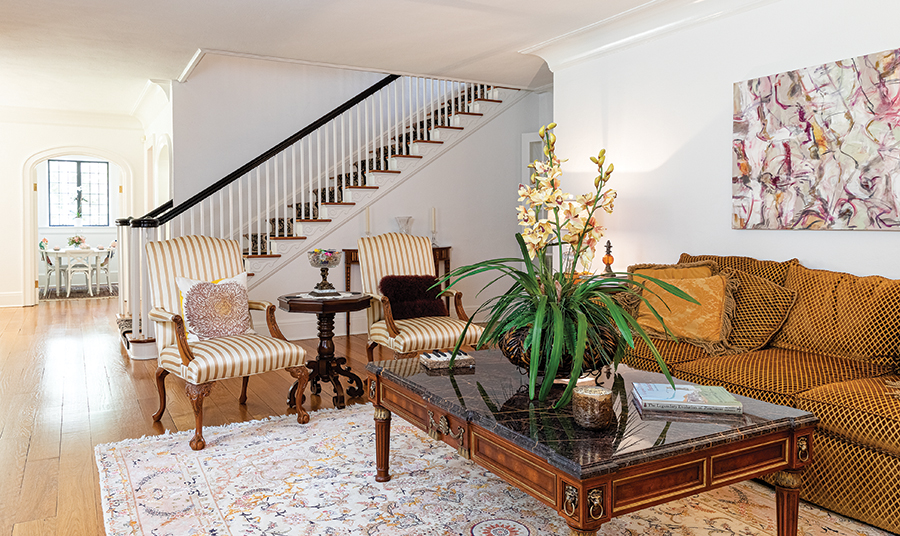 Cynthia — a seventh generation Texan — and Bruce Birdsall like things Texas-big. Seven thousand square feet of living space (plus carriage house/apartment, workshop and greenhouse) with six bedrooms and 10 bathrooms on nearly 3 acres suited the couple, as did the history.

“We were looking for a place to retire near my daughter and grandchildren,” Cynthia explains. The daughter lives in Charlotte, but they preferred a small town reasonably close to an airport offering nonstop flights to Paris, a favorite getaway. Neither their Carolina beach house, a condo in Washington, D.C., nor a Savannah residence with formal gardens met the requirements.

“Bruce was a big golfer. I bought an ornament in the Village when we came here,” Cynthia says.

Something clicked. She searched listings online. “I liked the area for its history, art, vibrant community, its bars and medical care.”

Oddly, the Ross house provided no “ah-hah” moment, at first sight. “But it had potential, and we had renovated other old homes.”

This one had been modernized, but Cynthia found plenty to do, beginning with removing and repairing the 37 paned casement windows, refinishing the original flooring, and adapting the screened porch to accommodate a lift down to the garden, where she had ramps installed, should either of them require a walker or wheelchair. The house was already equipped with an elevator. 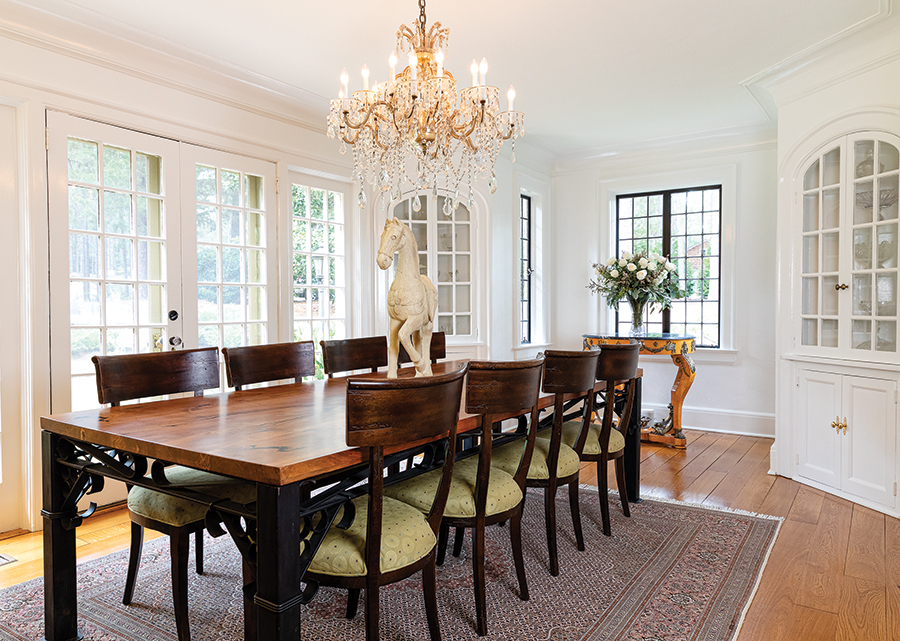 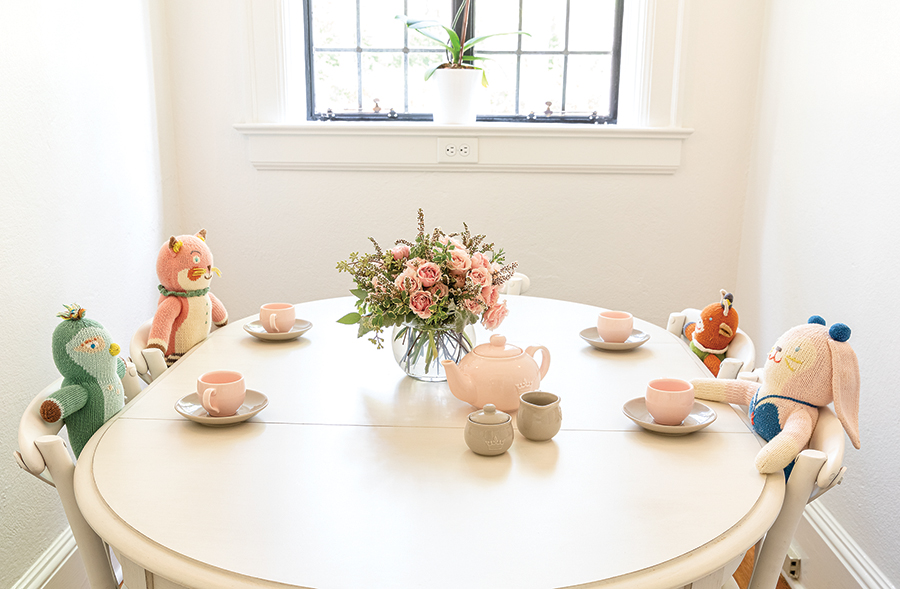 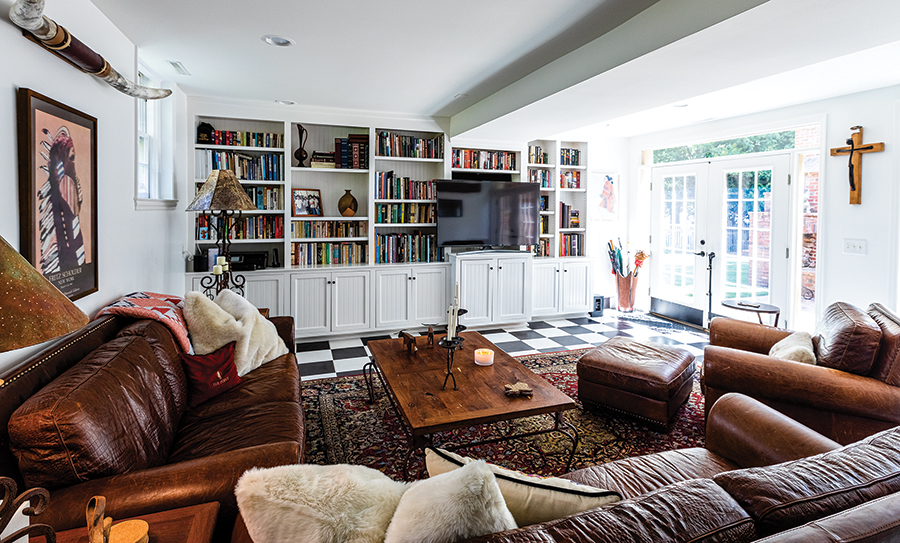 Setting it apart from others of the period is the asymmetrical exterior with pink brick, three setbacks and a front door facing away from the street, quite avant-garde for the 1920s. This allows a floorplan that creates a circular flow during large gatherings.

The Birdsalls enjoy entertaining; when they moved in, in 2018, they put invitations for a get-acquainted party in mailboxes throughout the neighborhood. The house is scheduled to be on next spring’s (COVID permitting) Southern Pines Garden Club home and garden tour.

True, the main staircase stands, traditionally, opposite the front door, but the dining room lined with casement windows forms a wing jutting to the left. Enter the kitchen directly from the foyer area, continue to the screened porch, the bar room (where they have cocktails daily at 5:30 p.m.), the Carolina sunroom (big enough to comfortably accommodate a 10-foot leather couch) and back to the living room. Also off the foyer, an adorable nook (originally a butler’s pantry?) furnished with a scaled-down table, chairs and tea service, for the granddaughters.

The kitchen contains a farm sink painted in blue Provençal motifs with matching backsplash tiles, white glass-front cupboards, a yellow Viking double-oven range and yellow prep sink. The two-tiered island has a stained (not painted) base, and the ceiling is covered in floorboards.

Upstairs, the master suite opens out onto a TV room, formerly a porch as indicated by the exposed brick wall. A five-part bath-dressing room laid out around a hallway appears to have been put together by a previous owner from a bedroom and small bath. Cynthia’s office and guest rooms complete the second floor, with Bruce’s office and more guest rooms, formerly servants’ quarters, accessed by a narrow staircase.

Almost every room has built-in bookshelves; a corner fireplace in the living room follows the Scottish placement tradition, Cynthia learned.

Then, the above-ground basement Texas room, with giant black and white floor tiles, weathered leather upholstery, a pair of wall-mounted longhorns, a lampshade made from hide, a photo of long-ago Texas rangers and other Lone Star memorabilia justifying its name. Also on this level, a combination wine cellar and fitness room. 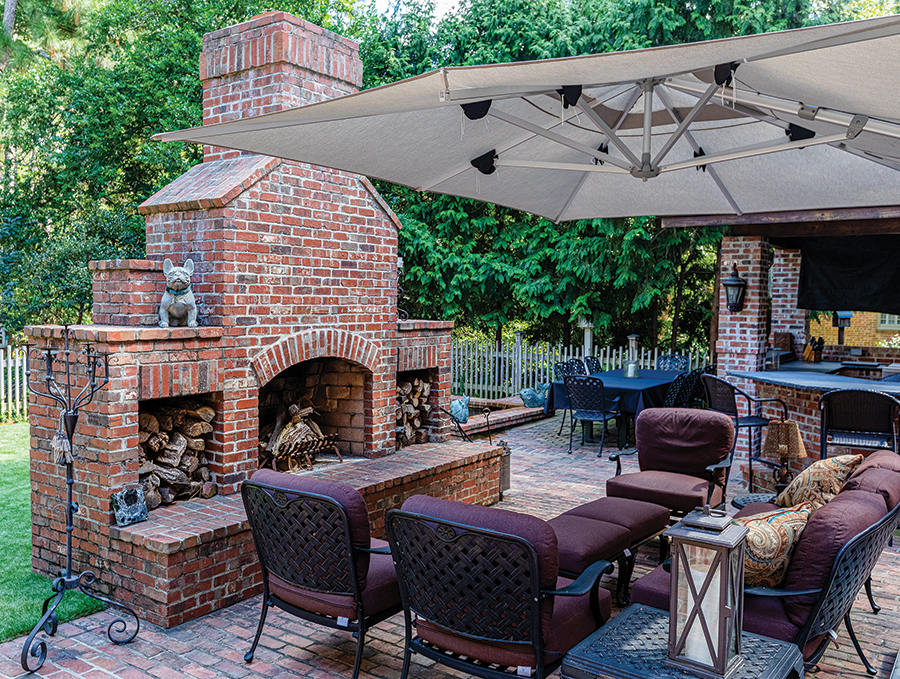 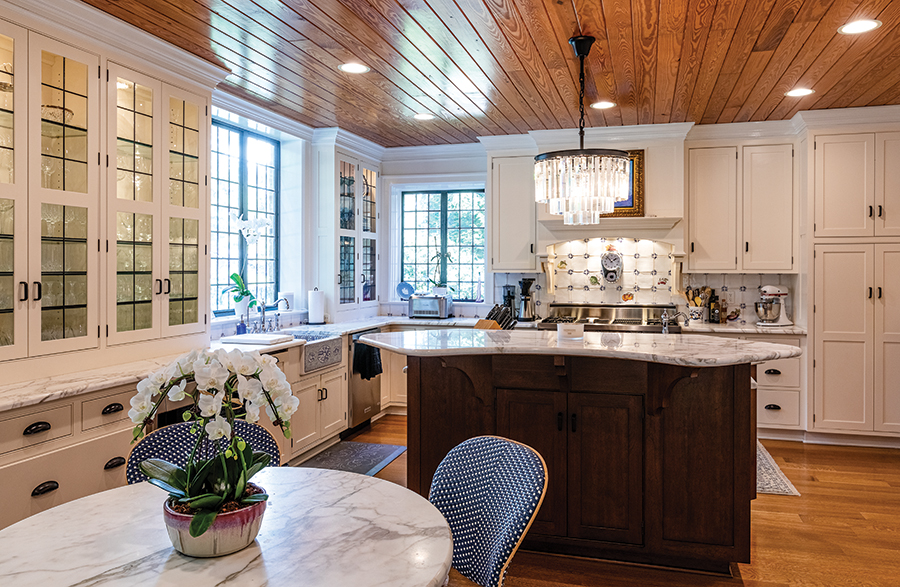 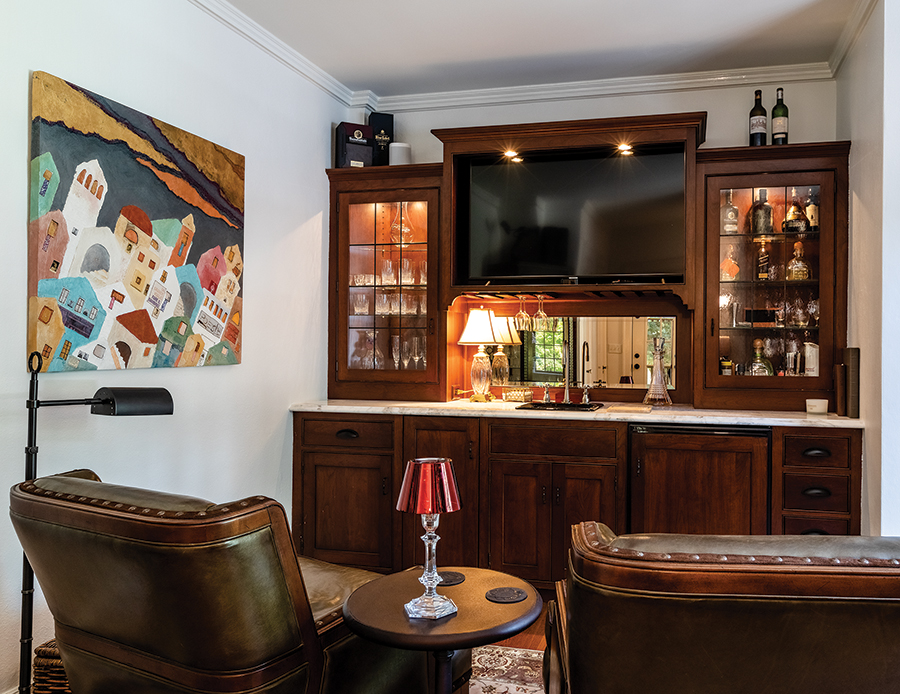 The Birdsalls purchased adjacent lots, enabling construction of a workshop for Bruce’s vintage motorcycles and cars, as well as a Victorian greenhouse imported from Belgium for Cynthia’s plants. Guarding her raised beds, the fountain statue of a woman is reminiscent of Midnight in the Garden of Good and Evil, set in Savannah. Already in place when the Birdsalls assumed ownership, an apartment with deck over the carriage house and a complete outdoor kitchen with dining area, stone fireplace and koi pond.

No pool. “We’re not pool people,” she says. But they are grandparents who provide a tree house, where the grandkids have art lessons.

The Birdsalls travel, collect and display, with restraint. No clutter in this fort. Cynthia identifies favorites:

In the living room, a 19th century inlaid French armoire, “The first piece of furniture I ever bought,” now filled with crystal flutes.

In the bar room, where they relax over afternoon cocktails, Cynthia displays Bruce’s collection of single-malt Scotch. Her favorite kitchen appliance is a gelato maker, which she uses to turn berries and mint from the garden into elegant European-style desserts.

The dining room standout has to be the table that seats 12, custom-made from a single mesquite tree, with a heavy wrought iron base.

Paisley upholstery on porch furniture was chosen to complement a poster from Verona. Cynthia is definitely a poster person: Her favorite, drawn and signed by Tony Bennett, has a jazz theme. Cynthia and Bruce were regulars at the New Orleans Jazz Festival.

The star of the master bedroom, done in white and seafoam beige, is a tiny crystal Baccarat jewelry box found at an antique auction, while in the master bathroom Cynthia likes a round glass stand next to the claw-foot tub for her bathtime glass of Champagne. Also in the bath suite, a glass-front cabinet belonging to Bruce’s mother now displays Cynthia’s collection of perfume bottles. 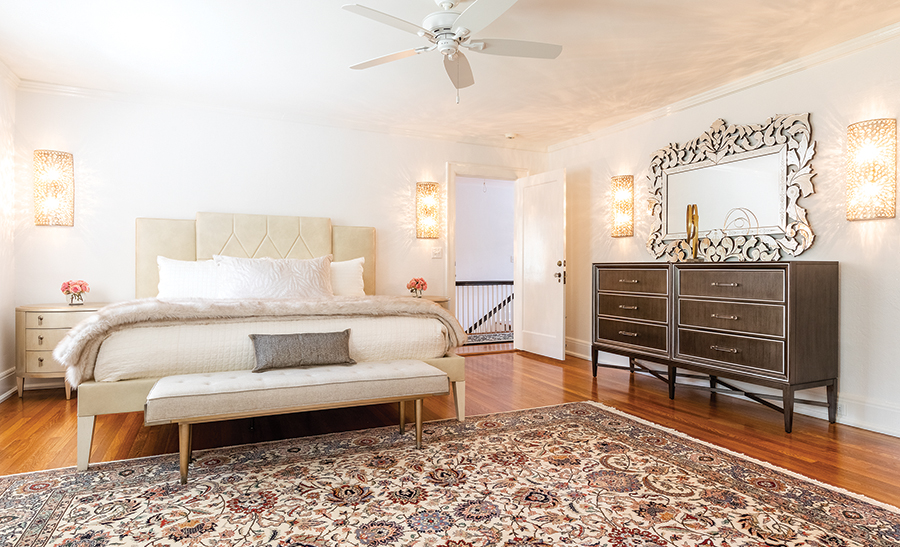 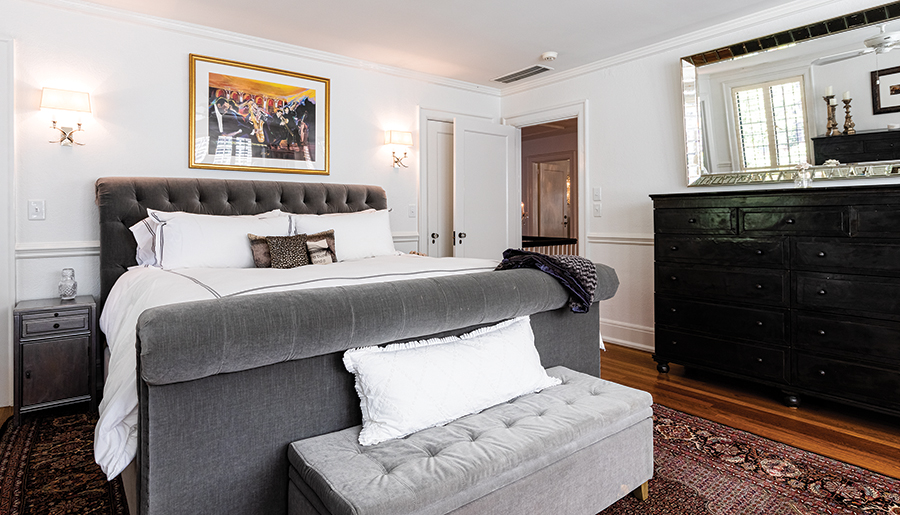 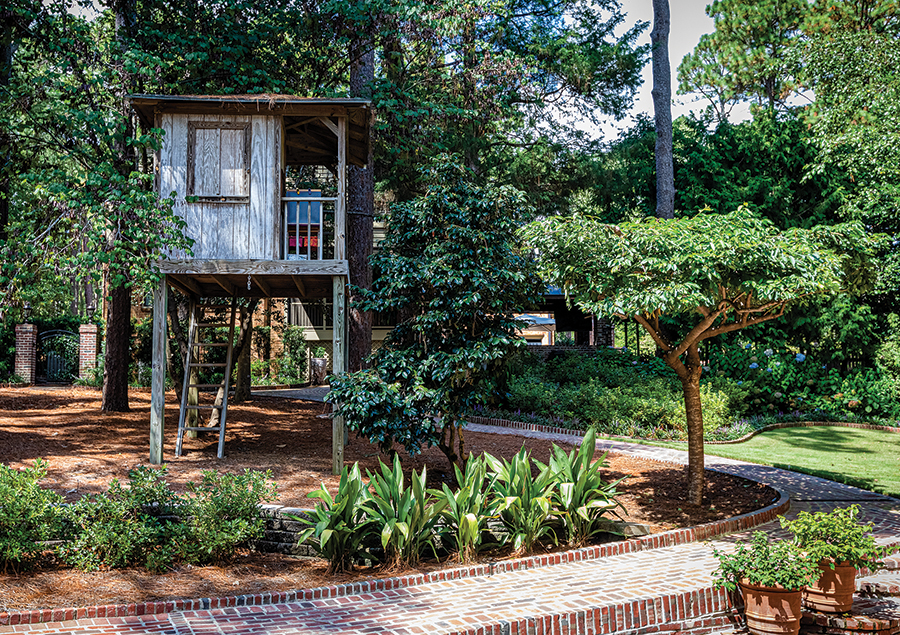 Their only other family heirloom, a child’s rocking chair made by Cynthia’s great-grandfather, has a special place in a guest room, as does a purple velvet slipper chair.

Of the several chandeliers, Cynthia’s prize, from a mansion in New Orleans’ Garden District, is suspended over the main staircase, where also hangs a family portrait. A former maid’s quarters is home to a dress-up closet containing costumes worn by Cynthia’s granddaughters.

Bruce’s favorite things, aside from his workshop, set Dunross apart. A system of soft lights weaves through the tall pines surrounding the lawn. At dusk they come on, bathing the estate in faux moonlight.

Donald Ross’ castle has evolved into an extraordinary retirement home occupied by far-from-ordinary people. Cynthia grew up on a ranch in East Texas; Bruce in a wood frame house in Connecticut. Dunross represents their achievements, as well as a well-planned gathering place for families, friends and two French bulldogs named, bien sur, for a pair of French institutions, Coco Chanel and Rémy Martin.

“This house has a sense of peace about it — a contented place,” says Cynthia, “a good place to spend our last years.”  PS