Story of a House: Second Wind

However, the yard was what sold Kim. She and Todd raised three athletic children in the stately manse built during the mid-1920s Southern Pines building boom, occupied in the 1950s by Rev. Maynard Mangum from First Baptist Church across the street. In fact, when the Stouts purchased the house in 1988, urban renewal was still a concept, relegating L-L-L to the ’burbs, not historic district cottages uphill from Broad Street. 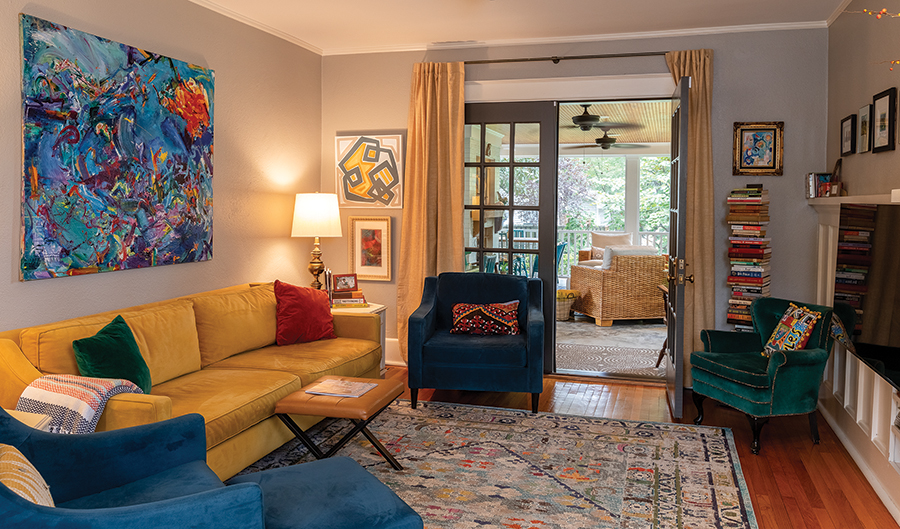 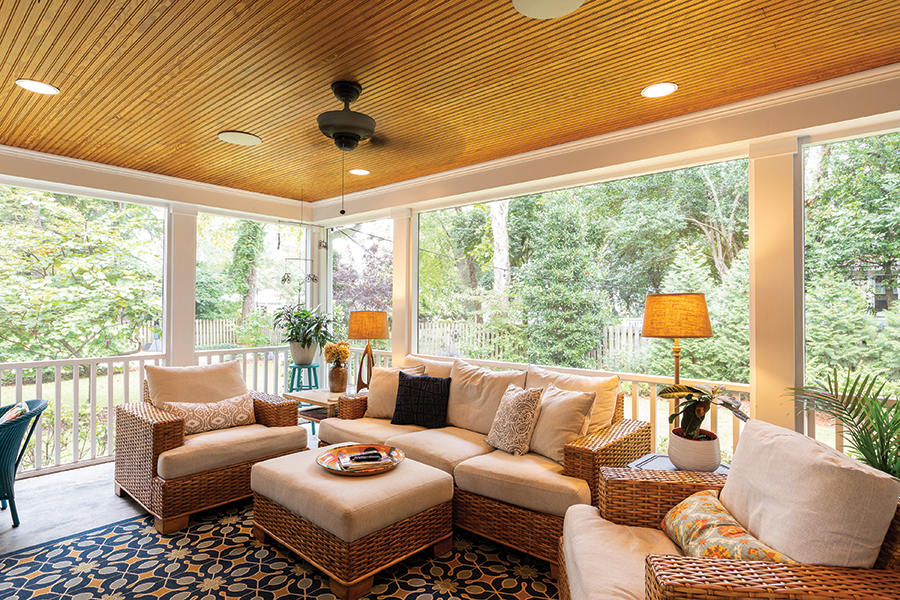 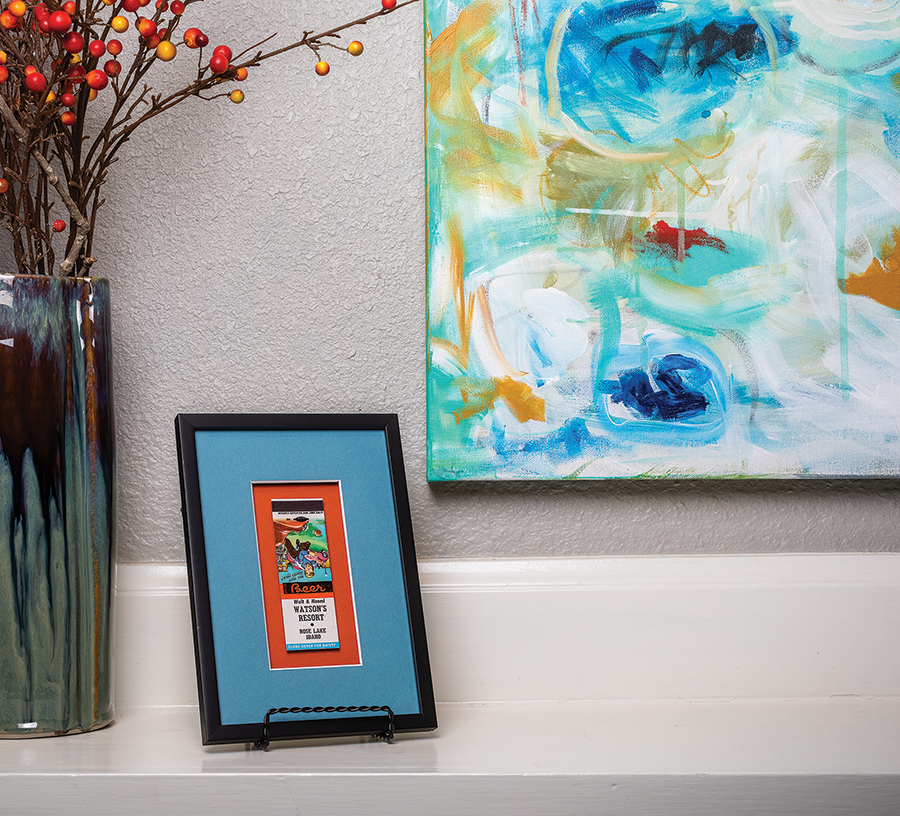 Kim, from Monroe, North Carolina, and Todd, from Idaho, were living in Laurinburg, where Todd’s father farmed turkeys. Todd discovered Southern Pines through cycling. “I came up to ride,” he said. “It’s the only place I could find cyclists.”

His discovery happened in spring, with azaleas in bloom. Broad Street was charming, the people, welcoming. “I never saw a place I liked better.”

Kim was pregnant with their second child. They looked at houses. Just inside the front door Kim decided this one was it. “We’ll take it,” she told the Realtor.

Never mind what Kim describes as “ . . . total chaos most people would run from.”

Not to worry. They participated in the initial renovation, with experience gained from working on a 1940s home. “We had also lived in a brand new house that was just . . . a house,” Kim says.

She set about filling their acquisition with a hodgepodge of furnishings and a third child. 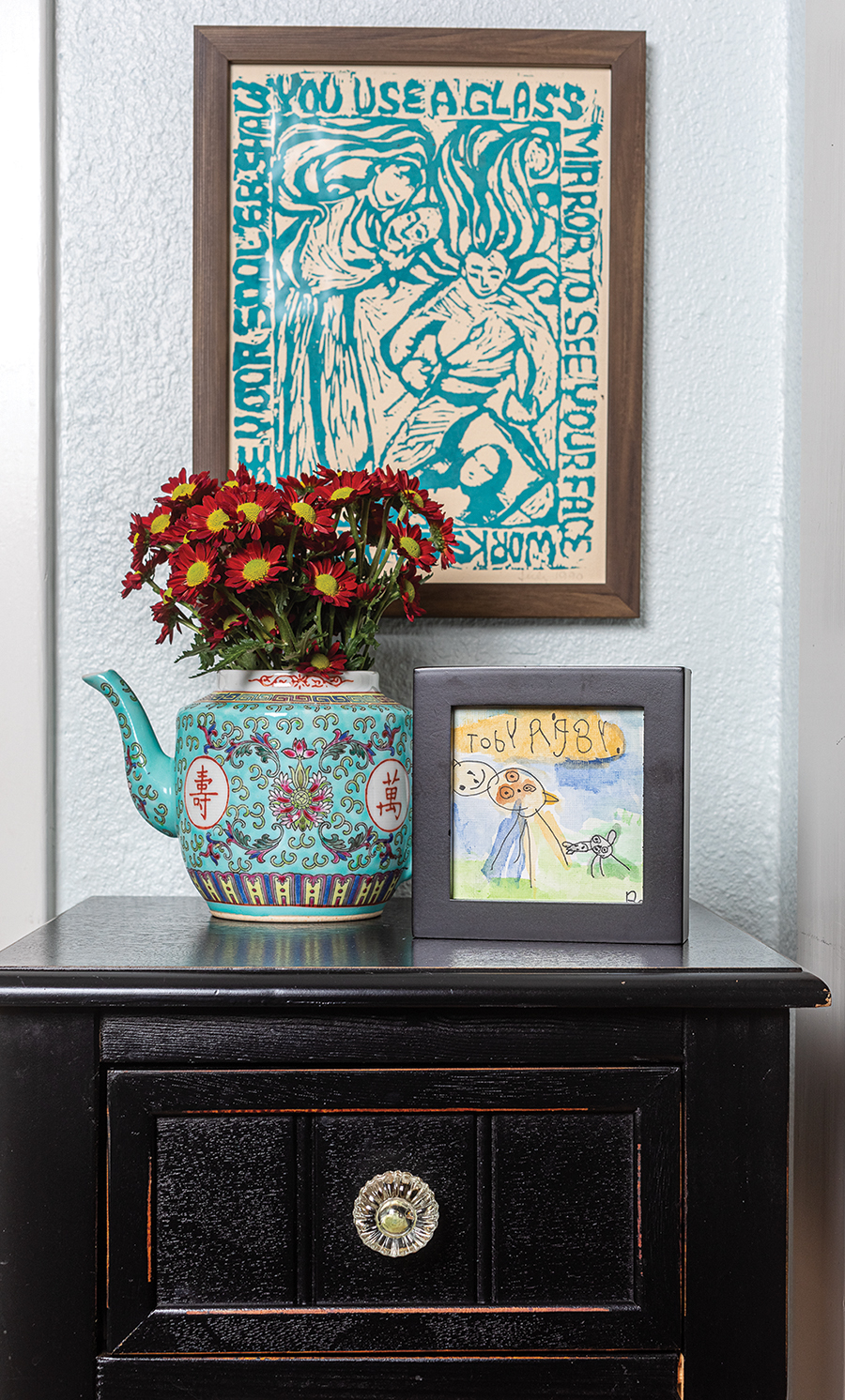 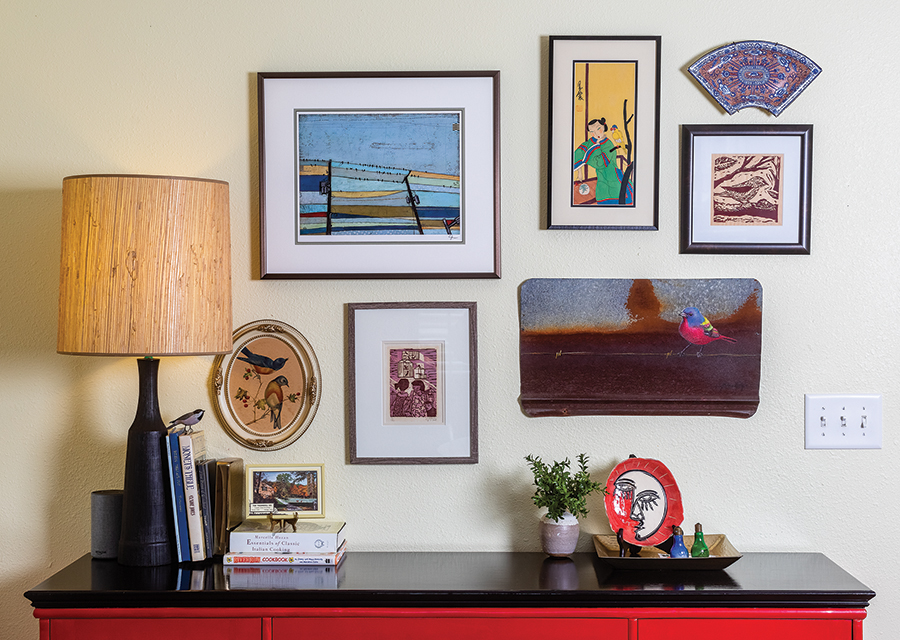 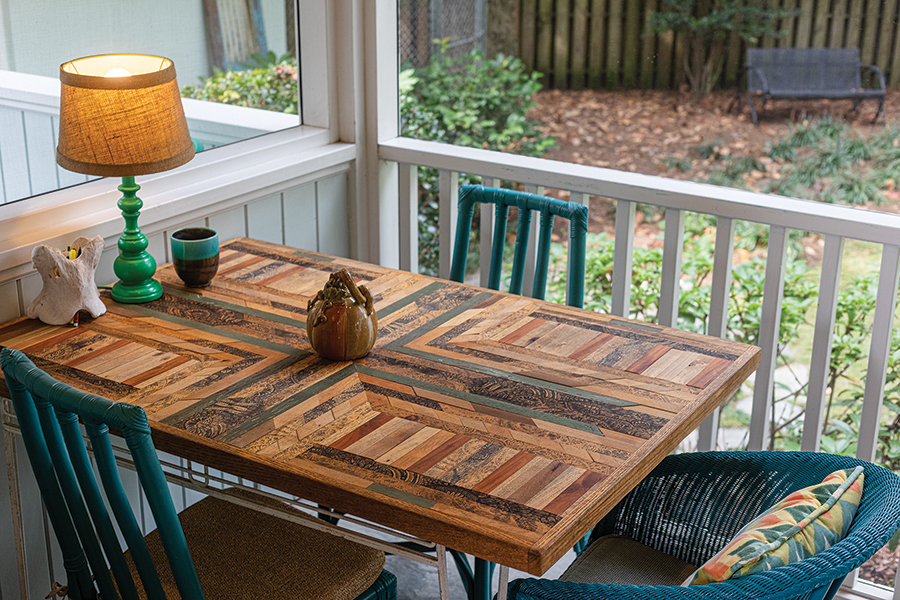 Life rushed by. In 2012, with the children mostly grown and gone, Kim and Todd decided on a major upgrade. They pushed out the kitchen, added a screened living room with fireplace, created an open air morning coffee porch and an upstairs master suite.

Or, as Todd puts it, “We went from five people and two bathrooms to two people and four bathrooms.” One of those bathrooms, Todd’s favorite, encores 1950s avocado and black tiles, now fabulous retro chic. The new kitchen — pale gray with mini-bursts of color — is efficiently sized, not cavernous, punctuated with angles and cubbies.

Unlike the current practice of imposing open spaces on a classic cross-hall floorplan, the Stouts left rooms intact, delineated by wide, graceful door and window moldings, a detail (along with textured plaster walls) that adds what real estate professionals call “character.” All the doors and windows are original, Kim notes, also the beveled glass panes in the front door.

Besides that tomato red buffet, the small dining room has a round table with a built-in lazy Susan, like Chinese restaurants of yesteryear, where dishes are placed in the center and families help themselves.

“Lots of stories (happened) around this table,” Kim says wistfully.

Even the tiny foyer coat closet yields a tale. Inside the door, height markers for Lindsey, Matthew and Sean survive in faint pencil. 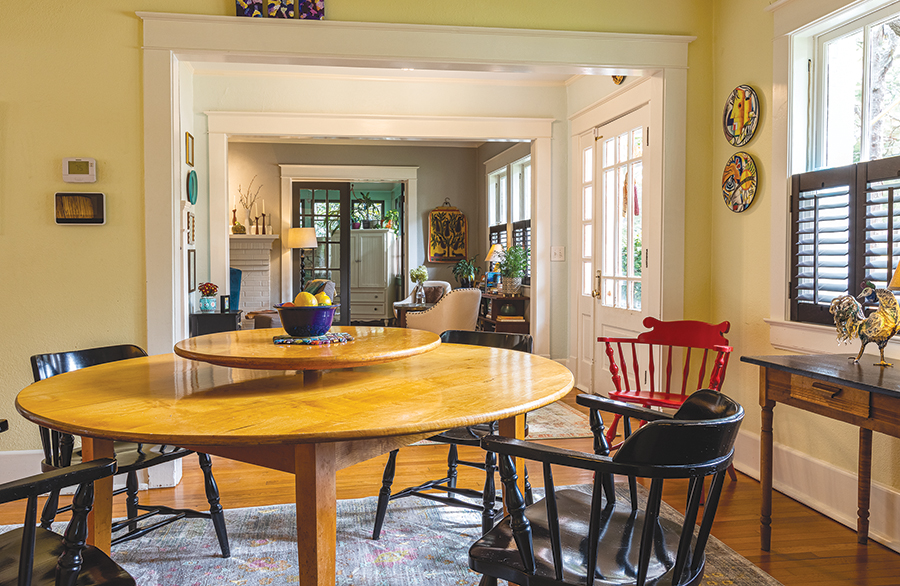 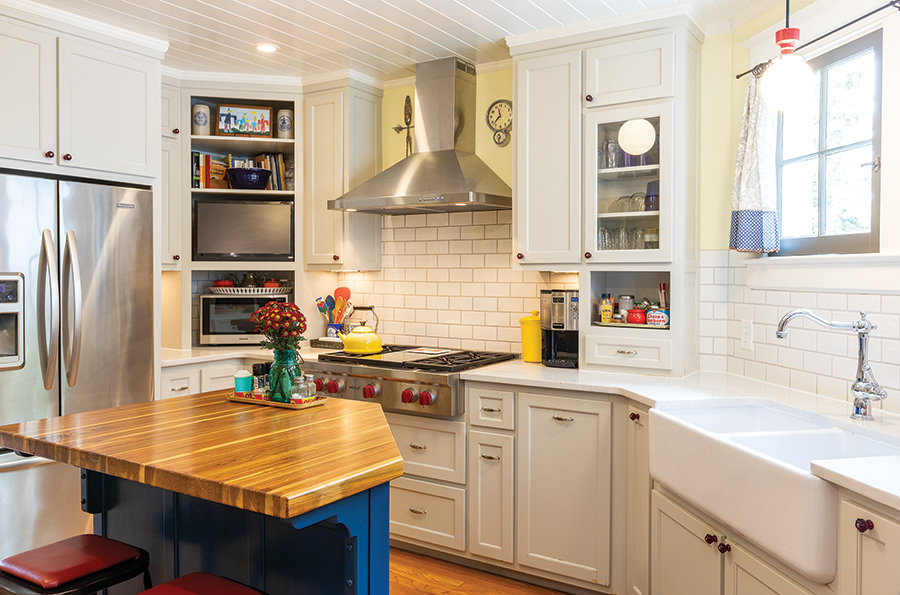 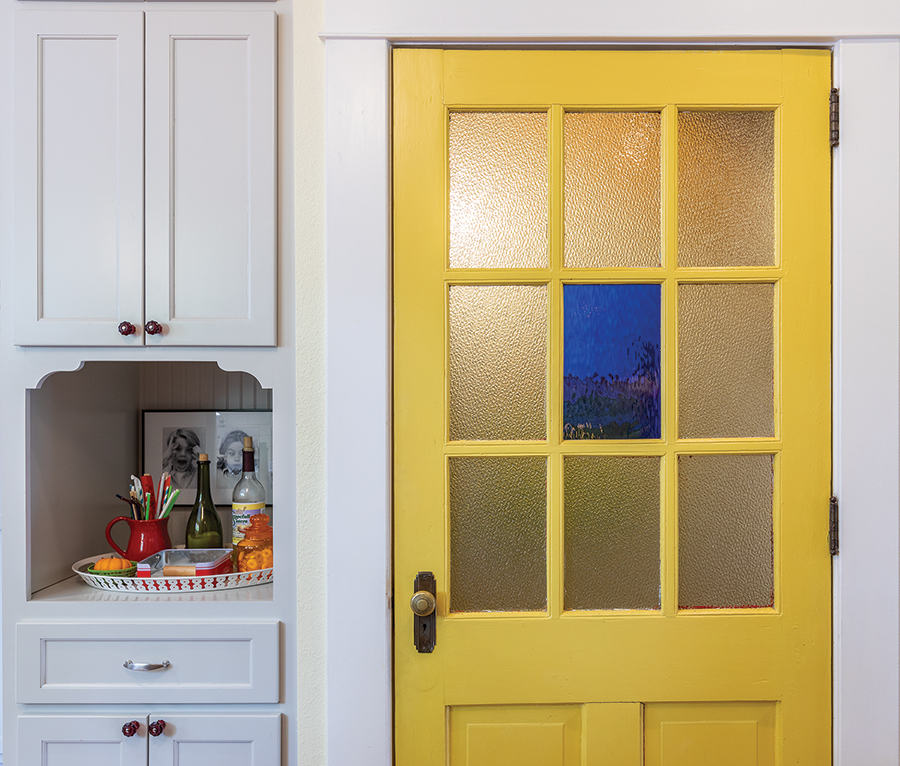 Todd’s input: “I’ve done one thing.” He holds up a framed matchbook (found on eBay) from Watson’s Resort in Idaho, an outdoorsmen’s paradise, where he spent happy times.

Except for the art — some paintings by Kim herself, others by daughter Lindsey — the living room, especially lamps and plushy upholstered pieces, could be lifted from a ’50s stage set, including the side table made from a cross-cut tree trunk mounted on wrought iron spindles.

Here and elsewhere, Kim’s preference for green fading into turquoise originates with a grandmother, nicknamed Granny Green, for her all-green house.

Upstairs, the children’s bedrooms, hung with sports memorabilia and comic strip art, have been left mostly intact. A baseball bat and an aerial view of the neighborhood painted by a 10-year-old are mounted in the boys’ room, which survived many brotherly rumbles, Kim recalls.

After the proliferation of colorful stuff, the Stouts’ new master suite is a turnaround. Square paned windows, left bare, are set ceiling height over the king-sized bed. The deep turquoise floor appears cottage-y, as do a wicker armchair and ottoman, while three bureaus and a long slatted bench illustrate the post-war Scandinavian-modern genre. “This was our first grown-up furniture,” Kim says.

Other bedroom décor is spare, calm. Ever-practical, she installed a second washer and dryer off the master bathroom. 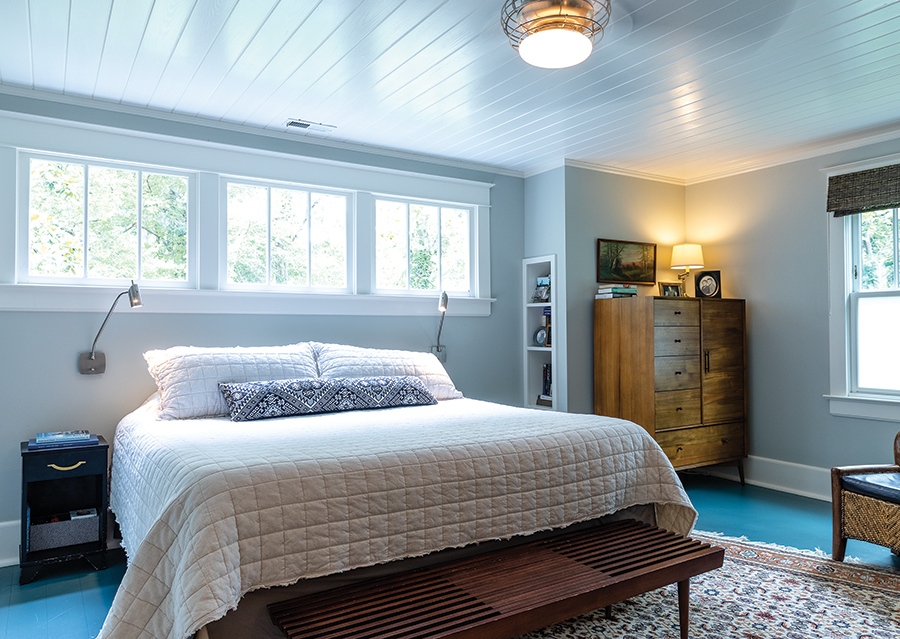 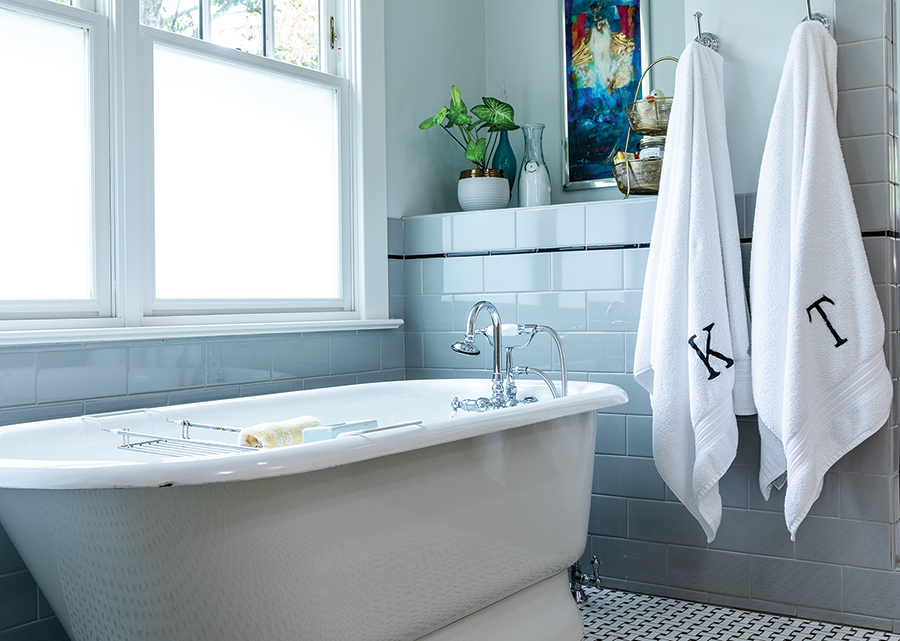 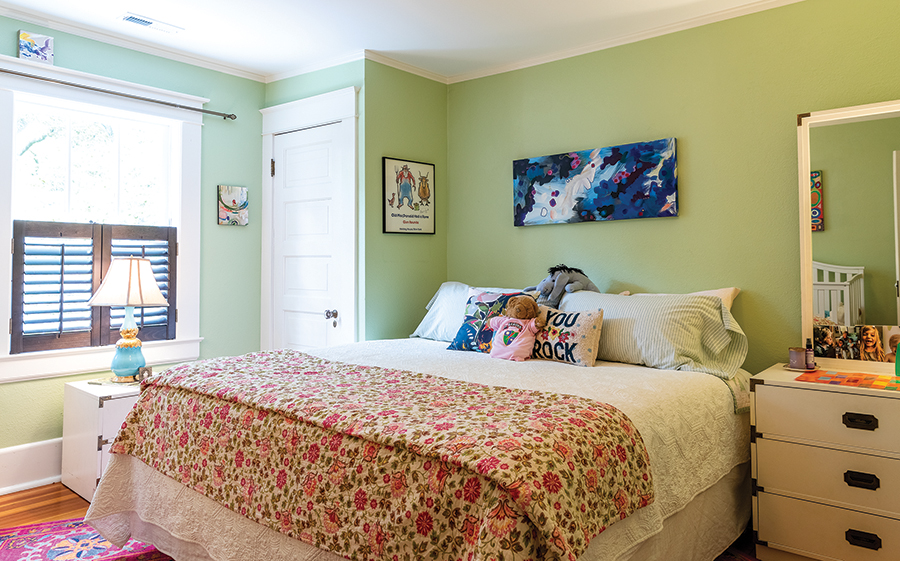 Unlike similar homes of the period, this one has a full basement, dubbed the swamp. Murky and damp no more, the Stouts’ renovation included shoring up underpinnings, creating a workout room, main laundry room, storage space and the most adorable bathroom with step-down vanity cabinet painted the same tomato red as the dining room buffet.

“I am not a spec home/cookie cutter person. We didn’t want anything formal because we had kids and dogs.” Which explains why Kim’s crewel and splashy-patterned area rugs “are almost disposable.”

When the sun shines on South Ashe Street, the painted brick of this residential jewel appears pearly white. On a cloudy day, however, a bluish-green tint emerges. Weatherproof art decorates the small sitting patio; an ancient Hotel Hampshire sign hangs over the morning porch. The grassy backyard, rimmed with shrubs and flowers, fenced for Toby the dog, echoes shouts of boys shooting hoops. Beadboard ceilings and original floors uncoated with layers of lacquer add dimension.

Throughout, the old shadows the new like a friendly, welcoming ghost.

“We’ve gone through some growing pains with this house,” Kim admits.

Or, as longtime friend Cassie Willis concludes, “This house has a heartbeat.”  PS 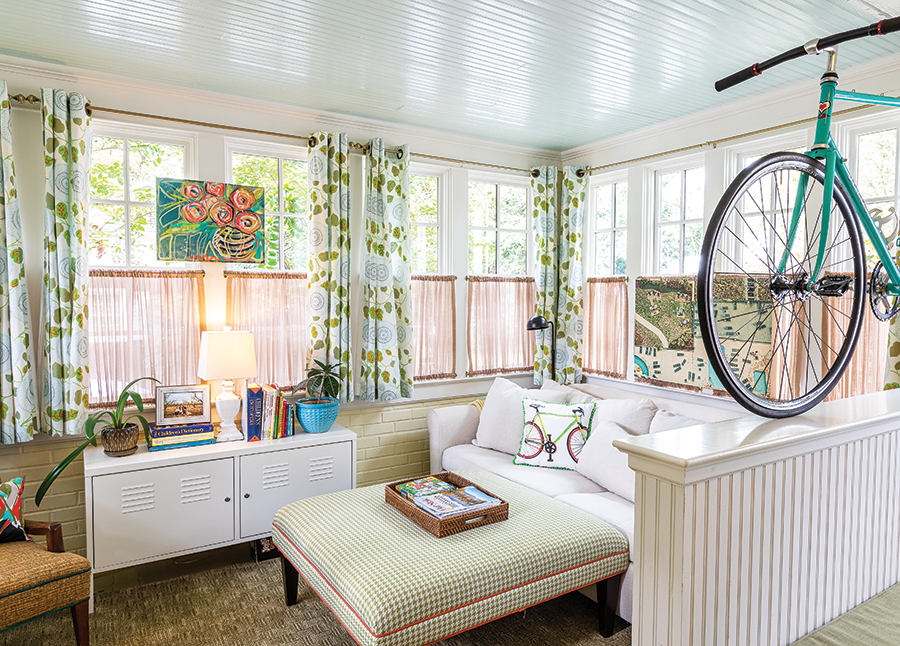 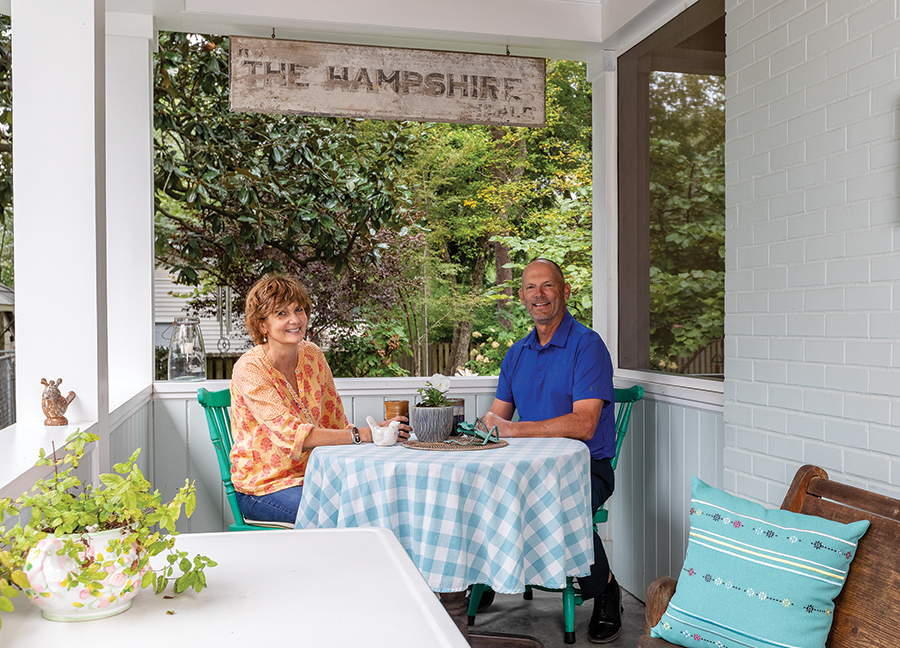 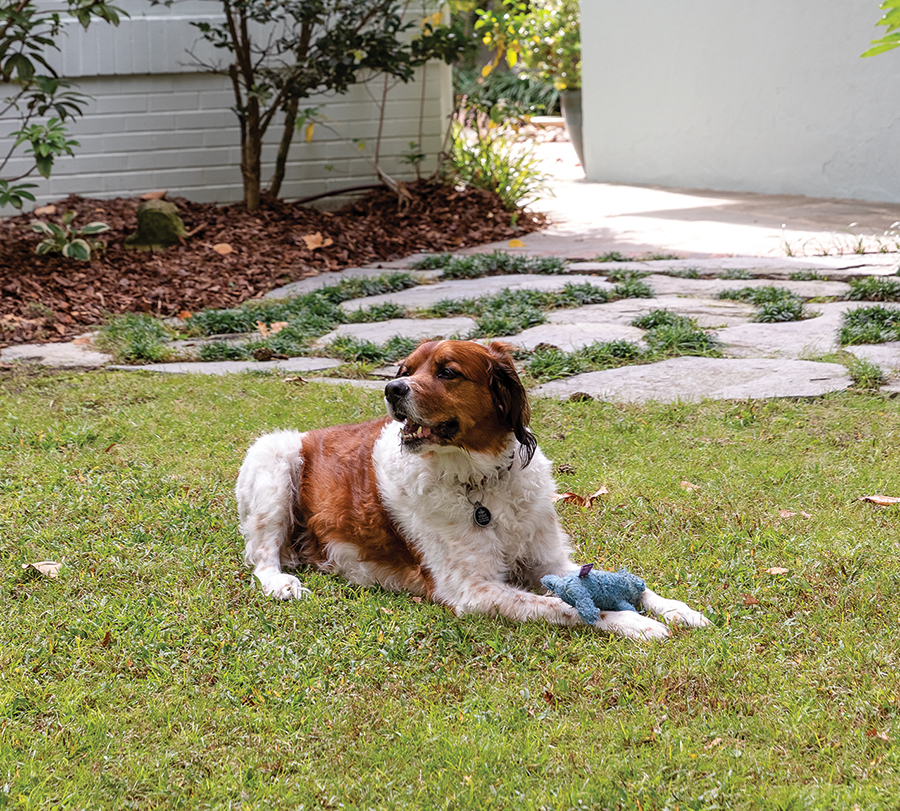