Story of a House December 2018

A Tudor manor steeped in Yule for a special occasion

Never again will Le Berceau be as lavishly adorned for Christmas as in 2017: dozens of poinsettias, two fresh Carolina-grown trees, nutcracker guardsman, heirloom ornaments and the piece de resistance, a wreath of white orchids cascading from the dining room chandelier. Thus embellished, Lucille and Jim Buck’s home bearing the French name for cradle — arguably Pinehurst’s most elegant residence — provided the setting for an event Neil Simon could have scripted for Broadway: 10 couples, married to each other for at least 50 years, celebrate with a dinner party near the host’s anniversary date.

Jim and Lucille were married on Dec. 26, 1960, surrounded by poinsettias. Logical, then, they should go lavish, albeit with a Scottish theme arising from Lucille’s heritage not discovered until moving to North Carolina. She wore her Clan Morrison tartan sash to the black tie dinner. Thistles, the Scottish national flower, appeared in floral arrangements. A bagpiper played during cocktails. Unicorns, the official Scottish beastie, decorated the dining table. The menu, served on Spode Christmas china, debunked the notion that UK food is mostly forgettable: smoked Scottish salmon, roasted quail with Scotch eggs, tenderloin of beef with whiskey sauce, neeps (a root vegetable) and rumbledethumps (cabbage and mashed potatoes), frisée with Scotch vinaigrette and, for dessert, a wedding cake topped with bride and groom, he in kilt, she with an arm reaching around to lift it.

As Lucille put it: “This was a big deal.”

Guest and “club” member Mary Gozzi elaborated: “OMG awesome, spectacular, so festive I was speechless. I’ve never seen so many orchids in one place. Lucille is a party giver who’s got it down to the jelly beans!” 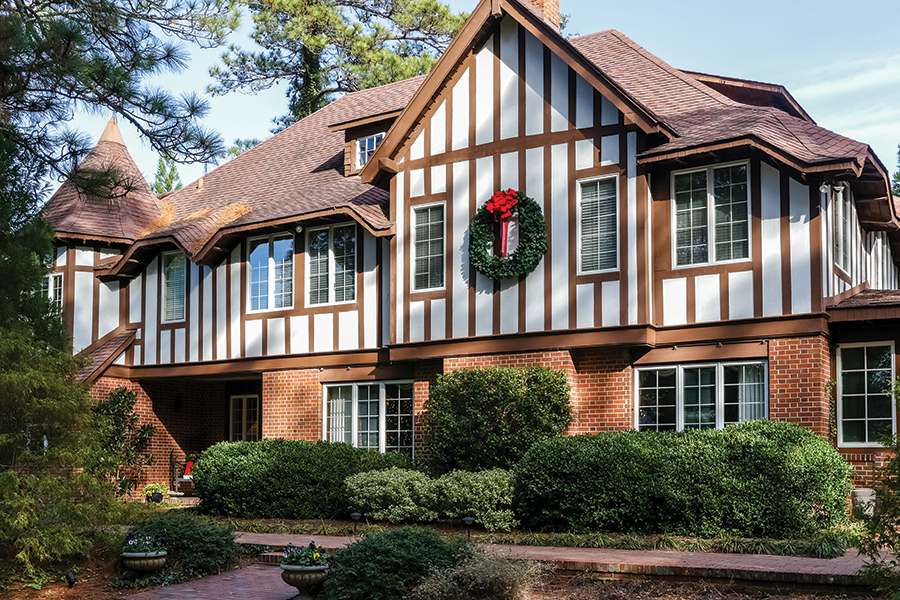 But a dress is only a dress until draped on a stunning model. Even bare-naked Le Berceau seems Christmas-y, with multiple nooks, seating and dining areas, sun porches, mantels, paned windows, staircases, a tiny telephone cubby begging decoration. The tone is classic with red dominating since, Lucille says, “For Jim it’s either red or ugly.” The elevator bears a touch of Yule, as does the carousel horse prancing on the landing.  Jim’s office, arranged around a desk belonging to movie star Loretta Young, doesn’t escape the red wave. Here resides memorabilia from his career as an attorney, senior vice-president of the New York Stock Exchange and author of its definitive history. Lucille has her “pouting” room hung with accolades from a career in education at fine New York schools.

“I had an absolutely unqualified dream that I would live in a house like this,” Jim decided, as a boy growing up in Ohio.

In 2000, while living in a soigné Manhattan apartment with a house in the Hamptons, they contemplated retirement. But where? Let’s drive over to Pinehurst, they decided, while visiting a daughter who lived in Charlotte.

Lucille fell in love. “I felt at home,” among the longleaf pines, azaleas and gardenias that grew in East Texas, her childhood home. The Tudor-style manse with swimming pool and a servants’ wing suited for guests satisfied Jim’s goal. Imagine that, within sight of the Carolina Hotel. 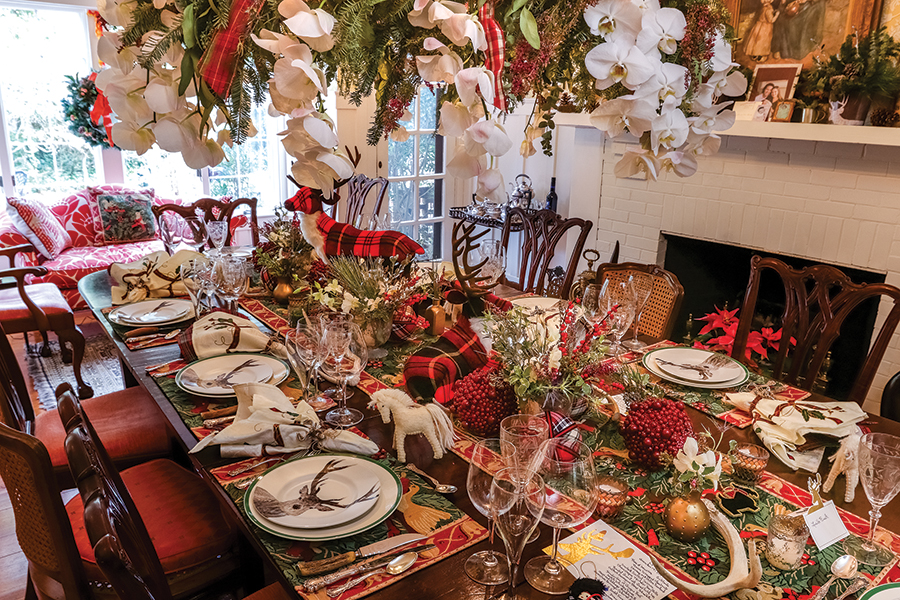 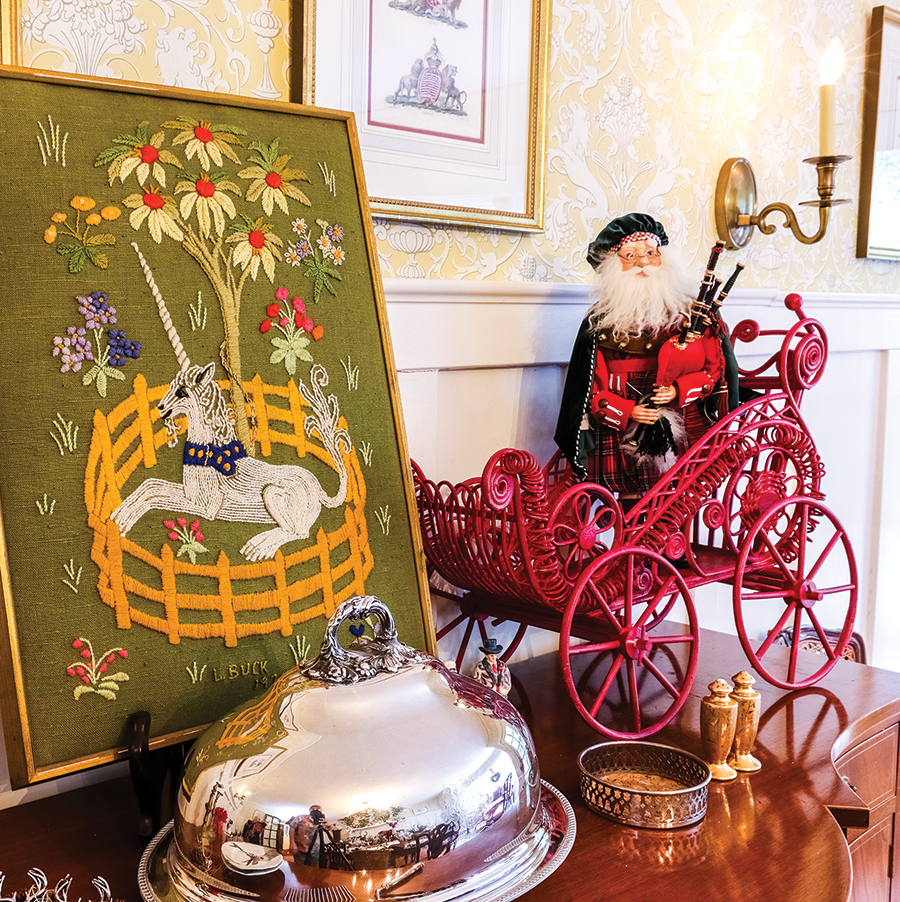 This central location mattered to its first occupant. James Tufts lured Bostonian Dr. Myron Marr to Pinehurst, as resort physician. The house, designed by a Boston architect and built in 1921, probably sweetened the deal for the Marr family, who remained there until the 1950s. The Bucks are only the fourth owners.

Their imprint on the house, however, is indelible, starting with the walls, wallpapered throughout. Not just commonplace florals and geometrics. In the kitchen, giant Delft-blue platters against a red background reflect the blue Viking range. Fashion drawings for a granddaughter’s bedroom, English teacups for Lucille’s dressing room, birds in the laundry room, a rubber ducky bathroom, toile and Asian motifs in the master and other bedrooms. In the salon, especially for Jim, a solid red textured paper provides a backdrop for sofas covered in a red, cream and green Brunschwig et Fils fabric chosen by Jackie Kennedy’s White House interior designer for Brooke Astor’s library.

“I’ve had my eye on that fabric for years,” Lucille says, but only now found a suitable setting. 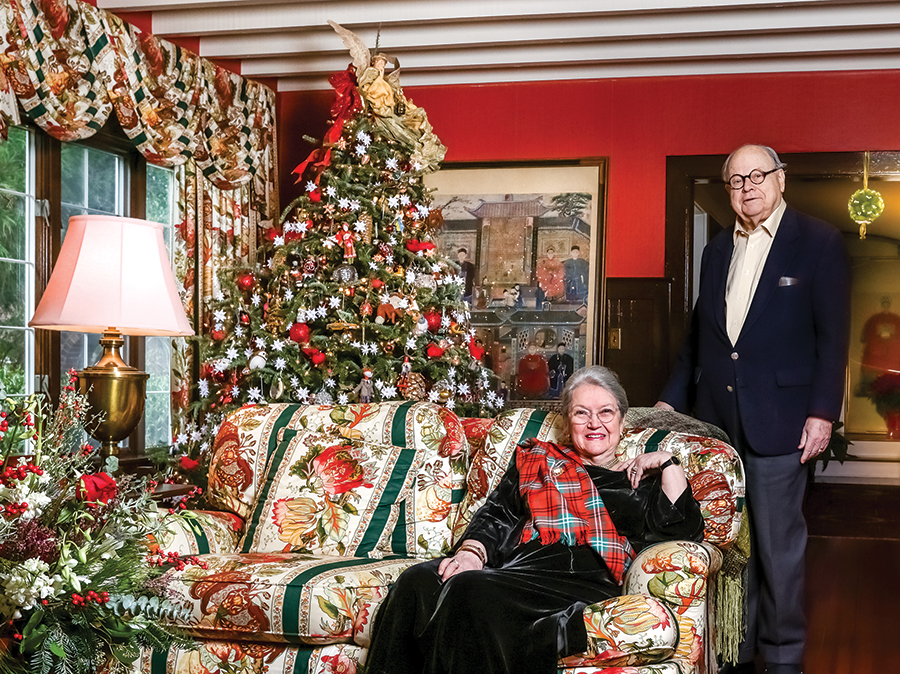 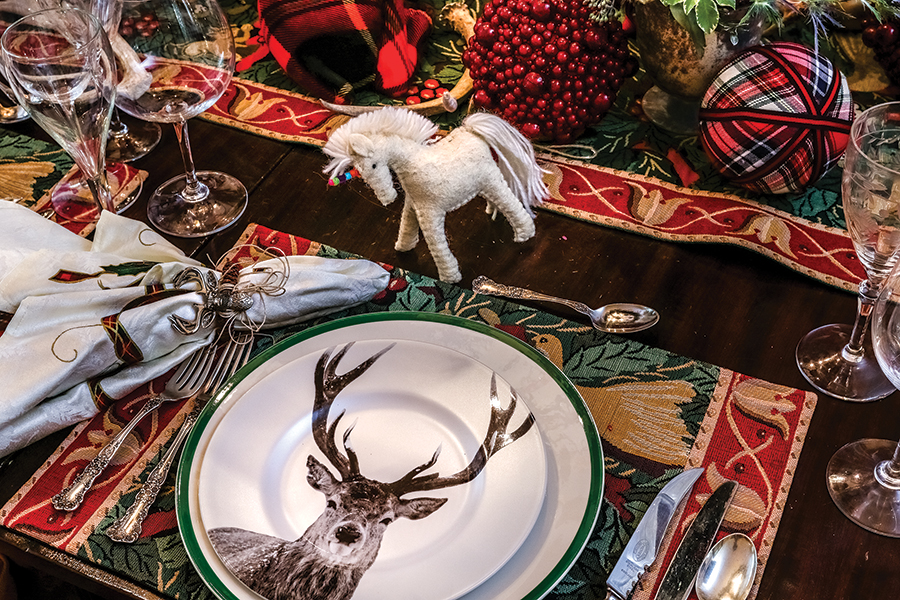 The Bucks’ Christmas ornaments and decorations form a family scrapbook of places and events. Into the hand of a tall nutcracker (a window decoration purchased from a store going out of business) Lucille would tuck tickets to the ballet at Lincoln Center for their daughters, who eventually danced in the Christmas production. A grandson later danced the part of Fritz, garnering a glowing review in The New York Times, which Lucille proudly reads aloud.

Then, the prank concerning green balls on the tree — Lucille’s choice — which the Bucks’ son said didn’t show up well enough. Through a complicated long-distance adventure that included snitching a giant green ball from the trunk of his parents’ car and hanging it from the top of the house on the Fourth of July, Lucille was proven wrong. Now, Moravian stars, pine cones and cardinals represent their relocation to North Carolina.

“In every house we’ve lived in, I always wanted a bigger Christmas tree — to touch the ceiling,” Jim says. Lucille decorates the tall living room tree and a smaller one in the bedroom, needing help only with attaching the angel on top. She commemorates Jim’s Swedish background with a Santa Lucia doll wearing a crown of candles — but marinated herring isn’t for Christmas dinner. 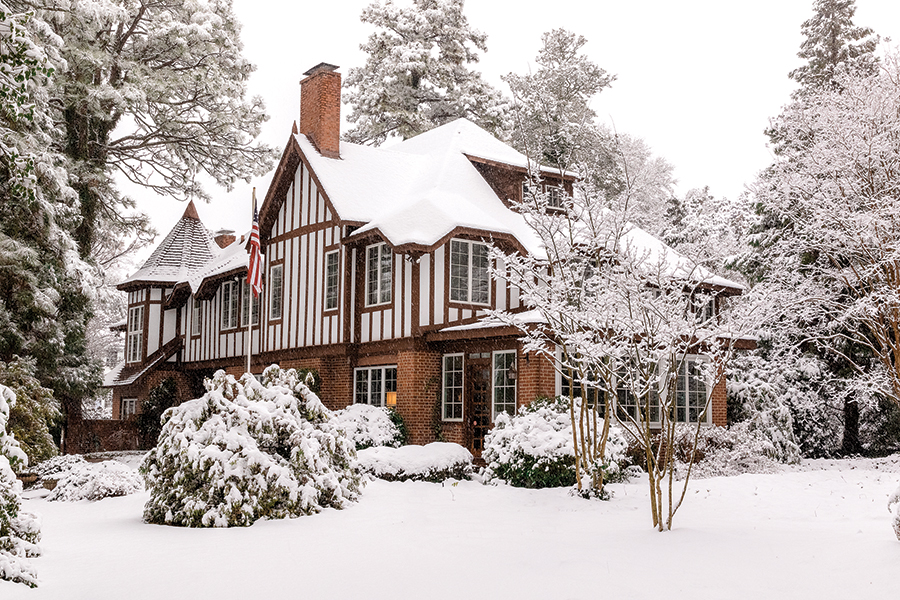 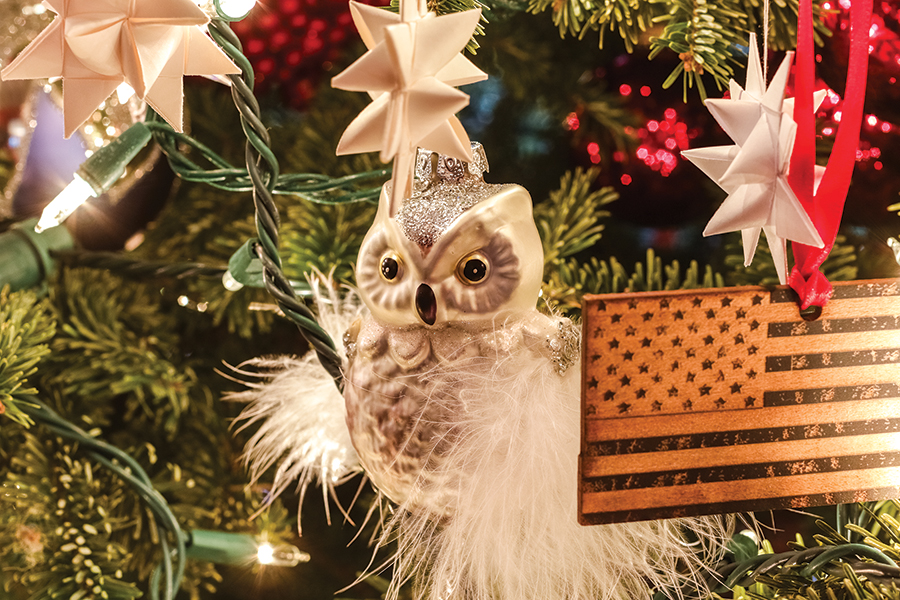 Christmas holds one poignant memory for Lucille:
“My mother and father took me into the woods to cut a tree . . . it was a great outing. One time we even chose a holly (bush).” Lucille’s father died when she was 12. “The year after that our minister went with us, so I wouldn’t miss it.”

Their decorations remain in place until Feast of the Epiphany, Jan. 6.

But last year, overriding all memorabilia and decor, was that wreath of anniversary orchids — a veritable canopy over the dining room table — designed and implemented by Carol Dowd of Botanicals. “We started planning in July,” Dowd says, inspired by a hanging orchid arrangement Lucille remembered from a dinner party in New York. Surprisingly, the two dozen white orchids, FedExed from Miami, proved long-lasting with only water tubes. The wreath hung for more than two weeks. More important, rather than obstructing guests’ sightline, the wreath, suspended over a low centerpiece, created a bower effect.

What a Christmas. What memories. “My Scottish heritage found me,” Lucille says. Sharing it with close friends was a blessing. “We’re the same generation. We’ve lived this long and have been successful, career-wise and in marriage. The party was a big job but I didn’t mind. In fact, it invigorated me.” PS