Touch of the Orient 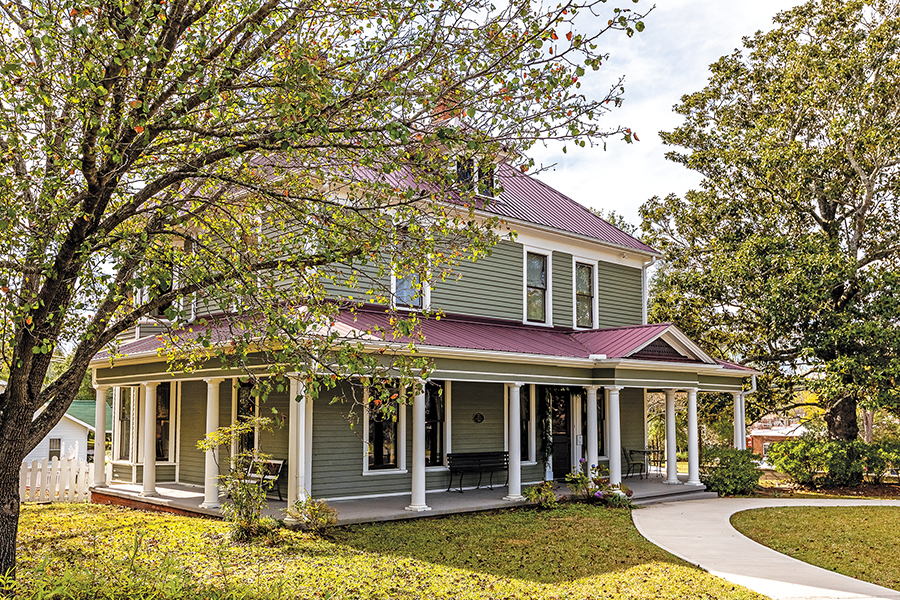 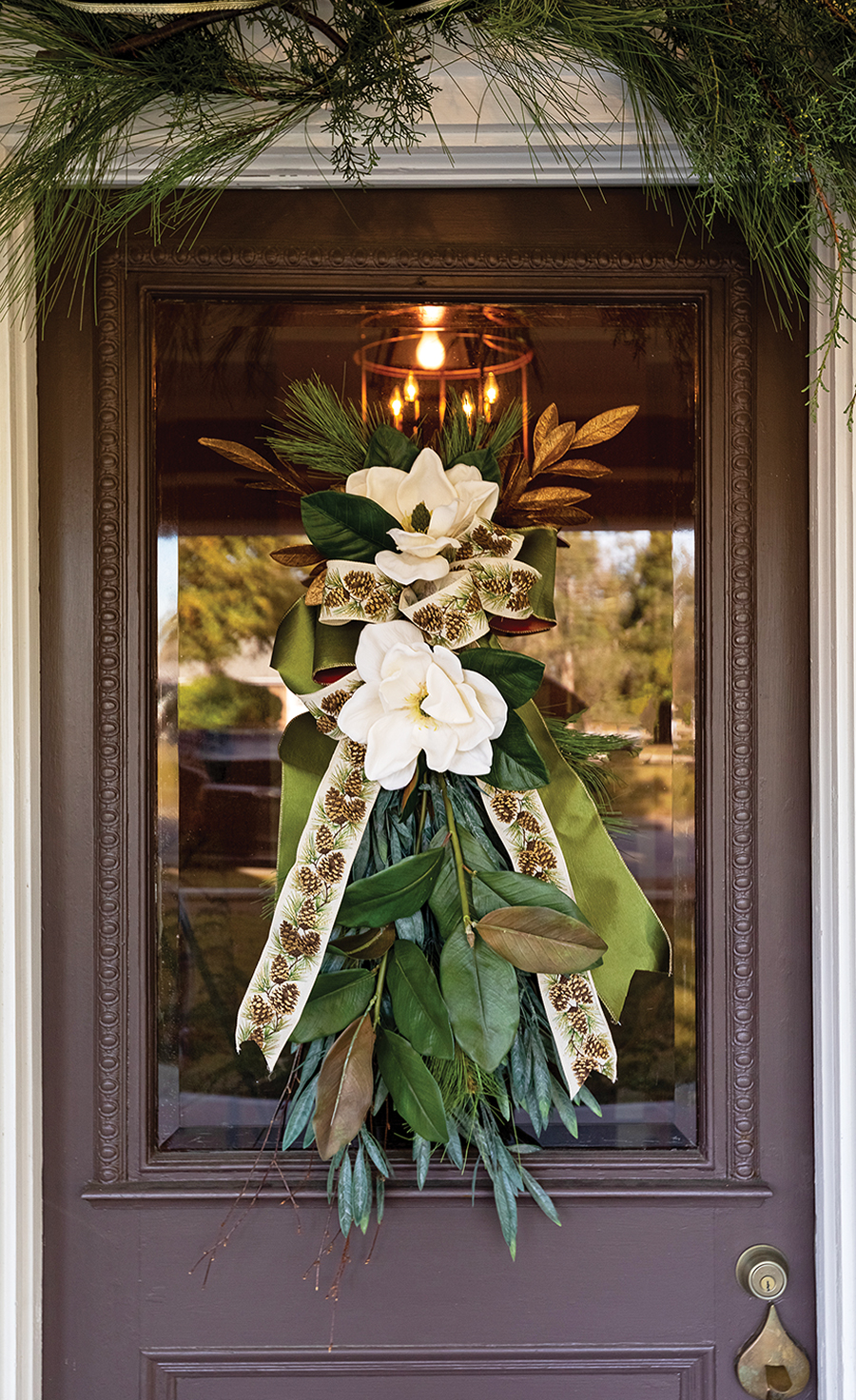 In the late 1990s, Bart Boudreaux was living in Beijing, China, with his wife, Lynel, when a friend invited him to visit Pinehurst.

“It was a lot different back then,” says Boudreaux, a Louisiana native whose work in the oil business had taken him all over the globe. “Very quiet, calm. Not much traffic. That’s what we were looking for . . . especially coming from China.”

Of course, the world-class golf was part of the draw. “Unmatched,” says Boudreaux.

Life in Pinehurst became the pin on the narrowing horizon. In 2012, the couple bought and restored one of the 1895 James Walker Tufts cottages (The Woodbine) in Old Town Pinehurst, where the couple have lived since Bart’s retirement in 2015.

But this isn’t a story about that house, nor is it a story about Pinehurst. Ultimately, this is a marriage story. It begins with one man’s love of old houses.

“I can’t explain it,” says Boudreaux, trying to put his passion for restoration into words. “I needed to find something to do outside of golf.”

Perhaps his time in New Orleans influenced his taste for old houses. “Not everyone’s cup of tea,” he admits. 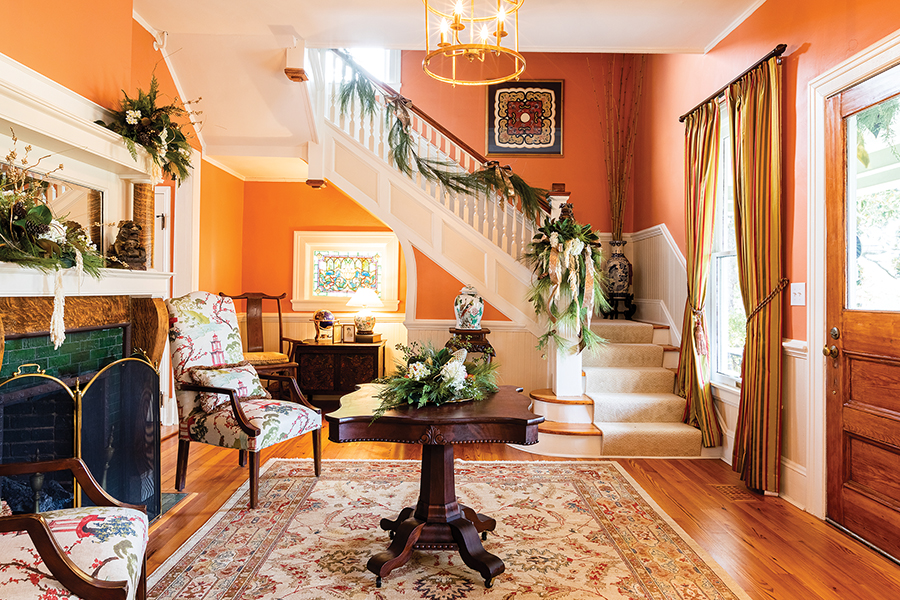 Regardless, buying and restoring them became his accidental pastime. In addition to the Pinehurst home, Boudreaux revamped the house next door (another one of Tufts’ original 38 cottages), renovated a 1930s Sears Roebuck on Dundee Road, then flipped one, two, three more fixer-uppers, all in Pinehurst.

Which brings us to his seventh and most recent project: a 1909 Victorian in downtown Aberdeen.

Situated on a spacious corner lot on High Street, the sage green double-pile with the classical Tuscan columns and wraparound porch once belonged to John W. Graham, son-in-law of Aberdeen and Rockfish Railroad founder John Blue. The exterior is grand yet understated, with an air of timelessness and restraint typical of Colonial Revival architecture. Boudreaux bought the National Register property in February of 2021 and devoted one year to its transformation.

“It’s got tremendous character,” he says, noting the 10-foot ceilings and crown molding, the butler’s pantry, the two-story semi-octagonal bay, original dogwood wallpaper in one of the upstairs bedrooms, and five charming fireplaces throughout.

An original stained-glass window defines the nook beneath the half-turn staircase. Natural light floods every inch of the 2,500-square-foot space. Upstairs, transom windows above bedroom doors offer charm and function.

Heart pine flooring was repaired and restored. Old doors and tiger oak mantels, once hidden beneath layers of paint, are now among the home’s most striking features. Ditto the banister, stairs and newel caps.

“Almost killed me,” says Boudreaux of all the stripping. He did what he could himself and hired help to do the rest. 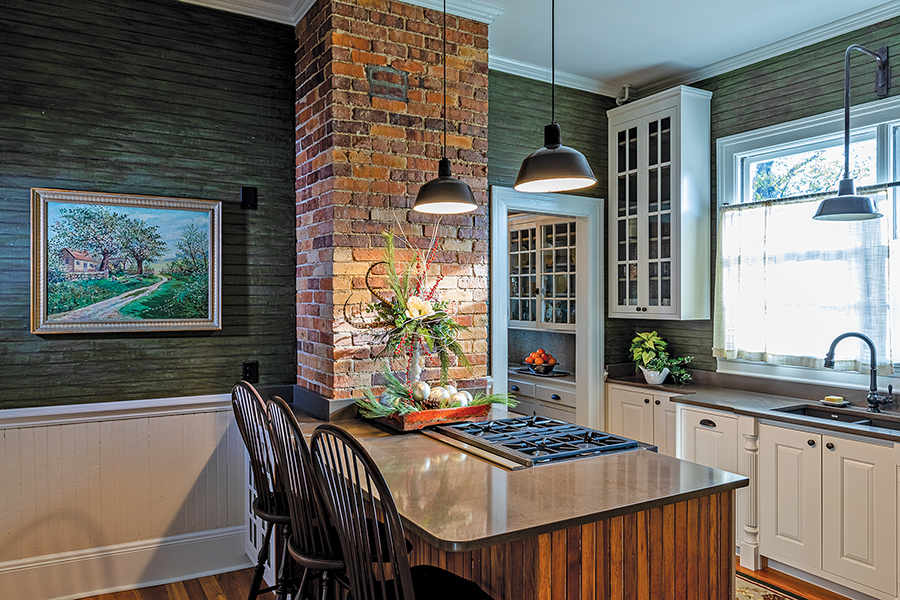 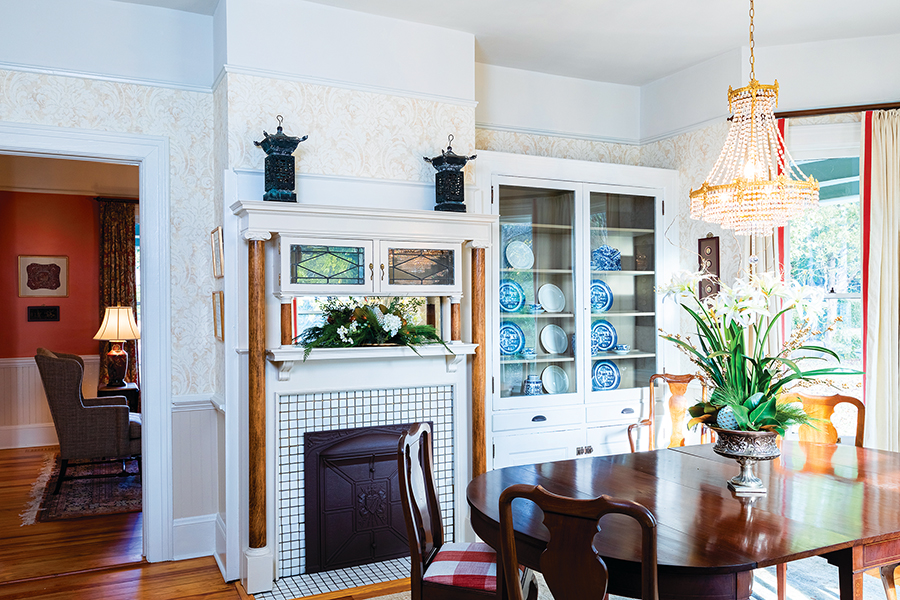 Boudreaux upgraded and reconfigured the kitchen, reintroducing an old entrance and constructing a small island with salvaged beadboard. He retiled and revamped existing baths (one full and one half); added a full bath upstairs; installed new cabinetry and quartz countertops; tinted original windows; exposed a bit of brick; updated plumbing, electrical wiring and appliances; replaced ductwork; and insulated the crawl space.

But he didn’t stop there.

Throughout the house, period-appropriate light fixtures (complete with ceiling medallions), fabric and furniture complement the architecture. 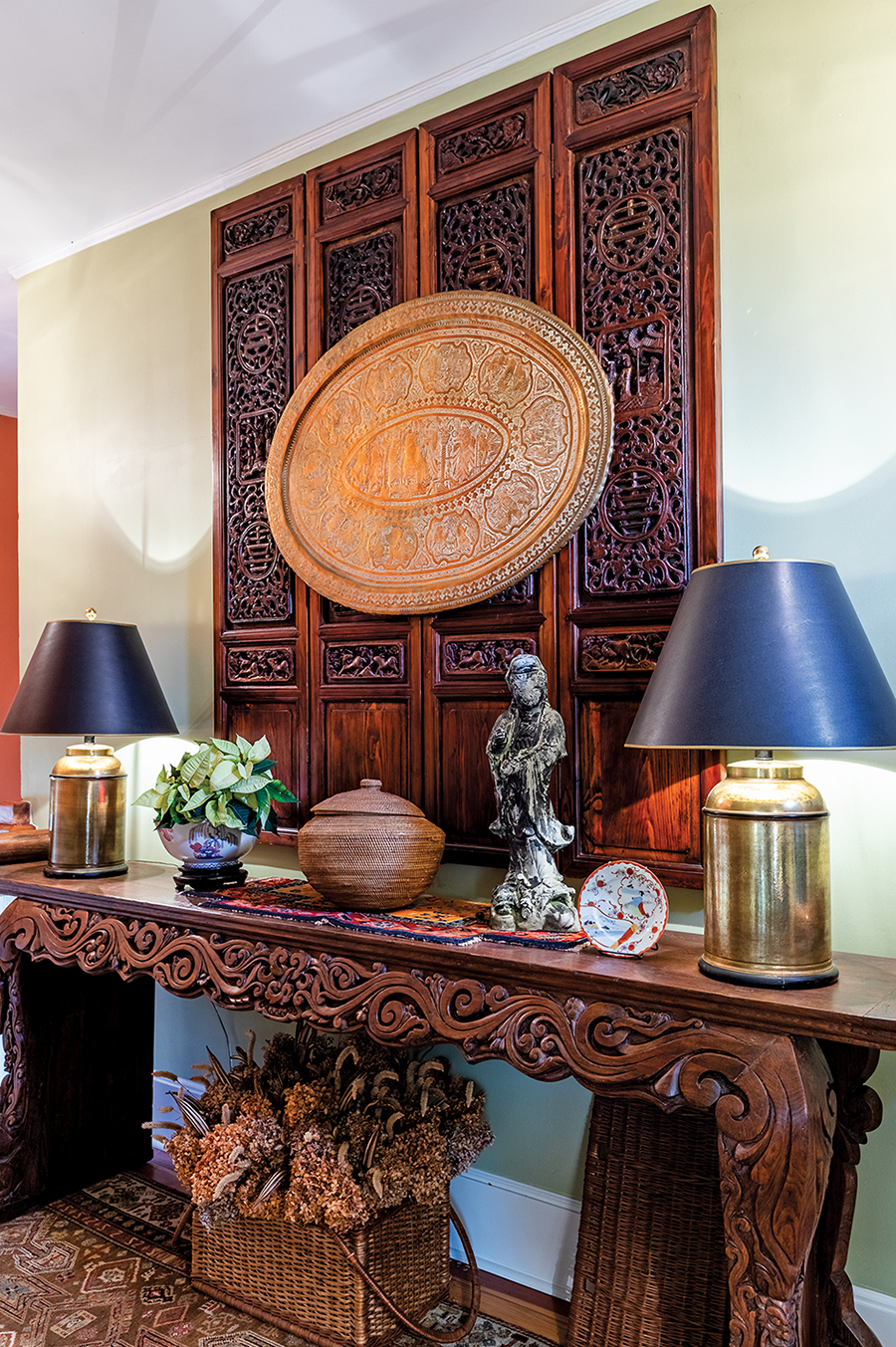 “I just love the search for antiques,” he says, which is how he crossed paths with interior designer Jane Fairbanks of The Old Hardware Antiques in Cameron. “I know what I like. Jane’s got it.”

Fairbanks helped Boudreaux outfit two of his Pinehurst homes in American country décor. “What he truly loves,” says the designer.

The interior of the Graham house is distinctly different. It’s an amalgam of color, texture and Victorian-era furnishings with a heavy emphasis on Oriental antiques —a marriage of tastes, his and hers. Flash back to China in the late 1990s.

“The oil company I worked for allowed us to transport one shipping container full of Chinese furniture back to the States on their nickel,” says Boudreaux.

Lynel, who worked as the assistant general manager at the Hilton Beijing, loaded up on ornate altar tables, hand-painted cabinets and intricate Chinese artwork — textiles in particular. Bart took Fairbanks to sift through the haul, in storage for over 20 years. Forgotten treasures were promptly dusted.

“They sort of became the inspiration for everything,” says Fairbanks.

Especially the colors. In the front parlor, coral walls pop against crisp white molding and cream-colored beadboard wainscoting. A hand-embroidered silk opera collar is framed and displayed on the wall above the staircase. Asian accent chairs covered in pagoda-themed fabric flank the fireplace, and a pair of wooden foo dogs (Chinese guardian lions) draw the eye to the quarter-sawn tiger oak mantel.

Beneath the stained-glass, a hinged easel frame displays photos of original homeowners John W. Graham, a cashier and officer of the Bank of Aberdeen, and his bride, Kate Blue Graham.

One wonders what Kate might think of the vibrant paint and forbidden stitch embroidery. 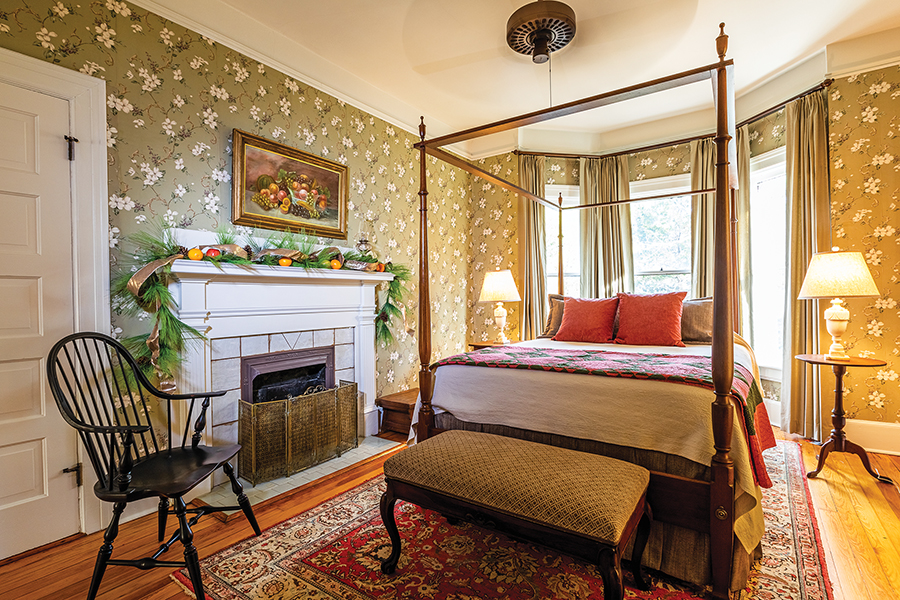 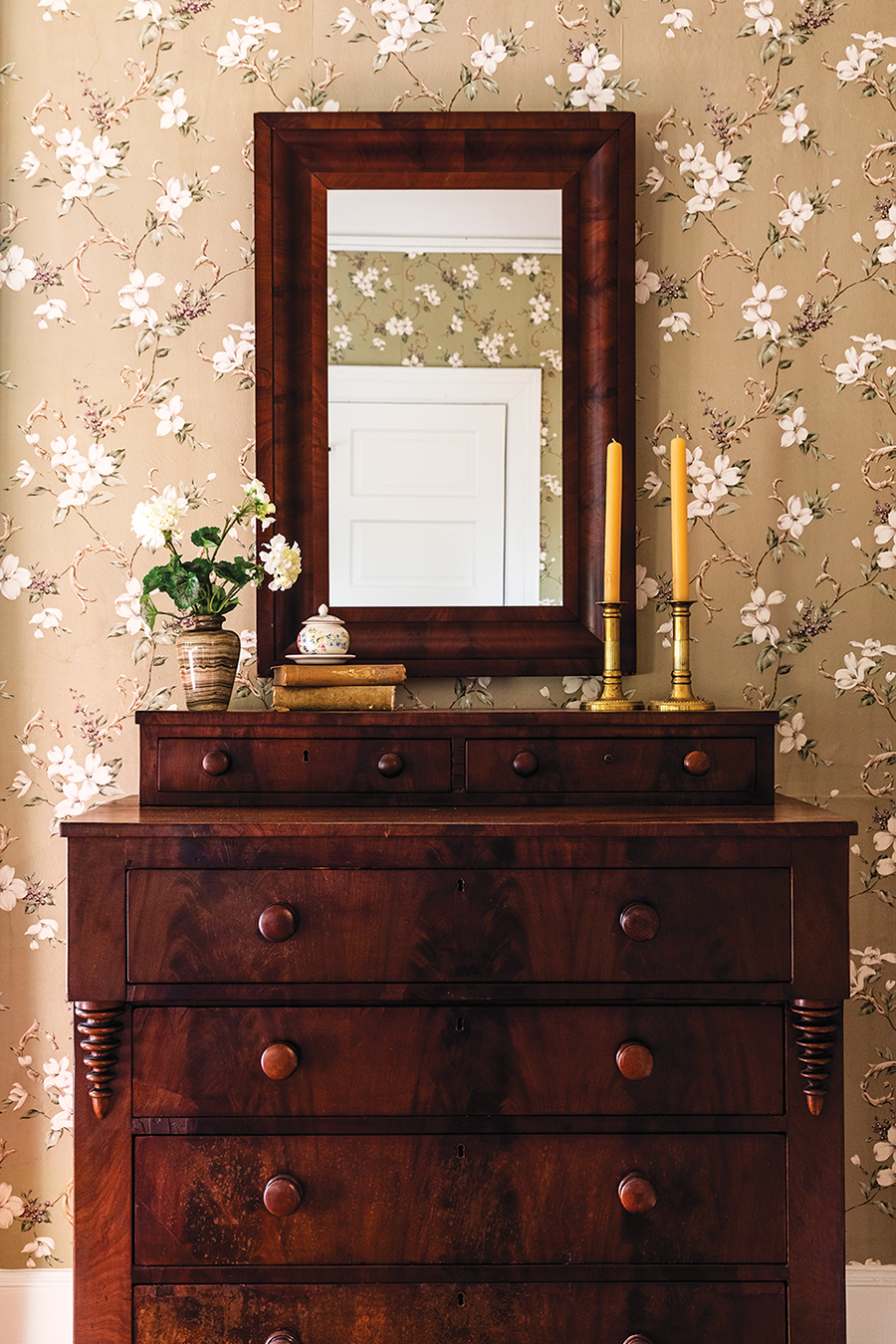 Beyond yellow pine pocket doors — “massive and heavy as led,” adds Fairbanks — coral walls spill into the living room, where a silk rug and custom curtains soften the space with delicate pink hues. This is where worlds begin to collide in a surprising way: an American country cherry corner cupboard (1840s), for instance, opposite a Chinese wedding cabinet featuring traditional brass hardware and a hand-painted imperial dragon.

For Lynel, each piece has a story, like the statuette of Guan Yin (female Buddha), positioned between the living and dining rooms.

“I bought her in a Beijing dirt market from a little blind man,” Lynel recalls. The vendor assured her that the wooden figure was quite old.

It wasn’t. The Buddha split in half a few weeks later.

“Sounded like a gunshot,” Lynel says between bouts of laughter. “She was new, made to look old . . . but I love her anyway.”

In the upstairs hallway, a teak altar table paired with a carved wooden screen make a bold and elaborate statement. The walls? Georgian Green by Benjamin Moore.

Bedrooms are handsomely outfitted. For one, an 1840s maple rope bed with curly maple headboard. A four-poster bed in another. The third features a faux curly maple queen anchored by an early 1840s blanket chest. Mounted oriental hair pins and an embroidered baby bib (and matching shoes) add color and whimsy.

“It’s just amazing how things can come from so many places and end up working so well together,” Fairbanks says.

The designer played a major role in bringing Bart’s vision for the house to life. “Big time,” he emphasizes. 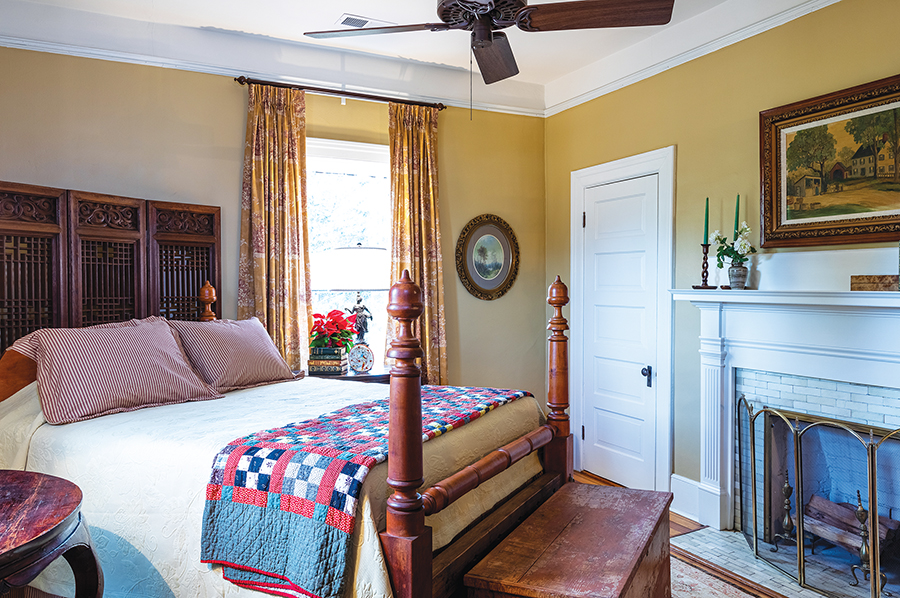 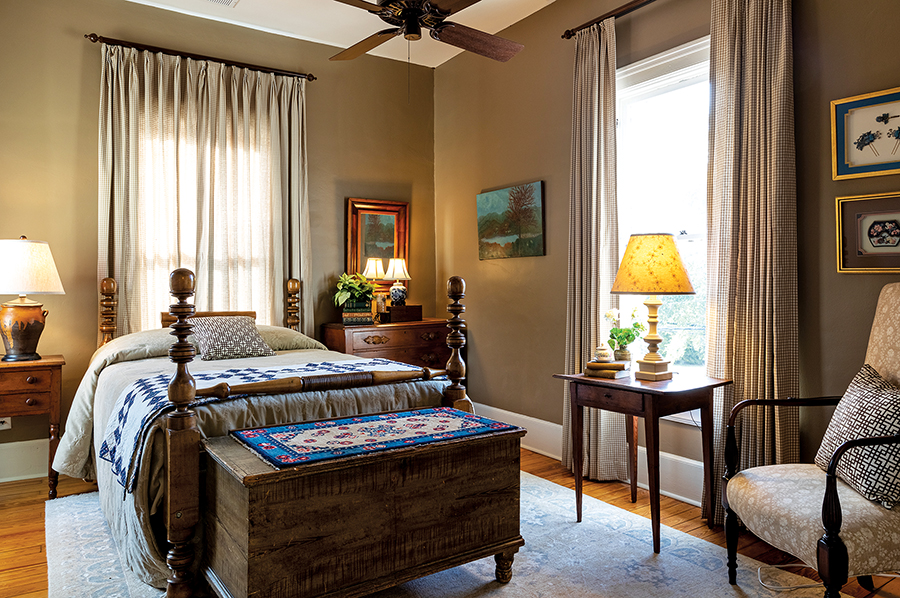 All parties seem equally delighted by how it turned out. In the past, Boudreaux’s modus operandi has been to revamp and resell. But the John W. Graham house is a keeper.

“Our Pinehurst house is on the market,” he explains.

Towns and dreams change. Bart and Lynel are moving back to Louisiana to be closer to family. The house on High Street will be their vacation home.

“Aberdeen is having a bit of a Renaissance, don’t you think?” says Lynel.

Bart’s golf clubs are there waiting. The house itself — a harmonious blend of tastes — is a labor of love ready to be enjoyed.  PS

Ashley Walshe, the former editor of O.Henry, lives up country and is dreaming up her next grand adventure.