Patrick Dougherty returns to the Sandhills

Nothing lasts forever, which is kind of the point. When Patrick Dougherty fashions one of his monumental structures, weaving sticks together as if he were knitting a medieval battlement from scratch, his internationally renowned art manages to make a permanent impact with a temporary footprint. It never strays very far from the notion that one day the wind will blow and this will all be gone — but not before we get a chance to revel in it.

Dougherty, who spent a large part of his youth in Southern Pines, will travel down from his handcrafted Chapel Hill home for the first three weeks of June when he, his son, Sam, and a cadre of volunteers erect what will surely be one of the final sculptures of his career in a space near the Ball Visitors Center at Sandhills Community College. Dougherty is 75 now, and all the lifting, toting, gathering and climbing integral to creating these magnificent, magical piles of sticks is young man’s work.

“One thing you find, it’s kind of like a sport,” says Dougherty. “You’re going to have injuries throughout your career.”

In Dougherty’s case, that career has spanned more than 35 years, leaving a trail of well over 300 sculptures behind him, indoors and out, from Mexico City to Copenhagen, Ireland to Italy, L.A. to NYC, Sheboygan to Savannah. He averages 10 installations a year, and he’s booked through ’22. After that, he’ll likely be trading his work gloves for fireproof mittens. 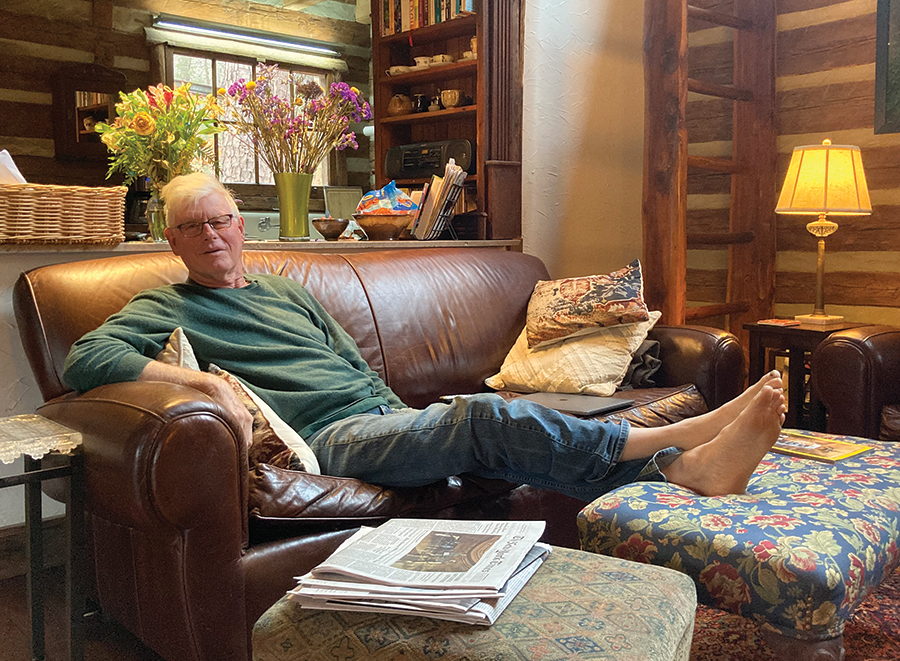 Patrick Dougherty kicks back in the house he built in Chapel Hill. Photographs by Jim Moriarty.

“Sam is a potter,” says Dougherty. “My retirement is going to be helping him. I’m going to work the kiln.”

While artists generally avoid labels the way Roadrunner avoids Acme explosives, art historians would describe Dougherty as a card-carrying member of the Land Art Movement, a group that includes luminaries like Robert Smithson, who constructed sculptures from scattered materials, and Christo, best known for wrapping landmarks in fabric. One of Dougherty’s stick sculptures was on view at Brookgreen Gardens at Murrells Inlet in South Carolina until Hurricane Isaias delivered the coup de grâce in 2020.

“We had one of the larger installations,” says Robin Salmon, Brookgreen’s vice president of Art and Historical Collections and Curator of Sculpture. “It was like a house with rooms and windows intended to invoke Atalaya, the Huntington winter home that was built on the property. It’s interesting how carefully planned his designs are. They have to be or they wouldn’t stand for as long as they do. Ours was on view for almost four years. In Patrick’s words, they are designed to last as long as they will.”

Dougherty was born in Oklahoma, the grandson of farming families on both sides. His father, a physician, moved to Southern Pines into a house on Grove Road when Patrick was in second grade. He graduated from the old Southern Pines High School on May Street in 1963, then majored in English at the University of North Carolina-Chapel Hill. “My dad was a doctor and I thought, well, I’ve got to be a doctor. I went through all my pre-med courses, but when I came up to the moment I was like, ‘I can’t do it,’” he says. Instead, he got a degree in hospital and health administration from the University of Iowa in ’69, entered the Air Force and shipped off to Germany. 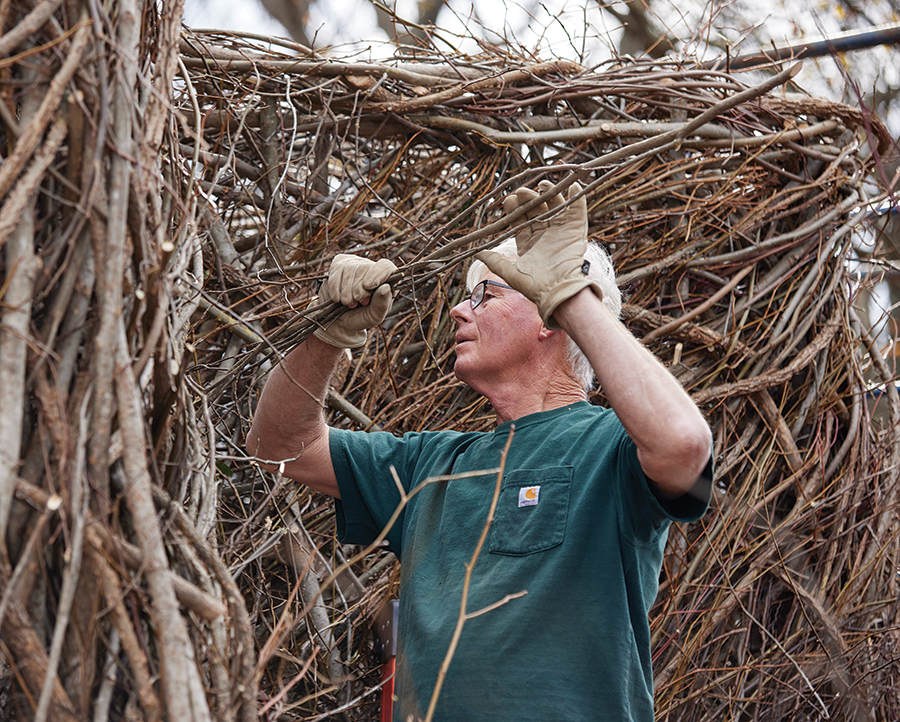 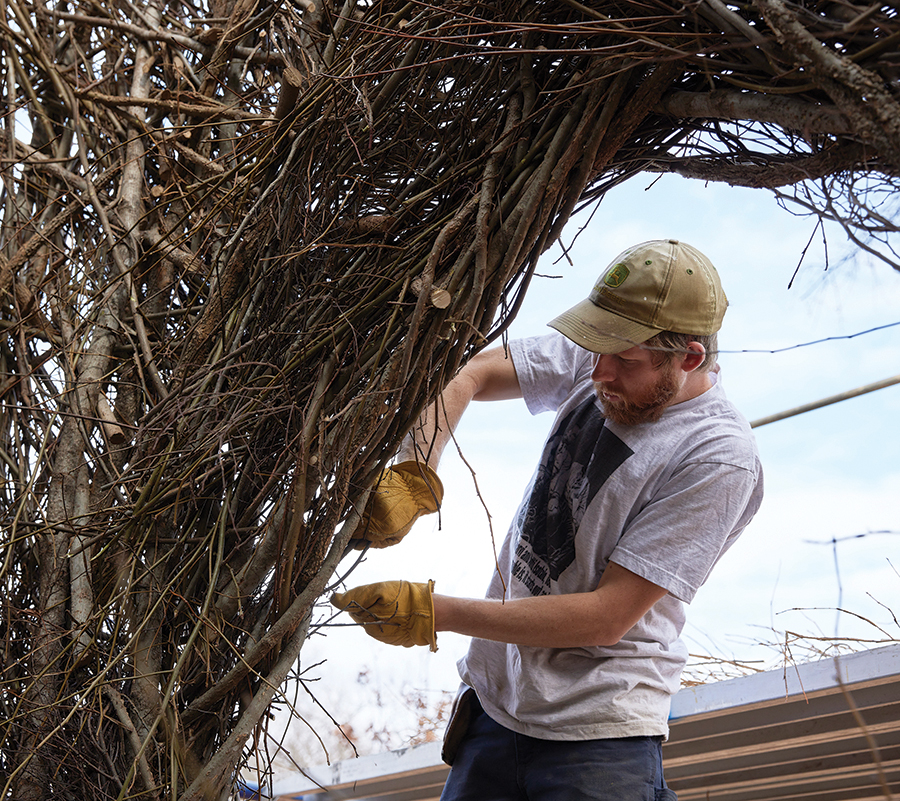 “When I was in the service, I was able to use their craft shop,” he says. A woman named Audrey Tuverson encouraged Dougherty’s natural inquisitiveness. “She had a graduate degree from Cranbook and knew how to do everything. Have you made a ring? Have you made a photograph? Have you repaired a piece of furniture? Have you made a clay sculpture? I got a real introduction to tools and to process.”

Once he was out of the military, it didn’t take long for Dougherty to realize hospital administration was no more for him than practicing medicine was. “Administration is kind of a dreary place if you want to be outside. I wanted to be outside and loved making things, so I decided I would go back to UNC,” he says. There he met one of the school’s sculpture professors, Mike Cindric. “You know, you just need somebody to give you permission. Particularly as an older person, if you go back to school — I was in my early 30s — you need somebody to say, ‘It’s all right. Go do what you want to do.’”

So he did. “It’s funny because if you’re a banker and you get out of school the bankers come and welcome you and say, ‘You’re a banker,’ and you know what you are. If you’re a sculptor you’re thrown out into the street and you don’t know what you are. But somewhere along the line you think, ‘I must be the real thing.’ It’s a bit more self-appointed awareness. Whether it’s popular or not depends on a whole lot of accidental things. My work turned out to be more relevant than some other work. The context changed from just being a found object to being connected to environmental issues.”

Like fashioning art from saplings gathered in woods, rain forests and swamps, nothing has gone to waste in Dougherty’s professional life. “All of your experiences are relevant to what you do. I started believing my sculpture life would be a lot better if I partnered with organizations. If you have kind of an administrative background, I wasn’t afraid to talk to the CEO. I also think having a degree in English literature turned out to be a stroke of luck. When you’re thinking about a novel, you love the way it is but the background noise is, how did they organize their words to produce an illusion that was compelling, that made you want to read it? For a sculptor, it’s great to look at people’s work, but what you really do is go further and say, ‘How does this work work?’ How does it become conscripted so you feel compelled about it?” 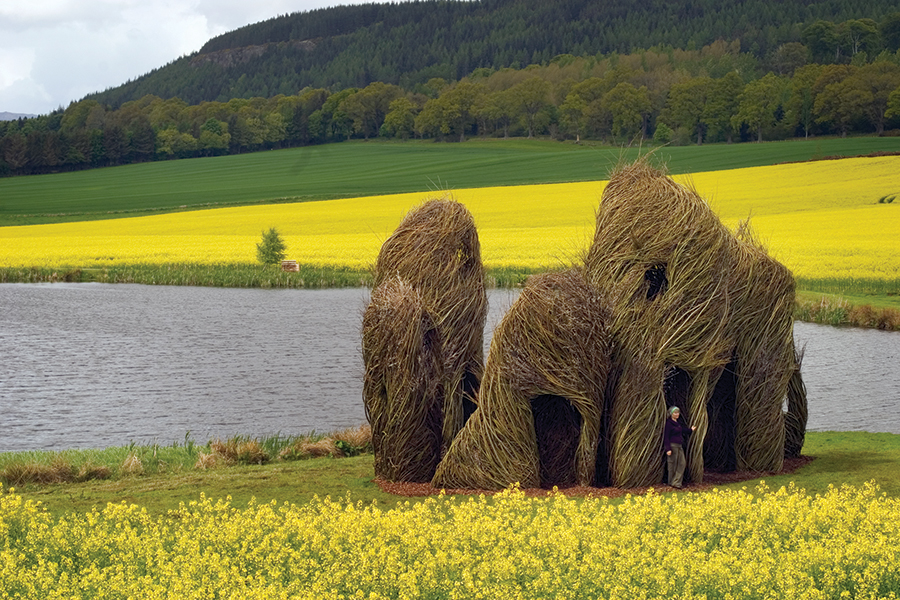 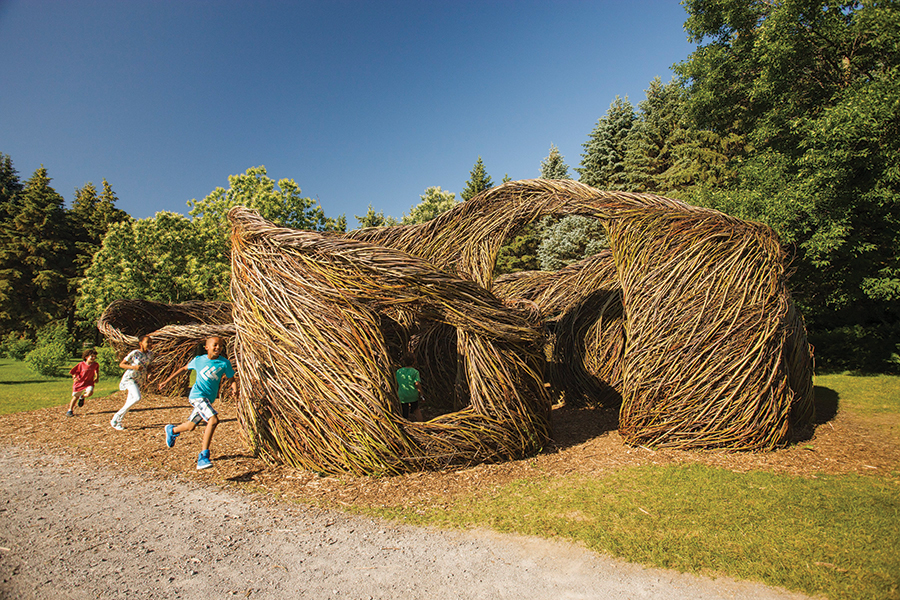 The ideas can come from anywhere. “We were in Montreal at the botanic garden. I got this idea that I would take a doodle and I would make it into a big sculpture,” he says. “I found a doodle on the internet I really liked. Lots of looping. We laid that footprint on the ground and then we thought, ‘What would it be?’ So, it had, like, 16 rooms, a million doors and windows, and this top that kind of worked itself around. Then that led to thinking about tattoos. A lot of them are unity symbols from ancient ruins so you kind of trace the ideas back to ancient community symbols and you find out what those are like. What if I laid something out that looked kind of like that?”

In Dougherty’s monograph Stickwork it’s clear that every sculpture has been its own adventure. “We see snakes all the time,” he says of the stick-gathering forays. “We’ve had snakes, alligators, bees. In Japan, I was working with a person who was kind of sponsoring me, Ueno Masao. Families celebrate their ancestors in these Shinto shrines and he said, ‘I’m allowed to work in this temple and you can live there and work. The family won’t mind.’

“So, we go to this temple up on this mountain. There’s a tin roof on top of this rice straw. The first thing we see is a giant snake on the porch. I say, ‘Mr. Ueno, we have that snake in North Carolina. That’s a copperhead.’ He said, ‘Well, that’s not the most poisonous one but you can’t kill them. They belong to the temple. If one bites you, call my wife and she’ll take you to the doctor.’ I said, ‘Mr. Ueno, does your wife speak English?’ He said, ‘No, she doesn’t.’ The moral of this story is you can only stay awake for three days, then you say, ‘Go ahead and bite me.’ You can’t take it any longer.”

Because Dougherty enlists the help of volunteers in the harvesting of saplings and the construction of the installation itself — he generally relies on four volunteers in the morning and four in the afternoon throughout the three-week process — there is a decided community-building, almost a performance art, aspect to his work. “They’re the folks that call the newspaper or bring their friends or bring their grandchildren to look at it,” he says. “And it’s more advertising than you could ever hope for. If you’re working in a park in Savannah, the people who are calling the police the first day about the saplings getting dumped out are inviting you to dinner the last day. There’s a transition as people move from thinking you’re a nut to thinking it’s beautiful and glad that it’s in their neighborhood.” 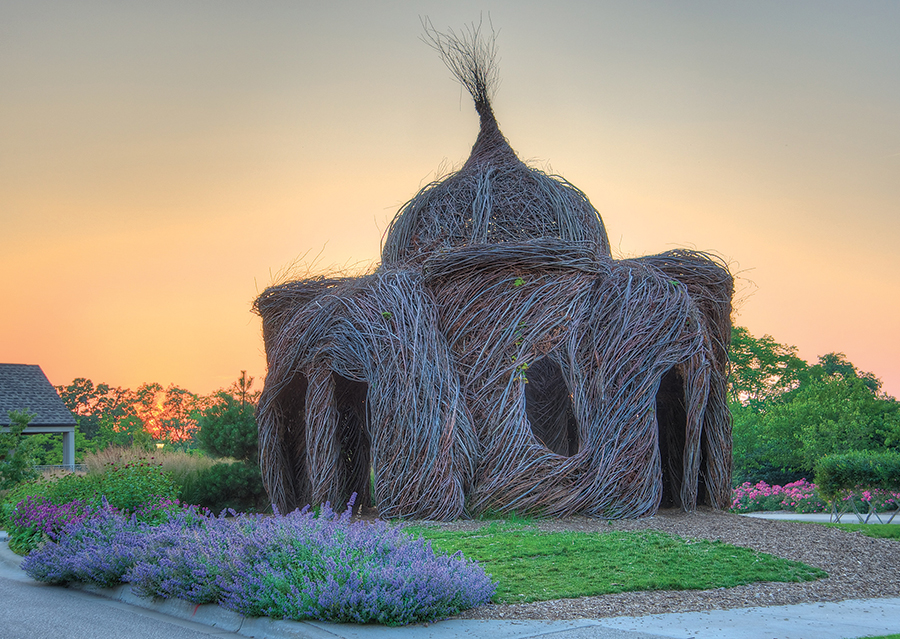 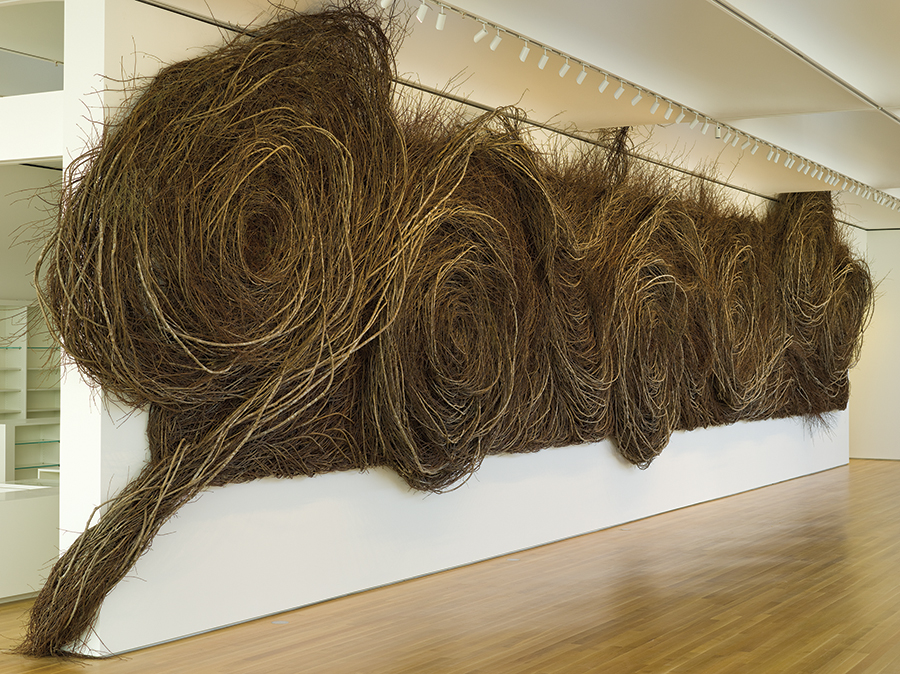 Though the temporal nature of the work is part of its DNA, Dougherty has a photographic record of all his sculptures which, in a way, makes his pieces no more transitory than an Ansel Adams print. “The concept of impermanence has become more acceptable than it used to be,” he says. “Your phone goes out, you get another one. I think a sculpture wears its site out. You can move it and it becomes relevant again, but in terms of just the placement and the excitement that goes around it, over a period of time, it just winnows the relevance out.

“I think objects are imbued with ideas that go with them, that are relevant to the site and to that moment, to the students or people on the street or whoever is seeing it. Once they have accommodated themselves to the idea, it just becomes less and less. Art history has to take care of itself. My problem is to make things that are provocative and relevant and informative and make people want to look at them.”

That’s the path that has brought Dougherty back home and close to the end. “Who knows what’s good in the future?” he says “A lot of things are remembered. My career has been great and it’s almost finished and I’ve done the best I can.”

The evidence will be on display in the town of his boyhood, to last as long as it will.  PS

Dougherty will be holding a book signing in conjunction with The Country Bookshop at Weymouth 5 p.m. on Wednesday, June 9.

Jim Moriarty is the Editor of PineStraw and can be reached at jjmpinestraw@gmail.com.