Blinkbonnie is larger than life 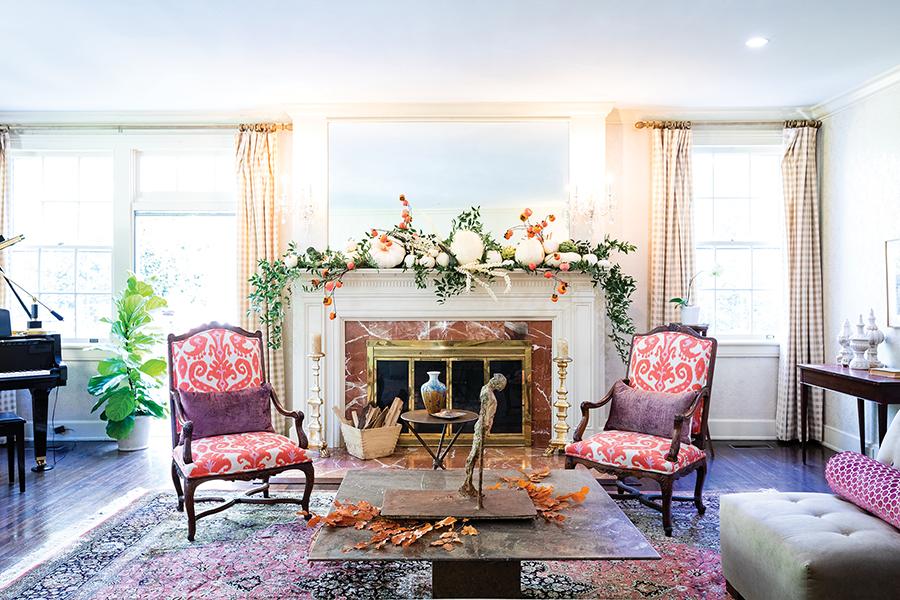 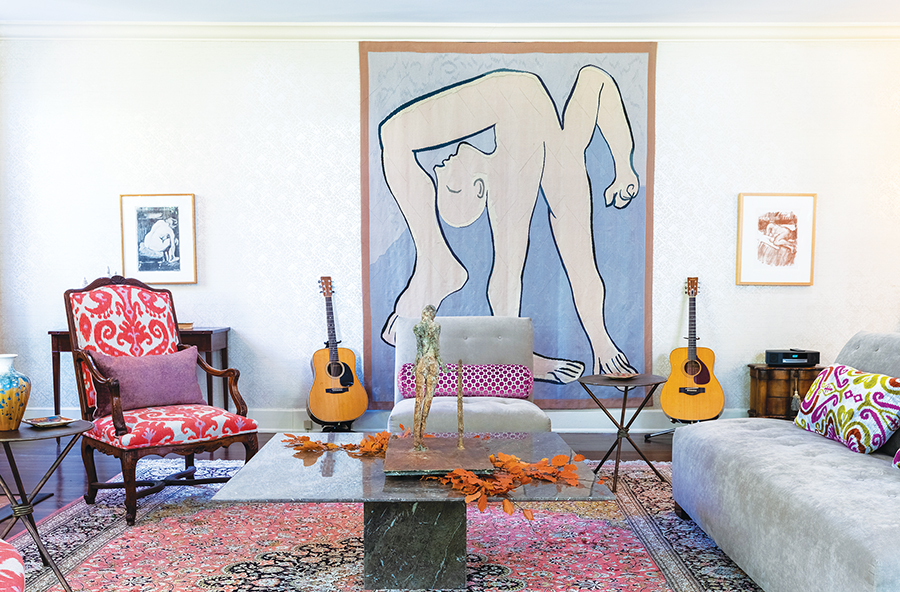 Bigger-than-big. Practically enormous. This residence is proportioned for an era of grandeur.

Scarlett would recognize the Tara-esque columns, while the European antiques gleam as though polished by Mr. Carson, the butler on Downton Abbey, who might appreciate the triple-sized butler’s pantry, too. Remove the runner and its length suits bowling. A grandfather clock reaches for the ceiling. The pool and pool house/sauna would eclipse those of most hotels. There are five bedrooms, six bathrooms, three home offices, a basement of ballroom dimensions, multiple gardens, even a fenced dog park for mini goldendoodle Lilly.

Just living there could be an aerobic workout.

Of course Pinehurst Old Town centenarian Blinkbonnie has been updated, enlarged and repurposed by several occupants. An added-on portico may seem incongruous to the Dutch Colonial architecture with gambrel roof, yet the house clings in spirit to an original purpose: genteel, happy times when conversation was an art and money flowed like prohibition whiskey during Pinehurst’s fashionable winter “season.”

But times have changed, as has Blinkbonnie — Gaelic for “a glimpse of beauty.” Its most recent iteration: a refuge where owner Lisa Youngclaus escaped COVID by floating on the pool with her friends or, on a rainy day, dawdling in the 2,000-volume library where books are color-coded, or maybe even having a go at the full-sized billiards table in the finished basement where her son and friends once hung out. 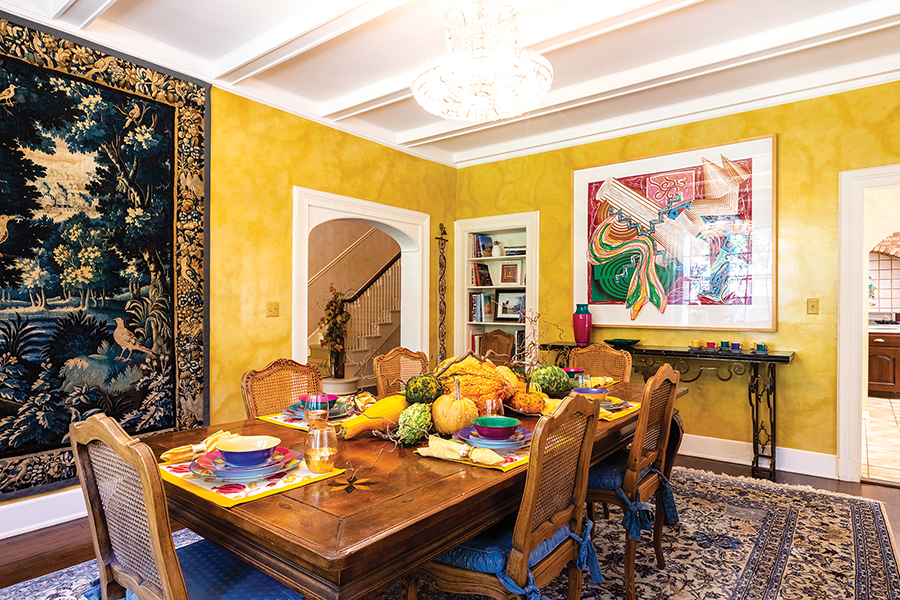 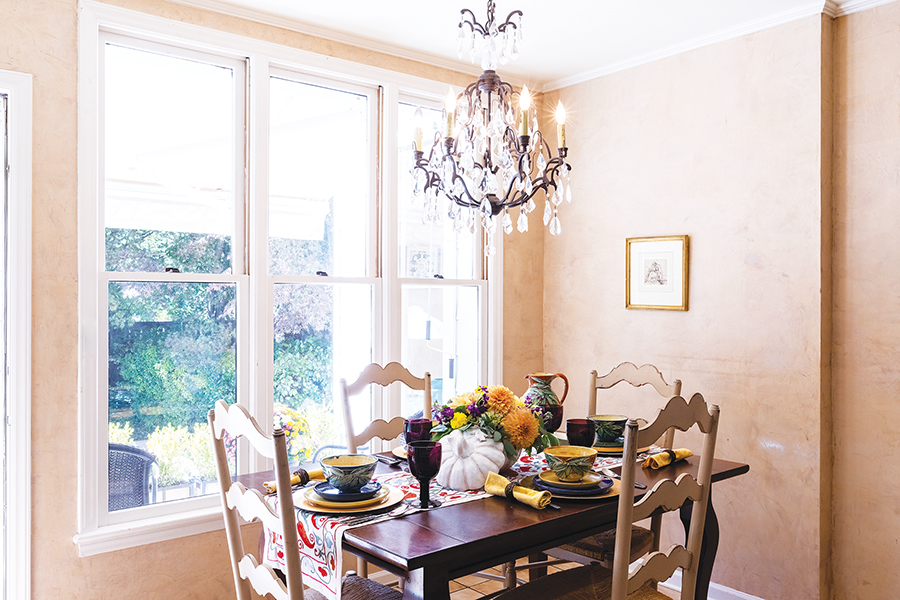 The story starts, as do other Pinehurst homestead histories, in the early days of the 20th century. In 1917, Simon Chapin of New York, a major developer of Myrtle Beach, got word of the vacation enclave the Tuftses were building. Liking what he found, he built what is now called While-Away Cottage for his family on Blue Road and this larger estate for his sister, Mary Alice Chapin May, on nearby McCaskill. She wasn’t there long. In 1920 the house, by then owned by Dickenson Bishop, was christened Bishop’s Cottage. Several owners followed, including someone identified as “well-known sporting figure” Jay Hall, and Pinehurst mayor Steve Smith and wife, Becky.

Golf drew Bill and Lisa Youngclaus, both advertising executives living in Chicago, to Pinehurst, where they owned a weekend home at Country Club of North Carolina. After their son was born in 1996, Lisa retired and the family moved to Pinehurst full time. 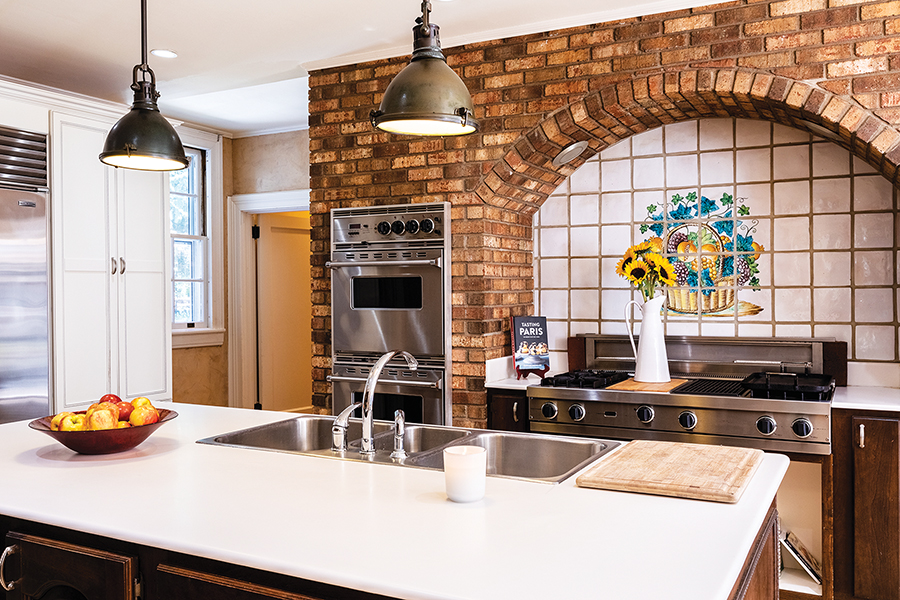 But the CCNC pied-à-terre wasn’t big enough for gatherings of the blended family. Besides, Lisa and Bill had spent a year in Paris, where she collected antiques on a grand scale, as well as art and assorted museum-quality objets begging a suitable venue. How many houses offer a double-wide foyer, intricate eyebrow moldings, bay windows, high ceilings, interesting wallpapers, chandeliers by Baccarat of Paris, a 30-foot-square living room dominated by a baby grand piano, drums, and an Aubusson tapestry of Pablo Picasso’s painting The Acrobat? The contorted abstract is flanked by contemporary armless sofas and antique French tables. Complementing this Picasso are several look-alikes Lisa found on Bald Head Island and had framed. On the floor, a silk rug from London. On the ceiling, strategically placed recessed lighting.

Yet, amid such splendor, Lisa chose checked gingham drapes hanging from a dowel rod. “I like to mix the old and the new,” she says, which explains a TV den with grasscloth walls, and sectional sofa in rust and sand tones that she calls her winter room. There are surprises, too, like the bathroom with a stained glass window and clawfoot tub, and a sunroom enhanced with blues, wicker and graceful ceiling details. 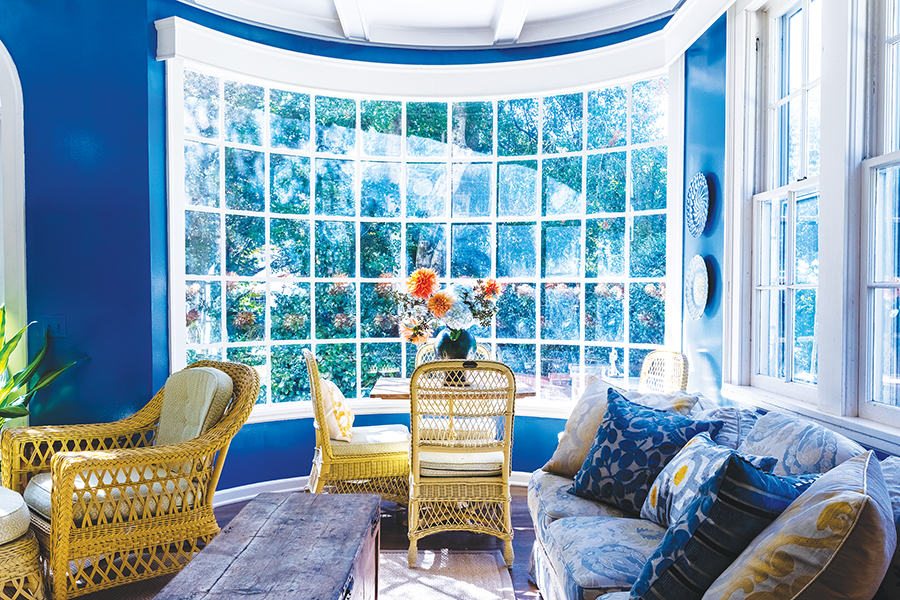 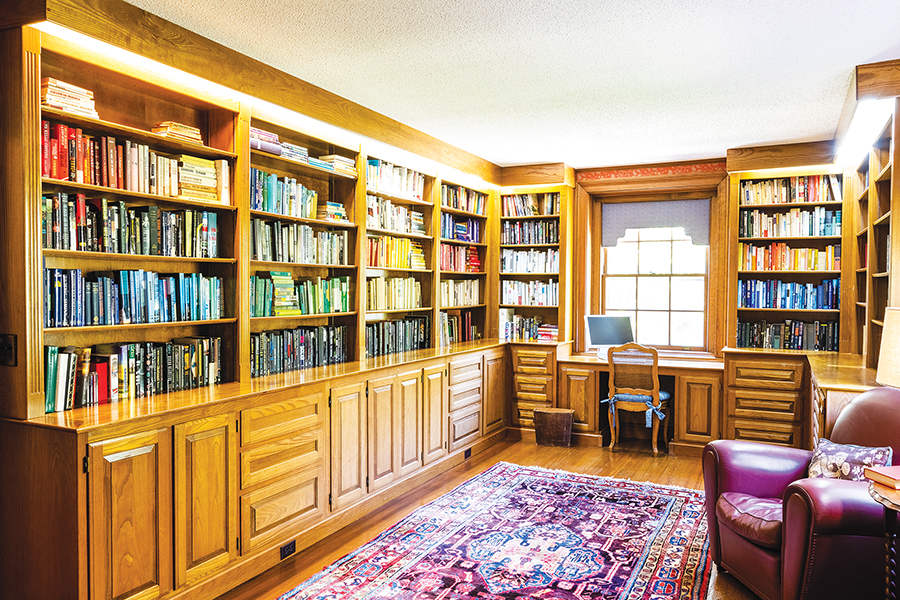 “I couldn’t believe it when we first walked around the house. I could see how our furniture fit the spaces. There was a place for everything,” including a giant French poster circa 1888, advertising an art exhibit in Brussels, that dominates the staircase landing. 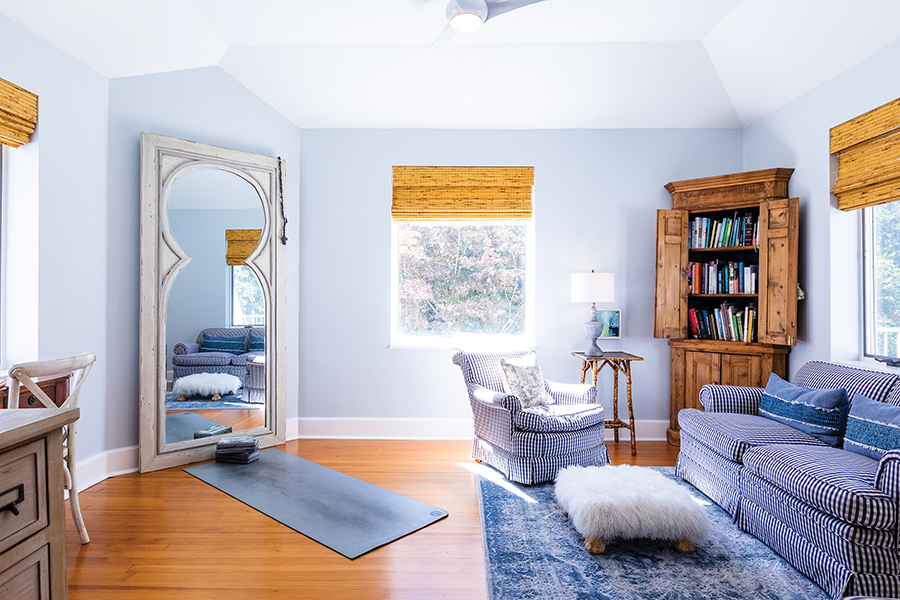 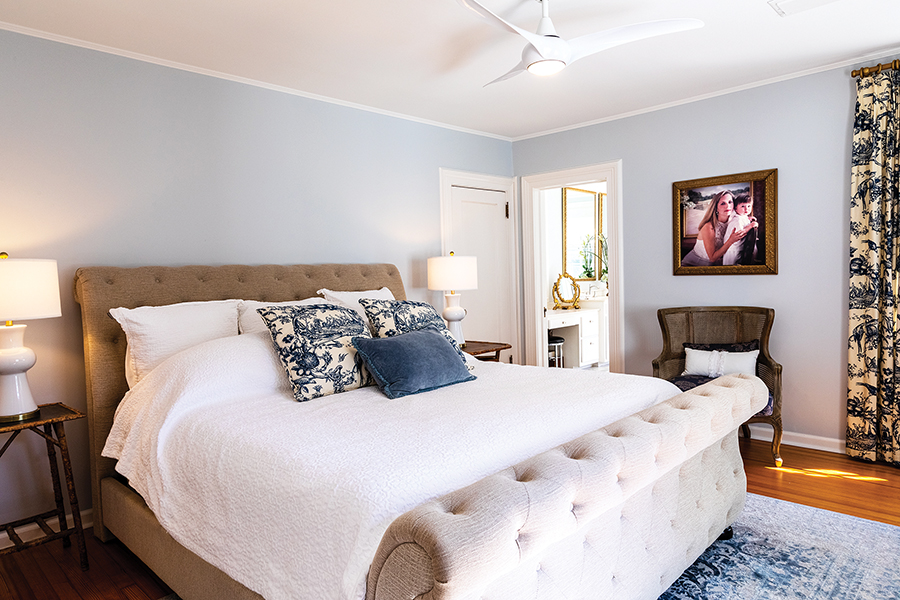 Lisa remodeled the kitchen when they moved in but left the dark wood cabinetry, which she preferred to sterile all-white. She also kept Venetian plaster walls in a creamy hue but refreshed the master suite in blues and white, which continues into an adjoining sun/yoga room, her “serene retreat.”

Lisa is a yoga instructor who has traveled to India to import icons and other merchandise for studio boutiques. In her own home she successfully juxtaposes these pieces with formal European furnishings, a 17th century tapestry and contemporary art. Yet, given copious space and absence of clutter, each piece stands out, ready to tell its story. 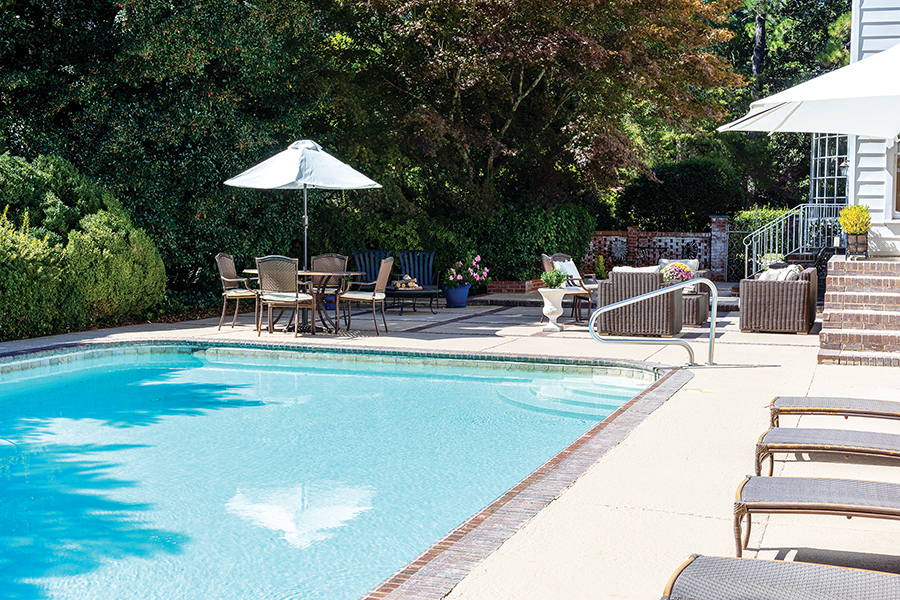 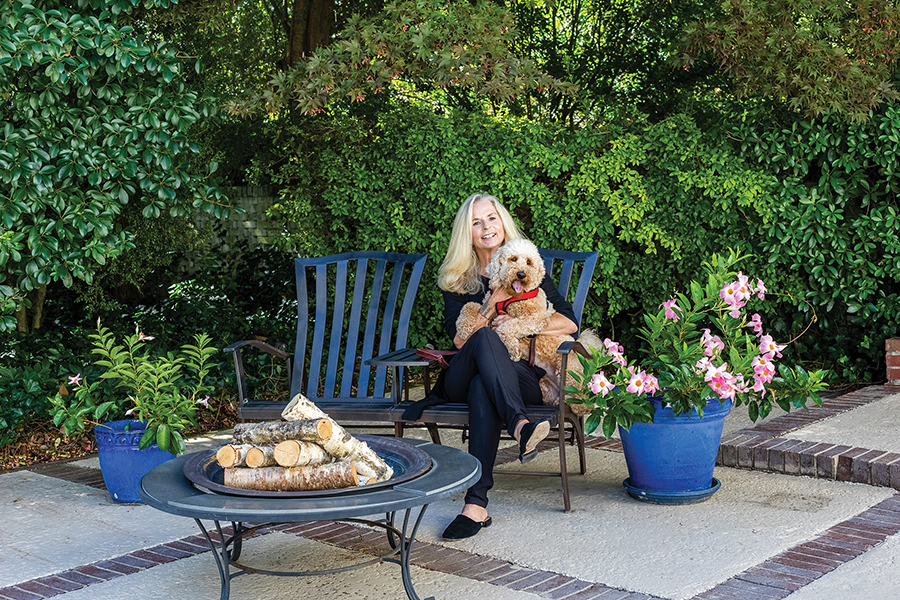 Time passes, circumstances change. Bill died in 2006. Their son, a musician, is still close by, but Lisa’s step-grandchildren are grown. “When your family changes you make a new family, with friends,” Lisa says, recalling a recent birthday binge given by 15 girlfriends, her sisterhood. “I’ve matured with the house, from babies to kids hanging out in the basement.” To now.

But for Lisa one thing remains constant: “When I get up in the morning and walk down the stairs I think, OMG, look at the arched windows, the doors and everything else. I’m so lucky.”   PS