Age just a number for Carolinas Hall of Famer

Thirty years ago, Paul Simson showed up at the Carolinas Mid-Amateur Championship at Yeamans Hall outside Charleston and realized he forgot to pack his putter before the drive down from his home in Raleigh. He was lamenting that fact in the parking lot when fellow competitor Vic Long said he had an extra Ping Zing putter that Simson could use.

“I shot a career round — a 62 with two eagles and a hole-in-one,” Simson says. “Obviously I asked Vic if I could keep the putter. I gave him a couple dozen balls and we called it square. If a putter feels good and you win with it, how am I going to change?”

Today that putter sits in the Zan Law Hall of History at the Carolinas Golf Association headquarters in Southern Pines, the club having drained scores of birdies and eagles as Simson stormed his way through dozens of amateur golf titles on statewide, regional, national and international levels. Simson retired the club in 2012 in favor of a newer version of the same putter — updated design, tweaked with improved balance and metallurgy qualities.

And the newer Ping Zing Redwood performs quite well, thank you.

“My game is still competitive,” says the 68-year-old Simson. “I’ve had a handful of high finishes and am very competitive 13 years into senior golf with the guys just turning 55. I’m fairly pleased with the state of affairs.”

On the cusp of 2020, Simson has his schedule mapped for a full slate of regional events as well as the British Senior Amateur at Royal Cinque Ports on the Southeast coast of England, the U.S. Senior Am at the Country Club of Detroit, and the Canadian Senior Am at Pleasant Glen Golf Resort outside Vancouver. This year’s N.C. Senior Four-Ball will be contested at Mid Pines in August.

“Some of the travel logistics will be challenging,” he says. “But I’m looking forward to another year. I had some successes in 2019 but some disappointments as well. I look back on 2019 with mixed emotions.”

The highlight of 2019 was teaming with Don Detweiler, a fellow Raleigh resident and Northridge Country Club member, to win three CGA senior four-ball tournaments and give them nine team titles together. One of the victories was by 10 shots when they teamed for 63-62 scores in lapping the field in the Carolinas Super Senior Four-Ball in October at Mount Vintage Golf Club in North Augusta, South Carolina.

“We’ve really been able to shoot some spectacular numbers,” says Simson. “It’s kinda fun to get that far ahead and just cruise along and enjoy yourself. Don is such a good partner and such a good friend, and our partnership has been a very special part of my golf career.”

The burr in his saddle, though, was not winning an individual title and in fact shooting an uncharacteristic 77 in the final round of the Carolinas Super Senior at Green Valley Country Club in Greenville, South Carolina, in August. Simson led after the first round with a 65, but stumbled and allowed Russ Perry of Winston-Salem a window for a five-shot win.

“You would think after as many competitive situations I’ve been in over the years, I wouldn’t still have to work on patience,” Simson says. “But you know how golf is. Somehow it will get under your skin, and you become frustrated and try to force things. You can’t force a golf game. Frustration is what will compromise a good golf score. In two or three events, I made a few mistakes, and rather than focus harder on the upcoming holes, I focused too much on the mistakes I made. Once you hit a golf shot, there’s not a whole lot you can do about it.

“I’m just disappointed I have to keep learning the same axioms. Everyone knows you have to be patient, just like everyone knows that hard swings don’t produce good shots. But guess what — we swing hard all the time.”

Simson’s day job is vice president at Towne Insurance Agency in Raleigh, a career that gives him freedom to travel for lots of golf. He has played in 64 USGA competitions, including the 1998 U.S. Open at The Olympic Club in San Francisco, and 2020 will mark the 36th straight year he’s played in a USGA event. He has won two U.S. Senior Amateur titles (2010 and ’12) and three British Senior Ams. Simson is in the Carolinas Golf Hall of Fame and has collected 38 CGA titles — the most in history. Among his highlights in the Sandhills was winning back-to-back North & South Amateurs at Pinehurst No. 2 in 1995-96, and teaming with son Phillip to win three Carolinas Father-Son titles (2002 at Foxfire Golf & Country Club, 2013 at Seven Lakes Country Club and 2014 at Pinewild Country Club).

And to think — it all started with that Carolinas Mid-Am victory 30 years ago, followed by a breakout three-win summer in 1991.

Simson was fighting a nasty hook in June of 1991 when the N.C. Amateur was played at Alamance C.C. in Burlington. John Maginnes, a young player just out of East Carolina University, had his eyes on the pro tour, but before turning pro shot 65-65 in the first two rounds to take a seven-shot lead. One of his distant pursuers was Simson, who Maginnes says at the time was “some insurance salesman from Raleigh no one had ever heard of.”

Simson opened with a 73 at Alamance and was trying to find something that worked in his warm-up session the next morning.

“Paul, you’re taking the club back way inside.”

Simson looked up and saw friend and fellow competitor Mac McLendon of Lenior standing behind him. 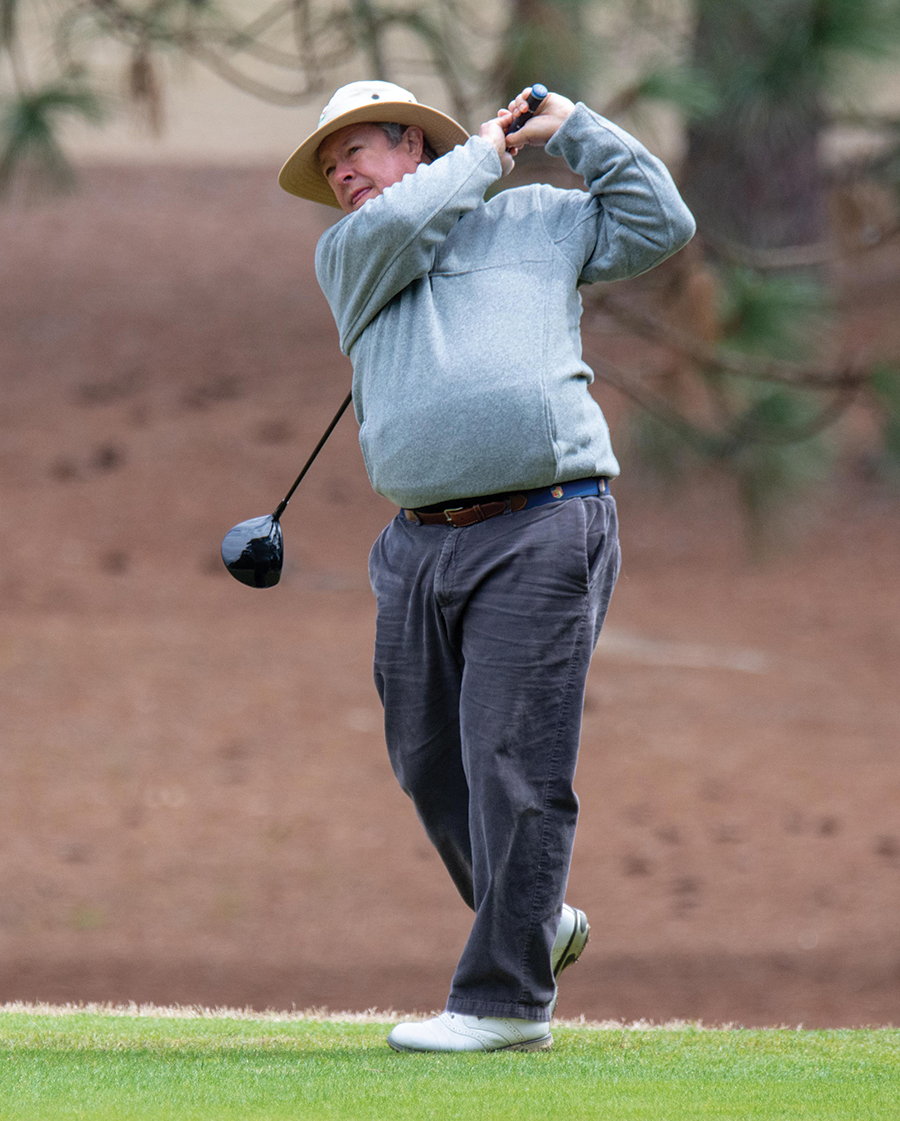 The light bulb popped on.

“At the time we were still playing balata balls, so any imperfection in your swing made the ball really curve,” Simson says. “I was having a terrible time fighting the hook. Sure enough, I started taking the club back on a straight line and started hitting the nicest draw. That put me on plane.”

Simson shot a 65 that day but was still eight shots behind Maginnes at the halfway mark. But that swing tweak wasn’t a one-day wonder. He followed with another 65 on Saturday while Maginnes played well but hardly lights-out, posting a 70. Still, Simson was down by three entering the final round.

A theme emerged that weekend that would wreak havoc in the Carolinas golf community for years to come: working man with a few less hairs and a couple extra belt notches vs. 20-something with a limber back and unlimited hours to play golf. Simson shot a 69 on Sunday and Maginnes a 73, with Simson making a clutch 8-footer to save par on the last hole and win the title by one stroke.

“So Paul Simson wins his first-ever championship in the state of North Carolina and now has set so many records they’ll never be broken — never be broken,” marvels Maginnes, who did play the pro tour but now is a full-time golf broadcaster.

“That was a real thrill,” Simson says. “I went from relative anonymity to being on the front pages in the golf community. That win gave me a little momentum. I had finished second in 10 or 12 CGA events before winning in 1990. I knew then I could win. Winning the State Am the next near kind of opened the floodgates.”

“Ninety-one was a very good year,” Simson says. “I have very fond memories. That year really propelled me into a situation where I could step up my game and compete on more of a national level.”

For three decades in the Carolinas, Simson’s trademarks have been a straw fedora, an arsenal of greenside recovery tricks, and an easygoing demeanor effectively countered with an intense zeal to win.

“I think as you get older, you mellow out a bit,” Simson says. “I just love to play, and I love the competition. I get a charge particularly out of playing the college kids I don’t know that well. You beat some of these guys and they say, ‘How’d he beat me? He’s not as good as I am.’

“But in the end, this is a game you play for fun. It’s a lot easier to play for fun than to take it so seriously you make yourself miserable.”  PS

Chapel Hill-based writer Lee Pace has written about great golfers of the Sandhills and Carolinas for more than three decades. Write him at leepace7@gmail.com and follow him at @LeePaceTweet.