Going nowhere and getting it done

Call it quarantine, call it shelter in place, even house arrest. Call it going stir-crazy, looking at the same four walls, weeks on end.

Wait a minute — those walls need painting. Those floors could use a once-over. And how about creating something wild in the kitchen?

See how these residents turned home confinement into home improvement. 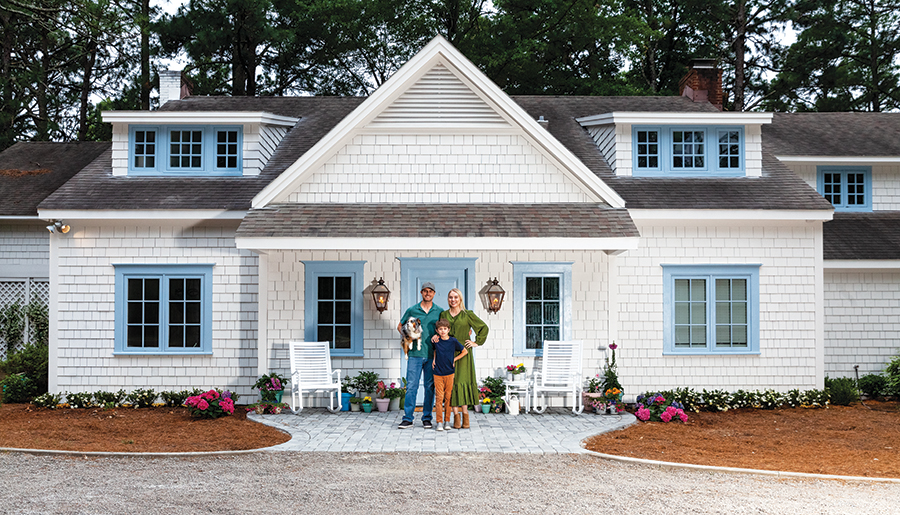 If beauty is only skin deep, the house Jaime and Erik Hoffman purchased in Weymouth desperately needed a dermatologist. Could anything be uglier than cedar shakes painted dark brown, with yellow trim? “Dingy and dated” was Jaime’s assessment. They decided on a radical transformation to white, with blue trim on the paned and bowed windows. Problem was, quotes came in upward of $11,000.

Let’s give it a try, they decided, although neither had ever painted exteriors. This might be just the thing to while away the quarantine, especially since the weather was sunny and warm.

But that many window panes and frames would drive even Pete the Painter to drink. With the help of Google and YouTube, Jaime learned that windows could be covered with Frog tape. Even so, she had to open the upstairs windows from the inside and stick her head out to reach the trim.

The job took a week, with Jaime and Erik surviving as friends. Only casualty, their dog, who sat in the paint, necessitating a butt shave.

“Now, our house is bright and happy, like a (Nantucket) cottage,” Jaime beams.

Bright, happy and the talk of the neighborhood. “The best part was that neighbors stopped by and we talked from afar. That way, we got to meet people.” 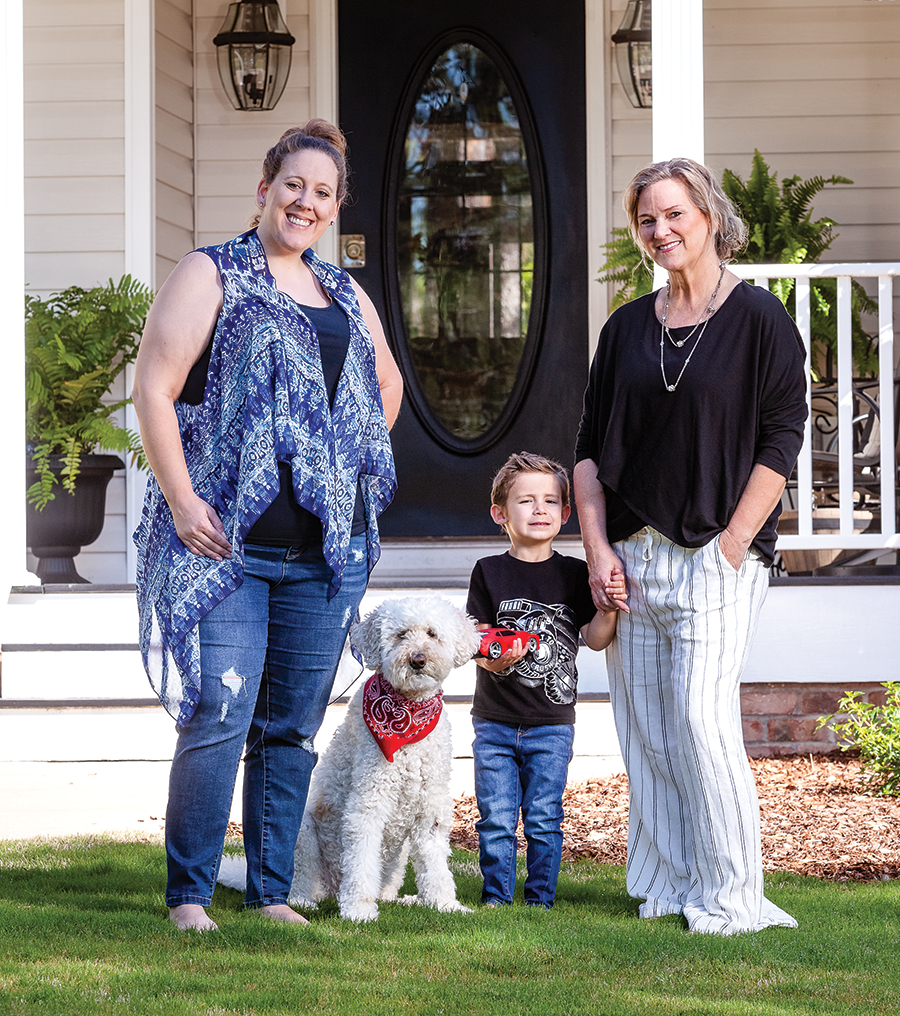 Recognizing and implementing trends were part of Susan Clark’s job, when she staged houses in Arizona. Makes sense she would apply this to her own home, recently purchased near Lake Pinehurst, with multiple paneled doors, all white. “Boring . . . ” Clark tried painting them grey. Not quite. “Black seemed like a trend,” part of the popular nouvelle farmhouse style. So she painted the (previously green) front door and all interior doors black. Green floorboards on the porch — equally passé — now sleek black, too.

“Everything in the house is in transition,” Clark admits, which is therapy for quarantined DIYers. Otherwise, Clark would be helping out at the uber-trendy Pine Scones Café in Southern Pines.

Clark didn’t stop at the doors. “I love the beach. We hope to retire there.” Until the time comes, this granny thirsting for salt water created a coastal bathroom more complicated than hanging a starfish over the shower. She liked a shiplap effect: boards, either left natural or painted white, mounted horizontally on the wall. Why go to the trouble and expense when she could draw horizontal lines with a Sharpie? Turned out the marker was less than permanent. Dampness made the lines run like weepy mascara. A contractor-grade marker wasn’t much better. She achieved an acceptable result by painting over the lines with two shades of white, which resemble horizontal boards. Add some industrial shelving, touches of ocean blue, rope glued around a mirror and she can practically hear the gulls strafing the trash can.

Outside, Clark and her grandson planted veggies and watermelon in raised beds.

“These projects made the quarantine more bearable,” she concludes. 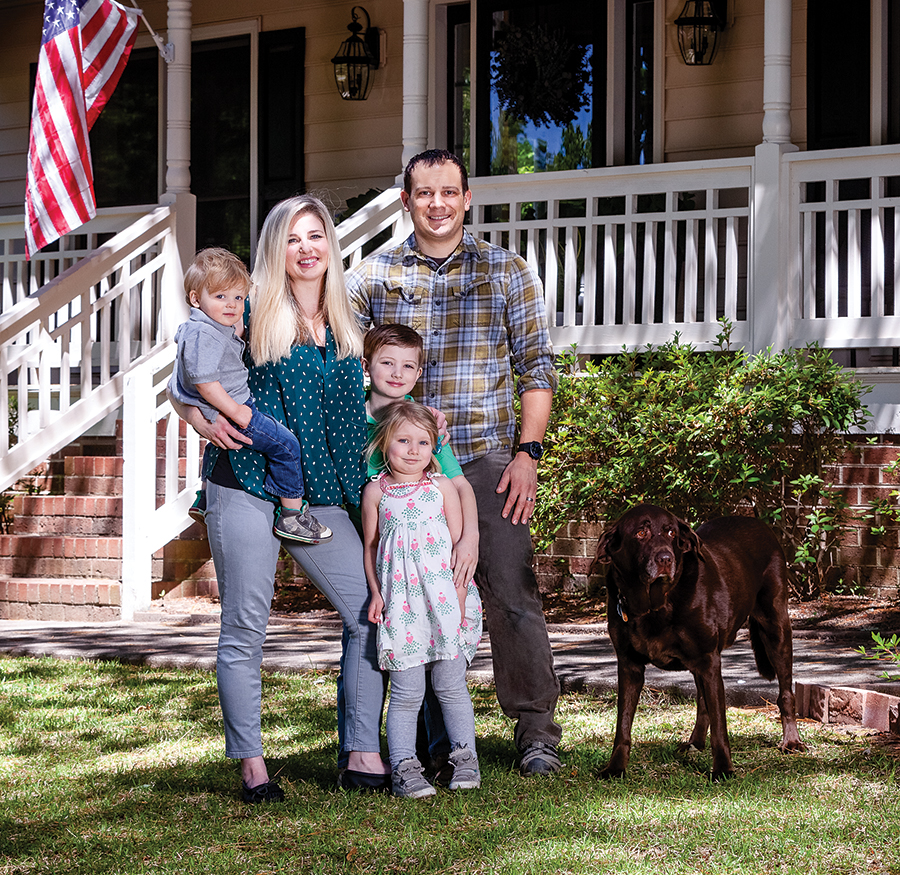 True, Monica Ruszkiewicz and her husband applied only cosmetic upgrades — no plumbing tasks — to the bathrooms. But their house in the Center South neighborhood of Southern Pines has four. They have three young children, which meant trading off a toddler for a paint brush. Since Ruszkiewicz was working from home as well as homeschooling, most upgrading was done evenings and weekends.

Identifying skills was important, early on. “He’s good with the muscle, I do the finishing work,” Ruszkiewicz says. Not that either has much experience. “We’d never done more than paint walls and install faucets.” 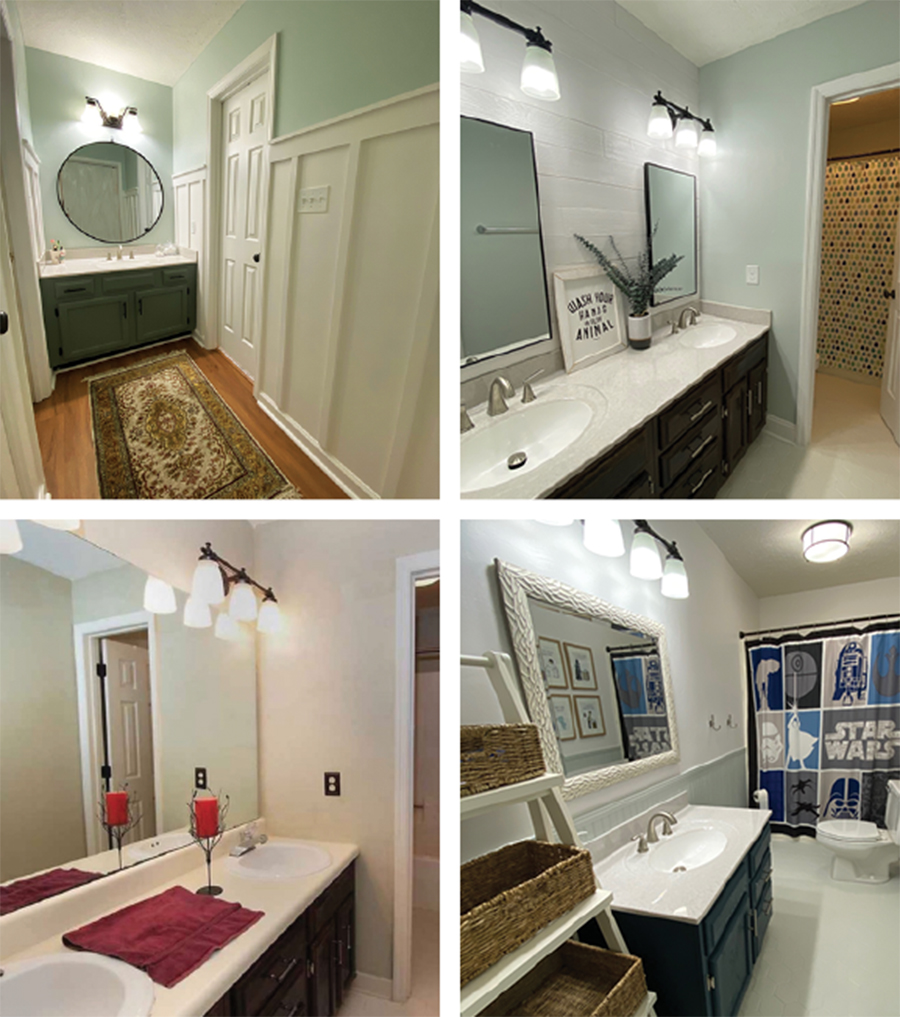 They decided to use the same palette in all four bathrooms, for continuity. Makes buying towels easier, too.

The project took about eight weeks to complete. Even before the stay-home order, this military couple had declared 2020 the Year of the Bathrooms. Now, with nowhere to go, “We hunkered down and got it done,” Ruszkiewicz says.

Lesson learned: “People are more skilled than they think. Just roll up your sleeves and get started.” 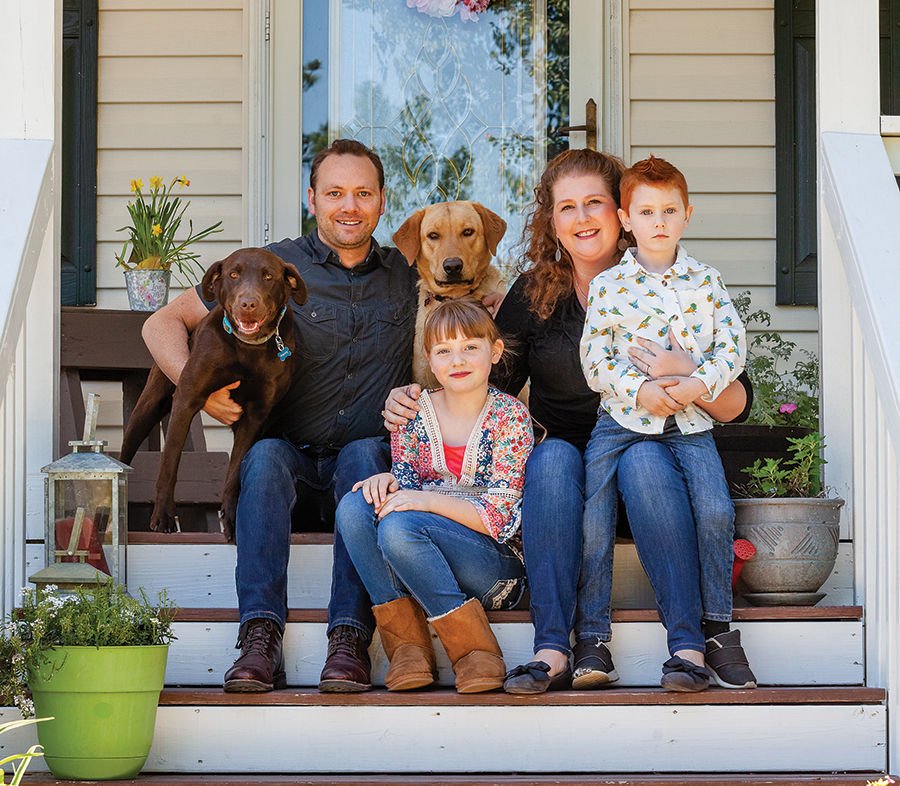 Call her Jo the Ripper.

The Whispering Pines house this military family found — with a big fenced yard for their two breeder Labs, another dog and two children — was OK except for grungy carpet on some floors, engineered hardwood on others. When they found out their stay would be several years they decided to replace the lot.

Joanna Wells opted to rip out the old. Some had been glued down so securely that removal left gaping holes in the subfloor. These had to be patched and sanded.

“You owe me big-time,” she told her husband. 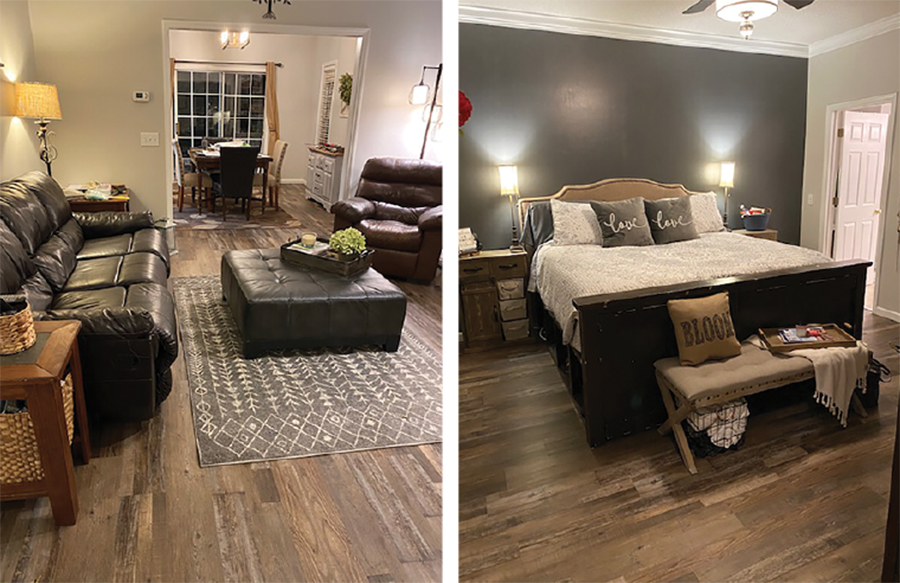 They took on the kitchen, dining room, living room and master bedroom while the Labs watched, puzzled, from the deck — for good reason. Penny is expecting puppies soon.

Hardwood was too expensive, so they chose vinyl lock-in plank in a walnut brown — a stunning backdrop to their leather upholstery and patterned rug.

Wells, who teaches at Sandhills Classical Christian School, was on furlough, since “you can’t do pre-school (from home).” Otherwise, the job might still be waiting.

Encouraged by the results, the couple plans to add a shower to the guest bathroom this summer. Before that, Penny and the pups need a whelping box. 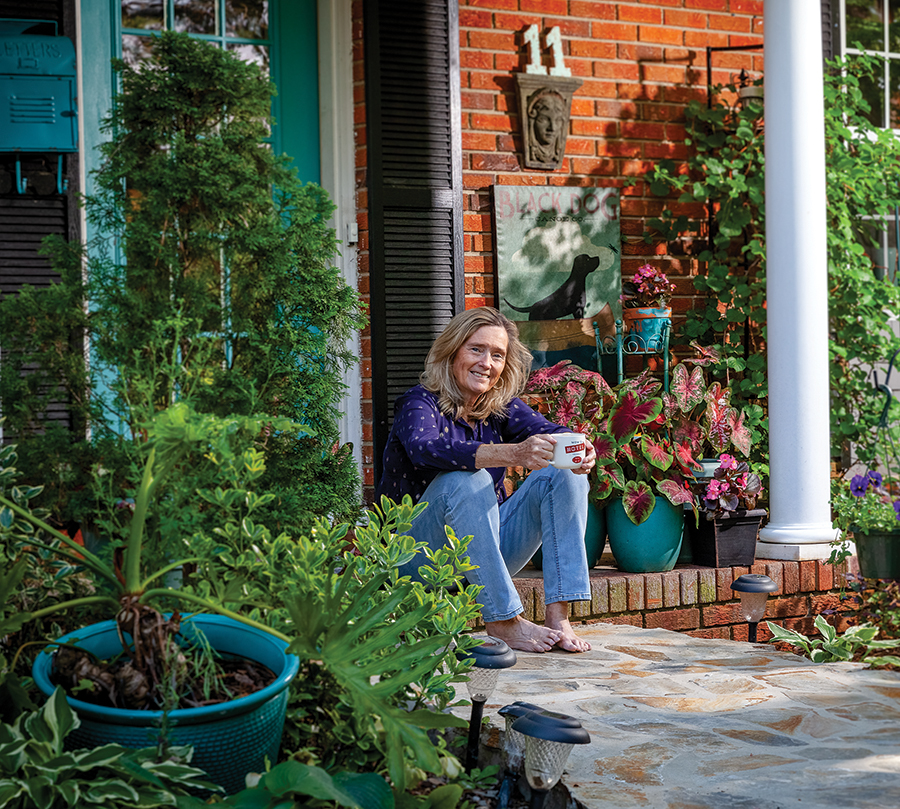 Everything Denise Baker touches turns to art. For years, she taught and inspired students at Sandhills Community College. Now retired — but not “retiring” — she viewed the spectacular weather during the quarantine as a reprieve from Mother Nature.

“In 42 years I’ve never seen such a beautiful spring,” she says.

So, while others were “going bonkers,” Baker, with helpers, got to work on her ranch house/studio in Whispering Pines, since “all this craziness kept me from focusing on art.” 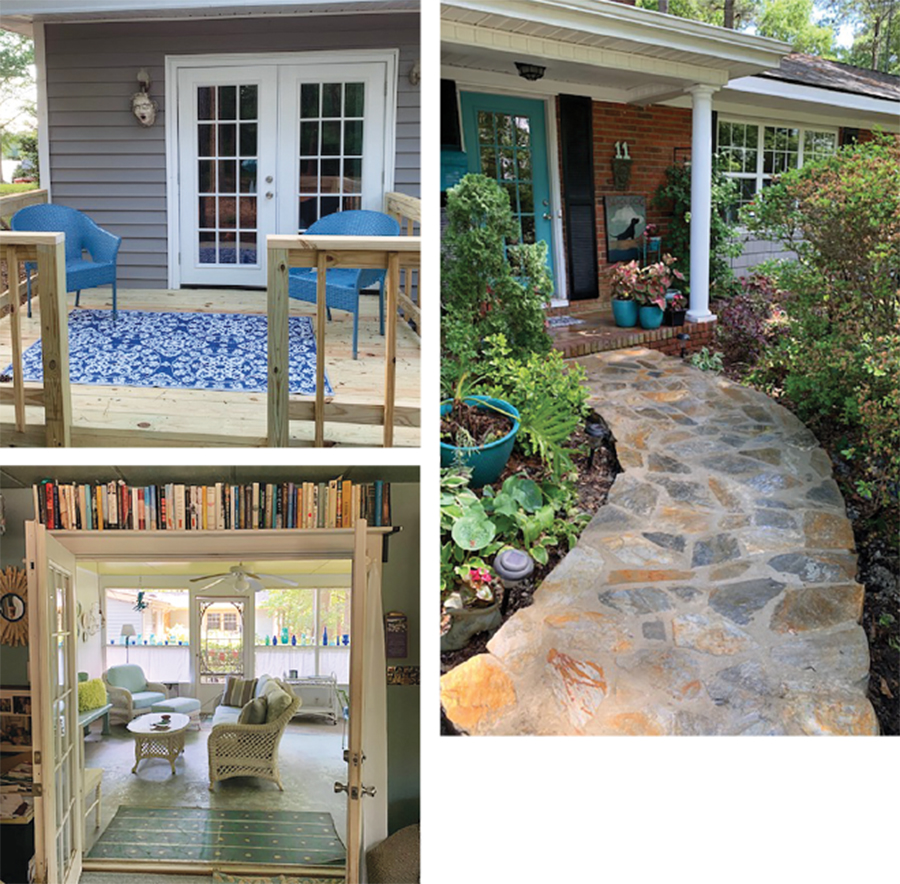 First, she replaced an ugly, cracked cement walkway with a stone mosaic of her design, more in keeping with the gracious front porch. Then, she added a simple deck accessed by French doors onto the side, where she placed deep royal blue all-weather wicker chairs and patterned rug. Baker had a bookshelf installed over interior French doors leading to a screened porch, and also recovered the cushions. Other door-topping shelves hold pottery.

All this, plus some clean-outs, in just a month. “My goal for the rest of the quarantine is to get the backyard in shape,” Baker says. That will happen after a short reprieve on Pawley’s Island, the perfect antidote to cabin fever, even when the cabin is as creative as Baker’s. 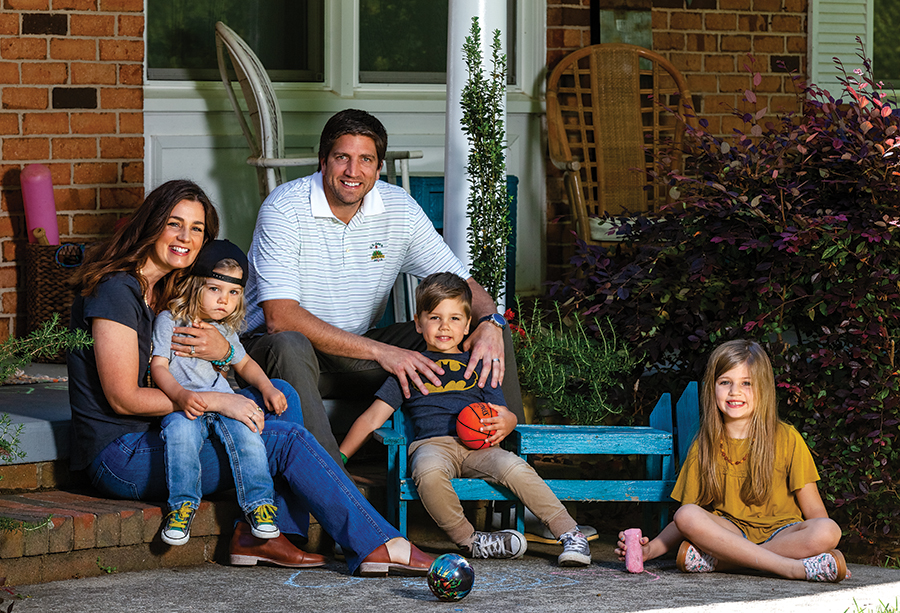 That noise you hear is Picasso applauding from his grave.

Lindsey Lindquist is an abstract artist with three kids under 6 and assorted livestock in their Weymouth/Southern Pines backyard. Children that age put sticky hands everywhere, including walls. Instead of following them around with a bottle of Fantastik, Lindquist decided to paint a mural on the half wall between the kitchen and the little ones’ craft corner.

The mural not only disguises fingerprints but showcases Mommy’s business — the most recent installation being the children’s glassed-off playroom at remodeled Pinehurst Toyota.

Lindquist calls creating the mural a “stress reliever” during the long days when, if not homebound, the kids would attend Moore Montessori Community School. Otherwise, call it bloomin’ gorgeous, if abstract is your cuppa green tea. Amazingly, she completed the mural in one afternoon, using paint left over from other projects. The kids “helped” paint reachable parts. 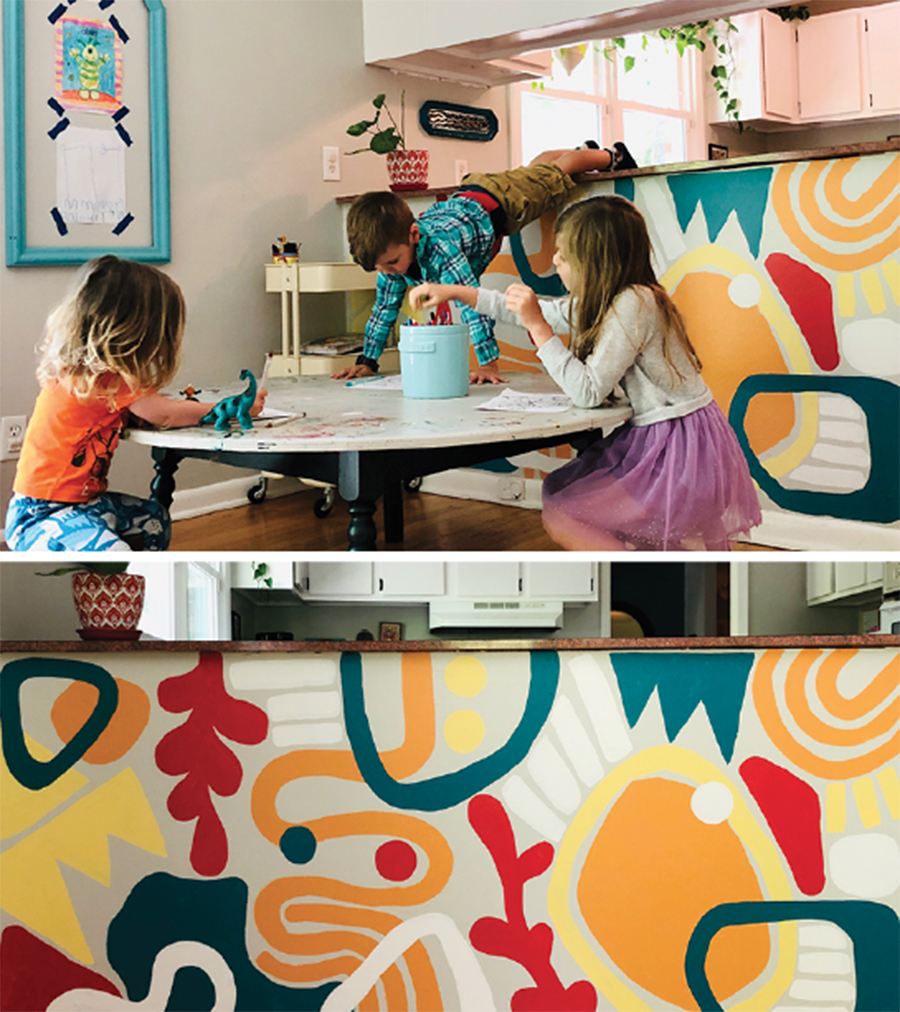 “I wanted to make a happy, creative spot,” she says. Also provided, a low craft table found at Habitat.

Lindquist, a Pinecrest graduate, studied painting at Arizona State University. Her ambition: illustrate children’s books. Elsewhere in the house she has channeled Fauvist Henri Matisse. “My husband is super-tolerant of how the house is decorated,” Lindquist admits.

Could Jackson Pollock be a mere splatter away? 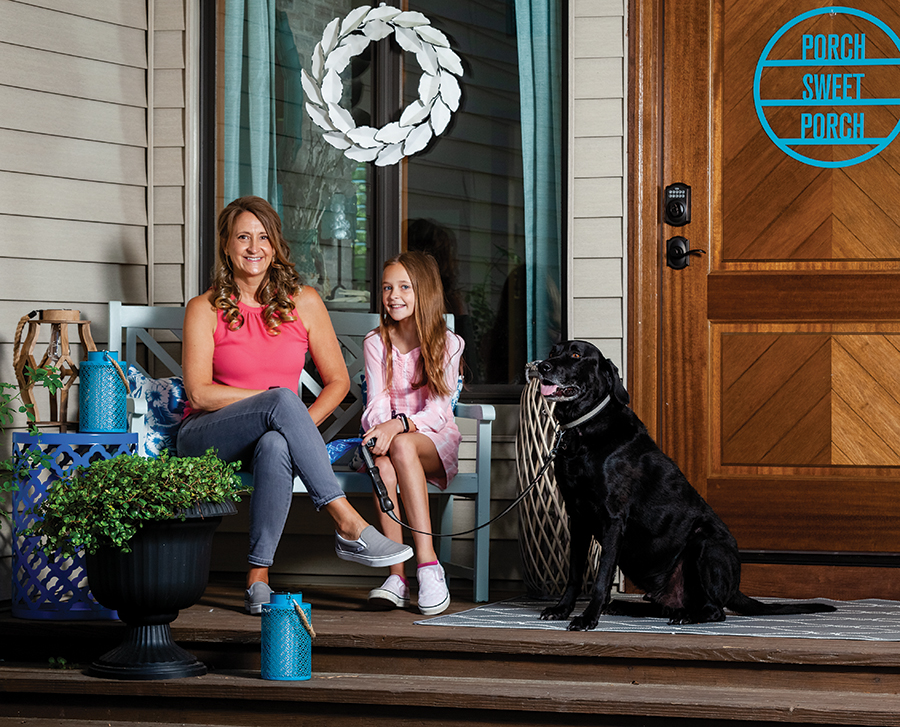 Hey, it worked for Tom Sawyer.

“When we moved in there was a garden bench that had been left rotting under a tree,” Trish Baldwin says of their Pinehurst home.

To save or not to save? Baldwin was busy with more important tasks. “Besides, I don’t like sanding.” Her 11-year-old daughter, Reece, seemed interested once the novelty of no school wore off.

“I showed her how to use the sander,” Mom says. Then they rustled up some blue paint to match the front door. 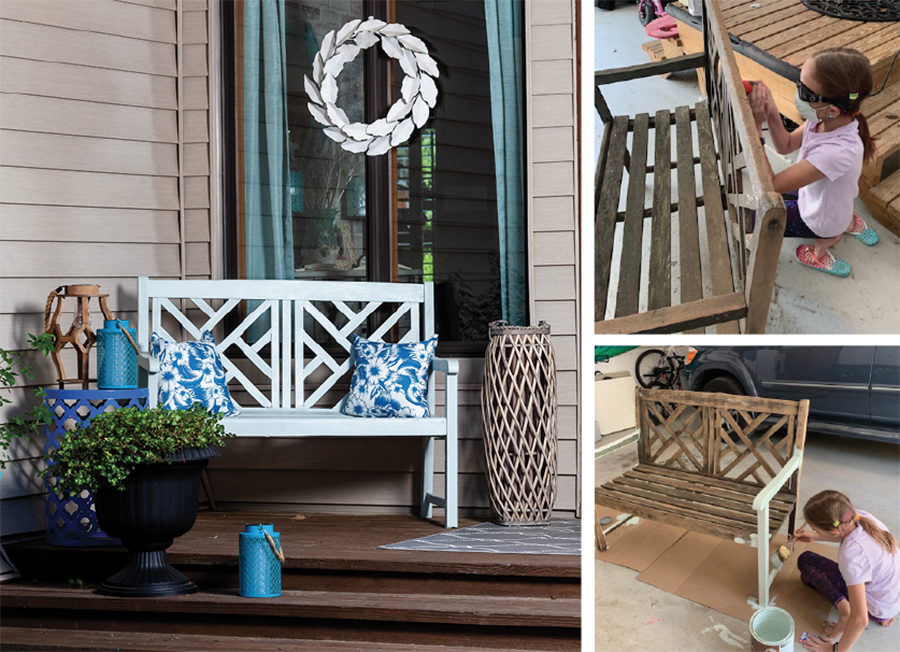 Painting slats is a tedious job — but the pre-teen has a variety of skills. She already sews, cooks from online recipes (cinnamon buns for Mother’s Day) and put together a craft table from hundreds of (Reese’s) pieces.

After sanding, the bench required two coats of paint. A sprayer would have been easier but Trish insisted on using materials at hand.

The result? Something the uppity Plow & Hearth catalog would unload for $300. Plus shipping. Some assembly required. 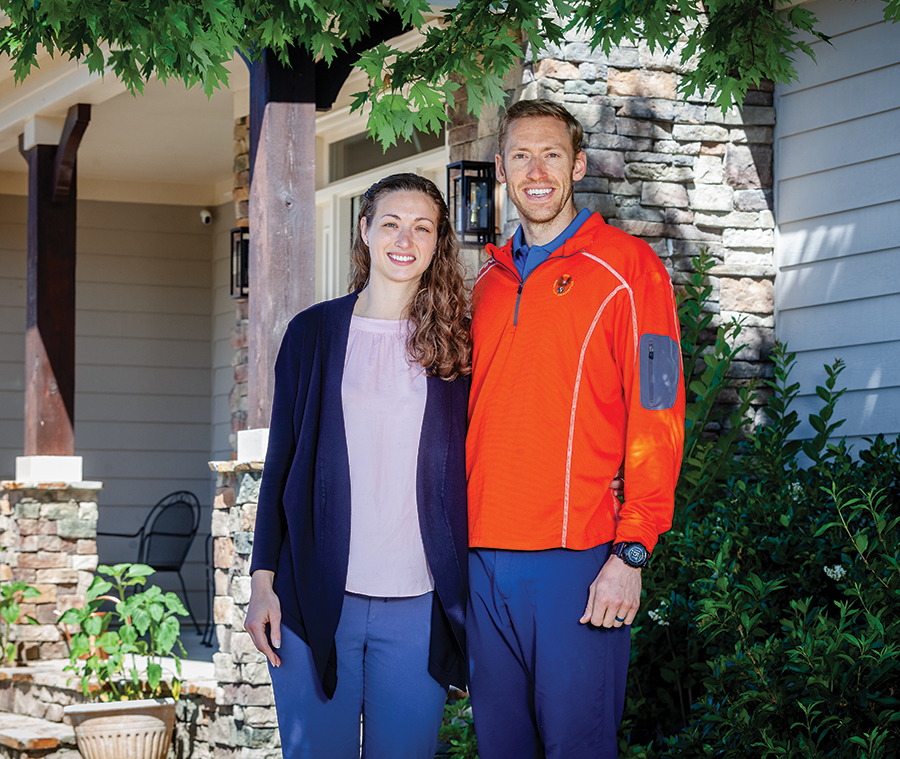 These raised beds are raising eyebrows. Surely, with wood-framed wire fence and gate they are the pride of a master landscaper.

Not exactly. Kelly Carty and her husband, Mark Saurer, are both civil engineers and, more importantly, enthusiastic researchers and planners. For their first home, in Whispering Pines, everything had to be spot-on.

“We found the best materials, how to position beds for the right amount of sunlight,” Carty says. “I’m the planner, he’s the executor.” His execution took only three days, in March.

Carty grew up on a farm, later traveled with the military, putting that all behind her for a recent degree in public policy from Duke. 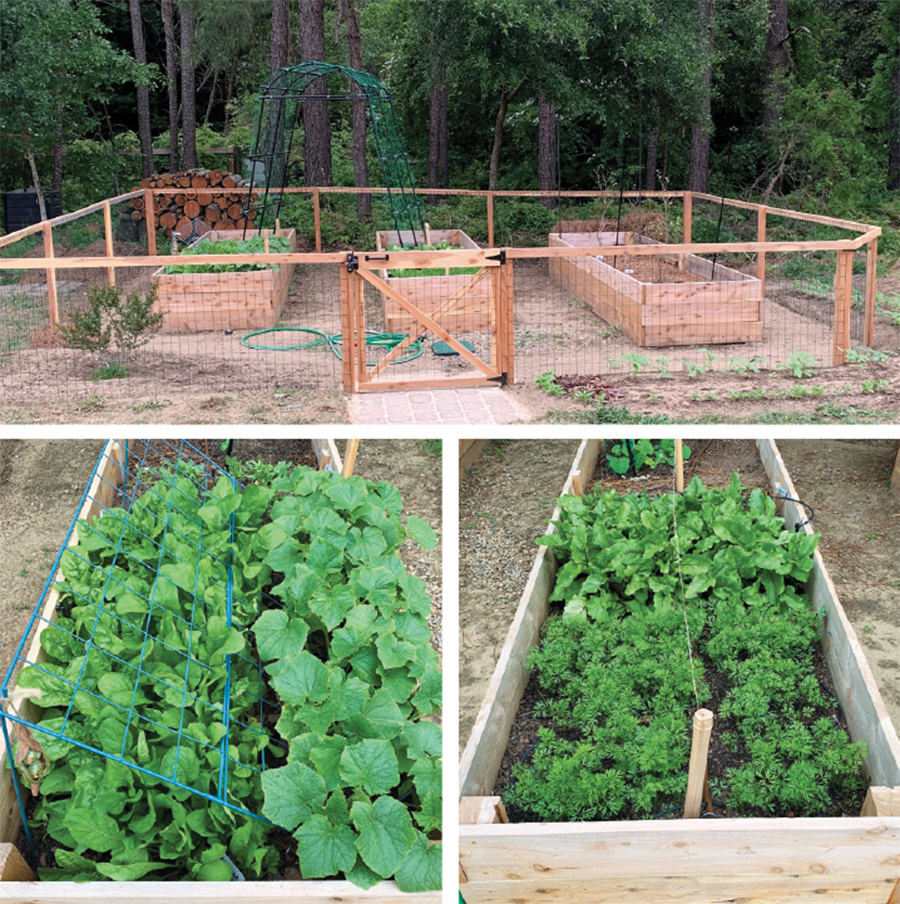 No technical detail was overlooked. They concocted a proper soil mixture before burying the first seed, which was nourished by homemade compost. When the seedlings appeared, they were covered by a special fabric.

Their first harvest — arugula, Swiss chard, parsley, dill, cukes — is in and will be followed by summer and fall plantings.

“We selected this project because we love to cook, we love fresh vegetables, and nothing beats harvesting them from your own backyard,” she says.

The deer may be stumped but a few aggressive rabbits agree.  PS