Curtain Up, Light the Lights

How The Nutcracker brought two families together

Show biz runs in families: the Barrymores, Redgraves, Fondas, von Trapps, Sutherlands, the Sinatras, the Douglases, Judy Garland/Liza Minnelli, Debbie Reynolds/Carrie Fisher. Dancing their way onto the local list: the Epsteins and the Mays, where parents and children have appeared in Gary Taylor Dance’s production of The Nutcracker practically forever — which is one way to avoid hiring a babysitter during rehearsal season.

As an aggregate, since 2008 they have performed almost every supporting role, since most dancers play more than one part. Casting memories bring shrieks of laughter, as when an onstage married couple is an off-stage father-daughter.

Auditions begin in June, rehearsals (mostly in High Point) in July, boot camp in August. Commit and commute are bywords for the Mays-Epstein gang. But, given their enthusiasm, so worth it.

In 40 years of ballet involvement, Rita Taylor has seen no equal. Parts were never assigned pursuant to a family member’s involvement: “Each one earned their spot because they do a great job.”

The two families met through ballet. “I was looking for a place to dance,” Caroline says. She was 5. Mom Katie found Rita and Gary Taylor. Rita’s enthusiasm impressed her. Coincidentally, Jules took ballet classes and, with her college minor in dance, did some teaching. She met Katie, not knowing they lived a mile apart in almost-twin houses built by the same builder. Friendship blossomed. Then, Rita needed parents to appear in the ballet’s party scene.

“We just had to do some ‘stately walking,’” Katie recalls. Fine with dad Brooks, who had theater experience in high school. “I’ve always enjoyed the arts,” he says. “I like putting on makeup and wigs.”

By age 7, Caroline was invited to join the ensemble. Eventually her brothers followed. Stagehand duties were assigned to Brooks Jr., who has autism.

“Remember when Brooks saved the Christmas tree?” which had been caught in the curtain, Katie says, provoking chatter and laughs. 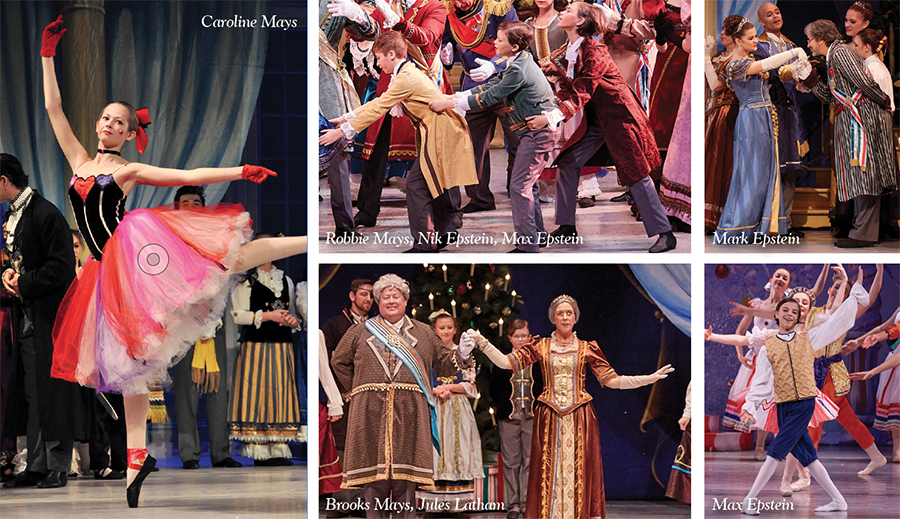 The Epstein boys found their calling a different way:

“I started as Max in The Nutcracker at 6,” Jules begins. “He played Fritz — a really big role for a really little boy.” (Fritz is Clara’s jealous younger brother, who breaks the nutcracker.) Where the girl participants had their mothers in the dressing room, Max faced navigating makeup and costume changes alone. Jules convinced daddy Mark to get involved by helping Max in the dressing room. Rita Taylor took one look and invited Mark onto the stage.

Four adults, five children, months of rehearsals, and almost a dozen performances between Thanksgiving and Christmas, including three at Sandhills Community College Nov. 29 – Dec. 1. The logistics — formidable, but not insurmountable.

Caroline: “I do speech and debate at Pinecrest. I pick and choose (other activities). It can be hard, but I make it work.” She was forced to sit out a year for knee surgery, but returned.

Robbie’s into soccer and views dancing as another sport. He was afraid a broken ankle might keep him from participating this year, but as of now, he will be onstage, in costume sharing the role of the Prince with Max.

“He’ll do everything the role requires except dance,” Katie explains.

No problem, since the expression “break a leg” originated backstage.

utcracker has become an integral part of both families.

“I’ve never experienced it without my parents being there,” Nik says. “It’s convenient.”

“We got roped in from the beginning,” Katie adds. “We never just dropped the kids off.”  Dancing, a vigorous exercise, builds energy and keeps the kids in shape. They do homework on the way to rehearsals in High Point. Dinner is often take-out except for the Epsteins, who are strict vegans, which means Jules prepares snacks and meals-to-go.

The Mayses don’t mind missing a traditional Thanksgiving. Performance schedule precludes visiting family, which means family comes here. “Our cousins look forward to it,” Caroline says. Visitors attend a performance, then everybody goes out for dinner.

Experience breeds confidence. Off-season, the Epstein and Mays siblings participate in school productions, from classics like Cinderella and Mary Poppins to a less-gritty version of Rent. Robbie has joined Max’s dance club. Caroline is looking for a college with a strong dance program, not as a career, but an activity that has been part of her life since little girlhood. Katie and Jules speak every day. The Mays kids swim in the Epsteins’ pool. The families even take a “beach week” together in the summer.

“We’ve become really close,” Caroline says. As for the dance part, “It’s a welcoming environment. (Looking back) I laugh about the blisters and pain of point shoes.”

Nik, the youngest, remembers the “friends and jokes and stuff,” calling the experience “an amazing journey.” Max labels the group “a big, slightly dysfunctional family.” All because of The Nutcracker, which this year will add a sensory-friendly performance with toned-down music and action for adults, children and families with special needs, such as autism.

The idea was born, in part, because of Brooks Jr.’s participation.

Rita Taylor sees dance as a discipline. “Students who train in the arts translate this into the courtroom, the boardroom, the operating room. They are building both physical and mental stamina.”

“You know how we measure kids’ (growth) by lines on the wall? This is a way to measure kids artistically, a yardstick to measure their growth as performers and people. I see already how they take care of the smaller kids.”

Mark adds: “It’s a very professional production . . . nice to be part of it in our community.”

Is there a less-hectic life for the Epsteins and Mayses after The Nutcracker?

“Yes,” Brooks senior chimes in emphatically. “The kids put so much time and effort into it. For nine years, Nutcracker has been part of our lifestyle, like when it’s fall, it’s Nutcracker season.”

Katie adds: “We’re fortunate to do something together. Otherwise, (the children) would have gone in different directions. This put us all in the same space doing something they enjoy.”

Also something that contributes to the enjoyment of others.

These days, few stories have happy endings. Breathe easy. Clara gets her nutcracker back. Tchaikovsky’s dreamy music gets its seasonal airing. And, once again, two families revel in the smell of grease paint, the roar of the crowd. PS