A Piece of Work

Fox Hollow — like a posh resort in the country 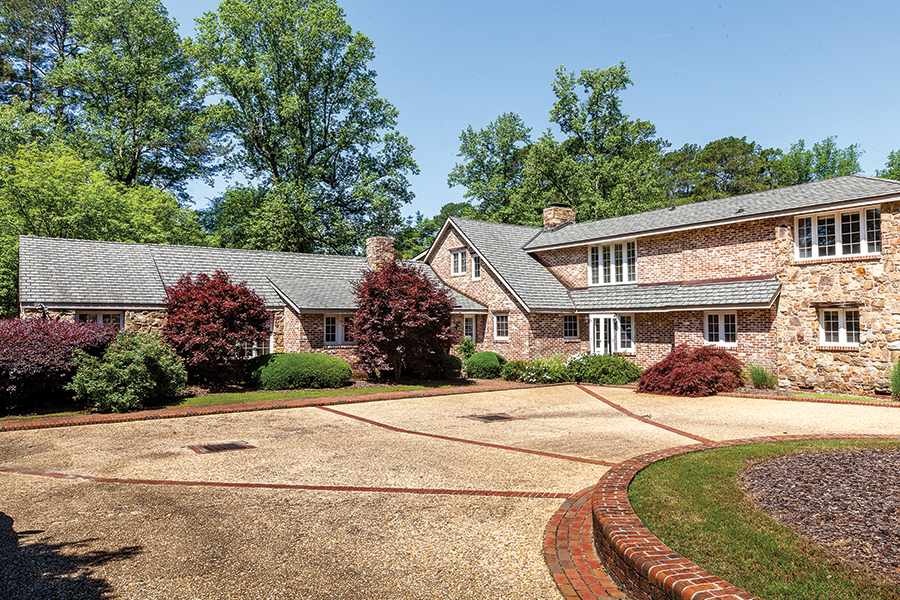 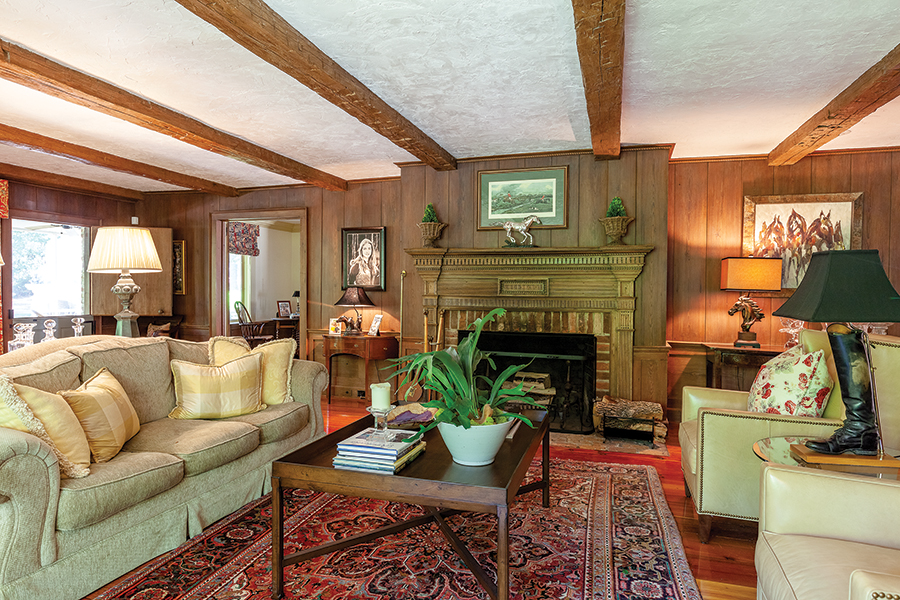 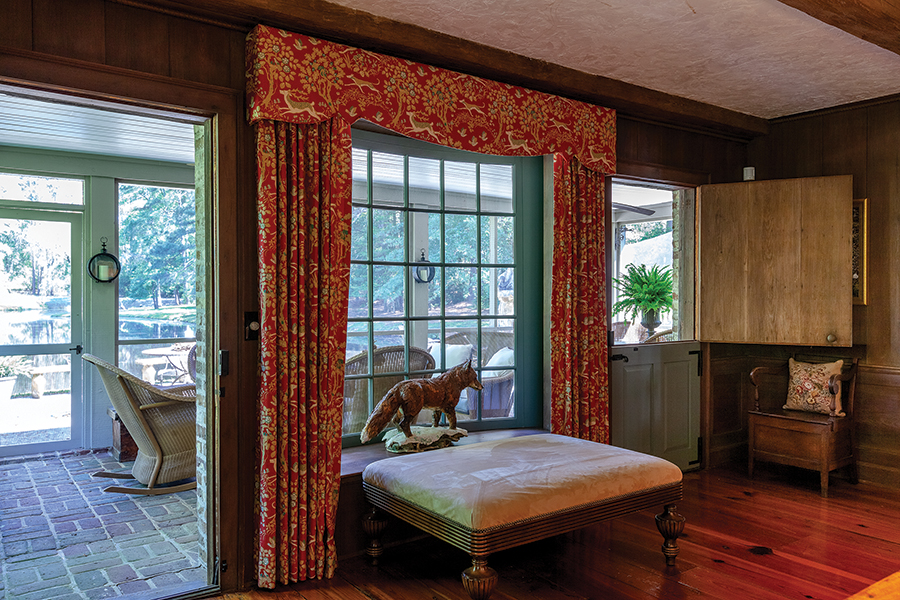 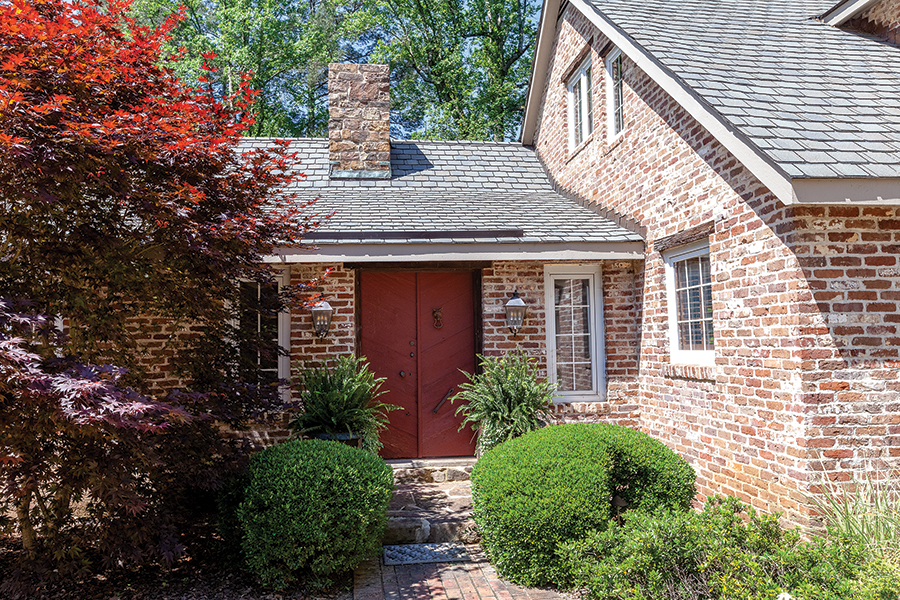 Through the brick posts and iron gates, down the long and winding drive, past the pond stocked with large-mouth bass, the waterfall, pasture, putting green, guest house into the courtyard where a white Italian sports car stands in front of a house with enough wings to take flight, formed from ancient bricks and stones — Fox Hollow Farm answers best to a single word:

“Living here is like living at a resort,” says Mike Martone, who lives at Fox Hollow when not in residence at alternate homes in Banner Elk, North Carolina, and Naples, Florida.

Likely a golf resort, given the hundreds of golf awards, crystal trophies and memorabilia on display throughout the house. Equally an equestrian retreat filled with hunting art, medals and statuary.

“Horses and golf, that’s what attracted us,” Martone says of the estate he purchased deep in Southern Pines horse country, in 2002. He recalls his daughter as a little girl, coaxing her pony into the shallow pond.

However, the house at Fox Hollow wasn’t always resort-quality.

This tract originated as a gristmill, one of only two in southeastern Moore County, operated by a Mr. Buchan. A drawing archived at the Moore County Historical Association shows Buchan’s home made of pine boards, while a map dates it from the 1780s. Still standing is the stone well house; Martone found matching stones in Virginia to face renovations to a wing, also the garage with adjoining workout room. For a project undertaken by a previous owner, weathered bricks were imported from Italy.

As a whole, the house exudes the aura of sporting gentry, despite the rough-hewn front door thought to be from the original cabin. 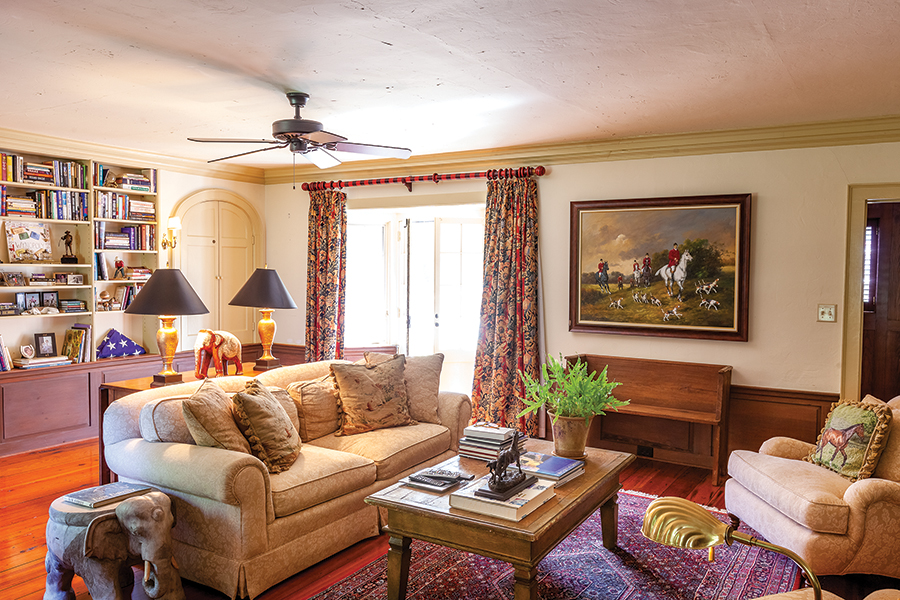 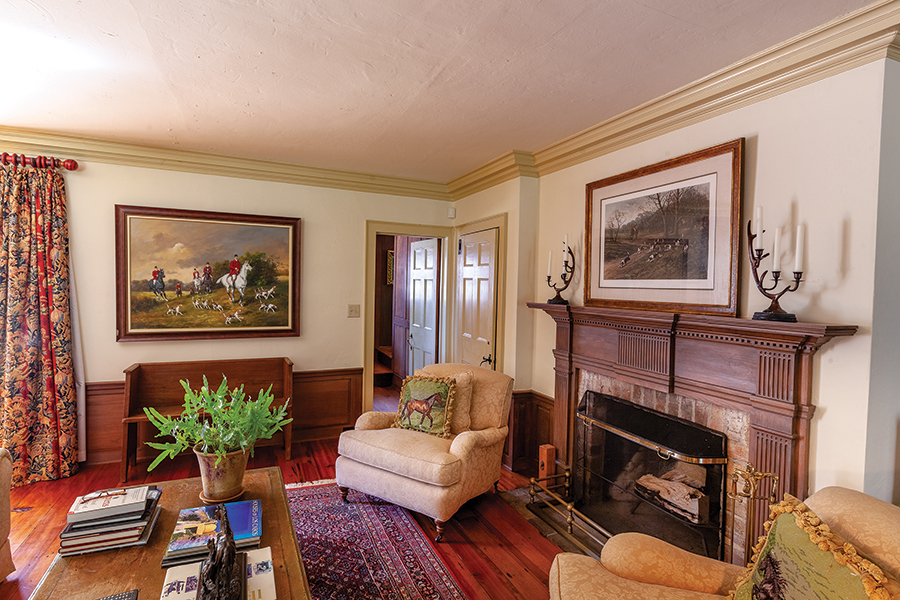 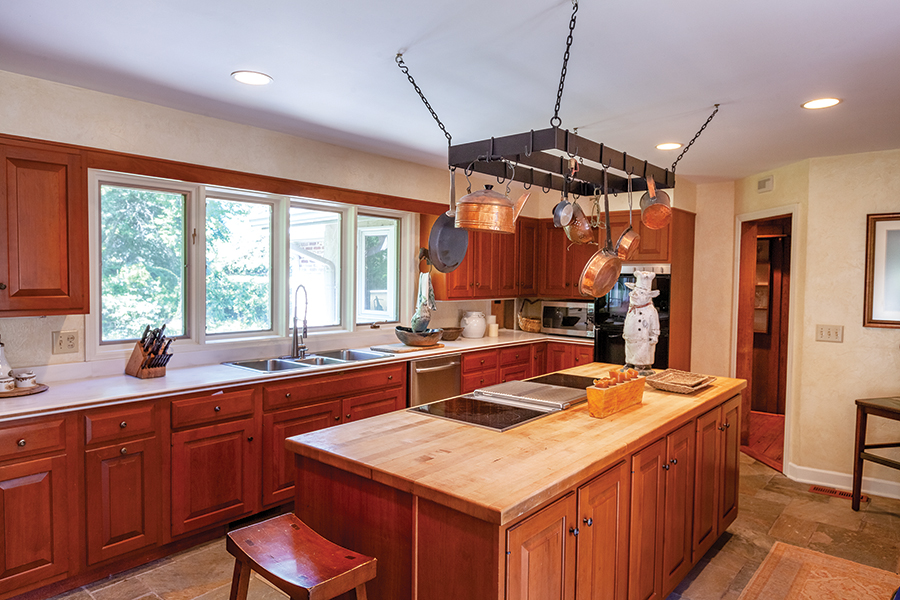 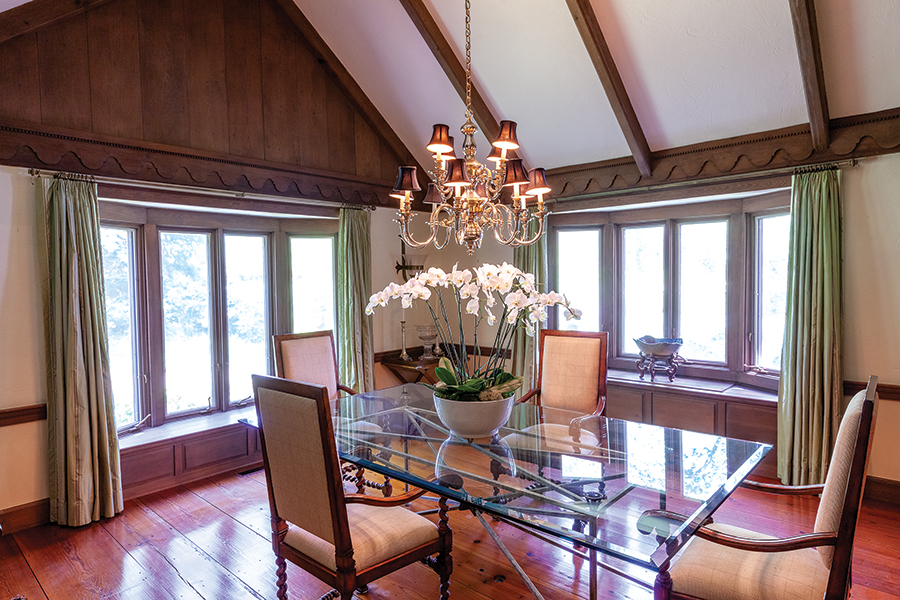 In the early 20th century Southern Pines developed as a winter haven for wealthy Northern equestrians. “Horse country,” between Young’s Road and Connecticut Avenue, gained panache when the Firestone tire family built an estate on Old Mail Road, as mentioned in the 1994 New York Times obituary for Raymond Firestone, son of founder Harvey. Fox Hollow, originally 35 acres, now about 10, changed hands, submitting to several adaptations before Sam Morton — son of Master of the Hounds Tom Morton — grew up there, from 1961 to 1983. “Before the Firestones it was just woods,” Morton says. “There used to be a tennis court with grandstands” in addition to the spring-fed swimming pool and copper gutters, worth a fortune, that young Sam Morton once cleaned. Mostly, the house was party central for his brother’s college classmates, a departure from the “pink” hunting coats and high leather boots scene. “The whole fraternity came down from N.C. State . . . they slept on the floors, everywhere. There were bodies all over the carriage house.”

Watch out for the snakes — everywhere. “I remember a water moccasin that swam across the pool and up the rocks on the waterfall,” Morton says. He also recalls the queen of Thailand, visiting a college classmate who lived in Pinehurst, came to lunch, but Morton’s mother banished her unruly son, so they never met.

And those are just Sam’s tamer stories.

“I was an outlaw in those days,” he says, fondly. “We put a lot of energy into that house.” 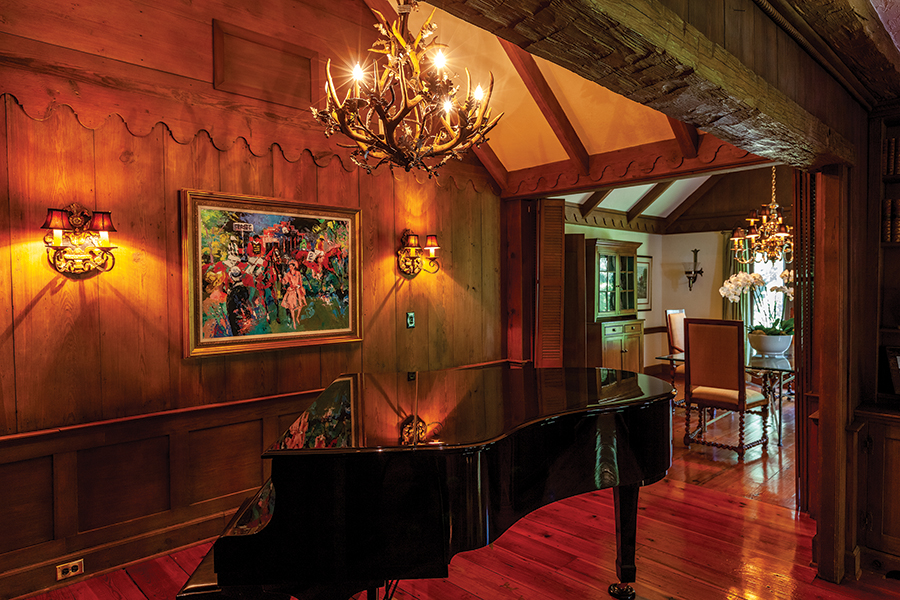 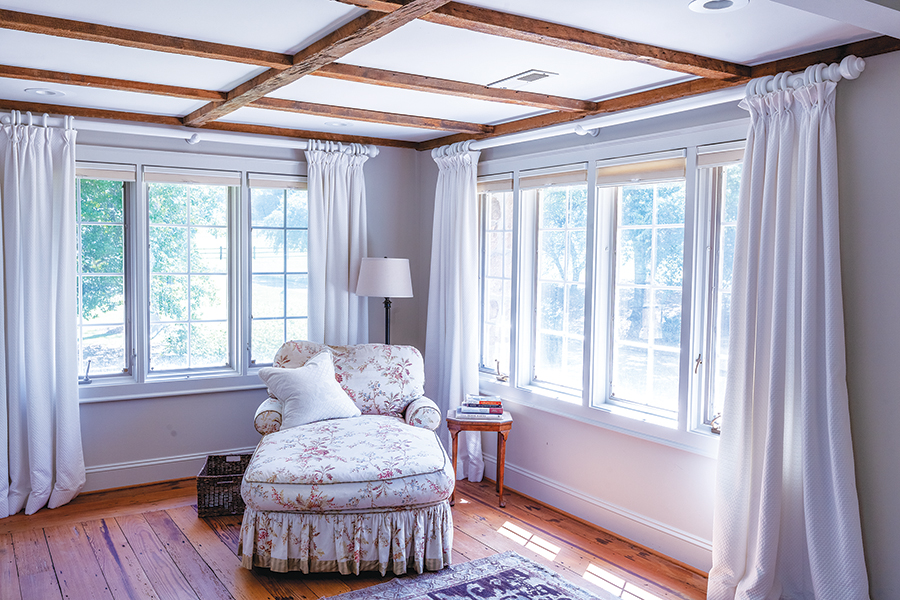 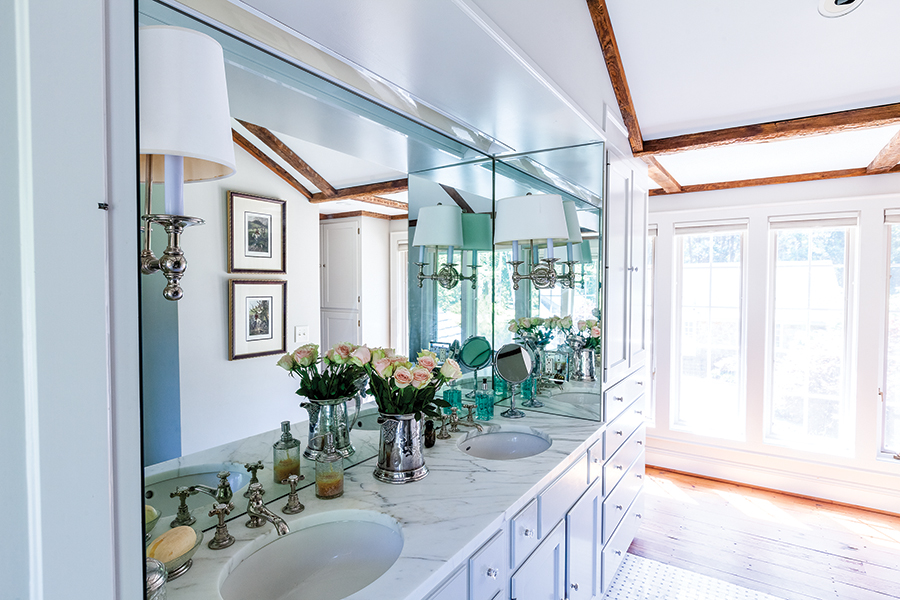 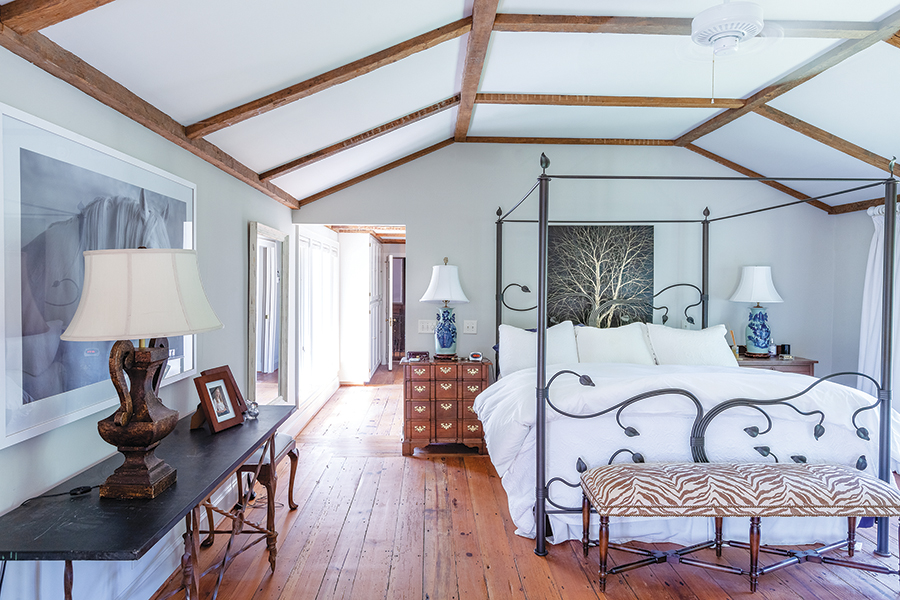 The Martone iteration is calmer, richer, more dignified. The house juts out in half a dozen directions, creating several living/sitting/TV rooms, a large but simple kitchen with breakfast room, medium-sized dining room, many bay windows with upholstered seats for enjoying the views. Some floors are an imported wormy chestnut instead of native heart pine. One bedroom overlooks the waterfall composed of descending stone steps, guaranteeing a babbling lullaby.

A baby grand piano fits perfectly into a nook in the central living room.

“My wife had a dream that our daughter would be a concert pianist,” Martone says. The dream fizzled but the piano still graces the space. Instead of music awards, her room was plastered with blue ribbons from equestrian events.

The master bedroom stands as one of several exceptions, with a fanciful wrought iron bed, white linens and narrow beams accentuating a raised ceiling. Light streams through window walls surrounding its seating area dominated by a frilly double-wide chaise longue. Instead of polished cherry or mahogany, the dining room tabletop is inch-thick plate glass with beveled edge, suggesting Art Deco, but crystal chandeliers channel The Phantom of the Opera. 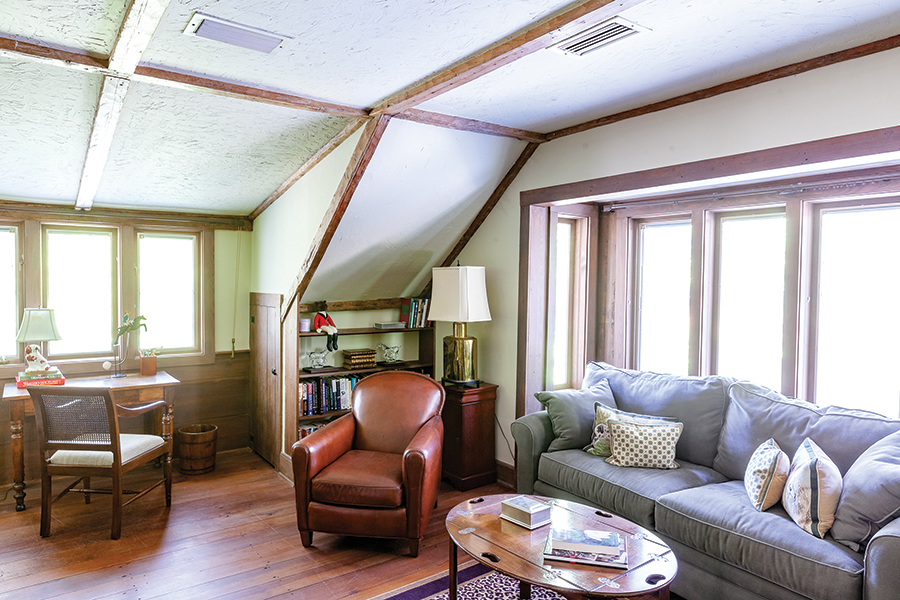 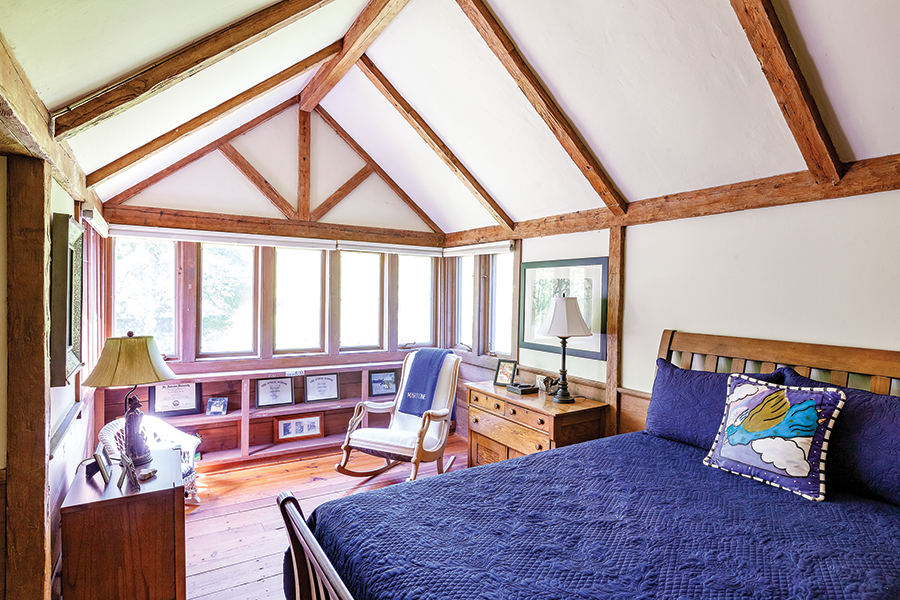 Formal and traditional, yes, but Martone demands comfort and livability

“I was one of six kids; we grew up in a modest house in Rochester, New York. I converted a small laundry room into a bedroom, or else I’d have to share with my brother.” Martone insisted on heated floors and towel bars in the remodeled bathrooms. “I wanted everything in the house to be used, to be enjoyed.” That includes upholstered pieces unlike his grandmother’s house, where “the furniture was covered with plastic. You’d stick on it when you sat down.”

Every morning, after working out in his fitness studio, Martone sits on his screened porch overlooking the pond and terrace with massive stone fireplace, drinking coffee, watching blue heron fish for their breakfast, enjoying the camellias and azaleas he planted.

More than a home, like a fine suit, Fox Hollow Farm is tailored to the pleasure of its inhabitant.

“You can’t live here without thinking what a special house and environment this is,” Martone concludes, then adds, “Even better than some resorts.”