The Twelve Days of Delights

Dec. 25 marks the first day of the Christmas season, not the last. In Christian theology, the 12 days of Christmas begin with the birth of Christ and end with the Epiphany, the coming of the Magi, on Jan. 6. Thanks to the time span, “The Twelve Days of Christmas” came to be the earworm millions of radio listeners subconsciously hum from November till year’s end with the predictable vocal breakthrough at “five golden rings.”

Printed in 1780, the children’s book Mirth without Mischief features the earliest known version of the playful lover’s ode. Of course, the carol’s origins are less than clear, but most historians agree that the song was originally a memory-and-forfeit game. Singers who forgot lyrics paid their playmates with a forfeit like a kiss on the cheek. Only competitive kids, Jeopardy! champions, or carolers with serious sets of lungs typically finish the song, so we asked 12 local confectioners to interpret the verses in a visual cheat sheet of holiday desserts. 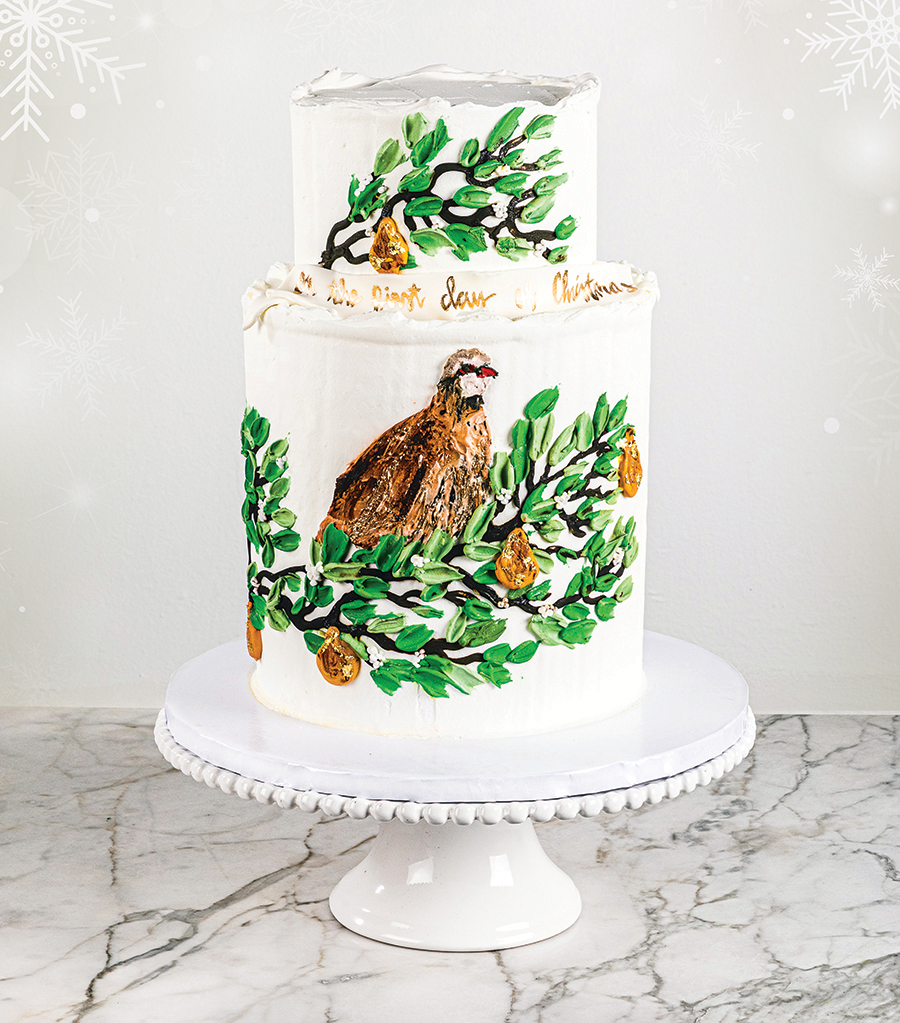 A Partridge in a Pear Tree

Kayla Lowery found an image of a lyric sheet while searching the internet for partridge-in-a-pear-tree inspiration and knew that she wanted to scrawl the carol’s opening line, “On the first day of Christmas,” on her cake to introduce the song. She daubed the fowl and foliage with a palette knife and paintbrush to achieve a vintage design that matches the tenor of the 18th century song. “I’m more of a buttercream hands-on kind of person than I am a fondant person,” she says, referring to her painterly technique. Lowery, 22, started her baking business when she was just 14 and will open her first storefront in January in downtown Raeford. 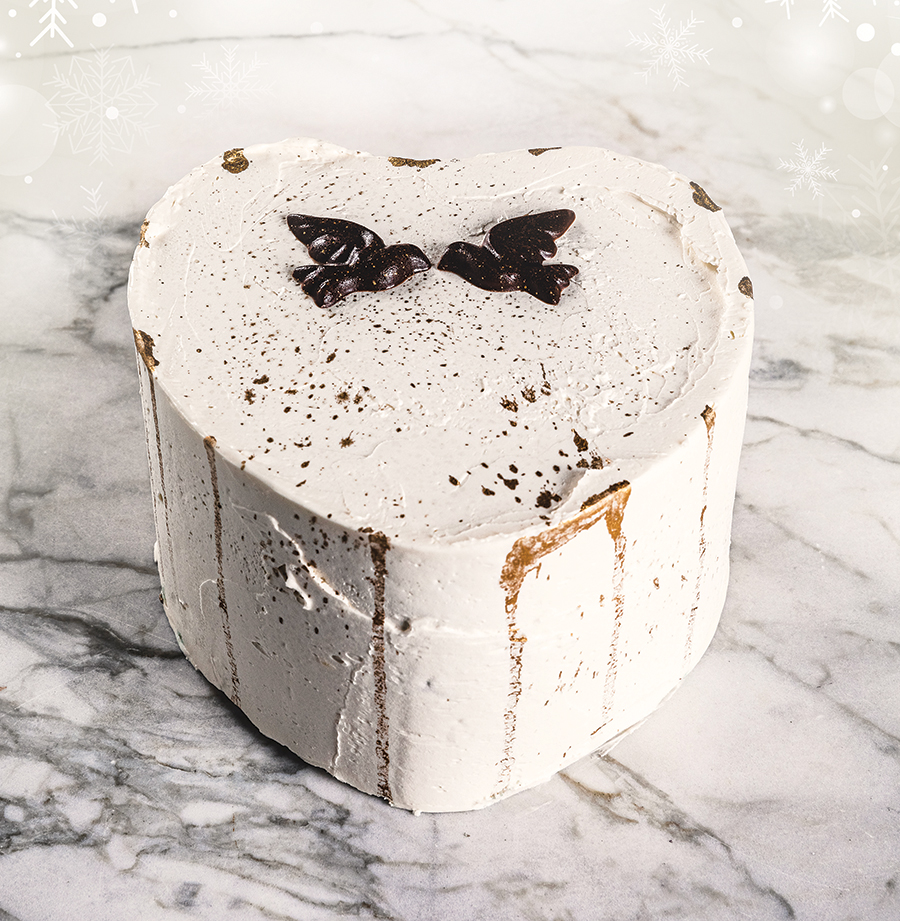 “I am always inspired by vintage cakes,” says Alison Reed, whose mother in-law, Debbie Reed, taught her how to bake, passing along vintage piping techniques in the process. “I knew I wanted to do a heart, keep it clean and simple and white,” she says of her dessert. Reed made a chocolate cake with cream cheese filling, gracing it with two chocolate turtle doves. Doves mate for life, so the heart shape is fitting. Reed prefers to work in muted tones that support the vintage modus operandi of her home-based bakery, Grace Filled Baker. 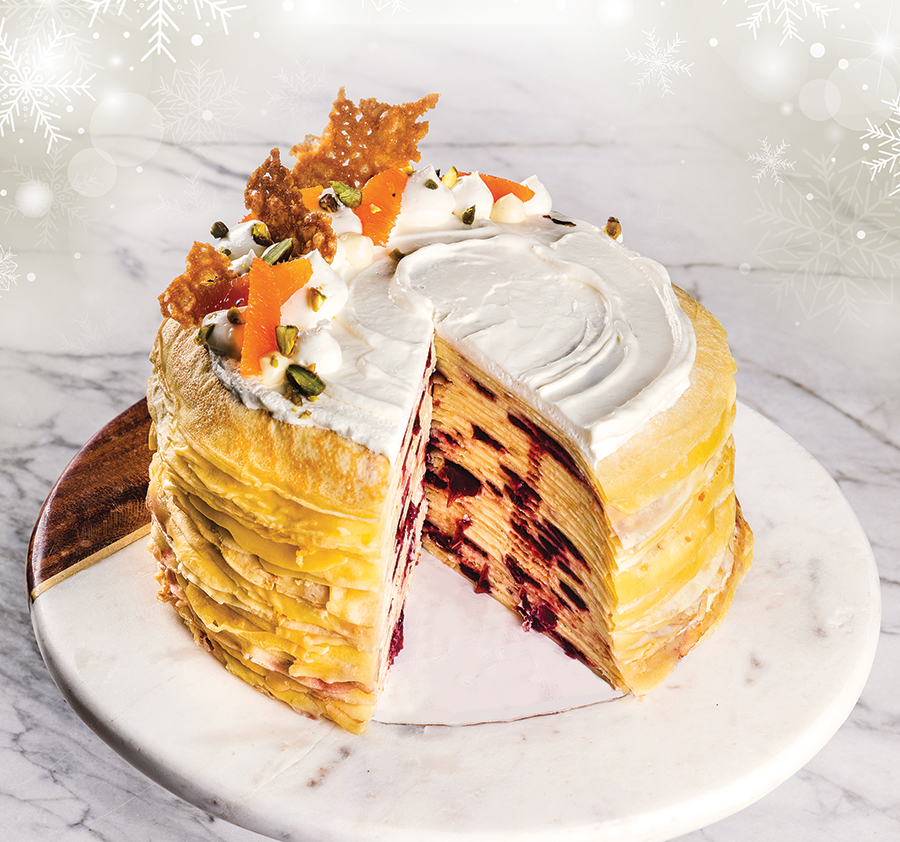 By Sal’s of Southern Pines

Sarah Gunderson, an experienced chef who runs her own catering and cake business, meticulously deconstructed “three French hens” into a crêpe cake layered with a pomegranate compote and diplomat cream, a pastry cream folded with whipped cream. She garnished her cake with pistachios and honeyed orange peel. The crêpes are French. The pastry cream is made with eggs, representing the hens. The “three” represent faith, love and hope. “I did honey for hope because I hope for a sweeter tomorrow; pomegranate for love; and then crêpe again, for the unleavened bread, for faith,” Gunderson says. 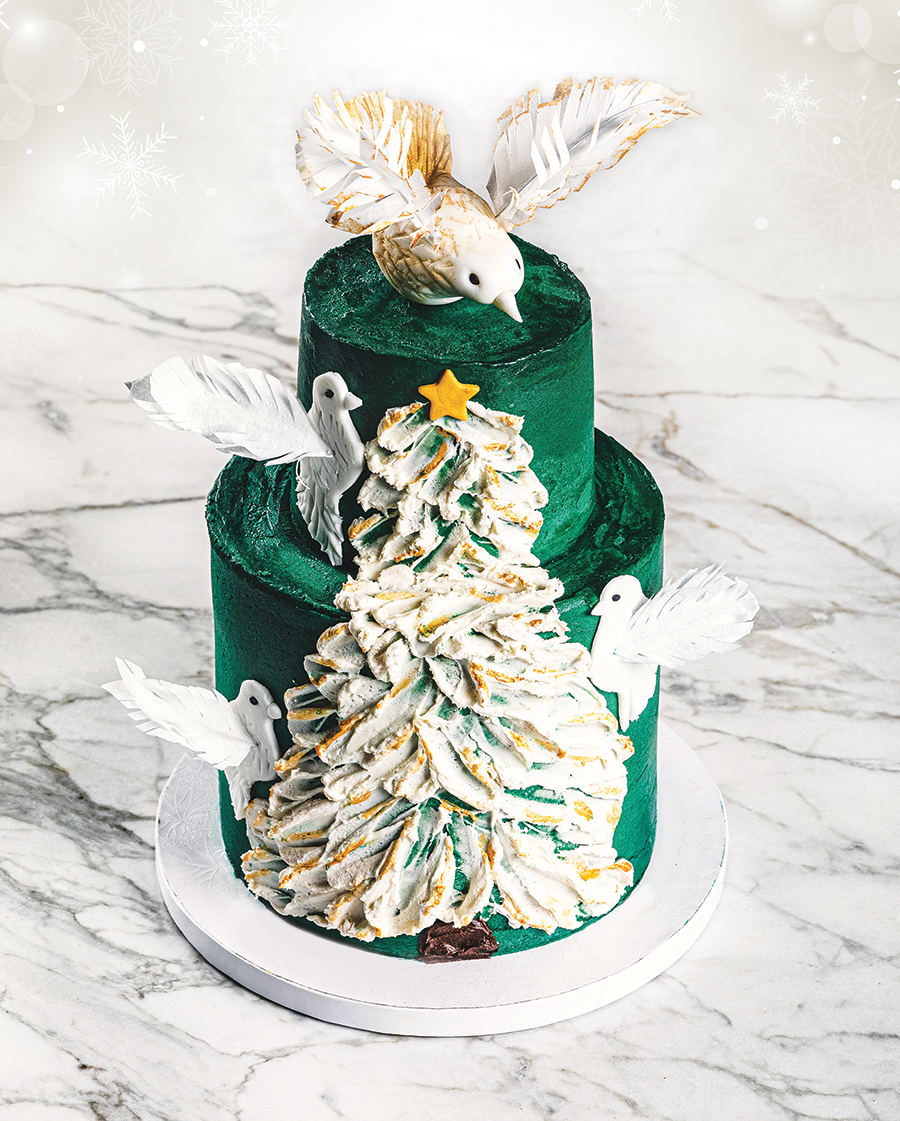 By Cakes in the Pines

Kristen Donovan has been baking since her 13-year-old daughter was 3 and has been running her one-woman show, Cakes in the Pines, for two years. “I wanted to make it bright, happy — a Christmasy feel,” Donovan says. “Especially since these past two years have been a little dark.” So, instead of blackbirds, she opted for an evergreen-colored, vanilla bean buttercream overlayed with a snow-covered Christmas tree and a trio of white birds. The fourth calling bird, made of fondant and sugar paste with wafer paper wings, alights on the top tier, which is a marble cake. The bottom tier is vanilla. 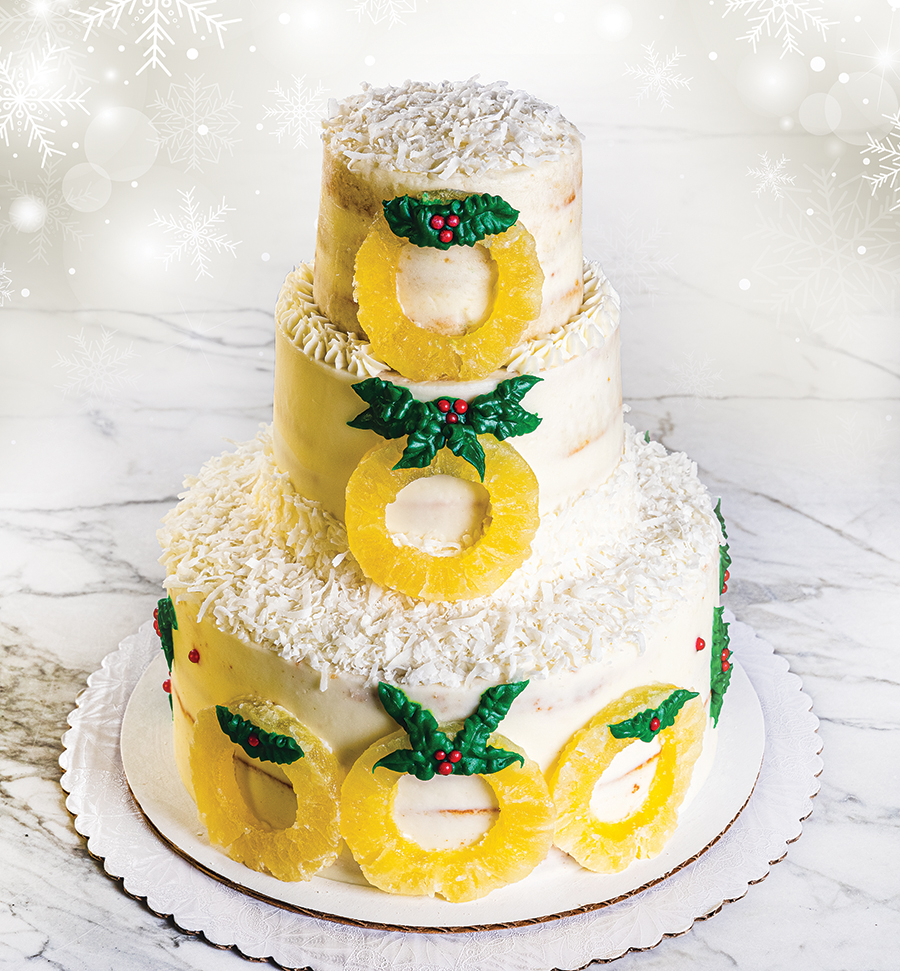 Mary Hannah Ellis has some serious local baking credentials, but she’s a hobby baker and wants to keep it that way. “Baking should always be enjoyable; the kitchen is where I go to escape from work,” she says. She escapes to the tropics for the fifth day of Christmas. “I love Christmas, but I’m not a fan of winter,” Ellis says. “Summer is my favorite season.” So, of course, her interpretation has a piña colada spin. The “five golden rings” of paradise is a three-tiered cake made of pineapple layers with coconut-pineapple filling and coconut cream cheese buttercream, and it’s decorated with pineapple rings and piped sprigs of holly. 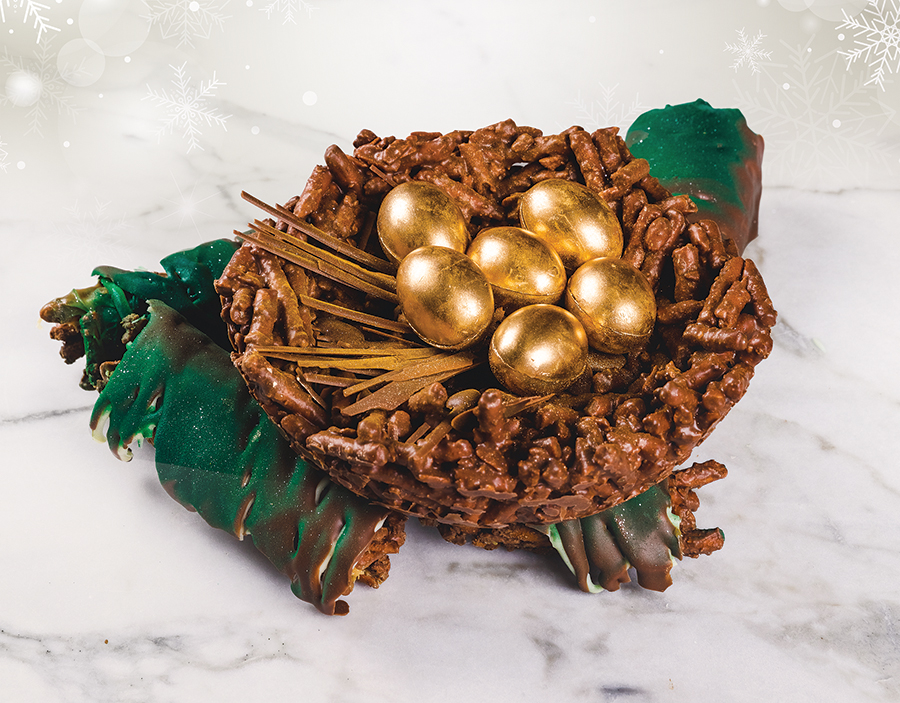 “When I thought of six geese a-laying, I immediately thought of golden goose eggs,” says Scott Hasemeier, Pinehurst’s resident chocolatier, who specializes in hand-painted bon bons. In a three-day process, Hasemeier made thin-shelled white chocolate eggs, filled them with a caramel “yolk,” and then tossed the eggs in golden luster dust before cozying them into a nest of chocolate-covered pretzels. “I rolled the pretzels into a small branch, and then I covered that with some chocolate bark and sprayed it with some green cocoa butter to make it look mossy,” he says. 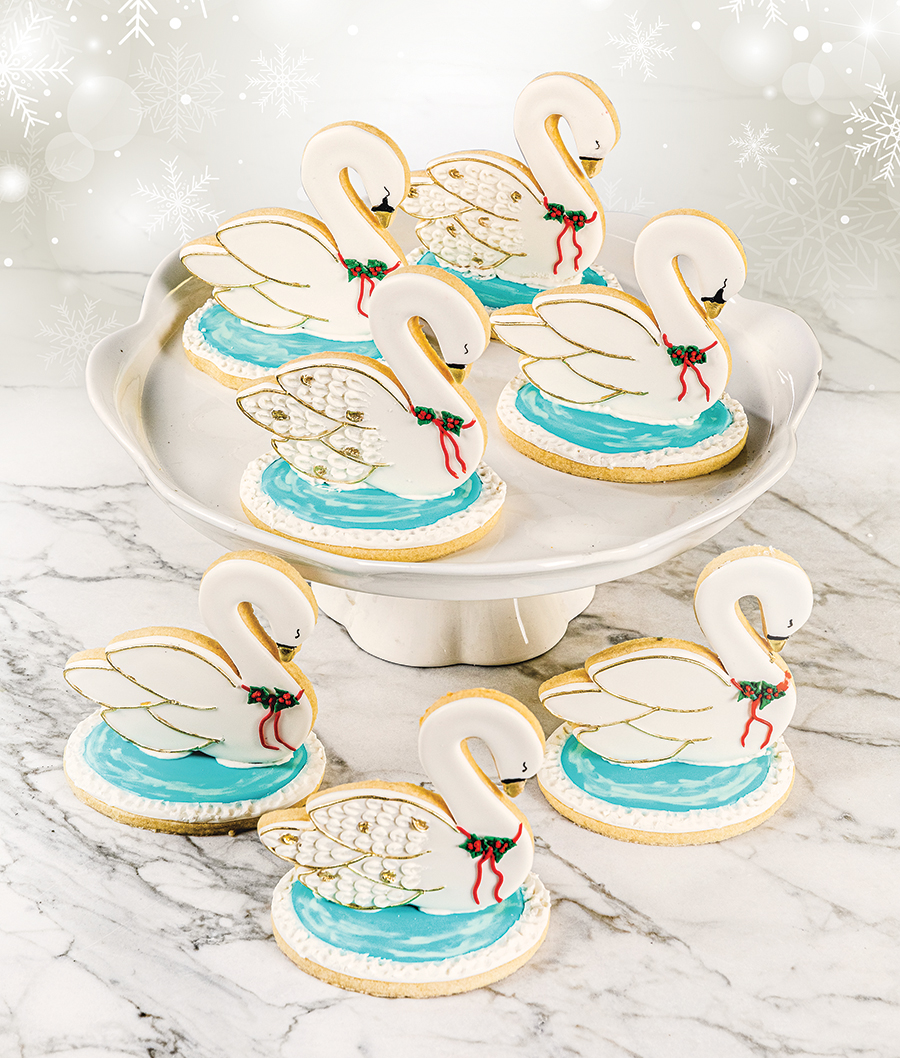 When Jessica Wirth and her family were stationed in England, she and her British neighbor would take their kids to feed a few of England’s swans, all technically owned by the queen — though her majesty exercises that option only in the waters nearest Windsor castle. After mastering the art of decorating cookies with royal icing, Wirth now runs her own home-based, cookie-making bakery, Cookies by Jay. She even owns a 3D printer to make her “seven swans a-swimming” cookie cutters. The cookies are her signature almond vanilla-flavored
sugar cookies with a soft-bite vanilla royal icing and hand-painted details. 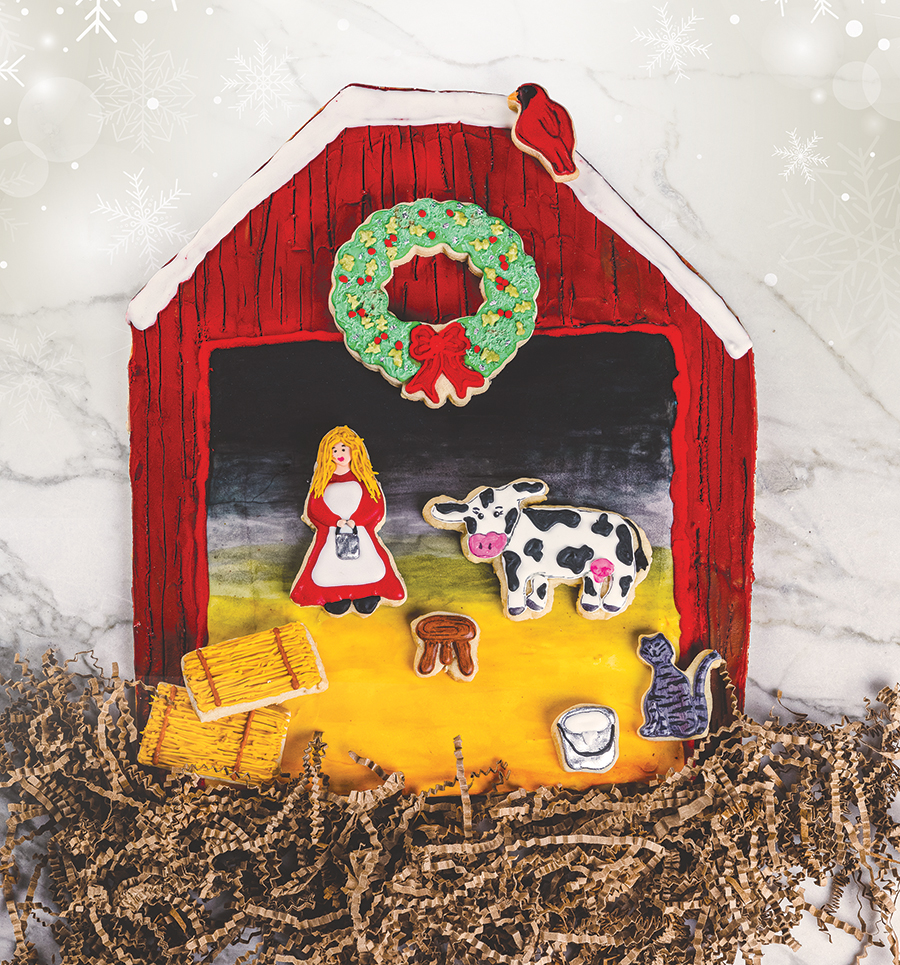 “I decided to do the scene with a big red barn because it’s like where I came from,” 24-year-old Ashley Garner says. “Robbins is a farm town.” She constructed an entire country scene out of movable sugar cookies finished with royal icing that anyone would like to eat and every kid would like to play with . . . and then eat. Garner started making and decorating cookies and cakes after catching the bug from watching television bakers. She posted her creations to social media, and people started placing orders. Now, she’s baking at Robbins’ new Middleton Street Bakeshop, where the owner, Carrie Ritter, allows her to work on her own business, Ashley’s Sweet Designs. 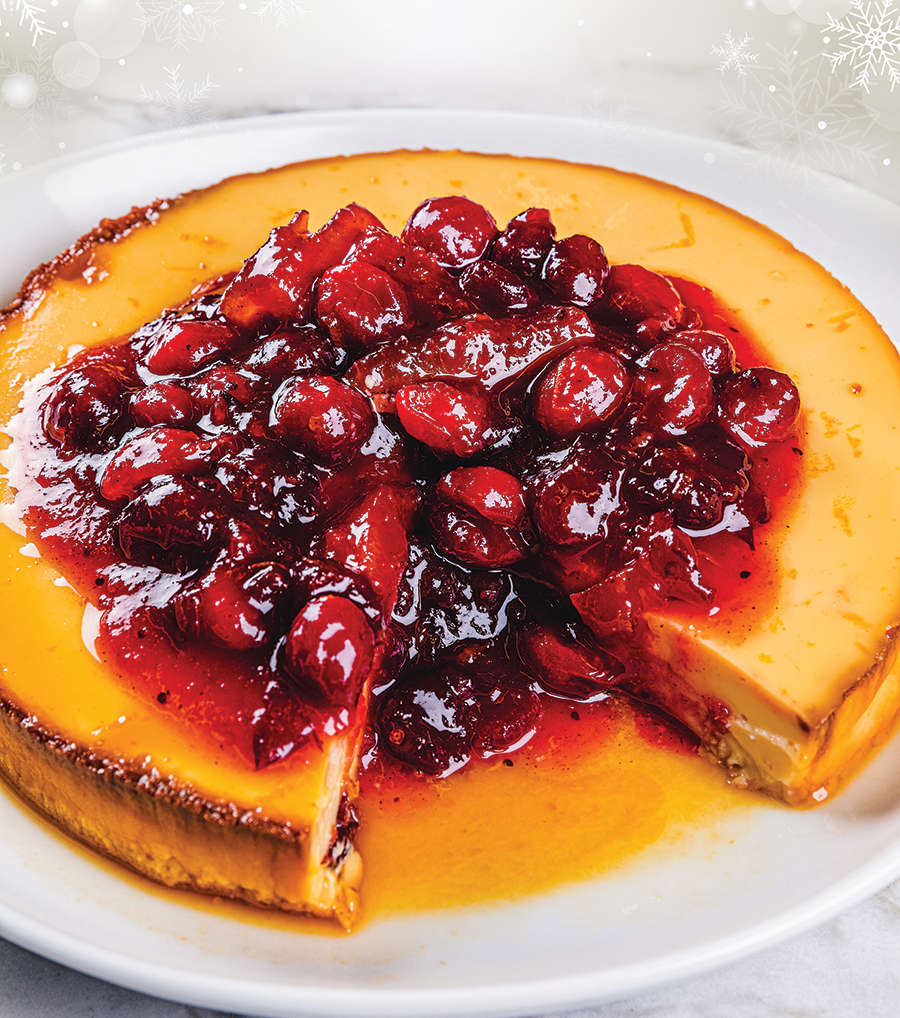 Lynette Bofill opened her eponymous bakery and café in 2019, and she’s been serving up Cuban American favorites ever since. She’s interpreted nine ladies dancing in a flan that tastes like Christmas. “My grandmother always made flan for every holiday or birthday,” she says. “It’s not a holiday without one.” Bofill’s “nine ladies dancing” is flavored with orange and cranberry and doused in a cranberry-bourbon citrus sauce. She imagined the soft, delicate caramel custard as nine elegant ballerinas, and the cranberry, citrus and shot of bourbon as their bold moves. “It comes together just like a performance,” she says. 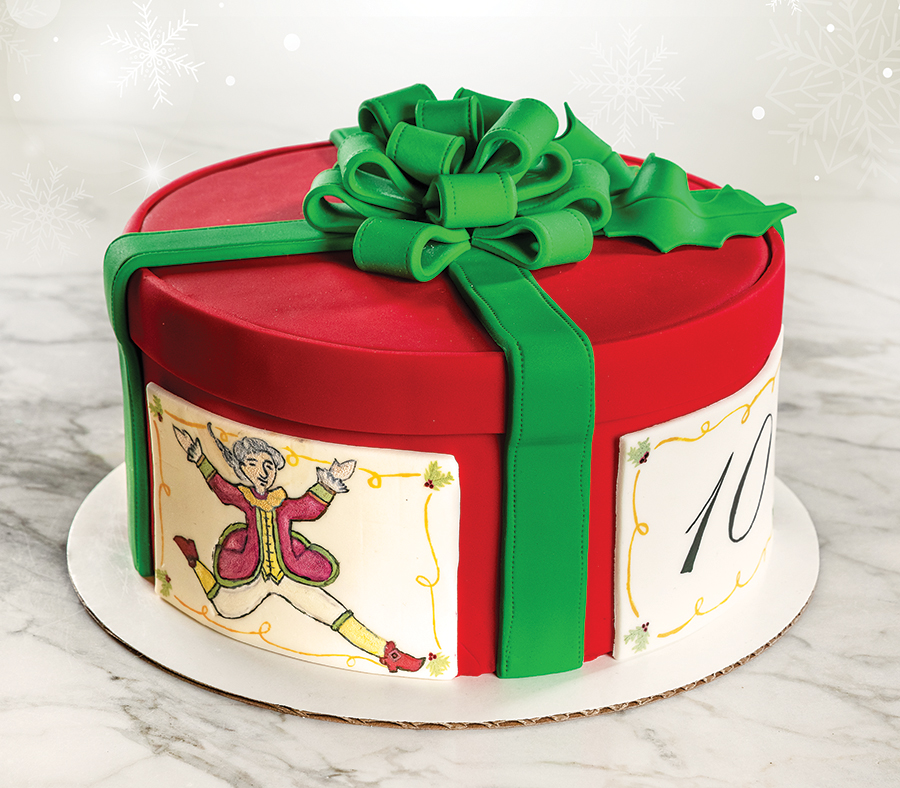 Growing up, Chelsea Schlegel enjoyed artistic endeavors like painting and sculpture. After graduating with a bachelor’s degree in hospitality and resort management, cake decorating turned out to be her match-made-in-heaven career fit. “I was always watching Food Network as a kid and loved the Ace of Cakes,” she says. Schlegel works as the cake decorator at Janell Canino’s C.Cups Cupcakery, where she created the bake shop’s “ten lords a-leaping” cake. “I decided to be pretty straightforward with it,” she says. And it paid off. 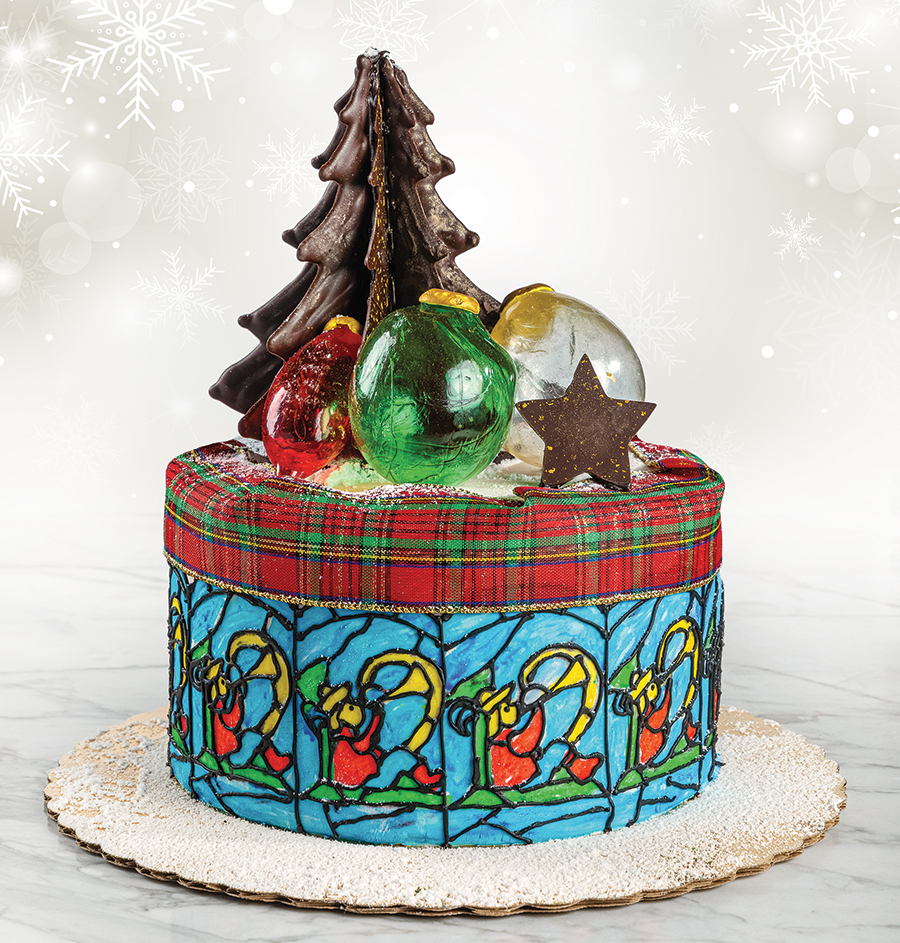 “I immediately knew I wanted to do something classic,” says Teresa Santiago, the pastry chef at The Bakehouse in Aberdeen. “‘The Twelve Days of Christmas’ is a Christmas carol written in the 1700s, and it made me think of large chapels with stained glass windows and a really traditional Christmas.” Santiago hand-piped and painted the stained glass panels on columns of fondant, shaped the Christmas tree out of tempered chocolate, and hand-blew the ornaments from sugar. “Here at the Bakehouse, we love Christmas,” she says. 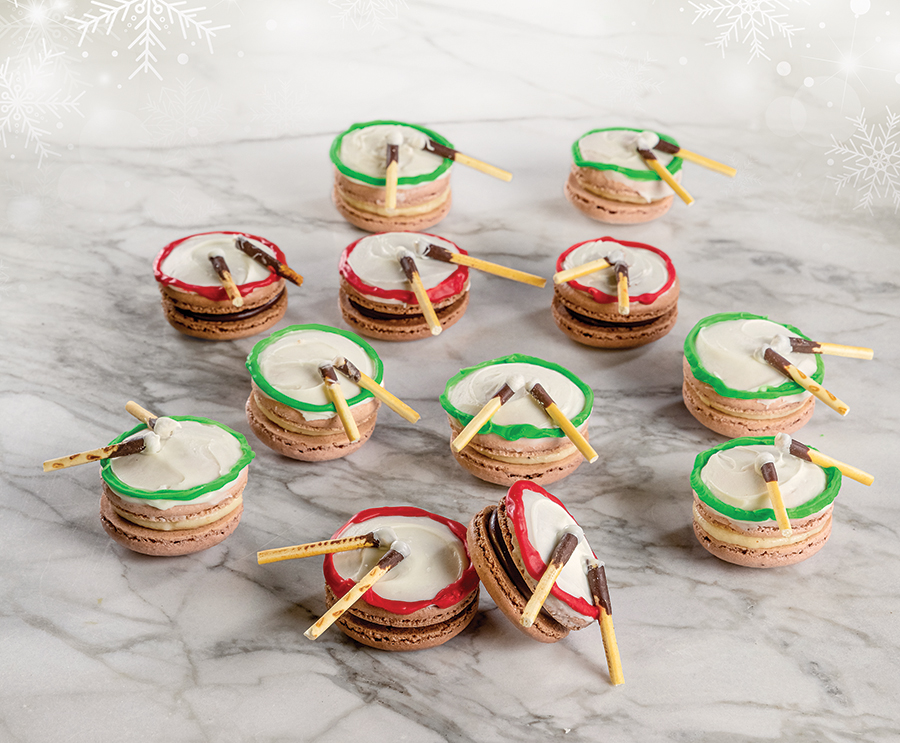 Military wives, friends and devoted bakers Morgan Wagner and Lindsay Weaver decided to tackle the art of macaron making together. They were hooked after their first batch, eventually launching their home-based business, The Macaron Sisters, to share their passion for the French cookie. “With macarons being naturally round with flat tops, we thought it would be neat to make them look like drums,” says Wagner. The lighter brown cookies with green piping are spiced gingerbread with eggnog buttercream, and the darker brown cookies with red piping are classic chocolate with chocolate peppermint ganache.