Unlike much of the rest of Moore County, State Road 1137 has changed very little since the days of my youth. Running north to south for just over 4 miles and through two different ZIP codes, the weathered two-lane blacktop is still bordered by open fields and pine forest. Interspersed here and there along its route is the occasional ranch-style house and double-wide trailer, all pretty much looking exactly the way they did in the early 1970s.

About the road’s midway point, in a sharp bend that cuts through a patch of turkey oak and longleaf, is my childhood home. It is a modest, single story, red brick house, with tall white columns extending up from the front porch, and a grey tin roof surrounded by a large well-manicured yard of centipede grass and acres of forest. The property sits atop a gently sloping hill in the far western edge of the Carolina Sandhills, near where the sandy, xeric soils of the Coastal Plain meet the densely packed clay-based soils of the Piedmont.

The skies here are wide open and free of light pollution. At night, the stars shine thick and bright and the Milky Way feels so close you can almost reach out and touch it. By day, the sky is the most brilliant shade of blue. On summer afternoons, deep purple clouds mushroom up from the east, and the sound of thunder echoes through the pines. During mid-winter, on those rare days when snow falls from somber grey clouds, one can actually hear the flakes hitting the ground.

The road itself is not much to look at and is easily taken for granted. It is not an especially scenic drive and looks pretty much like any other rural strip of asphalt throughout the Sandhills. The fields and forests that line its border do not reveal their secrets easily. But rest assured, there are wonders here.

Drive its route often enough and pay attention, as I have for nearly 47 years, and you will learn its rhythms. On most winter evenings, as the sun dips over the horizon, herds of white-tailed deer feed in the open fields that border the north end of the road near its junction with Hwy. 211. By day, brightly colored kestrels, North America’s smallest falcons, perch on the power line that cuts through those same fields. Early mornings in spring will find shiny black fox squirrels, the size of housecats, standing upright on the road’s shoulder near grandmother’s house with pine cones clasped tightly between their front paws. Blue flowers from Sandhills lupine brighten the roadside. Drive slowly on moonlit nights in May, with the windows rolled down, and you will be serenaded by the frenetic calls of whip-poor-wills. Come summer, abundant blackberries provide tasty treats for those who know how to spot their thorny shrubs growing beneath the power line cut. Heat lightning dances across the sky on most humid evenings, and fireflies blink on and off beneath the pines. The turkey oak leaves turn a deep burnt umber color in late October signaling the onset of fall. Eyeshine from grey foxes slinking across the road in front of the car late in the night is a common sight this time of year.

Yet, for all its familiarity, the road can still surprise. Just this past January, on an evening when torrential rains had supersaturated the ground for much of the day, the car headlights revealed a miniature marvel not far from the driveway to the house. Hopping out into the steady drizzle with flashlight in hand, I approached to find a 6-inch-long spotted salamander, so named for the brilliant dayglow yellow spots decorating its body, slowly walking across the road. Over all the years and thousands of times driving the road, I have never before observed this beautiful amphibian here. 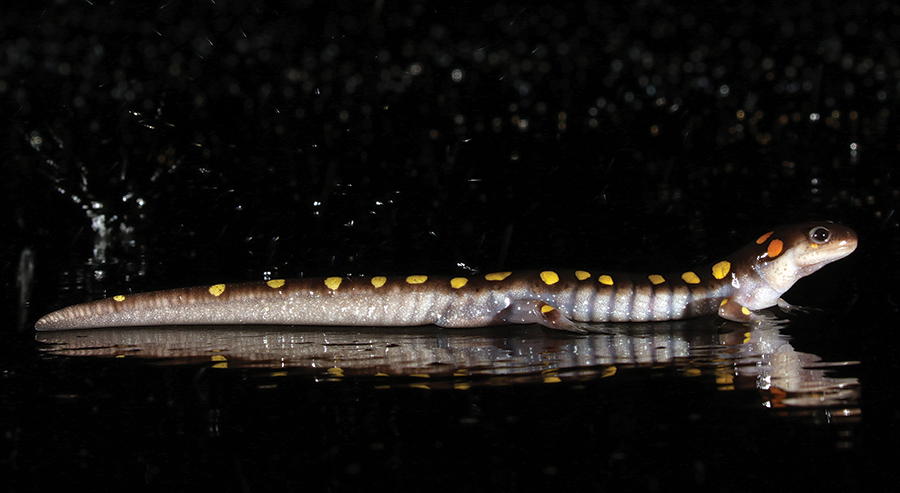 Spotted salamanders need ephemeral ponds (temporary bodies of water that dry up for part of the year) to breed and lay their eggs. After a few weeks, the eggs hatch into a larval form complete with long tails and a bouquet of gills. When the ponds dry up in the spring, the larvae transform, like frog tadpoles, into terrestrial adults. The adults leave their pond and migrate far away, sometimes up to 1 mile, and then bury themselves underground, where they will remain for a year until the next breeding season’s rains begin and they start the cycle all over again. Considering the fact that spotted salamanders can live 30 years, I may well encounter the adult found near the edge of the yard once again.

My whole childhood was oriented toward animals and the outdoors. The natural curiosity was innate. And, like many kids in rural towns, I longed to get away. Eagle Springs just seemed too small. Magazines, such as Ranger Rick and National Geographic, as well as television shows like The Undersea World of Jacques Cousteau, fueled my daydreams of exploring far-off lands in search of exotic beasts. I wanted to swim with the sharks and catch snakes in tropical jungles.

Fortunately, I have been able to live out most of those daydreams. My work has taken me around the world. I have dived with great white sharks off Mexico and caught snakes in the rainforests of Panama. After two decades of travel, I have developed a deeper appreciation for the natural world and all its wonders, from the exotic to the familiar.

Though I live far from the Sandhills today, I try to get back as often as I can. The last time I turned down the road home, it was just after sunset in late May and the sky was filled to the brim with stars. As I so often do here, I turned off the radio and rolled down the windows. About a half-mile or so from its junction with Hwy. 211, the bright beams of my headlights illuminated a herd of two dozen deer standing in the middle of the field, their eyes glowing a greenish yellow. Many lifted their heads with mouths full of grass calmly staring at the approaching vehicle. Another half-mile down the road and a grey fox dashed across the highway. Eagle Springs seemed anything but small.

Rounding the bend to the old brick house, a whip-poor-will called.  PS

Naturalist and photographer Todd Pusser will be a regular contributor to PineStraw. He works to document the extraordinary diversity of life both near and far. His images can be found at www.ToddPusser.com.