The Dweller of Sandy Places

A new species described from the Sandhills

One might assume in this age of globalization and the internet that there is nothing left to discover on the planet. If there are any new species of plants and animals yet to be observed by human eyes, they must exist in some poorly explored corner of Earth, tucked away in a remote Amazonian rainforest or at the bottom of the deep sea.

Of course, the trouble with assumptions is that they are frequently wrong.

We are living in an era many naturalists have dubbed “a new age of discovery.” Thousands of new species are being described each year — everything from monkeys to brightly colored tropical birds. Indeed, many new species are found in faraway jungles and at the bottom of the sea, but a surprising number are discovered right in our own backyards.

1n 1995, an entirely new species and genus of tree dubbed the Wollemi Pine, which grows over 130 feet tall, was found just outside of Australia’s largest city, Sydney. In 2010, biologists lifted a rock in the middle of an eastern Tennessee stream and found a new crayfish. At nearly half a foot in length, the Tennessee Bottlebrush Crayfish looks more like a Maine lobster than a denizen of a backwater creek.

Perhaps most spectacular of all, a new species of whale — a whale — was described in 2002 from specimens that washed ashore on the crowded beaches of San Diego in the 1970s. Originally thought to be a rare species of beaked whale from the Southern Hemisphere, biologists using advance genetic techniques, revealed that the cast-ashore leviathans were in fact a new species, which they named Perrin’s Beaked Whale after the biologist who first examined them. Despite their swimming in waters offshore our most populous state, humans have yet to observe a member of this odd species of whale alive in the wild.

In biological circles, North Carolina is frequently described as “the salamander capital of the world.” With 64 species found within its borders, North Carolina has more of the cold-blooded amphibians than any other state. Some, like the eel-like greater siren, a resident of murky, coastal swamp waters, can grow to lengths of over 3 feet. Others, such as the pygmy salamander, barely reach an inch in length and are among the smallest amphibians in the world.

Fifty years ago, Alvin Braswell, then an assistant curator of lower invertebrates at the North Carolina Museum of Natural Sciences in Raleigh, examined an unusual red salamander that had been found in the Sandhills region of the state. He initially thought the tiny 3-inch-long amphibian was just an unusual red variant of the Southern Two-lined Salamander, a common species found throughout much of North Carolina. 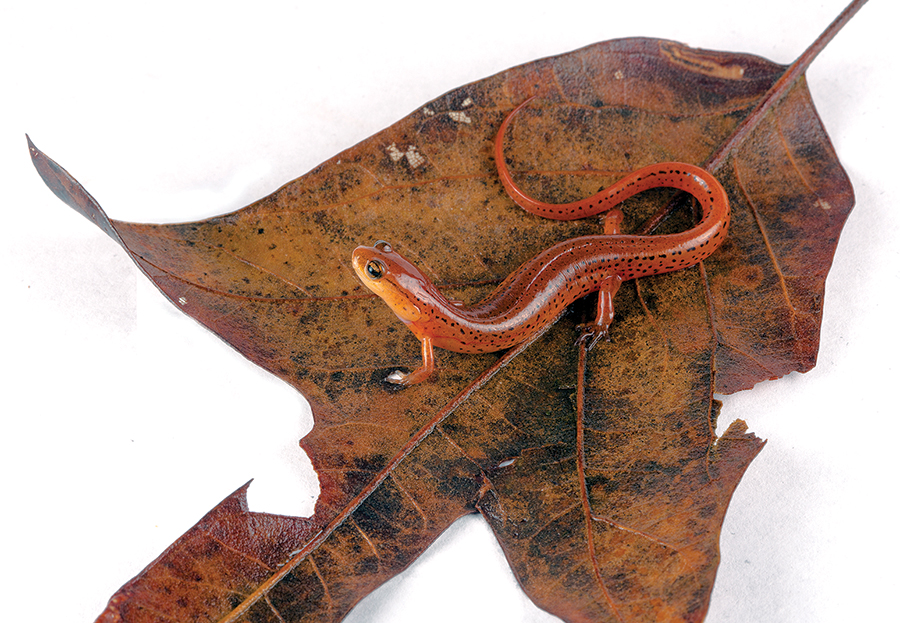 As more and more of the unusual salamanders were brought to the attention of the museum, Braswell began to suspect that they might be something new. Over time, it became clear that the little red salamander was found only along the margins of small creeks that meander through the Sandhills, and nowhere else.

In this day and age, describing a new species is a long, painstaking process that requires a lot of time and energy. Exact, minute, morphological measurements, as well as DNA analysis, need to be made across a series of collected specimens and then compared with those of closely related species. Often, the specimens were collected many decades ago, and their remains are preserved in jars of formalin tucked away in dusty museum cabinets scattered around the globe. Tracking each one down to make a proper comparative study is daunting and time-consuming.

Over the ensuing decades, Braswell worked his way through the ranks of the museum and eventually became the assistant director. Other duties called, and the description of the little red salamander was put on the back burner.

Enter Bryan Stuart, who began work at the museum in 2008 as the curator of reptiles and amphibians. Stuart, an expert in amphibian genetics and no stranger to working with new species, has found and described dozens of snakes, frogs and salamanders from the remote forests of Vietnam and Laos in Southeast Asia throughout his career.

With Braswell’s blessing, Stuart took over the study of the little red salamander and in December of 2020, published a paper (with Braswell as a co-author) formally introducing the Carolina Sandhills Salamander to the world.

Since 1735, when Swedish botanist Carolus Linnaeus introduced the concept of taxonomy, every living thing on the planet has been assigned a two-part Latin name. For the Carolina Sandhills Salamander, Stuart chose the Latin name Eurycea arenicola, which translated means the dweller of sandy places.

Though small in size, the salamander was big news in scientific arenas, and garnered worldwide coverage in the popular media. It was prominently featured on many end-of-the-year lists of the top species discoveries of 2020, right up there with a new monkey from Myanmar, a snake from India, and an orchid from Papua New Guinea.

For those who care about wildlife, the discovery of the Carolina Sandhills Salamander was a rare bright spot in the rather bleak year that was 2020. It also highlights just how little we know about this planet we call home. Who knows what other wonders are still out there, just outside the back door?  PS

Naturalist and photographer Todd Pusser, who grew up in Eagle Springs, N.C., works to document the extraordinary diversity of life both near and far. His images can be found at www.ToddPusser.com.