Of Golden Mice and Men

And the quest to see all the world’s mammals

“I have something here,” Jon Hall proclaims with an obvious air of excitement. “Can you see it?”

Nearby, another voice responds. “Yeah, I see it,” remarks Charles Foley, “but I can’t tell if it is a mouse or a bird.”

Despite standing just a few feet away, I cannot see either man, much less a tiny critter, in the deep dark of the moonless night. Both men have traveled hundreds of miles just for this opportunity and I dare not move for fear of spooking their quarry.

I hear the rustle of leaves as Jon slowly repositions himself, angling for a better view. Raising a high-tech thermal imaging scope to his eye, Jon focuses his attention on a dense thicket of briers a few yards in front of him.

The scope, as its name suggests, is able to detect heat emitted from a target, such as a warm-blooded mammal or bird, and generates an image allowing the viewer to see in the dark. Long used by the military to detect enemy soldiers on the battlefield, the technology has become more widely available in recent years and is now regularly used by police, search and rescue units, hunters, and in this case, mammal watchers.

“It is a mouse!” Jon’s voice rises an octave.

Charles, standing to my right, moves closer to Jon with his own thermal scope in hand. “Ah, but what kind of mouse?” he asks.

“There’s only one way to find out,” Jon responds. Taking his eye from the thermal scope, he raises a pair of binoculars and a flashlight with his spare hand. Bright light suddenly floods the forest, illuminating the thick tangle of vegetation, temporarily stunning the rodent who freezes in place. Staring through the binoculars, Jon proclaims, “It’s a golden mouse!”

From my vantage point, I raise my own pair of binoculars to my eyes, but all I can see is a hind leg and tail of the small mouse through the dense vegetation. I am unable to see enough detail to determine exactly what type of mouse it is. Charles, too, only catches a glimpse of the animal before it darts out of sight.

I should pause here. Perhaps by now, you might be wondering why three grown men would be standing in the middle of a brier-laden Carolina forest in the dead of night, each with thousands of dollars worth of specialized equipment in hand, trying to spot a mouse. A mouse, for Pete’s sake? 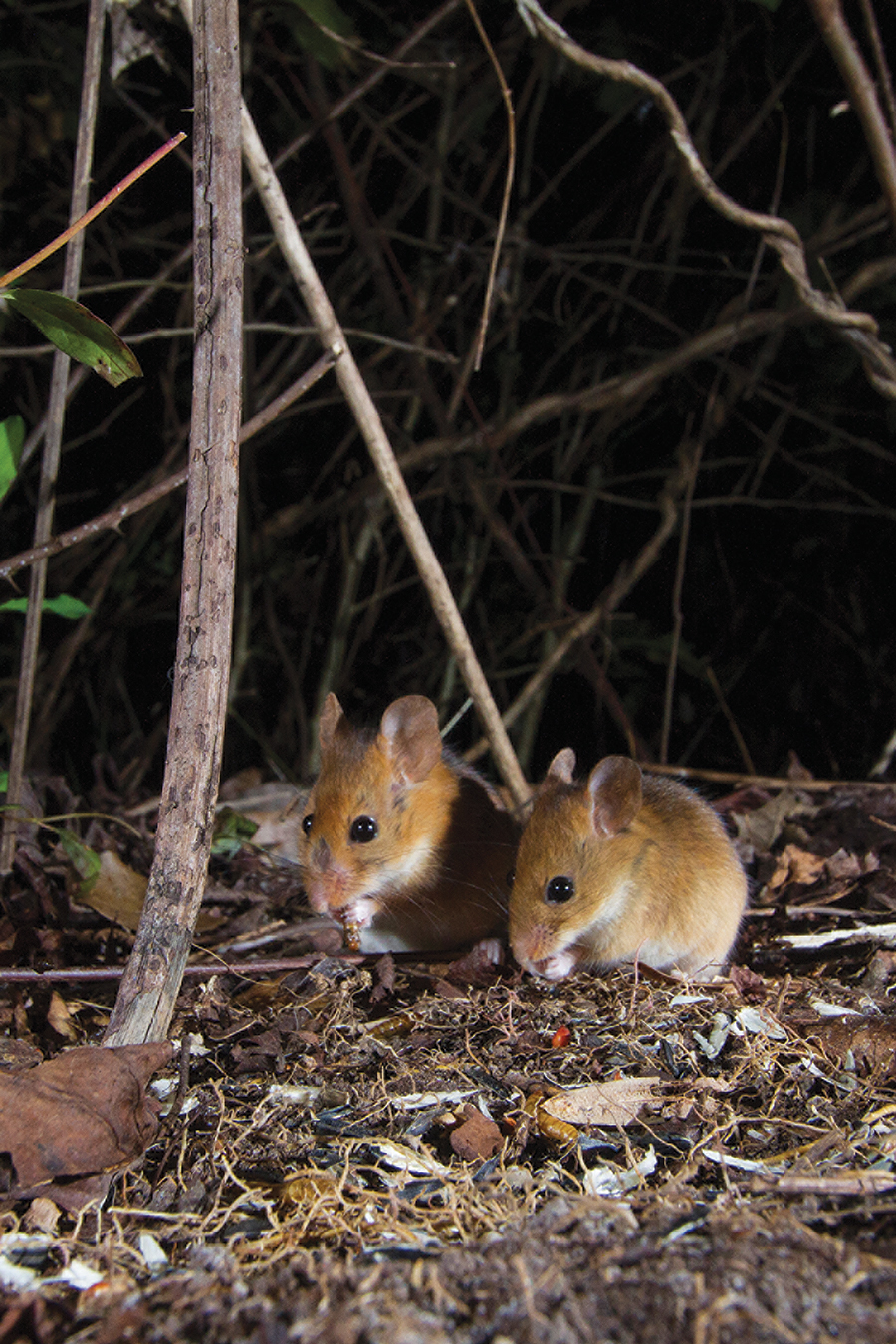 Ahhh, but not just any mouse. With a prehensile tail built for a semi-arboreal lifestyle, the enigmatic rodent is the only member of its genus. Active mainly at night and rarely observed in the wild, its lustrous golden-brown coat has captured the imagination of naturalists for generations. Famed 19th century painter John James Audubon was so enamored with the golden mouse that he once remarked, “In symmetry of form and brightness of color, this is the prettiest species of Mus (mouse) inhabiting our country.”

More importantly for Jon and Charles, who have dedicated their lives to seeing every one of the approximately 6,500 species of mammal on the planet, it was a mouse neither had observed alive in the wild.

Jon, currently based in New York, works as a statistician for the United Nations measuring the happiness and well-being of human populations. In his spare time, he maintains the internet’s premiere mammal watching website (www.mammalwatching.com). Much like more familiar bird-watching websites, Jon’s webpage regularly provides updates on interesting sightings and trip reports of mammal encounters from Borneo to Mexico. It was through the website that Charles (a researcher who has studied elephants in Tanzania for three decades) came to know Jon. The two men travel frequently together and currently host a podcast dedicated to the ever-growing pastime of mammal watching.

Last fall, I reached out to the men suggesting that they interview a friend of mine who has seen most of the world’s species of whales and dolphins. Through our conversations, I casually mentioned that they should come and visit me in North Carolina and perhaps I could show them a red wolf, the world’s rarest canid. With interest thoroughly piqued, Jon asked about other potential mammal species in the area, and that is how the subject of the golden mouse came up.

I confessed to not knowing much about golden mice, so I started asking around my social network of nature nerds and biologists if they knew of anyone who has encountered the species in the Carolina wilds. Before long, I was directed to Floyd and Signa Williams, two retired state park rangers, who had seen and photographed the mice on their rural Gates County property in years past.

Readily agreeing to help, Floyd and Signa soon located a dozen golden mice nests along the edge of a beaver swamp behind their house. The nests, unlike those of other mouse species in the state, are spherical in shape, much like a small soccer ball, and constructed of leaves, small twigs, and bark. On their property, the nests were located between one and eight feet off the ground in dense tangles of greenbriers and holly trees. 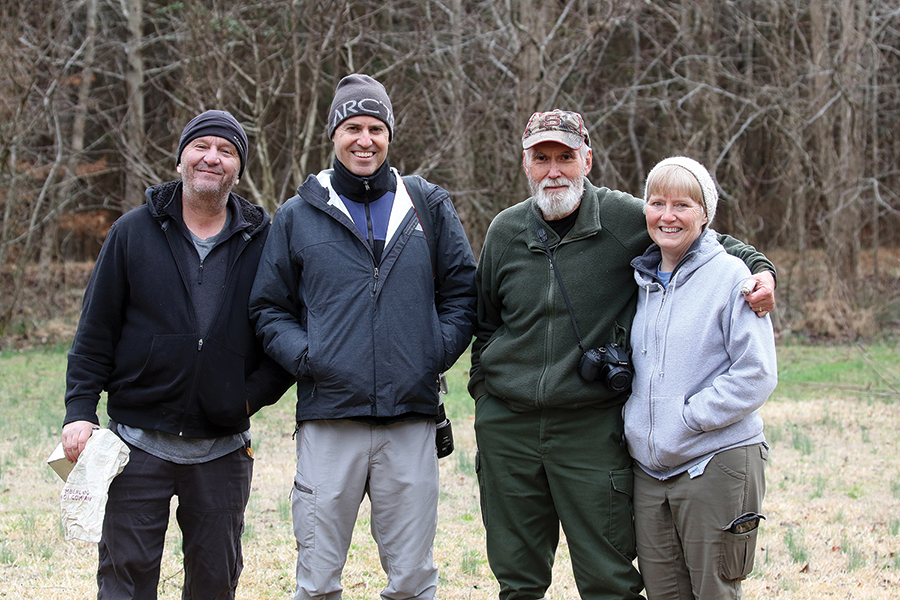 After the brief encounter with the mouse in the brier thicket, we struck out finding any more the rest of the night, despite using the high-tech thermal scopes. Somewhat disappointed, we left Floyd and Signa for the evening and returned to our Airbnb rental over an hour and a half away.

The next morning, Signa texted to inform us we had caught a pair of golden mice in some of the Sherman Live Traps that we had placed along the edge of the swamp the day before. Ecstatic, we raced the 70 miles back to their house.

On our way, Jon mentioned that a golden mouse is worth seeing up close. Peering into the aluminum trap, I could see what all the fuss was about. A golden mouse is an exquisite small mammal with large, curious eyes and a luxuriant golden pelage, unlike the muted greys of more familiar mice found inside homes and gardens. Simply put, the small, golden fluff ball staring back at me was the most beautiful mouse I had ever seen.

I placed the mouse inside a large photo tent where we spent the better part of an hour taking photographs and admiring its cuteness. All the while, the mouse remained surprisingly calm and docile. After its glamour shots, we returned the mouse, unharmed and no worse for the wear, back where we found it.

A round of high fives and congratulations ensued. For Jon, it was his 1,999th species, an extraordinary accomplishment and a testimony to his lifelong obsession.

Despite having traveled the world and seeing many of its most charismatic mammals — everything from snow leopards in Asia, gorillas in Africa, and jaguars in Brazil — both Jon and Charles were all smiles and completely over the moon with their golden mouse encounter here in rural North Carolina.

I admire that about them. PS

Naturalist and photographer Todd Pusser grew up in Eagle Springs. He works to document the extraordinary diversity of life both near and far. His images can be found at www.ToddPusser.com.