When you sidle up to the bar before ordering a beer or cocktail, you probably don’t expect your bartender to have authored two books and numerous articles, have a graduate degree in liberal studies, or to be a leading advocate in the movement for historical justice. But if you know Joel Finsel and he is the one behind the bar, then that’s exactly what you would expect. You would also expect a very, very good drink.

One crisp day in early fall I spent an hour or so with Joel in downtown Wilmington at the Brooklyn Arts Center, a gorgeous, deconsecrated church that was built in 1888 and passed through the hands of numerous congregations before falling into disrepair and being saved by a public and private partnership in the late 1990s. Over the past decade, the Brooklyn Arts Center has hosted countless weddings, community events and concerts by musicians like Art Garfunkel, Brandi Carlile and Old Crow Medicine Show. The sprawling complex, which features the event space, a bridal suite, an annex that once served as an old schoolhouse, a courtyard and the Bell Tower Tasting Room, is now a busy hub of art, culture and celebration. It was in the Bell Tower Tasting Room where I found Joel, ready and waiting to mix up a few cocktails that are perfect for the upcoming holiday season.

As Joel mixes our first cocktail — a mulled apple cider — I ask him how he’s been able to build a career as a bartender with one foot in the literary world, another in modern art and another (apparently Joel has three feet) in bartending. He smiles. “I think I’ve always been attracted to chaos,” he says, which surprises me. Joel is one of the most measured people I’ve ever met, and to watch him work behind the bar is to witness a seemingly effortless precision.

The steaming hot apple cider is poured with bourbon and garnished with star anise, lemon and a cinnamon stick stirrer. It tastes like a winter evening, presents wrapped under the tree and the kids blessedly asleep before the chaos of Christmas morning.

I ask Joel about his childhood growing up in Lehighton, Pennsylvania, a small blue collar town on the banks of the Lehigh River about an hour and a half northwest of Philadelphia.

“Until I was 5, my family lived in a trailer on a dirt road, 2 miles up along the side of a mountain. It was awesome because there were bears and deer, and you could just pick up rocks and there were orange salamanders everywhere,” he says. “And then my great-grandmother passed away and we moved into her house in town, which changed everything for me. I was suddenly in the middle of a small town and I could walk to high school and there were girls there. And there was a basketball court nearby, which I pretty much lived at.” 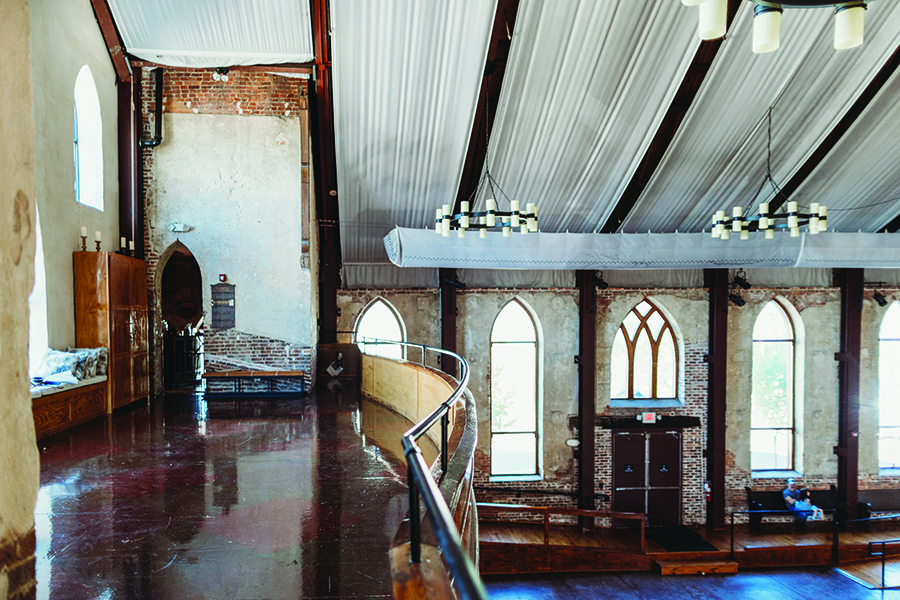 The abstract expressionist painter Franz Kline also moved to Lehighton in his youth in the second decade of the 20th century. Joel’s mother had grown up in the area hearing stories about Kline and his work, and her interest led her to become one of the country’s pre-eminent specialists on everything from Kline’s paintings to his career and biography. When Joel was young, his mother began working on a biography of Kline, but it wasn’t until Joel graduated from college and was teaching school in Philadelphia that he asked for a look at the manuscript.

“I was home for Christmas, and I said, ‘Mom, what’s up with that book?’ I asked her if I could take a look at it. And then I realized what she had was a huge document of notes, but no structure.” Mother and son began working on the project together, and they would do so for over 20 years before Franz Kline in Coal Country was published in 2019, the first biography to examine this major American artist’s formative years in Pennsylvania, Boston and London before he became one of the founding members of the New York School.

The next cocktail Joel prepares is called the Cat’s Whiskers, a tipple of rye whiskey, honey syrup, fresh lemon juice and Angostura bitters that tastes like a party thrown by Jay Gatsby. If I were to turn and look over the balcony here at the Brooklyn Arts Center, I would almost expect to see a jazz band taking the stage, the audience filled with men in smart suits and women in flapper dresses, snow pounding against the stained glass windows as the hour tips past midnight.

The book on Kline was not the first Joel had published. During a long career as a bartender — one that began in college and would lead to reviews and spots in publications like Bartender Magazine, Cosmopolitan and a profile in Playboy as one of the country’s Top 10 Mixologists — Joel had accumulated countless stories from co-workers and patrons, many of which he recounted in his 2009 book Cocktails & Conversations, which expertly mixes barroom lore with the histories of mixology and cocktail recipes.

One bar customer who had an enormous influence on Joel’s life was the abstract expressionist Edward Meneeley, a contemporary and friend of artists like Willem de Kooning and Andy Warhol. Joel and Meneeley met while Joel was in college at Kutztown University and working at a bar across the street from Meneeley’s art studio.

“Ed introduced me to mixing things like Campari and soda back in the day when everyone drank Captain and Coke, circa 1998,” Joel says. “Ed would come into the bar and throw his old copies of The New Yorker at me and tell me I needed to educate myself out of this town, so I got to know the work of the magazine’s art critic Peter Schjeldahl pretty well. I wasn’t even 21 yet. I started tending bar at 18, which was legal.”

The next cocktail Joel makes is called Lavender 75, and while it doesn’t include Campari, the West Indian orange bitters combine with gin, fresh lemon, lavender syrup and a splash of dry Champagne to give the drink an incredibly complex and layered taste, both dry and deeply flavorful.

When Joel and his wife, Jess James (who owns a vintage clothing boutique in Wilmington that is a habitual stop for Hollywood actors when they’re in town filming movies), moved to town in 2005, Joel brought his two main interests south with him: mixology and contemporary art. He took a job as the bartender of Café Phoenix in downtown Wilmington and designed one of the first craft cocktail menus in the city. He also curated the art on the restaurant’s walls, hosting artists like his friend Meneeley and Leon Schenker. Suddenly work by internationally known artists valued at tens of thousands of dollars was hanging where local art had once dominated the walls.

It was after a few years in Wilmington, where he eventually earned an MA in liberal studies from UNC Wilmington, that Joel first learned about the 1898 race massacre, the only successful coup in American history that saw white supremacists murder untold numbers of Black citizens while overthrowing the duly elected local government. He was shocked to learn that something so horrible had happened in a city he had quickly grown to love.

After researching the events surrounding 1898, Joel co-founded the nonprofit Third Person Project, which is dedicated to uncovering and preserving history. One of the group’s first projects was gathering and digitizing copies of The Daily Record, which was the only daily Black newspaper in North Carolina before it was destroyed by a mob during the events of 1898. Since then, the organization has gone on to host musicians like Rhiannon Giddens, who came to Wilmington to perform the “Songs of 1898” at a 2018 event with Joel’s Third Person co-founder, writer John Jeremiah Sullivan. Third Person has gone on to lead Wilmington in efforts to save historic buildings, mark burial places, and uncover lost histories, often by partnering with local institutions like UNC Wilmington’s Equity Institute.

On a smaller scale, Joel is also contributing to local history with the impact he’s had on its cocktail scene. The final drink he mixes — the True Blue — is a good example. He created it years ago when he designed the cocktail menu for the Wilmington restaurant True Blue Butcher and Table. The cocktail remains a fixture and, with its mix of pear-infused vodka, elderflower liqueur, lemon and a splash of dry Champagne, I understand why.

Our interview is over and, as Joel cleans up behind the bar, he tells me he plans to spend the rest of the afternoon working on an essay about 1898. Cocktails, conversation, curating art, correcting history. It’s all in a day’s work. 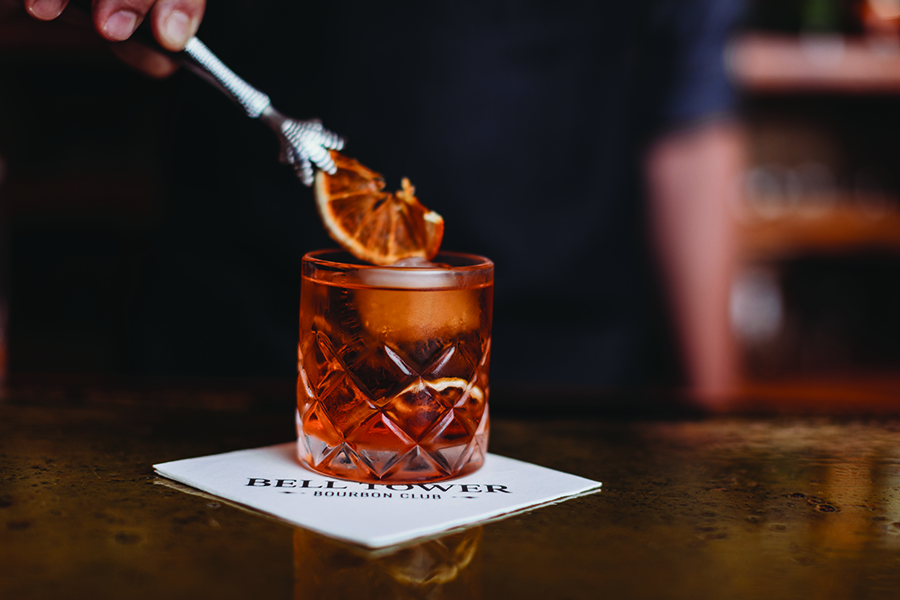 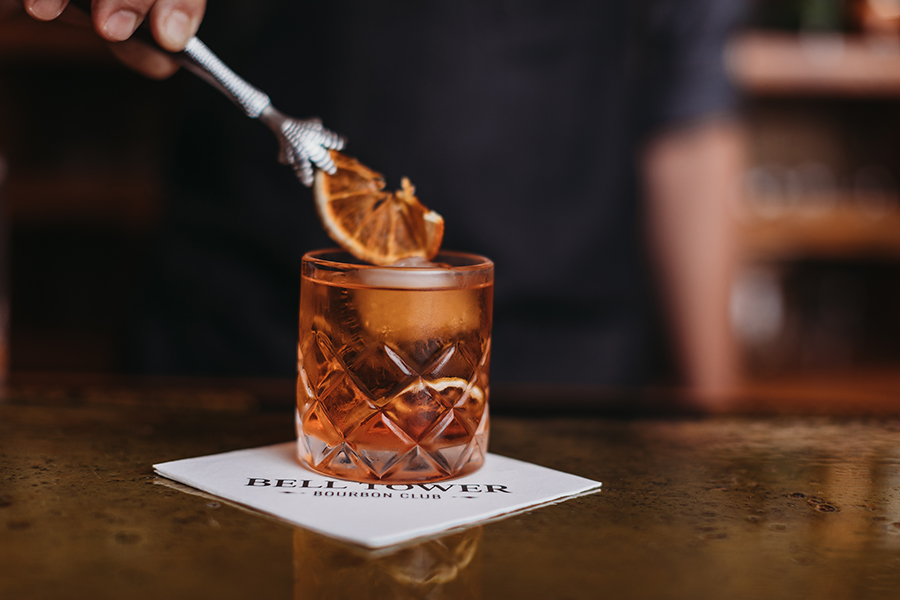 Fresh, clean, bright. Designed after research into ancient Greek formulas for the “nectar of the gods.”

1/2 ounce fresh lemon (or about half a lemon)

Pre-chill cocktail coupe and set aside. Mix vodka, elderflower liqueur and fresh lemon over ice in a mixing glass. Shake hard for at least 12 seconds. Discard ice from pre-chilled coupe back into ice bin. Strain mixture into coupe. Float Champagne and soda. Garnish by dropping in 3 blueberries or thin slice of pear.

Substitute gin and it becomes The Bees Knees. Both are Roaring ’20s slang for the height of excellence.

Pre-chill cocktail coupe and set aside. Combine all of the ingredients over ice and shake for 12 seconds. Discard ice from pre-chilled coupe back into ice bin. Double strain into coupe (make sure no green flecks of mint end up in anyone’s teeth). Garnish with fresh mint top.

The classic French 75 cocktail was named after a cannon. This places a flower in the barrel.

Pre-chill a cocktail coupe and set aside. Combine all of the ingredients over ice and shake for at least 12 seconds. Discard ice from pre-chilled coupe back into ice bin. Strain the chilled mixture into the coupe. Garnish with 3-4 dried lavender buds.  PS