The Community of Food

It’s a business, an art and a science and it all eventually winds up on our tables.  These are just a few of the folks who make dining in the Sandhills a fresh, friendly, delicious experience. 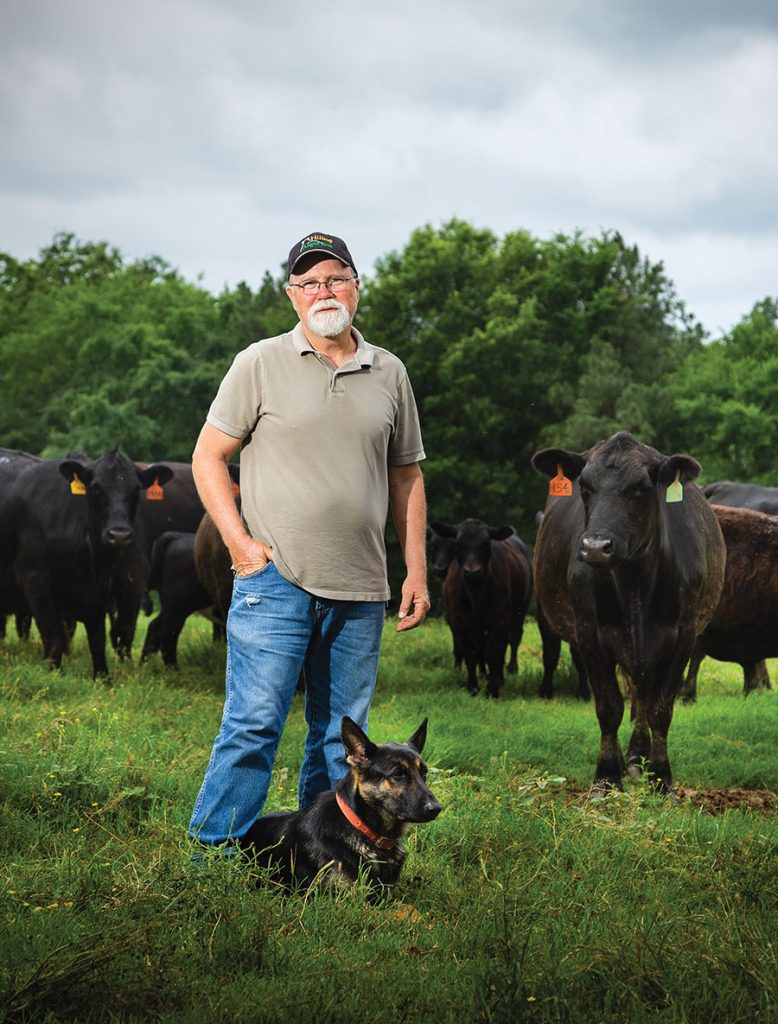 “I’ve been here all my life,” says Dale Thompson, looking out over the rolling hills near the Uwharrie National Forest from the second story of the green barn where he organizes the distribution of his grassfed beef. His parents were loggers, then dairy farmers. “Things change. We have a cattlemen’s meeting every month during the winter. We had a guy from N.C. State come and put on a program about direct marketing. My oldest son talked me into trying it.”  They started with Earth Fare in Asheville in 2011. “I figured that if it was good enough for Earth Fare we could try a market. It’s a big step to go to a market. You’re afraid your product will be rejected. We started in Southern Pines and Pinehurst. It just grew and grew and grew. Now we sell all of our production. People like to have a clean food, know what’s in it, know where it comes from.” Hilltop adheres to the protocols of the American Grassfed Association. The cattle are never given growth hormones or antibiotics. The beef is processed and packaged by Mays Meats in Taylorsville. In addition to Hilltop’s beef, artisan salami and sausages, they offer lamb on a limited basis and heritage pork. They sell directly to Ashten’s, who has been with them since the beginning, and Sly Fox. Their reach extends as far as Wilmington. Thompson has roughly 300 customers there who place orders online. “We meet them in a parking lot on Sunday morning, the first Sunday of each month,” he says. “Anywhere from 50-70 people come in an hour and a half.” Thompson’s wife, Sharon, grew up on a farm 3 miles south of Mt. Gilead. “She was raised on a farm. I was raised on a farm,” Dale says. “I’m born on the land. The only way I can leave it is to sell it.” And that’s not about to happen. 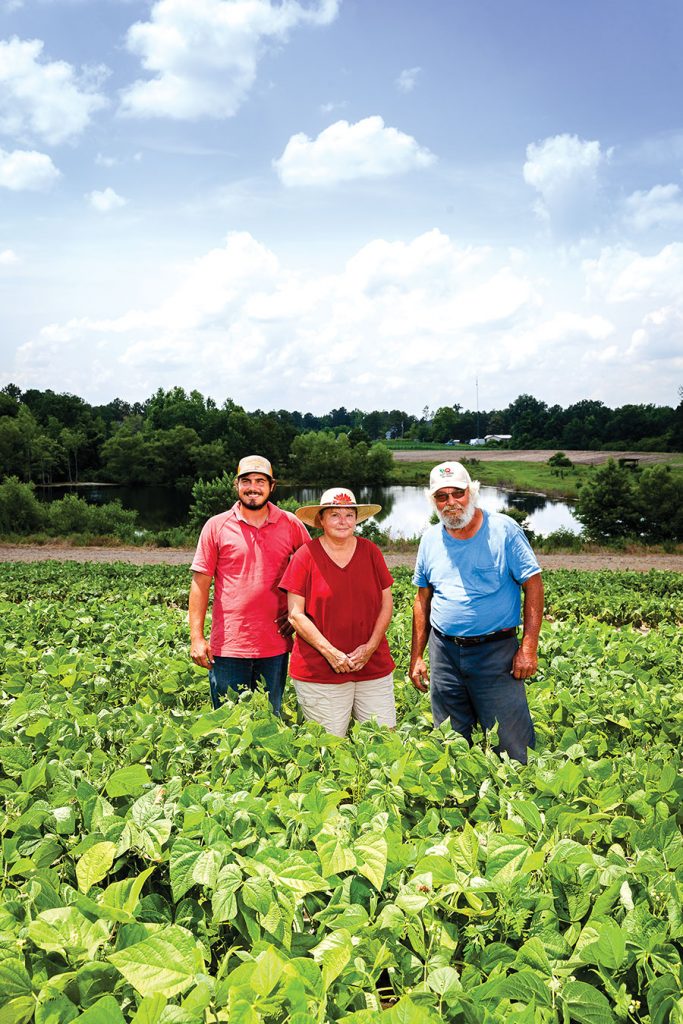 The transition started with asparagus. Where there once was a hillside full of tobacco, now the farm on Bibey Road in Carthage grows nothing but produce. “I started playing with asparagus,” says Gary Priest. “Somebody said I couldn’t grow it.” Besides, the farmhands needed something to keep them busy in the spring. “Now all the tobacco’s gone to a different farm,” says Gary’s son, Ben. “We should be growing more produce this year than we ever have. That field right there gets triple-cropped. Soon as those peas are done, I planted kale where the first pea patch was. Soon as the potatoes are gone, something else will be there. Collards or something. We have carrots, onions, garlic. Green beans on the hill where you drive up.” The Priest farm devotes somewhere between 1/4 and 1/2 acre to asparagus. “Then we had more than we could just sell to the restaurants and we started going to the farmers market and the Farm to Table got started,” says Ben. “We don’t plant on speculation. Half of it is sold when we plant it.” And they’re particular about what they deliver. Someone once approached Gary looking for advice on marketing a crop of strawberries. “You send them the very best you got because you’re not just selling strawberries,” he told them. “You’re selling your farm, your name, your reputation and they won’t forget it you dump something on them.” The Priests supply produce to nearly a dozen local restaurants, including Ashten’s, Chef Warren’s, Elliott’s on Linden, Restaurant 195, Sly Fox, Ironwood, Scott’s Table, Thyme and Place Café and The Bell Tree Tavern. “Stuff that’s grown under plastic is fine,” says Gary, “but it doesn’t taste like something grown in the bare ground.” 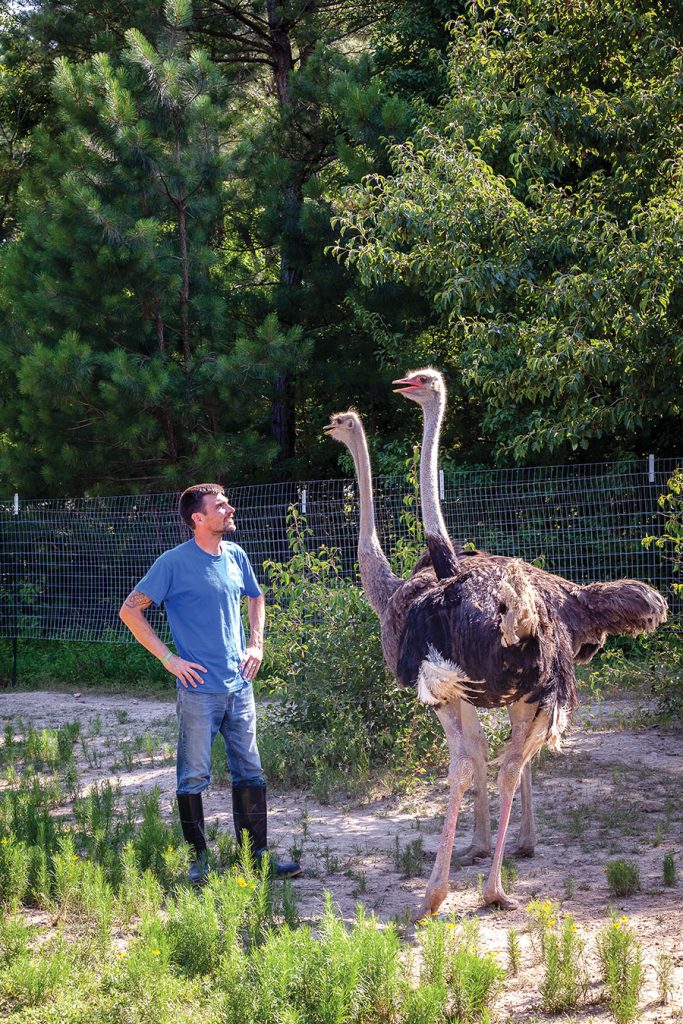 In September 2015, Ryan Olufs and his wife, Gabriela, crammed everything they didn’t sell or give away into their Dodge Challenger and moved from the San Fernando Valley in California, to Robbins, North Carolina, stopping along the way to see Yellowstone and Mount Rushmore.  “We wanted to move to a more rural region, get away from the big city lifestyle,” says Ryan. They did it in a big way. After purchasing a farm in Robbins, they decided they needed to put something on it. “I came across ostrich, really for the feathers. Then we found out that the meat is the No. 1 product,” says Ryan. “Wow, you can eat an ostrich? The more we researched it more it appealed to us. Being first-time farmers, they don’t require as much husbandry as other animals. Ostriches have one of the strongest immune systems of any animal. They’re completely immune to avian flu. They require no vaccines. They lay eggs. And it’s just about the healthiest meat you can eat, either red or white.” So, with the help of Ryan’s brother, Robert, who is in the military, the Olufs planted their urban roots. They revitalized the pastures and put in fencing. They started with two birds, Ed and Bella, in 2016. Now they have 19 birds, 15 breeding stock and four juveniles for processing, done by Chaudhry’s in Siler City. “There’s exploding demand outside the United States,” says Ryan. “Right now ostrich sells for more than Kobe beef in Japan.” With production in its infancy, the Olufs sell locally at farmers markets in Southern Pines and Pinehurst and a butcher’s market in Raleigh. “Chef Warren’s has it on the menu,” says Ryan. “Sly Fox has done it before. Ashten’s buys the eggs from us and they make crème brûlée and ice cream out of them. People will actually come to the farmers market to tell us how good the ice cream is at Ashten’s.” 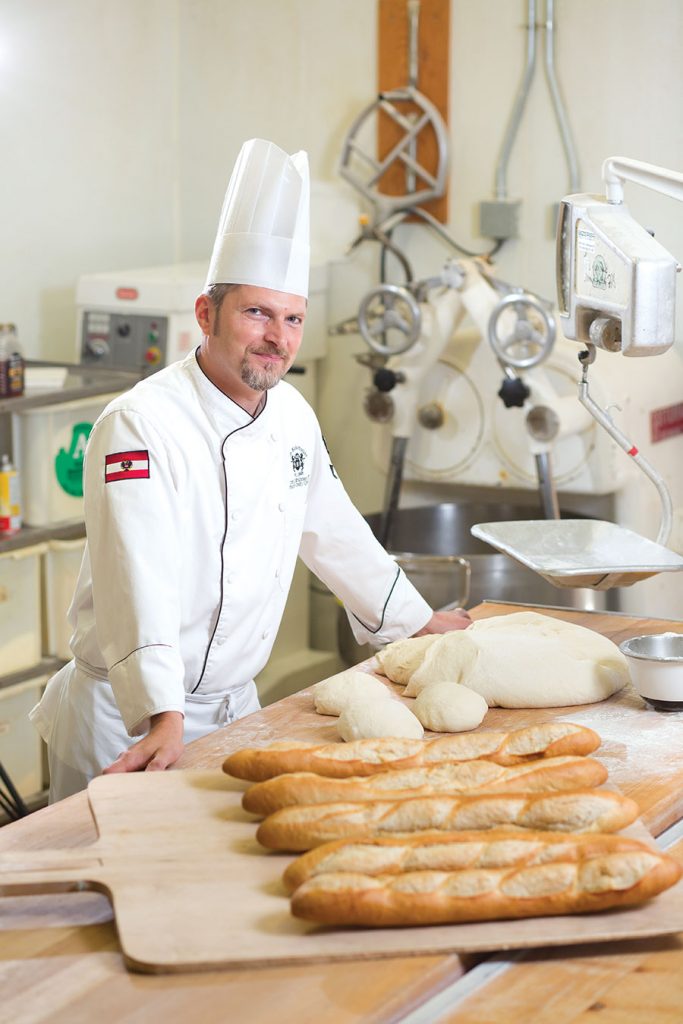 Martin Brunner’s father, Kurt, who started The Bakehouse, was a master baker. Martin’s grandfather was a master baker. His great-grandfather was one, too. And his great-great-grandfather before that. Five generations of experience floats out of the The Bakehouse kitchen on the scent of fresh bread. Martin, who emigrated from Austria in 1991, is also the baking and pastry coordinator at Sandhills Community College. The Bakehouse menu’s Spanish flair comes from Martin’s wife, Mireia, and her mother, Dolores. “A lot of the recipes here are my mom’s, my dad’s, my grandfather’s, my great-grandfather’s,” says Brunner. “Actually the recipe we use the most is my grandmother’s Black Forest cake. We’ve been in the United States 26 years and I was a little kid eating it, so for 34 years we’ve made the same cake.” In addition to the restaurant, they sell wholesale to the Pinehurst Resort, Pine Needles, Restaurant 195 and various retirement homes. “We do a lot of brioche and burger buns for food trucks. The biggest thing is that we — all the restaurants here in town — work really hard to be special,” says Brunner. “If I can add a burger bun that I only make for you and you’re going to put your signature burger on it, that’s what we’re all about. We don’t mass-produce.” 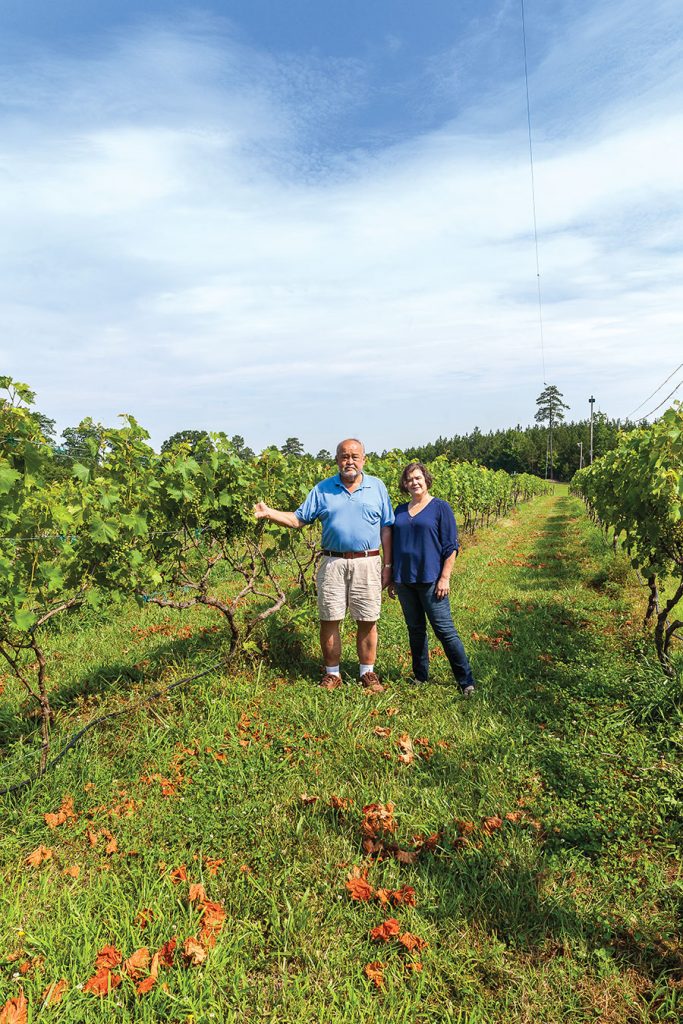 Full-time landscapers, Denise and Ronnie Williams branched out from dogwoods and maples to chambourcin and traminette. Grapes, that is. “We have a nursery farm with ball and burlap stock on it. Machine dug trees. We cleared a piece of our property to put in more of the same,” says Denise. “It was not suitable so we started researching what would grow. We kind of got into the grape-growing business. We were told it wouldn’t work here. We started ripping the soil and getting everything ready in 2004. We made our first wine in 2008. We weren’t even hobbyists. We took that first little crop and we sold 1,000 bottles. The next year we made about 3,600 bottles. In 2010 we had our best year, which was about 10,000 bottles.” Now they have 5 1/2 acres of viniferous grapes and sell wine at the Corner Store in Pinehurst and Nature’s Own, in addition to their winery on U.S. 15-501. “The last couple of years have been very challenging because of the weather conditions,” says Denise. “Twice now we’ve lost vines due to cold.” With Ronnie doing the planting and Denise the winemaking — she had a background in laboratory work from a 24-year career at the Pinehurst Surgical Clinic — they experienced some early hurdles and early successes. “We do have some wines that we pulled back,” says Denise. “But we’ve also got some wines that we’ve won medals with. We’ve won medals with our chambourcin. It’s probably our best-seller. It makes a really good medium-bodied wine. It goes really well with barbecue, with a steak. We try to use the minimalist approach to just about everything. We use the least amount of sulfites. We do it in a primitive way. We pick the grapes, bring them back to the warehouse. We have a ratchet press that’s manned by four people.” The winery doubles as an event venue. They’re in the livestock business, too. “We have lamb now,” says Denise. “In Australia they put sheep in the vineyards to mow. Filly and Colts has our racks of lamb on their menu.” The weather extremes of the last few years have cut precipitously into the harvest. “When you lose, it’s heartbreaking,” says Denise, “but it doesn’t keep us from wanting to go forward.” 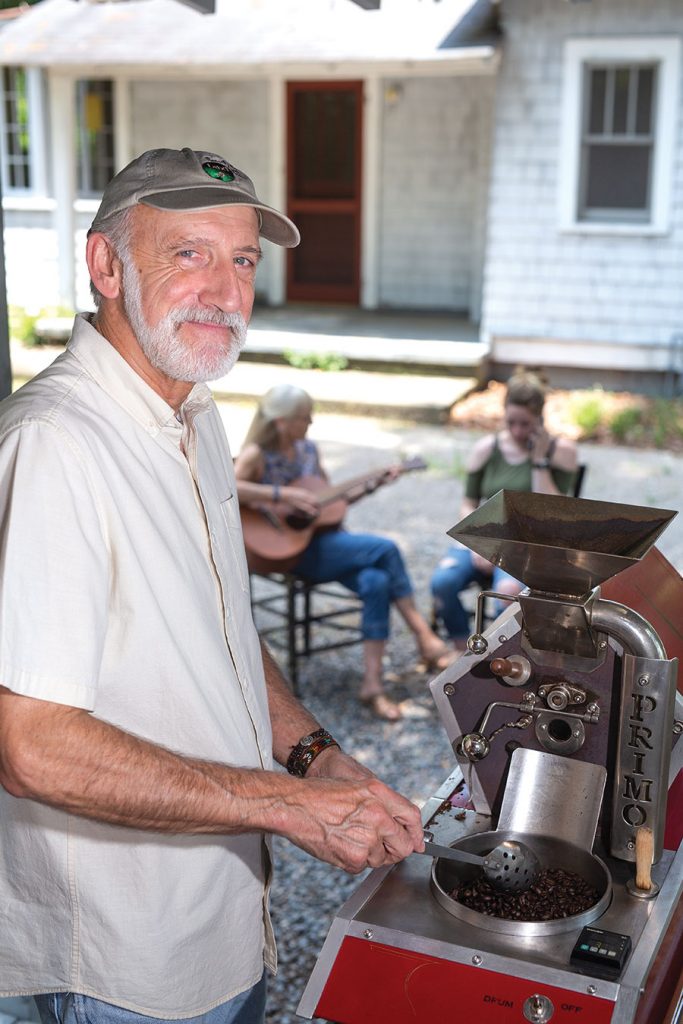 It’s kind of The Comedy Store of coffee shops. Rich Angstreich brings skill to coffee bean roasting and roasting to customer relations. “Friends of mine opened the shop and eventually I became a partner,” says Angstreich, who took over three years after it opened in 1996. At first blush, roasting the green beans was a craft in the making. “It was all trial and error in the beginning because it was just for fun. It took a while but we figured it out. A couple of visits from the fire department,” he says (comedic drum snare). Though the list of coffees fluctuates, beans currently on the docket include Colombian organic, Sumatra organic, Costa Rican, Mexican Chiapas, Honduran and a Sumatra decaf. “We’re definitely small batch, artisan roasting,” he says. Angstreich roasts for the Java Bean, The Bakehouse and Chef Warren’s. Most of his supply comes from a large importer, Royal Coffee, though he also purchases from a small company in Raleigh that deals directly with farmers. “It’s Honduran and they’re trying to expand and get a couple more coffees from Central America,” he says. “Each coffee roasts slightly differently. Some taste better when they’re dark roasted, some taste better when they’re a little lighter roast. We do everything by hand. There are no electronics to start or stop it. Everything is your eyes and your ears and your nose to figure out what to do.”