A climb above the treetops

Ever since I was knee-high to a blackjack oak sapling, a variety that used to be as thick in the Sandhills as sandspurs, I’ve always wanted to climb a fire tower. Perhaps it’s a leftover from my early days when some of us kids in Pinebluff would sneak past the watchful eye of the town’s constable, Mr. Deaton, and shinny up the ladder of the water tank. We would sit up there for hours, legs dangling over the side, and plot major adventures that we would undertake when we grew older.

Or maybe it’s a holdover of the time a group (no names here, not knowing the statute of limitations) climbed the water tank immediately adjacent to the campus of Aberdeen High School and painted ’59, the year we all graduated from the venerable learning institute. Climbing a fire tower has been a lifelong desire and a few weeks back, I had the opportunity to go up one and gaze out for miles over the tops of longleaf pines.

Highway 15-501 runs just about as straight as an arrow from Aberdeen to Laurinburg, and just across the county line into Scotland County, it passes one of the last few remaining fire lookout towers in our area. I travel this road a lot, and every time I motor past the tower, I look up and wonder. One day recently, Linda, my bride, and I were on our way south, and on a whim, I pulled into the gravel parking area adjacent to the offices of the county ranger. It was a lazy summer Sunday and no one was in the office, so I got out of the vehicle and looked up. It was amazing; the tower stretched high through the pines, and I was determined to find out its history and if it was manned or just an interesting derelict. The following day I called Neal McRae, the ranger for Scotland County, and made an appointment to see the tower and solicit some of the local history. 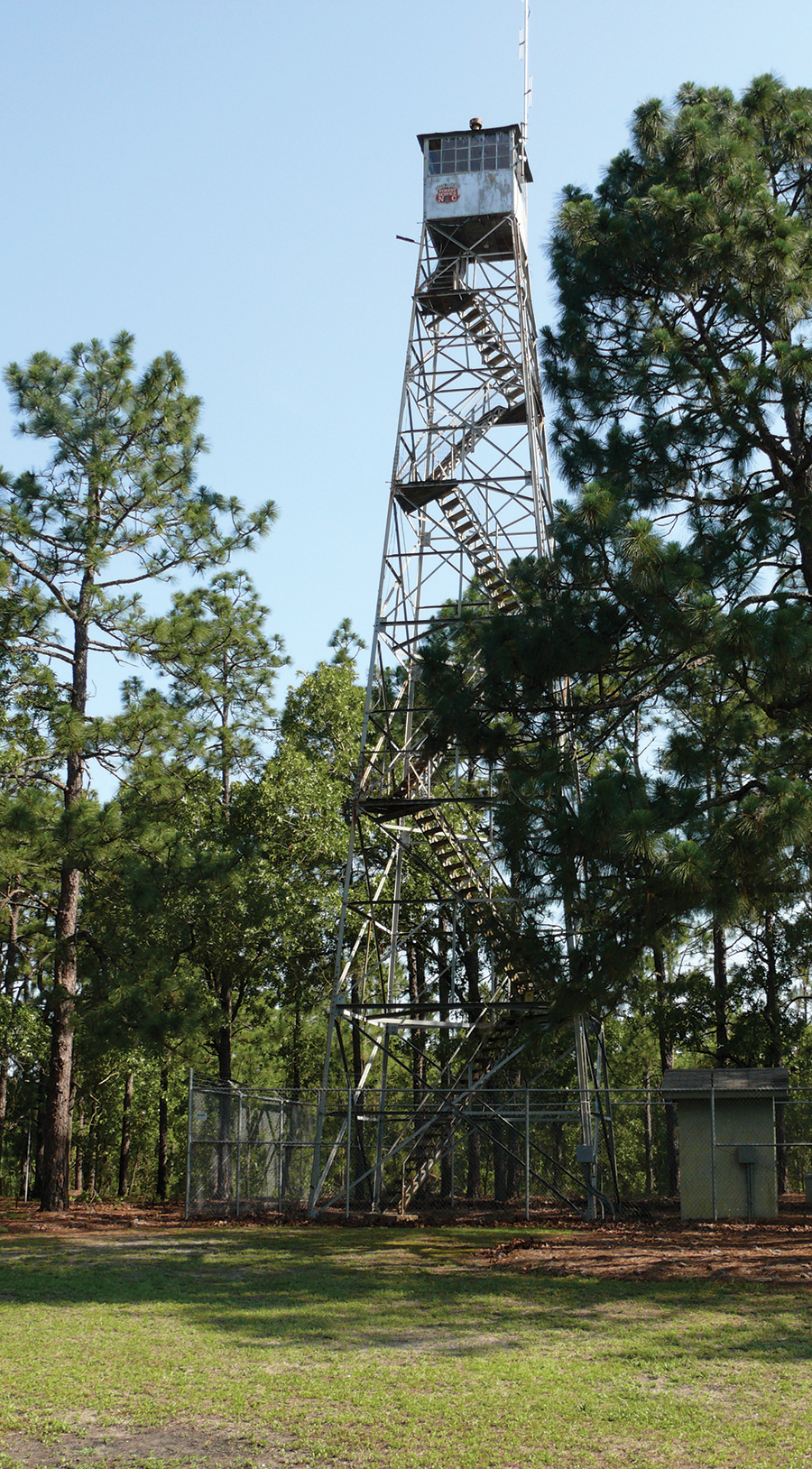 McRae could be the poster child of a county fire ranger, big and robust with enthusiasm to match his size. He cordially welcomed me to his office. Along with him was Adam Thomas, the heavy equipment operator. Both of them were full of interesting information about their jobs and the part the lookout tower played in fire control.

“The tower was built in 1933,” McRae said, “and it was located here because this is one of the highest spots in Scotland County. Today the tower’s only use is for our radio antenna, since fire control has changed in the last few years.”

“Cellphones. Everyone has a mobile phone, and once a fire is spotted, we get the information almost instantly. As a matter of fact, nearly all the 100 fire lookout towers across the state have been decommissioned. We still operate three: the one here, one in Eagle Springs and one in Hamlet. The Hamlet tower was last active in 2013. The reason we use these three is because of the game lands down around Hoffman. That area is over 40,000 acres with very few humans, so we use the towers to spot smoke during the active fire season.”

I asked about the biggest recent fire.

We left his office and walked toward the tower. I asked Thomas if he was going up with us.

“Man, I was up there three times yesterday,” he said laughing. “That’s enough. Plus, it would be pretty tight with all three of us. I’ll just wait down here.”

“These steps are original,” McRae said as we began our climb. “Made out of cypress.”

The steps were gray, rough wood, weathered by time, matching the steel girders holding up the old structure, and I could see cracks through a couple of steps.

“There are 98 steps and the tower is 90 feet tall. You holding up all right?” he asked as we neared the top. 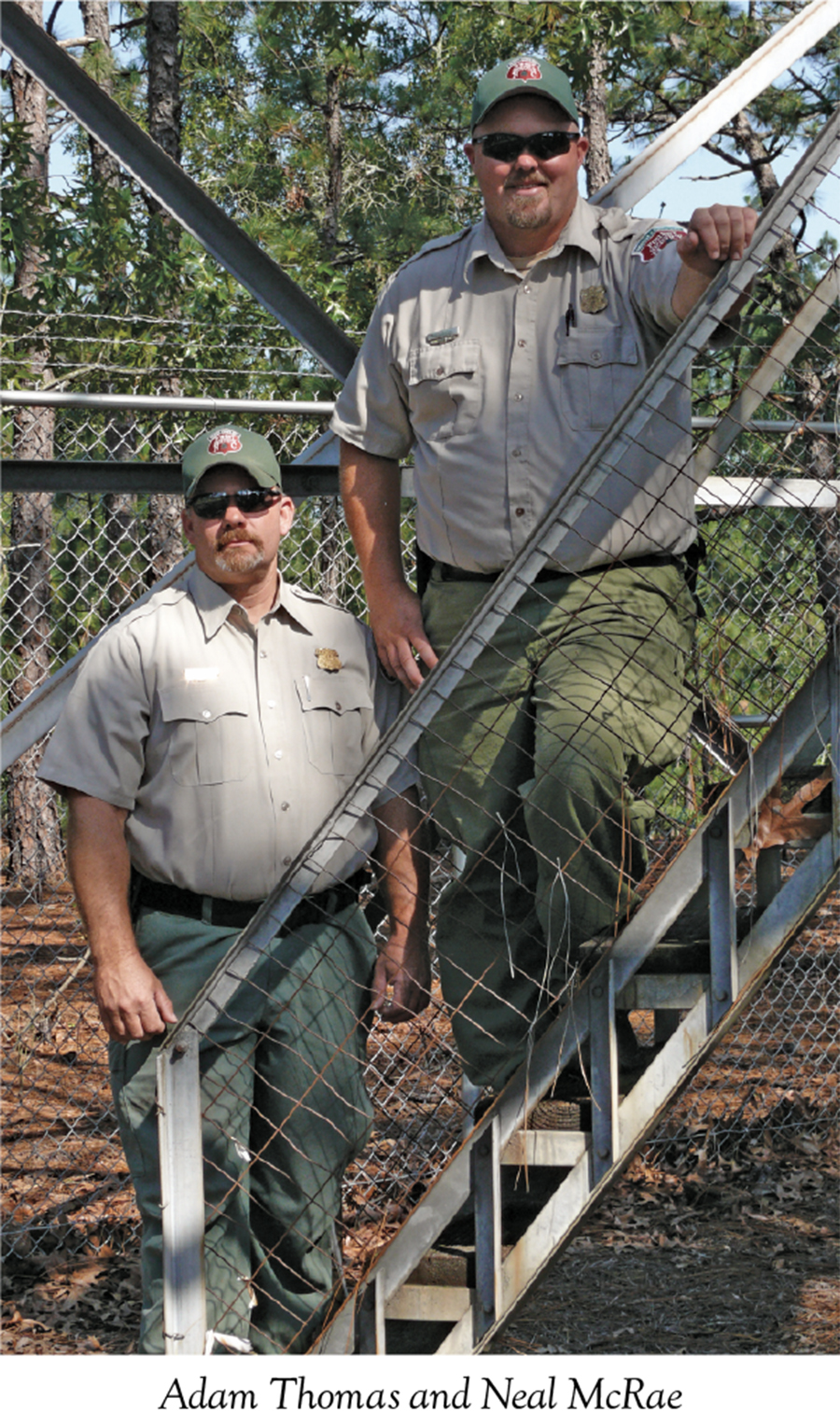 A trap door opened from the floor into the little enclosure at the top, which was probably about 5-feet square. I saw what Thomas meant about “being tight.” With the trap door closed, though, we had more room to move.

“You can see pretty good up here,” McRae said. “When it’s not so hazy, the view is tremendous.” I looked out over a vista of green. Pine trees stretched to the horizon in every direction, and I immediately understood the value of the tower in fire discovery and control. I asked when the tower last had a full-time operator.

“Mrs. Tyner operated the place for 30 years and was the last,” he replied.

McRae showed me how the 360-degree azimuth circle works in determining the exact location of a hot spot, and he raised one of the windows so we could see better out of the other side of the lookout. The old tower is holding up OK, and McRae said that as long as it is needed for radio fire control, it would remain there indefinitely.

McRae grinned and said, “You know what’s really cool about this view? To be up here on July Fourth. You can see fireworks in all directions.”

We looked around a little more and then climbed back down the 98 steps to the ground. McRae and Thomas gave me a tour of the heavy firefighting equipment kept in an enclosed garage behind their offices. A huge bulldozer sat on a tractor-trailer occupying most of the space, ready to go to work in an instant. The equipment was meticulously maintained and looked brand new, but McRae said, “The truck is old but can move in a hurry when needed.”

I made a few photos and decided I had taken up enough of their time. I took one more look up at the tower and thanked the two for their hospitality. On the way home, I thought about the two guys manning the ranger station and what a pleasure it is to be around folks who are dedicated to their jobs. Plus, I could check off one more item on my wish list: I had climbed a fire lookout tower.  PS