Walls can’t talk. Except for creaks, neither can rough-hewn floorboards or unscreened windows. Too bad, because their stories would describe a life primitive in comparison to ours. A life without air conditioning, indoor plumbing, electricity. A life where large families were the norm, as was burying a child or two.

A life where women stayed home. A life that fascinates for its simplicity and hardship, considering how complicated and automated ours have become.

These lives may, after all, speak best through their homes.

A Village Grew Around It

Shaw House sits, stoically, on a downtown Southern Pines corner within sight of a bank, a pub, a gas station, a gym and a Mexican restaurant — futuristic anachronisms, given its weathered boards and sloping porch. The date on one of two massive sandstone chimneys reads 1842, although the house itself was constructed in 1820 by Charles Shaw, a first-generation Scottish settler, on 2,500 acres of farmland. Perhaps the later date reflects addition of the porch and “travelers’ room,” usually with a separate entrance, occupied by itinerant preachers or craftsmen.

Water was drawn from a well. Houses of this era lacked kitchens; food preparation took place in an outbuilding distant enough so the inevitable fire would spare living quarters.

Step through the front door into a dim antithesis of 21st century bright-and-beautiful homes. Windows are small, unscreened and low-set — some shaded from blazing summer sunlight by the front porch. Walls, like floors, are random-width pine boards weathered gray, with the occasional decorative beadboard or faded green paint. Floors slant noticeably toward the doorsills. Low tables and chairs accommodated people of smaller stature, but no one seems to know why ceilings soar.

Obviously, utility was the architect here, yet few provisions were made for Shaw’s children. When not working the fields, they must have gathered in the “greeting” room just inside the front door. The dining area also seems cramped for that brood, as does the parlor. During winter months, perhaps they drew close to one of three fireplaces to finish their lessons. Since the house has but a single designated bedroom, the eight surviving siblings (two died in infancy, two encamped during the Civil War) must have slept in the narrow loft with angled ceilings, a tiny window and no insulation.

Imagine the heat, the insects.

Yet this dwelling housed a family of substance, ambition. In 1887, son Charles “Squire” Shaw became Southern Pines’ first mayor. The house remained in Shaw family ownership until acquired by the Moore County Historical Association in 1946. Period furnishings were hunted down, climate controls installed, a kitchen added. The house became a museum, a tea room and headquarters for the MCHA.

The Shaws peer down on the upgrades from photo portraits. The men appear quite nice-looking with thick silver hair, but the women . . . a bit frumpy. Obviously, smiles were frowned upon.

All well and good, though no re-enactment could replace the musty aroma, the passage of time, and the aura that cannot be synthesized.

Two hundred years and still standing, quite a feat considering how many dwellings have perished in the interim. Sad that COVID-19 canceled your party — but it had no effect on your historical clout.

Bryant House, on a knoll past McLendon’s Creek in Carthage, surrounded by ancient sycamores and enormous crape myrtles, has a wistful Andrew Wyeth quality in silhouette and hue. Yet on this milestone occasion it stands tall and well-preserved, like a silver-haired matriarch unbowed by the decades.

Joel McLendon built the adjacent one-room cabin, known as McLendon’s Place, in the mid-1700s, selling it to Robert Graham in 1787. Graham’s daughter married Michael Bryant. Their son James inherited the cabin, purchased surrounding land, married and constructed a homestead. This visionary’s project, completed in 1820, suggests the input of an experienced carpenter, with an eye to architecture. Everything is even, plumb, squares up. Floors pass the rolling marble test. 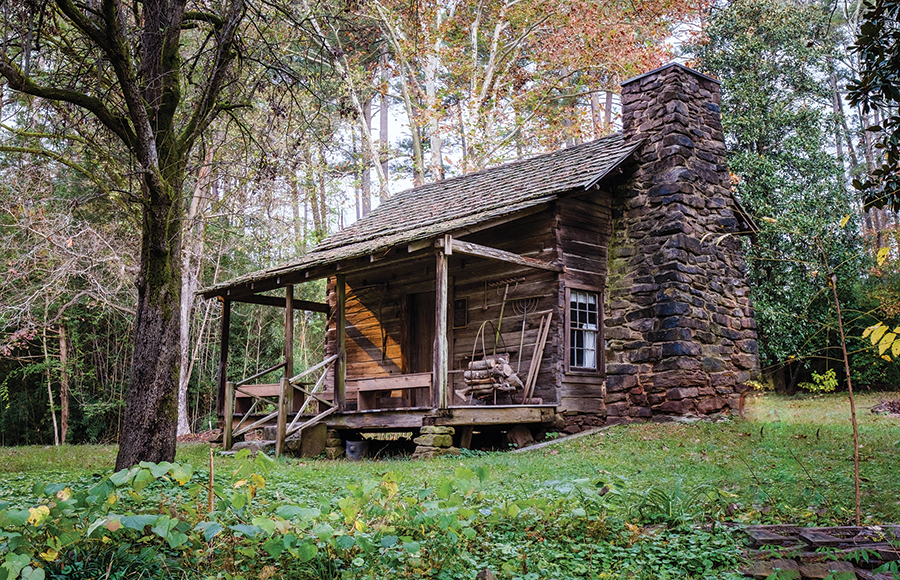 Wallboards are milled to match. The layout allows cross ventilation in the bedrooms (designated guest and granny) which, like the gathering area, are large — a good thing, since a successive generation of Bryants produced 13 children. They slept upstairs, divided into two rooms accessed by dangerously narrow, steep steps. Space under that staircase has been closed off as a bedroom closet, unusual in an era of “wardrobes,” armoires and pegs.

Even without running water, toilet facilities and a kitchen, the house was occupied well into the 20th century. It was gifted to MCHA and restored in 1970, including a fine collection of period furnishings, within guidelines set forth by the National Register of Historic Places.

Still, had home tours existed during Abraham Lincoln’s tenure, Bryant House would be a top pick.

Tracing genealogy can be like navigating a corn maze unless you’re a part of it, like Kaye Davis Brown, a sixth-generation daughter of the Bryant clan. Her father was one of Flossie Bryant Davis’ 13 children. Brown reels off a list of relatives — and rattles some skeletons, like Leandy Bryant’s love child, who bore her maiden name.

Brown describes how kids bathed in the creek in summertime, using smashed leaves as “soap.’’ During the winter a tub was placed near a fireplace, then surrounded by blankets draped over chairs for privacy. Half a dozen little ones later, the murky water got dumped outside. 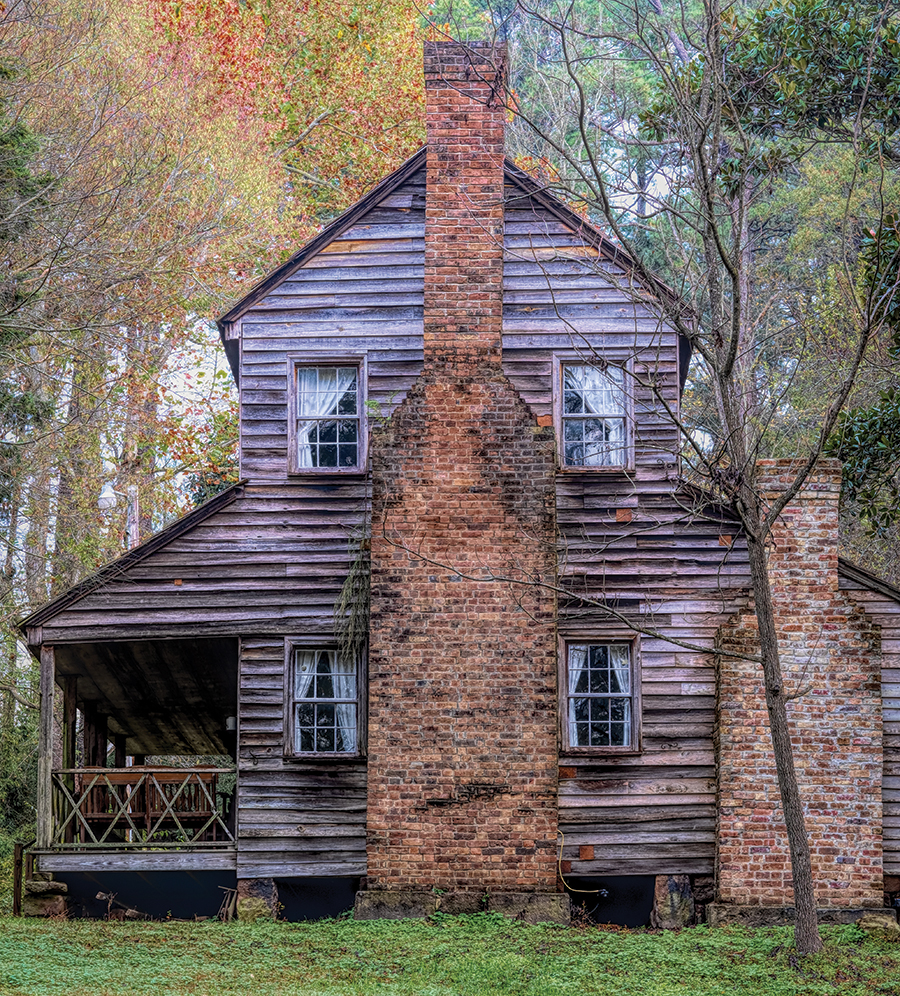 Brown points out a cross engraved over Mom and Pop’s bed, now blurred by white mold. She repeats the legend of how Flossie, an animal lover, coaxed her pet foal up that narrow staircase. Just don’t assume the bullet hole near the front door resulted from a military skirmish, as at the Alston House in the Horseshoe. Instead, blame neighborhood pranksters.

With minimal improvements, Bryant House was occupied until the 1940s. As a child, Brown remembers visiting cousins there. The grounds are beautifully kept; events draw crowds who enjoy the music, crafts and food — just not this year. A spring open house was postponed until December, then canceled, leaving only chilly ghosts to hear the tales, sing the songs and play simple games on the edge of this Wi-Fi world.

Have Cabin, Will Travel

The Shaw and Bryant homes have board walls constructed from heart pine. The Woman’s Exchange gift shop and café, a Pinehurst landmark, is a true whole-log cabin.

Naturally, it comes with a story — beginning with “Thanks, Mrs. Tufts” — from Exchange board President Barbara Summers.

The cabin was crafted without nails in 1810, several miles from Pinehurst at Ray’s Grist Mill. After the Civil War it was purchased by the Archibald McKenzie family as a kitchen. James Tufts, while developing the resort, was so charmed by this relic that he purchased it in 1895, had it disassembled log by log and moved near the village, where he could show it off to friends from New England.  He compensated the McKenzies by building them a new cookhouse.

At first, the cabin served as a museum. Its opening was reported in the Pinehurst Outlook in an 1898 story that spoke of a foot-long, iron key originating in a Fayetteville jail, a spinning wheel, candlesticks and deer antlers. The one-room cabin was later home to freed slaves Tom Cotton (a caddie on the resort’s golf courses) and his brother.

But all the while, Summers relates, Mary Emma Tufts had other ideas. Mrs. Tufts supported the Woman’s Exchange movement, begun in Philadelphia, in 1832. Gentlewomen who had fallen on hard times consigned handiwork in the shops, affording them not only financial aid but marketing skills toward future employment. Some exchanges opened tea rooms where forward-thinking women could socialize and share ideas. At its height, in the late 19th century, 100 Exchange shops attracted 16,000 consignees. 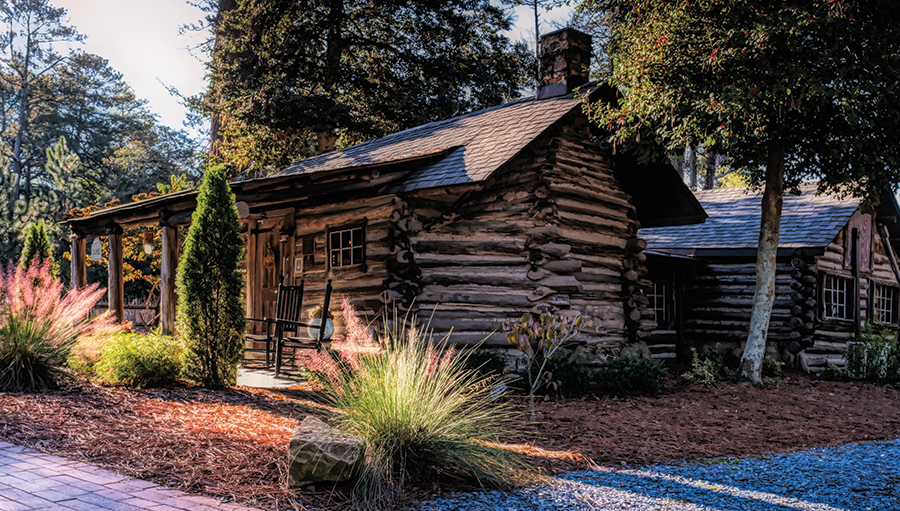 Mrs. Tufts died in 1922. In 1924, perhaps as a result of her influence, the cabin became an Exchange shop. Now, Summers continues, the pandemic has forced closing of four of the 20 remaining federation outlets but not the Azalea Road log cabin, which has spread in all directions from the original dark room with low door frames and a huge fireplace suitable for cooking. Sun streams in the showroom skylights; display cabinets have been painted white; and the café, usually full, specializes in soups, quiches and a turkey-avocado wrap. Artisan gifts and estate items are one-of-a-kind.

The garden surrounding the cabin has been replanted, heating and air conditioning improved, the computer system upgraded without changing the image of that solitary space and porch where, over the years, lives were led and business conducted.

Nothing succeeds like success. Leave it to the gals. And, pandemic notwithstanding, better show up early for a socially-distanced lunch.  PS