Story of a House: Rosewood in Bloom

Big ones. Brick ones.

Or, as Alice would say, “Curiouser and curiouser.”

Now Rosewood — named by first owners Mr. and Mrs. Robert Rose of Binghamton, New York — is in a third, maybe fourth, iteration designed for practicality (an L-shaped kitchen encompassing three distinct areas), with respect for the arts and crafts style (beams, dark woods), furnished respectfully in antiques, as in purchased, and heirlooms, as in inherited.

No less could be expected from Dr. Ellie Pack Marlow, an art history/design professional who, on a whim, left her job at a Manhattan auction house, enrolled in med school and now practices interventional radiology, primarily breast cancer procedures. Her husband, Cameron Marlow, is a validation engineer for a Maryland tech company. He ensures computers used to make vaccines (including COVID-19) meet FDA standards. 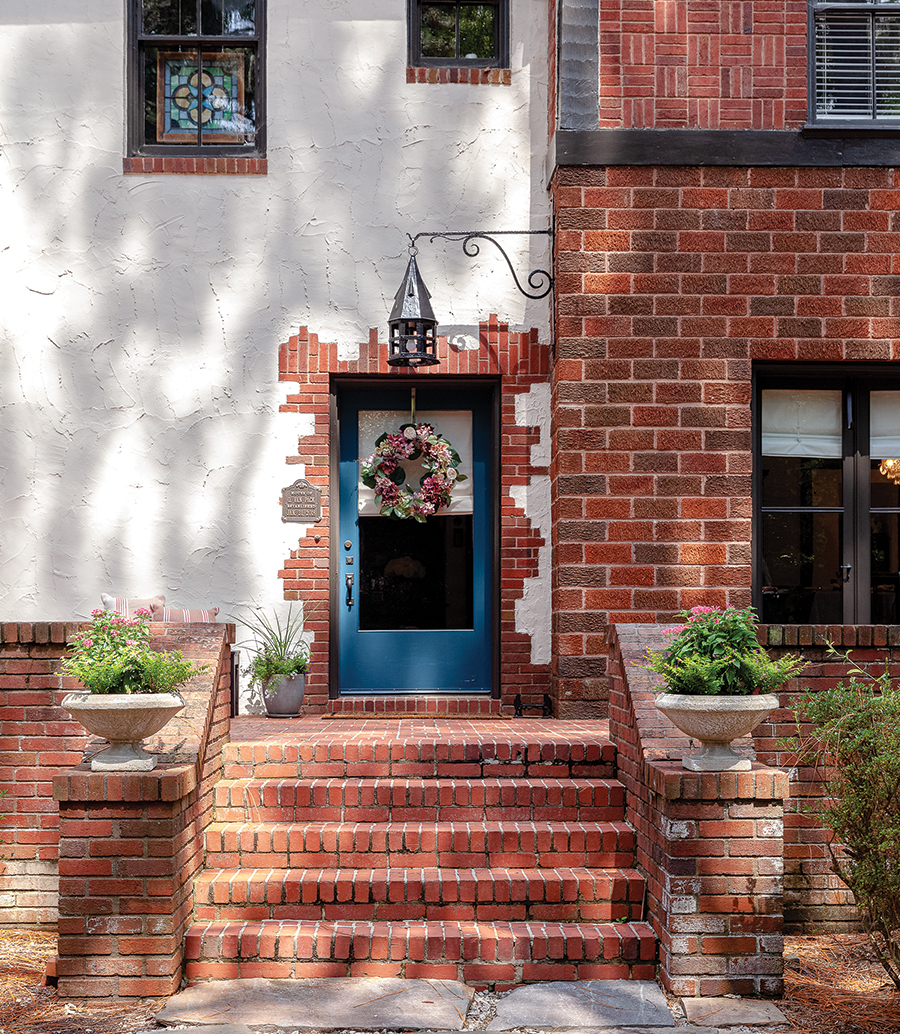 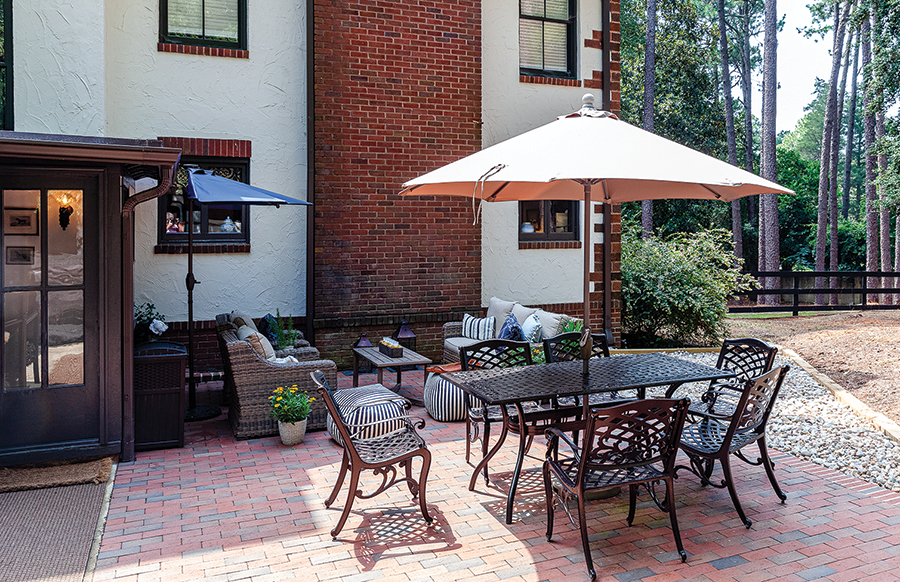 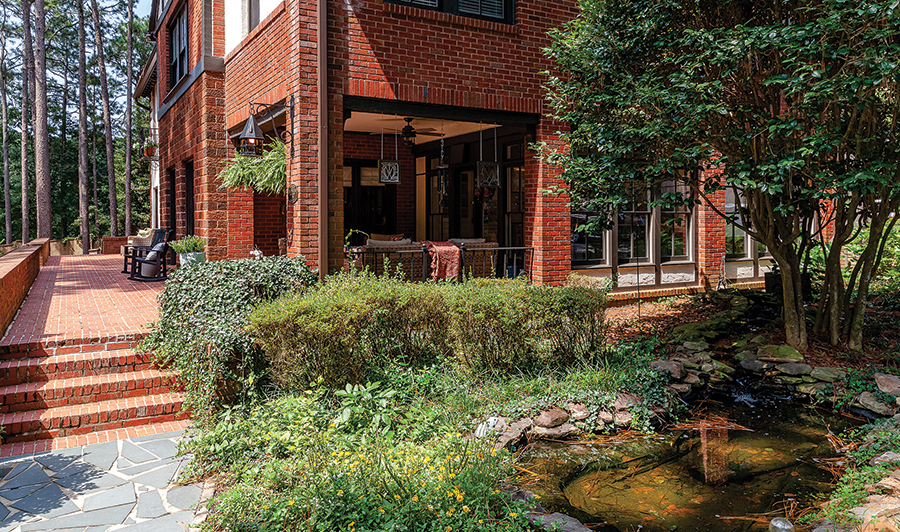 How this multi-faceted couple stumbled upon Rosewood reads like the first chapter in a happily-ever-after novella.

Ellie grew up on Manhattan’s Upper West Side, with time spent in New Jersey horse country. Cameron comes from Baltimore. Since he is able to work from home, they lived near Ellie’s medical practice, in Fayetteville. Southern Pines’ equestrian community was a draw; Ellie still rides, and until recently, kept a horse. First they looked at horse farms, but found nothing suitable. Then, driving around Weymouth, Cameron spotted the unusual three-story manse on South Valley Road.

Conveniently, Rosewood was for sale. Although the interior needed personalizing, major updates — including most systems — had been completed by previous owners. They purchased it in January 2018, moved into a rental house nearby, and commenced a sometimes bumpy renovation centered around a showplace kitchen, cobbled together from a sunken Carolina room and the smallish existing one.

“The kitchen is very important to us — the place we gather and spend time together,” Ellie says, remembering their first Thanksgiving/Christmas when the couple hosted 30. Many were houseguests. Rosewood, at about 5,000 square feet, has seven bedrooms, four full bathrooms, four outdoor seating areas (covered and uncovered) and a grassy yard. 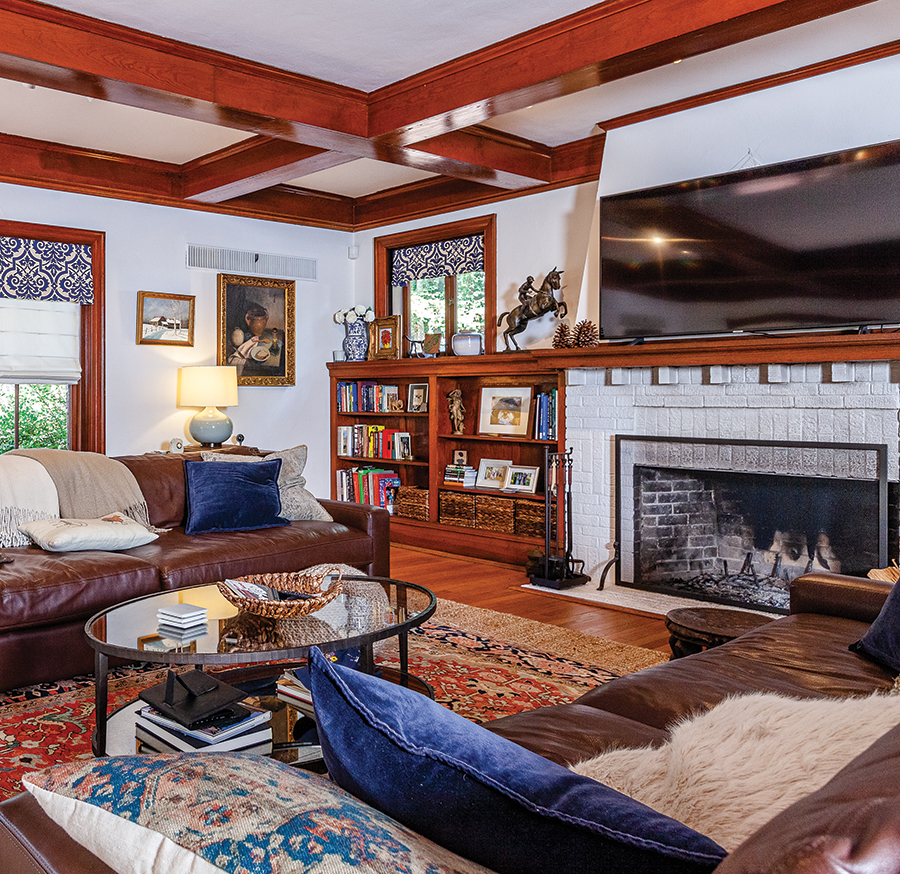 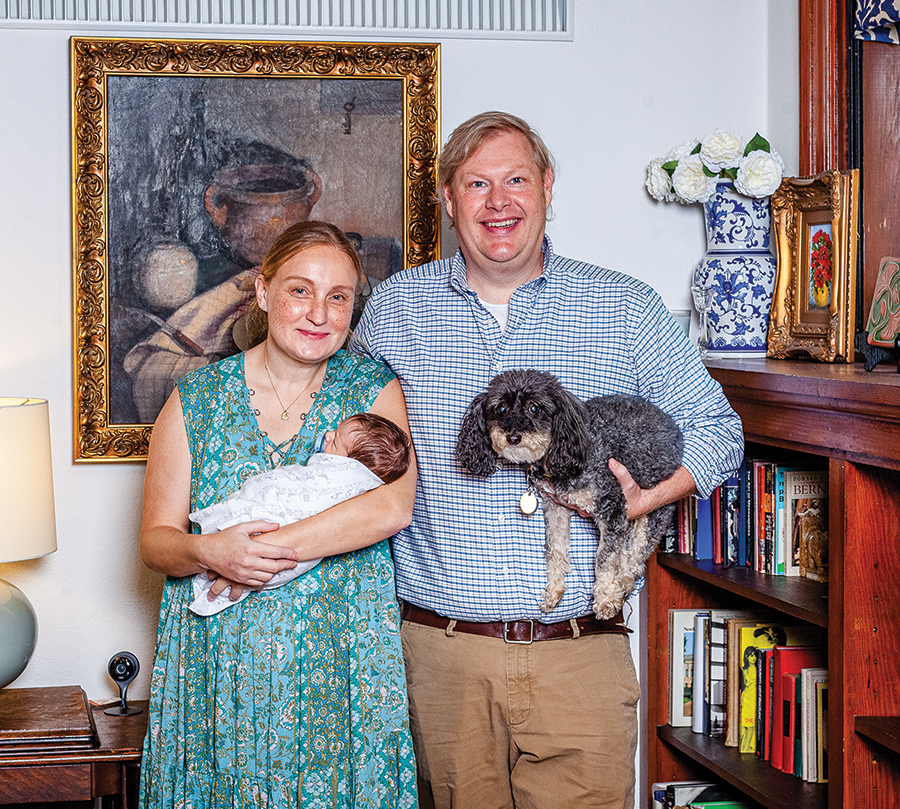 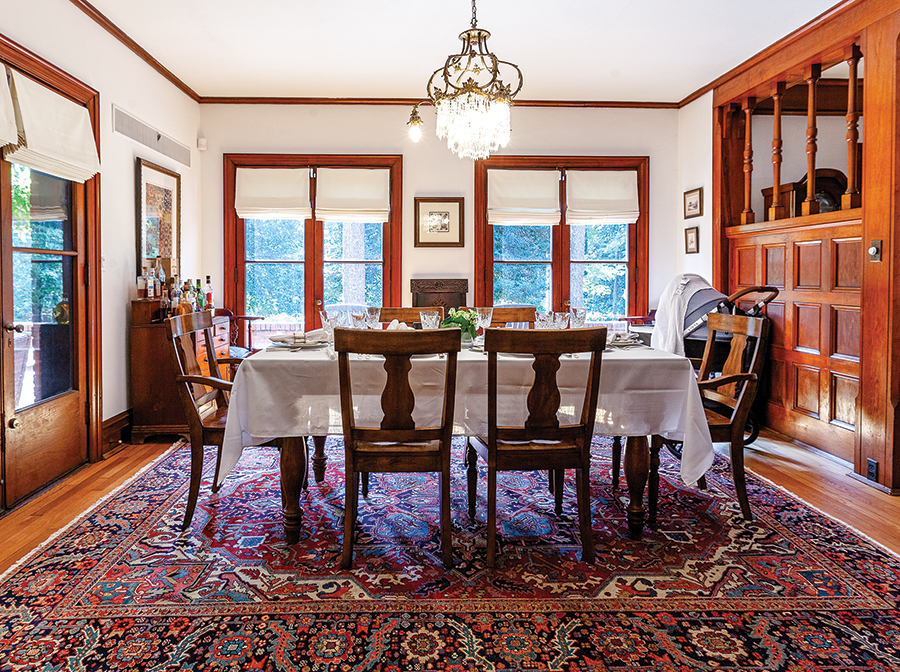 “To see the family sitting around was just wonderful,” she recalls.

This favorite room, because of the merger, has two separate prep areas, a butler’s pantry, a 13-foot white quartzite island/bar seating five, and a unique tin range hood custom-made in Mexico. Its air flow required an engineering feat, which Cameron explains enthusiastically. From the blown-glass lighting fixtures to splash-of-red tabletop appliances and statuesque faucet, every detail illustrates the couple’s attention to . . . detail.

“I always wanted to invite local chefs to do a demo here,” Cameron admits.

Interior designer Shelley Turner made this happen. “They needed a wet bar-coffee area that flowed into the butler’s pantry, along with a small counter with stools, for breakfast.” Chef Cameron wanted the island located so he could talk to guests while manning the massive six-burner gas range. No propane here. The Marlows brought natural gas to the neighborhood.

After the glowing all-white (except for an old “pie safe” cabinet) kitchen, the dining and living rooms feel clubby, suggesting hunt box, with dark woods and elongated chocolate brown leather sofas flanking (but not facing) a brick wood-burning fireplace with mantel-height bookcases extending in both directions. Two of Ellie’s saddles are positioned along the back of one sofa. A corner table is actually Ellie’s grandmother’s Singer treadle sewing machine. An exquisite inlaid dining room service table, a memoir from growing up in France, is a gift from Cameron’s mother, Monique Marlow, as is a framed Hermes silk scarf covered in hounds. 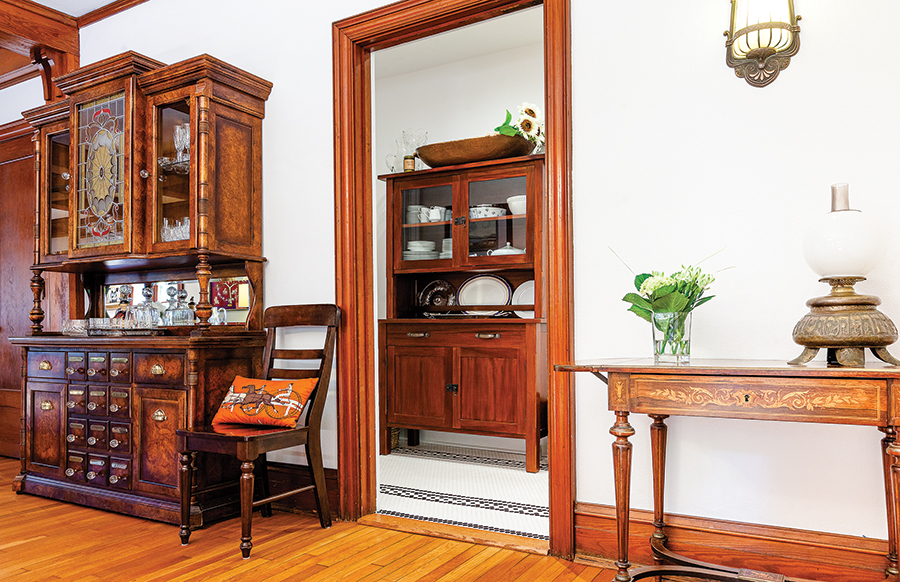 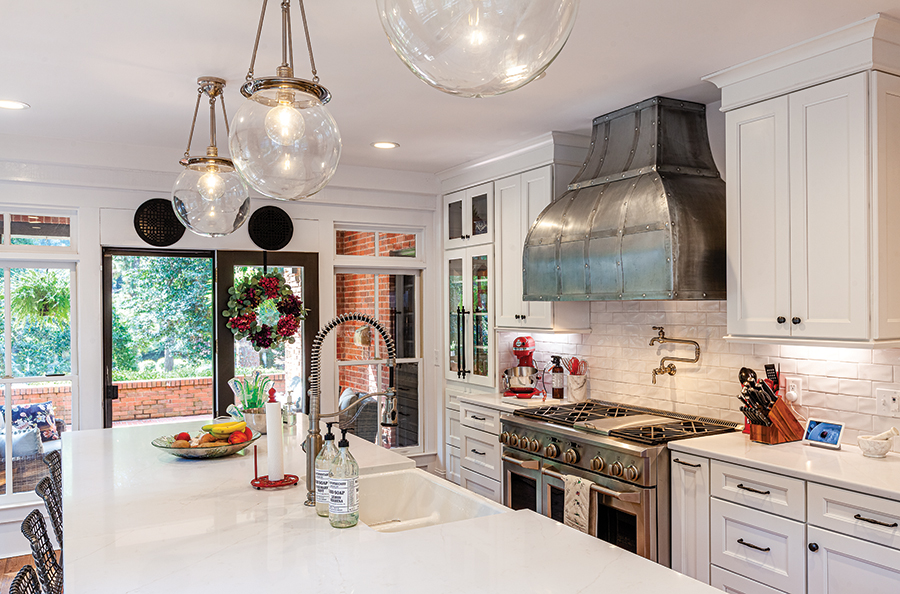 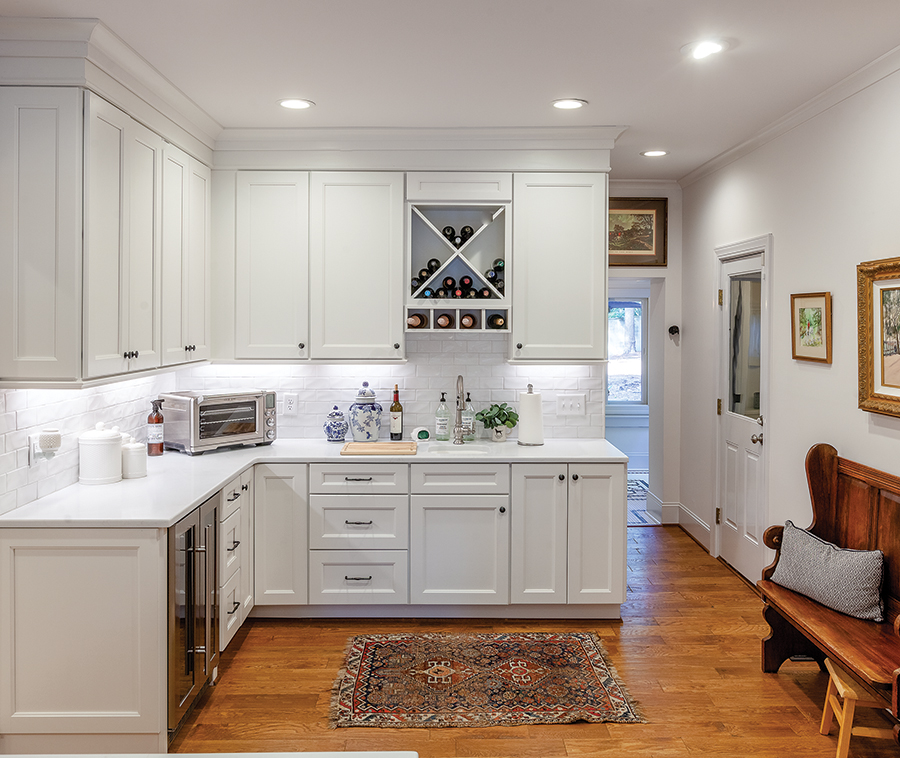 An art deco lily wall sconce over the inlaid table is something Ellie spotted on “American Pickers.” She contacted the seller and bought it.

No ancestral portraits, per se, but lots of equine art, some hanging from the original picture rails. Especially precious, a painting of windmills done by Cameron’s Dutch grandmother.

The center staircase, also in gleaming stained heart pine, joins a back staircase that connects third-floor servants’ rooms, now offices and guest quarters, to the kitchen. The mudroom floor is laid in small black and white hexagonal tiles characteristic of bygone hotel bathrooms; here the tiles spell out 1926 — Ellie’s way of dating what lies inside. These same tiles are used in a powder room and some bathrooms (with original clawfoot tubs), which have been modernized but not glamorized, which would clash with the era.

“Ellie has an incredible eye,” her husband notes.

A new gas boiler was installed to service the white iron radiators, which Ellie appreciates for decorative period value. A guest bathroom with a flat wall-mounted radiator won second place for Turner in the ASID category for bathrooms in a historic house. 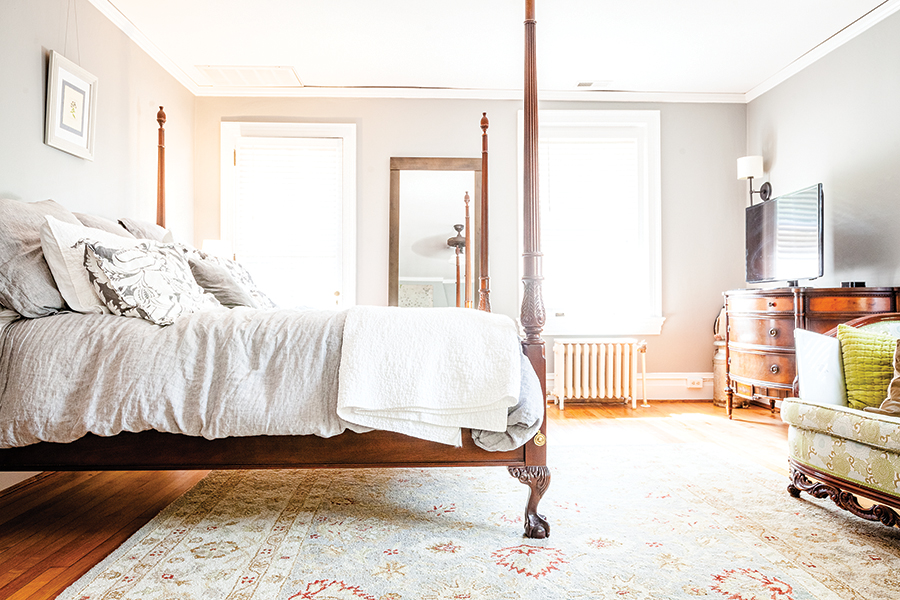 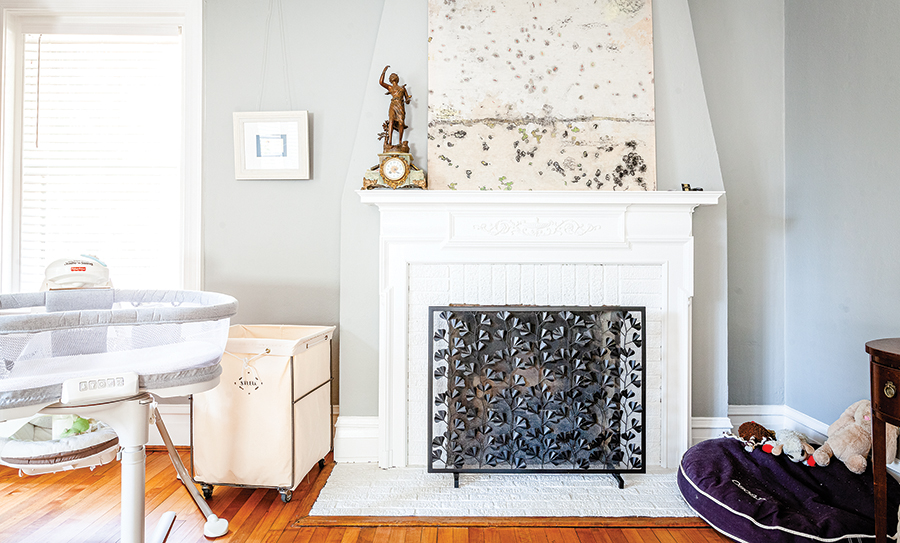 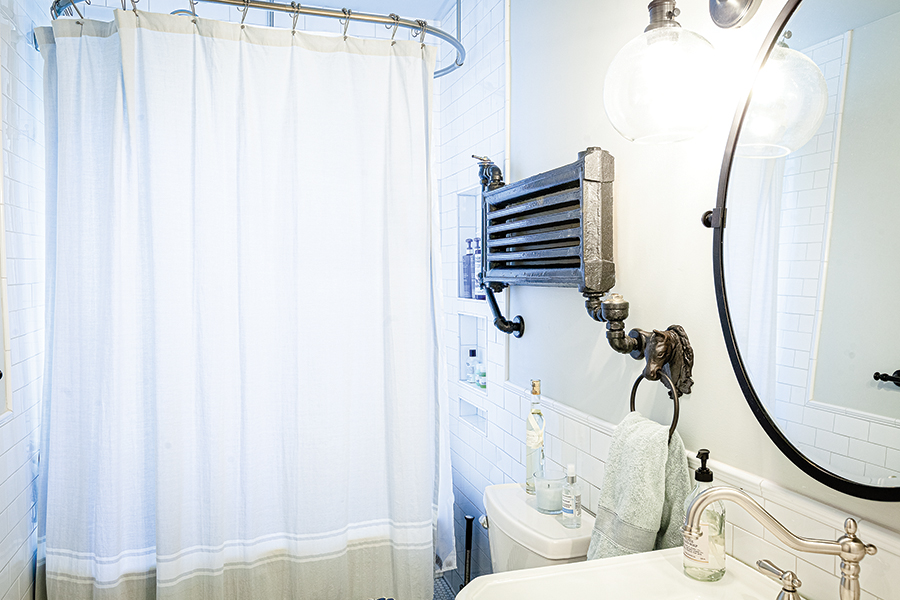 Wall tints in the second and third floor bedrooms (some now offices) are pale dusty greens, grays and sand. “Ellie wanted the space to be airy, calming, timeless,” Turner explains. “She wanted to maintain the integrity of the house.” A pinch of whimsy is allowed, as in the powder room with hundreds of tiny horses and riders against a striped wallpaper. Also calming: a rock-rimmed gurgling pond beside the covered porch, a pleasant place for morning coffee or evening wine.

Summation: Everything old is new again, which pleases Ellie. And Cameron got his culinary stage.

By any other name Rosewood smells as sweet. A plaque beside the front door announces House of O. Van Pack, Established Jan. 31, 2018. O is for Oscar, a spry 14-year-old poodle mix who has been with Ellie since med school. Inside, scattered amid the antiques, are boxes holding baby equipment. Within a year, rooms furnished in leather and heart pine will be cordoned by gates. Those pristine kitchen cabinets will require safety latches. A babycam already transmits images, while a motorized bassinet rocks to and fro. Because in July, a sunny corner bedroom became a nursery, welcoming this old estate’s new heir: Emerson Cole Marlow.