The story of this house starts like many others: Retired executives Linda and Don Branch — well-traveled golfers — fall in love with Moore County, secure a lot in a gated community, build a showplace home, make friends and live happily ever after.

Location, location, location: Linda drove through the gates of Forest Creek and said, “I’m done. I feel both elevated and relaxed. Don’t try to sell me on anything else.”

The architecture: faintly chateau, with pinkish bricks resulting from a white frosting, designed by an architect whose “find” was a fluke.

The foyer: a two-story atrium with balcony, adorned by stained glass panels that diffuse and tint sunlight.

The layout: upstairs, a private two-bedroom apartment for golfing guests. 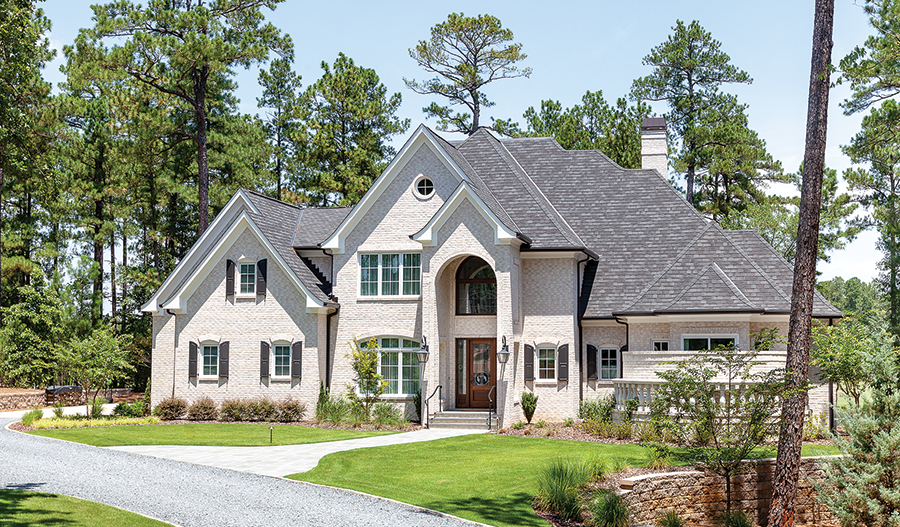 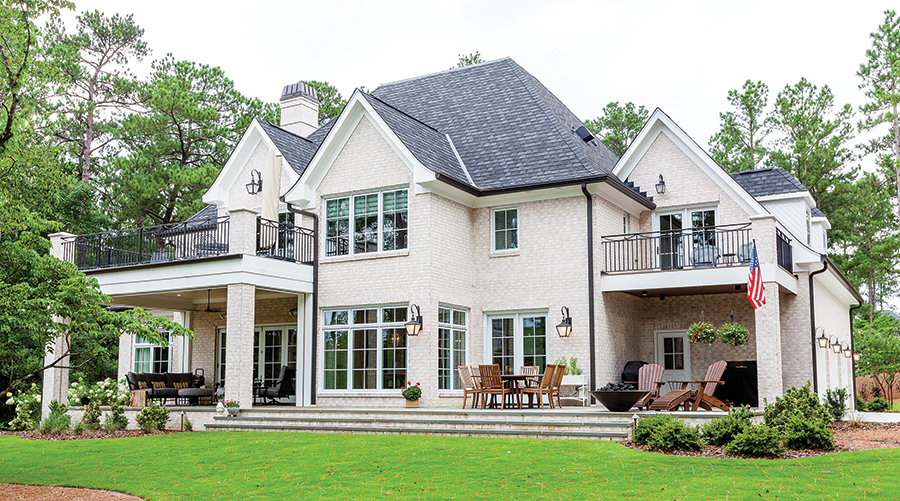 Unique: a high-walled private garden with shower protruding from the front — not back or side — façade.

Convenience: a sweet little elevator tucked beside the staircase.

Memorabilia: a piece of the Berlin Wall, Post-it Notes and a Cuban cigar press as décor artifacts. Who else does this?

Last but most unusual: an adjoining lot that they purchased as a habitat for red pileated woodpeckers. 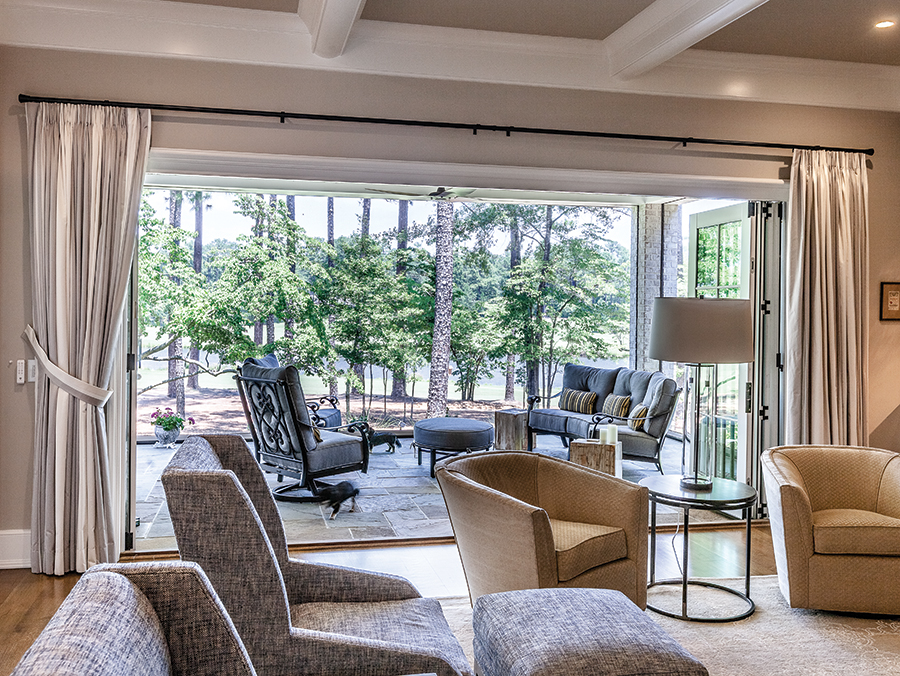 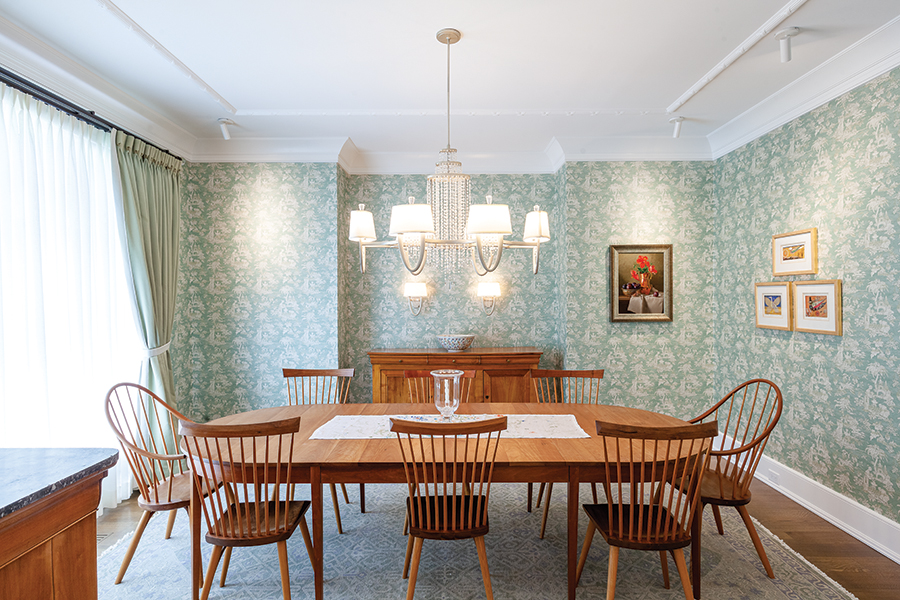 Linda and Don were ready to retire after 37-year careers with 3M. Living in Brussels, Paris and elsewhere made them crave a subtle European flair played out against minimalist precepts. The ornate retro-green handpainted Asian wallpaper in the dining room, located just beyond the foyer, comes from London; in the same room, a Louis Phillipe breakfront occupies a niche built to accommodate it. The American cherrywood table speaks Shaker simplicity, and plays against the chandelier and heavy tapestry drapes.

First impressions made by the stained glass stylized bird panels set into foyer windows hint at drama within.

Linda explains: “We wanted light but privacy, too, and pieces of color,” provided by the antique hand-blown glass. This feature was so important that architect Bill Hirsch traveled to Minnesota to see how the same panels had been installed in the house where they lived, enabling him to plan their removal and relocation.

How the Branches connected with Hirsch — pure serendipity.

Linda and Don had purchased a lot in Forest Creek for a permanent home rather than do the snowbird commute from Minnesota. They were living in Belgium at the time, making plans. By coincidence, Don found online Designing Your Perfect House, a best-seller by Hirsch. The book was just what they needed to refine their ideas. Lo and behold Hirsch, who has worked all over the world, lives in West End. 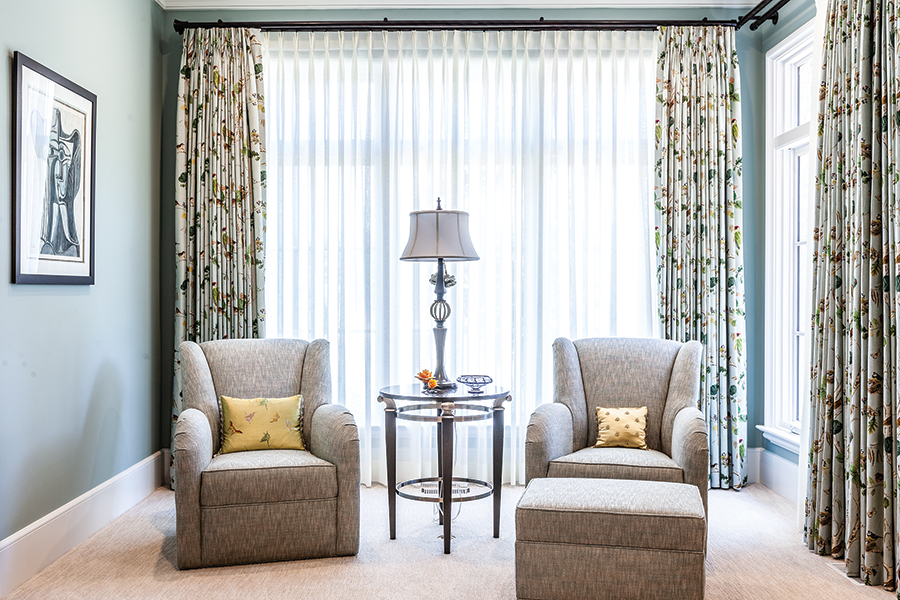 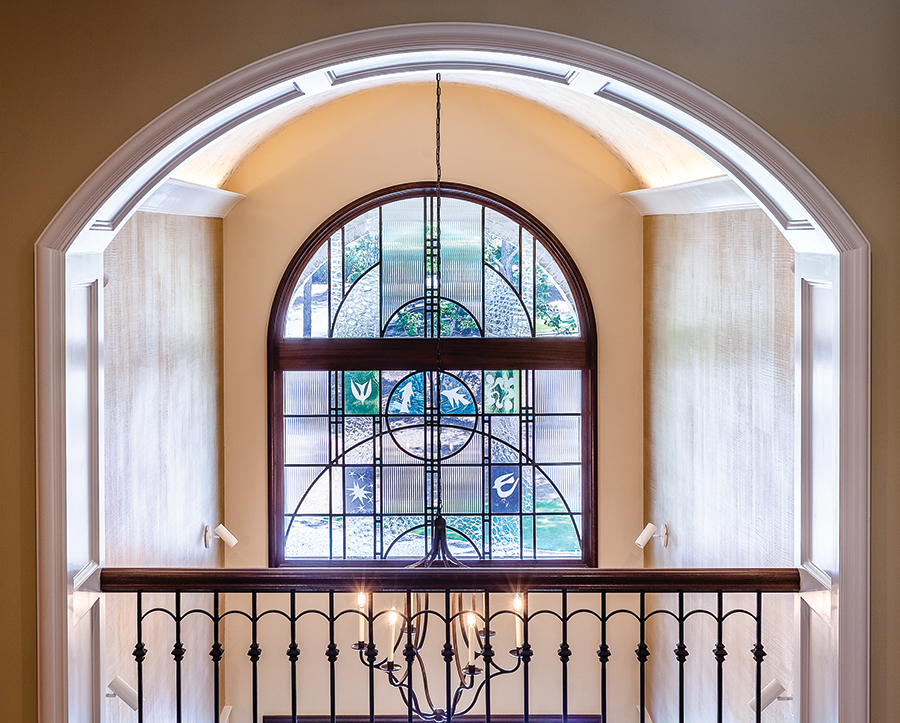 Not only did he understand their goals, but introduced Linda to Agnes Preston-Brame, an artist and interior designer from Budapest who lives in Greensboro. She added the European undertones Linda sought. “I really needed help. Because we’re eclectic I wanted someone to help me pull together what we had (with new purchases).”

The two women stormed the High Point Market, furnishing the entire house in less than a week.

The result is full of surprises.

Just inside the front door is a two-part powder room and, beyond that, the stunning dining room which, along with a passageway through a hall, leads into a mostly white kitchen of magnitude and placement that render it the main-floor hub. Linda and Don, both experienced multi-ethnic cooks, have separate black granite sinks, preparation and storage areas, burners on the range top.

“In our old house we kept stepping over each other,” Linda recalls.

At the end of the kitchen stands a small marble-topped breakfast table. “My grandfather was a pharmacist,” Don says. “This marble was part of the soda fountain (in his store). It gives us a sense of history.”

Remnants from trimming the marble slab were made into trivets.

A half wall separates the palatial kitchen from a seating area which, conforming to a popular trend, replaces a formal living room. Furnishings here are contemporary but not stark, some with Scandinavian lines. This carries forward a long-standing preference.

“Our first house had Stressless recliners,” Don says, of the Norwegian design similar to Eames, conceived in the 1930s. Don insisted on a wood-burning fireplace. Linda agreed, “If he promised to take care of it.”

The covered veranda beyond the kitchen is protected by motorized phantom screens that, at the push of a button, swish down without poles interrupting a view of the pond. 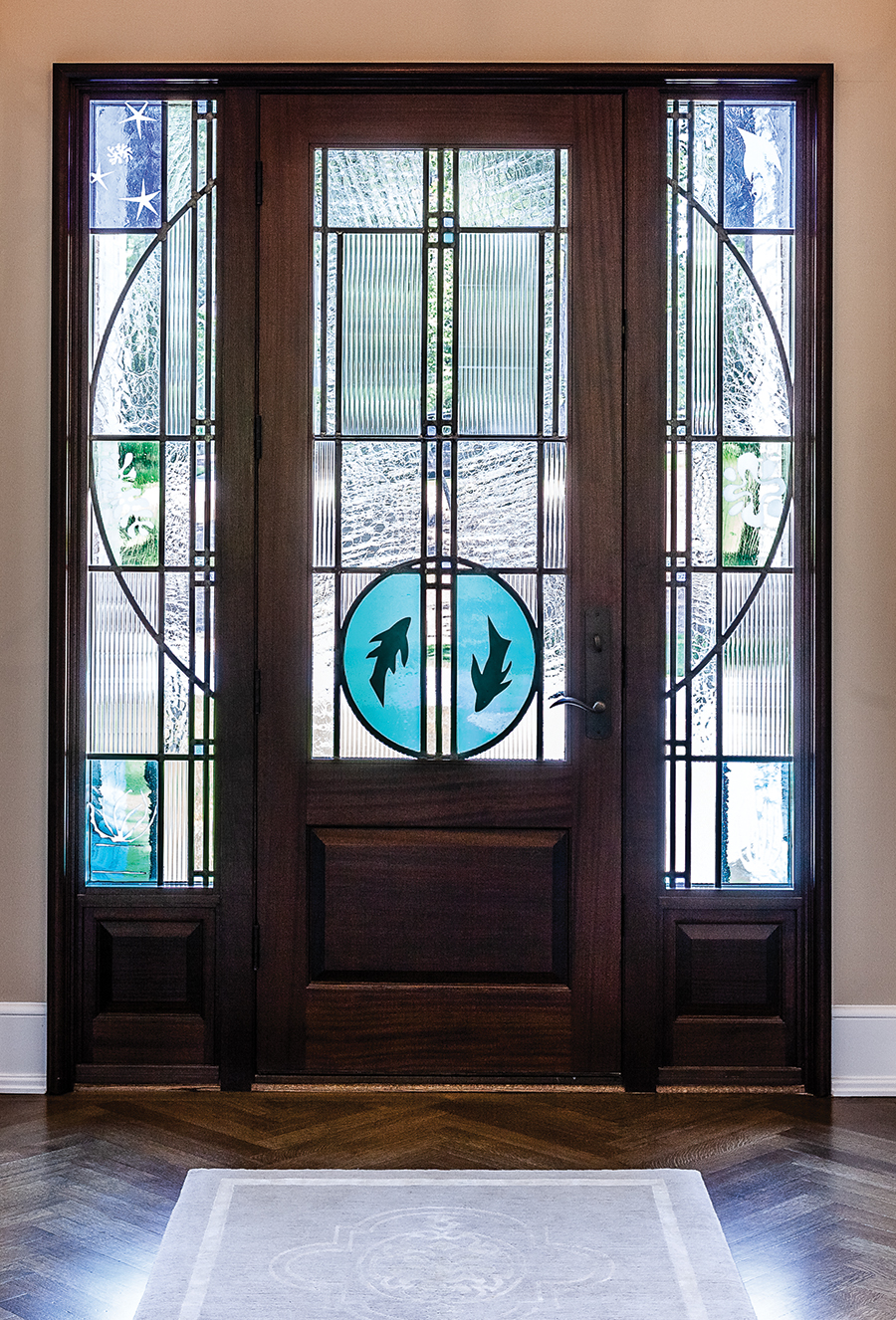 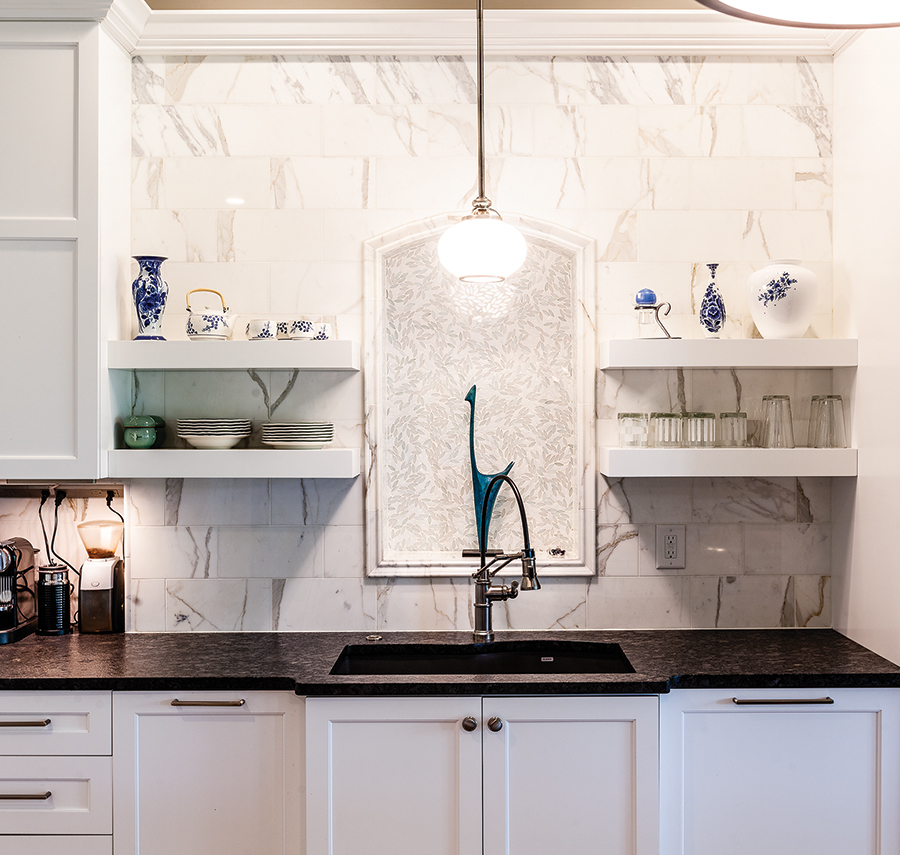 The main floor master suite with seating nook is a slightly more traditional foray in soft retro green (similar to the dining room, which Linda finds restful) flowing around a massive sleigh bed in dark woods. A hallway of closets leads to the bathroom, with a glass-enclosed shower that opens directly into the secret garden enclosing another shower. High walls offer privacy but no barrier to falling leaves and pine needles.

Don and Linda first experienced this bathing arrangement on their honeymoon, in the Virgin Islands. Hirsch had seen something similar in Bali. Other luxury homes have outdoor showers for muddy kids, sweaty golfers and equestrians but not as a bathroom extension, with garden. Its placement allows for Linda or Don, still lathered up, to hear guests arriving at the front door.

Guest apartments, usually second floor or over a free-standing garage, for children and grandchildren, are common features in this echelon of 6,000-plus square foot homes, many built, as was this one, by Will Huntley. Since Linda and Don have neither, they devised The Locker Room: closed-off quarters with two bedrooms (one, a delightfully feminine lavender modifying the clubby masculinity elsewhere), workout equipment, a common room, bathrooms, kitchenette/dining area and, of all things, golf lockers where frequent guests can leave equipment, clothing, toiletries. A few friends have earned a locker nameplate. “We’ve had as many as 100 in a year,” Linda says. 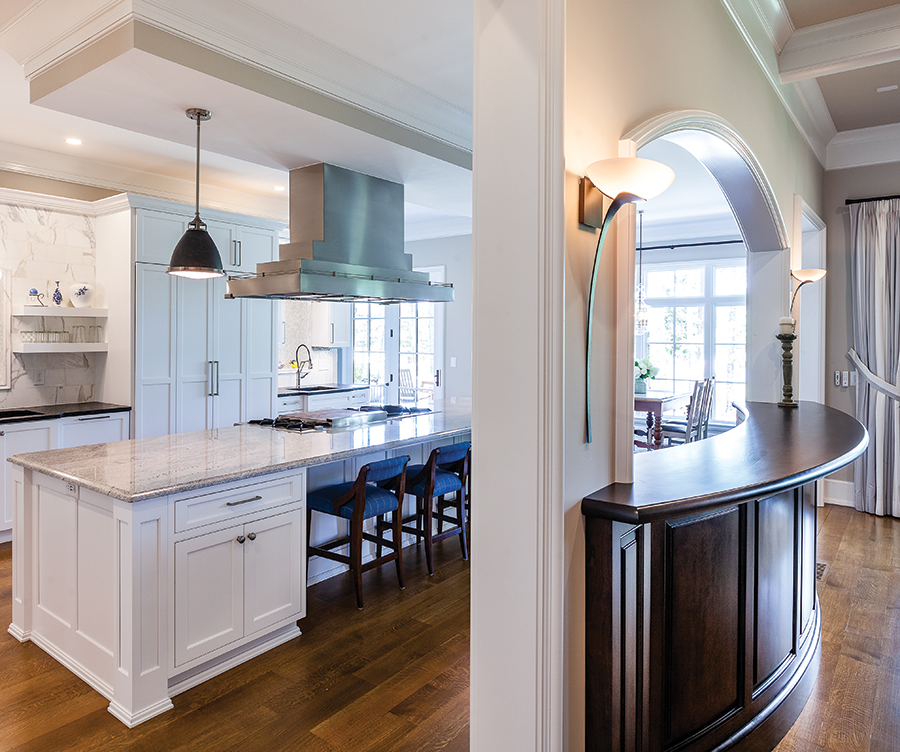 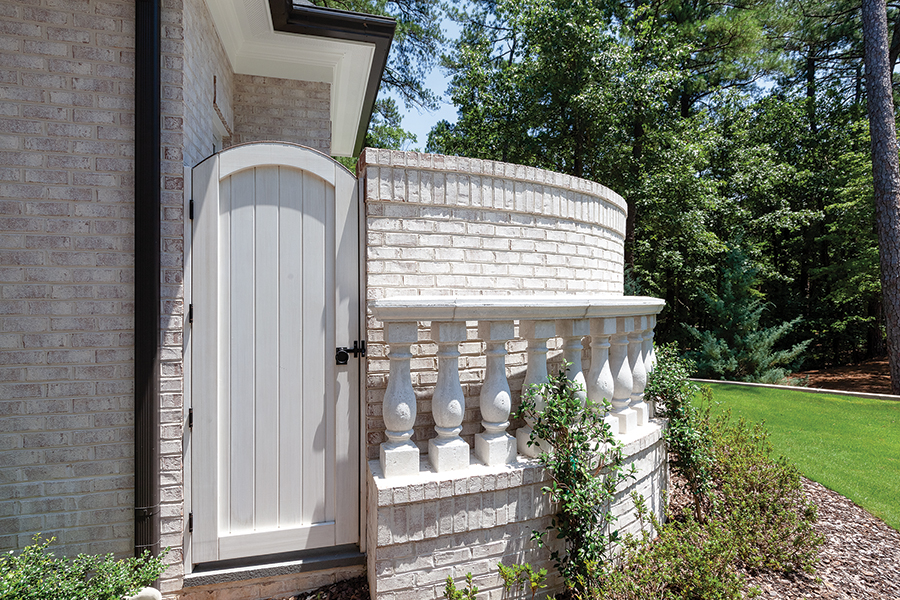 Even Bella, their tiny Papillon mix, has her own gated condo behind the kitchen for mealtime and quiet snoozes.

Although most of their furnishings reflect High Point rather than heirloom, Linda has incorporated personal items, including a painting of herself by a European artist friend, which hangs on the balcony overlooking the atrium-foyer: The scarf she wears in the stylized action portrait is her real-life favorite; the MiniCooper detail reminds her of when a similar car ran over her foot. Across from it hangs Don’s choice, an enlarged Wine Spectator cover by Andy Powell.

Both Don and Linda grew up in less-impressive surroundings, Linda in a split-level ranch, Don in several homes he describes as decidedly middle class. This house fulfills Linda’s requirement for a happy retirement: a beautiful home and time for travel. In February, instead of running away to Florida or the Caribbean, they spent several weeks in Vietnam. 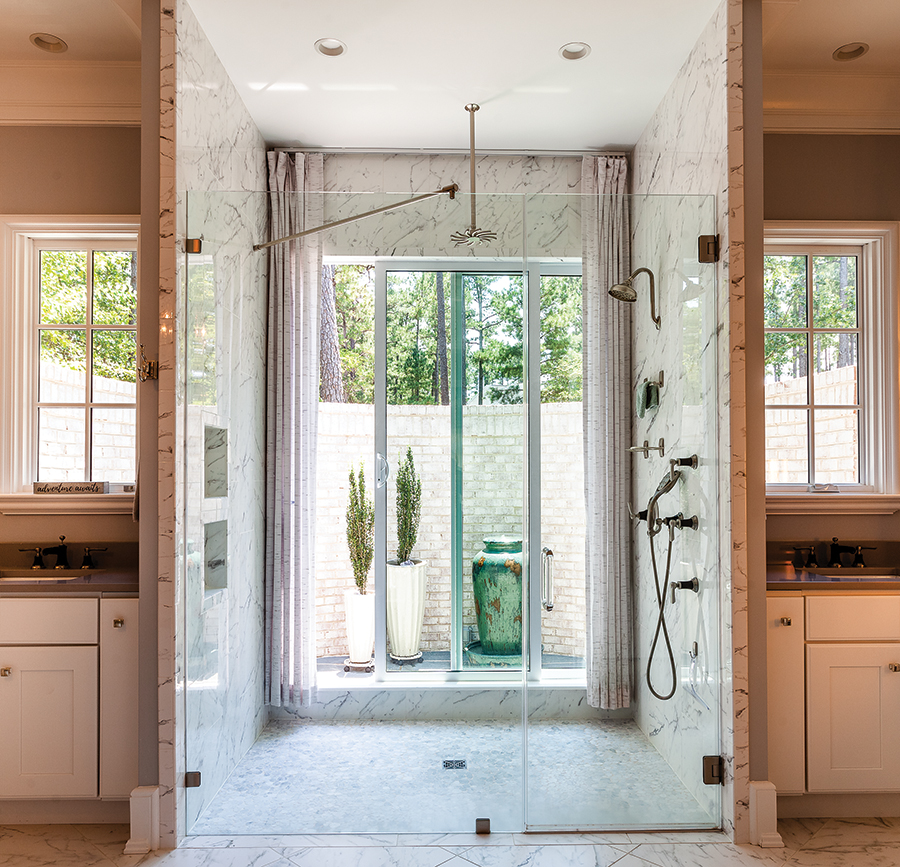 Linda and Don’s longstanding method of selecting and furnishing their homes, including paintings from artists met along the way, worked.

“When we agree on something we just do it,” Linda explains. “So far, all our decisions have been good.” Especially this one, which they call “rightsizing,” since it is slightly larger than their former residence.

Techie Don, after settling a few issues with Electra, agrees. “From the time we married, home and house were very important to us. People who walk in say it’s comfortable. That’s how we planned it, intuitively, to be practical for the way we live.”

His final thought represents the combined efforts of architect, builder and occupants.

“This really is our dream home.”  PS