Twenty years ago, Dr. Russell and Ann McAllister decided to downsize from a 4,000- square-foot home in Durham. Their children were grown. Russell, a cardiologist, anticipated retirement. Golf wasn’t a factor. So what did they do? Purchase an empty and neglected 6,000-square-foot manor house on 5 acres with two tennis courts and a 20-by-40-foot pool, built in Pinehurst, circa 1916, for U.S. Ambassador to the United Kingdom, Walter Hines Page.

Page, appointed by Woodrow Wilson, served during World War I. His father, Francis Page, had made a fortune in logging and construction. The elder Page is credited with founding Cary and Aberdeen. Son Walter, who followed more intellectual pursuits (journalism, teaching, publishing), shifted his attention and residence to England, planning to return, eventually, as a gentleman farmer. Illness brought him back to Pinehurst, where died in 1918, at 63, without fully occupying the stately residence called Garran Hall.

The McAllisters’ acquisition of the Georgian manor, renamed Hollycrest, spins an unlikely tale.

Ann: “A friend asked me to come down from Chapel Hill with her to help find a house in the Sandhills. We looked through some brochures.” One caught Ann’s eye. The agent offered a showing. “It had been vacant for 16 years. As we came up the drive it looked like a haunted nursing home.”

By chance, the house was open. They tiptoed in.

“I had a moment,” Ann recalls. She saw beyond the cobwebs to the grounds, the scope and isolation. “I adore magnolias,” which were plentiful. She faces challenges without fear.

Russell: “I was at choir practice when Ann called to say she had found what she always wanted. And all those years I thought (that something) was me.” Instead, a brick masterpiece, simple and dignified, built longitudinally one room deep, with a wing at each end.

This faded beauty oozed potential. Ann possessed expertise; she had renovated a historic home in Kentucky, also trained as a docent at The Hermitage, President Andrew Jackson’s residence in Nashville, Tennessee.

Nevertheless, Russell — also a history buff — came down, took one look and uttered, tapping his forehead, “She needs help.”

She got the practical kind from the architect who designed their Durham home. But interiors executed in a genteel Southern mode are Ann’s alone.

Once termite damage had been rectified and the skeleton exposed, the crew got to work on making the house 21st century livable: Enlarge the main floor master suite and bathrooms, create a kitchen (original in the basement, which now houses a wine cellar), install new systems (five-zone AC), add two staircases and enough paneling, coffers and moldings that, if laid end to end, would reach W.H. Page’s grave in Aberdeen.

They were able to save all seven carved mantels, most doors and some oak flooring, which was lifted, repaired and relaid. Workmen ran into trouble when replacing the front portico, deemed wrong for the era. During its removal, bricks fell off the house front. The hunt for matching ones took three months.

The blush pink salon — nearly 40 feet long, with tall bare windows parading down both sides — remained intact, divided into conversation areas by white sofas, chairs, rugs and tables. One end is anchored by a fireplace, the other by a 15th century millefleurs tapestry reproduction, where the background is composed of tiny flowers.

Given the dimensions, Russell envisioned it a ballroom.

Less imposing on a quiet evening are several sitting rooms, including one adjacent to the kitchen, also Ann’s Blue Room displaying her Delft collections, notably tiles framing the fireplace. Part of Russell’s second-floor office doubles as the TV room. Her favorite is the library just off the kitchen, where a round ottoman upholstered in a fabric featuring life-sized cats dominates floorspace.

“Playfulness,” Ann calls it. “Every room needs a laugh.”

Laughing from the top of a highboy is her collection of nutcrackers brought back from a year in Switzerland. Russell identifies the odd painted wooden benches on the veranda and by the front door as joggling boards, a low country craft.

“This is where you sit with your girlfriend and ‘joggle’ closer and closer.”

How refreshing to see serious antiques placed beside a cat fabric and pig-shaped leather footstool. In the foyer Ann again accomplished this with her mother-in-law’s Governor Winthrop-style desk a few feet from a low rack draped with a velvet jester’s cap, a French gendarme’s hat and assorted headgear collected on their travels. 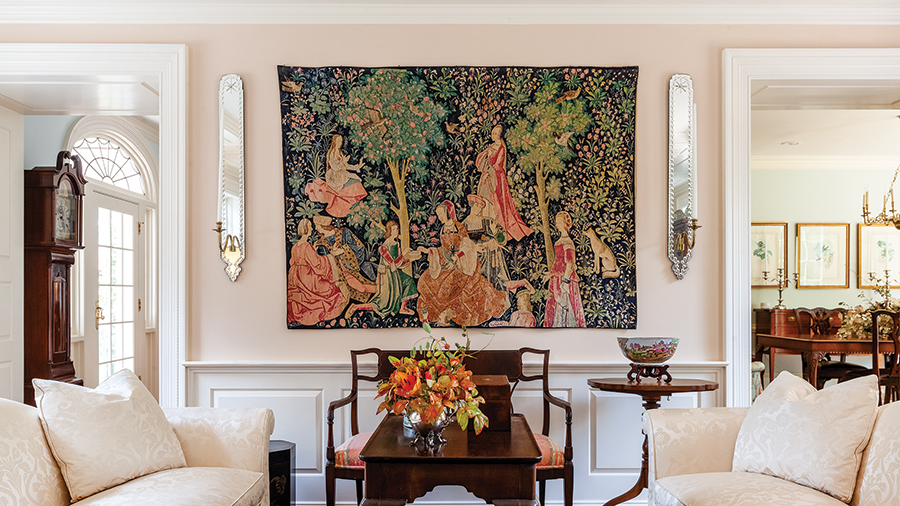 Ann’s fabric/wallpaper preferences lean toward chinoiserie patterns with flowers and birds of paradise, popular in Europe when Asian trade routes opened during the 17th century. Some have a silky sheen. Her method: Haunt fine fabric shops in Charleston, Atlanta and Durham, purveyors of brands like Scalamandre and Brunschwig & Fils, for finds and bargains. When something catches her eye, “I buy it, a lot, and build the room around it.”

The gap between purchase and use can be years. Other times, the fabric completes a theme, as in the upstairs nursery. Here, a medieval tone is set by a brass canopied crib, fit for a prince, first used by the McAllister children, now by the grandchildren. 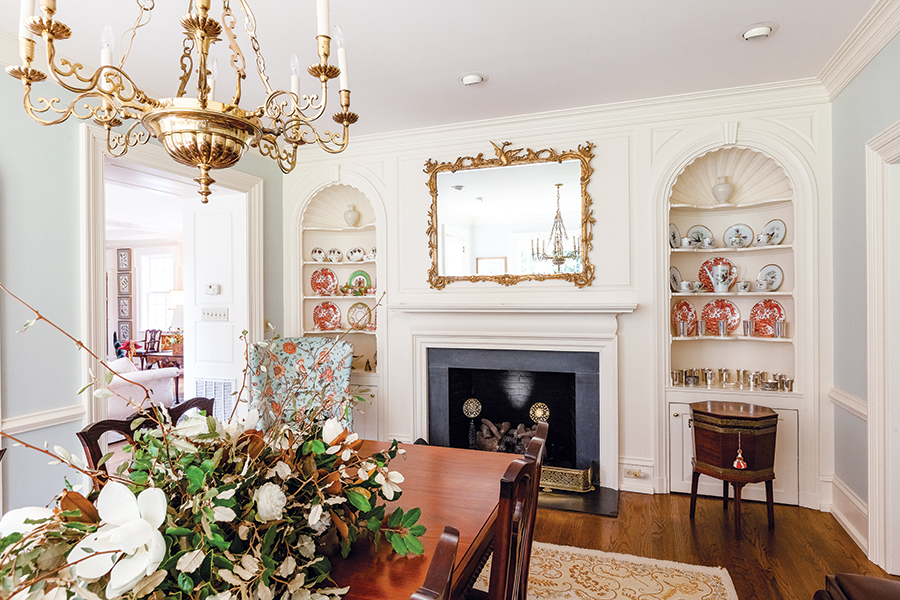 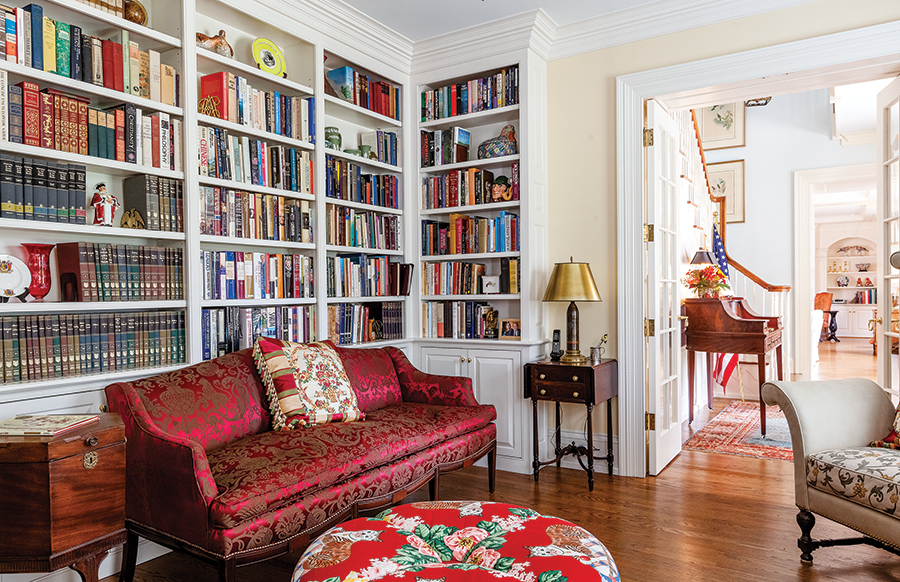 Furniture wasn’t a problem. Russell descends from an old Virginia family, Ann from a Tennessee counterpart. Heirlooms aplenty trickled down, including a Biedermeier chest, many desks, side tables, campaign and other chairs, a bachelor’s chest, armoires, classic dining room pieces and, of course, ancestral portraits: Russell’s kin, a handsome assistant surgeon general of the Confederate Army, shares a wall with his stern-looking wife. “When you have enough relatives who die on both sides you can pull it together,” Ann learned.

Her kitchen, created from scratch, pushes the envelope in another direction. The toile wallpaper in giant black-on-white figures suggests a formality not reflected in matte black granite countertops, preferred for their well-worn look. The low storage island doubles as a dinette table, and two farm sinks (one in an open butler’s pantry) help when the McAllisters entertain. The wall of windows over the main sink faces an expanse of grass bordered by elder magnolias and American plane trees, with pool and tennis courts beyond.

Indeed, Hollycrest qualifies as lodging for royalty. Elizabeth Demaine, who purchased the property in the 1940s, hosted the Queen of Thailand, a college friend, and her entourage there. Demaine, a foxhunter, changed the name to Hollycrest, adding stables and kennels — even an enclosure for peacocks, known to be guard birds.

Demaine’s favorite horse is buried on the property. 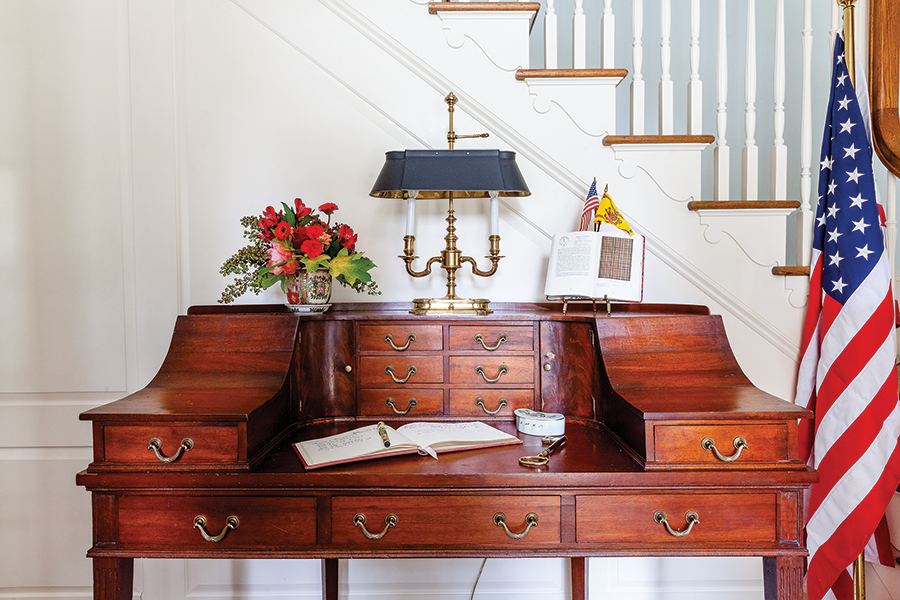 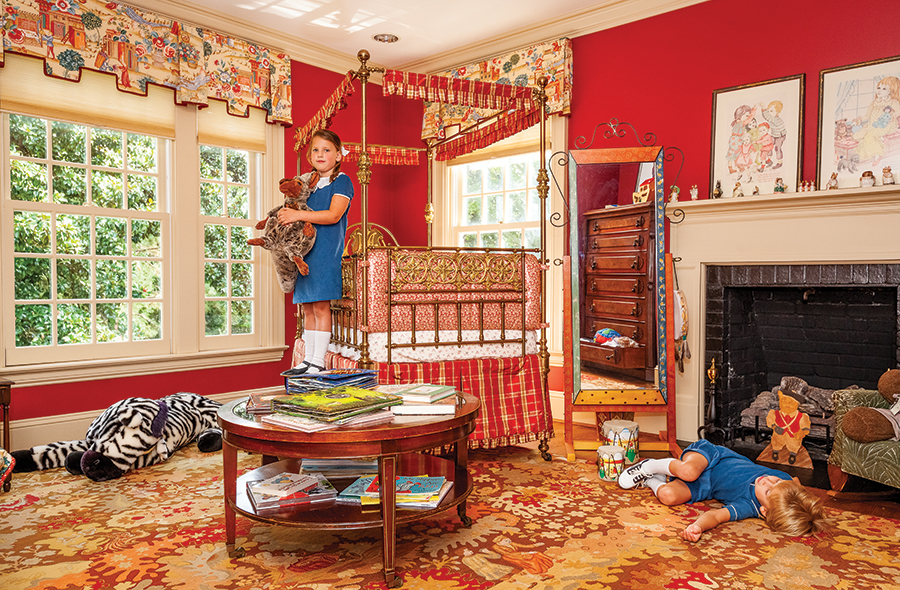 All things considered, the beauty of Hollycrest lies in the sum of its details: the old-fashioned robin’s egg blue and barely pink downstairs walls contrasting to dark, vivid teal and red upstairs, accomplished by first painting the surface black, then overlaying color. The Tennessee marble used for a powder room vanity. The original polished brass hinges and doorknobs. A narrow spiral staircase. Brick gateposts and a circular drive to match house proportions. Art purchased worldwide just because the collectors liked it. A secret coat closet, under the main staircase. A collection of tiny Hummel figurines. The handpainted folding screen in the dining room. Shelves of Southern literature and gardening books in Ann’s sitting room. A tiny refrigerator built into Russell’s office bookcase, containing his favorite beverages and the grandchildren’s.

Lucky grandchildren. Ann and Russell located a furnished “wee cottage” just tall enough to accommodate grade-schoolers. They arranged for its transportation, in toto, by sky crane, then secured it with a foundation.

Alice found no match in Wonderland.

Next up, lighting the tennis courts so the McAllister’s daughter, who played for Princeton University, can teach her children. 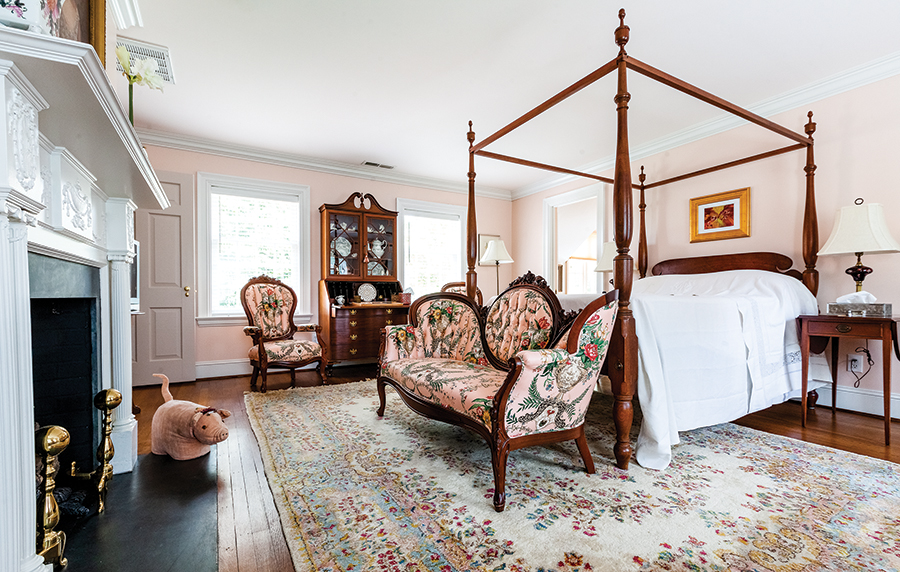 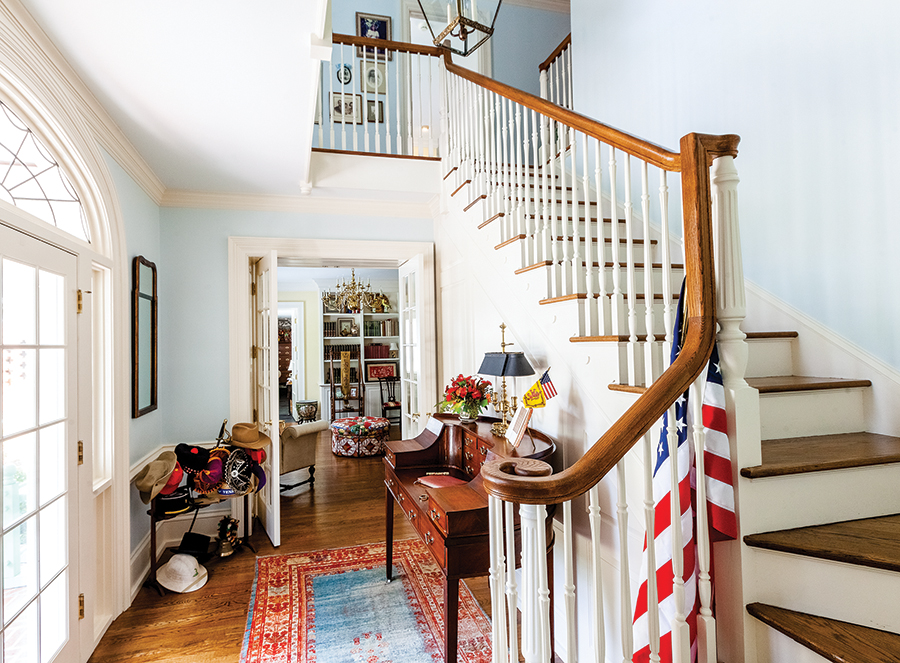 What Ambassador Walter Hines Page started others have continued in a style both innovative and respectful of times when people paid calls, wrote thank-you notes and took Sunday drives. As its current chatelaine Ann McAllister realizes, even greater potential as a family homestead.

“This house needs three or four kids running around. I have tried to preserve it for someone down the path, a continuing challenge.” PS