And a couple embracing both 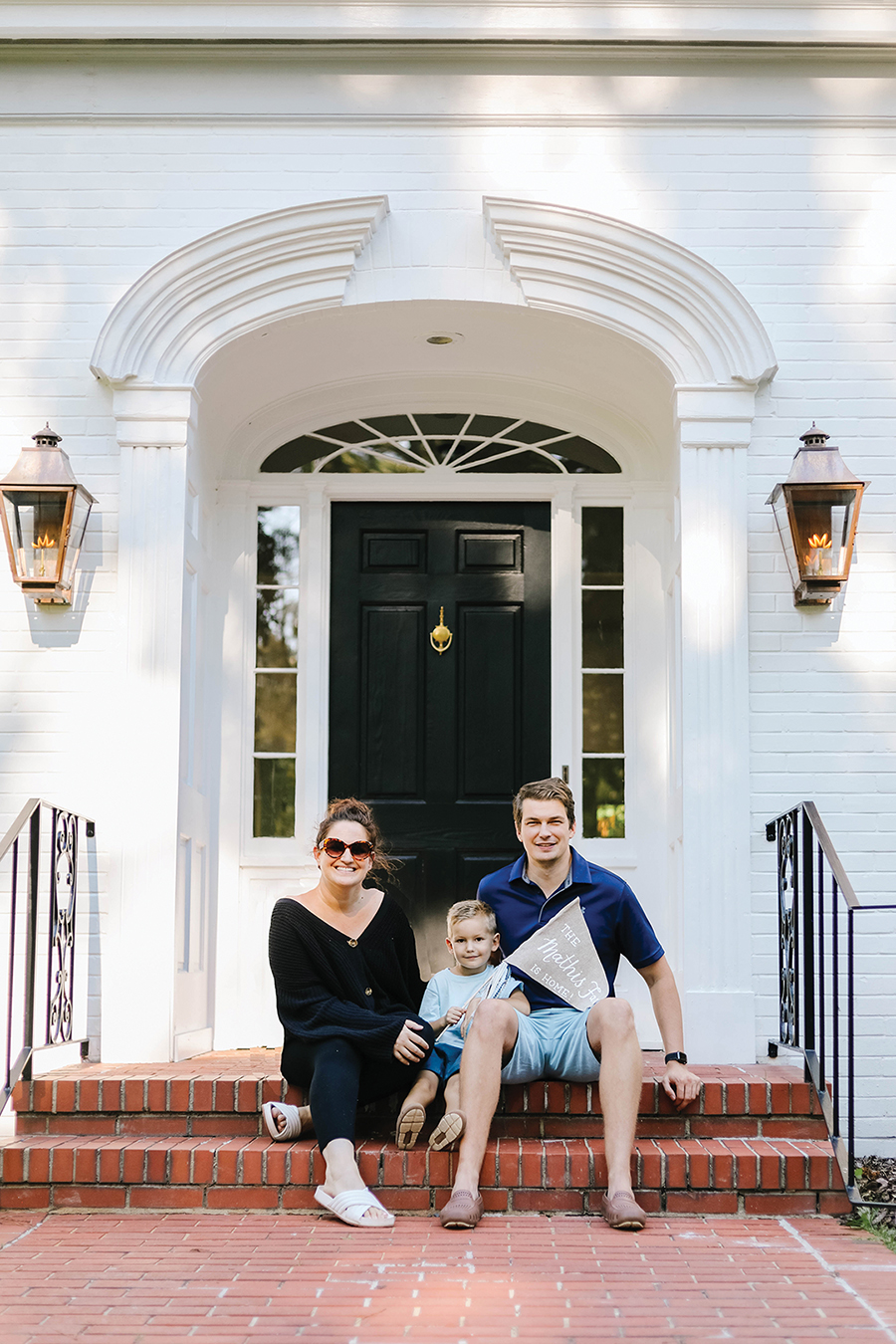 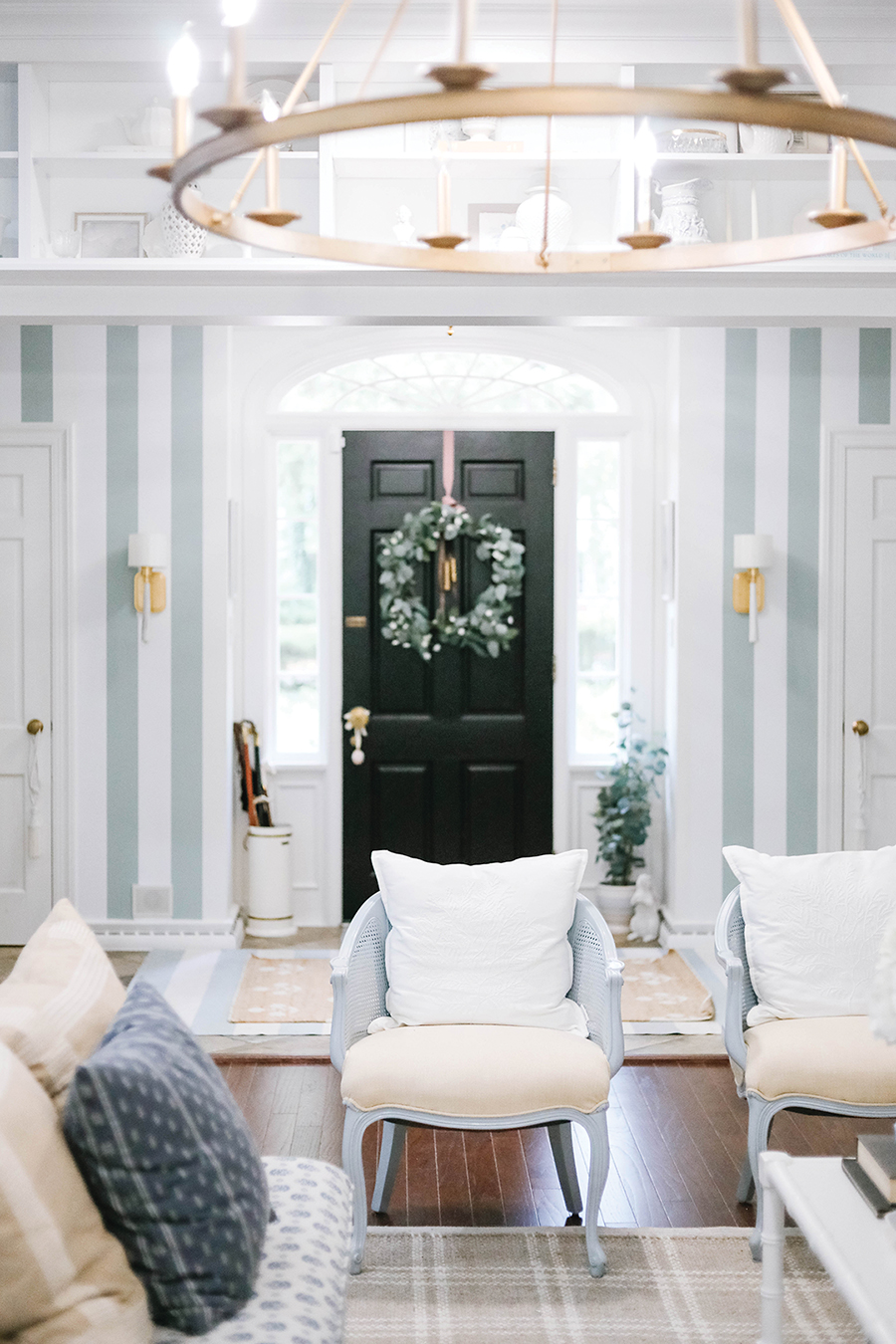 Something old, something new, nothing borrowed, lots of blue add up to a Pinehurst showplace named Jefferson Cottage.

Cara, Gavin and 6-year-old Holden Mathis comprise a young family with traditional ideas; their home – a white-painted brick single-story with modified mansard roof and wings extending into an acre of Old Town Pinehurst.

Cara, a former FBI agent, now an artist and photographer, explains the interior styling, which includes tennis rackets, oars, equestrian and golf memorabilia. “I love it that we live in an area rich in the history of these activities,” she says. “I like to think of my style as ‘resort heritage,’ which incorporates antique and vintage leisure activities in décor and styling.” She calls their efforts heritage stewardship and, to further the goal, has joined the village’s Historic Preservation Commission.

For decades wealthy urbanites seeking mild winters snapped up cottages built by the Tufts family in the first two decades of the 20th century — and the additional homes, in similar architectural style, that followed. They enlarged and renovated these “cottages” to the gills, but the supply was finite. When it gave out, seekers built Georgian mansions or Tudor castles interspersed with Arts and Crafts, Southern plantation, Cape Cod and a few modern and postmoderns.

Jefferson Cottage was built in 1960, a product of the postmodern era. That explains, perhaps, why chez Mathis has a faintly French country exterior, but inside, the large rooms, spa baths and dream kitchen are everything Americans expect. History doesn’t interfere with beauty or comfort. 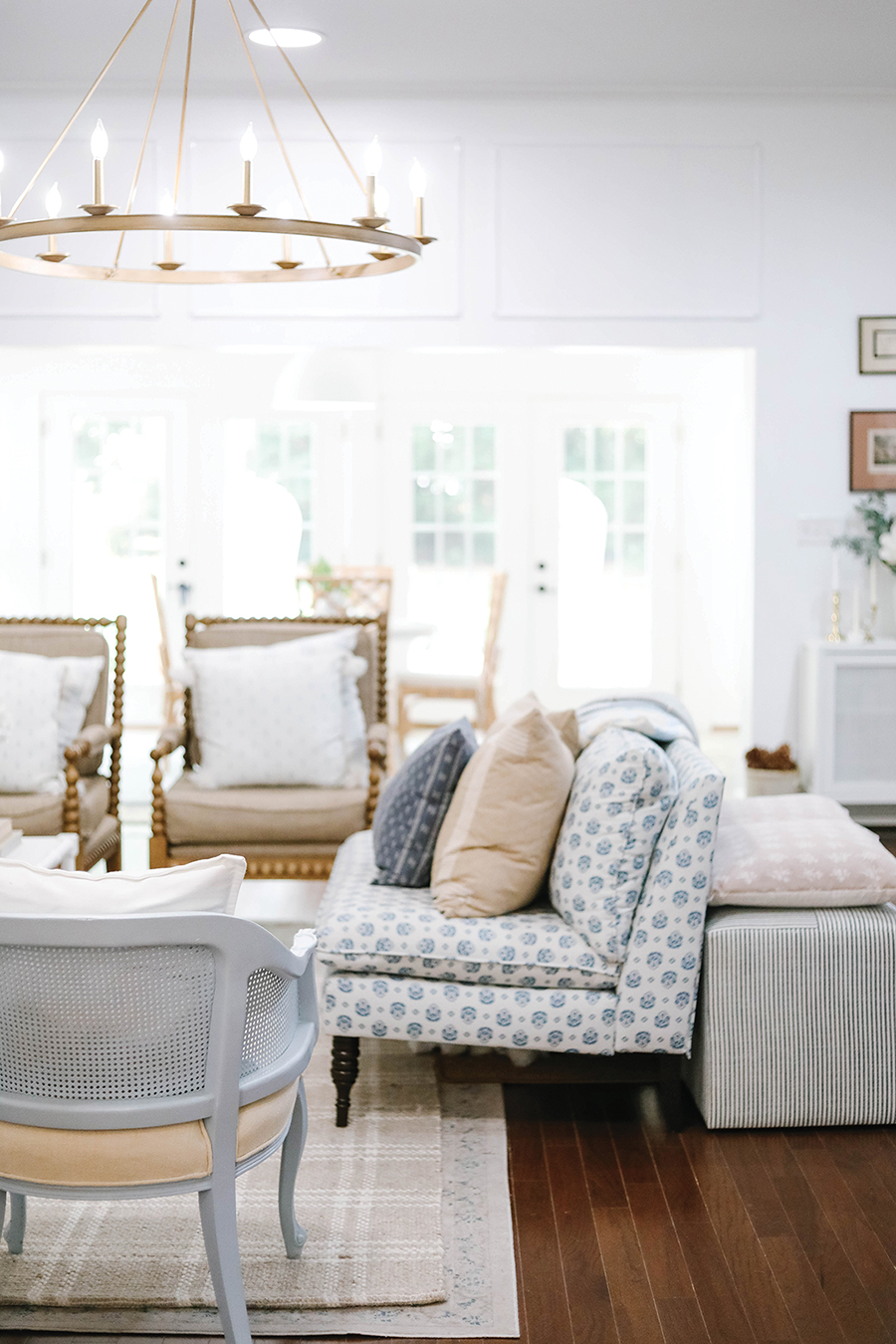 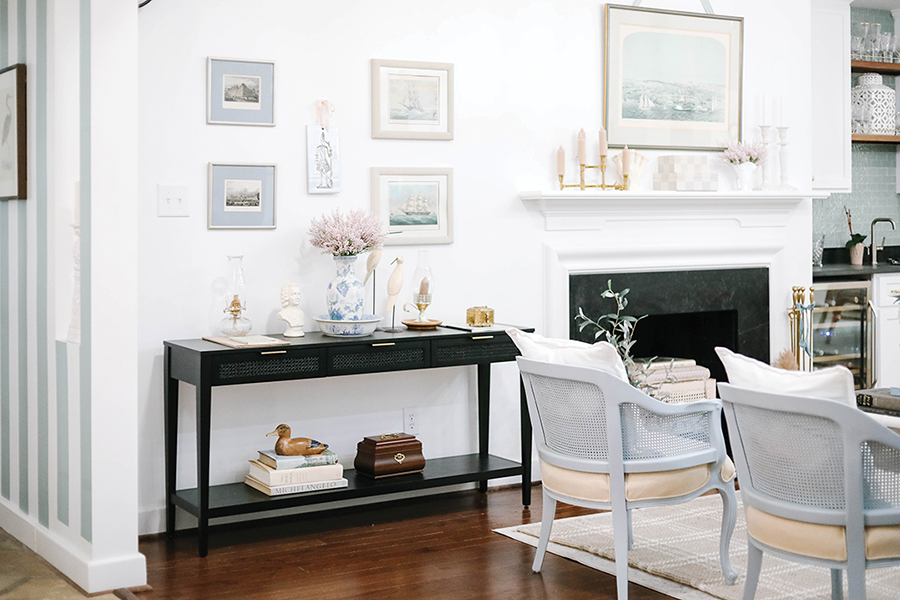 Cara grew up in a gracious Philadelphia suburb. Gavin is from Montana. “My father managed an airport. I rode my bike on the tarmac,” he says. They met in Washington, D.C., where Cara was FBI and Gavin, a lobbyist. Cara fell in love with Pinehurst when her parents bought a vacation home here in 2008. She and Gavin were married in the Village Chapel in 2014. The young couple planned, long-range, to retire in Pinehurst.

Cara was posted in Utah when COVID struck, prompting a reboot in employment and residence. Driving down Linden Road, she decided someday she’d like to live under the tall pines. By coincidence their Old Town residence, at the time newly renovated by contractor Travis Wallace, was on the market. It positively glowed. Cara liked what she saw, with a few additions, like removing a foyer wall and creating a dramatic proscenium entrance to the living room, sunroom and gardens beyond. 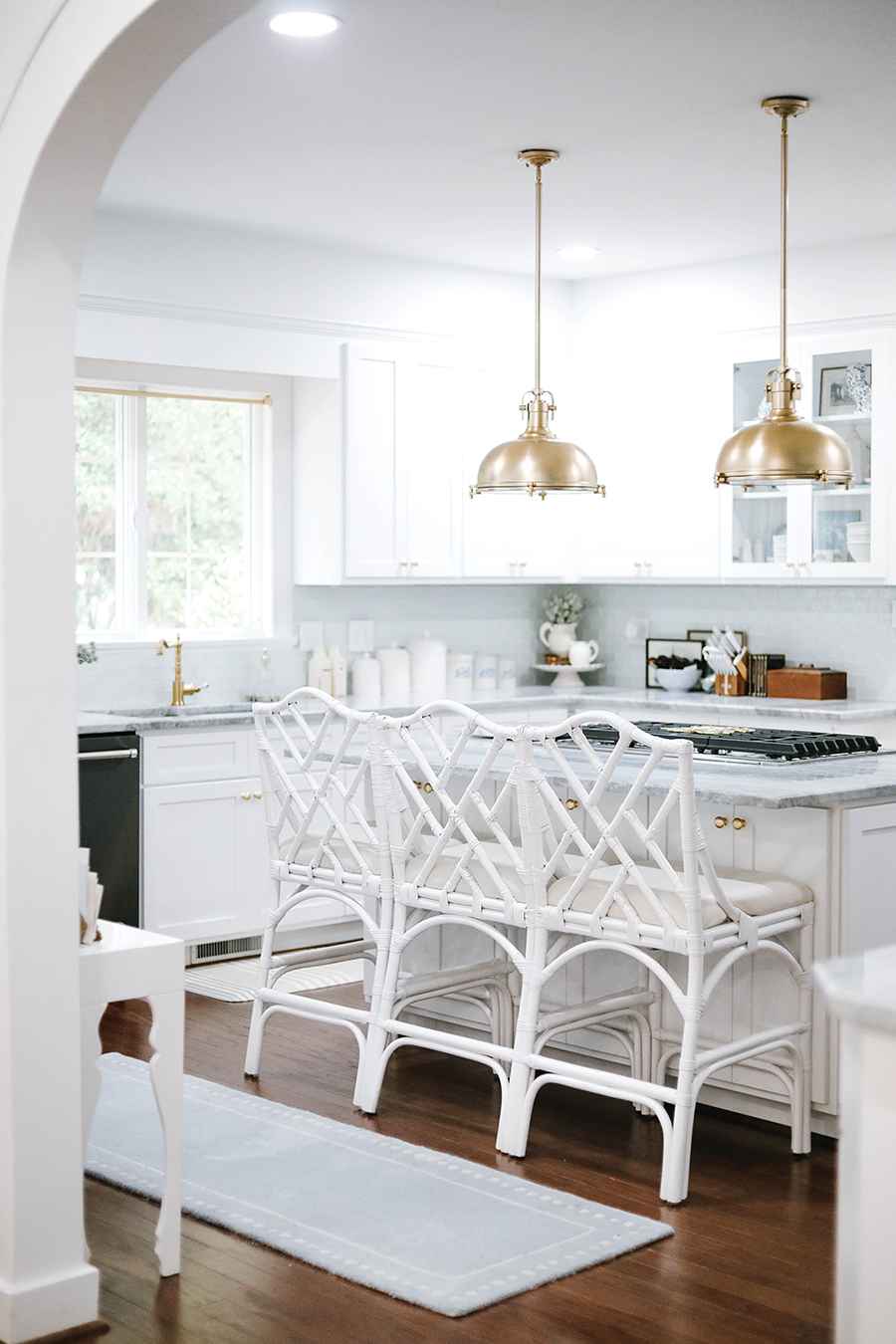 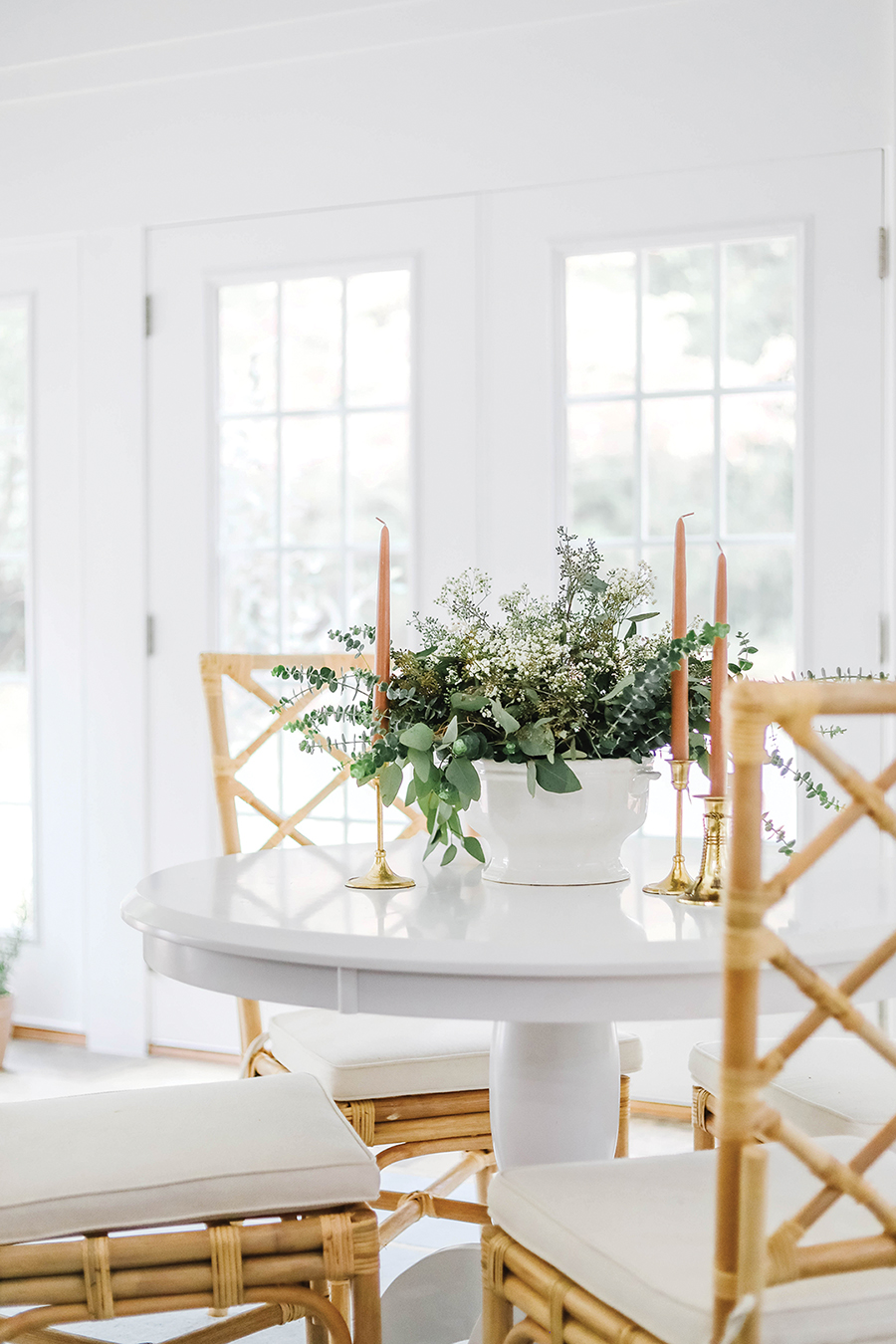 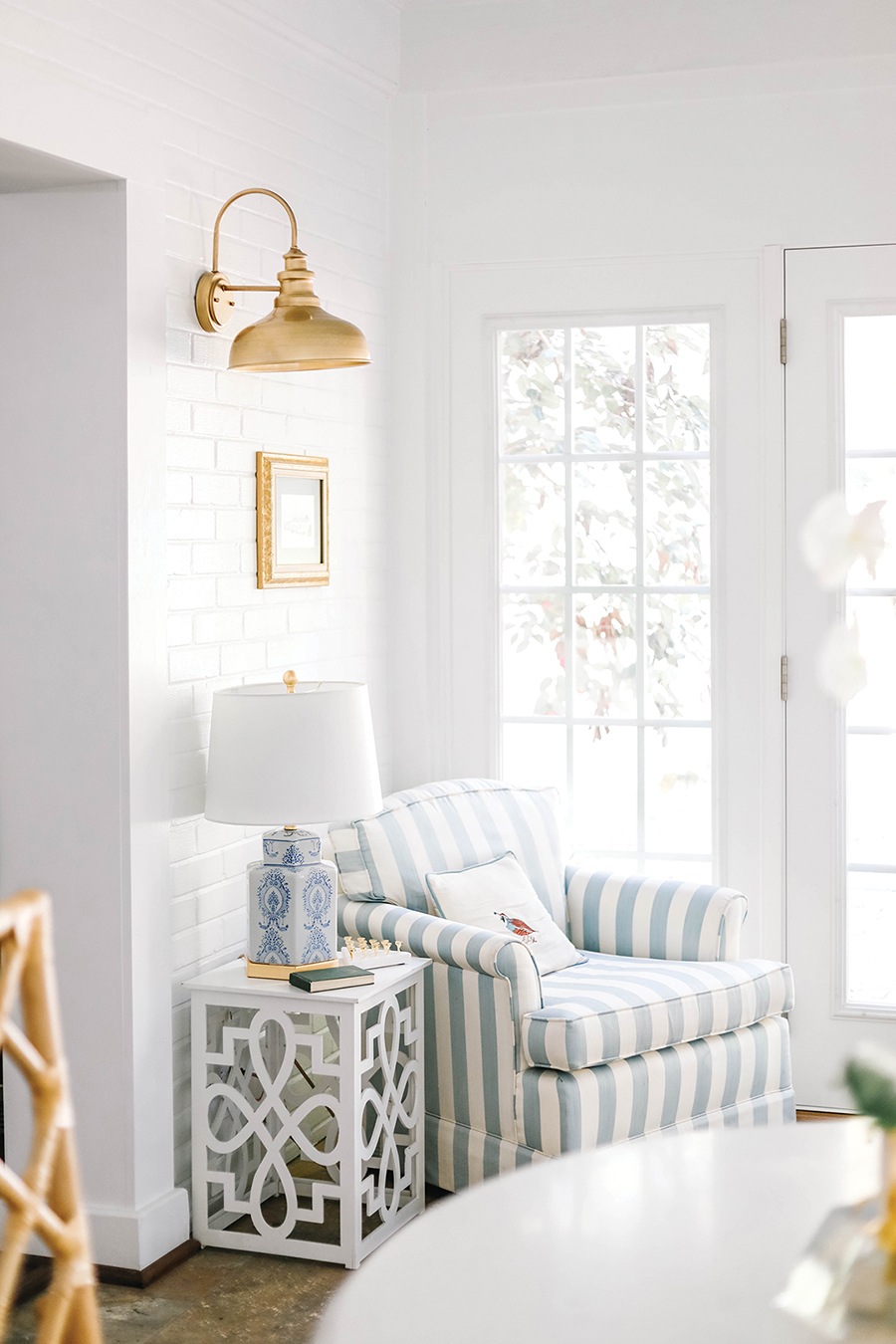 Gavin is a venture capitalist who telecommutes while Cara pursues art and photography, both from home offices in their Carolina chateau, which has evolved as elegant and livable, kid-friendly and entertaining-ready. Its furnishings, most purchased for this house, illustrate the methods of the daughter of an antique dealer, who knows where to find what, online or otherwise. “My mother taught me to have an eye. I can walk into any store and just know,” she says. Cara points to a framed antique map of New Bern, North Carolina. “Twenty dollars,” she says. Gesturing toward a massive breakfront she says, “We drove to Myrtle Beach to pick it up ourselves.”

Cara mixes pieces from Wayfair and Ikea with classics from Facebook’s Marketplace, local estate and Habitat for Humanity sales. The workplace element greatly increases the amount of time spent at home — all the more reason to make it perfect which, for Cara, means refreshing, relaxing.

As though obeying the command “let there be blue and white” the color scheme dominates every room. On a palette where white offers 50 variations Cara’s choice is neither vanilla nor milk, eggshell nor moonbeam, but the purest, cleanest stark white. Blues run from a Carolina blue wallpaper with birds in the dining room to books bound in navy, stacked on living room shelves. She allows a few grains of sandy taupe, mainly in rug-over-rug arrangements on oak floors stained dark. Gray appears in the statuesque gunmetal kitchen appliances. Black accents are permitted, in the form of two rambunctious kittens, but the blues dominate on white fabrics, wallpaper, bedding and her vast assortment of china and transferware. 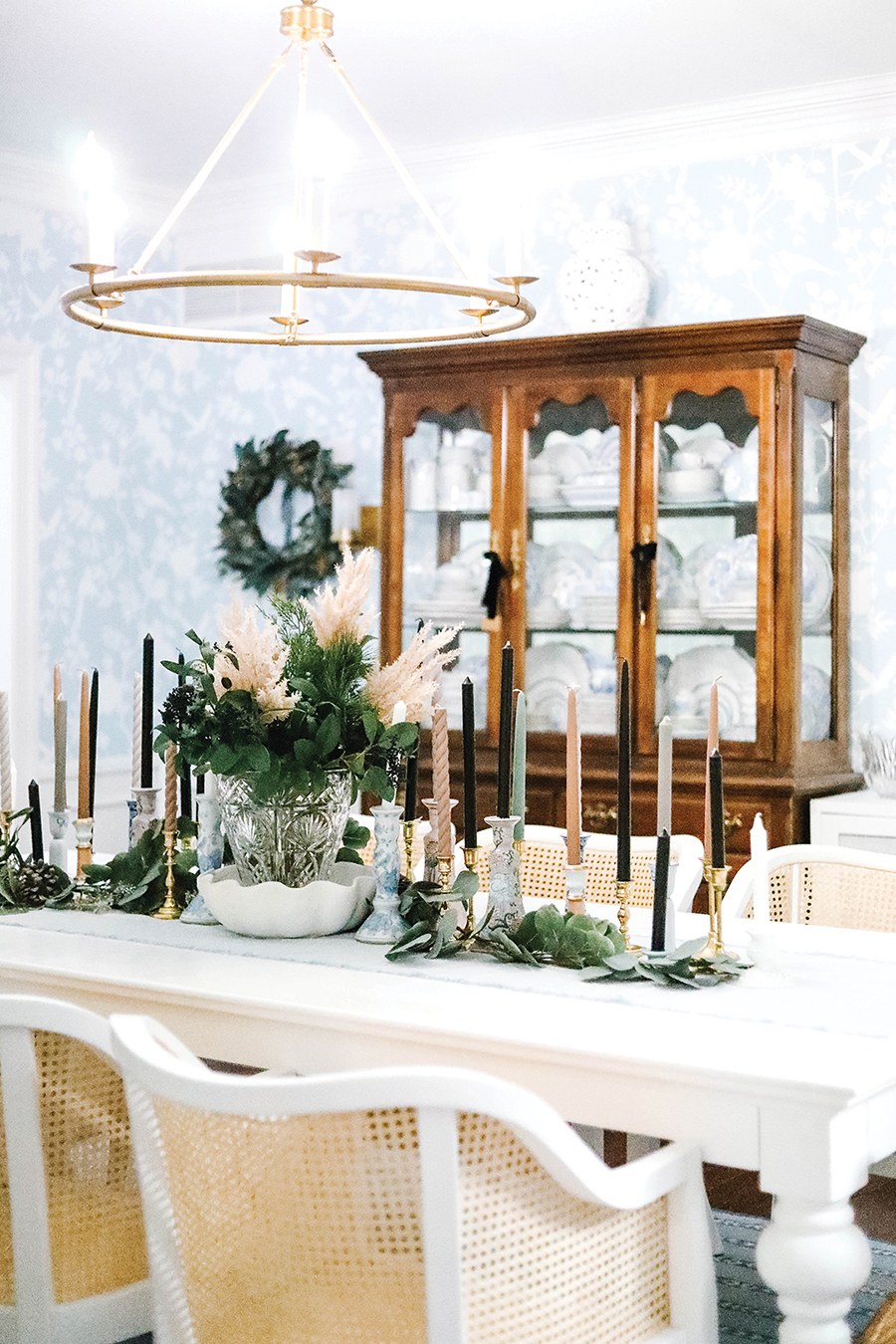 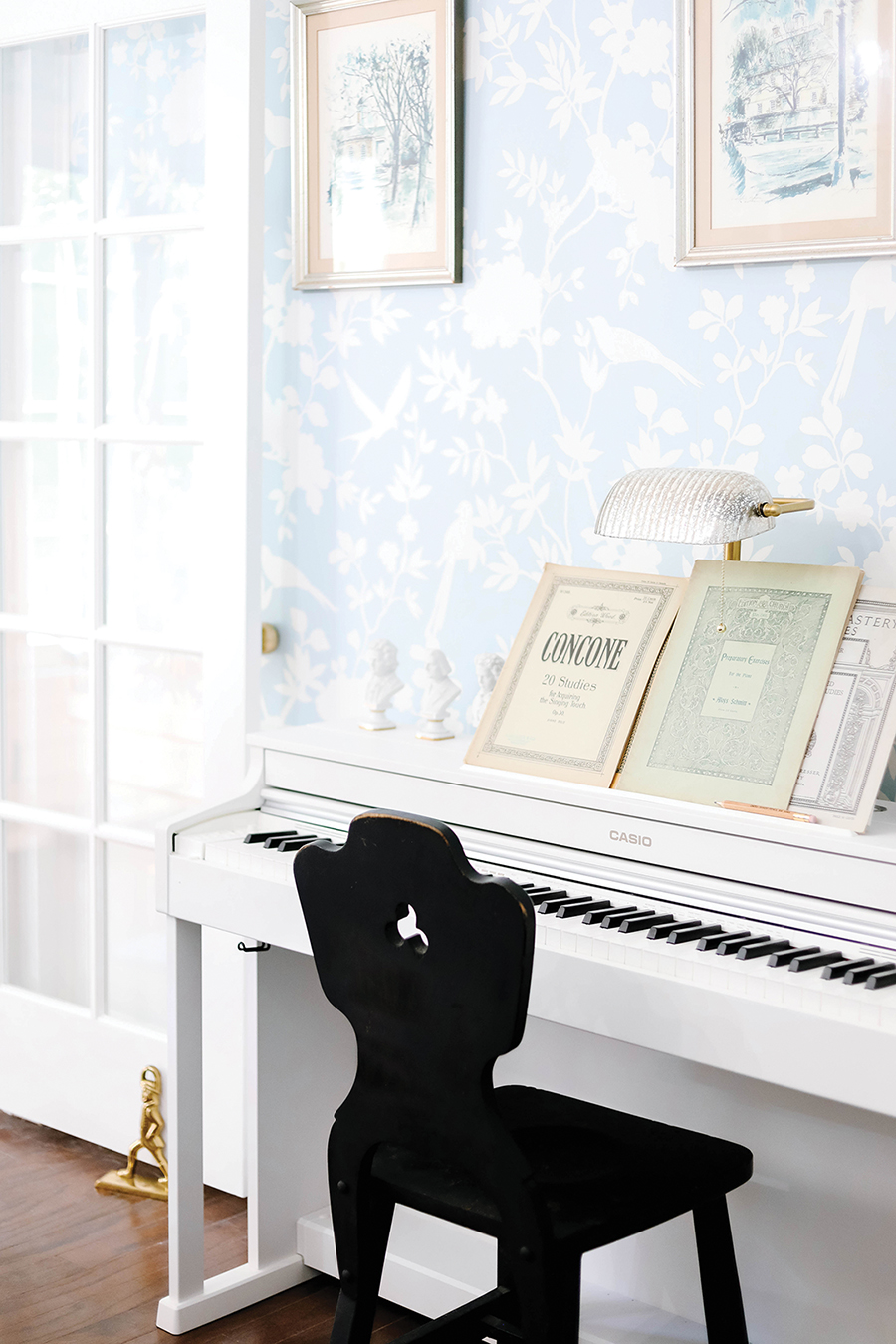 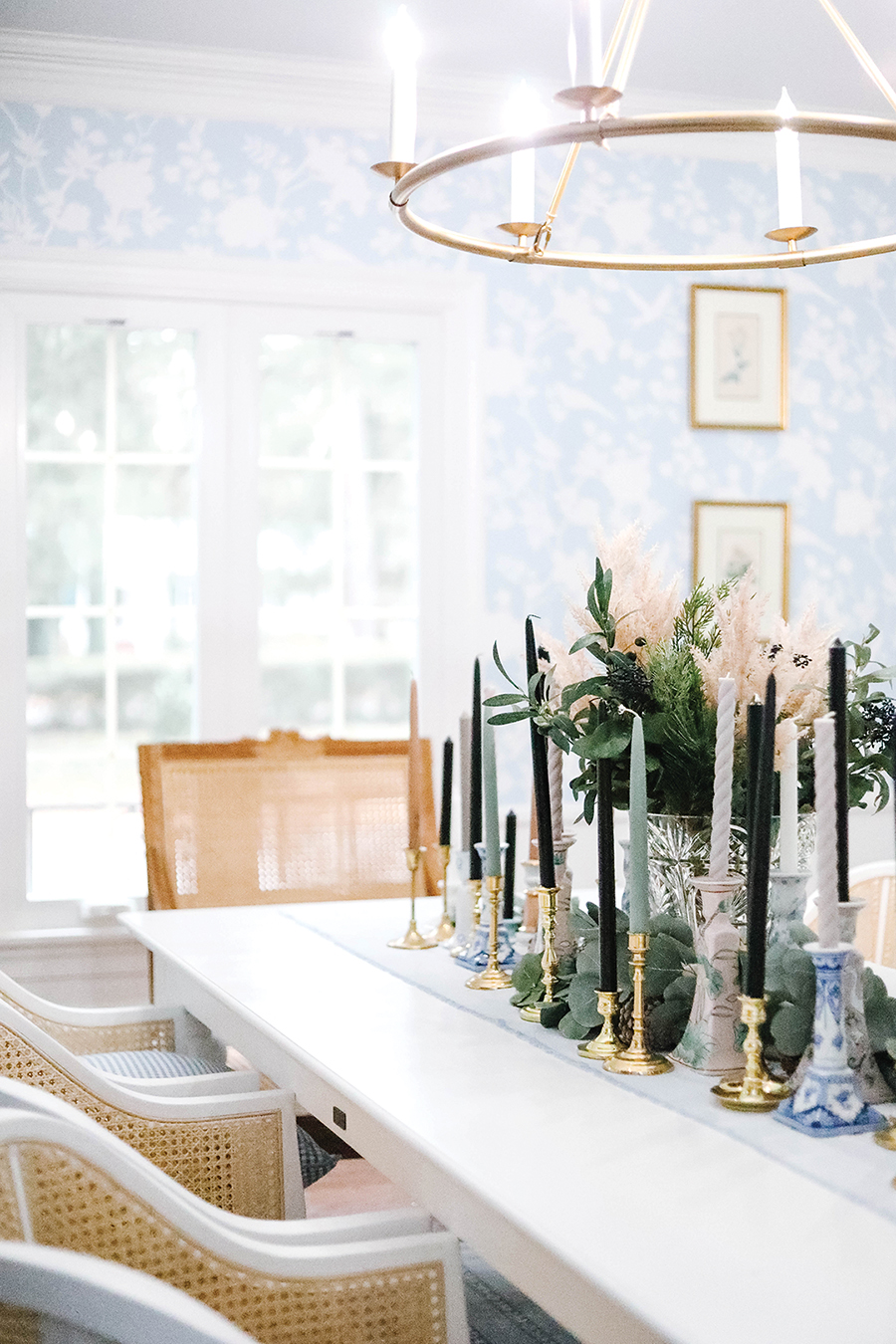 Cara believes in displaying her collections and, given the room proportions afforded by Jefferson Cottage, they don’t appear cluttered. Approximately 40 candlesticks holding candles of different heights march down the center of her white dining room table. Wall art includes old prints, lithographs and fine line drawings, many her own work, depicting golf and equestrian scenes. Some match family life events — sailing ships hang in Holden’s room because he was born in Annapolis, Maryland. Cara drew and framed the Jefferson Memorial in D.C., where Gavin proposed.

Perhaps Cara’s most fascinating collection is a set of FBI challenge coins, bestowed as rewards for professional services and/or sacrifices. 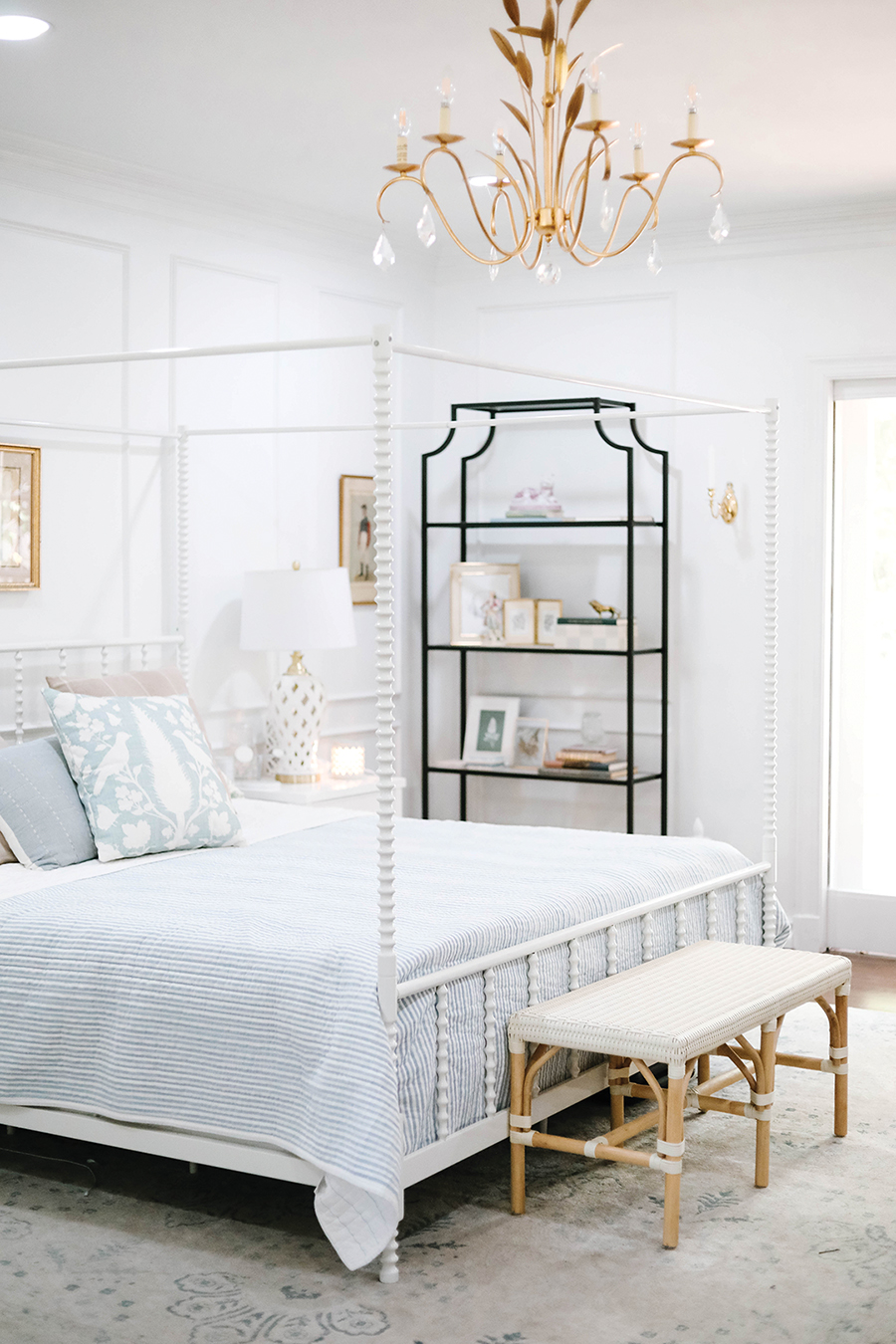 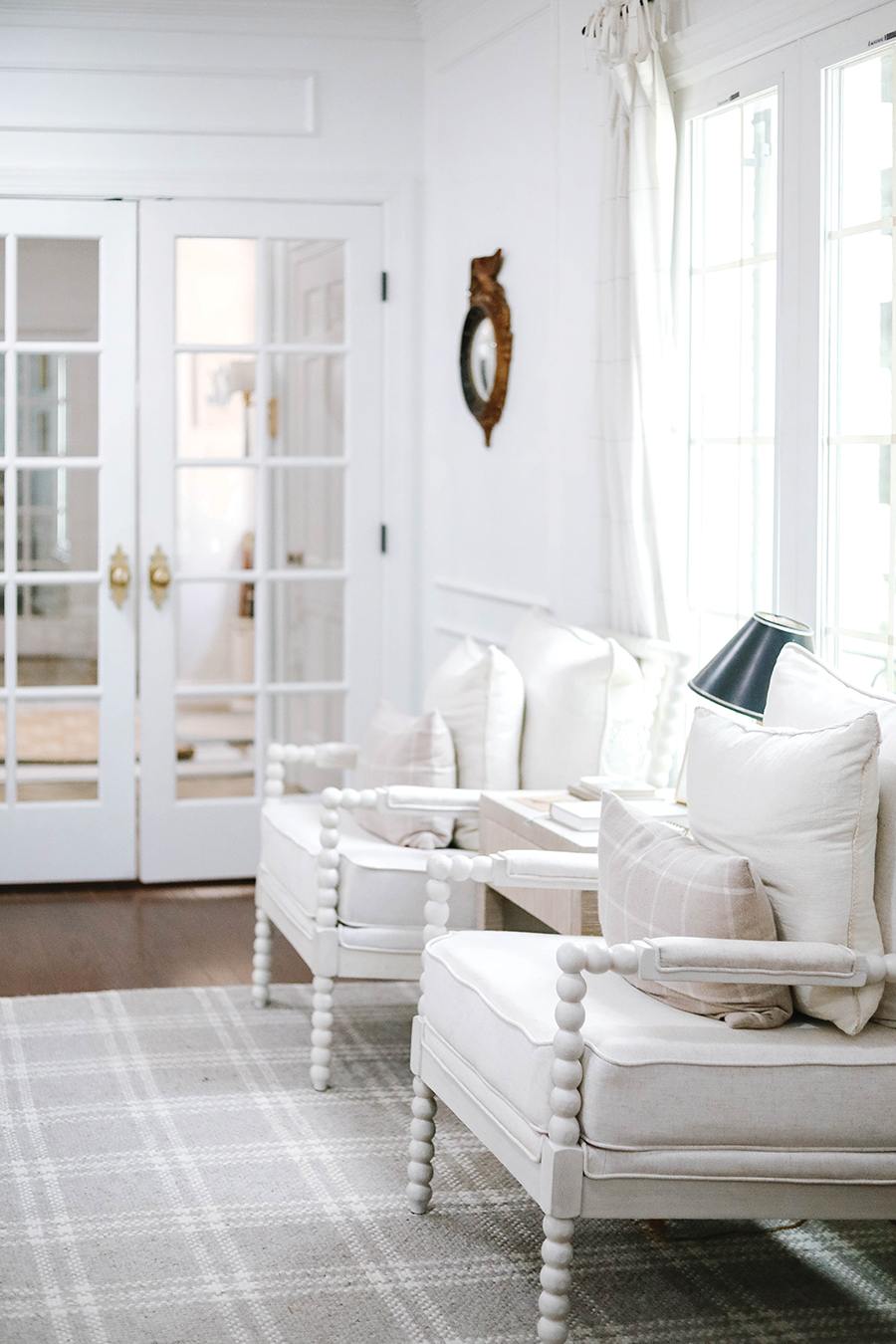 Travis Wallace’s initial renovation resulted in minimal structural changes. To avoid others, Cara repurposed spaces. Family meals are eaten at the sunroom table adjoining the living room or at one of two breakfast bars. Kitchen cupboards were moved and a coffee bar added. Gavin, who does most of the cooking, likes the results.

The dining room is reserved for holiday gatherings attended by Cara’s parents and sister, who live nearby. An oversized family room with French doors just off the foyer became the master suite with two of the five bathrooms. Down the hall two more bedrooms serve as home offices. The opposite wing is divided into Holden’s room (with play space and a queen-sized bed) and a guest suite with bedroom, kitchenette and separate entrance. The double garage, which opens on the side to preserve the symmetrical façade, contains a mini-gym and golf cart parking.

There’s no massive media presence, thank you very much. This family owns only one TV. Select programs are watched via iPad. 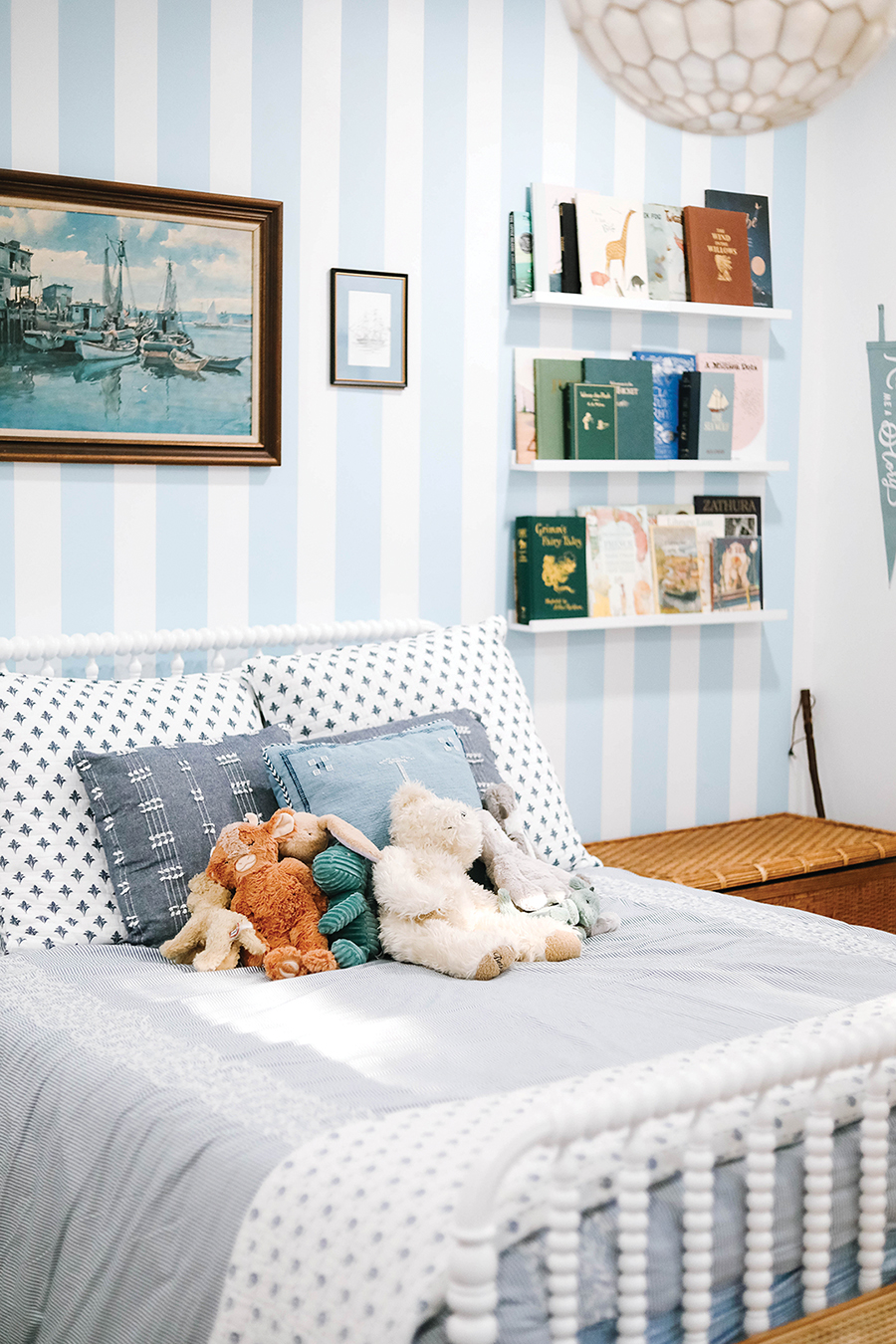 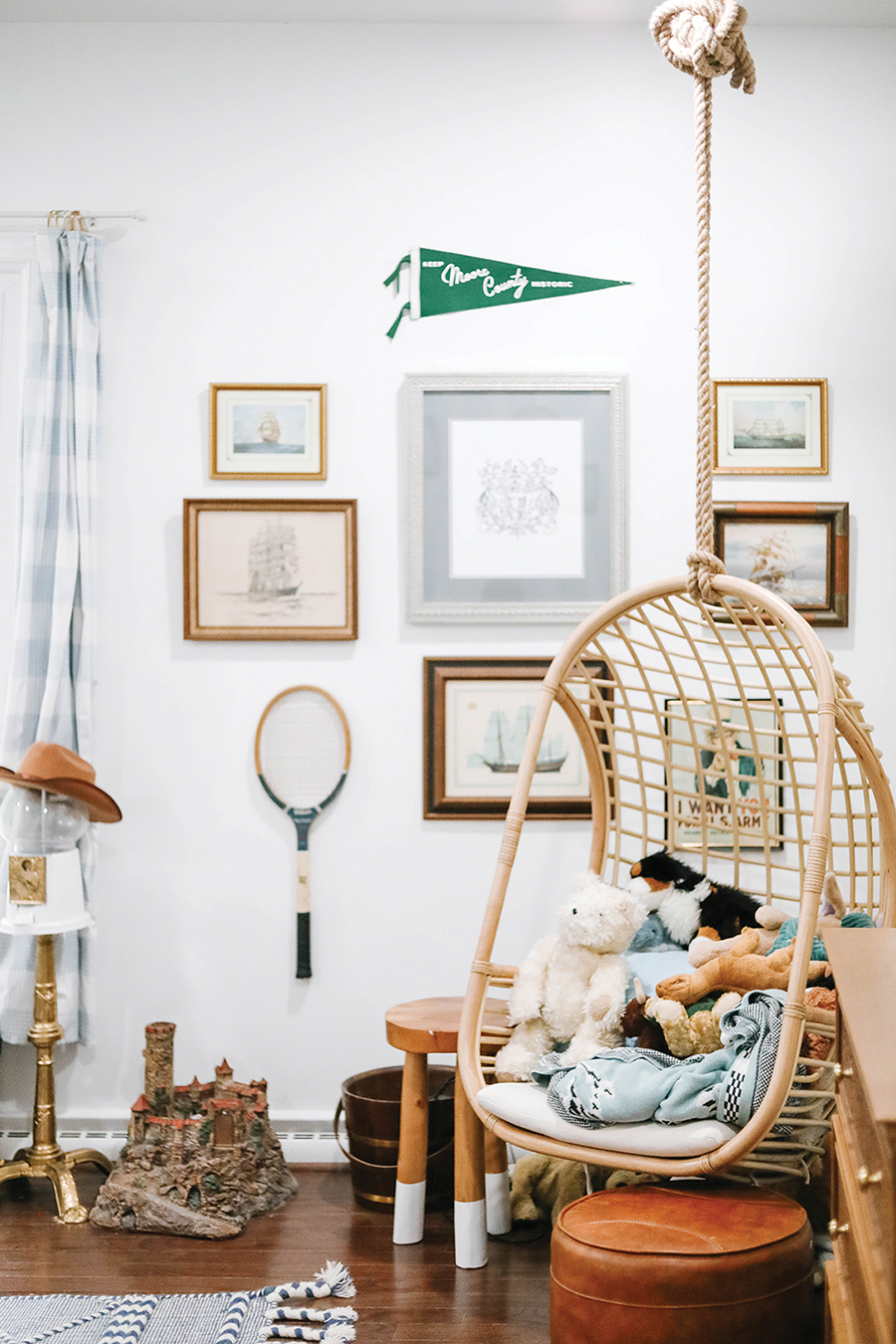 The longitudinal footprint of this handsome residence allows three terraces out back — one for cooking and eating, another with a daybed swing, the last for conversation. Holden’s play “fort” occupies a corner. They decided against a pool since the hotel is practically across the street. “Living here is like being on vacation every day, like a Hallmark movie,” says Gavin.

“With an outdoor space like this why go to Italy?” Cara says.

As renovators of Pinehurst landmarks confirm, the village’s earliest cottages can become money pits. Gavin appreciates the sturdiness of Jefferson Cottage. “This is solid construction, plaster over brick,” he says. Otherwise, for décor and furnishings, “I trust Cara completely.” 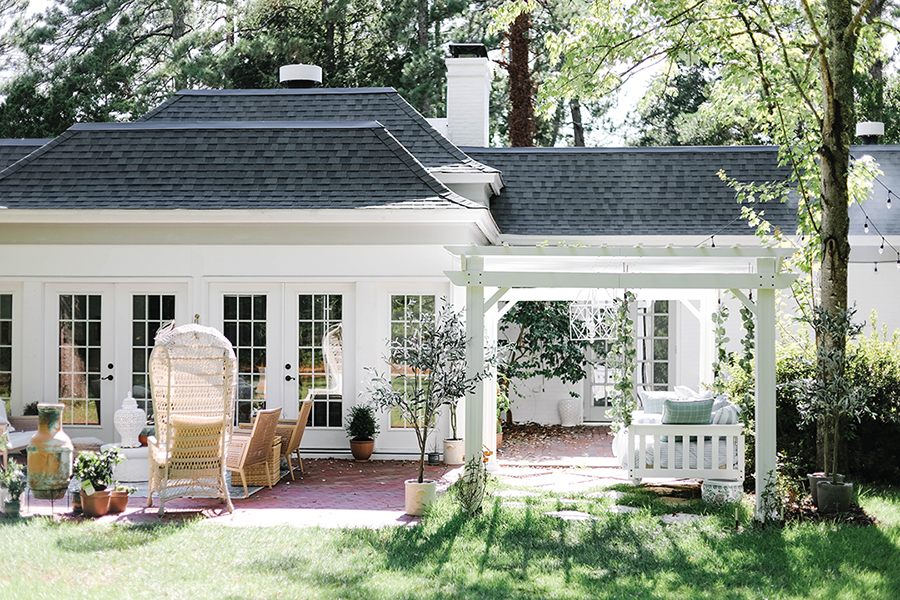 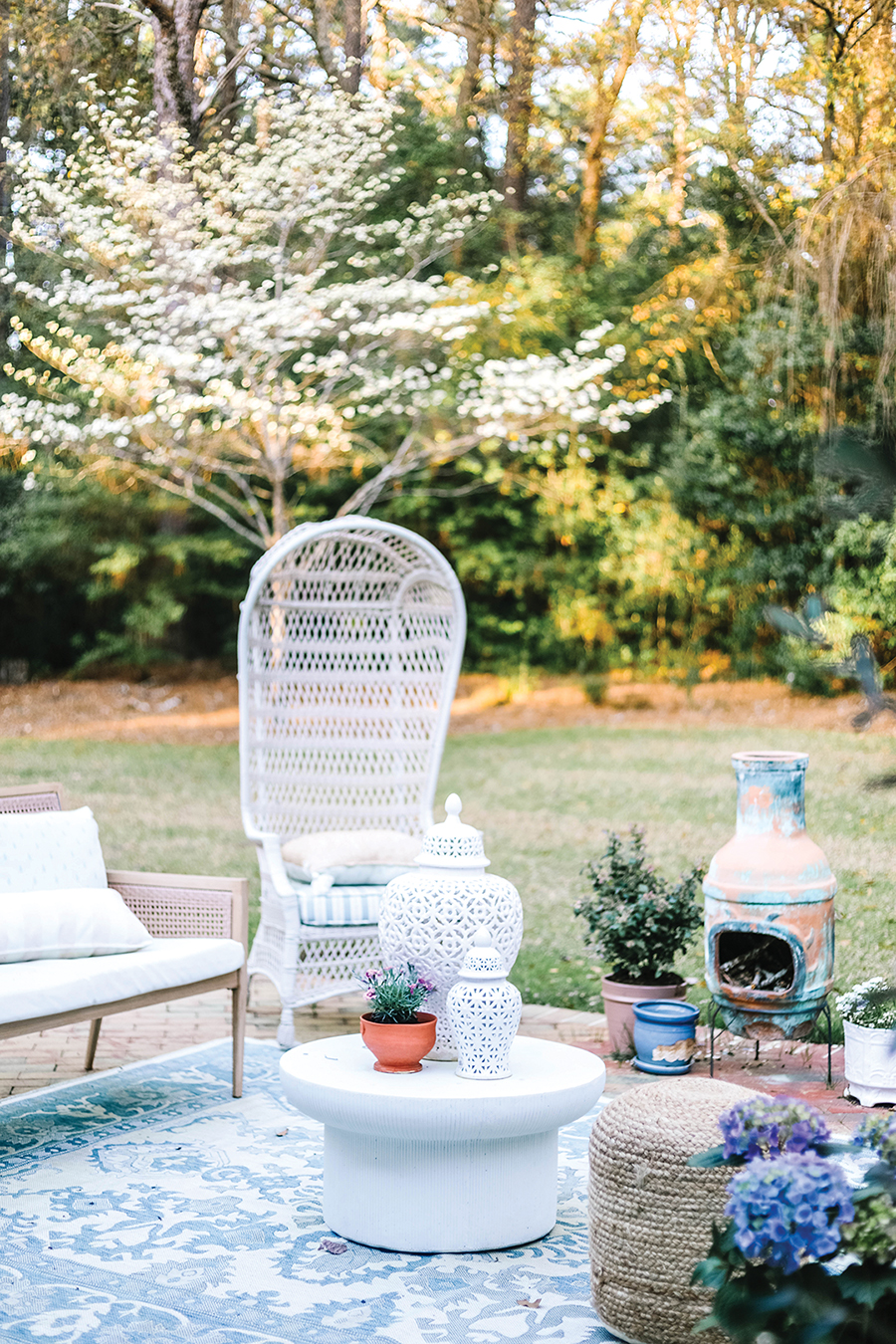 As well he should. “I think of heritage homeowners as stewards rather than owners,” she says. “I’ve been charged with protecting the integrity of this home and enhancing its beauty.”  PS