Fit for a Queen

“What’s in a name?” Possibly, quite a bit, when applied to Red Brick Cottage.

This appellation, plus “1920,” appears on the shingle hanging outside this Pinehurst village showplace. Glenn Phillips, who with his wife, Pat, purchased the house in 2019, was intrigued. The retired luxury home-building executive, also a civil engineer, knew what to look for, like an original tile roof and copper gutters. He doubted the date, since brick was not common during the white clapboard teens when, in 1918 and 1919, Leonard Tufts sold two lots to H.B. Swoope, a Pennsylvania coal baron who snapped up the whole corner facing the Carolina Hotel. The superb construction suggested either a greater investment than its neighbors — or perhaps materials and workmanship bargain-priced during the Depression. Glenn searched village records for support.

“More likely (into the) ’30s,” he concluded, although one document on file at the Tufts Archives lists nothing more specific than the ’20s. Odd that no architect is mentioned, given its unusual quality and features, starting with ornamental brickwork around the front door.

In any event, Swoope died in 1927. His estate sold the property to A.C. Judd in 1929, who sold it to Sprigg Cameron in 1930, causing much confusion among family ghosts searching for their proper haunt. 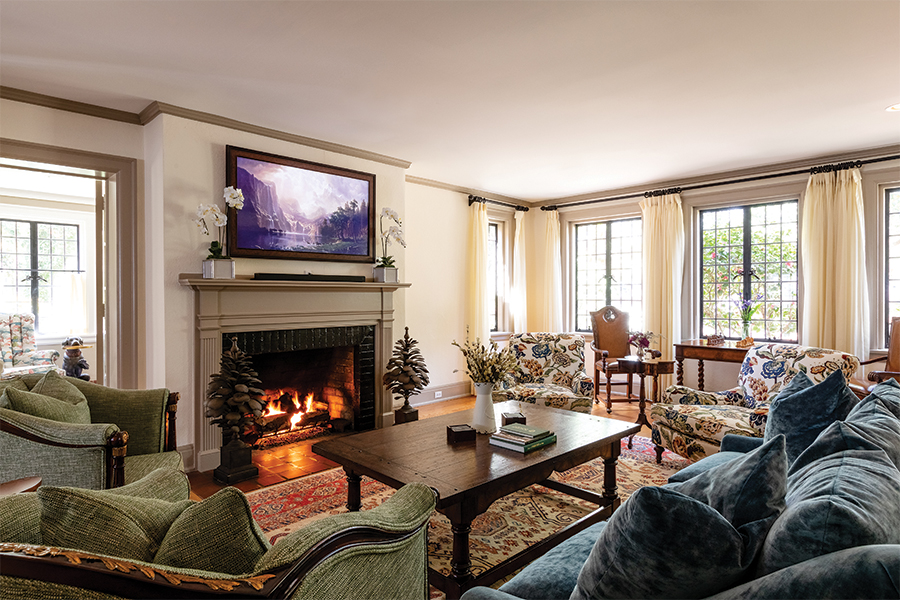 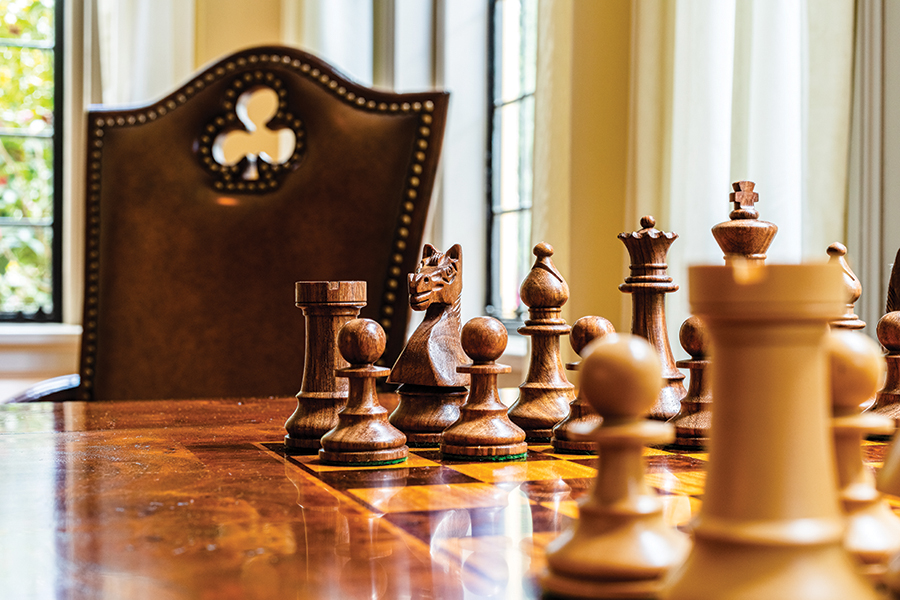 Set far back from the street on an almost double lot, the house appears smaller than its actual 5,000 square feet. This optical illusion is furthered by an L-wing not visible from the front. The wing contains a garage with servants’ quarters over it — accessed by a back staircase — which are now charming guest bedrooms in refreshing blue and white, each big enough to hold two queen-sized beds. 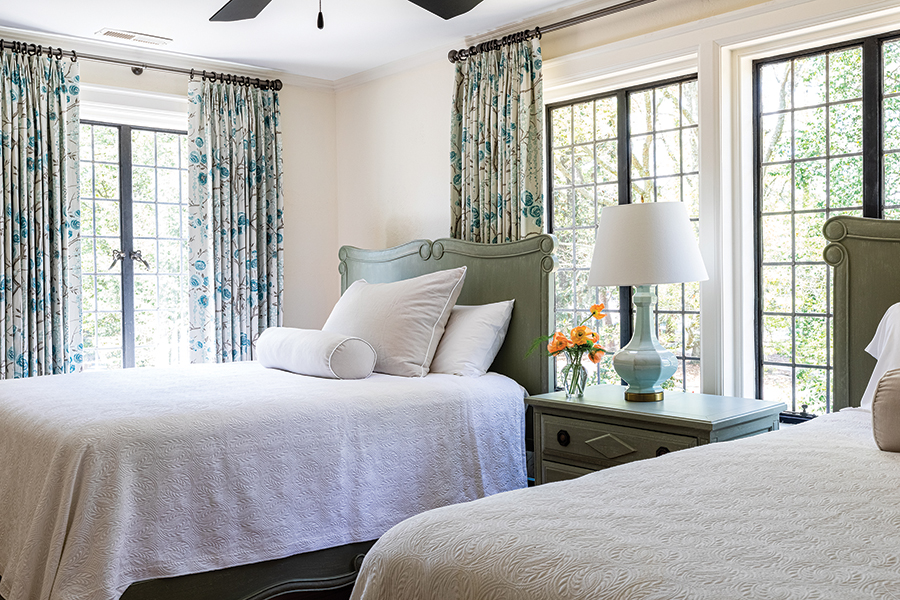 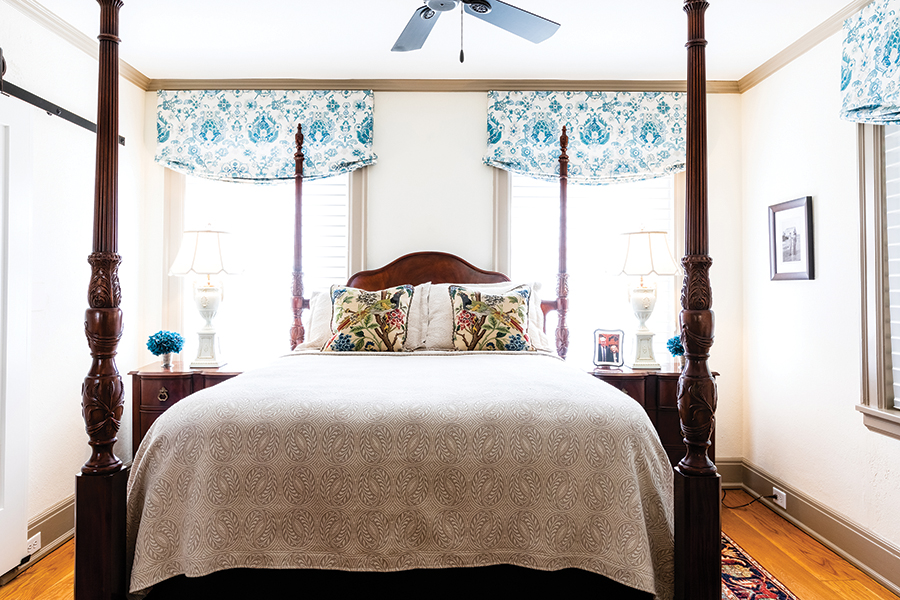 As for “cottage” — hardly. Cottages are sweet little lakefront dwellings. Brick previews the formality of a settled family dwelling, perhaps even year-round, although before residential AC even the ghosts headed north in July.

And now, Red Brick Cottage has reclaimed its purpose. The Phillips family will use it as a seasonal gathering place for their adult children and two grandchildren, giving them more indoor space than their longtime primary residence: a 42-acre horse farm in Durham where they raised a son and three daughters in 2,400 square feet, with two bathrooms.

The Phillips family, originally from New Jersey, discovered Pinehurst while attending their children’s equestrian banquet at the Carolina Hotel. During subsequent visits they walked the village, liked what they saw. “This is a place where I thought I could live,” Glenn recalls. In addition, businesswoman Pat and daughter Veronica wanted to acquire a boutique. Monkee’s in Southern Pines was available.

How better could the stars align?

They learned of Red Brick Cottage from Cathy Maready, an interior designer who had done their beach house on Figure Eight Island. Maready knew of its upcoming availability through the owner. The transaction was completed without the house ever hitting the market. It needed only minor upgrades, including a larger bathroom for the master bedroom, which Glenn and Pat moved to the main floor study adjoining the living room — unusual but practical as homeowners age. Luckily the new stall shower fit into an empty elevator shaft. 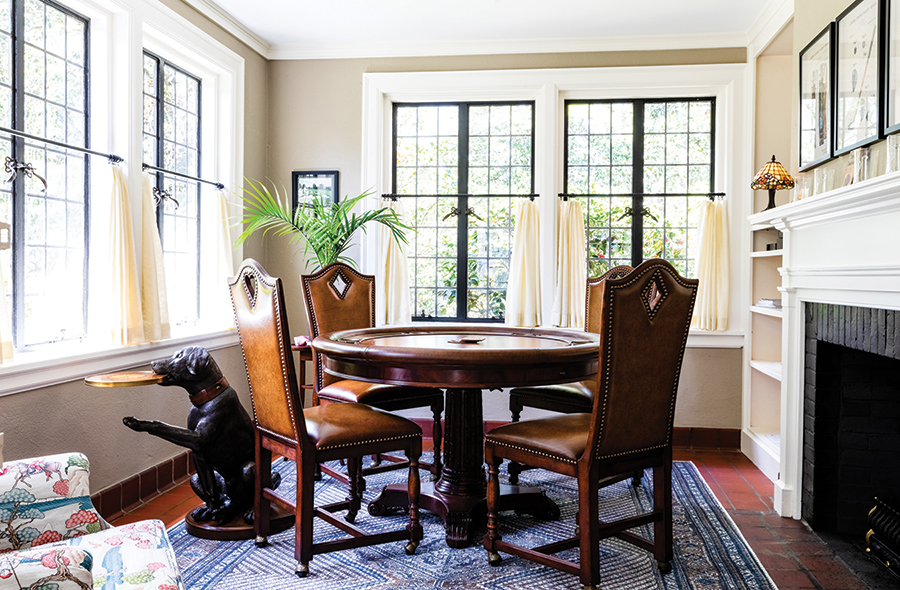 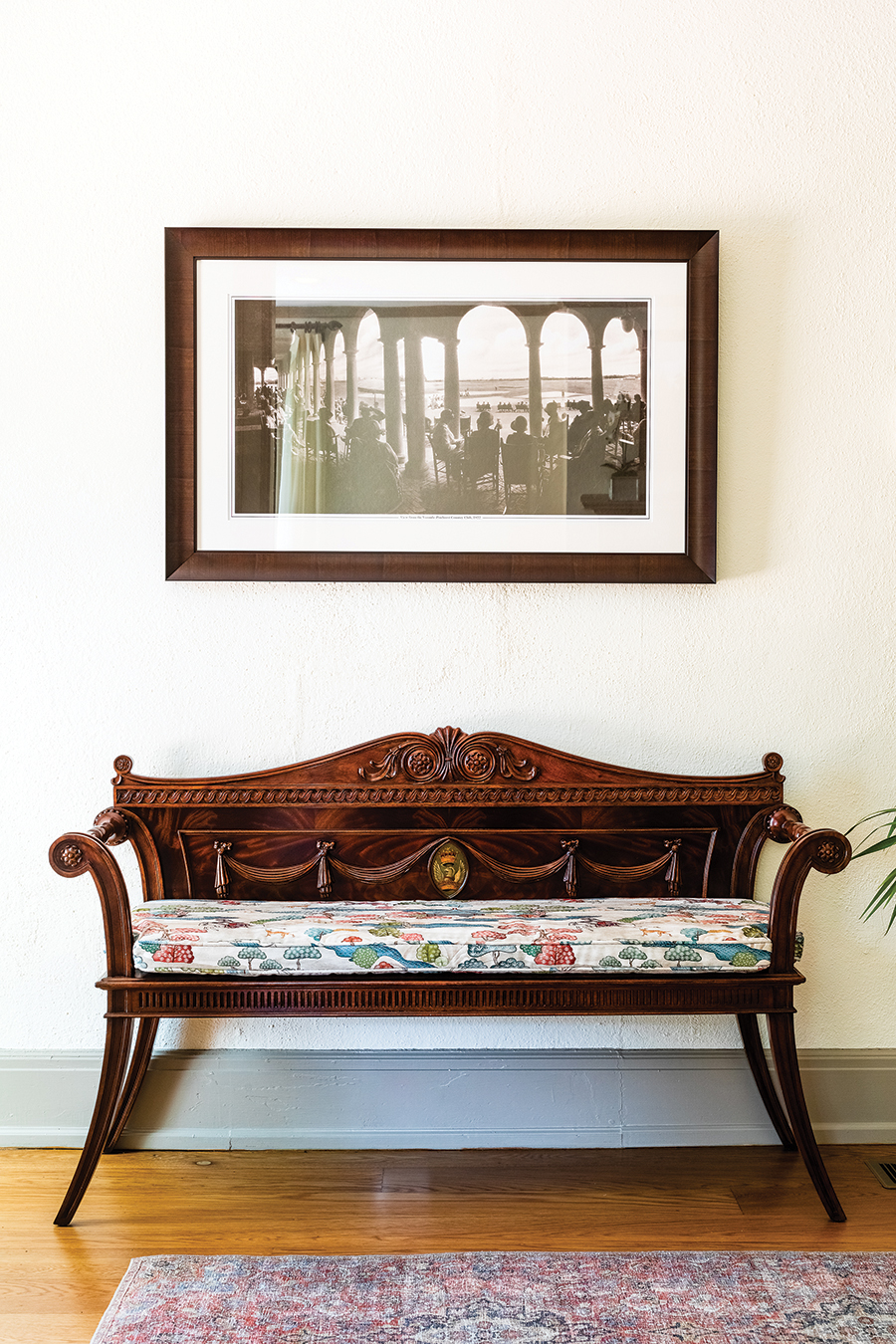 Since they would bring nothing from Durham, what the Phillips needed was an interior designer familiar with their tastes to interpret, locate, select and deliver.

“A dream client,” says Maready, who was given a budget and free rein.

The only mandate: Create décor that fit the pre-Depression era, as if rescued along with the house from a time capsule.

Furnishings that fit the description do exist but require legwork. Maready had a better idea: a package. None was more suitable than reproductions licensed by Princess Diana’s brother, Charles Spencer, the ninth Earl Spencer. Known as the Althorp Collection, these pieces duplicate chairs, tables, sofas, chests and accessories found at the 90-room ancestral manor the Spencers have occupied for 500 years in Northamptonshire. Diana is buried at Althorp.

Maready met the Earl when he launched the collection at the High Point furniture mart. From this finely crafted array she created a portfolio for the main floor living room, master bedroom, hallway, dining room and wherever appropriate.

“I look at (my clients’) faces,” Maready says. “I want them to feel pretty in that space.”

Almost all her selections were approved, some country English, others to the castle born, allowing for inlaid woods, a crushed blue velvet sofa, case pieces, a butterfly table, a needlepoint box on legs, imaginative prints against which guests might imagine Lady Di and her little brother playing hide-and-seek. Maready invested in vibrant jewel tones of blue, green and red merged in the carpets. The game room and sun porch are done in sunny shades and less formal designs. Glenn, a details person, points out the game room fireplace, converted to gas but with fake coal that glows instead of logs.

Formality satisfied, he wanted a “fun” place to live, as expressed in a Chinese hunt motif fabric on game room chairs.

Original floors throughout are an unusual combination of narrow and wide boards in both clear and knotty pine, probably sourced locally.

The kitchen — already remodeled when the Phillips purchased Red Brick Cottage — defies period or classification. Long and narrow, it has full-sized sinks, one farmer and one oval, on each side. Down the middle, instead of an island stands a table big enough to seat eight on three-legged stools, and tall enough to double as a work surface. This European kitchen staple is joined by cupboards that are free-hung rather than built-in, two ovens set into a column, a backsplash in black, and antique red ceramic tiles. The effect is vaguely Scandinavian.

A few family heirlooms, including a writing desk belonging to Glenn’s aunt, supplement the Althorp manor ensemble. Wall-mounted TV screens with hidden wires and picture frames display fine art when the game is over.

But the blue ribbon is the oversized dining room papered in a blue avian print so dense that diners seated at a table for 12 can almost hear the birds chirping, feel their wings fluttering. 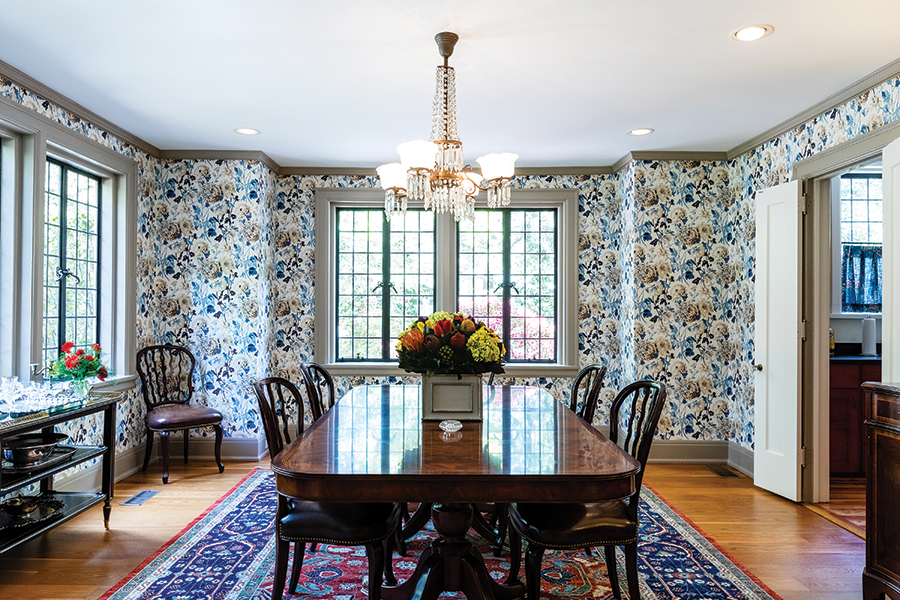 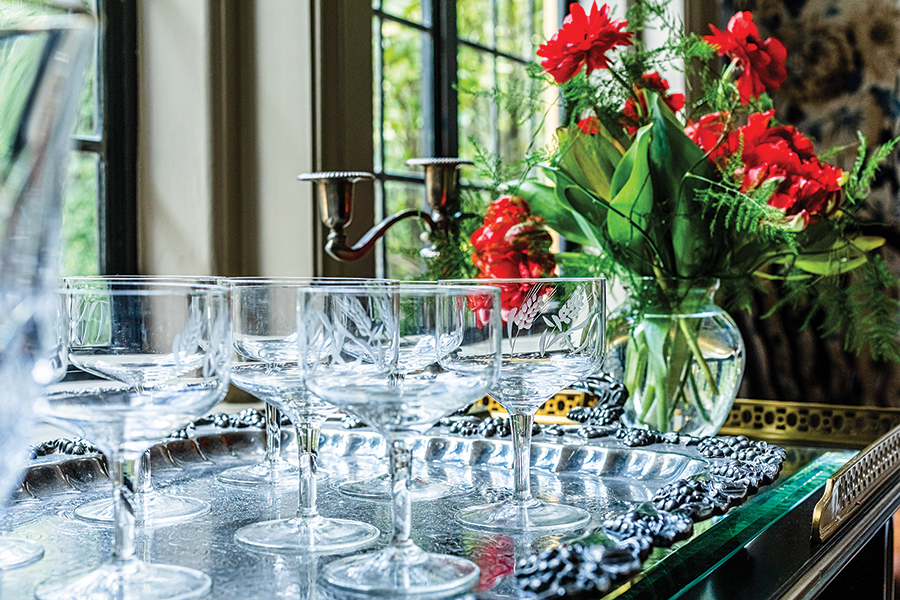 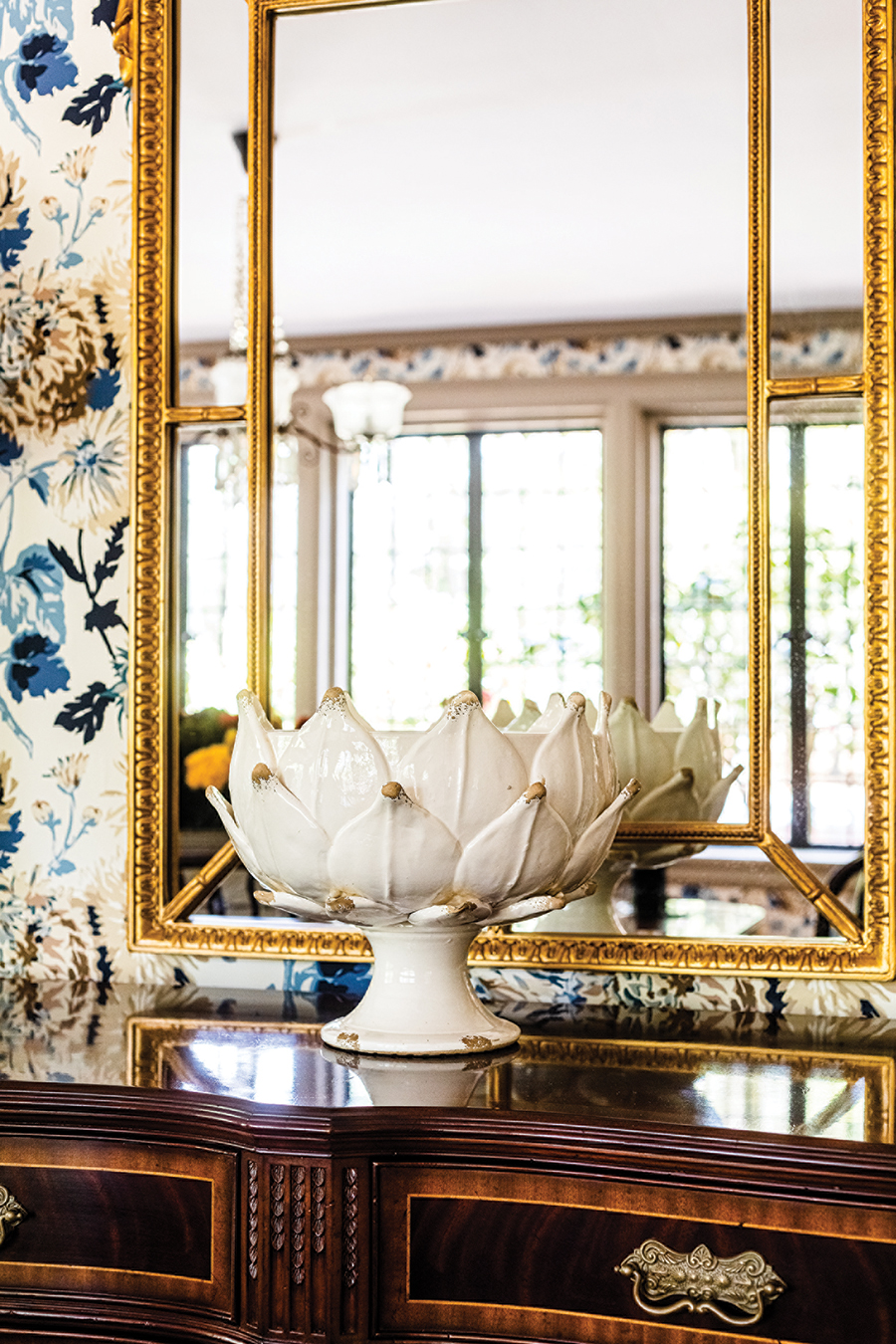 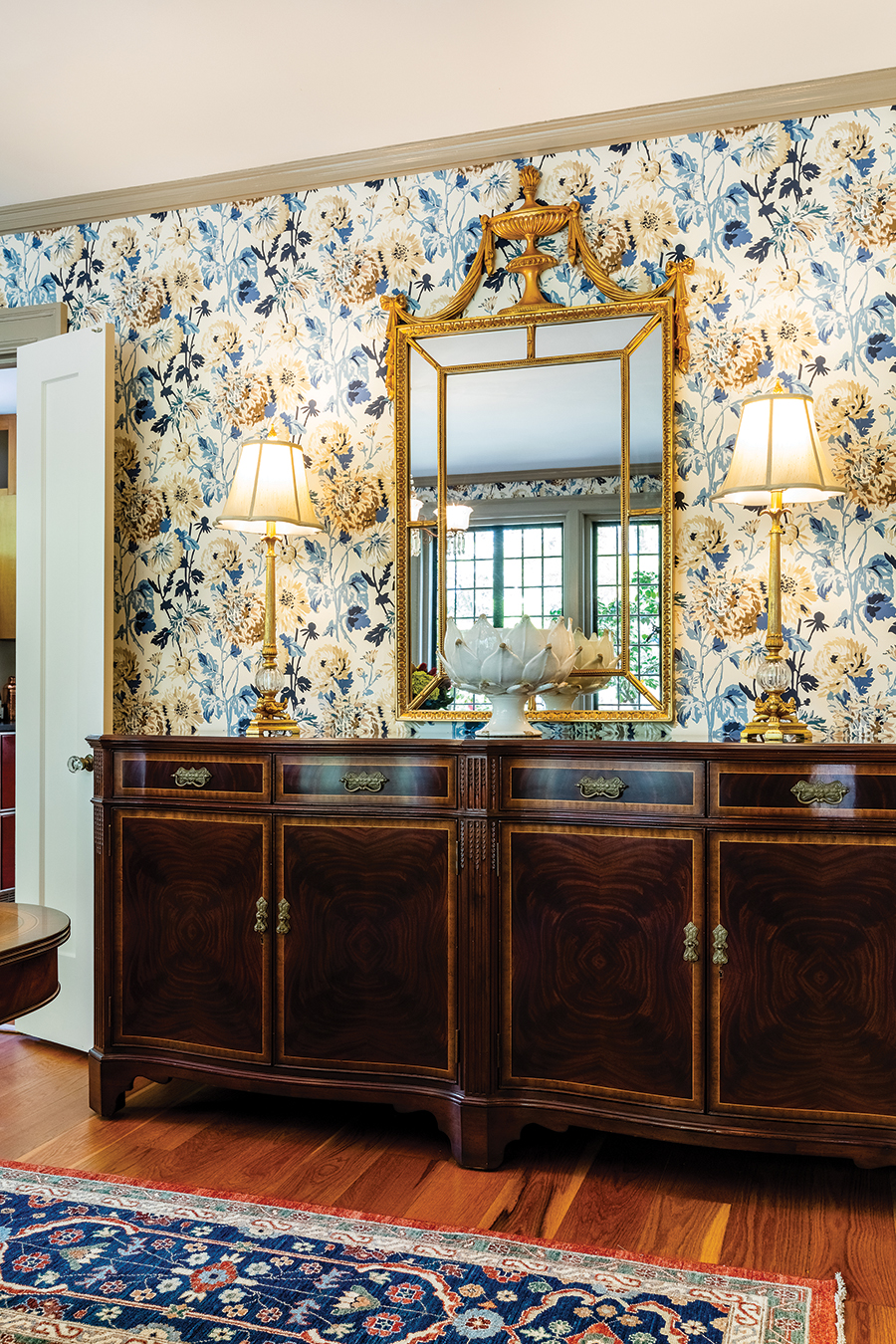 A brick veranda across the back opens out onto a lawn big enough for croquet, should they wish. The house, the garden, the location, the furnishings and paintings, it has fulfilled the new residents’ desire for authenticity, bringing back a period seldom honored — when conversation was among friends, not with Siri; when books were printed on paper and music spun on black vinyl discs. “Everything here is so much more relaxed versus our horse farm,” Glenn says.

“We are a very close family,” Pat adds. “Now we have a house where we can all be together, a house where all the dots have been connected.”

After a deep breath: “I feel like a queen.”  PS