Story Of A House

Living the “love thy neighbors” life 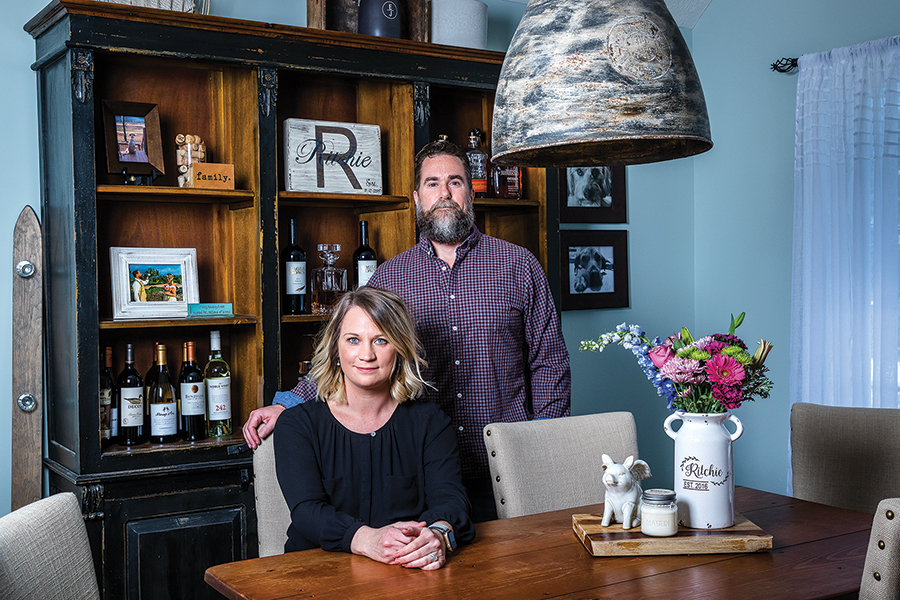 When newlyweds Jennifer and Eric Ritchie renovated and furnished a charmingly unremarkable home on a Pinehurst No. 6 cul-de-sac, they brought absolutely nothing from their previous marriages or homes: no furniture, no memorabilia.

“Not a dish, not even a towel,” Jennifer says. “We know where everything came from and it’s ours.”

They did bring plenty of ideas and the experience Jennifer gained as a Realtor specializing in military relocations. They weren’t planning to occupy the house for long; it would be a buy-and-flip investment. But as the project progressed they fell in love not only with the house but also the neighbors.

“That’s why we stayed,” she explains. Socializing began the day they moved in, when two children arrived bearing cake. Since then, life is a never-ending block party, with holidays celebrated communally. “We visit our families beforehand so we can be here.” Gates were inserted into fences enabling rescue pups Max and Molly to romp with next-door dogs. Their yard became activity central when, to an in-ground pool (raised to 4 1/2 feet uniform depth, for safety) the Ritchies added a stone fireplace beyond the spacious deck. “It’s cinder block and stone, not a kit,” Eric announces proudly. If a ball game is on, no problem. Each outdoor area has a TV. Professional mosquito spraying and two patio heaters encourage year-round comfort.

“We love to entertain,” Jennifer says. More likely 30 friends and colleagues for a barbecue than intimate dinners although with this 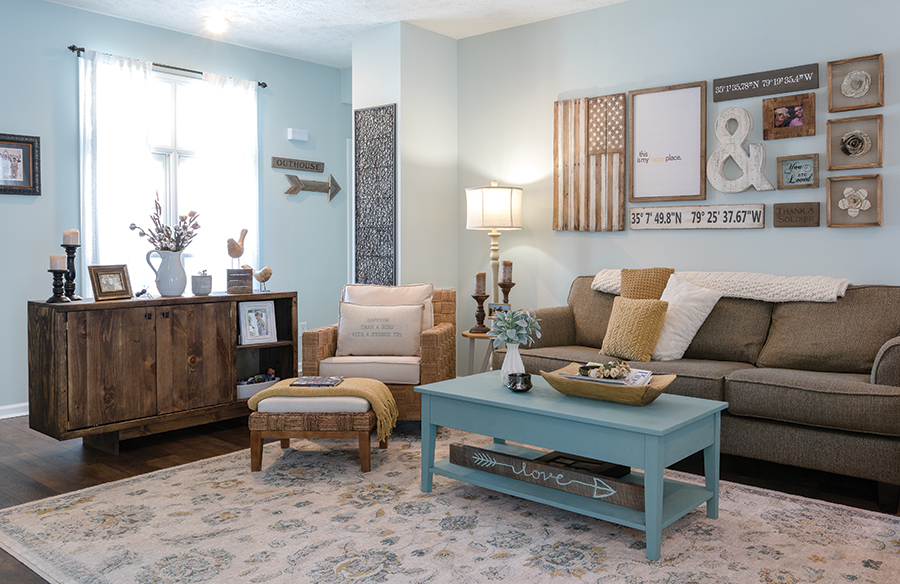 Both Jenn and Eric have military connections. Her father was Army, Eric is a Navy veteran who served in Desert Storm. Neither brings a homestead imprint. She grew up on several bases, including Fort Bragg, and in Ohio. Eric describes his boyhood home in Albemarle as a plain N.C. ranch with dark paneling and a pool. Eric works with tactical communications equipment for the military. Jenn’s experience in real estate honed her eye. This house was on the market for only a day before they grabbed it for over asking price. She could see beyond pink and gold bathrooms and a wet bar in the living room. This house, built in 1996 was in good shape, well-located and priced attractively. The layout suited them: a master bedroom wing with a second bedroom for a joint office, since they both work from home. A guest bedroom on the opposite side for visiting family, including Eric’s 23-year-old son. They removed a Jacuzzi tub from the master bathroom to make room for an oversize shower and installed a floor resembling distressed planks. White paneled kitchen cabinets were retained, granite countertops and a tile backsplash added. Now the room pops, even without the customary Wolf stove and SubZero refrigerator. 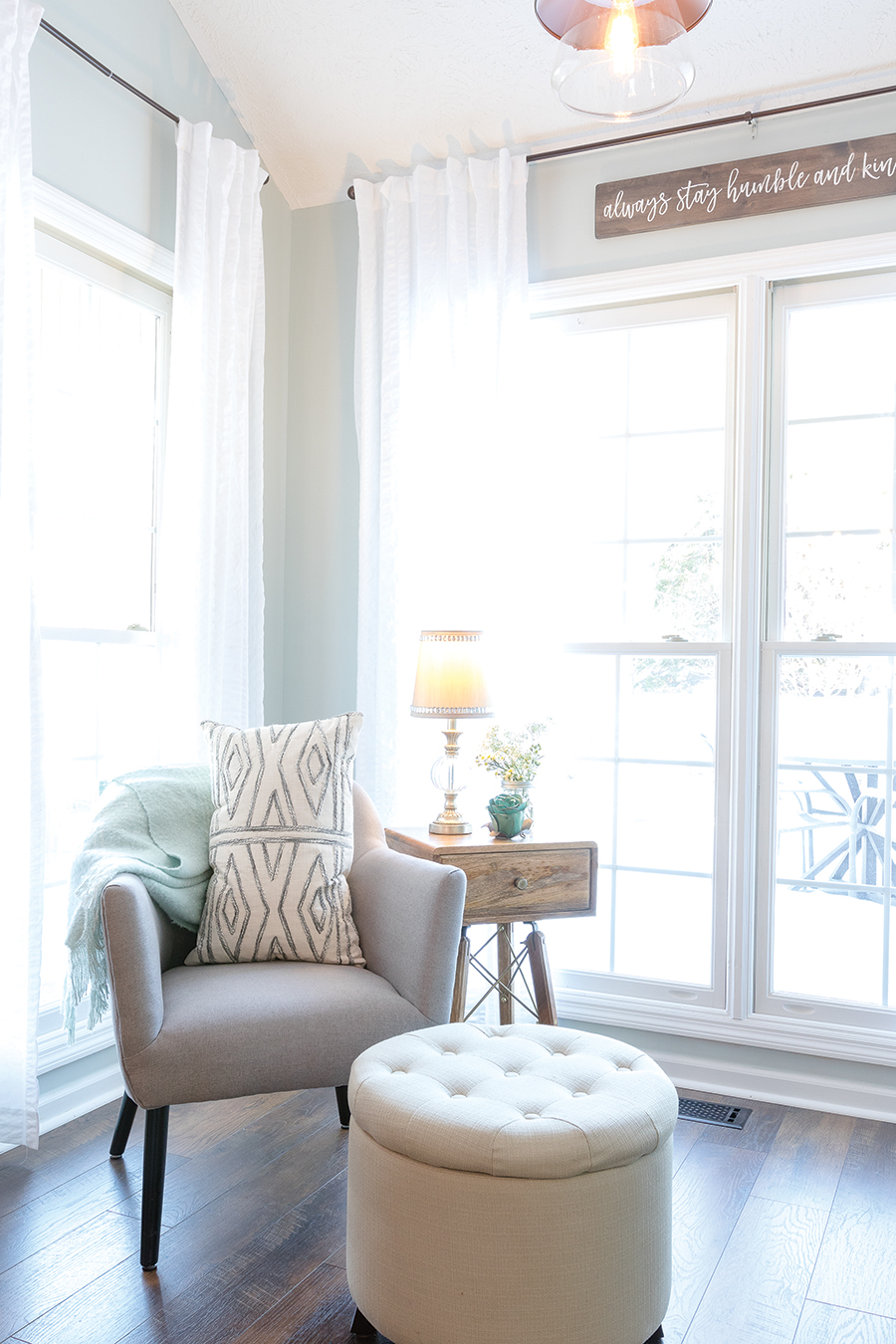 At just under 2,000 square feet spaciousness is created by light streaming through tall paned windows with eyebrow arches.

“Our (previous) house was much bigger but we didn’t need all that space,” Jenn says.

An hour after the closing, workmen were pulling up carpet to install a charcoal grayish engineered wood flooring that not only sets the contemporary tone but is practical with dogs and a pool.

The entire renovation took only 28 days.

So far, so good. Now add personality from a couple unfettered by convention: After planning a wedding at the Fair Barn Jenn and Eric decided to run away to Hawaii and marry on the beach, minus family and friends — which explains the string of numbers and symbols painted on a narrow board hanging from the dining room wall.

“We collect co-ordinates from everywhere we go; these are from Hawaii, where we got married,” Jenn explains. Another strip represents their Pinehurst home.

“I didn’t want it to look like anyone else’s” Eric says.The kitchen pantry door — once half of a French pair — was cut down to fit, with defects left intact. Their king-sized bed 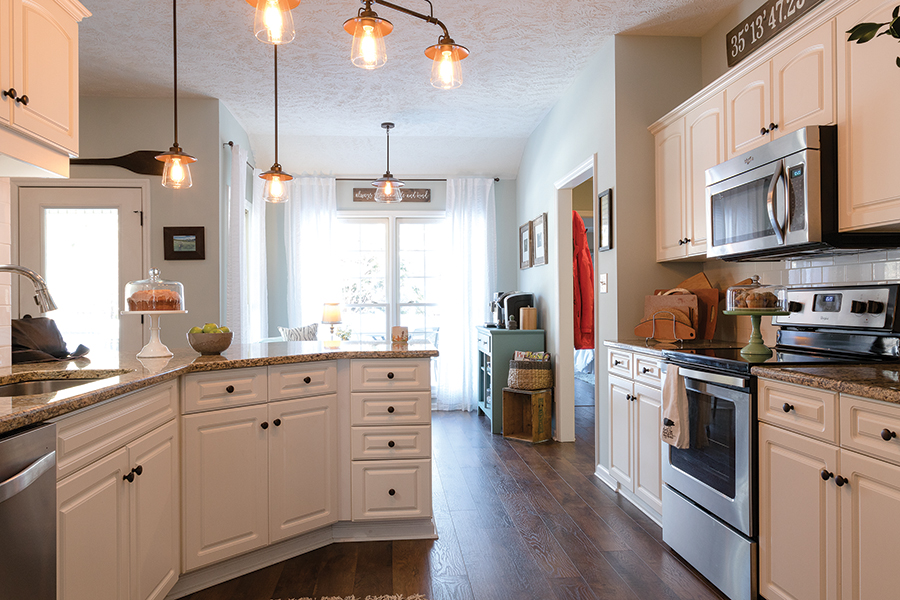 “I show Eric what I see on Pinterest and he does it.”

Because everything is new or freshly rejuvenated — and purchased in a swoop — the appearance could be a Crate & Barrel, Wayfair or Pottery Barn layout. Heavens, no. “Everything’s local,” Jennifer says — some new, some repurposed, many unique pieces from décor shops in Aberdeen where they shopped together on weekends. Growlers (“our ‘thing’”) collected from North Carolina breweries and travels march across a kitchen soffit shelf.

Which leaves the couple’s final stamp — framed signage, slogans, sayings and messages hanging from walls, embroidered on pillows, everywhere. Some are large, in bold print, like ANTIQUES over the guest room sleigh bed. Others are site-appropriate: Happiness is Homemade, in the kitchen. Laundry, over the utility room. Flea Market, Best Day Ever, Eric and Jenn 9-2-16 (wedding) and, sweetly, All You Need is Love. American flag representations appear more than once. Photos of pottery and elephants remind them of a recent trip to Thailand. A giant “R” stands by the front door. 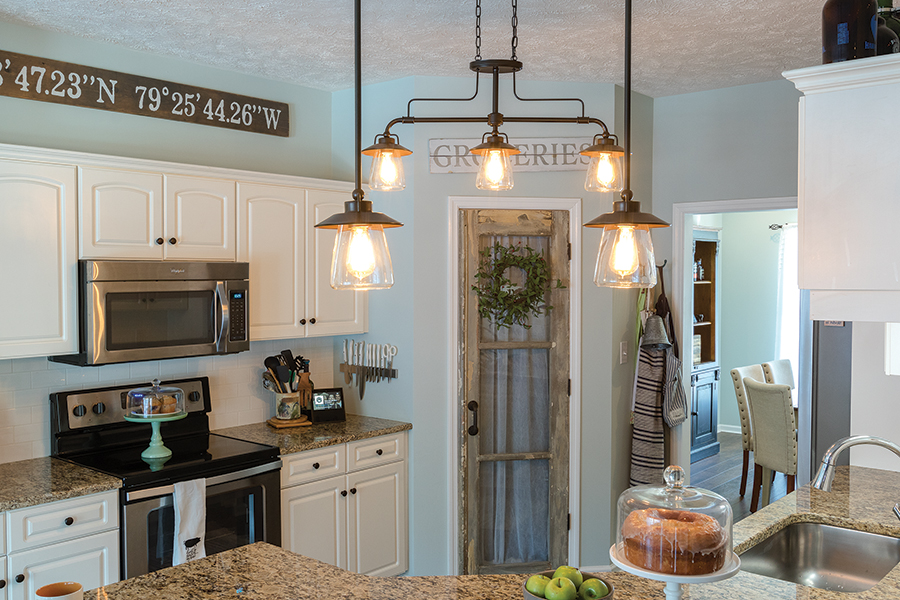 Might this be the only home in Pinehurst fielding but one antique — a plain oak sideboard in the dining room, from Eric’s great-aunt?

This summer they will tackle the exterior . . . maybe a new front door. Jenn wants to paint the brick and put up cedar shutters. She will add shrubs to the crape myrtle and white birch on the half-acre lot.

Obviously, the Tufts family did not build enough Old Town “cottages” to satisfy today’s affluent retiree/renovators. Neither did architect Aymar Embry design sufficient pied-à®-terre in Weymouth to accommodate history buffs. Therefore the great majority of people, many military-connected, who settle in the area need something else. Eric and Jennifer Ritchie found it on a tiny cul-de-sac in a large development of houses priced moderate to more. Their finished product, perfectly “staged,” would sell in a flash, at a substantial profit. Nothing doing.

“If it weren’t for the friendship with neighbors, we wouldn’t still be here,” Eric says. 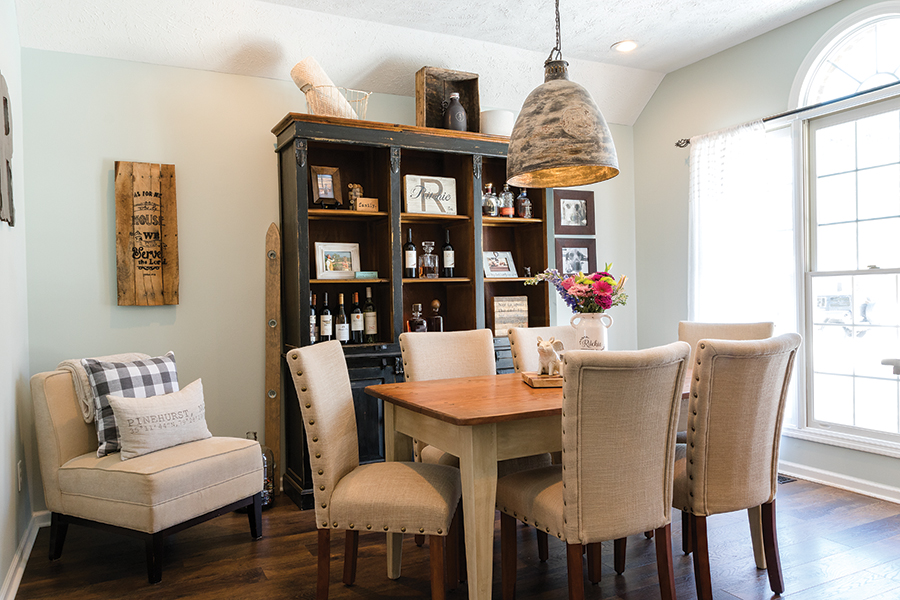