Just because “big” and “beautiful” start with the same letter doesn’t signify a relationship. What could be prettier than a modest house filled — not crowded — with carefully chosen objects, where nothing matches but everything fits?

Should the house and contents also reflect its occupant, bravo.

Virginia Gallagher teaches yoga. She lives yoga. Her artifacts and décor reflect its tenets and practices. Crystals cover many surfaces. She speaks of chakras, the body’s seven energy centers. Even the uninitiateds absorb the calm. 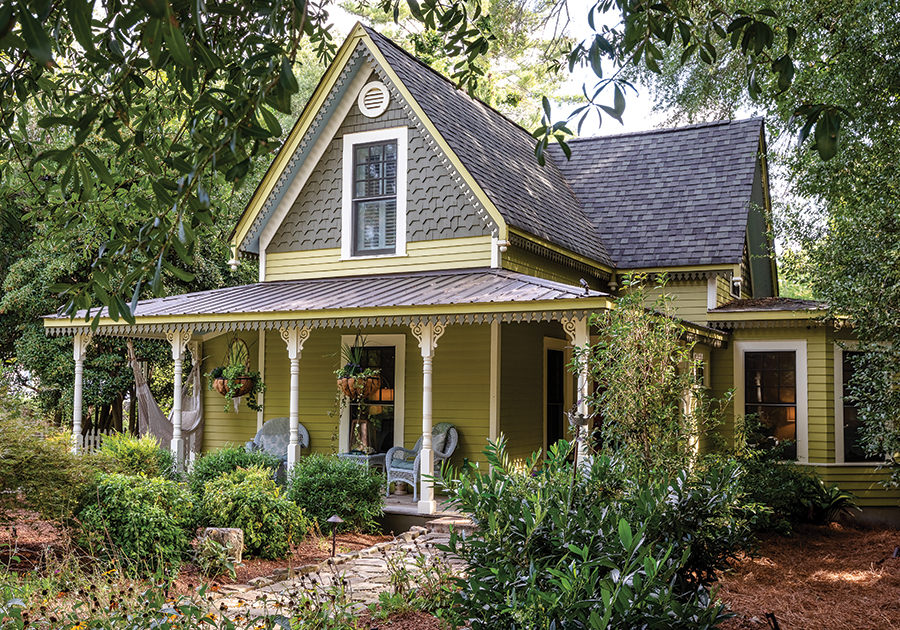 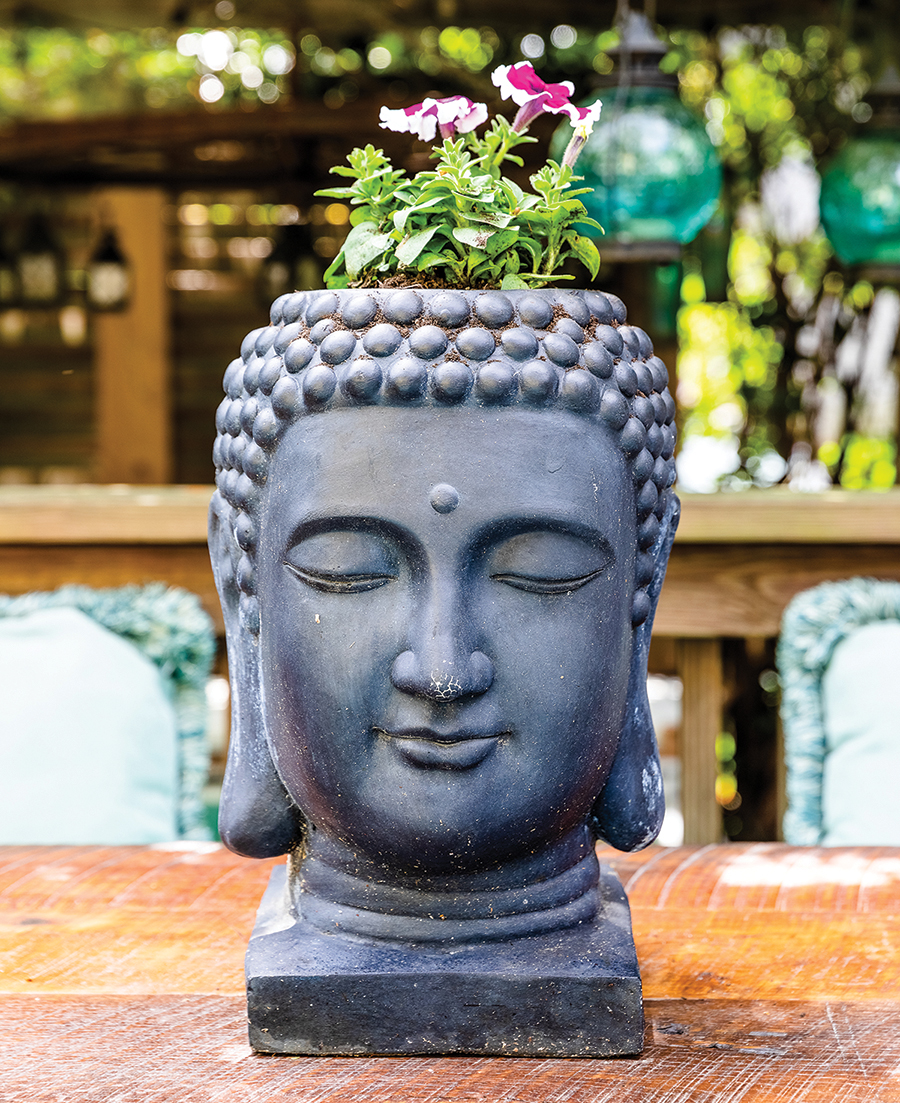 That calm begins on the front walkway, composed of stepping stones, rimmed with perennials, then weed-free grass, where a small sign announces the Enchanted Castle. The clapboards are painted a green south of avocado. Celery, maybe? The front porch ceiling is sky blue, considered a good omen. Hanging from it, a white woven rope hammock from Mexico, where Virginia led an instructors’ retreat. “I love the Mayan culture, the spirituality,” she says.

The foliage attracts birds, which Virginia identifies with a guide kept nearby. Ancient trees and vines shelter the meditation garden from summer’s heat. Gingerbread rims the roof lines of a dwelling built in 1924, according to a brick set into the vestibule floor . . . but by whom? Mother Goose? Lewis Carroll? J.R.R. Tolkien?

Virginia — an adult aficionado of Alice’s wonderland — doesn’t know. Most likely a shopkeeper who appreciated walking to Broad Street as much as Gallagher likes walking to Hot Asana, her teaching studio. However, beware of bricks bearing dates; documents provided by the Moore County Historical Association move construction back to 1895, commissioned by C.T. Patch of Peacham, Vermont, a partner at downtown business Patch & Robinson. Another 20 years would pass before snowbirds and townies of substance hired architects to design fancier cottages uphill from the train tracks.

Then, as now, people kept time by the trains, which bother Virginia not at all. “The sound is comforting,” she says. 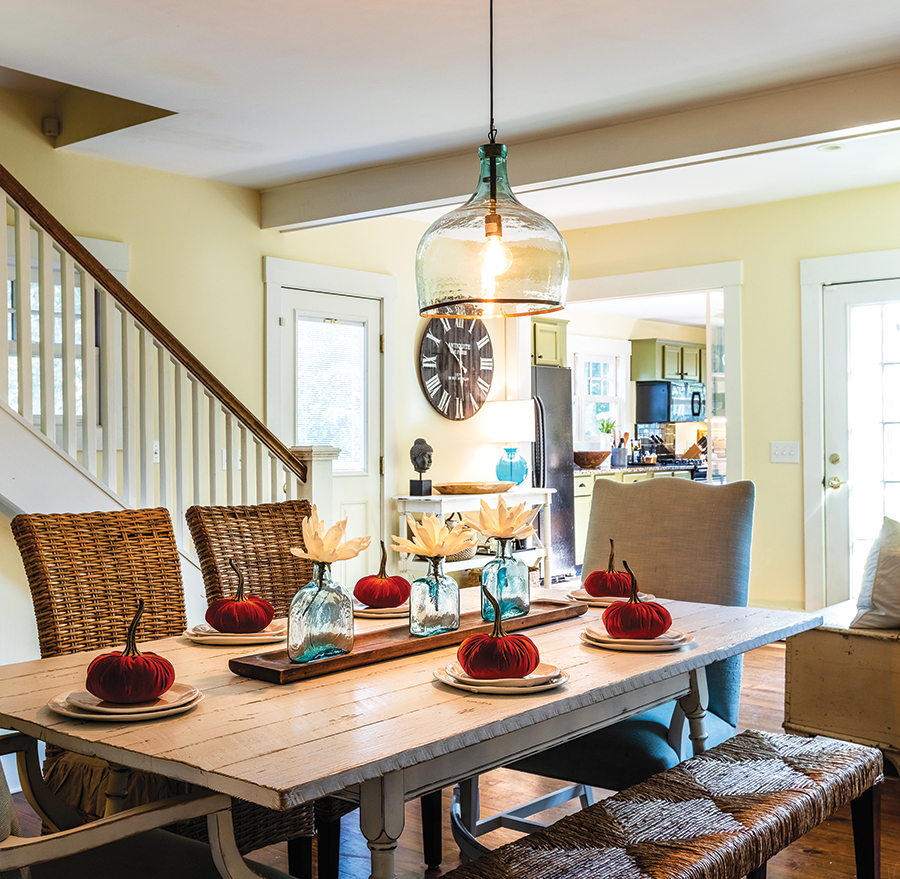 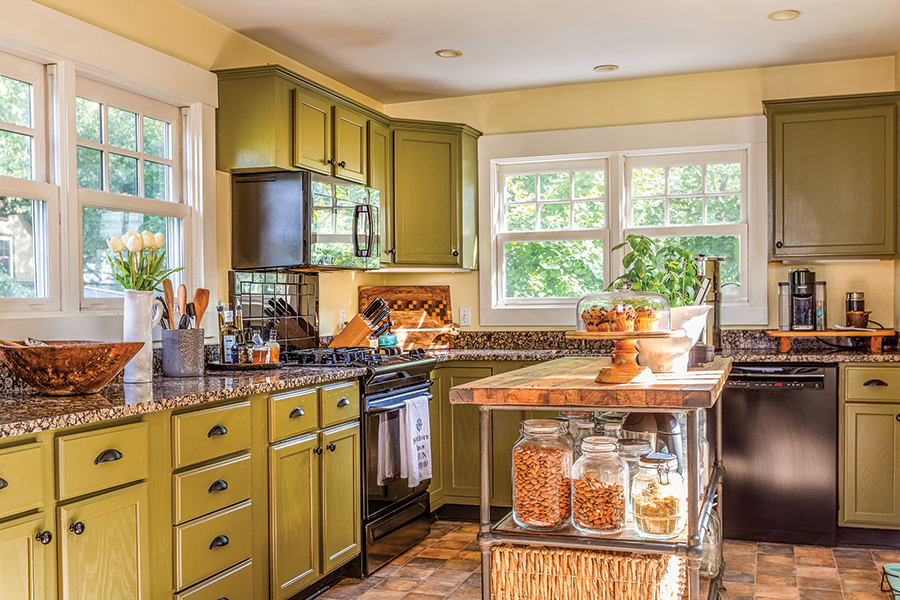 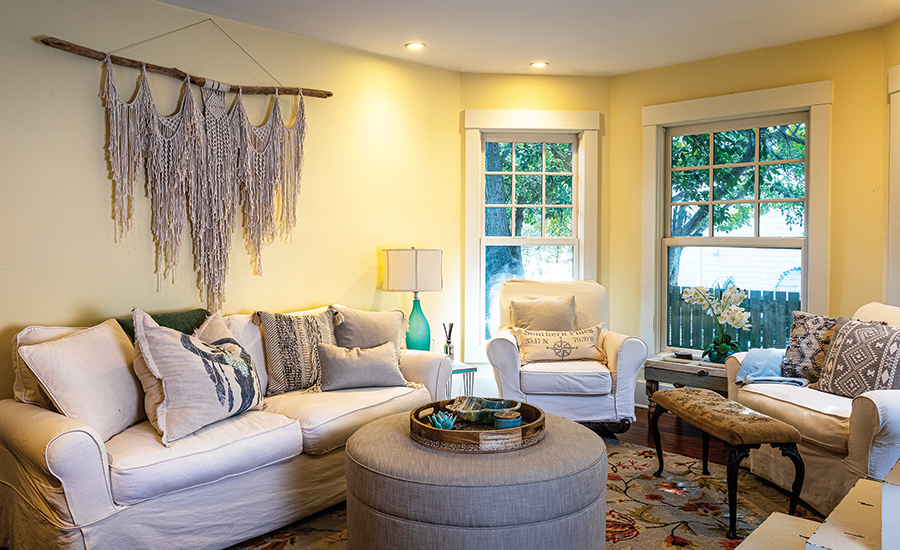 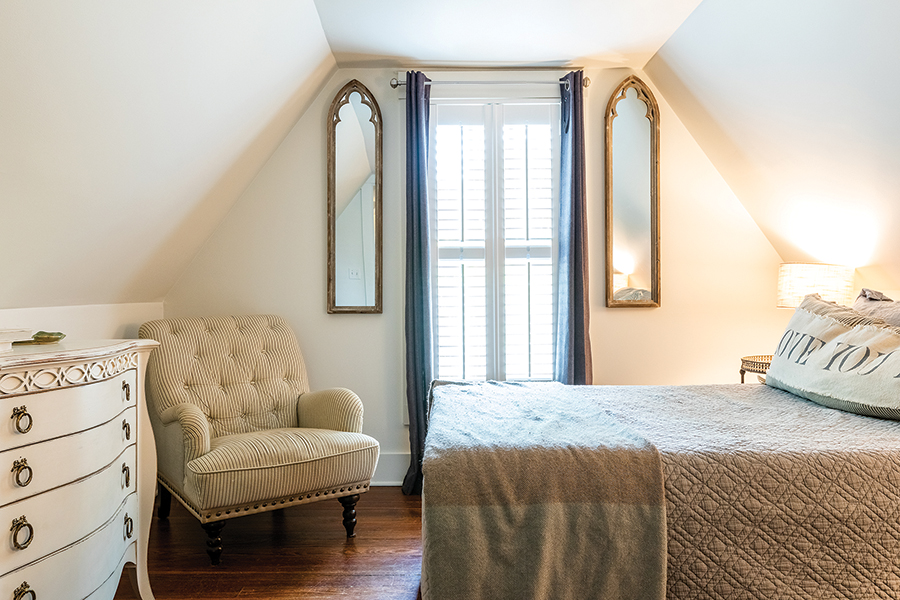 Gallagher’s décor, too, answers to “comfortable.” A pair of upholstered chairs fill her sitting room, with bay window. Everything is child-friendly. Virginia has six. Kevin, a son killed in a tragic accident, is memorialized throughout the house. The others know her door is open — and often take advantage of a “boys’ suite” in the converted attic with slanted ceilings: two bedrooms, a bathroom, a sitting room with TV. Simple. Practical. Comfortable.

This cottage represents Gallagher’s second lifestyle — the first being traditional wife and mother — living in a house fronted by tall pillars in a fashionable neighborhood. Once single, she discovered yoga through a friend: “I was overweight and unhealthy. I went to yoga to get skinny and flexible. After the first class I thought ‘weird,’ and that I’d never do it again.”

That was 2007. Weight loss attributed to the lifestyle captured her mind and body. By 2009 she had become an instructor. In 2010 Virginia opened Hot Asana adjacent to the Sunrise Theater, a short walk away from home. It’s only natural that her house includes a small yoga room where she Zoomed classes during the virus shutdown. 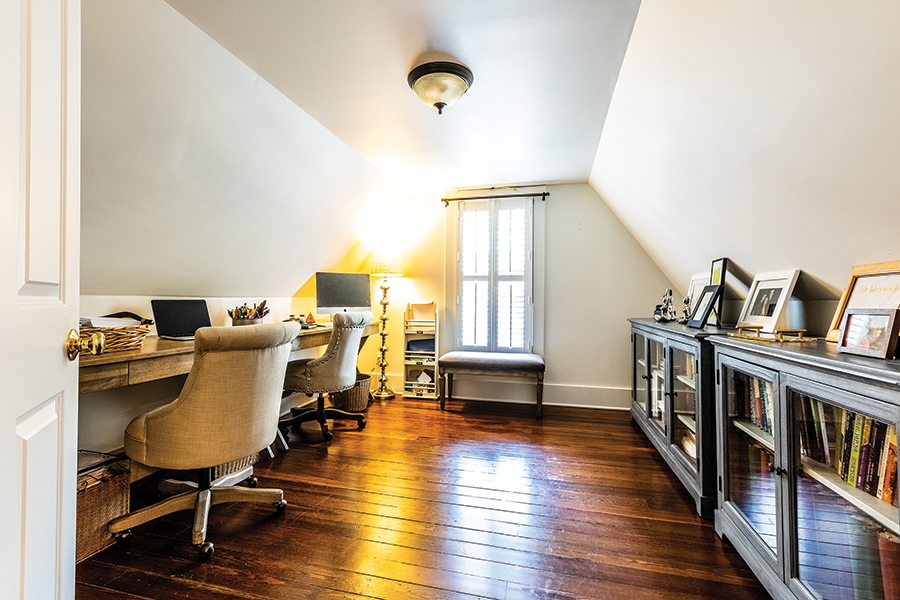 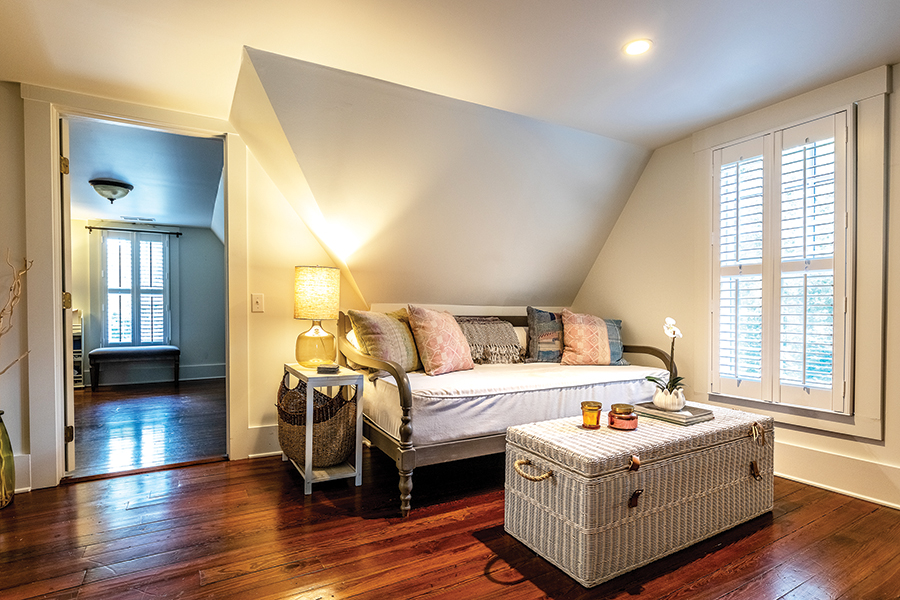 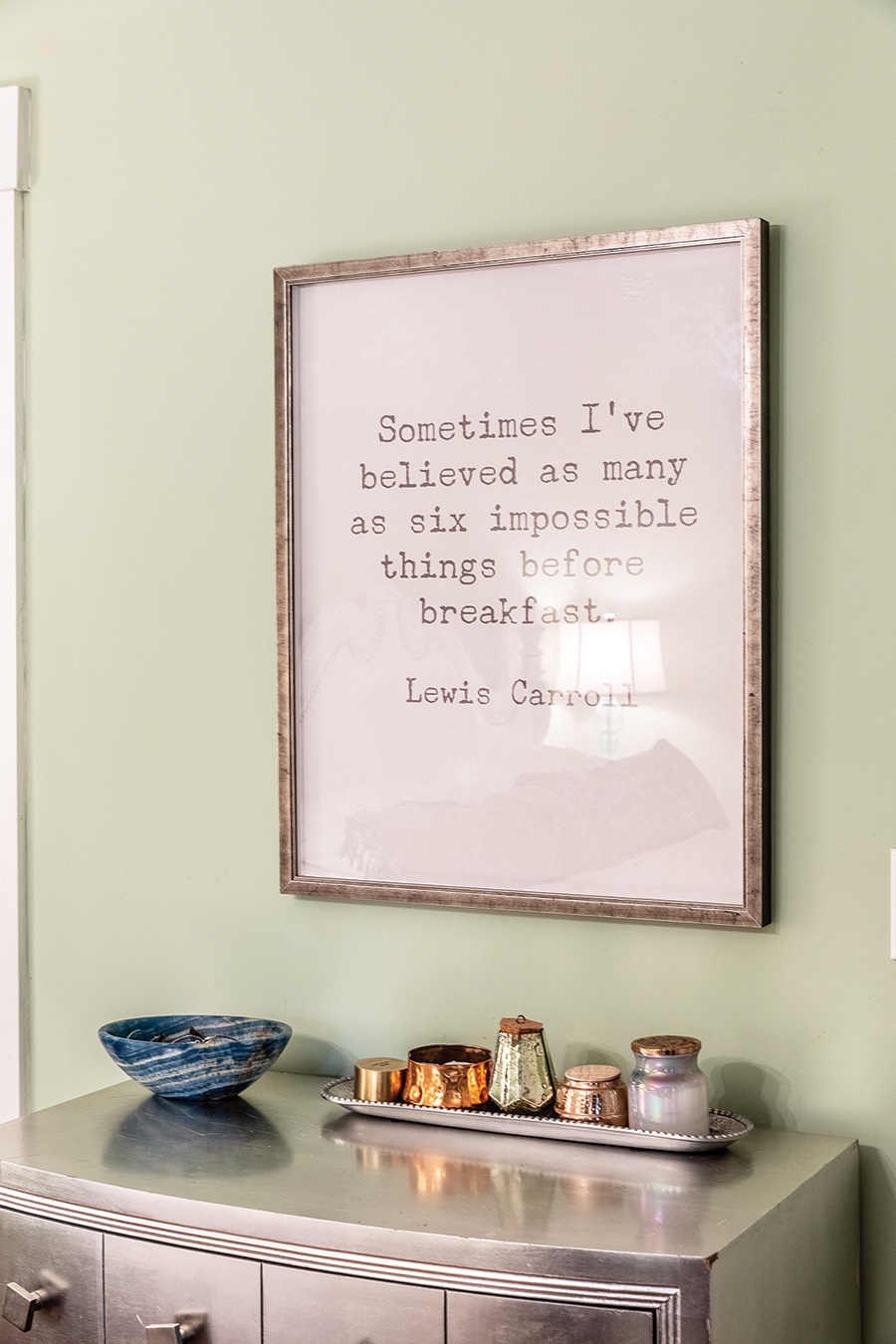 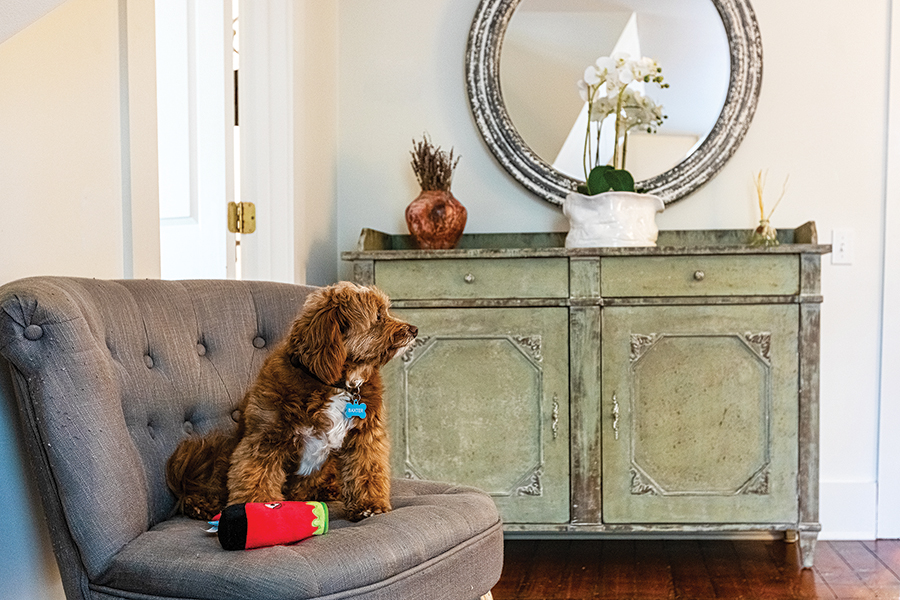 A Southern Pines native and enthusiastic downtowner, Gallagher rented the Enchanted Castle for two years before deciding to buy in 2012. Other possibilities didn’t come with “a story.” Neither did this one so, relying on the presence of previous residents, she made one up.

“I get energy from them,” she says.

Equally gratifying: “This is the first house I ever purchased by myself, with money earned by my own hands and skills.”

Ownership allowed adaptations, not always in the expected places.

“I love a big bathtub,” which wasn’t possible given the long, narrow bathroom that had been added onto her front-facing bedroom. Instead, she installed a hot tub in the fenced backyard. Next, multi-level decks with a trellis-covered dining table, sectional sofas, a swinging bed, gardens with a bubbling fountain shaded by an ancient pin oak, and statue of Kwan Yin, Buddhist goddess of peace and harmony. 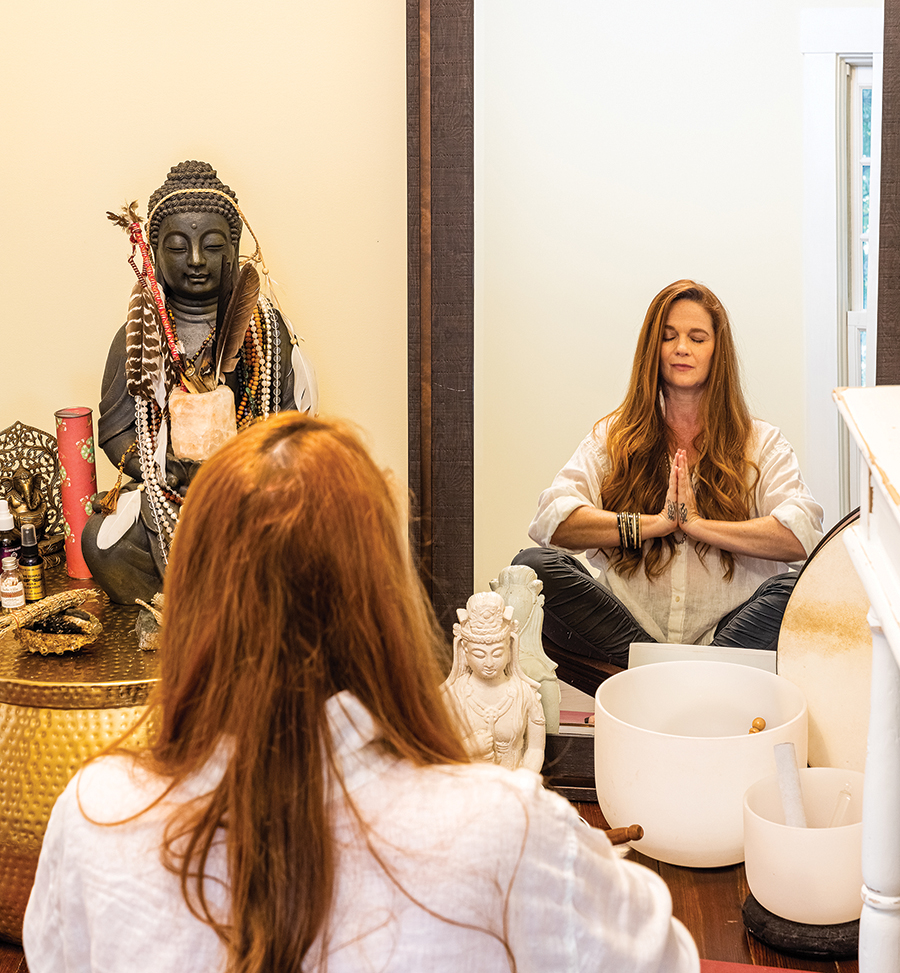 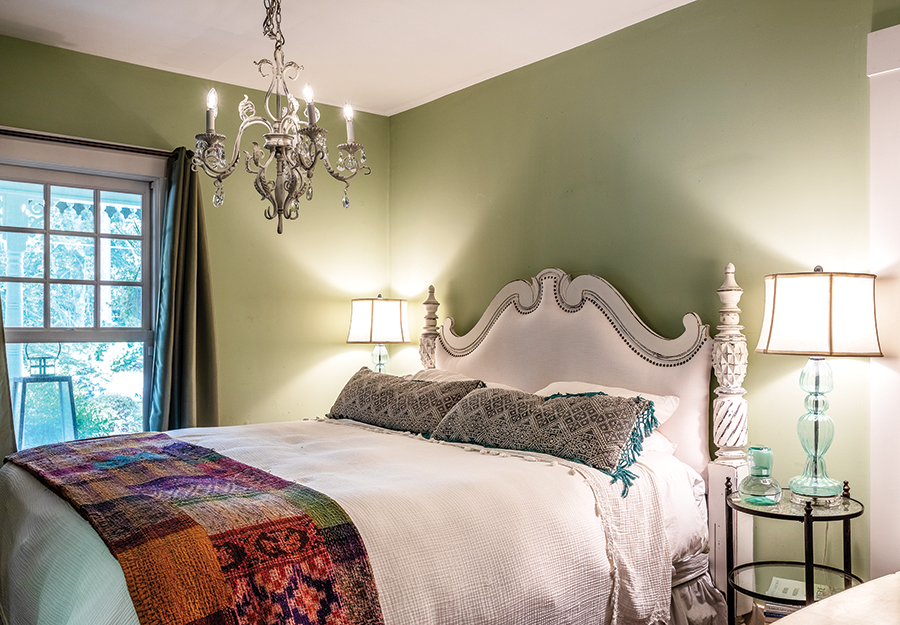 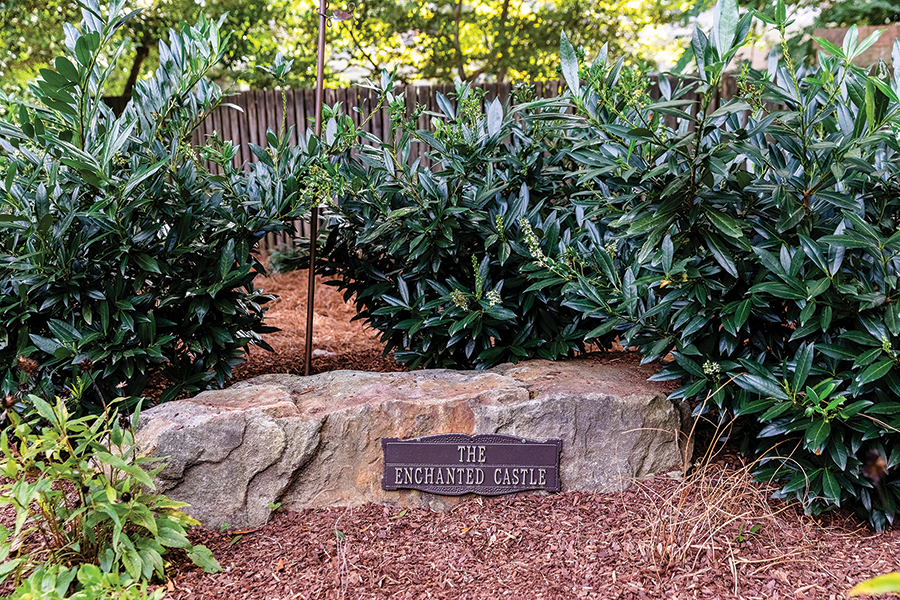 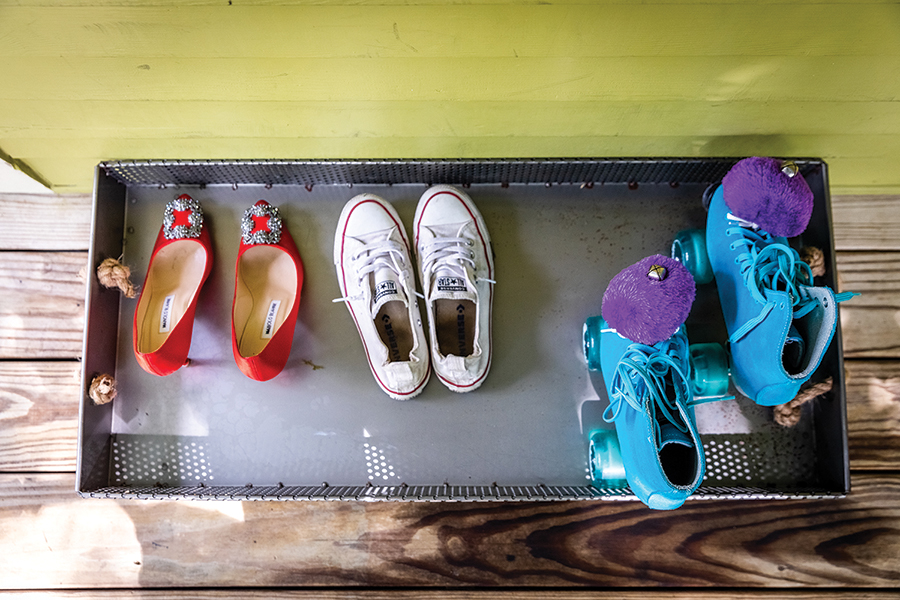 No single word, not even eclectic, describes the interior, with a floorplan that appears to have been rearranged and enlarged, helter-skelter, by previous owners. Opposite the small sitting room is a master bedroom, filled almost entirely by a king-sized bed with elaborate headboard, that looks out onto the front porch. “So I could see how late the kids came home,” Gallagher says. A crystal mini-chandelier hangs over the bed. Her dresser is painted metallic silver, the walls yet another shade of green.

Floors are original pine, stained dark, partially covered by colorful crewel rugs. Throughout, Virginia strives for a feminine presence, something missing in her previous homes.

Beyond the sitting room, walls appear to have been rearranged to create a dining room, large for a cottage of its era. The table, made of distressed wood slats, is surrounded by a variety of seating: bench, upholstered and other chairs. Over it hangs a light fixture built from the top third of an enormous glass water jug hanging by cords emerging from the narrow neck. A contemporary glass china cupboard displays pottery in Virginia’s favorite turquoise. What’s the good of having pretty things if you can’t see them, she explains.

An elongated kitchen attached by a previous owner appears to stretch into tree branches visible through windows on three sides. Even kitchen colors — brown and an earthy green — suggest bark, moss and leaves, rather than white-and-granite glamour. Instead of an island, a long worktable down the center holds glass jars filled with beans and grains and seasonings common to a healthy lifestyle cuisine. 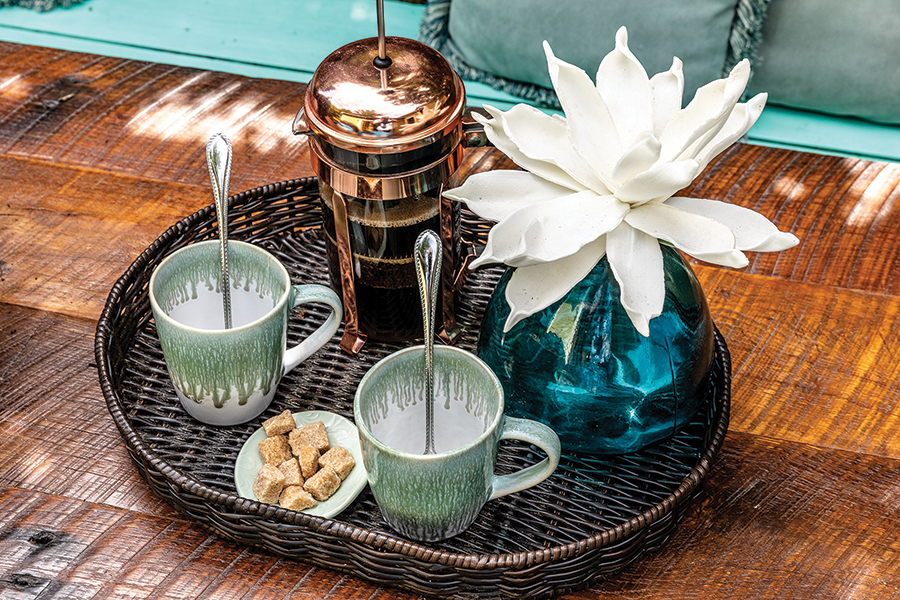 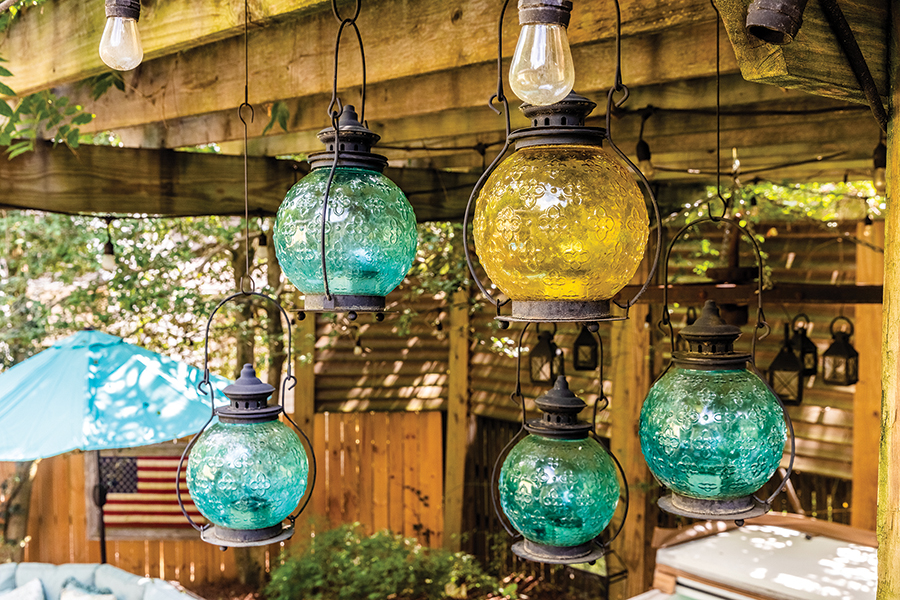 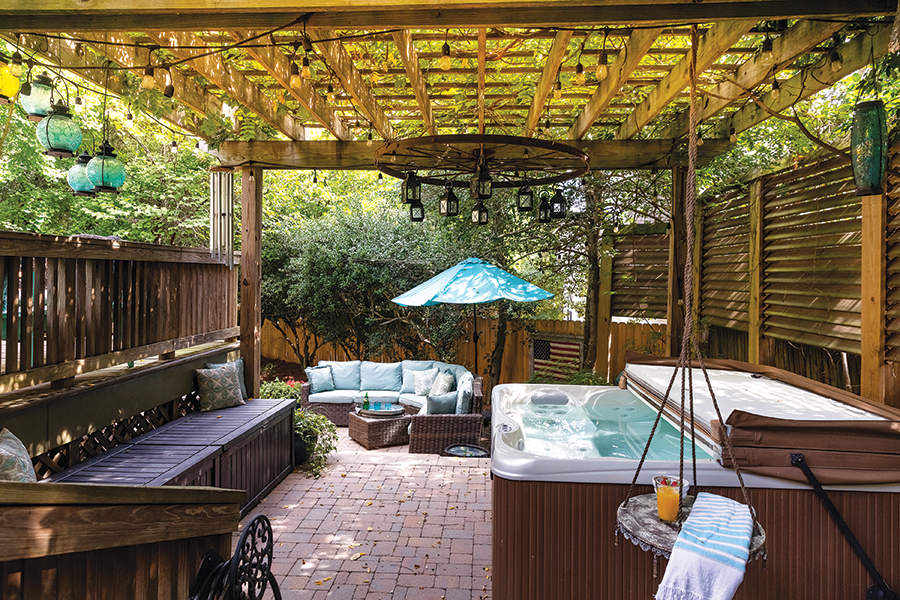 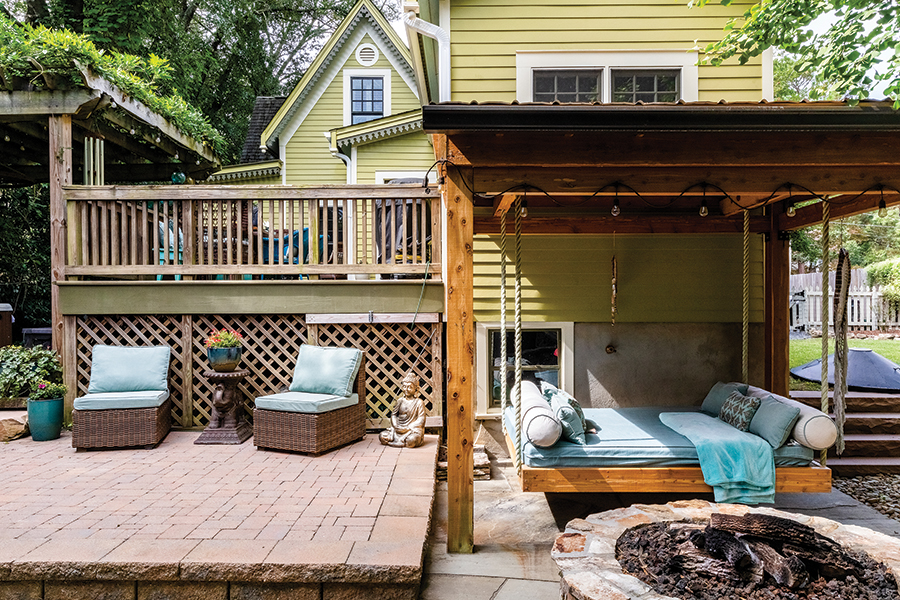 Art is what you make of it. Or what it makes of you. For Virginia, this means framed quotations from favorite books. An enlarged photograph taken in Alaska of horses frolicking through the snow, printed on canvas to resemble a painting, is vaguely mystical — a gift from a friend. A barn quilt pattern hangs outside, in Kevin’s memory. Family members have tattoos in the same design.

Completing the scene are a friendly Toto-dog named Baxter and Luna, a mostly blind marmalade cat.

The template for this serene environment is not completely rooted in yoga. Gallagher grew up in her grandparents’ house in Hamlet, where her grandfather owned the local Coca-Cola plant. “I identify with my grandmother, and their home,” she says. “It had lots of nooks and crannies. I was allowed to touch things. The way it felt was magical.

“I was loved in that home.”

These experiences, past and present, influence her attitudes as well as her living space. “What I learned about yoga is that it helps you feel more comfortable in your body. And home — more comfortable than refined — is a practice of yoga.”  PS 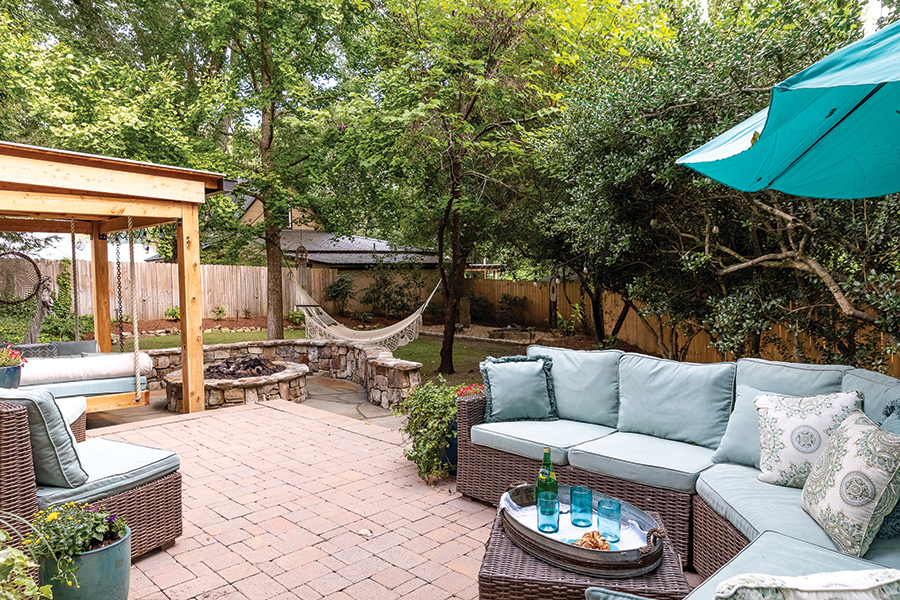 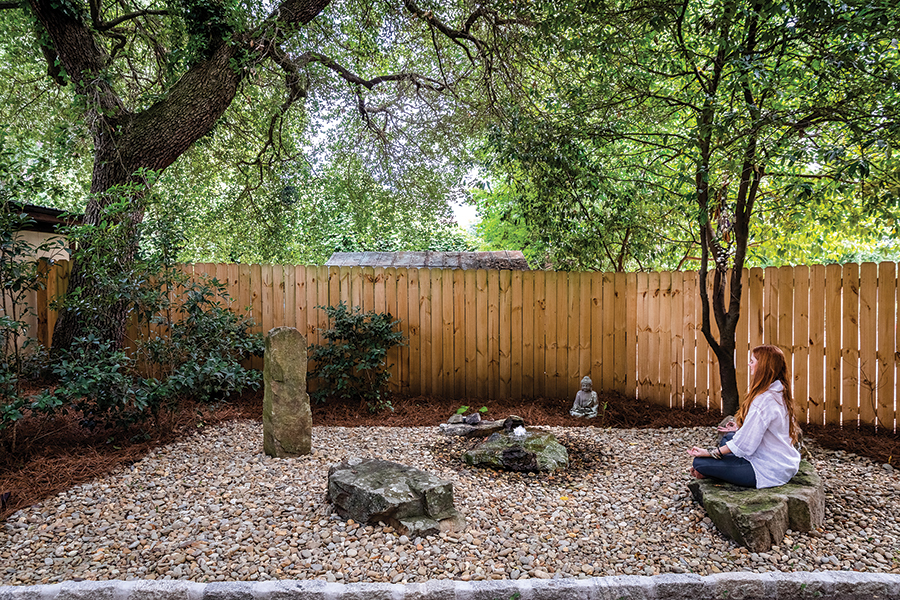 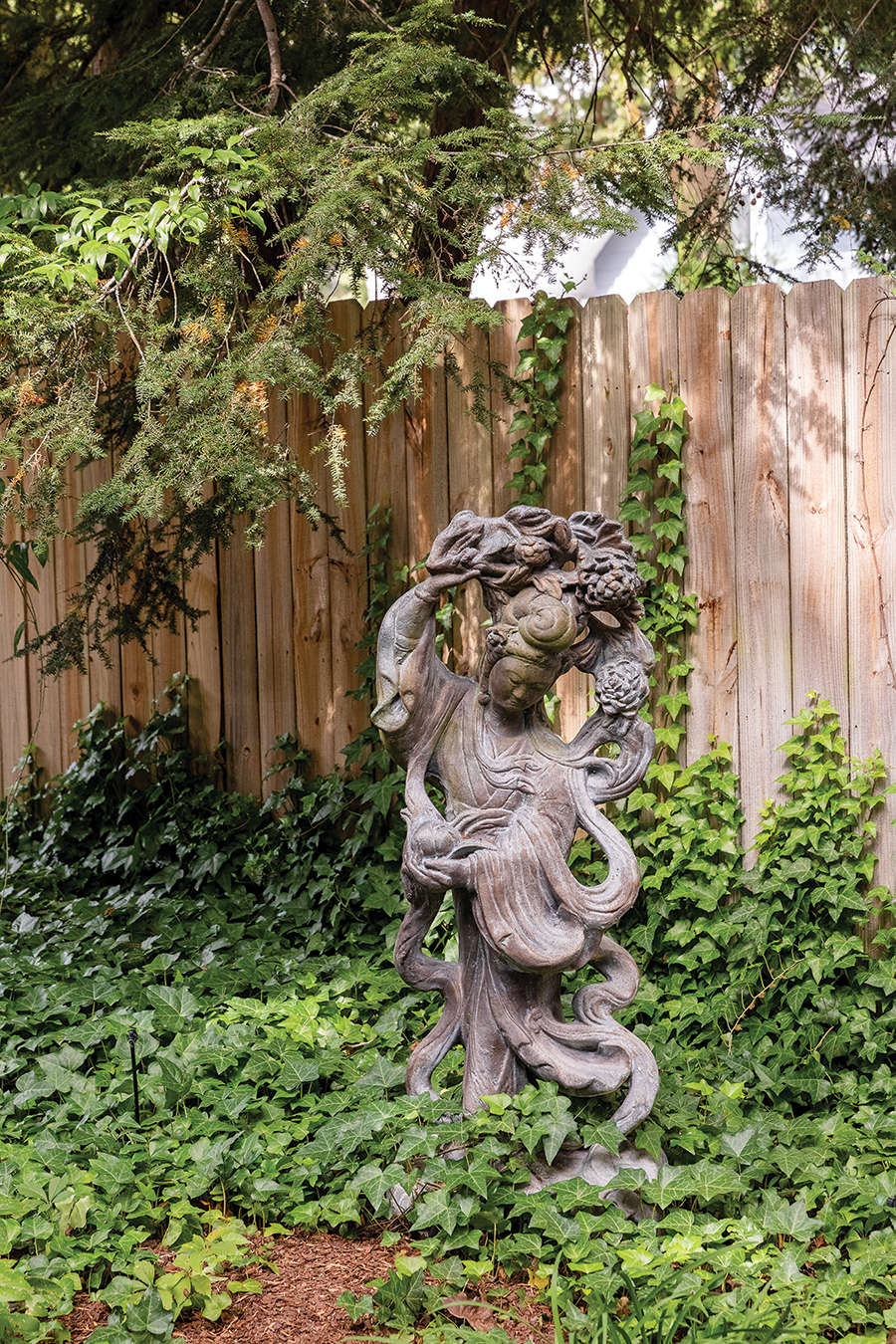