A modern family flourishes in a century-old house

At first glance, the interior of Ashley and David Johnson’s house bordering the Southern Pines Historic District resembles a movie set. A silent movie, of course, since the house was built in 1920. On the walls hang portraits of somebody else’s relatives. Furnishings — a few heirlooms among the reproductions — lean toward weathered leather and dark woods. Beds have metal frames, and sinks look like layouts from Better Homes and Gardens, first published in 1922. Instead of native heart pine, the unusually narrow floorboards revealed under layers of carpet and linoleum are oak, signaling . . . what?

Obviously, the Johnsons are sticklers for the authentic, continually sleuthing used furniture stores and architectural salvage warehouses. Because, as Stephen King wrote, “Sooner or later, everything old is new again.” That applies to push-button light switches enjoying a revival throughout the Johnson homestead.

Time was, young couples with growing families wanted new houses tricked out in the latest gadgets. In the extreme, this spawned “smart” homes with Siri and Alexa calling the shots. Ashley and David missed that trope. They represent a group intent on reproducing the past, within reason, financed by sweat equity. Nobody shuns air conditioning or dishwashers, decks or gas grills. But the Johnsons don’t mind occupying a work-in-progress with their five home-schooled children, ages 5 to 13, and an adolescent Great Dane named Odysseus, whose blue-gray coat matches the kitchen cabinets. Like almost everything else, these handsome cabinets were wrought by David, meaning that if a molding or door frame needed replacing, he would reproduce it. 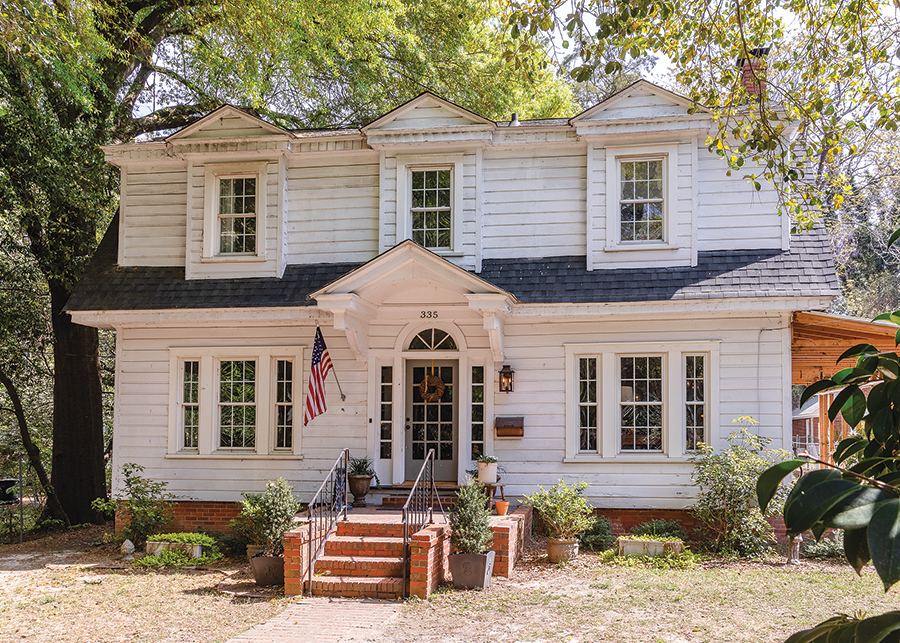 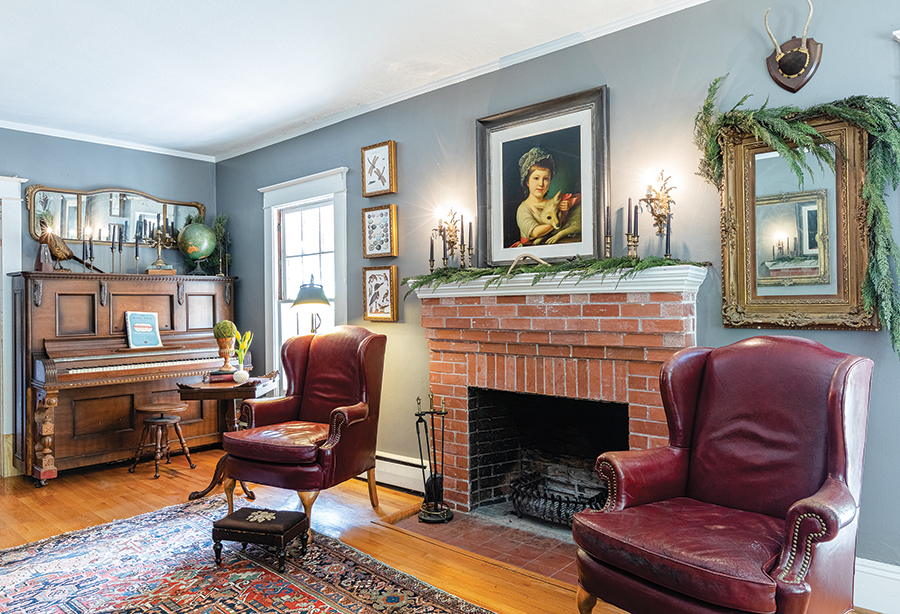 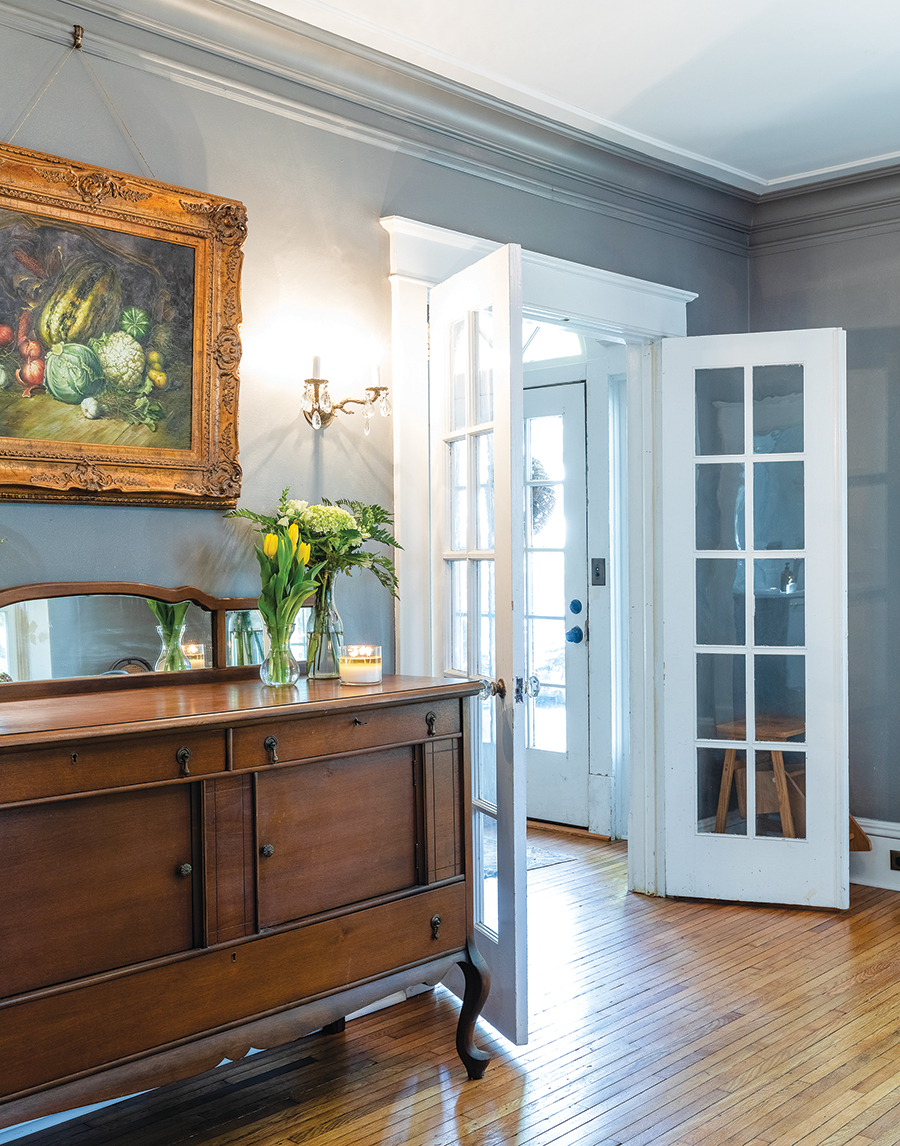 A winding but not unfamiliar road led them to this project, which they hope to complete by 2024. “My five-year plan,” David calls it.

Ashley grew up in a historic home in Charleston renovated by her father, David, on a farm in western Canada. He learned carpentry and construction from his father, a general contractor. Ashley studied design. Both come from moderately large, home-schooled families.

David joined the military, and while at Fort Bragg, spent a weekend in Charleston, where he met Ashley through her brother, at a home-school event. After their marriage, David was stationed in Colorado until their infant daughter was diagnosed with cancer. The military approved a compassionate relocation to Moore County, which was closer to Ashley’s family, and Duke, where Payton, now 12, received chemotherapy.

First they rented a home in Seven Lakes, but as “doers,” wanted their own place. They found it while talking to the Levy family, owners of the Toy Shop in downtown Southern Pines and this cottage.

Little is known of the house built during the pre-Depression boom except a general description from the National Register of Historic Places, which “attributes” the design to architect Aymar Embury II, an active participant in the growth and popularity of Southern Pines. “Dutch Colonial style, distinguished by gambrel roofs, shed dormers, German siding,” it reads. No occupants are listed, suggesting spec-built.

With few photos available, the Johnsons went to work researching or imagining what once was. They decided to alter the footprint as little as possible. Then, two days after they moved in, David was deployed for six months.

“While he was gone I did some painting,” Ashley says. And planning, since nothing inspires renovation more than occupation. Otherwise, the six of them “just hung out.” 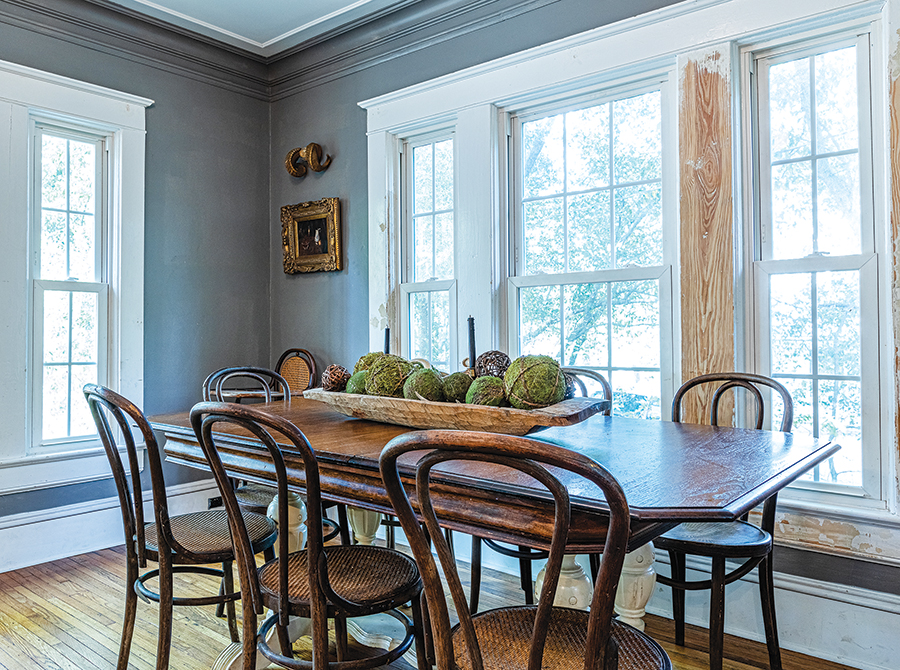 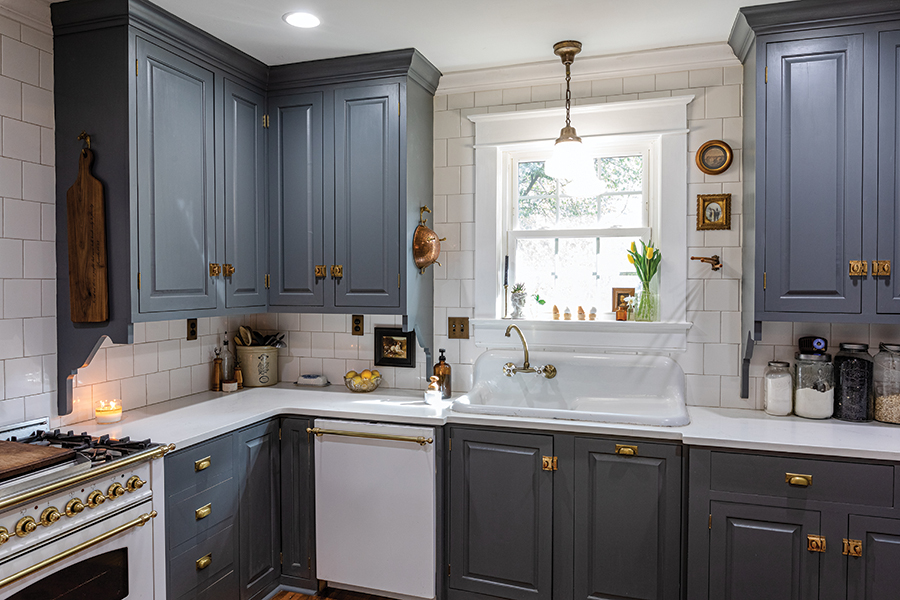 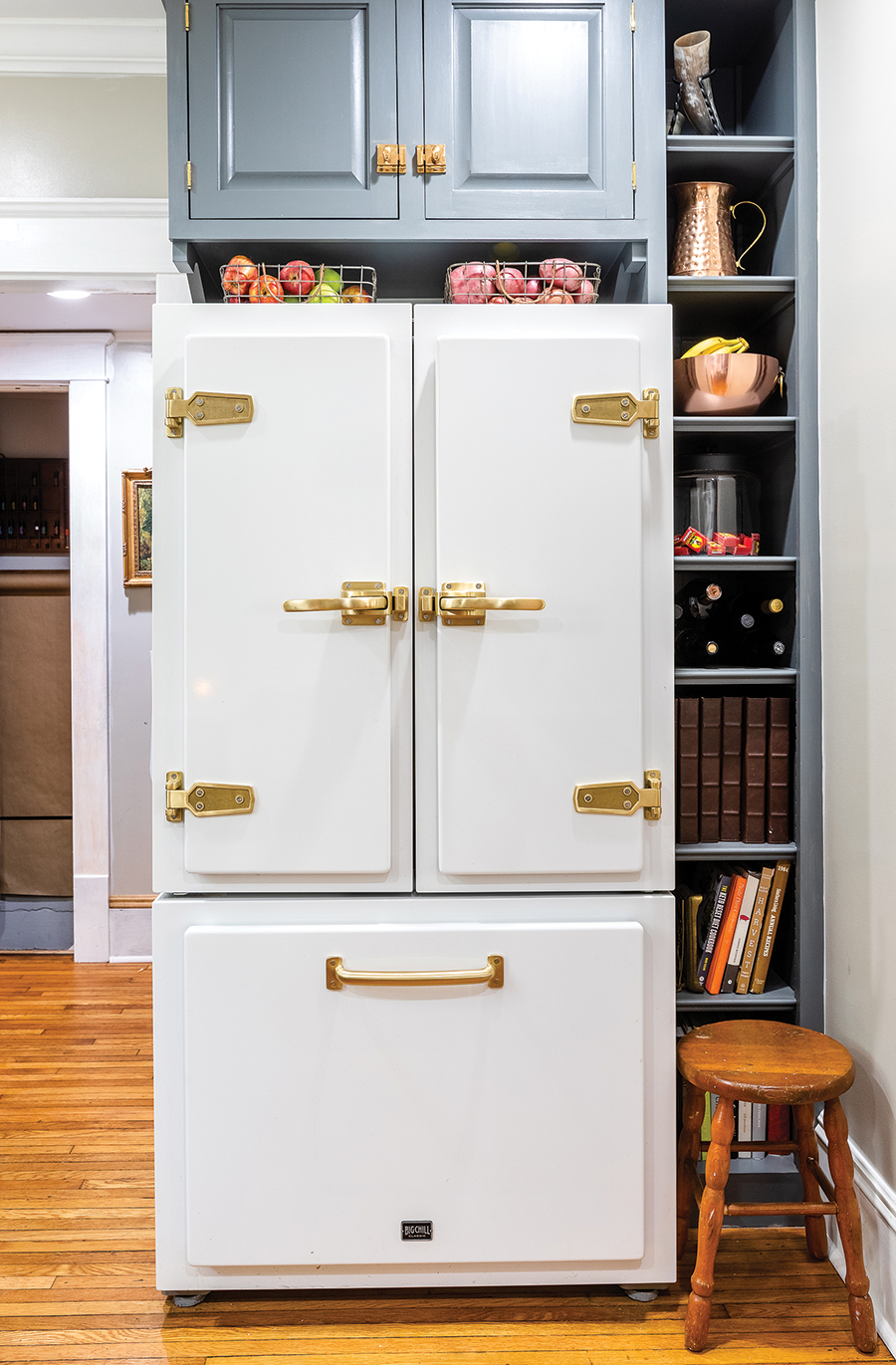 After David returned, the first thing they tackled was the master bedroom, previously pine-paneled, located just beyond the living room, with plumbing for a shower in between. Off came the paneling, on went vivid blue paint. Ashley liked the look of a fireplace, so David assembled a decorative one, with an antique grate and mantel but no chimney. A tiny bathroom with window became their closet-dressing room while the larger existing closet became a bathroom.

Next, they tackled the floors. Those narrow oak boards were removed, very carefully, a subfloor laid, the strips retuned and refinished. Their older kids helped pull up the nails. A door between kitchen and dining room was widened, and the front hall coat closet is now a powder room.

Ashley’s hunt for furnishings and period décor is ongoing. Nothing matches, everything relates. “I’m obsessed with antlers,” she admits. Several pairs hang from the parlor wall along with hunt-themed prints and a boar’s head bagged by somebody else. The sofa is leather; a massive spinet and son Holden’s cello anchor the music corner.

Ladies in long skirts and corseted bodices (not Roaring ’20s flappers) would look quite at home taking tea here.

The children sleep upstairs. Do the math: five kids, two bedrooms. (A third is being renovated as a guest room.) The boys, Holden, 9, and Gunnarr, 7, occupy bunk beds in the smaller room, while daughters Payton, 12, Haydanne, 13, and Charlotte, 5, have the original, long, sun-splashed master bedroom, with three frilly white beds lined up dorm-style. The five share a typically ’30s black-and-white bathroom. 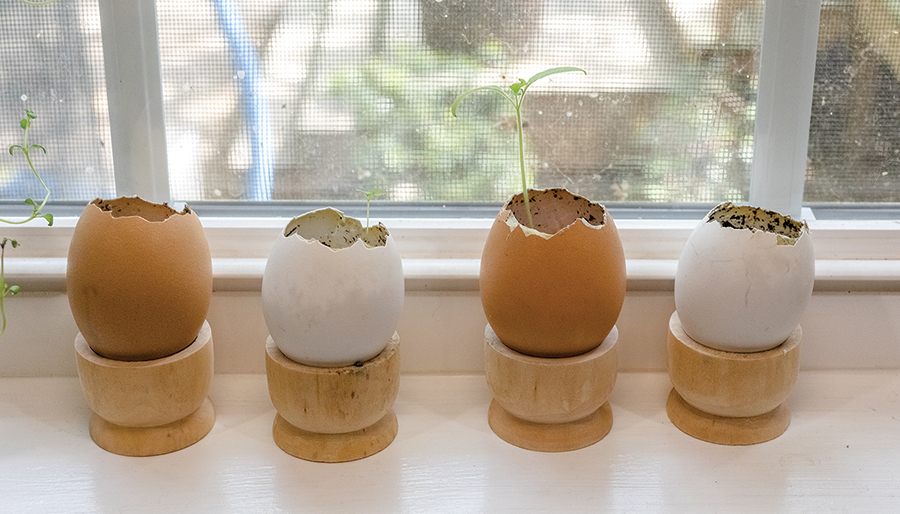 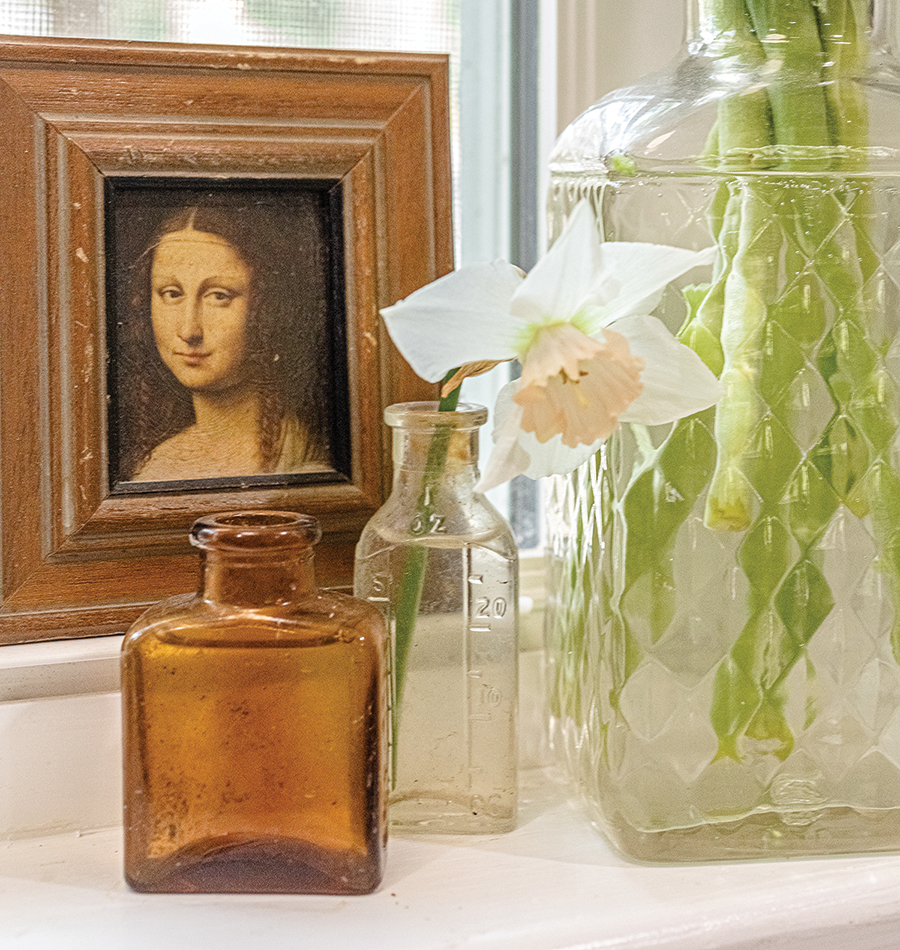 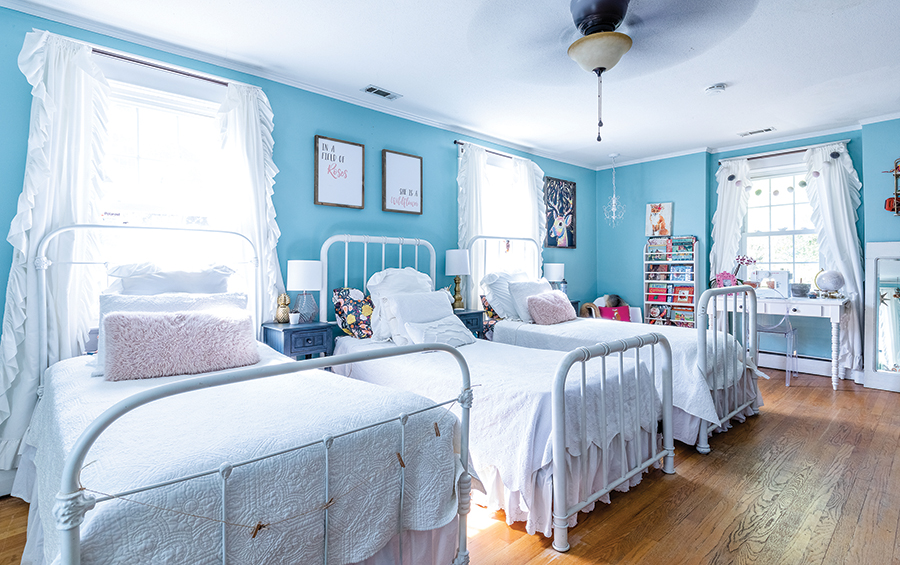 Ashley concedes that this arrangement may change as the girls become teenagers.

The Johnsons eat all their meals in the dining room, sparsely furnished with a long narrow table, bentwood chairs (another of Ashley’s obsessions) and a sideboard.

Nowhere is the couple’s ingenuity better displayed than in the kitchen of moderate size with a refrigerator made by The Big Chill, resembling an old-timey icebox on steroids. A brass rod added to the dishwasher matches fittings on the gas stove. Instead of a range hood David installed an exhaust fan behind a classic wall grate over the stove. A friend offered them the ancient porcelain sink, just worn enough to confirm its age.

At the back door, a clam-shell sink from Ashley’s Charleston home encourages the kids to wash up after playing outside.

Restoration stops at the large deck on stilts overlooking the fenced (for Odysseus) yard and chicken-duck coop, which the girls helped build. 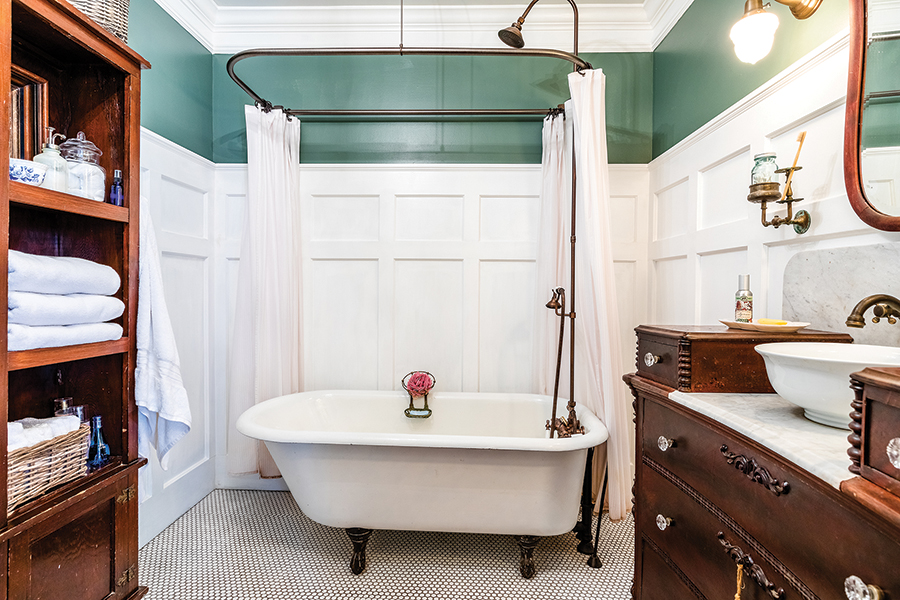 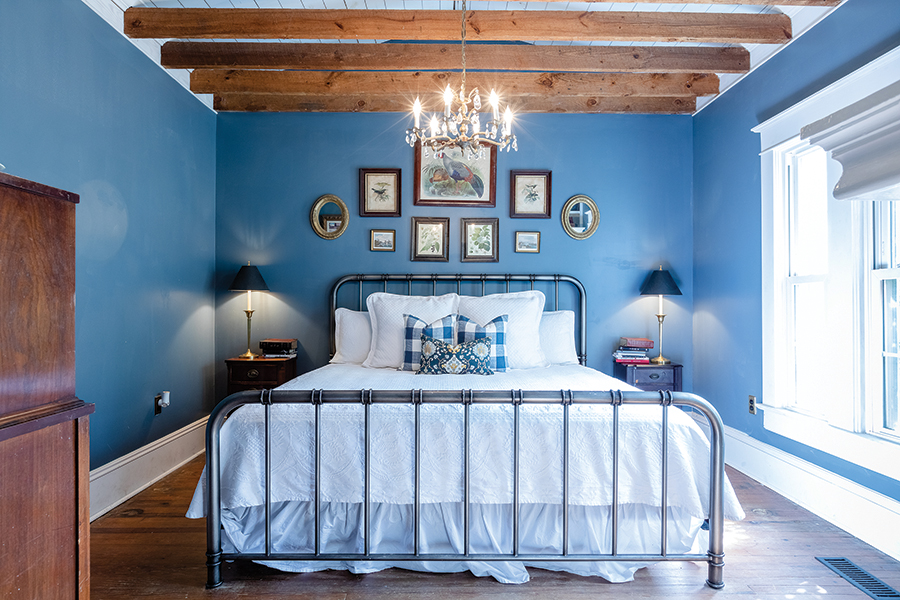 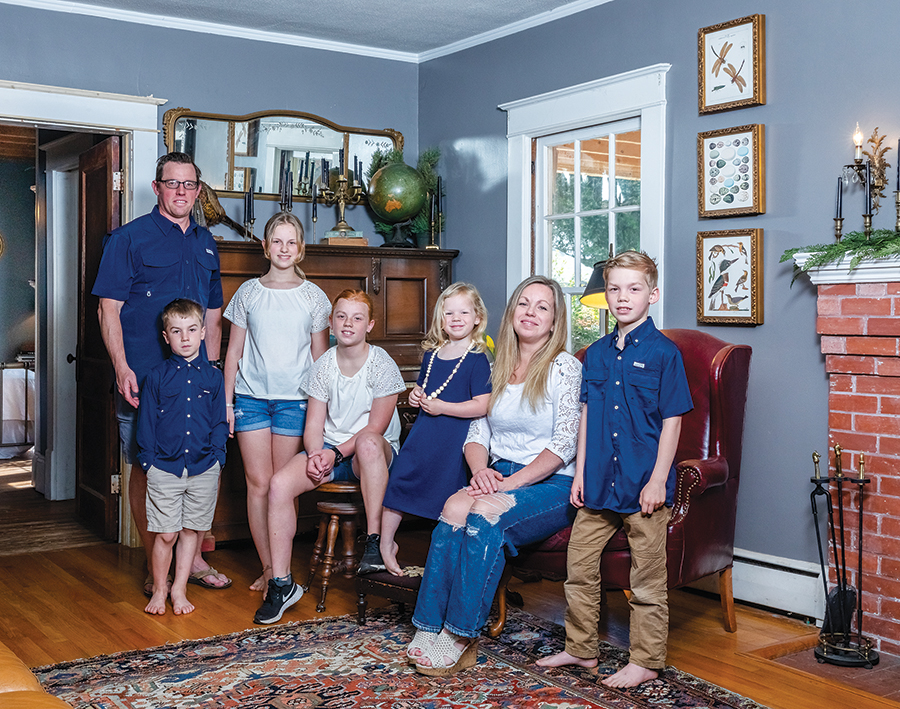 Few cottages of that era had basements. The Johnson family needed one. Here, down a narrow, steep flight of stairs, the children sit at desks while being schooled by Ashley — also a play area with TV (watched sparingly), a laundry nook and fitness equipment.

Somehow, by allocating every inch of space, seven people fit into 2,400 square feet without crowding or clutter. “This is big. The house we moved out of was 1,500 square feet,” Ashley recalls.

The work-in-progress is also an experiment. When David leaves the military he plans to consolidate his research and construction expertise along with Ashley’s design skills into a business focusing on turn-of-the-century homes.

Which still begs the question: For an active young family, why is old better than new?

“The history and craftsmanship, the beauty and design,” Ashley answers. “And the simpler lifestyle is good for our family.”  PS 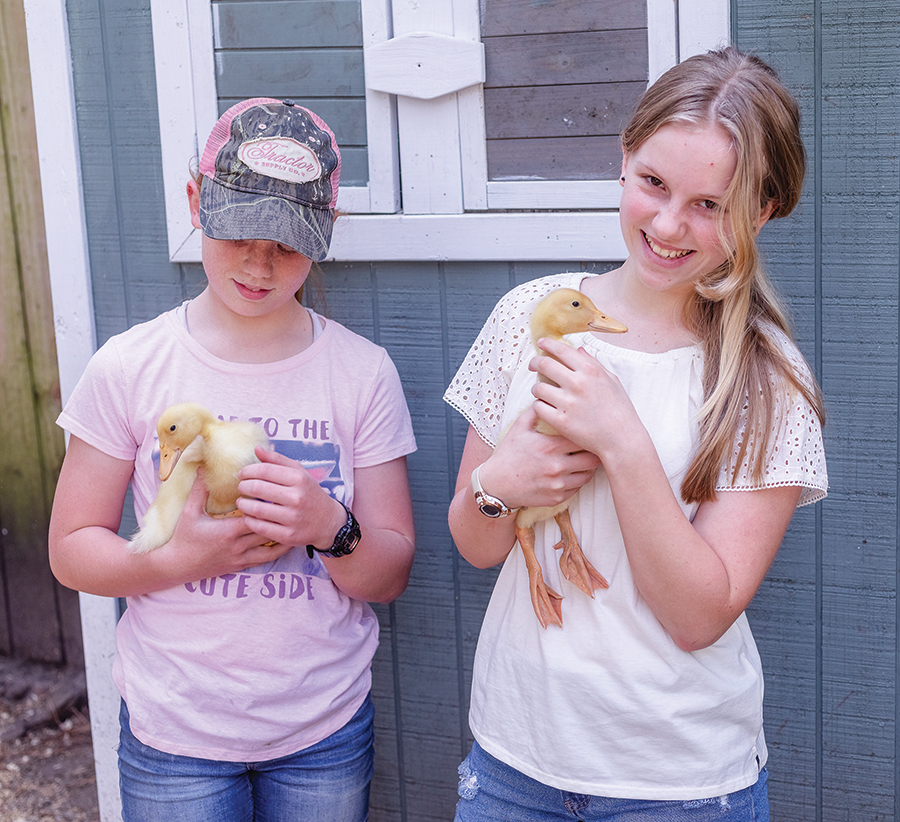 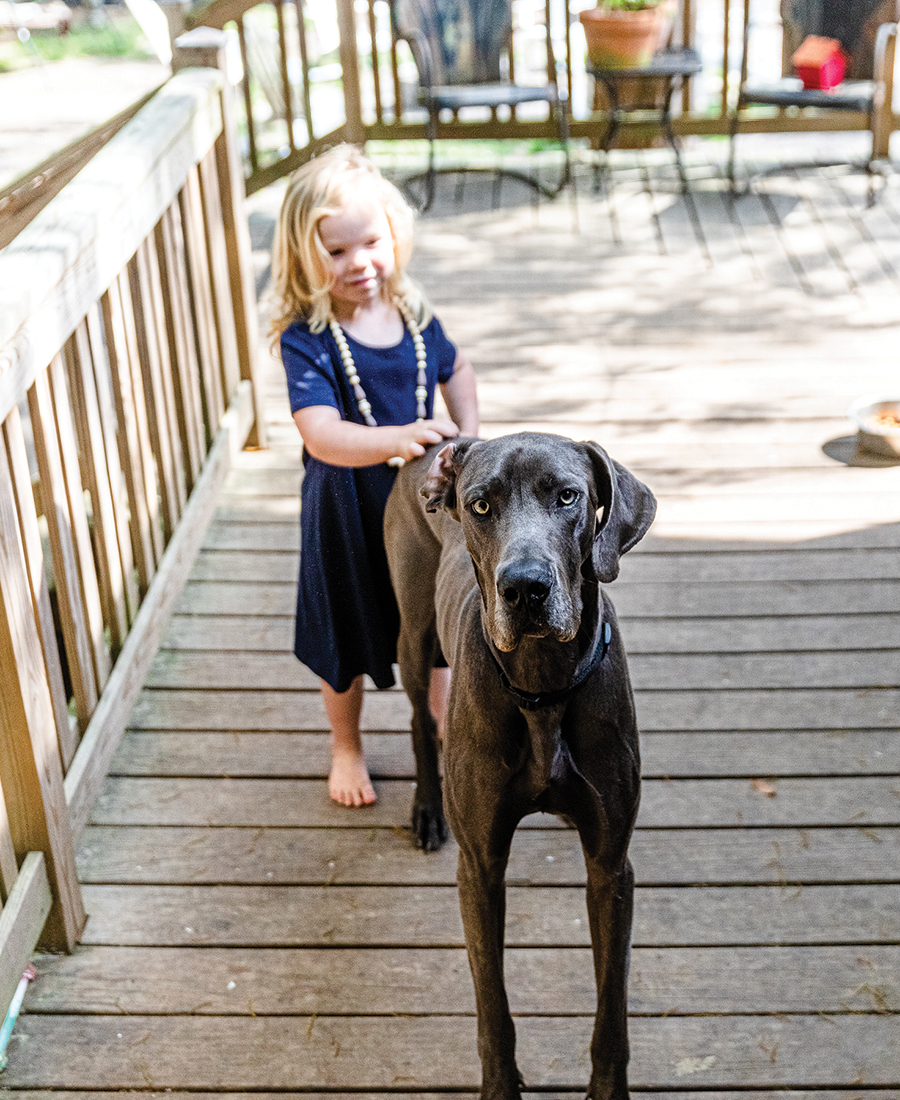 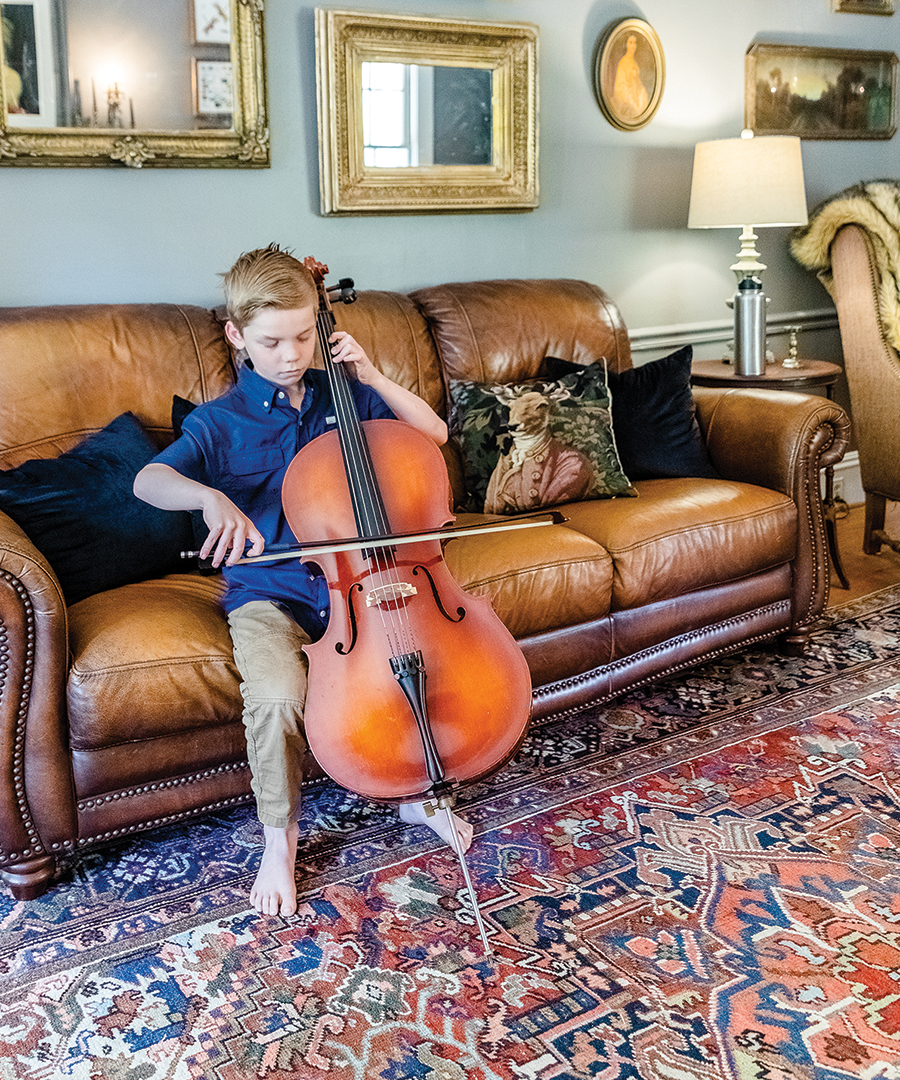