A tribute to a leader 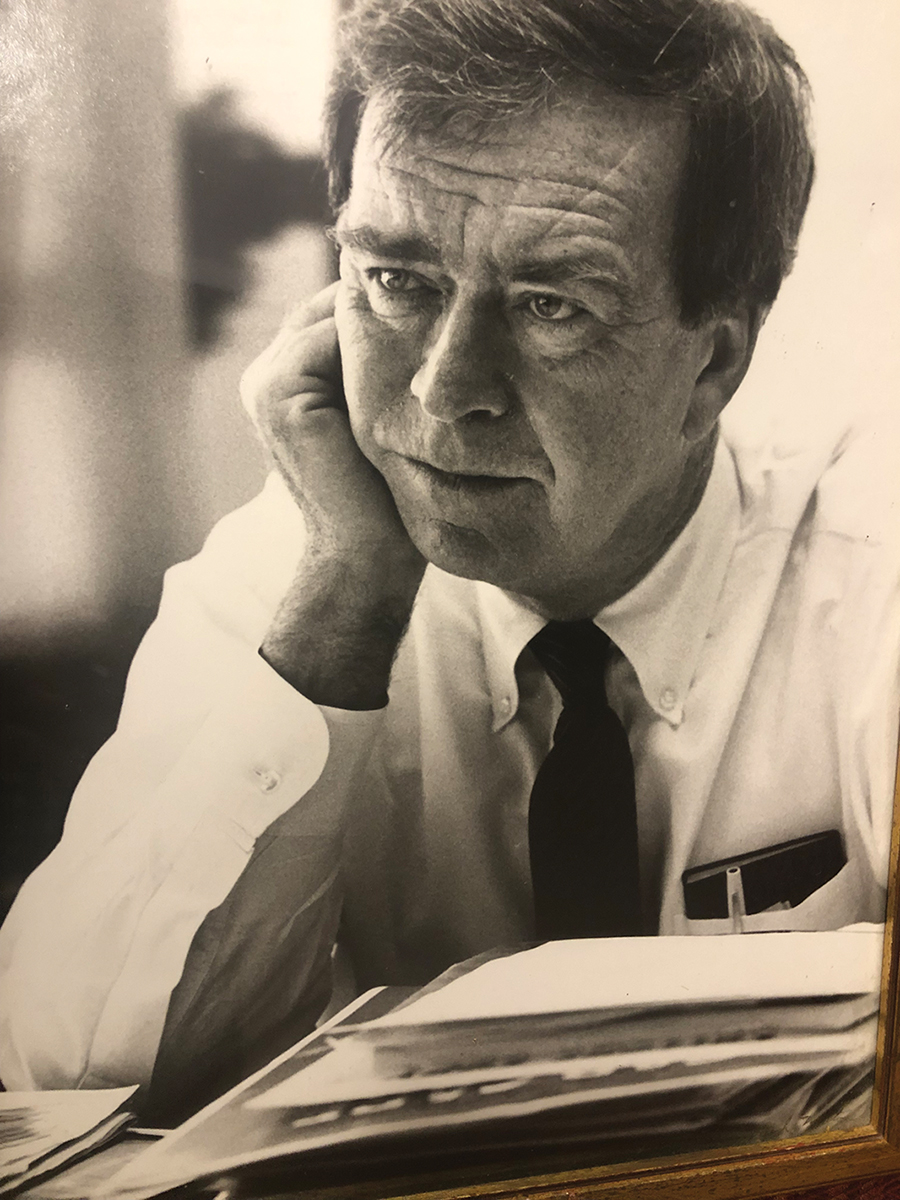 Frank Arthur Daniels Jr. died at the age of 90 on June 30, 2022, in his hometown of Raleigh. It was the peaceful conclusion of a life full of professional accomplishment, financial success, and contributions to his community and his state. But for his multitudes of friends and family, Frank Jr. — as just about everybody called him — is remembered for his capacity to give and receive love.

Sitting in the cavernous dining area of her parents’ home on White Oak Road, Julie Daniels, Frank Jr.’s daughter, and her husband, Tom West, scan the many family portraits and mementos. There is one of her father, then 65, in front of a printing press.

“Look!” she says. “He’s got the little red book in his pocket. He always had that.”

Yes, Frank Jr. always carried a book with the names of his best friends, their phone numbers and their birthdays. When he was younger, he’d send cards; as he got older, he found it easier to call them and sing to them (and anyone who was with him would be expected to sing along).

Julie is one of two children of Frank Jr. and his wife, Julia, and her memories are exactly what her father would want them to be. “Oh, they had fun — parties all the time, events at the paper, things like that,” she says. “But they always put me and my brother first. I don’t remember that they had all kinds of money — and they didn’t think of themselves that way. But when you ask me, what was his happiest day, I’d say just about every day was his happiest.” 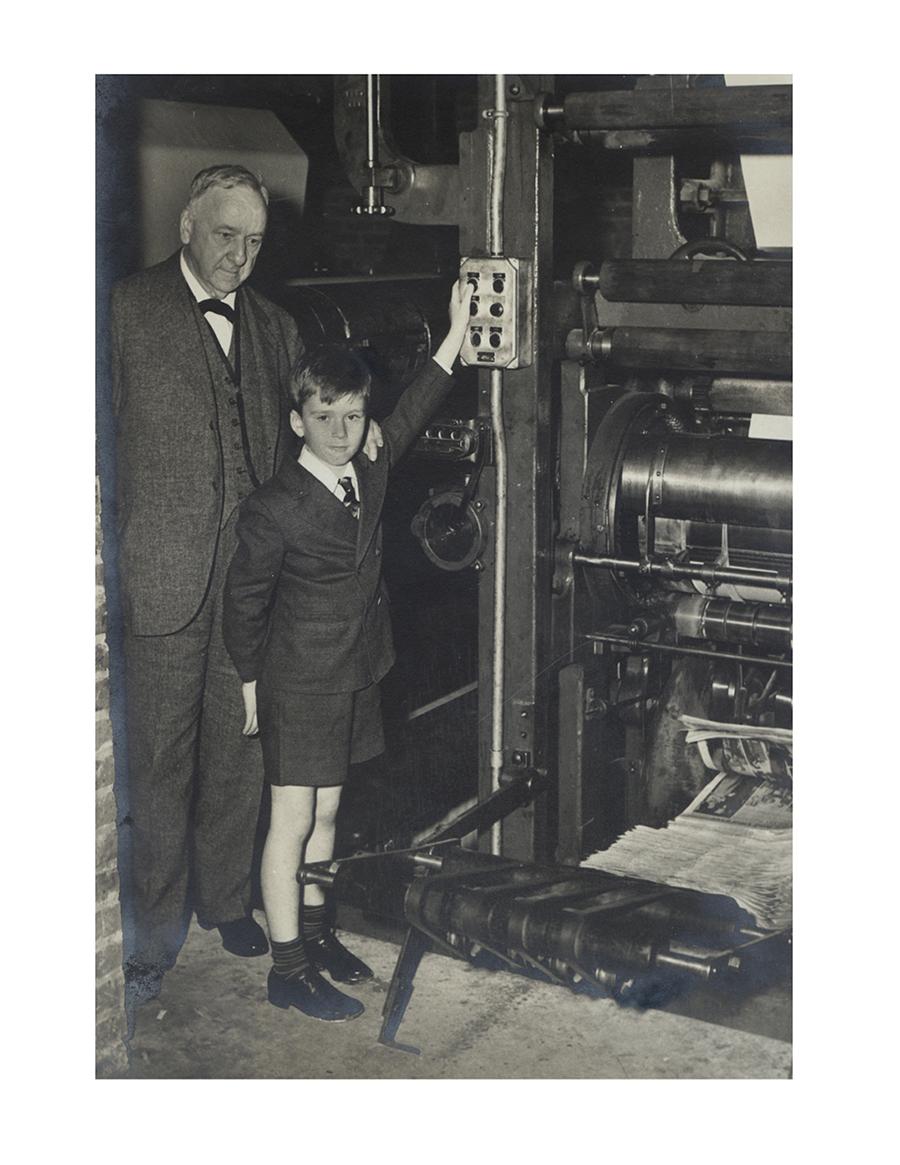 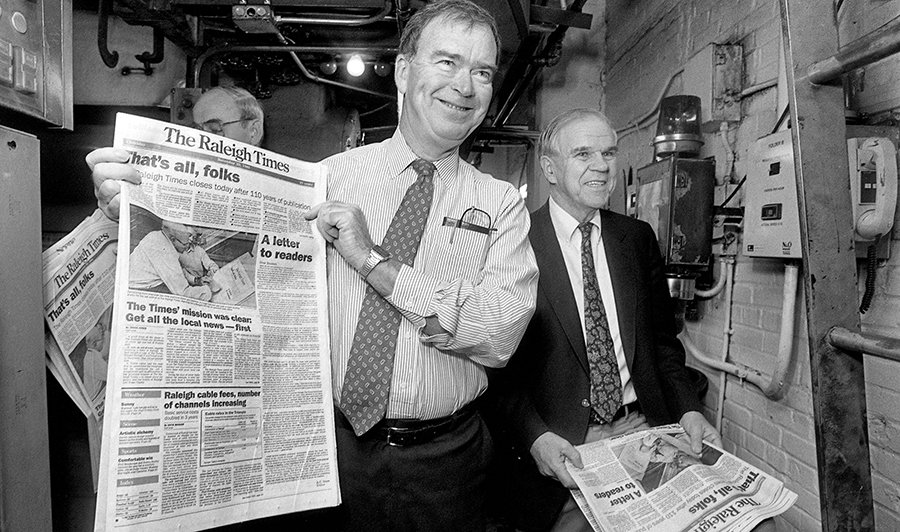 Right: Frank Jr. at press with grandfather, Josephus Daniels in 1939.

Frank Daniels Jr. was born at the “Old Rex Hospital,” on Sept. 7, 1931. His father, Frank Daniels Sr., was one of four brothers, three of whom were active in running The News & Observer, which was owned by Frank Jr.’s grandfather, Josephus Daniels. He attended Woodberry Forest School near Orange, Virginia, and graduated from the University of North Carolina at Chapel Hill in 1953. He did two years in the U.S. Air Force in Japan and tried a year of law school but was inevitably drawn back to The N&O, which turned out to be more than his birthright — it was his destiny.

Though he and his sister, Patsy, were raised in comfort and power, Frank Jr. was a righteous man. He had a sense of right and wrong that transcended the views of the generation from which he came, and of the family from which he descended. His son Frank Daniels III recalls going to the ACC basketball tournament with his father in 1968, when he was 12. It was the first varsity year for Charles Scott, a UNC sophomore who was the first Black basketball player for the Tar Heels.

A man behind them began taunting Scott. It was something Frank’s dad tolerated until he heard the n-word. “He turned around and told the guy to shut the hell up and then said, ‘We don’t need you here.’ The guy left,” says Frank III. “That really took something.”

Frank Jr. worked various jobs in all departments at The N&O and was popular with the other workers at the paper. Sometimes he chafed a bit working for his father (who, as the publisher, ran the business operations) and his uncle Jonathan, the editor, but he stayed the course and, after working his way up, became publisher in 1971.

A big man for his time, Frank Jr. was 6 feet, 3 inches tall and burly. He had huge hands and a booming bass voice that carried through a room, though his eyes possessed a mischievous twinkle and he loved a good joke. 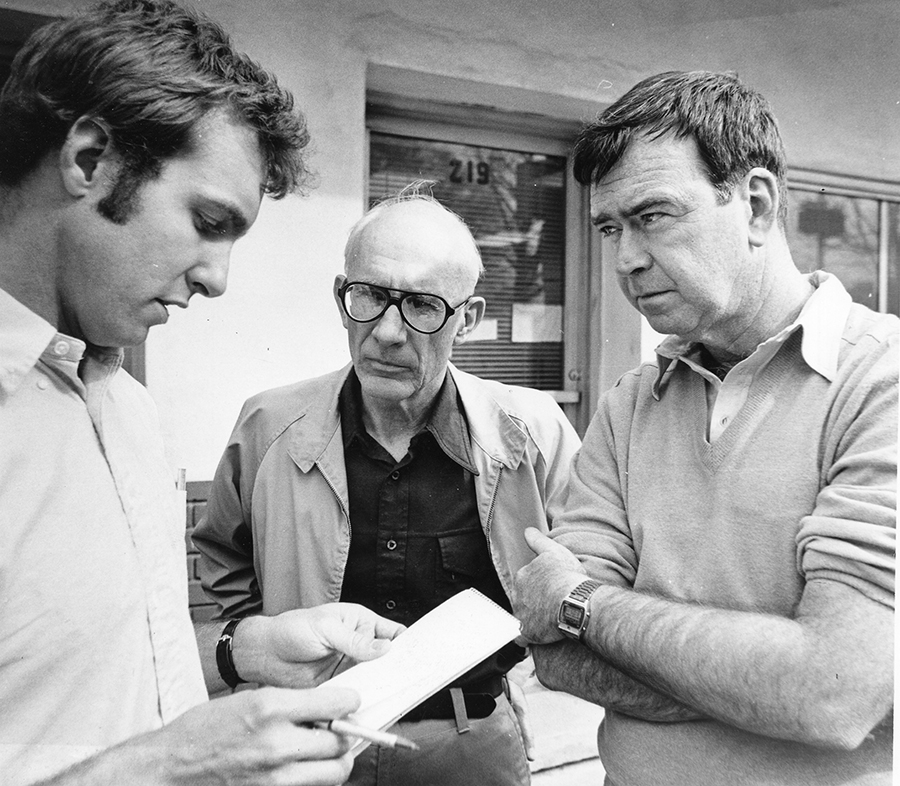 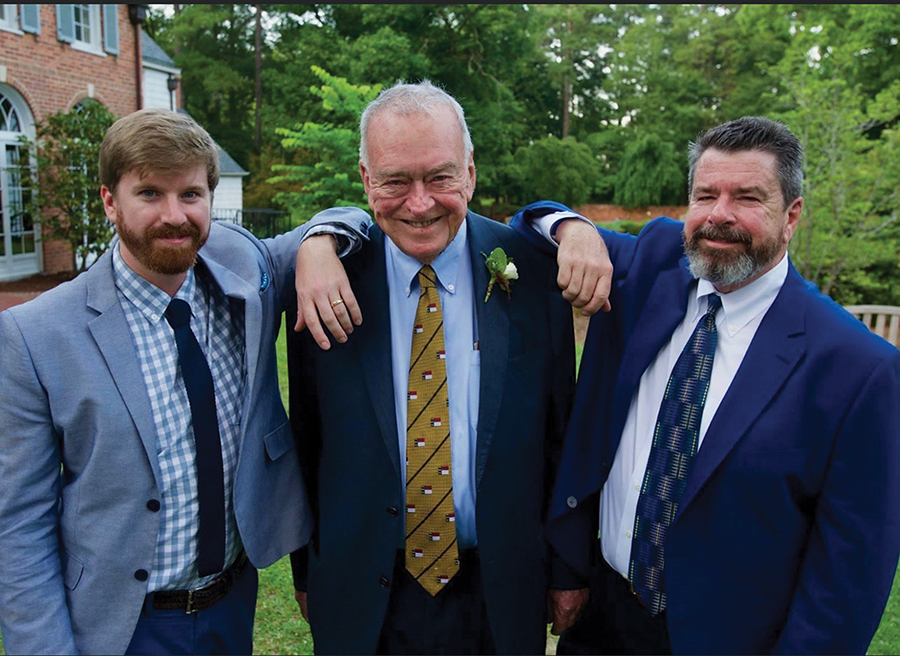 Gary Pearce, a longtime political strategist, remembers his boss from his own early days as an assistant city editor at The N&O in the mid-1970s. “He’d walk through the newsroom every day about 5 o’clock to go talk to Claude Sitton,” says Pearce, referring to the editor of the paper at the time. “One day, Frank’s walking through and there’s a phone ringing at an empty desk. No one’s there, so Frank — the publisher, now — puts down his briefcase, answers the phone, puts a piece of paper in the typewriter and takes down the item, a minor news brief. Then he sticks it in the basket, gathers his stuff and walks on down the hall, not saying a word to anybody. Most publishers wouldn’t have done it. That told me a lot.”

While at The N&O, Frank Jr. took some courageous stands as a fellow who owned a newspaper too liberal for many local business and community swells. He pushed for a merger of the Wake County and Raleigh schools, supporting a controversial change that led to vastly improved, integrated schools. He supported civil rights and women’s rights and didn’t balk when the newspaper started asking troubling questions about the war in Vietnam.

In addition to leading the paper, Frank Jr. rose to the top of dozens of professional associations. He was chairman of The Associated Press, and part of the leadership of nearly every civic organization in Raleigh — from United Way to school support groups to the YMCA board to chairing the boards of the North Carolina Museums of History and Natural Sciences. His board memberships and chairmanships over nine decades were too numerous to name, but his son says that his favorite post was chairman of the Smithsonian Institution’s National Board. He arranged partnerships between the Smithsonian and North Carolina’s history and science museums. They reflected his lifelong belief that everyone, at every station in life, deserved to know about art, history and science, and that the knowledge should be free.

Frank III says that his father’s seemingly natural capacity for leadership always put him in charge of whatever organization he had been asked to join. “Every group he was in, he rose to the top,” Frank III says. “I think it was his capacity for empathy. He could see what people needed, and it was important for him to help them.”

The Daniels family sold The News & Observer to the McClatchy newspaper company in California in 1995, and Frank Jr. remained as publisher until he retired in 1996.

In retirement, he became busier than ever, continuing his board memberships, staying active particularly in Democratic Party politics. Virtually every governor paid him a call. No one is sure if he ever gave a campaign contribution to a Republican. During his tenure, as with his grandfather and father, The N&O never endorsed a Republican candidate for office.

Frank Jr. bought a building on Fayetteville Street in downtown Raleigh and established an office on the sixth floor, where he entertained movers and shakers and fellow board members and politicians. Through his membership in social and golf clubs he influenced another two generations of businesspeople, candidates and entrepreneurs. Until the very last month of life, he rarely had an empty lunch date or an evening without some kind of activity. 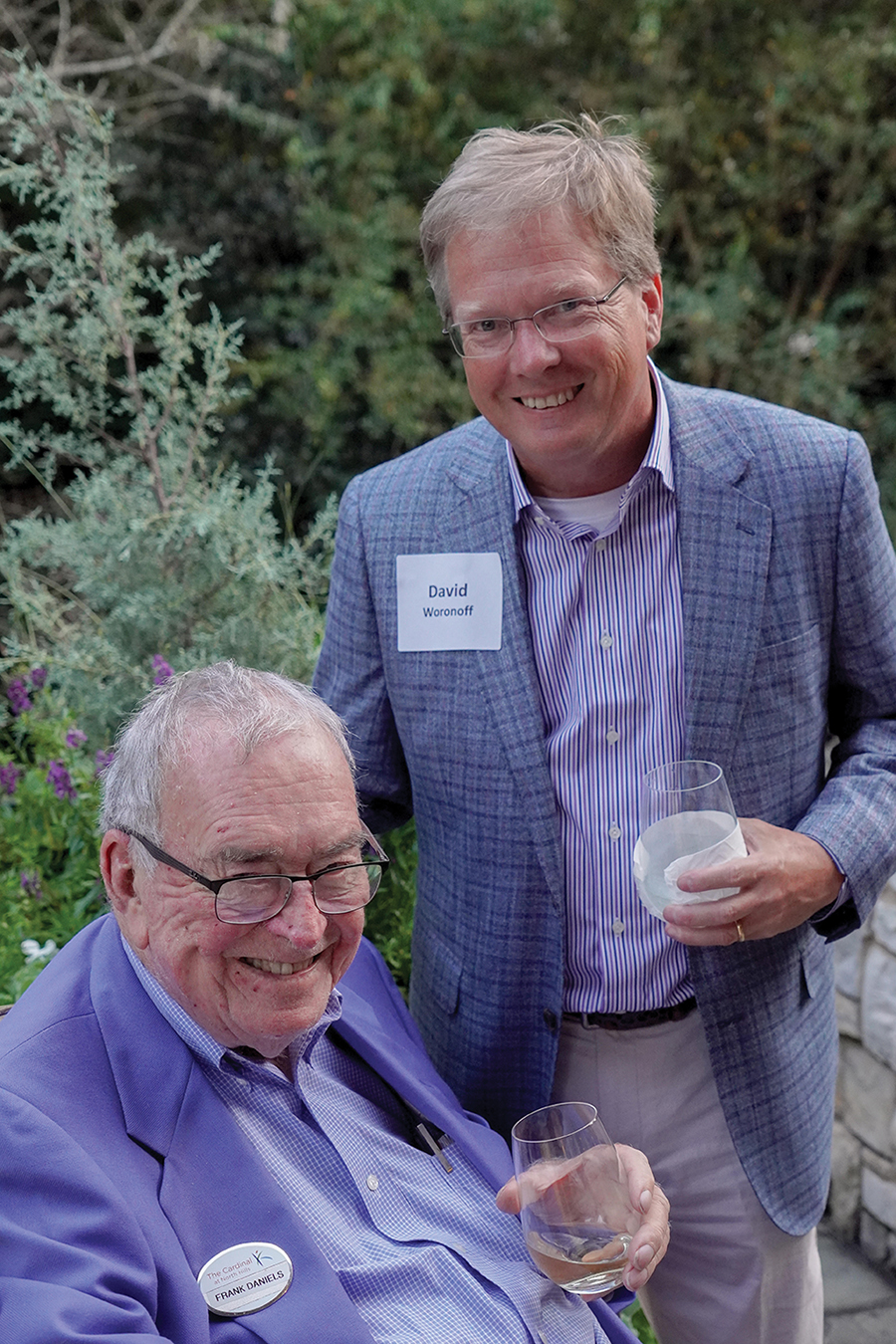 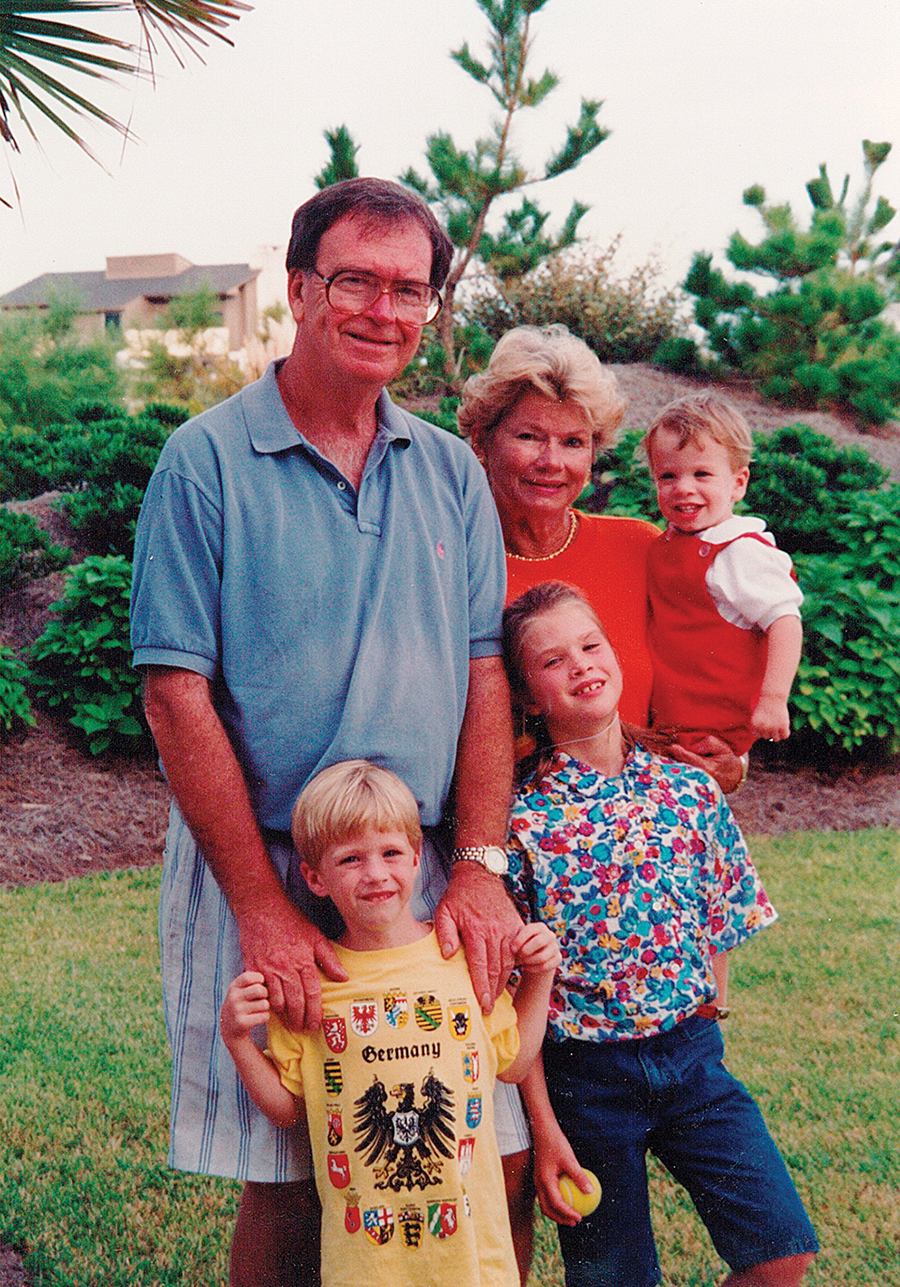 Even after his departure from The N&O, Frank Jr. supported new ventures and publications. Shortly after his retirement, he and four others bought The Pilot in Southern Pines, then owned by Sam Ragan. Why did he do it? “It just gets in your blood,” was all he ever said.

One of the other owners is David Woronoff, Frank Jr.’s nephew. Woronoff, who runs the business for the partnership, was young at the beginning, confident but willing to ask his uncle’s advice. “He’d never let me call up and say, ‘This happened, what should I do?’” Woronoff laughs. “But he’d give advice — not that he expected you to take it.”

In one case, a prominent Pinehurst businessman called Woronoff, the publisher of The Pilot, after the newspaper was critical of a venture in which the businessman was involved. “He was screaming at me,” says Woronoff, “really rough stuff.” Woronoff called his uncle and the advice Frank Jr. gave him was unequivocal. “He said, ‘David, you never go wrong punching the biggest bully in town in the nose. What would be wrong would be if you didn’t give the person in need a hand up.’”

Frank Jr. stayed involved in the publishing group until his death, as it added The Country Bookshop, another community paper and five magazines — Business North Carolina, PineStraw, WALTER, O.Henry and SouthPark — to its stable.

Frank Jr. built friendships from childhood that lasted him a lifetime, but what he enjoyed most about all his associations was just learning. His granddaughter, Kimberly Daniels Taws, who runs The Country Bookshop, remembers visiting the beach with her grandfather when she was young. She joined him on the deck, where he was sitting next to a foot-tall stack of unusual reading material: clippings, folders, magazines, books. “I said, ‘What are you doing?’” she says. “And he said, ‘Well, I’m trying to figure out how I feel about nuclear power.’”

Many years ago, Frank Jr. hired attorney Wade Smith to help with some legal issues involving the newspaper. That led to a deep, lifelong friendship. “To me, Frank was larger than life, but Frank was real,” Smith says. “There was no putting on airs about him. He would be straight with you in all ways, and I liked that about him.”

Communications consultant Joyce Fitzpatrick met Frank Jr. when she rented space in a downtown building he owned some 20 years ago. She began regular lunches with him and Smith once or twice a month. “He was a hyper-social person,” she says. “He loved to have his lunches planned. We always typed out an agenda. It covered everything — politics, world events. People would come over to sit with us, wanting to know the latest.”

One thing he didn’t seem to have was inhibition. “Oh,” Fitzpatrick says, “we’d switch from politics to golf to what happens when we die. In the last few lunches, Wade would give comfort: We’ll see each other again.”

Perhaps, in the end, Frank Arthur Daniels Jr. is proof that a man can be great without being perfect. Frank Jr. was the first to laugh at his own flaws; he enjoyed off-color humor, indulged in profanity and played practical jokes. But if he felt he’d been too rough on someone, he’d apologize.

“From him I learned the beauty of friendship and being with other people. The importance of generosity. And that sense of humor!” says his daughter Julie. “Sometimes you don’t realize the great gifts.”

In a eulogy at his father’s funeral at White Memorial Presbyterian Church, his son, Frank III, shared a note that Frank Jr.’s longtime personal assistant, Julie Wood, found on his desk after he passed: Feed the hungry. Clothe the naked. Forgive the guilty. Welcome the stranger and the unwanted child. Care for the ill. Love your enemies.

“It’s a list of what he thought religion — and we — should teach,” says Frank III, who closed the eulogy with: “We’ll do our best.”  PS

Jim Jenkins is an award-winning writer who has received North Carolina’s highest honor, the Order of the Long Leaf Pine. He retired from The News & Observer in 2018 after 31 years as an editor, columnist and chief editorial writer.