Powerhouses of the Pacific

Se Ri Pak, who retired from a Hall of Fame career in 2016, didn’t compete in the 2021 U.S. Women’s Open, but as sure as there was drama during a topsy-turvy final round at The Olympic Club in San Francisco, her enduring influence on golf was clear. 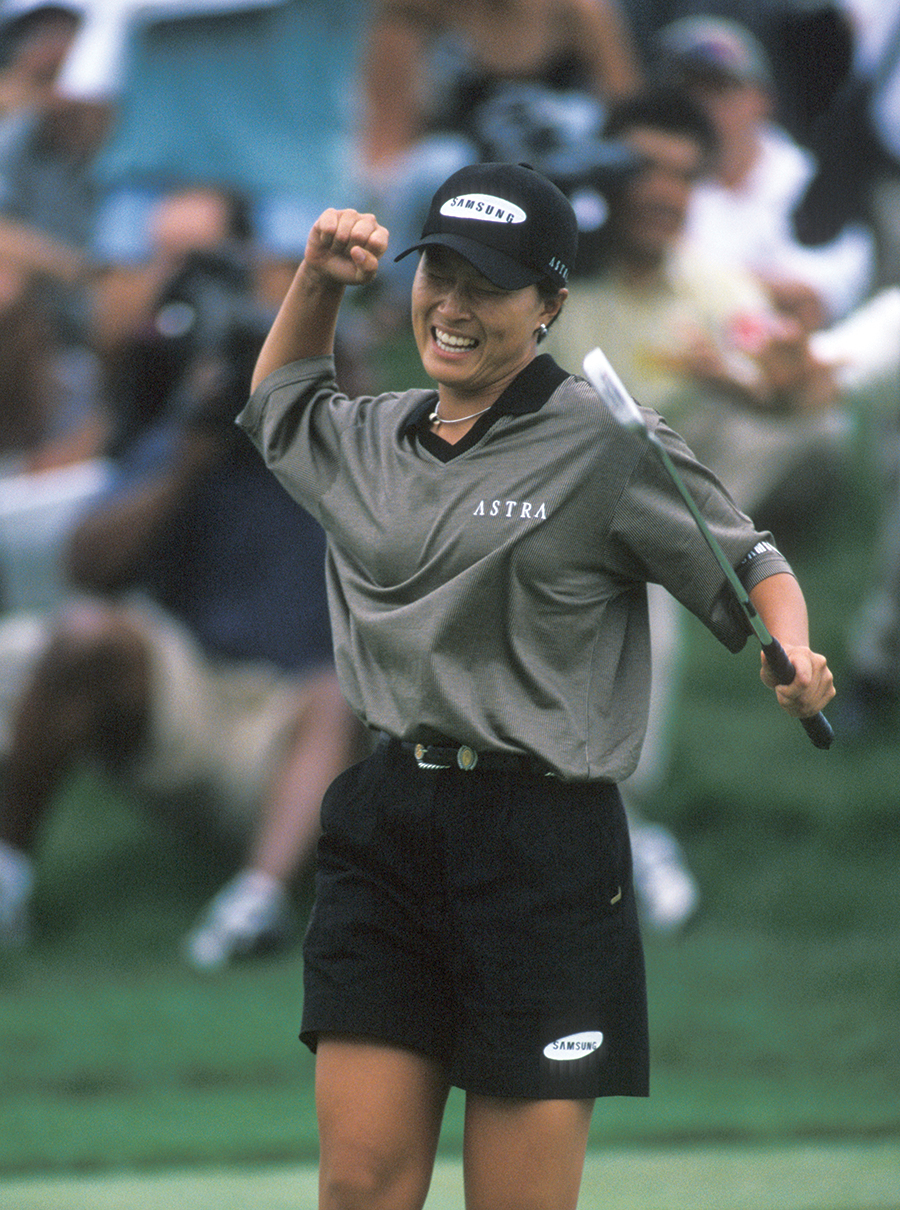 By winning the U.S. Women’s Open in 1998 — along with the LPGA Championship that same season — Pak ignited a golf revolution in the Republic of Korea. Many girls in Pak’s home nation were brought into the sport through the groundbreaking achievements of the 20-year-old major champion, with South Koreans soon becoming a force on the LPGA Tour. Nearly a quarter-century since Pak motivated her countrywomen to excel, women golfers from across Asia have made an astonishing impact in majors and beyond.

Chako Higuchi of Japan (1977 LPGA Championship) was the only Asian, female or male, to win a major title prior to Pak’s breakthrough. Starting in 1998, 25 women representing six Asian countries have won 45 of the 104 majors that have been played. Trophies have been lifted by athletes from South Korea, Taiwan, Thailand, Japan, China and the Philippines. (Two major victories by Korean-born Lydia Ko, who plays for New Zealand, where she grew up, aren’t counted in the total.)

Their success has been particularly striking at the U.S. Women’s Open, where Asian players have captured 11 of the last 14 editions of the oldest major in women’s golf — a championship that was won by only three international players in its first four decades: Faye Crocker, Uruguay, 1955; Catherine Lacoste, France, 1967; Jan Stephenson, Australia, 1983.

Yuka Saso wasn’t a familiar name to American golf fans until early last June. That changed when the 19-year-old representing the Philippines steadied herself from a rough start on Sunday at The Olympic Club. Saso capitalized when Lexi Thompson lost a large lead over the final eight holes, coming home in 41 strokes on a course notorious for being the place where Arnold Palmer blew a seven-shot advantage after 63 holes at the 1966 U.S. Open to fall into a tie with Billy Casper, who defeated him the following day in a playoff. 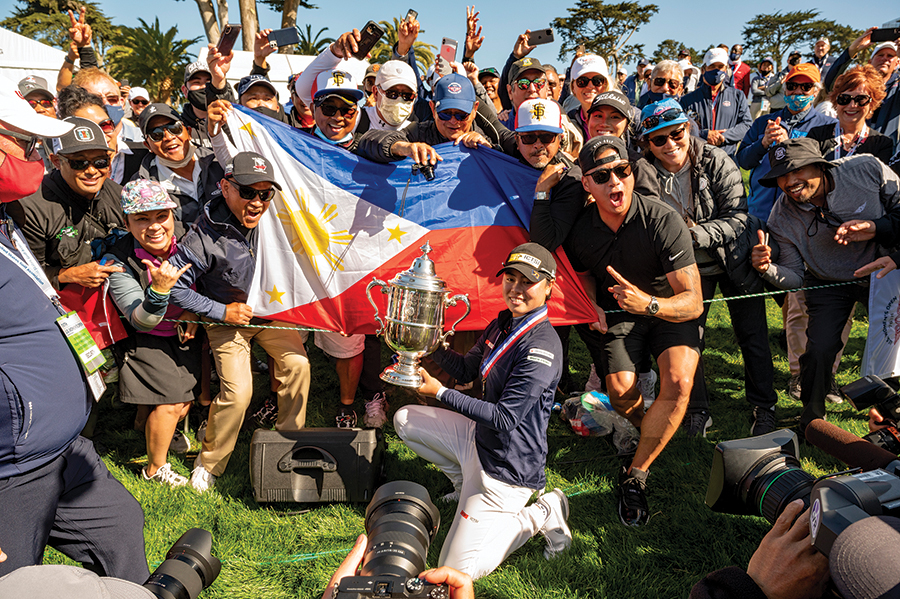 Yuka Saso poses with fans and the trophy after winning the 2021 U.S. Women’s Open at The Olympic Club

With Thompson throwing away her hold on the championship, Saso, who trailed by six strokes through No. 10, closed with a 73 and tied Nasa Hataoka of Japan at 280. On the third playoff hole, Saso made a birdie to win the Harton S. Semple Trophy and the $1 million first prize. The daughter of a Filipina mother (Fritzie) and Japanese father (Masakazu), Saso matched Inbee Park of South Korea (2008, Interlachen Country Club) as youngest U.S. Women’s Open champion. Uncannily, Park, who has gone on to win seven major titles, and Saso were each 19 years, 11 months, 17 days old at the time of their victories.

“I was just looking at all the great players on (the trophy),” Saso said after winning. “I can’t believe my name is going to be here.”

Five other golfers from the Far East finished in the top 10 behind Saso and Hataoka at The Olympic Club, further proof of the region’s strength in the women’s game. A milestone was reached last fall when Jin Young Ko won the BMW Ladies Championship in her homeland. It was the 200th LPGA victory by South Koreans.

“This is a tremendous honor,” said Ko, No. 1 in the Rolex Rankings, the ninth Asian golfer to sit atop the list since its formation in 2006. “And I think it’s very fortunate that I am the player, the 200th-win player, and I actually think that it’s really fortunate that it was an event held in Korea as well. Obviously, being the player of the 200th win by Koreans was not a goal that I was working toward. It just happens that I was really focused, and I did my best and this came along.”

The trail of success for South Koreans that culminated with Ko’s landmark victory began with little fanfare in 1988. Ok-Hee Ku broke through that spring at the Standard Register Turquoise Classic in Arizona, defeating standouts Dottie Pepper and Ayako Okamoto, of Japan, a 17-time winner on the LPGA Tour. Because the 1988 Summer Olympics were being held in Seoul, the country’s attention was focused on that, and Ku’s victory got little attention — certainly compared to the fanfare that greeted Pak’s double-major success a decade later. It was a start, though, and brought to mind a Korean proverb: “If you collect pieces of dust, eventually you will have a mountain.”

Ku, who won 23 tournaments on the LPGA of Japan, never added to her lone LPGA victory. She died at age 56 in 2013, by which time Koreans had become a dominant force on the LPGA Tour.

“I can’t imagine that so many Korean women are playing and succeeding on the LPGA, even in my dreams,” Ku told Golf World two years before her death.

The timing for golf to bloom was better when Pak, a golfer who interspersed smiles between powerful and accurate shots, came along. When Pak returned to her native soil in late 1998 after triumphing in America, her hero’s welcome was complicated by the fact that she was worn out, hounded by paparazzi even as she was treated for exhaustion and a viral infection in a hospital.

Pak knew she would be a beacon for women golfers coming up behind her, but that so many talented players emerged surprised her. “To be the best, you have to put everything into it,” Pak said a decade ago. “But they shouldn’t have too much pressure, extra pressure. But I think they feel it. There is only one No. 1 spot.”

The battle in 2021 for first place at The Olympic Club’s Lake Course — hosting the women for the first time after being a five-time U.S. Open site for the men — was intriguing. Megha Ganne, a 17-year-old amateur from New Jersey, shared the first-round lead and remained in contention at three under par, tied for third place, through 54 holes. Ganne’s performance put her in the final grouping on Sunday with Thompson, whose Saturday 66 put her at 7 under, one stroke ahead of Saso.

It was just Saso’s third appearance in the U.S. Women’s Open. Although Thompson was only 26 years old, she was competing in her 15th national championship, having debuted at Pine Needles in 2007 when she was 12. The talented and popular Floridian arrived in San Francisco with 11 career LPGA victories, the most recent two years earlier. Despite her skills, Thompson had only one major title, the 2014 Kraft Nabisco Championship.

When Thompson played a steady front nine at Olympic and Saso carded double bogeys at the second and third holes, it looked as if her major drought would be coming to an end and Saso would be left with a learning experience. “I was actually a little upset,” Saso said of her shaky start. “But my caddie talked to me and said, ‘Just keep on going. There are many more holes to go.’ That’s what I did.”

Strange things tend to happen at the famed Bay Area club — in addition to Palmer’s 1966 collapse, favored Ben Hogan (1955) and Tom Watson (1987) suffered U.S. Open disappointments there — and Thompson played a poor back nine, unable to close. A bogey on the final hole meant Thompson wasn’t even going to make the playoff and give herself a chance for redemption the way Ariya Jutanugarn did in the 2018 championship at Shoal Creek, where the Thai star lost a 7-shot lead with nine to play but won a playoff against Hyo-Joo Kim. 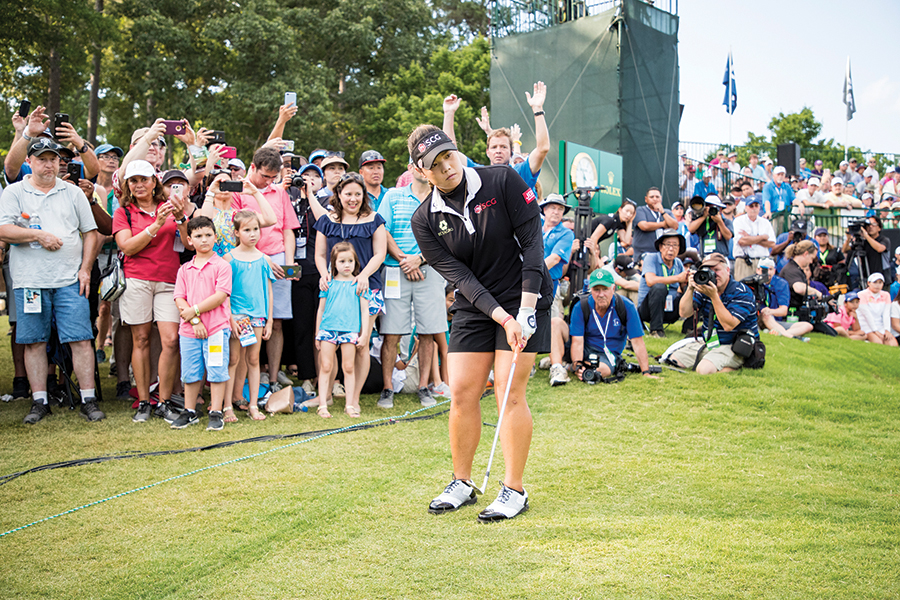 In contrast to Thompson’s back-nine slide, Saso birdied Nos. 16 and 17 to tie Hataoka, whose 68 was one of only four closing scores under 70. After both players parred the two holes of an aggregate playoff, Saso’s birdie in sudden death made the difference as she became the 11th consecutive major champion from outside the United States, the longest American drought in women’s golf history, that Nelly Korda soon ended at the KPMG Women’s PGA Championship.

To see Saso swing — taut, complete turn going back, hips quickly and fully clearing on the way through — is to think of another world-class golfer. Saso modeled her action after that of four-time major winner Rory McIlroy, watching his swing for many hours on YouTube. The similarity of their movements is striking when viewed side-by-side on video. Two weeks after winning the Women’s Open, Saso got to meet her idol as he played a practice round at Torrey Pines Golf Course for the U.S. Open. His advice to Saso: Keep a swing journal. “Everyone’s got a blueprint of what their swing is,” McIlroy told reporters. “If they keep on top of it and they do the same things, do the same drills over time, you fast forward 20 years you’re probably going to have a really good career.”

The first major winner from the Philippines, a country of more than 100 million with just 100 or so golf courses, Saso isn’t the first talented Filipina to earn golf headlines. More than 80 years ago, Dominga Capati, a laundress on a Manila sugar estate that bordered a golf course, picked up the game and defeated visiting foreign women players in the Philippine Women’s Open. A couple of decades later, in 1964, Capati played for the Philippines in the inaugural Espírito Santo Trophy, an international women’s competition. The Dominga Capati Memorial Tournament is still played to honor her contributions to golf.

Saso had plenty of support as she made history at the Olympic Club. Nearby Daly City is known as “Little Manila” for its large number of Filipinos. “I don’t know what’s happening in the Philippines right now, but I’m just thankful that there’s so many people in the Philippines cheering for me,” Saso said. “I don’t know how to thank them. They gave me so much energy. I want to say thank you to everyone.”

When the defending champion tees off at Pine Needles, she will be playing under a different flag. Saso, who competed for the Philippines in the Tokyo Olympics last summer, is now representing Japan. Under Japan’s Nationality Law, a person must choose one nationality before turning 22 years old. Saso cited business reasons, particularly the ease of global travel with a Japanese passport, for making the switch.

“We are obviously saddened to see her go, but she will always be Japanese and Filipino to us,” Bones Floro, an executive with the National Golf Association of the Philippines, told the Philippine Daily Inquirer. “We hope that our countrymen understand and respect her decision. It’s sad that we lost her in terms of representation. But Yuka will always have a special place in our hearts as a Filipino, and we are happy for her.”

A golfer representing Japan has never won the U.S. Women’s Open. If Saso successfully defends her title — Australian Karrie Webb is the last to do so, at Pine Needles in 2001 — she would make history two years running. Given the Asian success of the last couple of decades, it wouldn’t be wise to bet against her.  PS