The Lords of the Rings

Innovation among dolphins in a salt marsh

Tucked back in a western Florida salt marsh, far from the open ocean, a trio of bottlenose dolphins swim slowly through shallow waters searching for fish among a labyrinth of small, muddy islands covered in needlerush and a bright blue sky. Herons and pelicans, sensing an opportunity, patiently follow along, hopping from one mud bank to another as the dolphins continue their hunt through waters stained the color of a vanilla latte.

All of a sudden, one dolphin raises its tail high out of the water and brings it down forcibly, creating a massive splash and an audible “thwack” that can be heard throughout the expansive marsh. The predators have found their prey.

In water just a few feet deep, the dolphin starts to swim rapidly in a circle, vigorously pumping its tail up and down, stirring up the muddy bottom, creating a perfectly oval mud ring. The other dolphins swim over and the trio lift their heads out of the water along the edge of the mud ring, open their mouths, and wait.

A school of mullet, trapped inside the rapidly closing mud ring, starts to panic. Not wanting to swim through a wall of mud, the fish opt instead to leap out of the water, over the edge of the mud ring — right into the mouths of the waiting dolphins.

It’s all over in the blink of an eye. Each dolphin, having successfully caught a fish, lowers their head back into the murky water and continues hunting the narrow channels of the salt marsh. Before the morning is over, they will repeat this behavior dozens of times until fully satiated.

Bottlenose dolphins are renowned for their intelligence and adaptability. After humans and a few primates, they have the largest brain-to-body ratio of any living animal. Incredibly social, they have perfected innovative hunting techniques to maximize efficiency in capturing prey, no matter the environment. 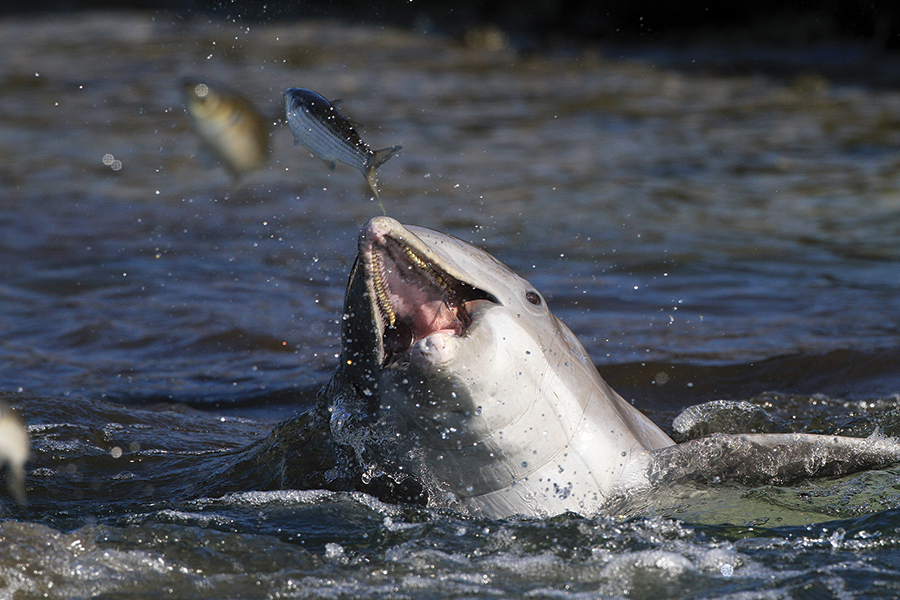 In the Bahamas, bottlenose dolphins swim along shallow waters, using echolocation to scan sandy bottoms for buried flounder and razorfish. When prey is located, a dolphin will stick its head into the loose sand and push water out of its mouth to flush the fish from hiding. In tidal marshes along the South Carolina coast, bottlenose dolphins intentionally throw their bodies completely out of the water up onto mud flats, chasing fish they have trapped against the shoreline. In the deep waters surrounding Cocos Island, bottlenose dolphins work as a team to corral schools of baitfish into tight balls against the ocean’s surface, which prevents their prey from escaping. Off North Carolina, bottlenose dolphins have learned to follow shrimp boats, who regularly toss their unwanted bycatch overboard, providing easy meals for the hungry predators.

All of these distinctive feeding strategies reveal rich, sophisticated cultures, shaped by a level of intelligence and creativity not often seen in the animal kingdom, and are passed down from generation to generation.

The bottlenose dolphins that use the mud ring feeding technique do so only along the shores of Florida and nowhere else in the world. The behavior, first described from the shallow waters of the Everglades and the Florida Keys, has since been observed at various spots along the state’s west coast up into the Panhandle.

I first witnessed mud ring feeding back in the early 1990s when I traveled down to Florida to complete my open water scuba certification with a class from the University of North Carolina.  Since that time, whenever I travel to the coastal waters of the Sunshine State, I keep a sharp eye out for these cunning predators.

The last time I was fortunate enough to observe mud ring feeding, it involved a group of four dolphins, one of which was a small calf. I was first alerted to their presence by a pair of brown pelicans rapidly diving headfirst into the water along the edge of an immense marsh. The ungainly birds would surface, take wing, fly a few yards, and then dive again into the murky water. It took a minute or two before I saw the telltale grey, shark-like fins of the dolphins out in front of the pelicans.

Knowing immediately what the dolphins were up to, I grabbed my binoculars and settled into the seat on my aluminum jonboat to enjoy the show. Right on cue, the lead dolphin smacked its tail onto the surface of the water and began to swim in a tight circle, stirring up the mud in the process.

The pelicans, seeing the dolphin complete the circle, swoop in just as the other dolphins swim over and lift their heads from the water. Dozens of mullet suddenly burst forth from the surface of the water inside the mud ring, like an erupting volcano. A-free-for-all ensues, as both mammals and birds lunge from side to side trying to catch the leaping fish.

The dolphin calf, too young for solid food just yet, does not lift its head out of the water. It simply stays close to Mom, intently watching her every move. There is no doubt that this is an important teachable moment for the youngster. I can’t help but marvel at how their complex social lives so closely mirror our own.

The dolphins regroup and swim around a sharp bend in the marsh, quietly disappearing into the murky green waters, searching for the next school of fish.  PS

Naturalist and photographer Todd Pusser grew up in Eagle Springs. He works to document the extraordinary diversity of life both near and far. His images can be found at www.ToddPusser.com.