Me, Jake and the Lake

Building a dream in Whispering Pines

The sign over the door echoes Leigh Morgan’s sentiment about her new waterfront home:

What she might add is c’est moi — meaning inside and out, floorplan, colors and furnishings, this house is me: designed to be lived in by me and Jake, my dog.

The 1,800-square foot cottage in modern farmhouse style, an architectural dernier cri, has only one bedroom, although the loft (now her office) soaring over the living area could be converted.

For sure, with its stark white exterior, black accents and Juliet balcony, Morgan’s lake villa stands apart from its neighbors, built in Whispering Pines ranch-style, circa 1970s.

Now try this one, in English: A change is as good as a rest.

“I made an announcement to my family that I was going to sell my house.”

Ah, but why . . . and where would she relocate, they wondered?

“I love the water. I’ve always wanted to live on the water.”

Morgan was familiar with lakeside properties in gated golf communities. No. She wasn’t familiar with Whispering Pines until a business errand took her there. Imagine . . . water, water everywhere. Not only water, but a perfect little building lot on Shadow Lake opposite protected wetlands, assuring forever greenery. She bought the lot a week later, in September 2018. Because a proper “me” house, like a good chocolate cake, must be scratch-made. 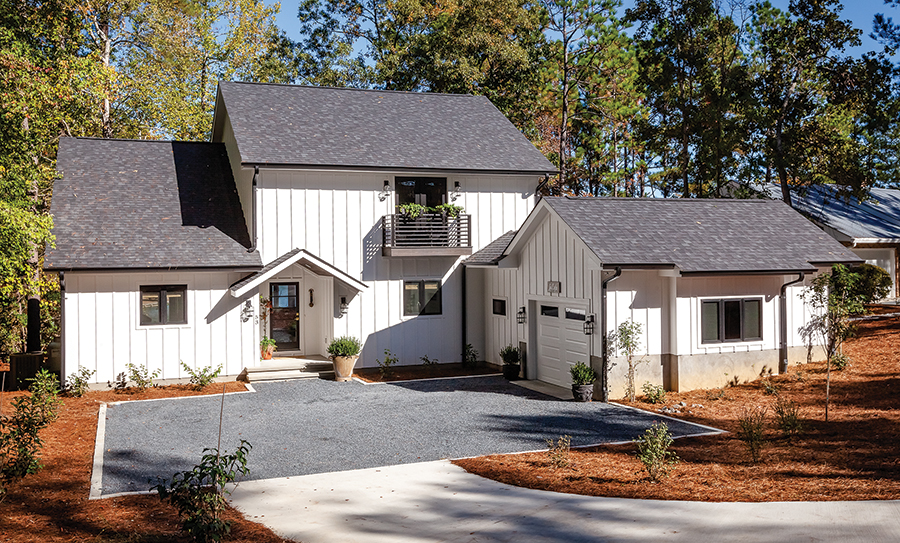 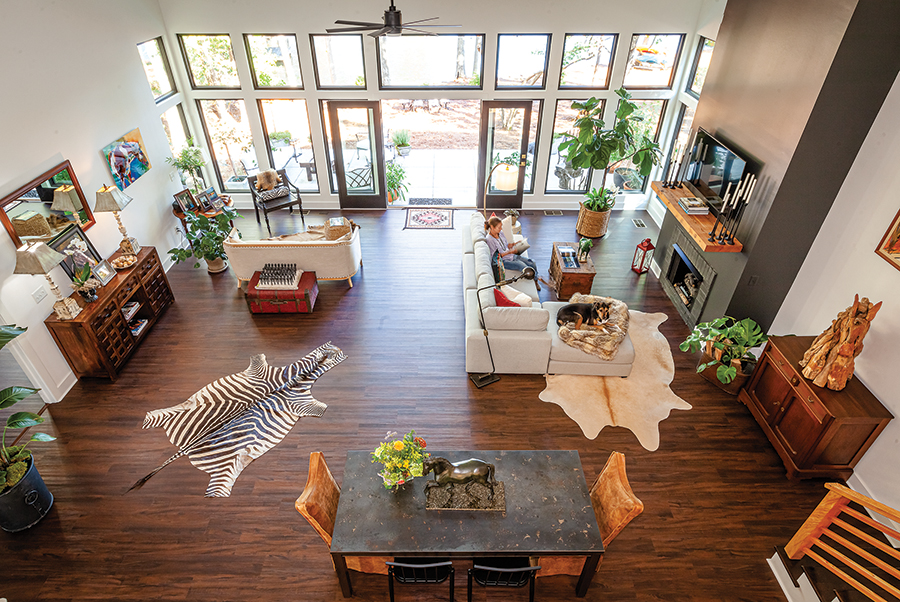 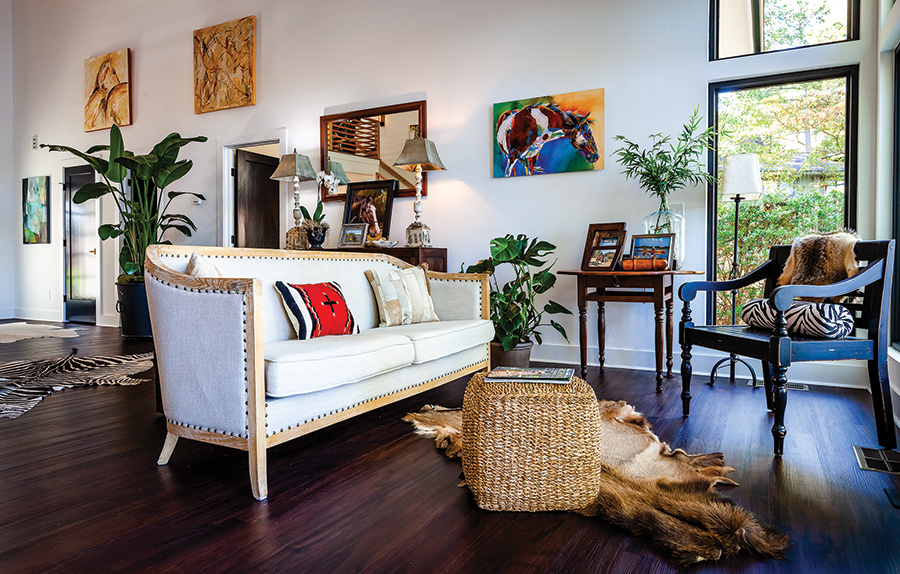 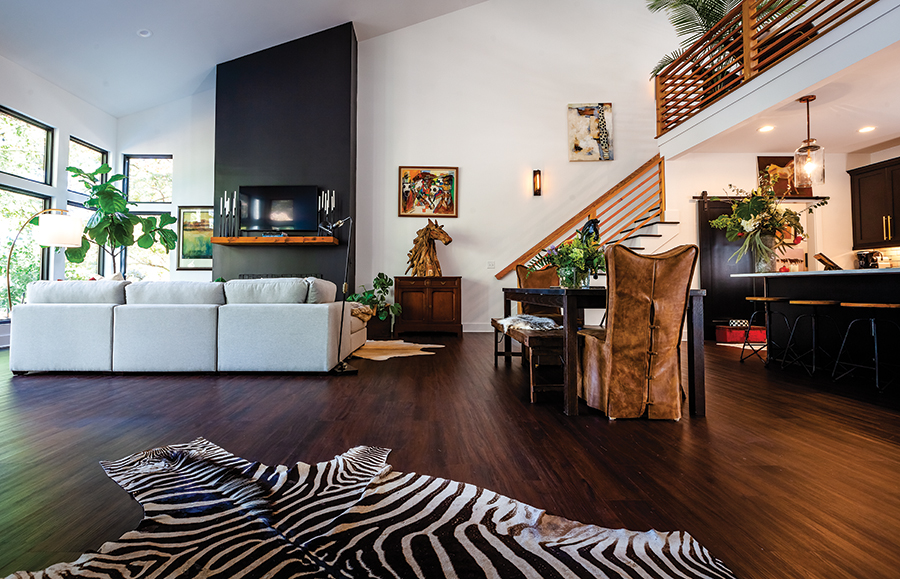 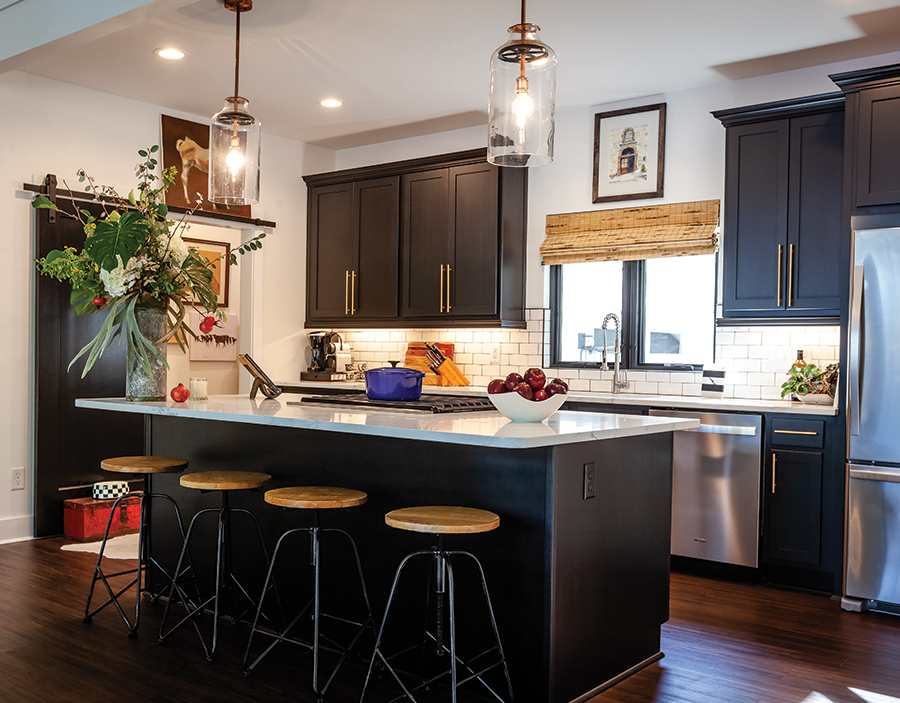 Morgan’s business is screen printing logos on T-shirts and promotional material, not drawing plans for a house. Luckily her stepfather, Larry Best, is a retired landscape architect with adjunct skills.

“We had a hurricane that September.” So she, her family and their iPads holed up for two days and designed the shell.

“I picked out everything myself,” Morgan says, beaming with pride. “I read a lot of magazines. So many choices.” Her criteria: “Something I won’t get tired of in five years.”

Once a builder was found, the work went fast. They broke ground in January, moved in by July. “Everything went right. It was a great process,” she says. Even the stark white wide-board exterior doesn’t compete with surrounding nature.

Of course Morgan drove out almost every day, with Jake, to monitor progress.

“He got to know the place gradually,” so the move wasn’t upsetting. Now, Jake has commandeered the Juliet balcony as a snooze spot/lookout.

Inside the black front door, one word says it all.

Magnifique! A 40-foot-long wall of soaring windows, which round the corners at each end, maximizes views of that coveted water. No blinds, no shades, no obstructions. Just a concrete terrace furnished for year-round outdoor cooking and living. Closer to the lake itself, another table for dining.

But what’s that faint whooshing sound?

Immediately inside the front door Morgan positioned an unusual wall-mounted fountain, with a sheet of water falling over a sheet of slate into a narrow trough, where it is sucked upward to fall again. To Morgan, the sound represents serenity.

“When you walk past the fountain it takes negative energy away,” she says. “It’s the first thing I turn to in the morning.”

Except for the bedroom, dressing room and bath, the entire main floor with its 30-foot ceilings is one space with white walls and dark-stained floors, divided only by furnishings. A contemporary sectional sofa the color of beach sand sprawls in front of the fireplace; a more formal settee with carved wood frame, also vanilla, faces the lake. The dining room table, vaguely Parsons, is darkly speckled metal — something she found abandoned in an office. Around it, black-lacquered Windsor chairs, others rawhide-covered; along one side, a bench. Tall bird of paradise and fiddle leaf fig plants help delineate areas.

Abstracts and animal art dominate the walls, splashes of color in this black-and-gray-and-white environment. Morgan is a lifelong horsewoman. Her parents have homes in Southern Pines Horse Country, also in Montana. Animal skin rugs and throws (a steely-eyed badger, perhaps?) come from a veterinarian-pathologist friend who practices taxidermy. 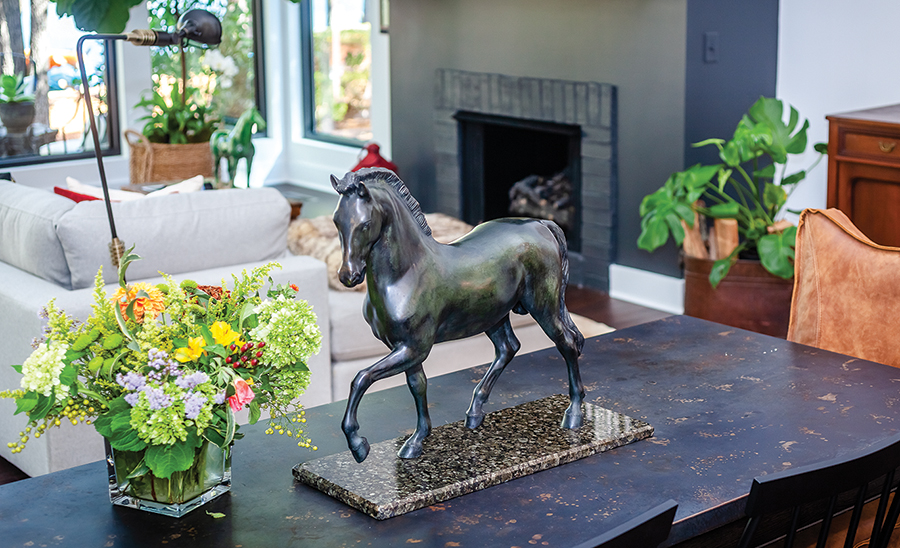 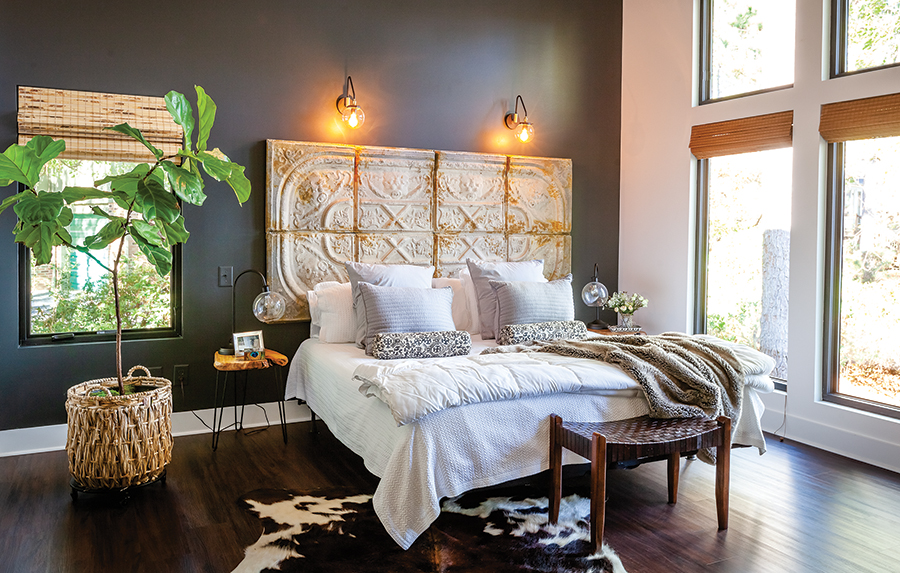 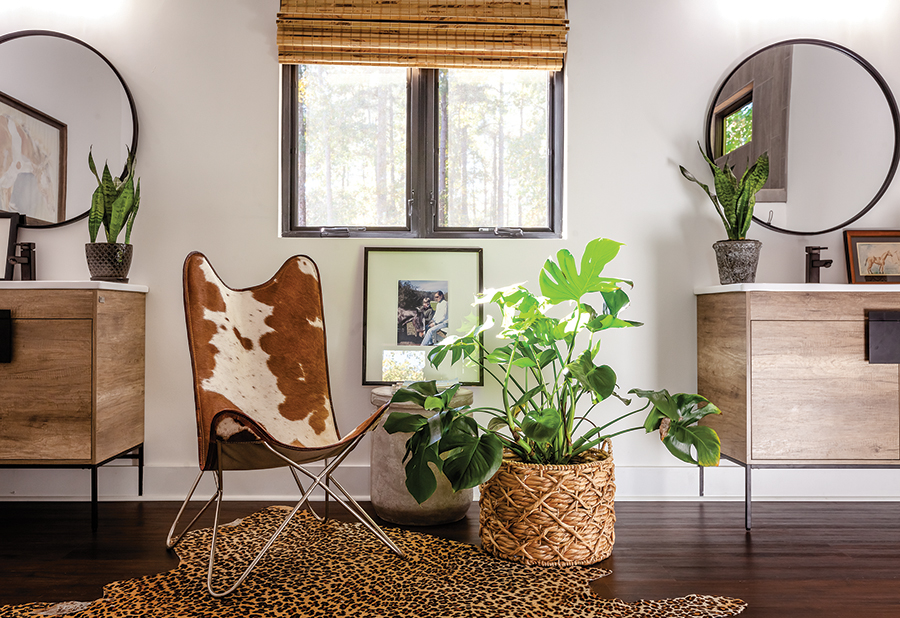 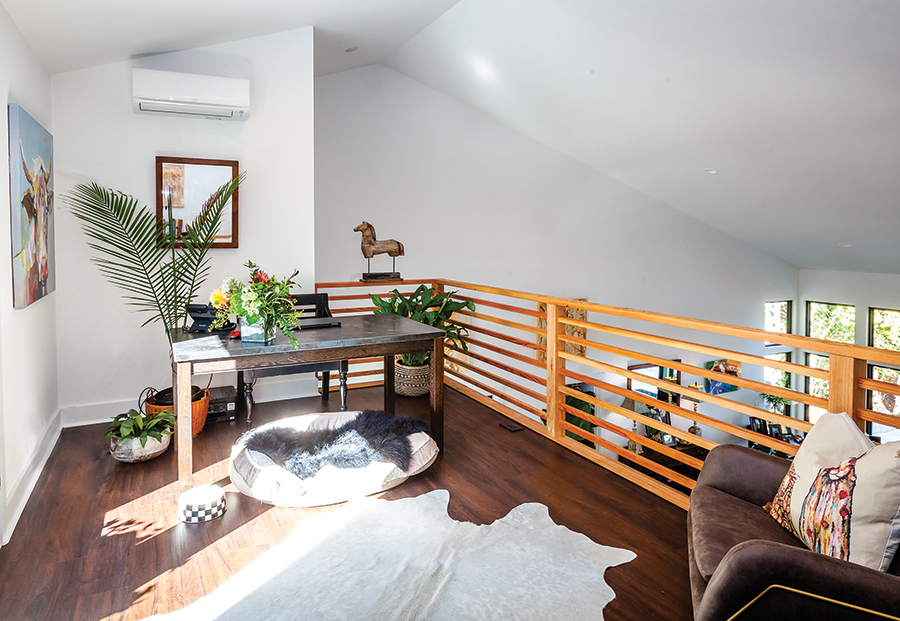 The kitchen borders the great room, suggesting the epithet: Know a woman by her kitchen.

“I’m a minimalist,” Morgan states. Every utensil, every appliance has its place, mostly out of sight. A microwave is not among them. “No, never had one, never liked them,” she says. “I boil water in a kettle.” She chose cabinetry with care to match the living space it is part of: deep charcoal, matte finish instead of hard-edged glossy. Practical white ceramic tile forms the backsplash

A sliding black barn door separates the only bedroom from the great room. On display here, her boldest acquisition: the headboard, a massive, mottled gray metallic panel mounted on a charcoal wall. She found it in a warehouse. “It’s from a tin ceiling,” Morgan explains, with glee. Yet she integrated this and a hulking 9-foot armoire, painted black, with several traditional chests from her grandmother’s house.

The en suite oversized bathroom is splashed with sun beaming through high windows. Half walls protect an integrated shower fitted out with a teak bench, for a Scandinavian effect. Instead of a multi-sink vanity, Morgan chose to place two free-standing ones at opposite sides of the room.

The loft satisfies Whispering Pines’ minimum square footage requirement. Building up was cheaper than building out. Climbing the steep steps is a workout, but once up, the view through the window wall and across the lake is spectacular, even at night, with twinkling lights strung over the veranda. Another requirement, an attached garage, gave her the idea for connecting the two with a mud room.

First-time homebuilders travel a rocky road even when assisted by architects and interior designers. Leigh Morgan, Jake trotting close behind, seems to have avoided the potholes. The only glitch, she laughs, was having the right refrigerator delivered: a stainless steel two-door model (one over one, not side by side) with no exterior ice maker or water dispenser. On the fourth attempt she got what she wanted.

“The whole idea behind this house was to bring the outside in,” Morgan says. “I’m pretty content with life, but this was the icing on the cake, a healing place, calming and peaceful.

“Sometimes I want to pinch myself.”

Jake, an equally mellow fellow, concurs, as he begs a biscuit, then settles down into a faux fur dog blanket spread over the sectional and falls asleep.  PS