Man on the Move

Sometimes great events are measured in centimeters. A couple of them turned up 13 years ago.

Dr. Robin Cummings, who is now the chancellor at the University of North Carolina at Pembroke, was on his rounds, looking in on patients at FirstHealth Moore Regional Hospital. It was an early winter evening, full darkness by 7 o’clock. He had performed two heart bypass surgeries that day. Walking alongside his colleague and friend Dr. Carl Berk, an ear-nose-and-throat surgeon, he mentioned he was having trouble hearing in one of his ears. Dr. Berk asked him a couple of questions. They diverted to radiology, where Cummings had an MRI. It revealed a two-centimeter acoustic neuroma located roughly where the brain stem meets the brain.

“It was a benign tumor, which is good,” says Cummings. “Most brain tumors are not.” Surgery was performed successfully a few weeks later. His hearing was preserved to a large degree, though even that has waned in the intervening years. But the surgery also affected his fine motor skills. Cummings knew that would happen before the doctors in Raleigh made the first incision. “Where it was located, you could not have put it  in a more key place in my body to affect my livelihood,” says Cummings. After the surgery he tried to hold an instrument and focus. “My hand would shake. So, I said, ‘I’m not going back.’ I quit. I retired early.”

It wasn’t just a livelihood Cummings lost that day. That’s the dispassionate, the clinical word for it. What he’d lost was a life. An all-consuming occupation, his mission, something he’d trained for from the moment he saw a beating heart in a chest, something he practiced with consummate skill. Something that defined who he was had been taken from him by the very capriciousness of life he dealt with every day he put on surgeon’s scrubs.

“It was like going through a divorce, going through a death,” says Cummings. After he retired, he and his wife, Rebecca, would join friends for an evening and he discovered he had nothing to talk about. “I really couldn’t carry on a conversation,” says Cummings. “No exaggeration.” Normal things, the gritty stuff of day-to-day, had eluded him. Turned out, the skill set of the highly skilled was also highly limited.

“It really was about six months of going through some depression,” he says. “I remember sitting in our kitchen one day and Rebecca wasn’t there and I was just, I was screaming and shaking my hands. I don’t understand this. Why can’t I operate? Why did this happen? God-why-did-you-do-this kind of thing.”

His self-prescribed therapy was to move. Just move. Do something. And he hasn’t stopped since. It led him to the hospital’s board of trustees; to being the director of Community Care of the Sandhills; to manage North Carolina’s Office of Rural Health and Community Care; to oversee the state’s Medicaid program, delivering health care to 1.8 million people with a budget of $14 billion; and, ultimately, back home, back to Pembroke, back to Robeson County, back to the place where it all began.

Dr. John Dempsey, the president of Sandhills Community College, is a longtime acquaintance of both the Cummings. “I wrote my master’s thesis on the subject of power in the works of Ernest Hemingway,” says Dempsey. “Most of Hemingway’s characters are people who have lost one power, had it replaced by another and were far the better for the experience. And, I think in truth, that’s Robin’s situation as well. As he lost one ability, he gained others.”

Cummings grew up on a 25-acre farm in Robeson County’s Union Chapel Community, roughly three miles from the chancellor’s house on the campus of UNC Pembroke, where he now lives. His father, Simeon, was a Methodist minister. His mother, Maude, and the couple’s nine children — Robin is the second youngest — worked the farm to keep the electricity on. 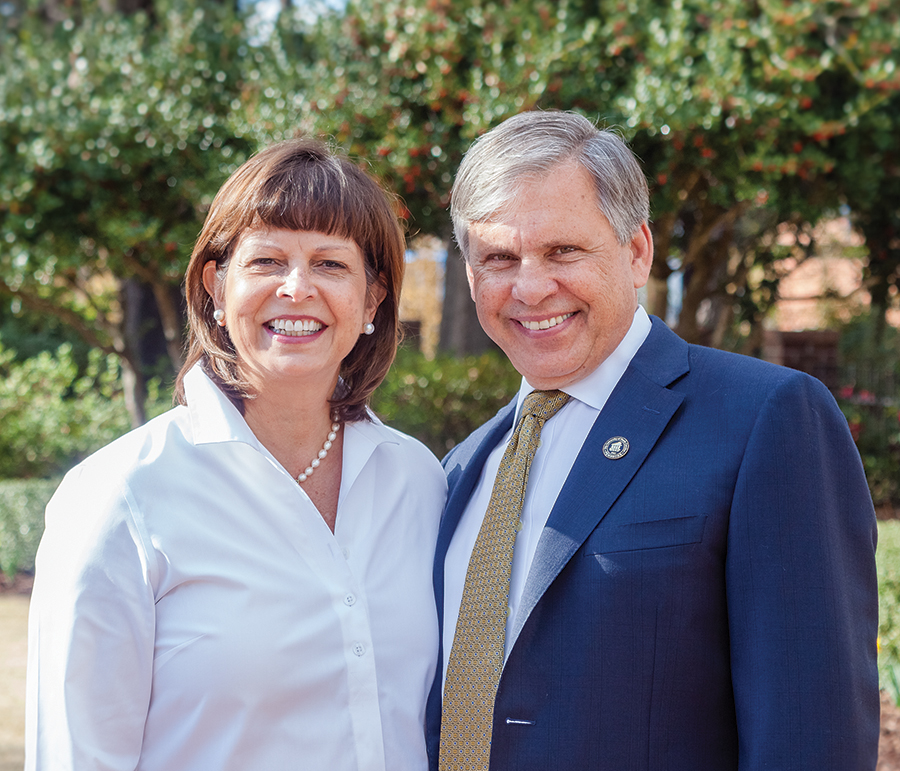 “Tobacco. Corn. Cotton. Soybeans. And cucumbers. Later on, we got into cucumbers,” says Cummings. “I’ve picked cucumbers, man, I’ll tell you. If you want to work hard, pick cucumbers.”

“Sunday Dad would preach — Sunday morning, Sunday night. Then Monday was our day to put in tobacco,” says Cummings. Snapping leaves off the stalks by hand, working from the sand lugs, the dirty, heavy bottom leaves, up on each successive Monday. Beginning as soon as it was light enough to see, getting wet from the feet up with the morning dew, then from the head down with the sweat of the afternoon sun. Their allotment was 1.5 acres. “Usually you had about six croppings,” he says. “We would get up at 4:30 on Monday morning, go to the barn, unload the barn — it’s been curing for the past week — put it in the pack house and then by 6:00, 6:30 we go to the field crop and do our acre and a half.”

Cummings’ mother graded the tobacco in the pack house, A for the golden leaves, then B and C. “She would put those in different piles and we would wrap each pile in a big sheet,” says Cummings. “One of the worst whippings I ever got was when I was jumping on the Grade A tobacco.”

When Cummings was in the 8th grade at Pembroke Middle School, he met a little 7th grader, Rebecca, who lived in the Harpers Ferry community. Both are members of the Lumbee Tribe. Rebecca’s mother worked in Converse’s Chuck Taylor plant; her father drove long haul trucks from one end of the country to the other. “She grabbed on and wouldn’t let go,” Cummings says, laughing. Now they have have four grown children of their own.

Simeon Cummings, the minister at what would become the largest American Indian church east of the Mississippi, Prospect United Methodist, was also a member of the first four-year graduating class at Pembroke, getting his degree after returning from World War II where he served — of all things — as a medic. Education was a family value. Robin Cummings went to UNC-Chapel Hill and graduated with a degree in zoology but knew he wanted to go to medical school. He took a year off when he and Rebecca were married. They also bought a car. He still has the bill of sale.

“It was a Chrysler LeBaron,” Cummings says. “My dad gave me a Toyota Celica to get through school, which broke down all the time. I took that Toyota Celica, and went down to the Lumberton Chrysler place. I didn’t know what I was doing. The salesman played me like a yo-yo. He pointed out this brown LeBaron. ‘I bet you want that car right there. Here’s the sticker price, son. That’s what it costs.’ I remember laying in bed that night and Rebecca says, ‘What are you thinking about?’ I said, ‘I can’t believe we just borrowed $4,000.’ To me, that was the beginning of our life.”

Cummings spent that year working in a dye factory, second shift, at something nudging minimum wage. “It was my first exposure to factory kind of work. What I saw that really upset me was the way the upper level people treated the folks down on the floor. I’m not talking about a racial thing. We’re up here, you’re down there. It really was caste kind of thinking. That second shift, it helped me fill out those applications and get into medical school, boy. Don’t waste time.”

The Cummings farm, most of those 25 acres, is still in the family, but the only part Robin owns is a memory. Financing for medical school came from multiple sources — loans, scholarships, what have you — but one of the pieces came from his father, the minister with the four-year degree. In the original movie The Magnificent Seven, the Mexican villagers tell Yul Brynner they’ve collected everything of value in their town in order to hire him and he replies, “I’ve been offered a lot for my work, but never everything.” One weekend back from school, in the home place on Union Chapel Road, his father handed him a check, small in the grand scheme of things but everything in other ways. “My dad took my part (of the farm) that he was going to give me and sold it to one of my other brothers to give me money to go to medical school,” says Cummings. “He was so proud.” 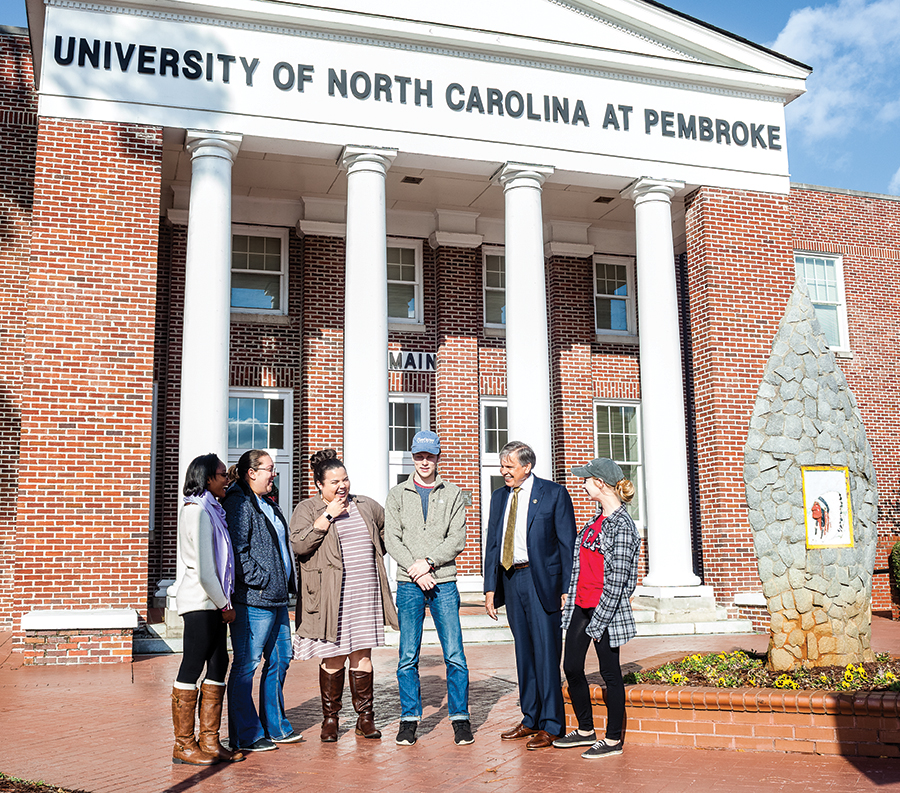 From Robeson County to Chapel Hill to Duke to operating rooms in Moore County to another one in Raleigh, where instead of giving the care he was receiving it, Cummings found himself back in Raleigh again, only this time finding a way to help 1.8 million people.

“My two years in Raleigh prepared me so well for this job,” Cummings says of his position leading UNC Pembroke. “When I went into work as Medicaid director it wasn’t what fire do I need to take care of today, it was what fire is burning hottest that will burn me up if I don’t take care of it today. Anyway, it prepared me. I dealt with bureaucracy. I dealt with politicians. I dealt with a big organization. I tell people it was a Harvard grad school education for two years, hands-on, trial-by-fire kind of stuff.”

Lacking a background as an academic administrator, Cummings was an unconventional pick to be Pembroke’s chancellor. Turns out convention isn’t as vital as leadership. It isn’t a matter of where UNC Pembroke was as much as where he wanted to take it.

“UNC Pembroke was a teachers’ college when it started. We added a school of business. We have a fairly strong arts and sciences school now. Nursing has come on. How do we retool ourselves for the future? What are the degrees that UNC Pembroke should be focusing on? How does this university serve this region? Here’s this great, wonderful university, yet we’re located in the poorest county in the poorest part of the state and we’ve been here 129 years. That doesn’t make sense, folks. This is this region’s university. Look at Buies Creek. Take Campbell University out of there and what would it be? Imagine if we could put that kind of machine here in southeast North Carolina. We would change the dynamics of this region in an incredibly good way.”

The university has developed a dual degree program with the North Carolina State University College of Engineering. The recently passed educational bond has earmarked $23 million for a state-of-the-art school of business. The building will actually cost $36 million, but Cummings views the fundraising challenge as another opportunity. They hope to break ground next year. They’ve created a program in collaboration with the NC State School of Veterinary Medicine, one of the hardest post-graduate programs to access in the nation.

“The honest truth is, of all the things we are for our institutions,” says Dempsey, “probably foremost among them is cheerleader. I think Robin is a great cheerleader for UNCP. He understands the political process because he worked in Raleigh. He does understand, I think, what it means to deal with very strong personalities. He is nominally in charge but just as the real work at the hospital is done by the doctors and nurses, the real work at the university is done by the professors and counselors. He is learning that you lead these institutions by cajoling rather than by declaring. Not ever to underestimate the importance of a cardiac surgeon, but the hearts and minds that Robin is touching now at UNC Pembroke are certainly equal to those that he touched in his career as a surgeon. I couldn’t be more impressed. He’s always upbeat. He’s always looking to the future.”

And still on the move.  PS

Jim Moriarty is senior editor of PineStraw and can be reached at
jjmpinestraw@gmail.com.