The halls are alive, with the sound of . . . a new generation

Ah, the good old days, the Roaring ’20s, when Southern Pines throbbed with urban intelligentsia wintering in cottages and mansions — the most prestigious built by New York architect Aymar Embury II — while they partied with author James Boyd’s coterie. Picture life in the Gatsby era as described by F. Scott Fitzgerald, a Boyd house guest. Perhaps he strolled over to Loblolly. Embury had taken on this second project for James’ aunt, Helen Boyd Dull, in 1918. Auntie Helen, founder of the Southern Pines Civic Club, christened it Loblolly, honoring the indigenous pines which she had lobbied her father to save from the booming turpentine industry.

Nearly a hundred years after Helen Dull’s death in 1924, ghostly echoes of Jazz Age soirees, heated discussions and philosophical musings compete with the barking of five dogs and the laughter of three small children kicking a soccer ball or playing fort in the bamboo grove. 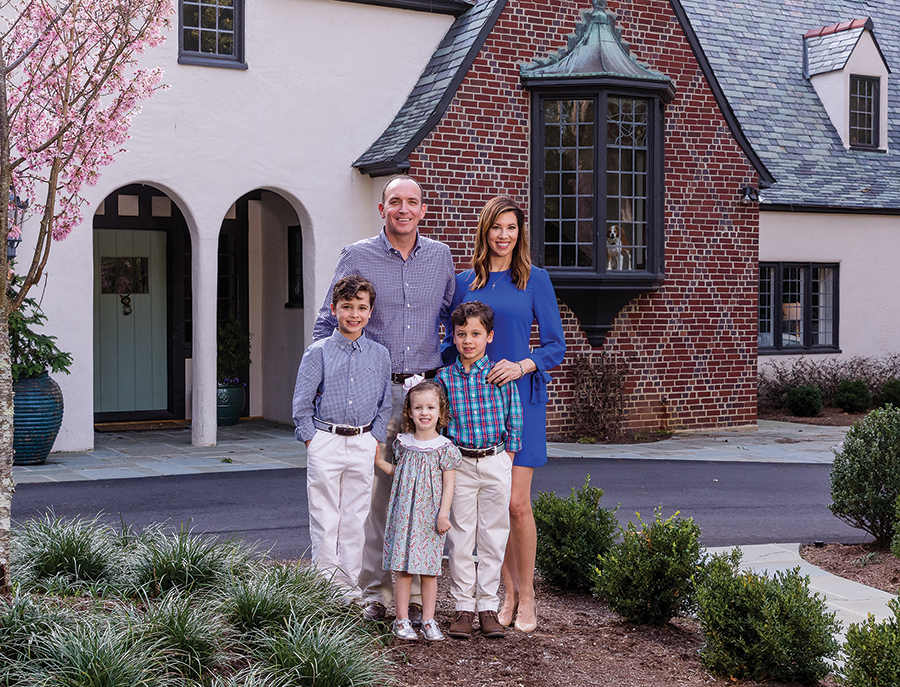 Loblolly, purchased by Erin and Mitch Lancaster in 2011, is once again alive and lively, like a fashionably dressed dowager whirling across the ballroom floor in the arms of John Travolta.

Possible, since Loblolly actually has a ballroom — or so it was called.

“We call it the Big Room,” Erin says. Indeed, at 7,000 square feet total, big is Loblolly’s operative word. The house, including two guest suites with kitchens, sleeps 14  comfortably. The Lancasters have hosted a wedding on the terrace, with reception complete with dance floor in the Big Room.

The stock market crash and ensuing Great Depression silenced the ’20s roar, but Loblolly stands witness to the history that shaped Weymouth Heights. 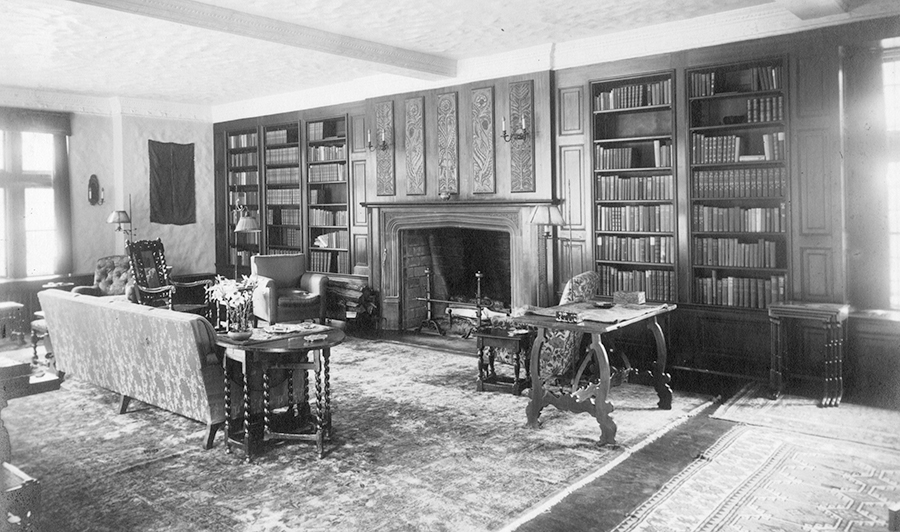 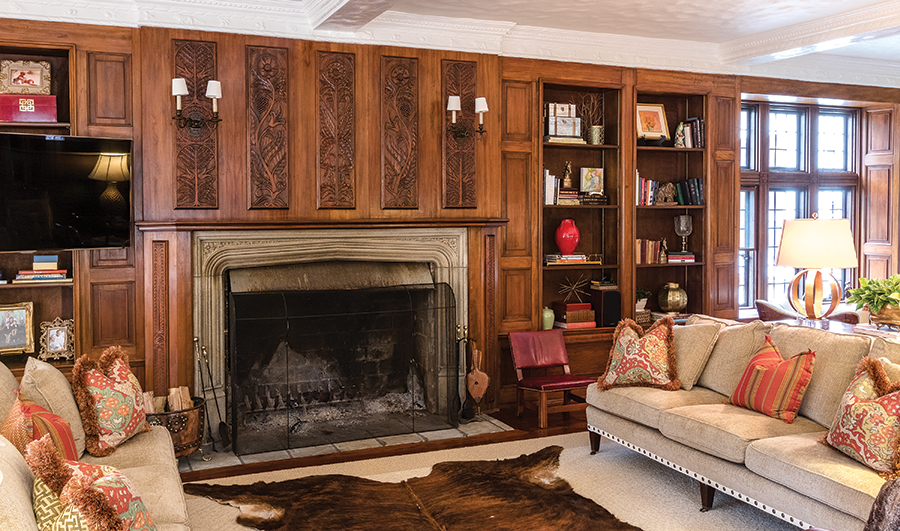 When James Boyd lured his Princeton classmate, already a “society architect,” to Southern Pines no architectural style prevailed in the nascent enclave.  While Embury developed the Boyd homestead as Classical Revival, he shook, not stirred, Loblolly. Instead of a rectangular footprint the house stretches longitudinally as far as the eye can see.  Sources provided by the Moore County Historical Association describe it as “recognizable but difficult to define, not quite English Norman cottage, or French, not Art Nouveau — with stuccoed clay tile, checkerboard brick, bell-cast and hipped and gabled slate roofs with tile ridges.” Which boils down to a divine mishmash that established prototypes influencing subsequent homes in growing Weymouth Heights.

After Mrs. Dull’s death, Loblolly was sold to the Vale family, who retained ownership until the 1970s. A fire in 1926 caused the Vales to hire Embury to rebuild and add the ballroom wing.

The tennis court is gone, the swimming pool filled in, the acreage divided.  Inside Loblolly seemed dark and imposing by today’s standards, with its hewn beams, teak and walnut floors and miles of built-in bookcases — hardly a tempting project for a young family. 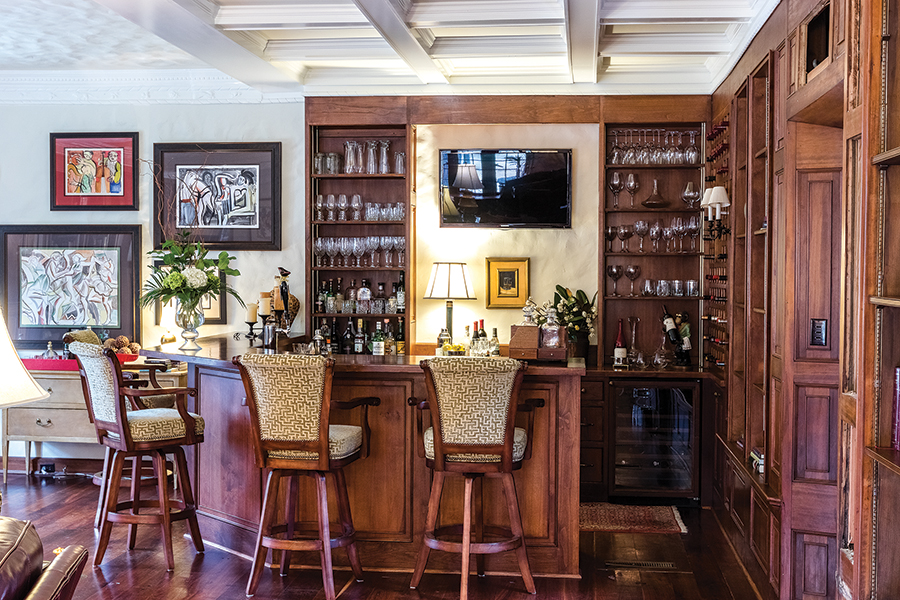 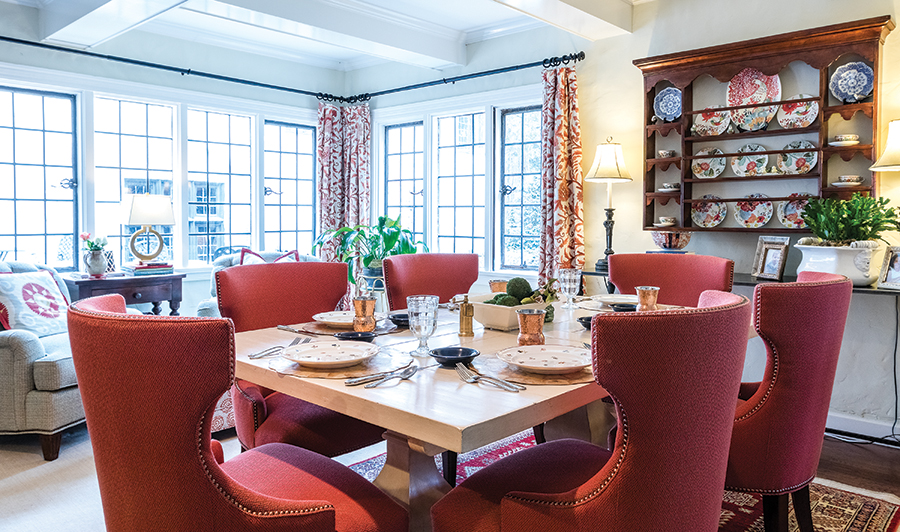 “I didn’t even want to move (to Southern Pines),” Erin Lancaster says. She is from Richmond, Virginia, Mitch from historic Windsor, North Carolina. They met in Raleigh. His parents lived at Woodlake. The young couple, then with a baby and toddler, were looking to relocate — a possibility, since Mitch operates his businesses from home.

“We were visiting friends and loved the idea of walking downtown,” he says. For fun, they looked online. Loblolly popped up. That was on a Sunday. They viewed the property on Tuesday, made an offer on Friday, which was accepted the following Sunday.

“Not much had been done — it needed a few upgrades,” Erin remembers, charitably. “It had that ’80s look, with faux marble.” The Lancasters knew what might be involved from remodeling their Raleigh home. Full speed ahead — systems and big jobs first.

But making a historic property livable and practical goes beyond fresh paint and new carpet. “We wanted it to be comfortable, not stuffy,” Mitch says. In other words, Erin adds, no no-touch zones. 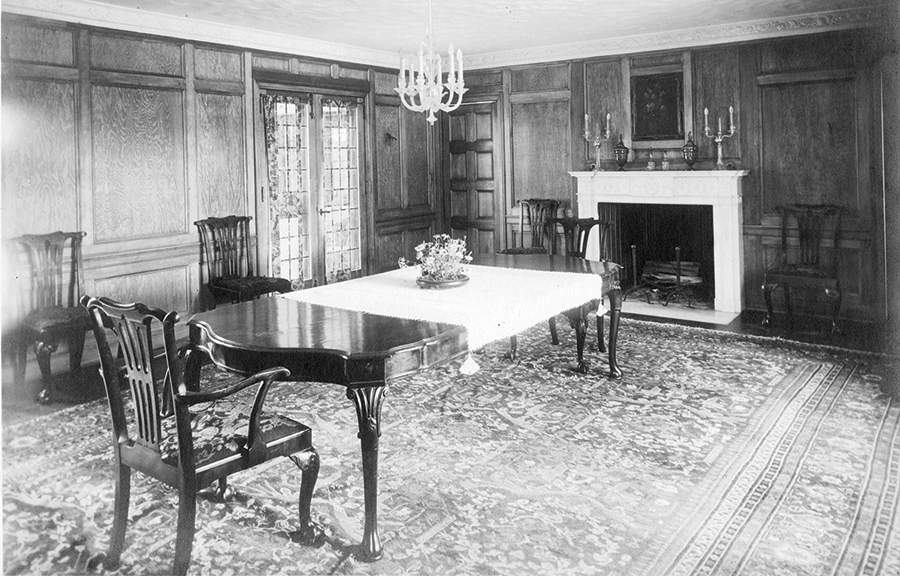 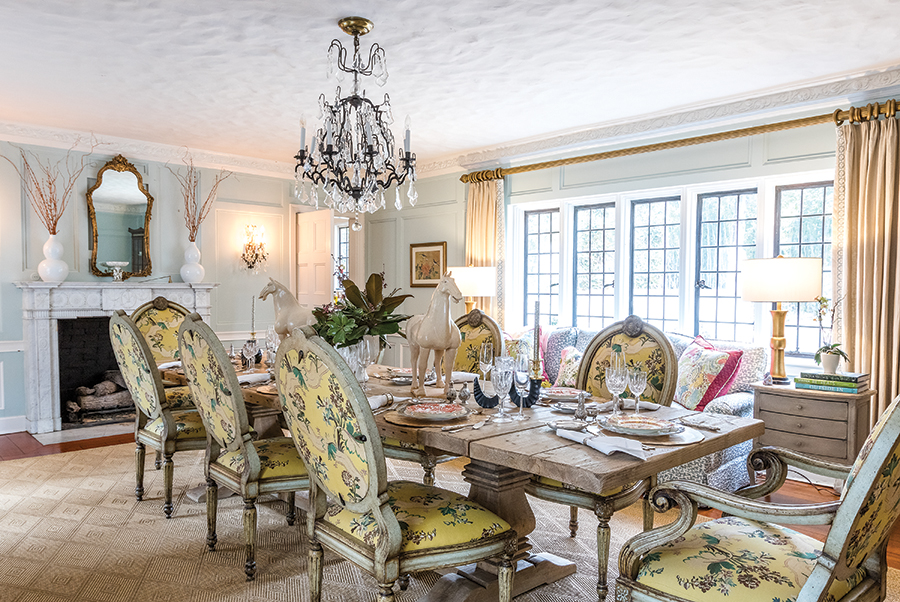 For participants in the Southern Pines Garden Club Home & Garden Tour on April 14, a walk through the Lancaster-era Loblolly will be a magical mystery tour, beginning with a dark, wide, slightly monastic foyer whose only decoration is Erin’s favorite Biblical verse, from Isaiah, stitched on fabric in the shape of a cross, framed, and hung on the wall — her talisman. To the left, through a paneled round-topped door is the formal living room with beamed ceiling and an entire wall of bookcases, also of dark woods, which convey a library effect.  The Lancasters call this the Christmas Room, perfect for their big tree.

“We wanted traditional (furnishings) to match the house,” Erin says. What they brought from their previous home fit beautifully. High-backed upholstered chairs, a circular upholstered coffee table/ottoman, her desk and side pieces — even a bread trough under a window shelf — are oversized to match the living room’s dimensions. Yet, she reports, the kids have enough space to run laps around the sofa. 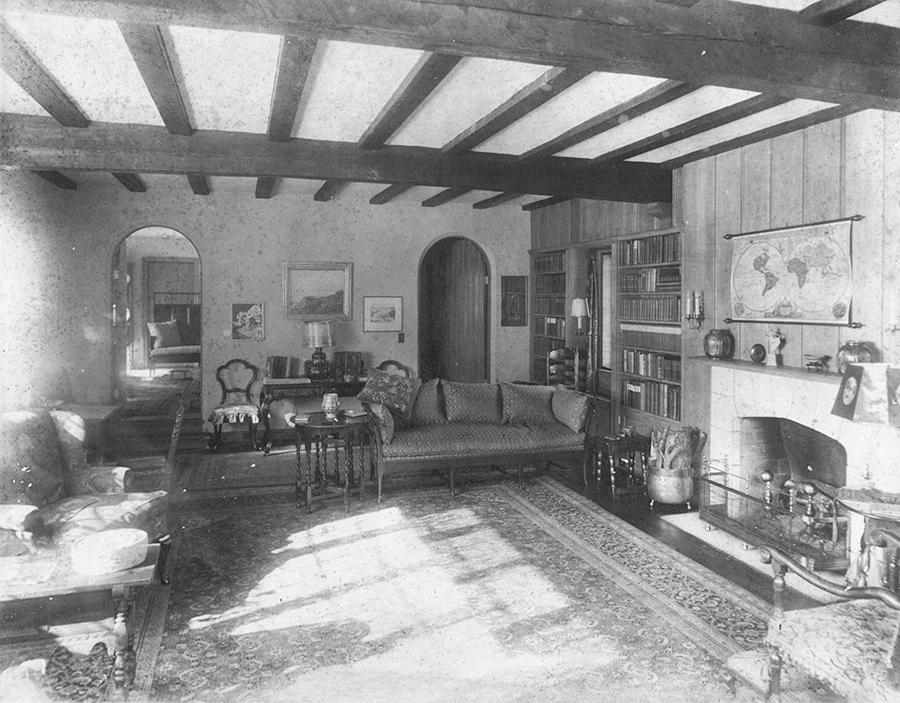 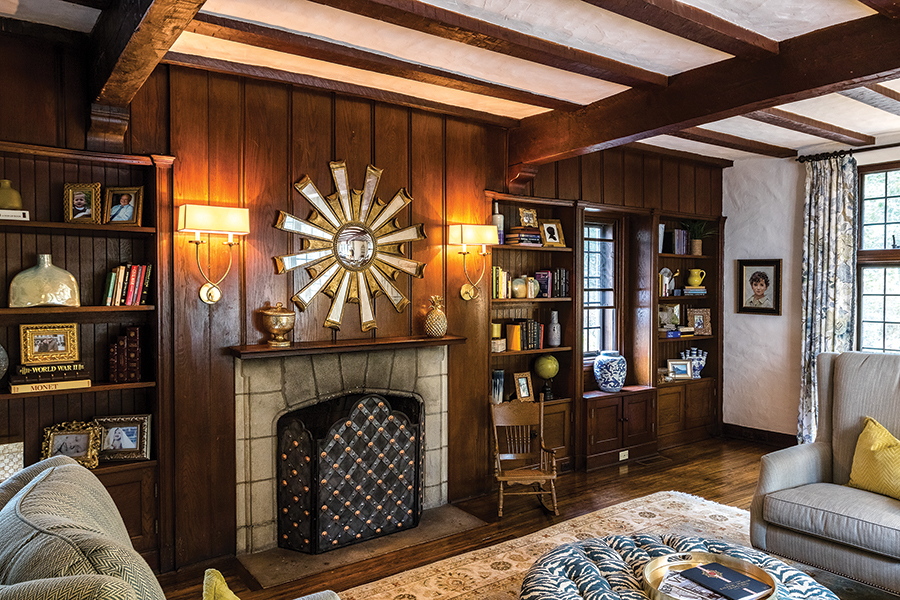 Erin’s interior designer, Susan Brown of Raleigh, chose light solids and patterns (some classic Schumacher) for upholstery and drapes to relieve the dark paneling and floors, which are original, gorgeous and sparsely covered by Orientals.

“Susan worked with me on our house in Raleigh,” Erin says. “She knows me so well.”

Nowhere is the scale of Loblolly’s original footprint more evident than in the dining room, which accommodates 12-foot table, a full-sized sofa under the window, an exquisite French china cabinet filled with Minton bunnies (Erin’s trademark) and other pieces without crowding.

Here, Susan and Erin created a wild juxtaposition that works: The tabletop is made from wide, roughly textured planks while the Papa Bear-proportioned chairs have ornate French Provincial frames upholstered in a floral fabric. Under the table, a sisal all-weather rug, in neutral sand because, Erin points out, “The kids run through here on the way to the kitchen.” 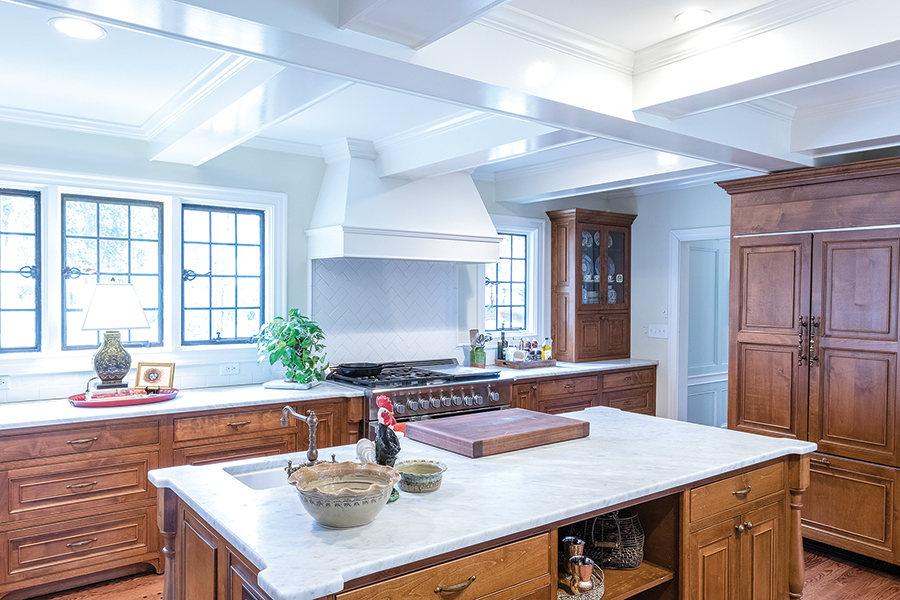 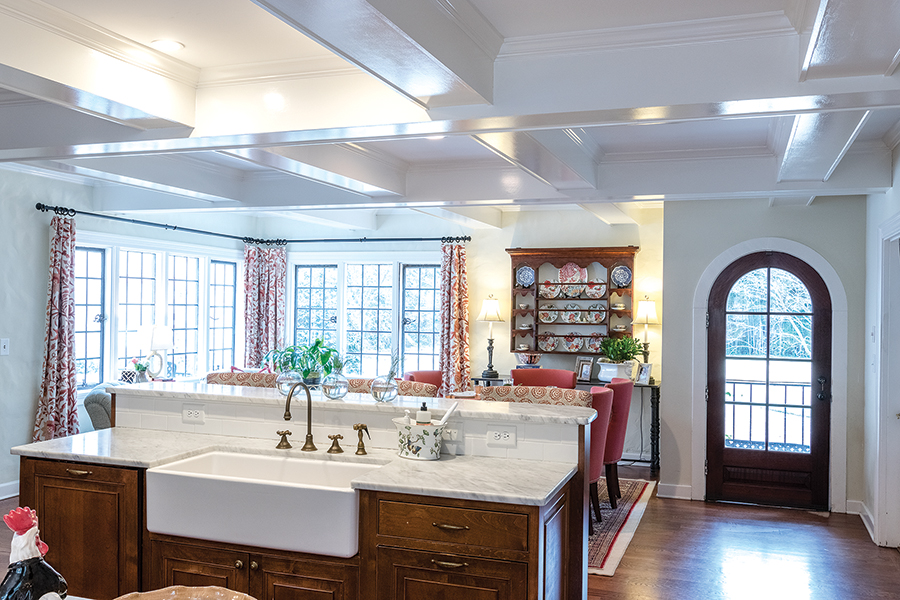 The kitchen, of course, required gutting. A small bedroom and pantry behind it were removed to open up space for a family sitting/dining area. The kitchen itself displays an unusual arrangement of two parallel islands, with sink on one and range, ovens, refrigerator against the walls. Carrara marble tops the massive bureau-style walnut cabinetry. A ceramic tile backsplash adds another texture. “Mitch has the good brains about how a kitchen functions,” Erin says, understandable since he’s the family chef.

When it comes to colors, Erin and Mitch part ways. She adores the pale aqua predominant in the dining room and on some fabrics. He likes red. Erin and Susan Brown have softened his bright primary into a rosy rust, which lives peaceably with Erin’s choice throughout the house, but especially in the family dining area.

The Big Room, sunken a half-dozen steps below the main floor, elicits disbelief. Approximately 40-by-25 feet with a high ceiling of the same undulating plaster, built in bookshelves lining two walls, paneling elsewhere, a wood-burning fireplace and two TVs, the space is arranged as the baby grand piano area, the conversation area and the bar added by the Lancasters, where a small kitchen with dated metal cabinets once stood. Beside the bar, a grouping of two pale yellow leather chairs, made in New Zealand, seem lifted from a modern art museum. “We were at a gallery in Las Vegas, looking for paintings,” Erin explains. “Mitch saw the chairs and sat down on one. He said, ‘Oh, these are comfortable.’” Others have noted that Elvis might share his opinion. 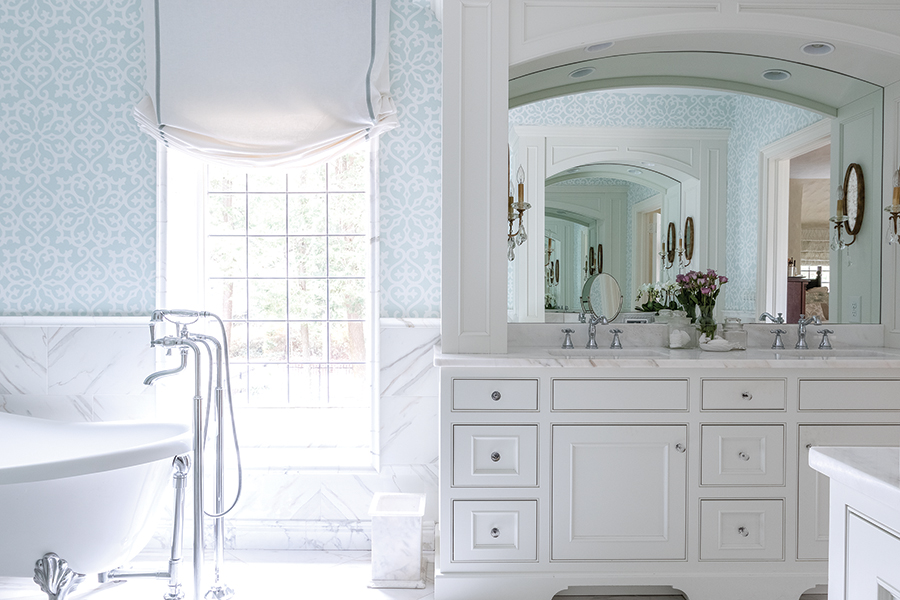 Loblolly has no grand staircase. The elevator has been removed. The second floor remains a maze of wings and narrow hallways, dormer niches with light streaming onto a heirloom slipper chair or table. But the bedrooms (eight, total, including the garage apartment) are enormous, with window seats and sitting areas. Son Milum’s room has two four-poster beds from Mitch’s childhood, while daughter Beverly uses Erin’s small  chests of drawers and plays with her mother’s stuffed bunny collection. The kids have a designated Lego room. One small bedroom has become Erin’s closet/dressing room. At the end of the hallway the master suite with soaring ceiling and windows on three sides looks out over terraces, gardens and two-plus fenced acres bordered by ancient trees — another world, another story

Loblolly represents not only an extinct lifestyle, but materials and workmanship impossible to duplicate. The trick is dressing old bones in new clothes. “We’ve been chipping away at it for seven years,” Erin says. “We’re about halfway done.” During that time, the Lancasters had a third child, adopted several rescue dogs, enticed Erin’s sister and her family to a house down the road. Mitch entered city politics. And a renewed Loblolly is once again the scene of dinner parties, meetings, play dates and social events. 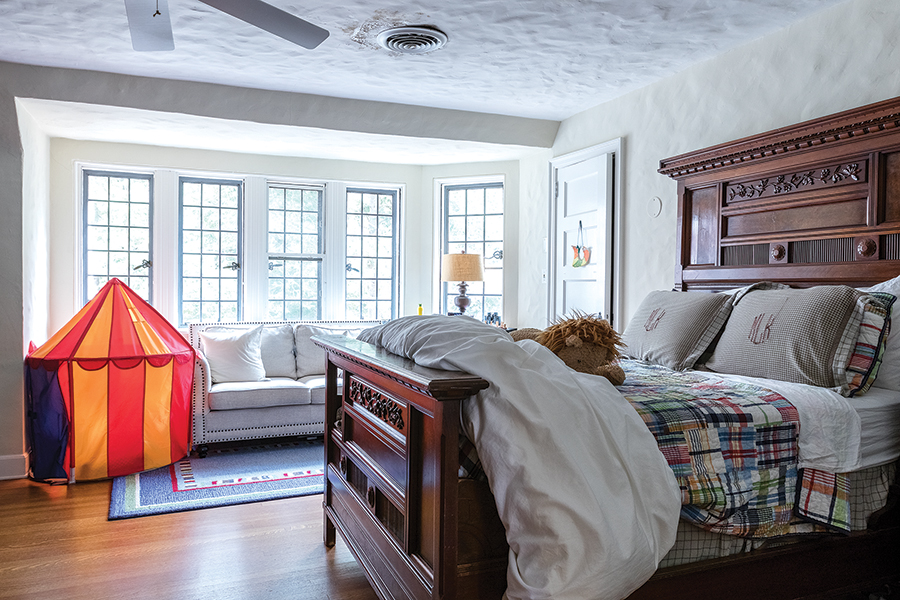 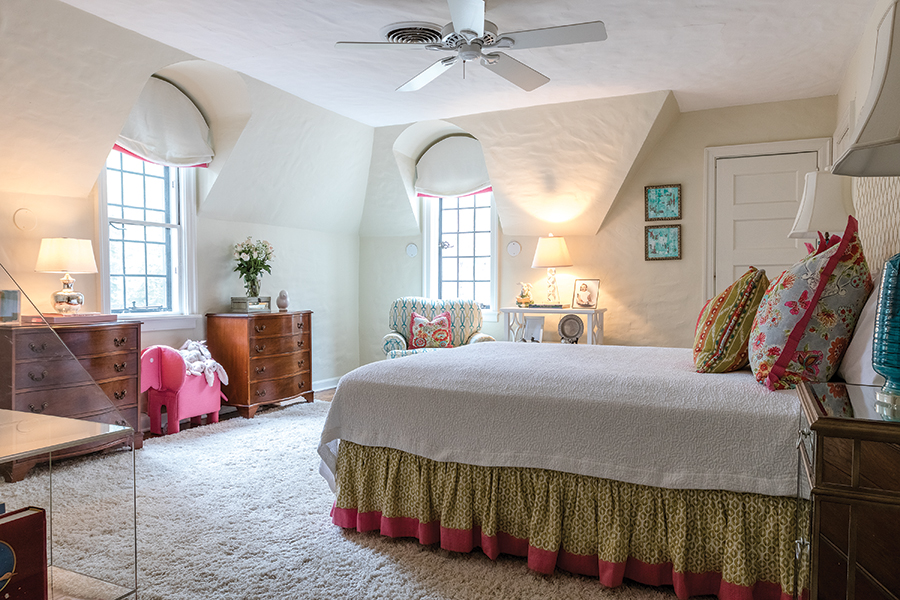 “It’s a God thing that we ended up down here,” Erin concludes. “OK, here’s your path, God told us. So if this is where we’re supposed to be, let the house pass inspection.”

Loblolly is one of six homes featured on the 70th Annual Southern Pines Home & Garden Tour, from 10 a.m. to 4 p.m. Saturday, April 14. Also included, an exhibit at Campbell House recounting how club members shaped the landscape of the community through their projects and initiatives. Proceeds from the tour support local beautification and horticultural scholarships. Tickets: $20 in advance, $25 day of tour (at sites). Advance tickets are available at The Country Bookshop in Southern Pines and Pinehurst Woman’s Exchange, or through the club website: www.southernpinesgardenclub.com.