If the shoemaker’s children shouldn’t go barefoot, neither must an architectural designer’s family suffer an ordinary house. What Mark and Kathie Parson have done to a humble 1940s bungalow on the outskirts of the village of Pinehurst is the glass slipper on Cinderella’s sooty foot, the genie in the mayonnaise jar. Not only has Mark designed a compound housing three generations, he has paid homage to the St. Andrews Links in Scotland by reproducing narrow, curving canals through which flow gurgling water, set on putting-green grass, in a rear courtyard.

He also designed and installed the landscaping, including details like leaving a narrow band of soil between a brick walkway and low wall, allowing ficus vines to root and creep.

“Houses don’t have DNA,” he reasons. “We had to give it character.” Knocking the bungalow down would have been easier. “But then you wouldn’t have a good story.”

Mark Parson is full of surprising stories, starting with self-training. Then, his unlikely success, evidenced by hardscape and softscape designs for Sandals Caribbean resorts, Miami Beach mansions and a prize-winning Harley-Davidson dealership. Locally, besides residential projects, he transformed an unsightly garage on Broad Street into The Sly Fox gastropub. 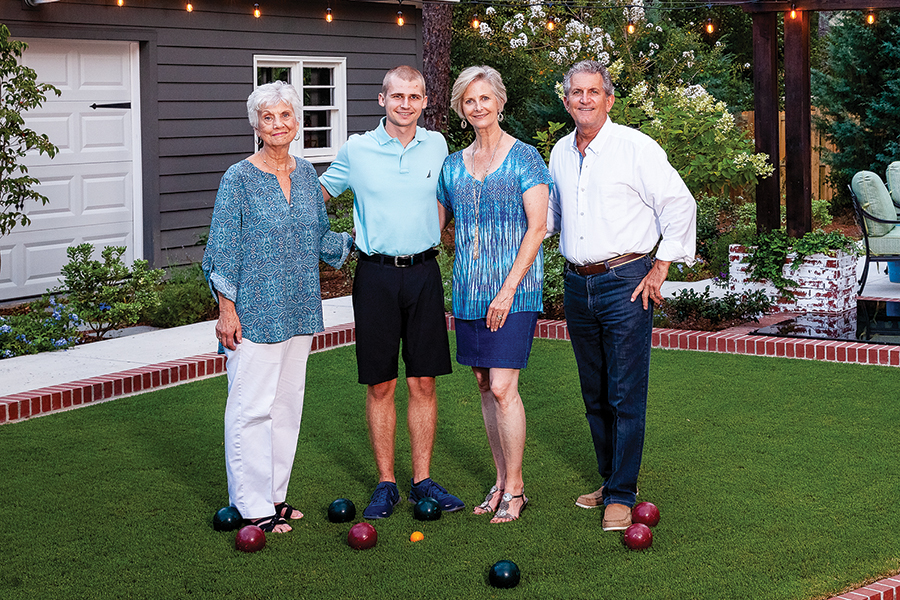 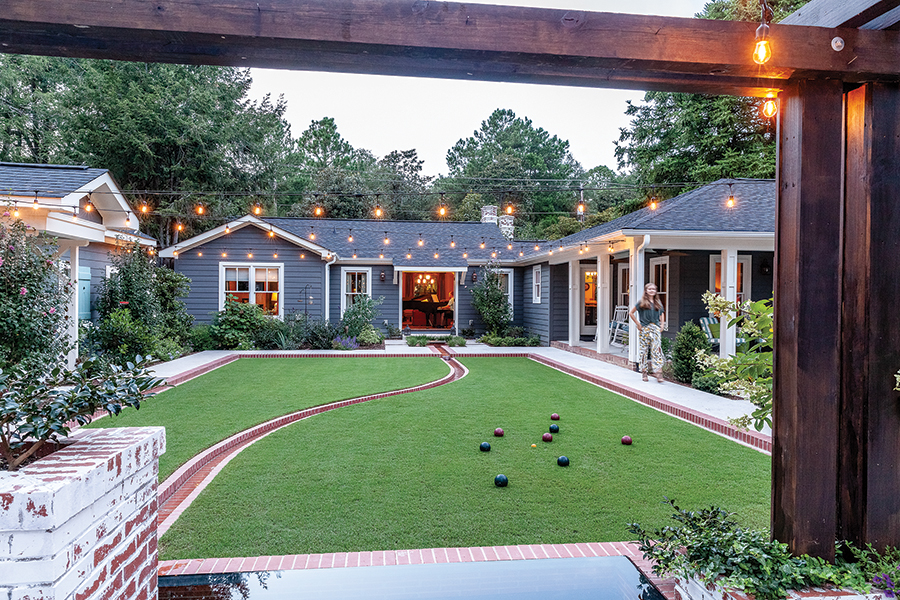 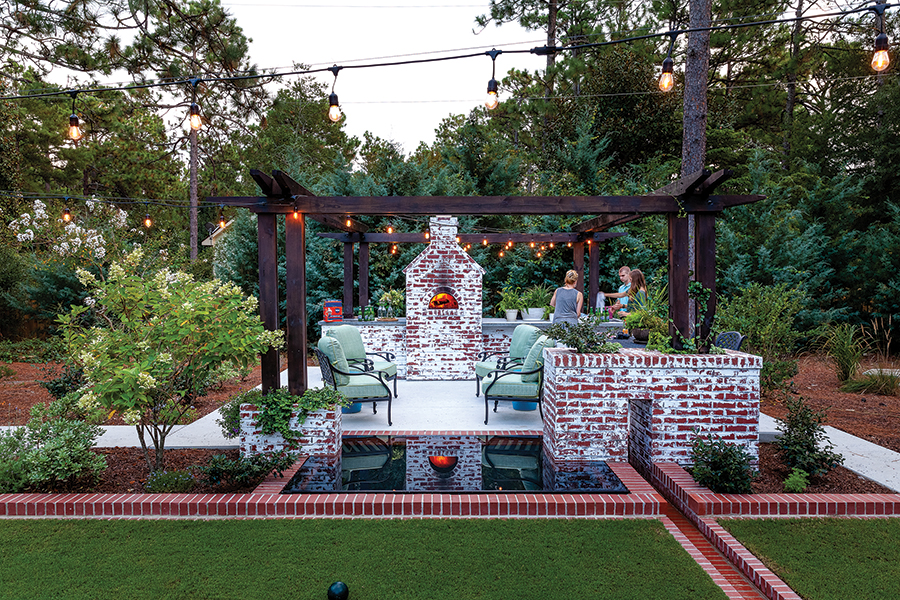 To Kathie go accolades for the floorplan and décor, her taste honed as a designer/manager at Bloomingdale’s in Miami, where they met. Kathie is from Minnesota, Mark from (he wrinkles his nose) Ohio. She grew up in an apartment; he in “a shoebox.” His upward mobility could have been written by Twain, or O. Henry. In part: “My father was a union guy at Chrysler. I framed houses, worked in a sheet metal shop, welded, worked as an orthodontist’s assistant —all that hands on stuff.” But, despite dream jobs like being flown back and forth to Sandals Royal Bahamian Resort in Nassau, he and Kathie, new parents after many years of marriage, opted out of the glam lane and chose North Carolina — first Shelby, then Asheboro. While participating in a Richard Petty charity ride, Mark discovered Pinehurst. “I had heard of (Frederick Law) Olmsted. The real draw was sandy soil and people from everywhere.” People who appreciated and could afford imaginative renovations/new construction.

Kathie looked at the village of Pinehurst, drove over to Southern Pines and decided this was where she wanted to be a stay-home mom.

In 2003, they bought two houses on Everette Road, one for them, one for Kathie’s mother. The plan: Put both on the market and remodel the one that didn’t sell.

Remodel is hardly the word. Mark, as architect and general contractor, took the 1,100-square-foot house down to the studs and dirt floor. The phoenix that arose, double in size, had a new wing, a living room delineated by columns, a kitchen with corner banquette eating area but, strangely, no dining room.

“We eat everywhere,” Kathie says. Walkabout fajita parties inside and out are more likely than sit-down dinners. One Thanksgiving they served on the front patio, which has a fireplace, and beside it, a salad garden. Out back, beyond the reflecting pool, is another dining area with grill and wood-fired pizza oven.

The reasoning goes deeper. In the dining room space stands a grand piano played by 18-year-old Wyatt, a serious musician who started on a keyboard and progressed to this magnificent instrument. Beyond it, windows and doors overlook the grassy courtyard. Entering the front door, a person’s eye is drawn forward by the piano and beyond, to the garden, which was Mark’s intention. A hallway to the right — previously two bedrooms and bath — has been reconfigured as a master suite with dressing room and Kathie’s office. In the bedroom, wide-board knotty pine floors used elsewhere yield to velvety-thick moss green carpet, the whole resembling a fine hotel. 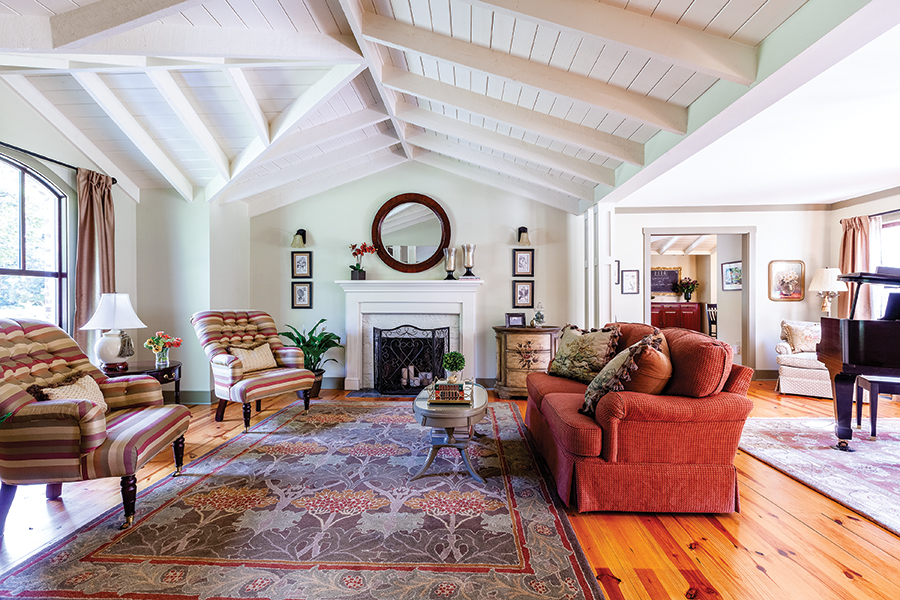 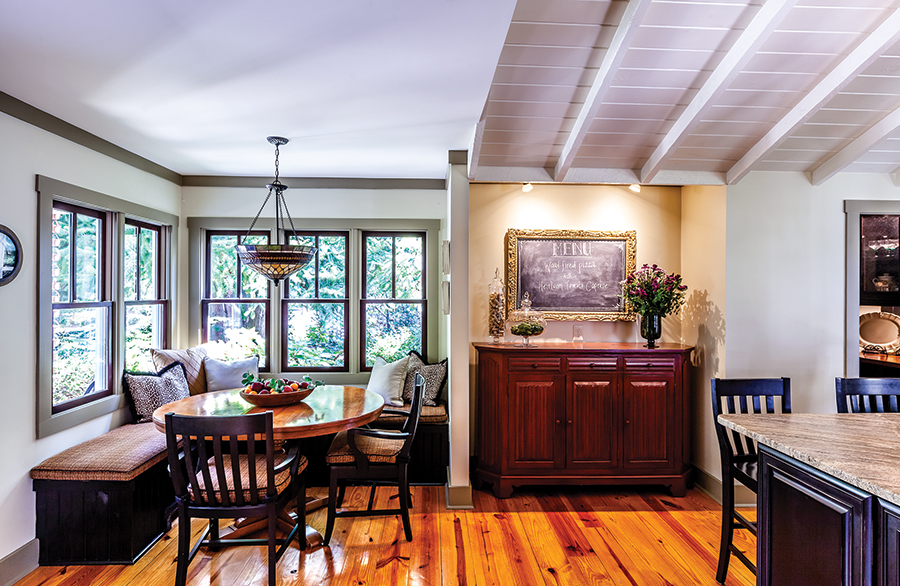 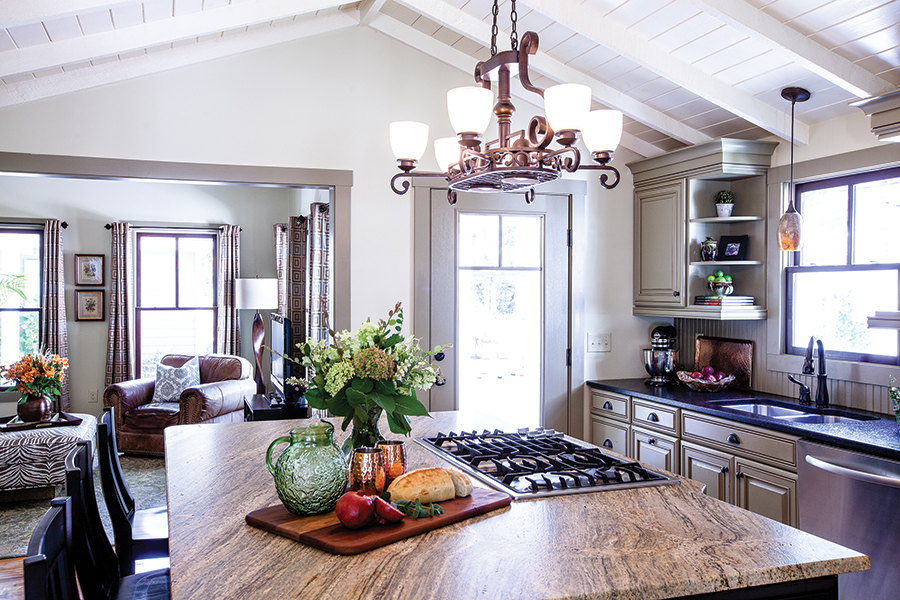 “People gravitate to the kitchen,” Mark continues. With this in mind, he designed a beauty and elled a wing around it with two more bedrooms, a bath and moderately sized den.

The moss green coloration that permeates each room has followed them from house to house. Kathie finds it soothing. She drew complementary forest tones from a printed fabric brought from Florida and used to upholster the breakfast room valance. Even the granite kitchen island has a green-gray tinge. Elsewhere, old leather couches, rather formal tables and chests, and heavy sateen drapes convey elegance. Kathie and Mark both prefer mahogany and other dark woods for their richness and antiquity which, Mark says, echoes Pinehurst. In contrast, rather than elaborate crown moldings and door frames, Mark chose simple flat stock painted a darker green, while several chairs upholstered in bold stripes speak contemporary Scandinavian. Art is mainly florals or landscapes, which blend with upholstery and rug patterns.

Although family heirlooms aren’t part of the scene, Kathie and Mark planned a kitchen alcove to accommodate a massive sideboard Mark’s mother painted. Above it, a blackboard framed in curlicue gold announces the dinner menu: wood-fired pizza.

Every designer has a signature that follows him or her from project to project. Mark is a ceiling guy. “I want people to look up. Why do you think churches have steeples?” Angles and vaults have become his trademark — in the family room, paneled in cedar, they suggest a dome. The living room gabled ceiling is accomplished with cottage-y painted tongue-and-groove boards. Mark indulged himself with the curving canals bisecting the courtyard, strewn with bocce balls, also a tiny waterfall on the front walkway, because he likes the sound. He tucked two butler’s pantries into the layout and, as the family cook, fine-tuned the kitchen.

The sweetest surprise stands beyond the back gallery: a free-standing storybook Nantucket cottage with flowers spilling from window boxes. Mark built it for his beautiful 82-year-old mother, Ila Parson. 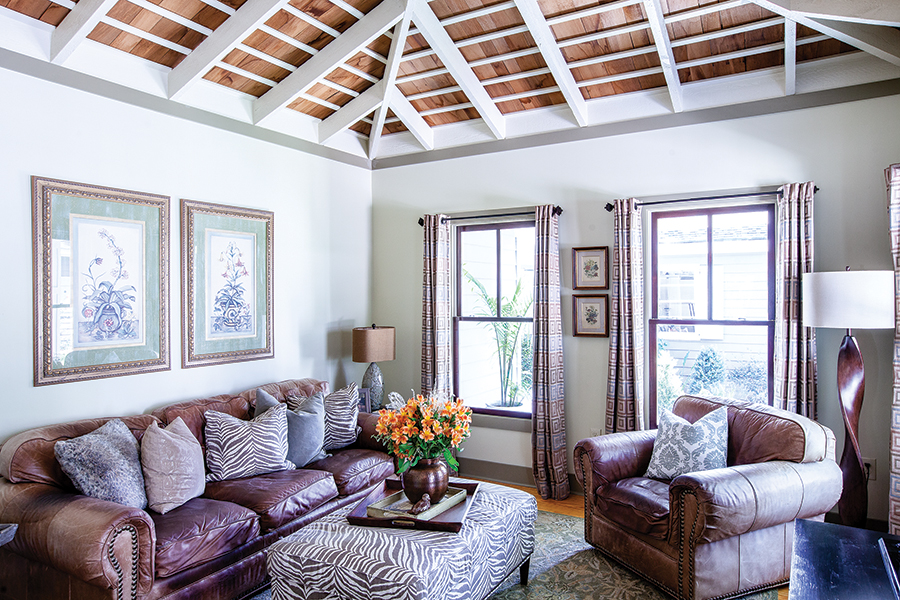 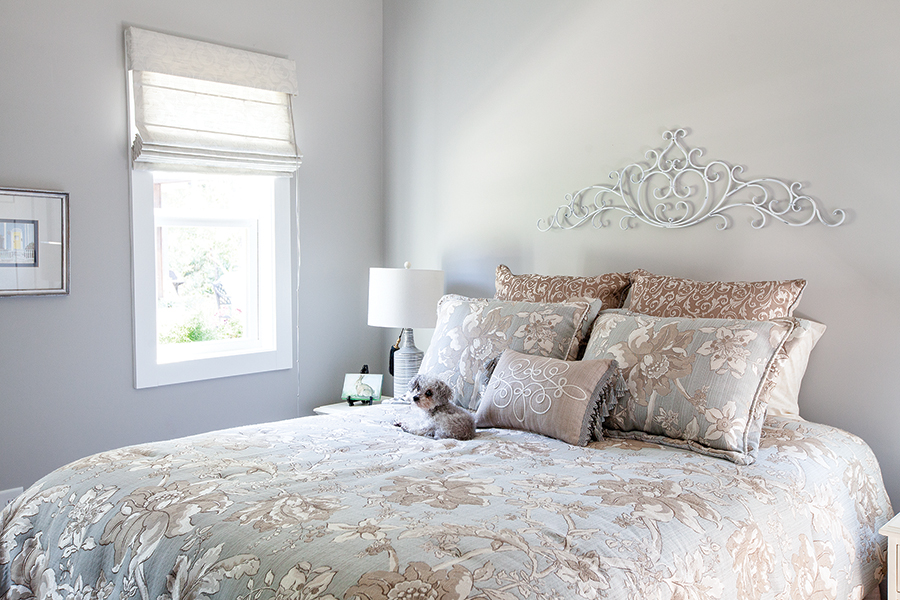 “She raised me,” he says, reverently. “I can see her when I’m standing at the kitchen sink and she’s sitting in her living room. We wave every night before I go to bed.”

Family dynamics influenced the project. Ila Parson lives independently with a 17-year-old teacup poodle. She drives her own car, prepares most of her meals and walks miles every day. “We’re careful not to get in each other’s way,” Ila says. Kathie adds, “Mark had to think how to incorporate his mother’s lifestyle with ours, our son and his friends.”

Ila’s most frequent visitor is grandson Wyatt; proximity has fostered a close relationship.

Ila prepared for the move by getting rid of almost everything in her Village Acres house, then choosing simple new furnishings in refreshing blue, white and gray. The 740-square-foot cottage has one bedroom with, typically, a vaulted ceiling; a bathroom, kitchen with breakfast bar, sitting room and screened porch. Tucked behind the main house, this tiny domain is quiet and practically invisible from the street.

Barefoot? Hardly. A smart shoemaker’s children wear his best styles for all to see, to covet. Mark Parson’s home and grounds showcase his design capabilities for customers. Otherwise, Kathie says, “This house is everything we didn’t have.”

Remember, Mark’s goal was to create a story for a house that — unlike others in historic Pinehurst — had none.