Finding time to find the game

Long before COVID-, social distancing, tissue-hoarding and obsessive hand-washing gripped our very existences across America and beyond, I enjoyed a week of a self-imposed quarantine, specifically, the Thomas Wolfe Room at the Weymouth Center in Southern Pines.

In June 2019 I was fortunate enough to secure a week’s stay at the Weymouth Writers-In-Residence program, which has been running since 1979, when Sam Ragan, the center’s director, conceived the program. Given that Weymouth was once owned by novelist James Boyd, Ragan thought the rambling old mansion would be an ideal venue for North Carolina writers to hole up and work on their novels, poems, short stories, screenplays, what have you.

There should be muse in abundance amid these rooms and acres “where sparks of creativity could be struck,” in the words of Katharine Boyd, James’ wife.

After all, in this house Boyd conceived and wrote his acclaimed and best-selling book, Drums, a Revolutionary War saga published in 1925, and others like Marching On. Curiously, he didn’t type them or scribble them by longhand; he dictated them at a stand-up desk in a study that now serves as the N.C. Literary Hall of Fame room. And on this sprawling estate he and Katharine entertained literary giants like F. Scott Fitzgerald, Paul Green and Wolfe, who came for three days in January 1937.

I had two golf books going at the time, so what better venue to percolate my thoughts? Five miles to the west was the first tee of Pinehurst No. 2, Donald Ross’ tour de force that has hosted three U.S. Opens, one Ryder Cup and a PGA Championship. One mile to the south was Southern Pines Golf Club, another Ross design with more than a century of history. Within a half-hour radius were nearly three dozen courses, from upscale private clubs designed by Tom Fazio at Forest Creek to idiosyncratic daily-fee designs like Mike Strantz’s Tobacco Road.

And just out my window was the land where over a century ago a nine-hole course called Weymouth Woods had been laid out.

“One of the finest private golf courses to be found in the state — perhaps the South,” it was described in 1910. “It is conveniently and beautifully located, a little east of the house, has a good turf and is as handsome as a framed picture.”

James Boyd was a noted Pennsylvania industrialist who bought the land in the early 1900s and created a 1,200-acre estate, naming it Weymouth in tribute to the seaside village in England. He commissioned the construction of the golf course (details on builder, designer and time frame are sketchy), but it eventually took second fiddle in town to Southern Pines GC, which was formed in 1906. In time the property passed to Boyd’s grandsons, Jackson and James, and James in the 1920s retreated to Weymouth and expanded the original home into the grand manor house that exists today.

The latter James Boyd was not a golfer, preferring equestrian and hunting sports, and founding Moore County Hounds, which exists today. He let the course go to seed.

“Golf is merely the most expensive and depressing form of pedestrianism,” Boyd wrote. “I know of no other practice, except the purchase and consumption of bad liquor, wherein good money can be spent for so pitiable a result.”

I beg to disagree, certainly, and spent my week at Weymouth reveling in the game to varying degrees, from spending the days with my fingers splayed across my laptop keyboard, and early mornings and evenings wrapped in this convergence of history, ambience and the spirit of golf. I brought plenty of reading material as well as a curious strap to work on keeping my arms and elbows connected should I hit some practice shots. 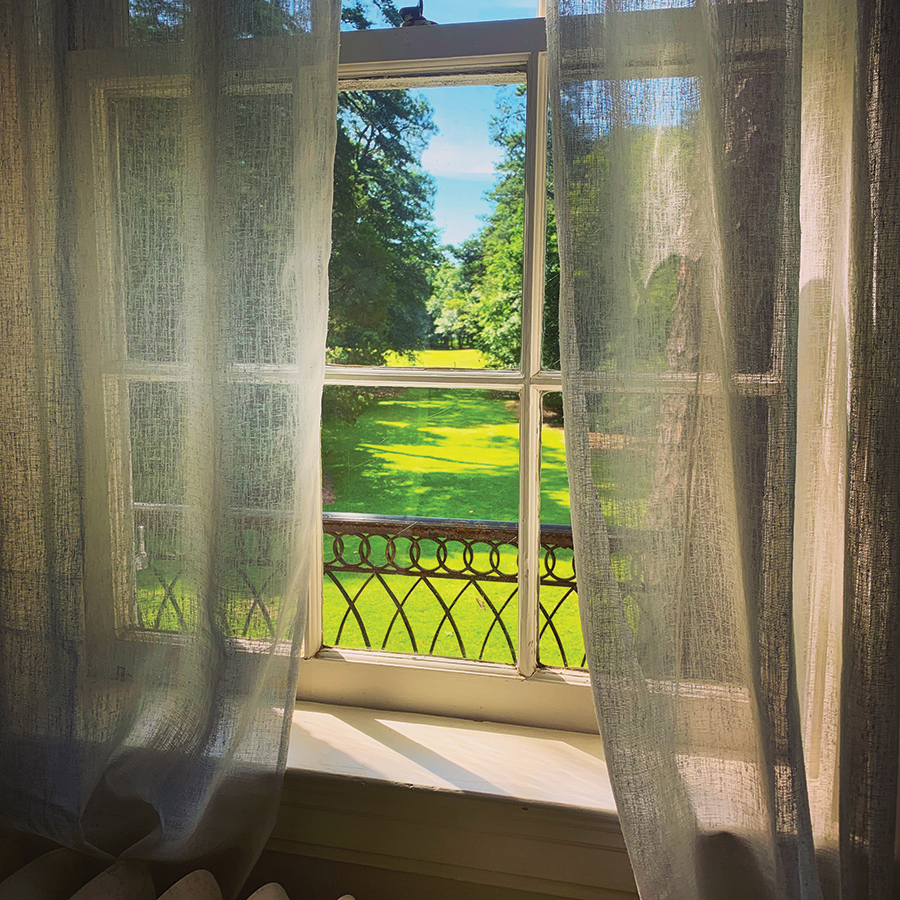 Early one morning I ventured down to Southern Pines GC with the idea of playing a quick nine before hitting the grind. I schlepped my bag on my shoulder and took off on the course completed by Ross in 1923, then remembered that the ninth hole doesn’t return to the clubhouse, a sure sign that the routing’s as pure as the land and architect’s eye would allow. No telling how many bad holes have been forced the last century by the purely American contrivance of returning the front nine back to the clubhouse.

It’s a brisk walk, the numerous inclines in the ground challenging my stamina, but the short distances from greens to tees of the vintage course giving some energy back. My game is properly tasked — trying to nail a draw on the par-5 fifth hole for extra carry, for example, and dial in short irons on the par-4 eighth and 10th. Nearly every green requires precision to imagine and execute a recovery if you’re off to the sides. The lake serving as anchor on the eighth through the 11th hole glistens in the early morning light.

At twilight several evenings I took a couple of golf clubs and balls out to the acreage where the golf course once existed, trying to imagine where the holes might have run, being mindful to hit away from the dog-walkers. Ah, that notch in the trees in the distance — what a nice spot for a putting green. Maybe a century ago that patch was covered with sand and clay before they learned to grow grass greens in the South.

And late into the evening I tucked into my copy of Michael Murphy’s 1972 cult classic, Golf in the Kingdom. The thesis of one of my writing projects was that golf is a game best played and enjoyed by walking, and though I’ve read the book a couple of times before, I wanted to re-read it with an eye toward catching snippets that might support my view.

I found this rant by Dr. Julian Laing, the town doctor in the fictional Scottish village of Burningbush: “For every theory ye propose about the improvement o’ the game, I’ll show ye how the game is fadin’ away, losin’ its old charm, becomin’ mechanized by the Americans and the rest o’ the world that blindly follows them . . .  I see the distorted swings, the hurried rounds, and now the electric carts tha ruin the courses and rob us of our exercise.”

And I uncovered these morsels from Shivas Irons talking about Seamus McDuff, the mythical figure lurking in the shadows along the Burningbush golf course.

And, “‘Twas said tha he sometimes forgot his shots, the walkin’ got to be so good. Had to be reminded by his caddy to hit the ball.”

And finally, “If ye can enjoy the walkin’, ye can probably enjoy the other times in yer life when ye’re in between. And that’s most o’ the time; wouldn’t ye say?”

It was near midnight one evening when I turned off the lights in one of the upstairs rooms at the front of the house and made my way back to my bedroom, taking care that the old floorboards didn’t creak and disturb my fellow residents.

It was quite a splendid week, a couple of lunch appointments and evening rounds of golf with old friends, but it was mostly seven days of writing golf, reading golf and thinking golf. No news, limited outside engagement. Very quaint, indeed.

I was looking forward to returning to Weymouth in May, but sadly, the program has been suspended in the wake of the virus lockdown.

We’re certainly between shots at the moment.  PS

Chapel Hill-based writer Lee Pace has written the histories of Pinehurst Resort, Mid Pines and Pine Needles, and has authored a centennial book for the Carolinas Golf Association.