Discovering tempo at the end of a stick

Jim Hackenburg punches a few keys into his cellphone and waits for a video clip on YouTube to pop up. Seconds later, he’s showing John Candy in the movie The Blues Brothers sitting down in a bar with two prison guards and ordering drinks. He points at his two companions and asks: “Orange Whip? Orange Whip?” Then he looks at the waiter: “Three Orange Whips.”

“That very instant, I knew I had the name,” he says. “Orange is a vibrant color. There was a whipping motion to the device. It was perfect.”

That was in 2007, when Hackenberg, a former collegiate golfer, mini-tour player, PGA Tour caddie and at the time a club pro and swing coach, was trying to generate some momentum for a new golf training aid he was launching — a rubber ball on the end of a flexible shaft that was designed to help golfers feel the proper motion, sequence and tempo of the golf swing.

Hackenberg looks around him at the massive PGA Merchandise Show in Orlando in late January 2020 and reflects back to the beginning.

A dozen years later, the Easley, South Carolina-based company brought a dozen people to Orlando and rented six times the exhibit space over his initial foray into the trade show business. The Golf Channel dropped by and did a spot with anchor personality Kira Dixon demonstrating an Orange Whip device. And in addition to peddling and promoting the original Orange Whip trainer and knock-offs developed for putting and wedge play, Hackenberg has partnered with golf fitness specialist Brian Newman of Elk River Club in Banner Elk, North Carolina, on a new product line and streaming training service for golf fitness. There is a shorter, heavier version of the Orange Whip called the LightSpeed, designed for “speed training”; and a series of resistance bands and a concave hitting platform that addresses the basic swing skills of posture, rotation, weight shift and balance and swing plane.

“The Orange Whip has always been about tempo and feel with a small physical component to it,” Hackenberg says. “But I never really had a fitness program. There are certain parts of the swing that can’t be taught unless you have flexibility, balance and mobility. Brian has brought those puzzle pieces to complete the Orange Whip.”

Hackenberg grew up in North Dakota, played college golf at Arizona State and Oregon State, and by the 2003-05 era was spending his winters and springs caddying on the PGA Tour and his summers teaching at a club on Martha’s Vineyard. The contrasts struck him between the fluid, athletic swings of players like Geoff Ogilvy and Ernie Els, and the lunging and jabbing motions of many middle-aged club golfers.

“I was attracted to the pros’ balance and rhythm,” says Hackenberg, a PGA Class A pro since 2003. “These guys made it look almost too easy, like they can do it in their sleep. Their motion was so effortless. It was like they’d been holding the club their whole life.

“Then I’d be giving a lesson, and people were so tense and their only goal was to hit the ball, and when you try to hit at something it’s much different than swinging through it. I had a difficult time conveying that message. I couldn’t get them to feel the motion that came so naturally to the tour guys. I got tired of watching people chop at the ball.”

It occurred to Hackenberg that the proper visual was to swing a ball on the end of a rope or a chain. Any motion at all herky-jerky was doomed to failure.

“The concept that slowly evolved to me was that the golf club was no longer a golf club, but it was a ball on the end of a chain,” he says. “If you hold that chain and move the ball slowly back and forth on the end of the chain, your hands and arms and body would develop a more fluid motion, an athletic motion.”

Hackenberg dusted off his club-making skills in 2006 and concocted a crude apparatus out of a fiberglass rod with a metal weight at the end. 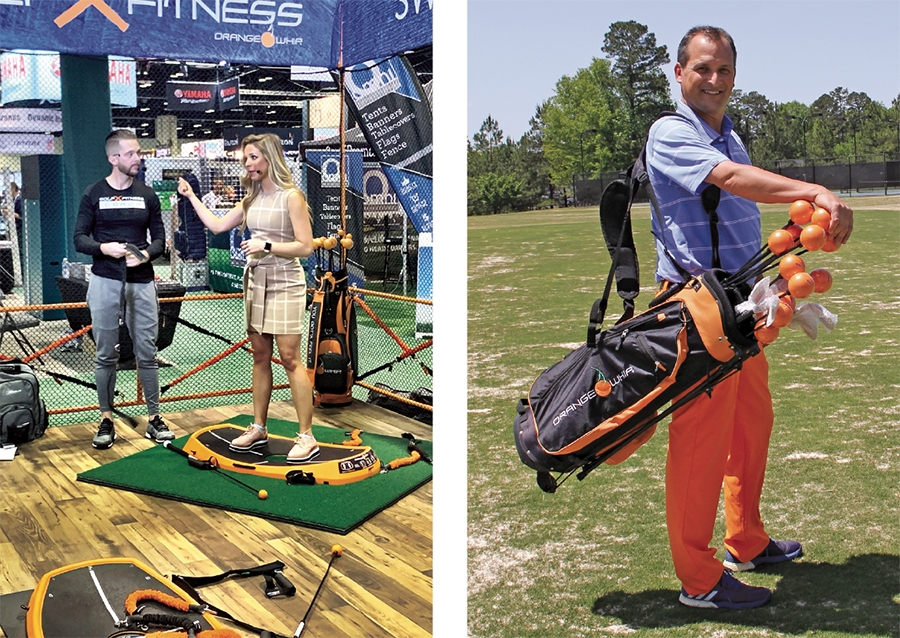 “There was a lot of trial-and-error and trips to Home Depot,” he says. He soon refined it with an orange rubber ball at one end and a golf club grip at the other. The key element is a patented steel weight at the grip end that “counterbalances” the device and works in tandem with the ball at the opposite end to promote good rhythm. Hackenberg took the device to the lesson tee on Martha’s Vineyard and demonstrated the motion to a golfer named Burke Ross, and then put the device in Ross’ hands.

“Within five minutes, you could see the light bulb go off in his head,” Hackenberg says. “He wanted to buy my prototype. Sadly, it was the only one I had. He had to wait another month until I made another quality one. That was my ‘ah-ha’ moment that maybe I can start a business around this idea.”

Hackenberg figured that since the device helped one golfer, maybe it would work magic for others. Within two years the idea had morphed from his garage on Martha’s Vineyard to a manufacturing facility near Greenville, South Carolina. Hackenberg’s brother lived in Greenville, so he hoped that cheap labor from nieces and nephews might come in handy, but more important was the location — within a half-day’s drive from Greenville you can find a lot of golfers.

“I knew the job would involve going around in my Toyota 4Runner carrying Orange Whips as a traveling salesman,” he says. “Within a 300-mile radius of Greenville, there are a ton of golfers. I can get to the coast easily, up to Virginia, Georgia, north Florida, to Pinehurst. Greenville gave me good proximity to a lot of golfers.”

You can see the orange ball protruding from the bags of hundreds of touring pros if you count the PGA Tour, Champions Tour and LPGA Tour. Hackenberg remembers one early seminal moment when TV cameras showed Retief Goosen getting a ruling and multiple camera shots showing that orange orb protruding from his bag. Graeme McDowell is a big fan, and Greg Norman insisted on paying for his Orange Whip despite Hackenberg’s efforts to give him one, saying the Whip was the “best thing for timing and release” he’d ever seen.

Hackenberg also touts the Whip’s value in improving flexibility and strength, and serving as an anchor for off-season practice.

“I grew up in North Dakota and had to re-learn my golf swing every year,” he says. “If you swing this club regularly through the winter, this athletic motion will become second nature, and you’ll be in playing shape for spring.”

By sheer coincidence, Hackenberg was paired with Newman in a Carolinas PGA competition at Hilton Head in 2018. Newman is director of golf and fitness at Elk River, and over the course of 18 holes the two men found common ground with Newman’s ability to teach golf fitness and Hackenberg’s manufacturing and technology expertise.

Over the next 18 months, they developed an online workout/drill program, teaching pro certification and physical tools to help golfers develop their strength, flexibility, balance and swing skills. They were heartened at the PGA Show not only from the response from rank-and-file attendees, but by the fact some of the top instructors in golf sought them out to see what they were doing.

“Golf fitness is now mainstream,” says Newman. “PGA Tour players look super-buffed. Guys today are pure athletes. They work really hard on their bodies, not only to hit the ball farther and swing harder, but for longevity and overall well-being.”

“I think this is going to be a big hit,” Hackenberg says. “It’s the next step in the evolution of the Orange Whip. And to think, this all came about because I was tired of watching people chop at the ball and was desperate to find a way to help them.”  PS

PineStraw golf columnist Lee Pace acknowledged having to move up a set of tees in the October 2014 issue (“Travails of a Short-Knocker”) and welcomes any life preserver from The Orange Whip.