It’s a cool gray Memorial Day morning, and the tide is nearly full beneath the big white ship moored at the heart of Wilmington, this city on a river. The wharf bustles with last-minute preparations for departure. Sailors in blue coveralls load pallets of provisions up the gangplank; a life-jacketed crew prepares the ship’s small boat for launch as a team of line-handlers surveys the bollards and places fenders over the side.

A few crewmembers are still arriving at the ship. Some come alone, with seabags slung over their shoulders, saluting the flag flying at the stern as they cross the ship’s brow. One petty officer tarries with his family in the parking lot, wearing sunglasses and crisp dress blues, his tight-lipped wife beside him as he hugs his children one more time. This is part of the service. Goodbye is a familiar word in every sailor’s vocabulary. But on this day, it feels a little more permanent.

Their ship is the U.S. Coast Guard Cutter Diligence, a 210-foot medium endurance cutter with a crew of 74. Commissioned in 1964, it has been stationed in downtown Wilmington since 1992 after undergoing a two-year, $28 million refit in 1990. After it departs it will spend the next two months patrolling the Atlantic, completing its missions of search-and-rescue, marine fisheries enforcement, counter-drug operations and migrant interdiction. To be diligent means to be persistent in application to one’s work, and Diligence lives up to its name: In 2011 it seized 3,000 pounds of cocaine in the western Caribbean, worth $34 million, and three years ago it intercepted three high-speed smuggling boats carrying $60 million worth of cocaine in the eastern Pacific. 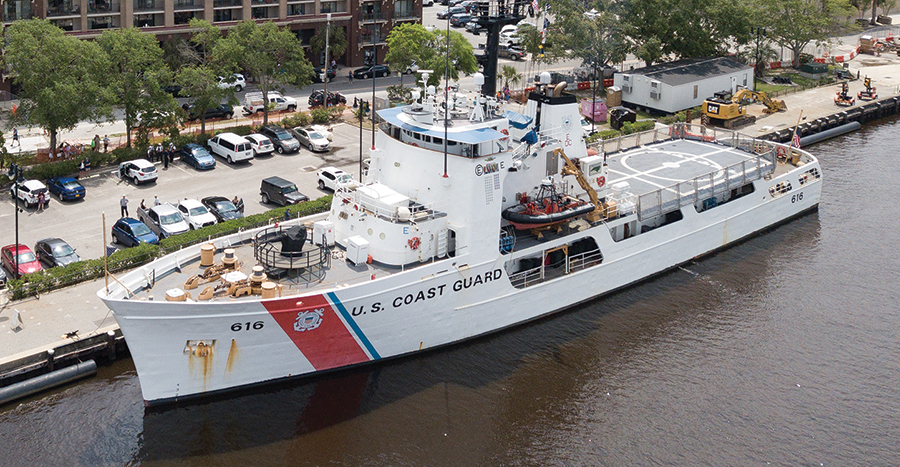 This is the sixth cutter to bear the name Diligence, an honor few ships share. The first Diligence was one of the 10 original revenue cutters, built by order of George Washington in 1791 to enforce customs and tariff laws and provide income for the fledgling nation, and sailed from Cape Fear the following year. It famously seized notorious French smugglers, an act which led to the mysterious disappearance of its master, Thomas Cooke, and his son in 1796.

According to Coast Guard historian William H. Thiesen, the next three ships named Diligence were also based out of Wilmington. Diligence II served in the quasi-war with France in 1798 and now has a full-sized replica in the Independence Seaport Museum in Philadelphia. Diligence III was lost in a hurricane off Ocracoke in 1806, and Diligence IV saw action in the war of 1812.

As of this morning, Diligence is the only cutter named for one of the Coast Guard’s original 10 revenue cutters still serving in its namesake’s home port. But when it casts off its lines, that comes to an end. After this patrol, its new home port will be Pensacola, Florida, where Diligence will be moored alongside three other ships in its class to make maintenance easier as they near the end of their service life. When Diligence is eventually retired, its name will live on. The Coast Guard recently announced plans to build 10 new ships: Heritage-class 360-foot offshore patrol cutters, which will become the mainstay of the oceangoing fleet. The first flight will include WMSM-922 (W means Coast Guard and MSM stands for maritime security cutter), the seventh Diligence, which will carry the name forward. But currently, the Coast Guard has no plans to home port another cutter in Wilmington, although the dock will remain available to visiting ships. 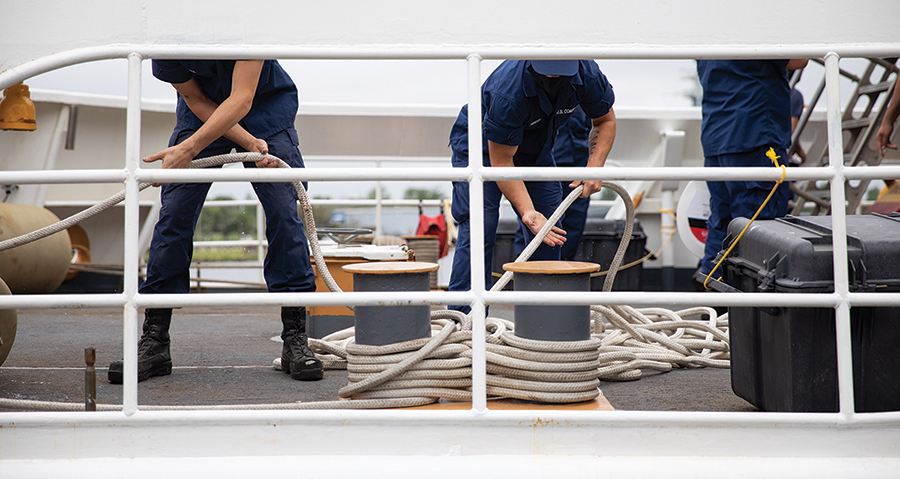 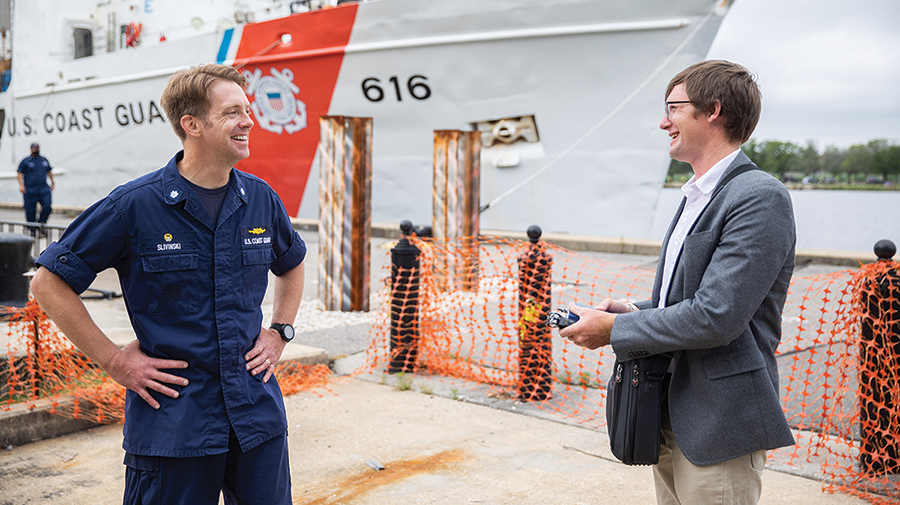 Cmdr. Luke Slivinski is the ship’s commanding officer. Lean and tan, with steady blue eyes and close-cropped sandy hair, he stands on the quay by the ship’s bow, talking to the press and the small group of civilians who have gathered. Even though the ship is leaving, he emphasizes that the Coast Guard will remain: Sector Headquarters for North Carolina will stay in Wilmington, and small boat bases at Oak Island and Wrightsville Beach will continue to stand ready to come to the assistance of mariners.

“The Coast Guard has enjoyed a very special relationship with the city of Wilmington,” he says, and “that close relationship . . . will continue.” Calling Wilmington a “hidden gem in the service,” both captain and crew are sad to be saying goodbye.

Though its home port will be different, the mission of the cutter remains unchanged. Life onboard, Slivinski says, is about how you’d guess it would be spending months at a time on a 210-foot ship with “70 of your best friends.” It’s nothing like a Carnival Cruise, he explains: The work is 24/7, and 16- or 18-hour workdays are typical. The types of missions and activities the cutter gets involved in are rarely scheduled. The Atlantic Ocean can be a harsh place, something they get exposed to quite regularly, and it’s tough to be away from family and friends (and for the younger sailors, cell service) for months at a time. 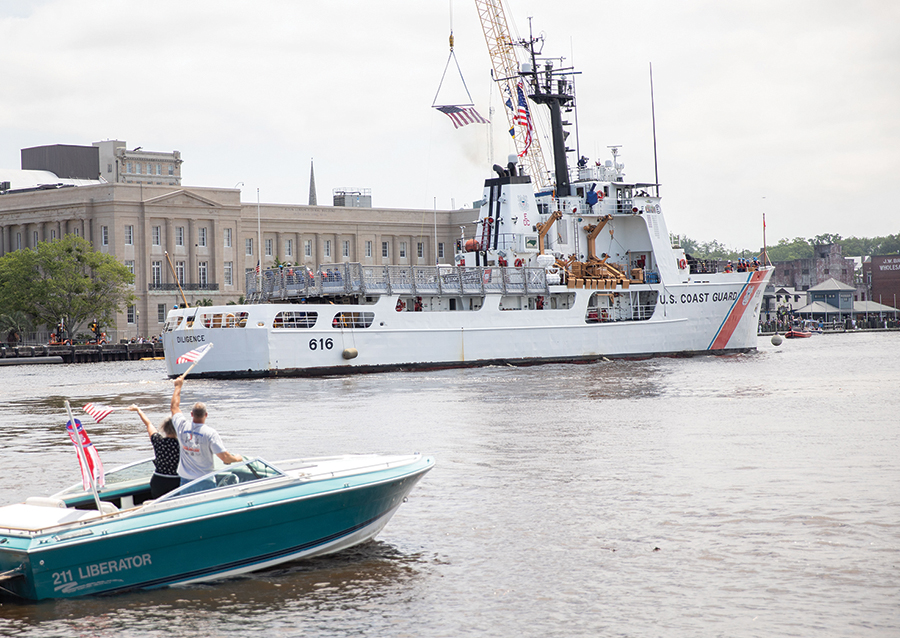 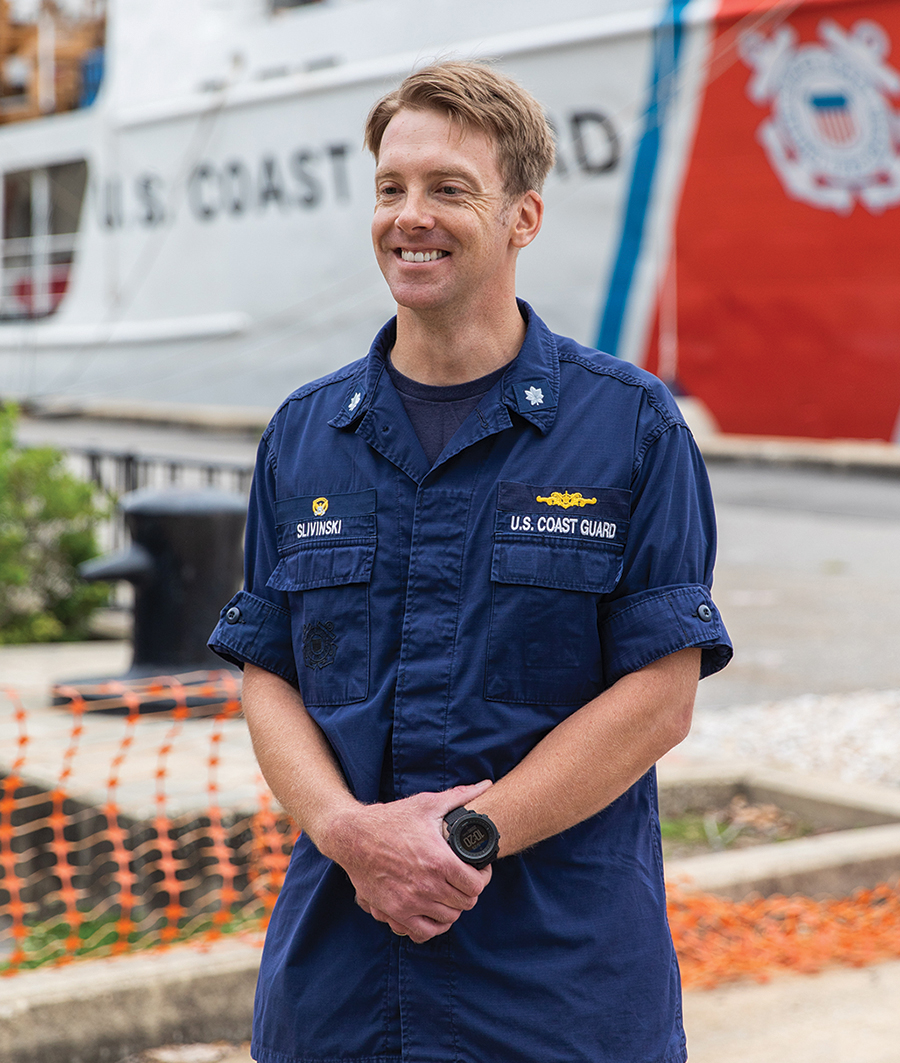 “But there’s a certain allure and mystique about going to sea,” Slivinski says. “Every day is different — the environment is constantly changing. It never stops moving. And it certainly humbles you, in a way, because you’re at the whim of the ocean and Mother Nature. It’s certainly special for me, which is why I’ve made a career of it.” Working together in tight situations, while stressful, has the benefit of creating a floating family. “That’s what keeps people coming back,” Slivinski says. “It’s not the food, or the long work hours, or the constant motion or seasickness. It’s being part of a group and getting to accomplish some amazing things that no one person could do on their own. The camaraderie that you have on a seagoing ship can’t be replicated anywhere.”

It’s time to say goodbye. The captain goes back onboard, and the only people left on the pier are the families of the men and women on the cutter, waving American flags and homemade signs. A banner saying “THANK U” billows from a window on a nearby building. On the golden river, an armada of local boats floats outside the perimeter made by a Coast Guard small response boat, waiting to wish the Diligence off one last time. The ship’s crew appears on deck, on the bridge, on the fo’c’sle and the fantail, bedecked in blue coveralls and orange life jackets. Gray smoke billows from the stack as the engines warm up. The clouds are parting, the sun is coming out.

One prolonged and three short blasts on the ship’s whistle, a deep baritone bellow that announces it’s getting underway, and 228 years of maritime tradition come to an end as it clears its lines for the final time. The small boats in the river sound a chorus of horns in response; a cheer goes up. American flags wave everywhere. Diligence backs out, pivots to starboard, and slowly gathers way downriver with the falling tide. The Wilmington fireboat throws a sparkling cascade of water skyward as Diligence leads the parade south.

The crowd onshore waves goodbye. No longer will their ship play soaring bugle calls when they raise the flag in the morning or lower it at sunset. No longer will their ship ring eight bells at noon, a naval tradition that dates back to the age of sail, when time was kept with sand-filled hourglasses and eight bells signified the end of a watch, that “all was well.” Part of the heartbeat of Wilmington leaves with this ship.

Diligence, among other things, is the living counterpart to the old gray battleship North Carolina across the river — an active part of our nation’s tradition of service, a tradition as proud and colorful as the rainbow of signal flags she flew from bow to stern, dressed overall on the Fourth of July. The great white ship passes beneath the yawning span of the Cape Fear Memorial Bridge for the final time, leaving the city in its wake, and heads out to sea.  PS

John Wolfe enjoys life as a writer and mariner on the North Carolina coast. More of his work can be found online at www.thewriterjohnwolfe.com.