Five friends and a meal to remember

In his first poetry collection, 1998’s Eureka Mill, Ron Rash writes about the connection he feels to his father, grandmother, and grandfather, especially their waking before dawn to work in textile mills. Rash refers to this connection, the connection to an ancestor’s experience without the experience itself, as “blood memory.”

I have always felt a kinship with Ron, and it is not just because our people come from the same places — the South Carolina Upstate and western North Carolina. I feel a deep bond with the experiences he writes about, the people he portrays, and the often disappearing landscapes he puts on the page. Is it blood that connects us? No, but when I read his work I feel like I understand Ron and the people he writes about as much as I understand my mother and father and the people who came before them.

This is what I was thinking about — this blood memory — when I left my adopted hometown of Wilmington and drove across the state, where the Appalachian Studies Association was hosting its annual conference on the campus of the University of North Carolina-Asheville. Normally, I am not someone who enjoys conferences: the academic talk, the nametag gazing, the feeling that everyone there is vying for the same thing, whether it is publication, notoriety, or the keys to both. But I felt at ease as the elevation increased and the air cooled because I knew I would be spending the weekend with writers and scholars who view the world in much the same way I do.

There were many people I was looking forward to seeing again or meeting the first time during our stay in Asheville, but I would be lying if I said I was not giddy at the thought of spending time with Lee Smith, someone I do not see as often as I would like and someone I will go to my grave believing is the most charming and warm-hearted person in all of American literature.

Along with novelist Silas House and his husband, writer Jason Howard, my wife Mallory and I had plans to have dinner with Lee in Asheville on Friday night before Saturday’s conference keynote event: a discussion between Lee and Ron Rash with me serving as the moderator.

I had met Silas House a few times over the years, but I really got to know him after we spent an evening in Swain County, North Carolina, last spring, facilitating creative writing workshops and readings with groups of high school students from western North Carolina and New York City who were participating in a literary exchange program. I had never met Jason before, but I knew his work, much of it focused on Kentucky’s rich music history and environmental issues like mountaintop removal.

For dinner, the five of us met at Rhubarb in downtown Asheville. Asheville has become a culinary mecca over the past decade, and while you may hear a lot about restaurants like Cúrate and Cucina 24, Rhubarb serves consistently incredible food comprised of regional ingredients. John Fleer, a Winston-Salem native and Rhubarb’s owner and chef, is the former executive chef at Blackberry Farm, and he was named one of the “Rising Stars of the 21st Century” by the James Beard Foundation. After a meal at Rhubarb that might include crispy fried hominy dusted with chili and lime alongside wood-roasted sunburst trout you can see how Fleer is steering into the 21st century with the roots of his Southern history fully intact. Rhubarb is one of my and Mallory’s favorite restaurants in Asheville, and we were proud to share it with Lee, Silas and Jason.

Over dinner and drinks, I asked Silas how he had come to know Lee.

“Over 20 years ago I submitted a story to a workshop Lee was teaching at the Hindman Settlement School in Kentucky,” Silas said. “And a few weeks later I went to one of Lee’s book signings. I was so nervous to meet her because I loved her books, and I wanted to be in her workshop.” 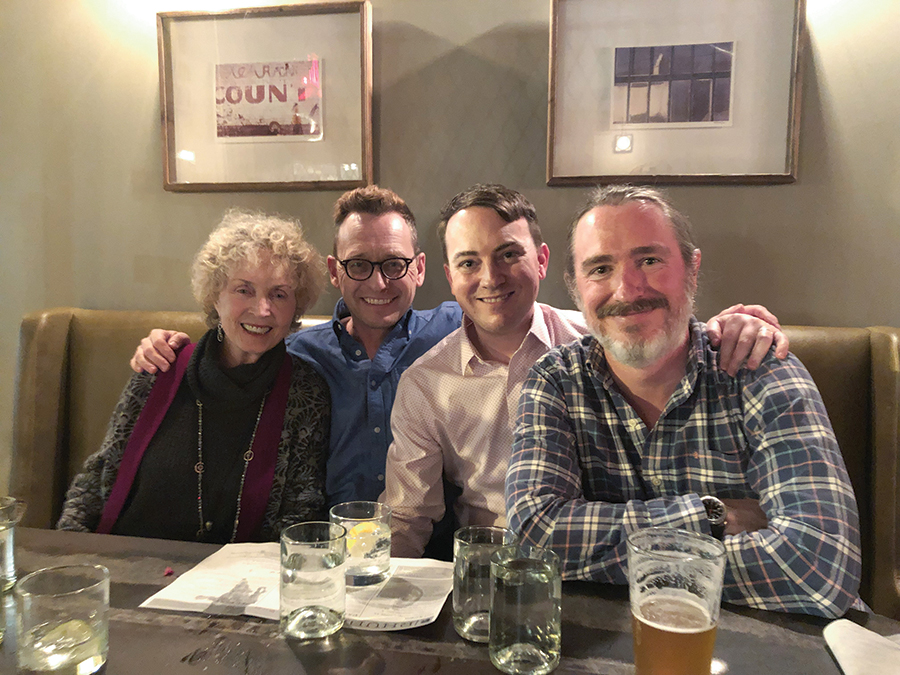 Lee laughed and picked up the story.

“And when you came through the line and told me your name so I could sign your book, I said, ‘How funny. I just read a very good story by someone named Silas.’”

“And it changed my life,” Silas said. And his life is still changing. His most recent novel, Southernmost, received rave reviews and kept him on a book tour for most of the spring and summer.

Over the years, Jason came to love Lee just as much as Silas does.

“I was in Washington, D.C. a few years ago,” Jason said, “and suddenly I heard Lee’s voice on The Diane Rehm Show. I dropped what I was doing and drove right to the NPR station. The receptionist asked me what I needed, and I said, ‘I’m just waiting on Lee Smith to finish her interview.”

“I came out of the studio, and there you were. It was like we planned it.”

Before dinner, Mallory and I had discussed whether or not she should bring her camera gear, but we decided against it. We wanted to enjoy the evening talking to people we do not get to see that often. But Mallory did take one photo with her cell phone; in it, Lee, Silas, Jason and I are all squeezed onto one side of the table. If you did not know better, you might think we were family.

The next afternoon, during the conference keynote, Lee, Ron Rash, and I spent an hour or so onstage in a packed auditorium talking about Appalachian writers and literature and issues specific to the region.

“I think it’s important to be able to steer students toward writing that reveals something about themselves,” Lee said. “There’s value in seeing your life on the page.”

“Robert Morgan did that for me,” Ron said. “And so did Fred Chappell’s book I Am One of You Forever.”

After our discussion, we took questions from the audience. Someone stood in the dark theater and asked if any of us have ever felt slighted because of the place we call home or how we speak.

“For me personally, that’s why I don’t want to ever lose my accent,” Ron said, “Because that to me is a rejection of your heritage. The way I look at it is, OK, you can make fun of my accent, but we can out-write you, we can out-music you, and we can out-cook you.”