Over cold ones at Flying Machine, writer Kevin Maurer remembers the impact of Hurricane Florence

When I moved to Wilmington in 2013, Kevin Maurer was one of the first friends I made. Over the years, I have gotten to know his family, and he has gotten to know mine. We have played on the same intramural basketball and football teams, and we have suffered losses and injuries, bonding over our bruised bodies and equally bruised egos. But what has informed our friendship more than anything else is the writing life. We regularly have dinner or drinks and talk about our decisions to become writers, and the effect our work has on our families and our friendships with people outside the publishing industry. A few months ago, I chronicled one of our conversations on Twitter, and it was retweeted over 1,200 times and responded to by writers as various as Neil Gaiman and Mary Alice Monroe, all of whom agreed that the writing life never gets easier, no matter who you are.

Kevin is one of the most successful writers I know — the New York Times best-selling co-author of No Easy Day: The First-Hand Account of the Mission That Killed Osama Bin Laden and American Radical: Inside the World of an Undercover Muslim FBI Agent; and a celebrated journalist who has written about the war in Afghanistan as an embedded reporter — but he is also one of the hardest working.

Our conversation once again turned toward the writing life when we met at the new Flying Machine Brewing Company in Wilmington a few days following my family’s return to town after evacuating in advance of Hurricane Florence. Kevin’s family had evacuated as well, but he had stayed behind to cover the storm and its aftermath for statewide and national news outlets. 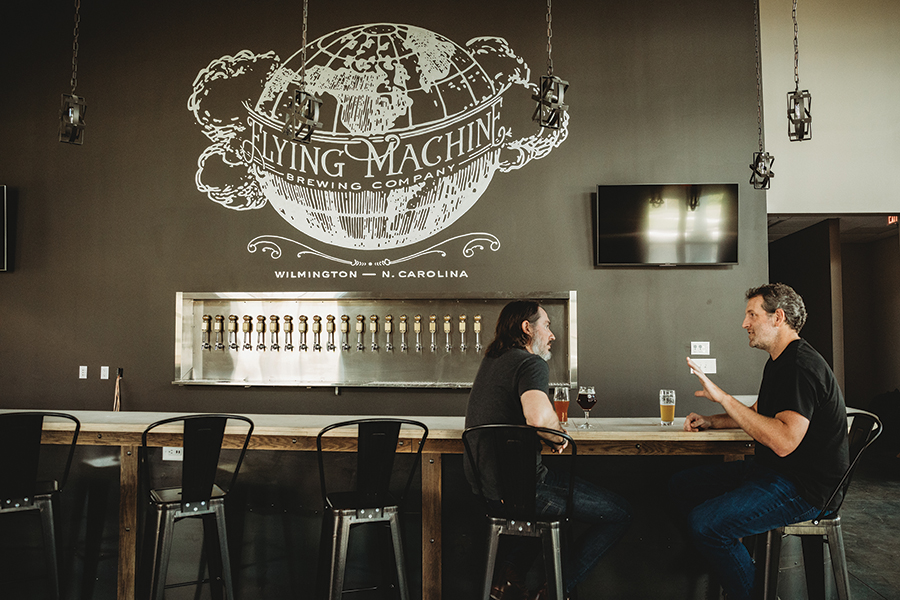 Flying Machine Brewing Company, which is set to open in early November, is on Randall Parkway, where it sits along the cross-city trail and has views of the lake at Anne McCrary Park from its two-story patio. The interior of the taproom feels both enormous and inviting, with clean lines and industrial seating that mirrors the sheen of the brewing equipment that brews all the beer on-site. Borrowing from the name, flying machines and parts of flying machines inform everything from lighting fixtures to wall art to the pulls on the taps behind the bar.

Although they were not open for business before Hurricane Florence hit, Flying Machine jumped into the community effort after the storm had passed by offering free purified water to anyone in need of it. There were plenty of people in need, and there still are. Because of this, Flying Machine has pledged to donate a portion of their proceeds from their grand opening to local nonprofits.

As Kevin and I settle in at the bar, we are delivered a round of beers by co-founder David Sweigart. He offers us the “Passarola” Brut Pilsner and the “Electric Smoke” Alt Bier, and he lets us know we are being served the first beers poured and sampled in the brewery’s history. Kevin and I agree that the honor of sampling Flying Machine’s first pours is made even sweeter by the fact that both beers are delicious.

I ask Kevin about what it was like to write about Wilmington before, during and after Hurricane Florence. As he takes a sip of his lager, I mention something he wrote in an article about the aftermath of the storm: Wilmington has become a city of lines, he wrote. Lines to get food. Lines for gas. Lines to get supplies.

“That was the hardest part of covering the storm,” Kevin says. “The waiting and watching people wait.” He stares at the wall across from us where a huge mural of a globe featuring the words “Wilmington N. Carolina” hovers above us. “I watched people sit in their driveways and wait for the water to rise, and I watched it get higher and higher by the hour until they decided they couldn’t wait any longer before they left and took whatever they could carry.” 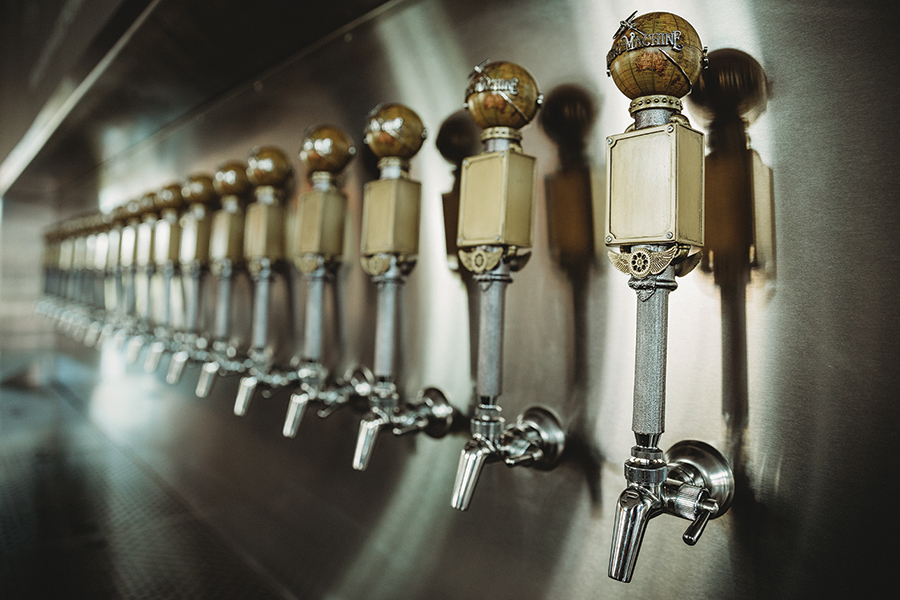 My family and I evacuated to Asheville, and we waited there, desperate for knowledge about what was happening on the coast, in Wilmington, in our neighborhood. I told Kevin I could not imagine being among those who were waiting here in town.

“It’s interesting,” he says. “My whole career has been spent covering crises around the world: war, famine, insurrection. It’s been hard to see some of the things I’ve seen, but I always get to come back home. Covering Florence was different. This is my home.”

After we finish our beers, Kevin and I are invited into the production area, where gleaming stainless-steel tanks tower above us. Taproom manager Marthe Park Jones, who has spent years working in the Wilmington craft brewing community, and retail manager Grant DeSantos, recently arrived from Asheville, where he managed retail for a major brewery, give us a tour and introduce us to a group of brewers who have spent years working and studying at breweries around the world. When the tour is over we stand around talking about the storm, and the long road the community and region have ahead.

Later, on our way out to the parking lot, Kevin and I make plans to get our wives together for dinner that evening at a local restaurant that has recently reopened. The city is gathering itself and moving forward. Wilmington and its people — both the long residing and the recently arrived — are no longer waiting. PS