For Garland, North Carolina, native Matthew Register, it all started with a dream, a dream of teaching his three young children how to cook barbecue.

“In eastern North Carolina, you’re always around barbecue,” he tells me on a warm July day. The two of us are sipping pale ales from Foothills Brewing on the back deck of his family’s vacation home in Kure Beach. “Soon I realized that I could stand outside and drink beer and listen to music and nobody would bother me if I was cooking. And then I read John Shelton Reed’s book Holy Smoke, and it changed me. I began experimenting with recipes and giving barbecue away. People started calling and asking if I’d make barbecue for their family reunions.”

Once the people of eastern North Carolina, a place so steeped in barbecue history and culture that it has its own style of barbecue, came calling, Matthew and his wife, Jessica, knew they were on to something. They opened a roadside stand and sold barbecue sandwiches for $5. They wanted to sell 30 on the first day; they sold 150 instead.

“We couldn’t believe it,” he says. “It all happened so fast.” And then the Sampson County Health Department got involved. “I have a really good relationship with the health department now, but back then they made pretty clear that I couldn’t be selling sandwiches on the side of the road.” 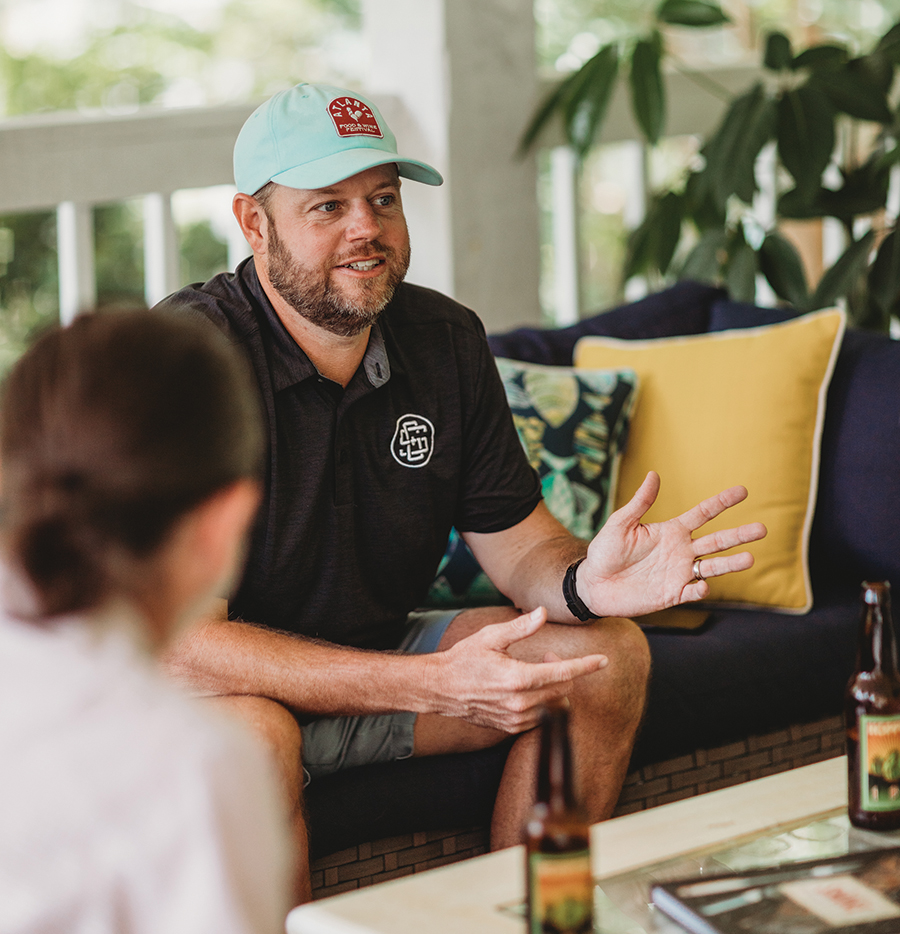 Matthew and Jessica began the search for a spot to open a small restaurant, and a former fish market seemed like the perfect place. In April 2014, Southern Smoke opened in downtown Garland, and the dream of teaching his children about barbecue exploded into something Matthew never could have imagined. Since then he has appeared on The Today Show. He has been featured in magazines and spoken at conferences around the country. And, in May, Register released his first cookbook, Southern Smoke: Barbecue, Traditions, and Treasured Recipes Reimagined for Today.

Even after all those hallmarks of success — a thriving restaurant, national acclaim and a cookbook — Matthew, as he writes in the book’s introduction, “didn’t set out to become a chef. In fact, even once cooking all day was my full-time job, I was uncomfortable with the title.”

I ask him if he has grown more comfortable with being considered a chef in recent years.

“A little,” he says. “When I think of the word chef, I think, that’s what Keith Rhodes is. That’s what Dean Neff is. That’s what Ashley Christensen is. I’m slowly growing more comfortable with it.” He takes a sip of his beer and looks at his book, where it sits on the table between us. “But now I’ve got this cookbook, and I’m dealing with those same feelings when people call me author.”

Make no mistake: Matthew Register can cook barbecue, but he can also write about it. While there are plenty of wonderful recipes in Southern Smoke, there are also the stories behind them. For example, the recipe for Smoked Chicken Quarters with Papa Nipper’s Church Sauce tells the story of Jessica’s grandfather, Jimmy Nipper, a man who “spent much of his youth shoveling hardwood coals into pits night after night, cooking whole hogs.” While he went on to join the North Carolina highway patrol, Jimmy continued to cook for fundraisers and church functions.

One of my favorite recipes is for Saltine Cracker Fried Oysters, which features a secret passed down from his great-grandmother Grace Jarmen Hart. The recipe also features instructions for making his grandmother Dorothy Hart’s tartar sauce with Duke’s mayonnaise, to which Matthew dedicates a short essay that argues for Duke’s being the best mayonnaise around. Don’t use it? “That’s a shame,” writes Matthew. 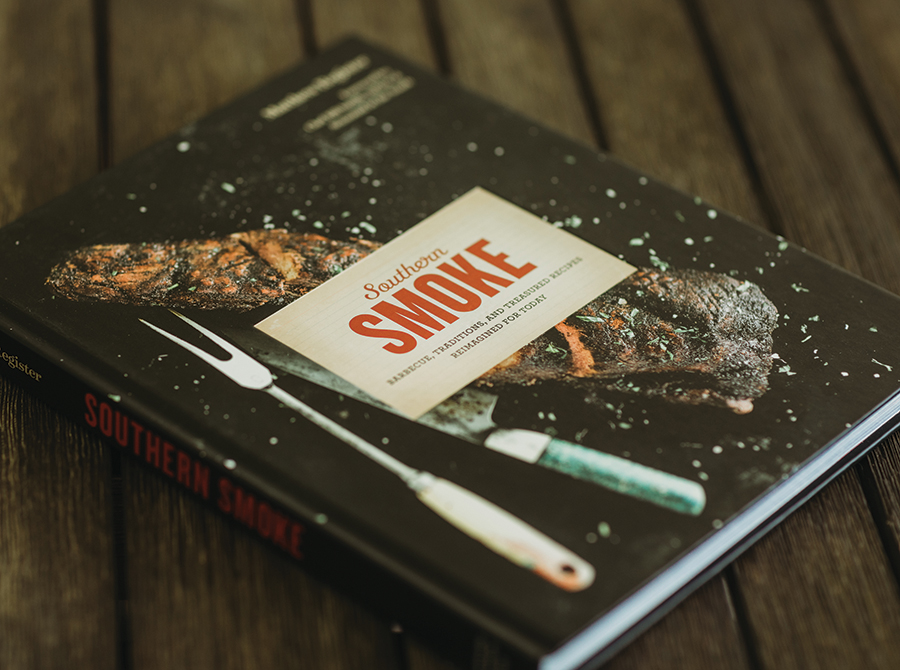 I ask him about the stories and historical information that accompany the recipes, and he tells me it was important both to honor his family as well as the diverse backgrounds of the people who have contributed to Southern cuisine.

“With Southern food, there may be five different wives’ tales about a dish, but you still don’t know where the food came from. A lot of people don’t understand how important West African food and culture are to Southern cuisine and vegetables like okra, for example. Our barbecue style is from the West Indies. A lot of our cuisine came from other parts of the world. But this is our story. This is what we are.”

Aside from writing the recipes, I ask him about the experience of making a cookbook. “We shot the photographs for the whole cookbook in four days,” he says, his forehead breaking out in sweat at the mere memory of it. “It was late July, early August, 100 degrees. We made 16 to 18 dishes a day. We just cranked out food.” Perhaps that is what Matthew is best at: cranking out food that is personal, consistent, and brimming with history.

“We opened Southern Smoke and had a long line on the first day, and the line hasn’t stopped,” he says.

Later, after telling Matthew and his family goodbye, I notice a plaque hanging just outside the front door. It reads, “Be careful with your dreams. They may come true.”

Matthew Register should have been more careful.  PS