The Ross Cottage gets a mulligan

Dornoch Cottage is to golfers what Graceland is to silver-haired rock ’n’ rollers. What Monticello is to American presidency buffs. What Tara was to Scarlett. Donald Ross not only slept, ate and breathed here, but built his home overlooking the third hole of Pinehurst No. 2. Value it as did Ross: Of the 400, and then some, golf courses the master designed, he chose to live on Midland Road.

This value has not diminished. In March, in response to the coronavirus pandemic, Pinehurst Resort auctioned off two nights at Dornoch plus three rounds of golf, with proceeds benefiting the Employee Relief Fund. The winning bid: $25,000.

When they get there, the winners should not expect a McMansion fitted out with gadgetry. Rather, a comfortable home, rich in memorabilia, with a romantic backstory: 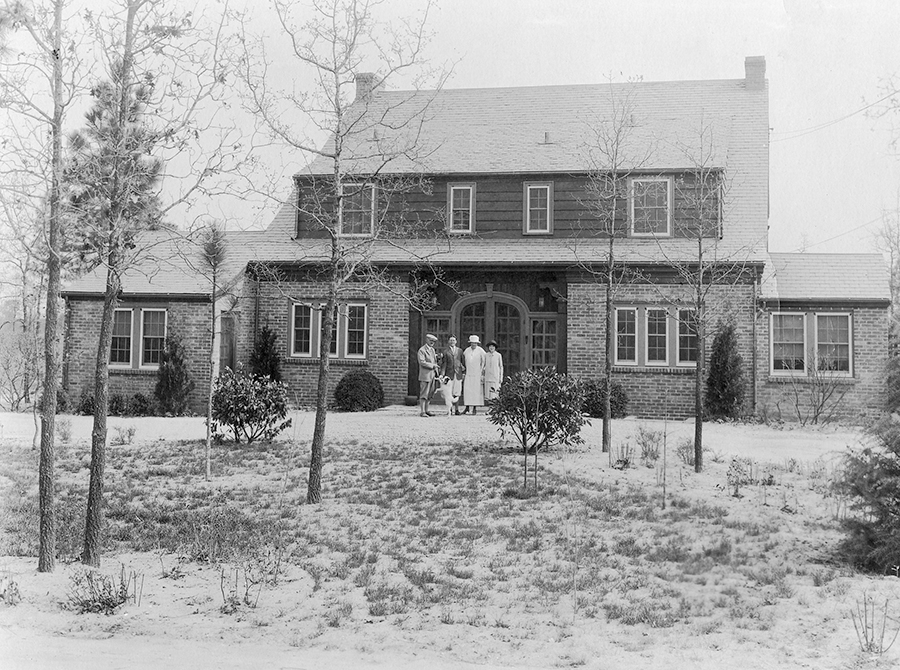 Ross, whose trade was listed as carpenter/clubmaker, arrived in Boston from Dornoch, Scotland, in 1899, with $2 in his pocket. The 28-year-old left his fiancée, Janet, behind but soon returned to marry her. James Tufts brought the budding star to Pinehurst in 1901, as club manager/pro. The young couple and their daughter Lillian lived at Hawthorne Cottage until Janet died of breast cancer, in 1922.

The widower was lonely.

Documents from the Tufts Archives at Given Memorial Library indicate that, about 1923, wealthy widow Florence Blackinton purchased a lot on Midland Road with the intention of building a winter retreat. The Tufts family sent Ross to negotiate boundary issues. Nature took its course; a year after Janet’s death, Donald and Florence married. 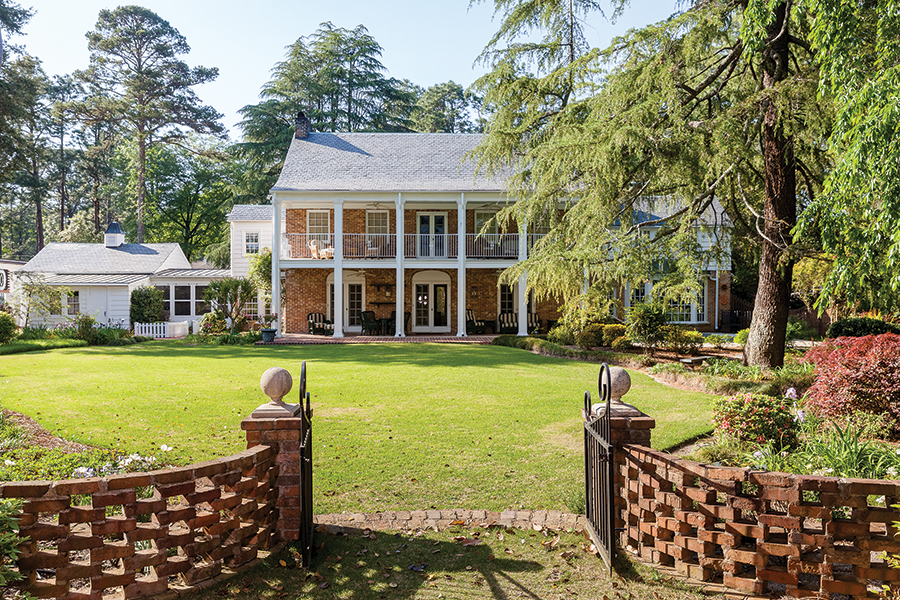 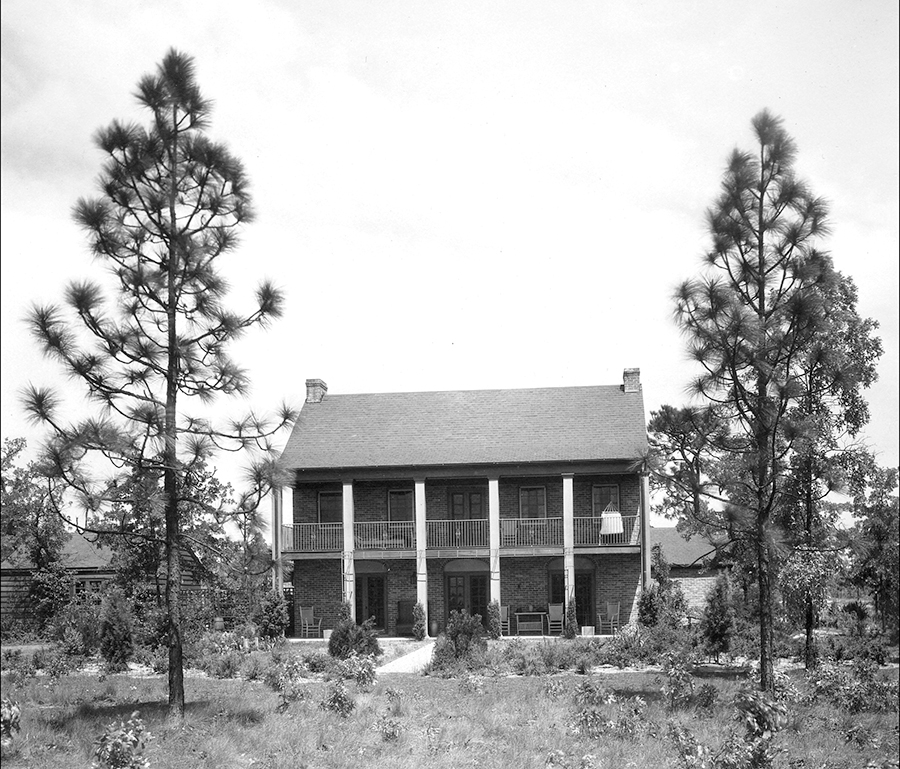 About that house Florence planned to build: She wanted an antebellum two-story colonnade spanning the width. Donald dreamed of a Scottish cottage done in stone and pinkish brick. Their compromise: Scottish front, plantation rear, main entrance on each side.

The compromise worked. Donald and Janet lived at Dornoch Cottage, named for his birthplace, until his death in 1948.

The house was purchased by Wayne and Jo Ashby, who entertained the Donald Ross Society there, and subsequently by Bob and Carol Hanson, whose livelihood and lives revolve around golf. Structural repairs were needed, desperately. Once they had been completed, the Hansons’ mission was to create a shrine to the Ross/Pinehurst legend, using Bob’s collections of golf art, antique clubs, photos and memorabilia. To that they added period furniture in the graceful Southern style. Pinehurst Resort purchased Dornoch in 2017 as a lodging option for special guests and began another round of renovations in January of 2018. 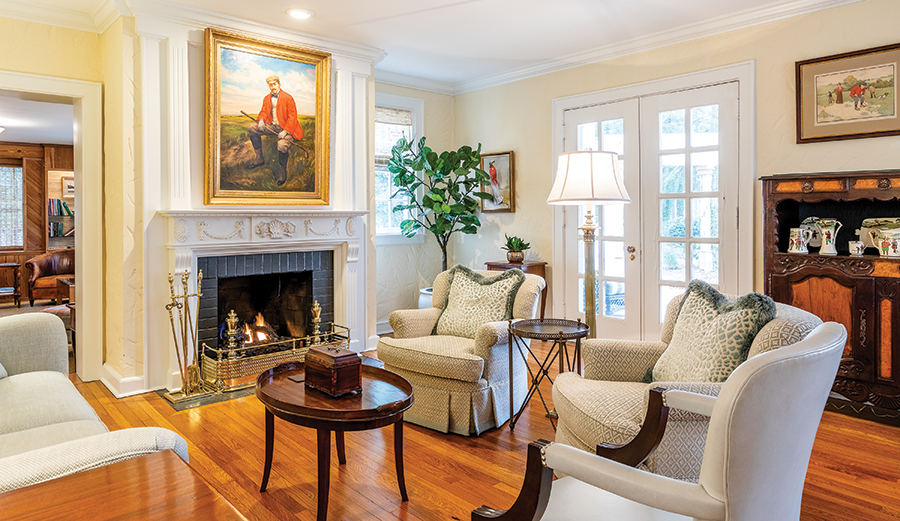 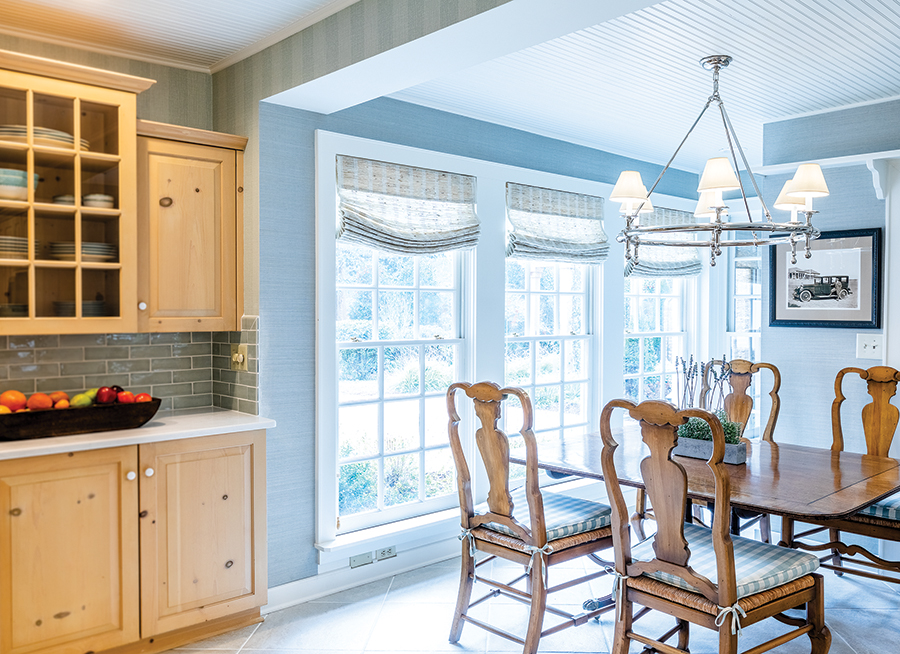 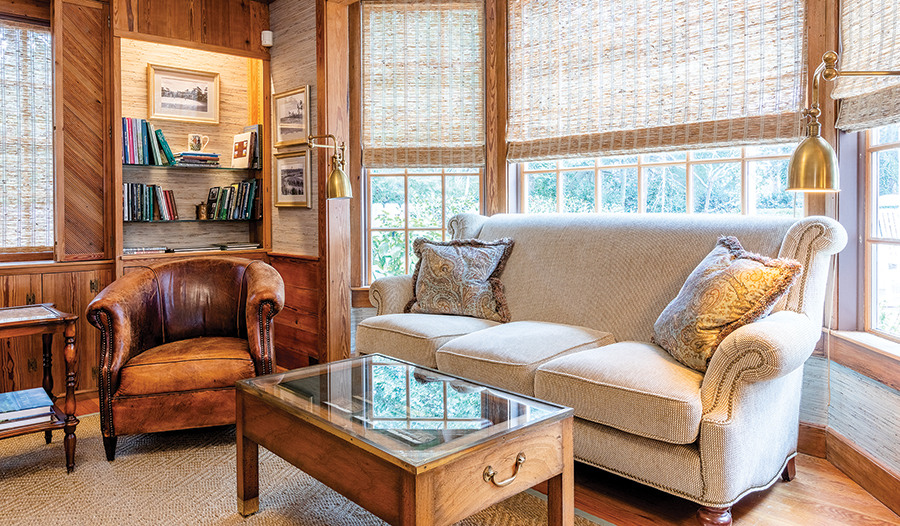 Decking it out suitably fell to Mark Clay, the Dallas interior designer in charge of renovating and furnishing Fownes Cottage, another historic residence renovated by the resort for conferences, VIPs and the personal use of resort owner Bob Dedman Jr. and his family. The result: comfortable, elegant, authentic yet less formal than Fownes; a place to invite friends for a drink, maybe a barbecue, while rehashing their birdies and bogeys on No. 2.

“Mr. Hanson took a lot of the memorabilia,” Clay recalls. “Mr. Dedman replaced some of it himself.” The rest was collected from Pinehurst shops and elsewhere. Clay worked with the furniture that remained, had some reupholstered, wallpapered the bedrooms and bathrooms, added draperies. The dining room table came up from Dallas, with chairs custom-made to complement it.

“This wasn’t going to be a private residence. I had to be practical about using what came with the house,” Clay says. 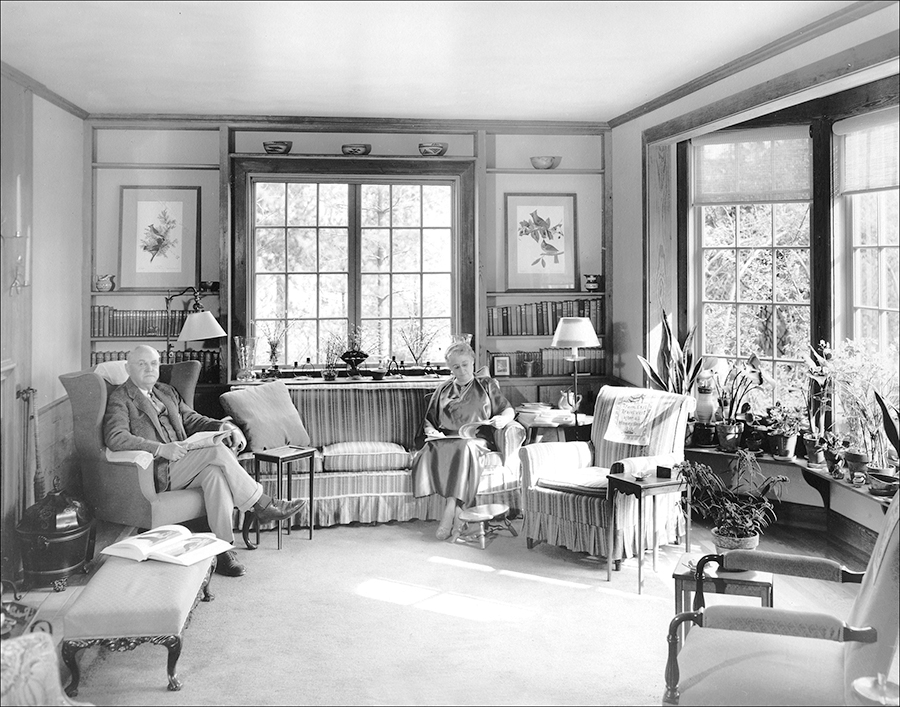 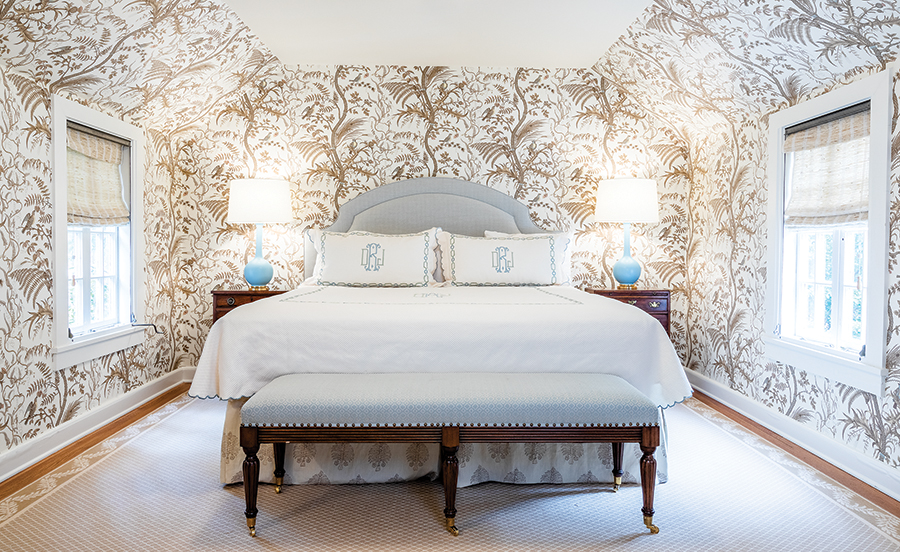 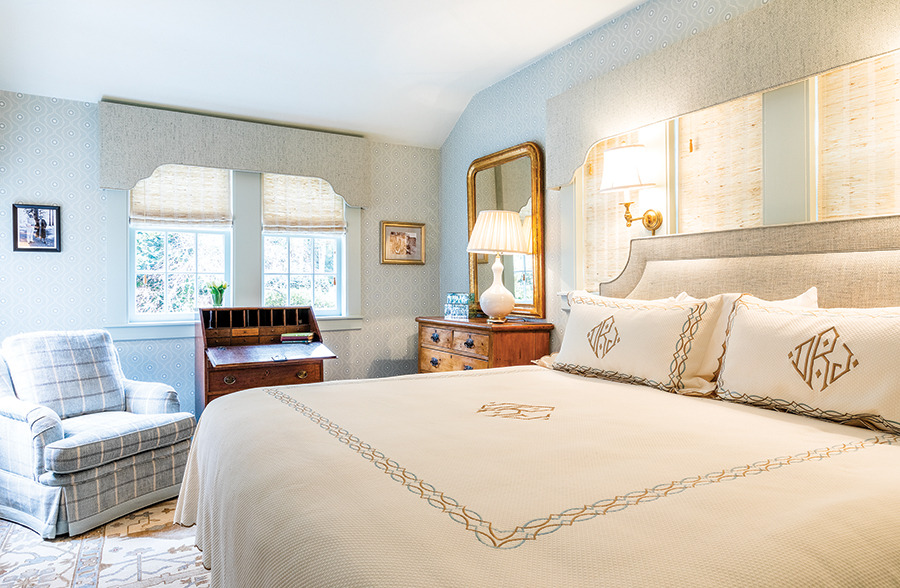 The floorplan remained the same, except for an upstairs “Nanny’s room,” where he put a soaking tub. But the bathrooms needed work and the kitchen got a new floor, a farmhouse sink, new countertops over existing pine cabinets. Clay used a grasscloth wall covering and a beadboard ceiling in the dining area.

Clay’s design signature, upholstered headboards, made the cut although he retained one classic four-poster bed with “R” embroidered on pillow shams.

A small, outdated swimming pool added post-Ross was filled in. The paneled den remained tartan-clubby, filled with golf photos and souvenirs. Much was added to the landscaping.

The result: another piece of Pinehurst history brought forward to 21st century standards with Wi-Fi and AC, leaving aura intact. 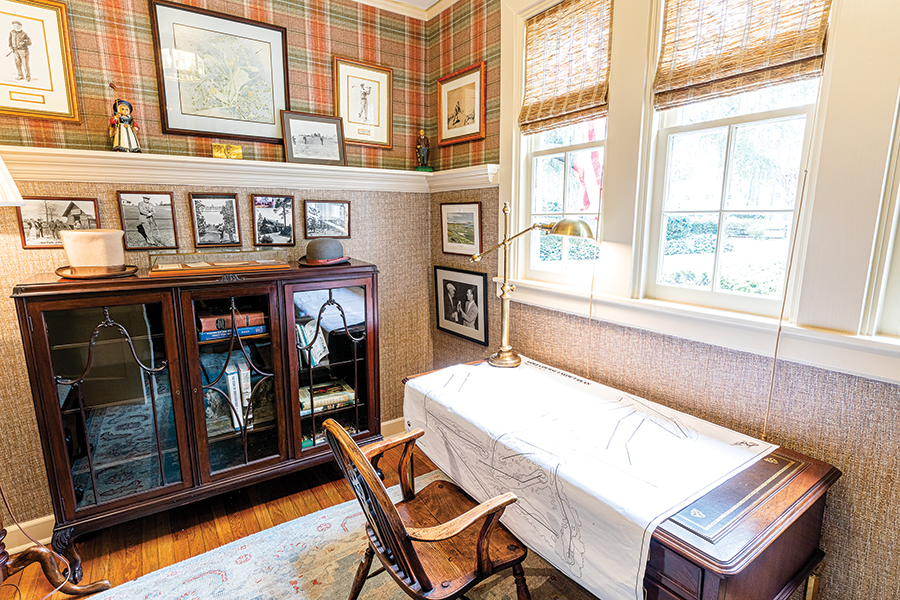 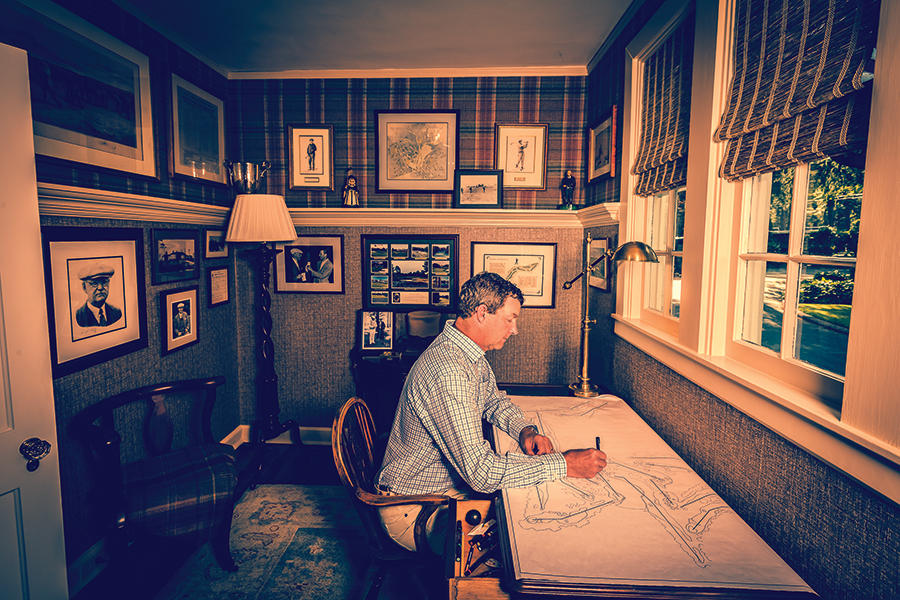 Clay had to complete the renovation in 12 weeks because Gil Hanse, internationally lauded golf course architect, would occupy Dornoch for six months while he redesigned Pinehurst’s No. 4 course.

“There is no doubt in my mind that living in Dornoch Cottage was one of the most meaningful experiences ever extended to Tracey (his wife) and me during my career,” says Hanse. “To wake up every morning in Ross’ house, look out the window at arguably his greatest creation, and sit in his office and work on plans of our own in the same space as he visualized some of the greatest holes on the planet still gives me chills.

“It also crossed my mind that all the mundane things we take for granted — like making coffee, taking out the trash, reading a book were also done by him, here. We lived in his house, and while all the thoughts about great course ideas he created under this roof and how many amazing golf holes were dreamed up — it was the notion that we experienced his house just like he did.

“That might be the most meaningful part of it.”  PS