Living on the lake fulfills a fantasy

Once in a while, there’s a Cinderella factor, which better describes the desire and means to transform a ho-hum ranch into a lakefront cottage showplace filled with art and sunshine. Wielding the wand was Jayne Rhodes, who already had Prince Charming in husband Ed.

Jayne grew up gracefully Southern, in Lexington, North Carolina, home also to Artis Hardee, who developed Whispering Pines in the 1960s. Her friends, the Mashburns, had a summer cottage on Thagard Lake, where she spent idyllic vacations: “I loved the water, the sailboats . . . ” Sun sparkling off the wind-rippled surface reminded her of diamonds. “I carried that memory throughout my life,” she says. It’s a life that eventually brought Ed and Jayne to Moore County, where they raised a family in a Weymouth residence built in 1895, then at National Golf Club.

Jayne suspects Ed was suffering from golfing guilt when he surprised her with “I’ll do anything you want,” to which she replied, “Let’s drive out to Whispering Pines, see if a house is for sale.”

They spied one, with a lock box. Ed, being a Realtor, had a key.

“We walked in and that was it,” says Jayne, recalling a day 20 years ago. “I looked beyond the house and saw the view.”

The house, built in 1968 by a Navy admiral from California, had high ceilings and hardwood floors but not much zip after standing empty for years. “When we came back the amount of work made Ed sick. It was just old, but we’re good at remodeling,” Jayne rationalized. “Don’t worry, baby. It’ll be fine.”

Jayne’s vision of “fine” would challenge the most determined fairy godmother.

With the view as her lodestar and an eye for design, Jayne marshaled forces. 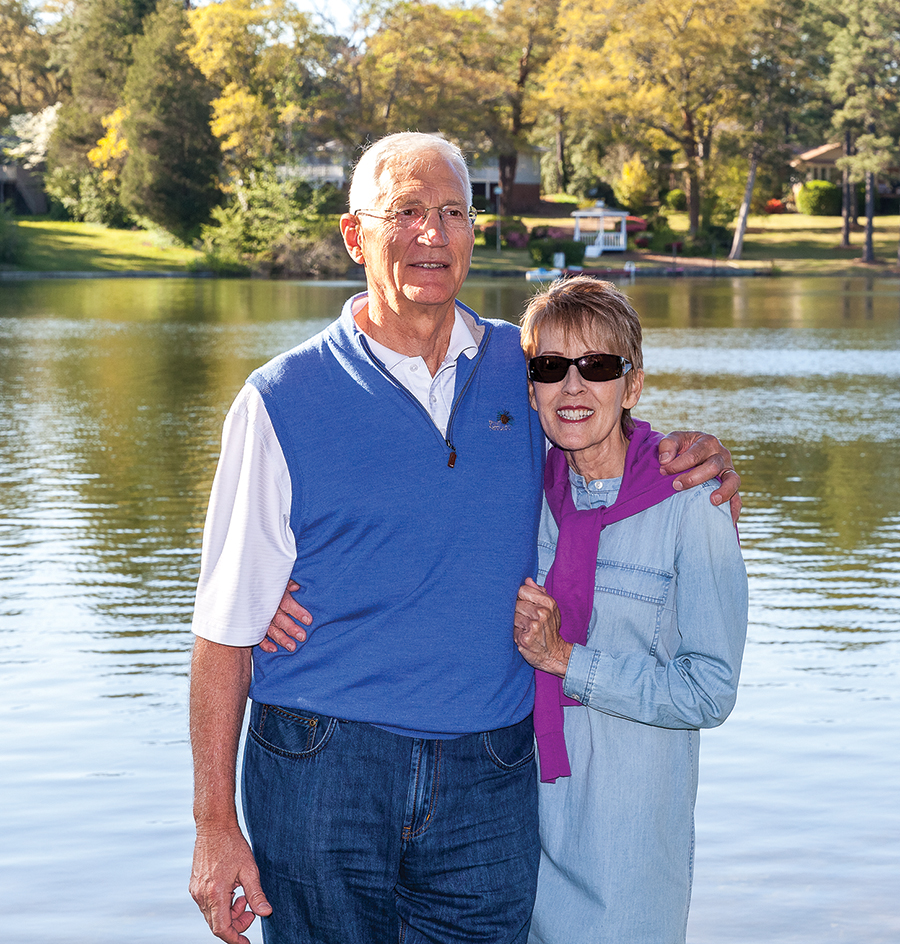 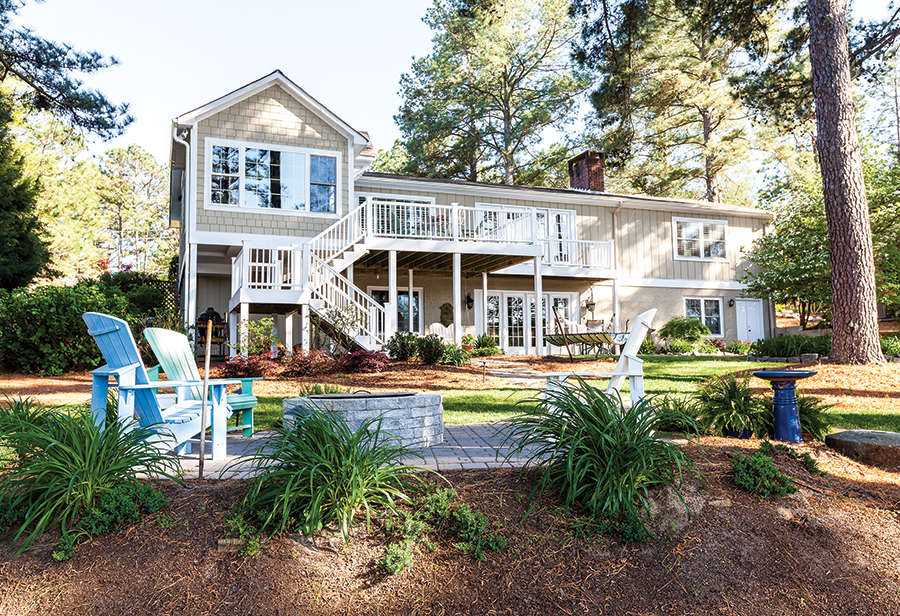 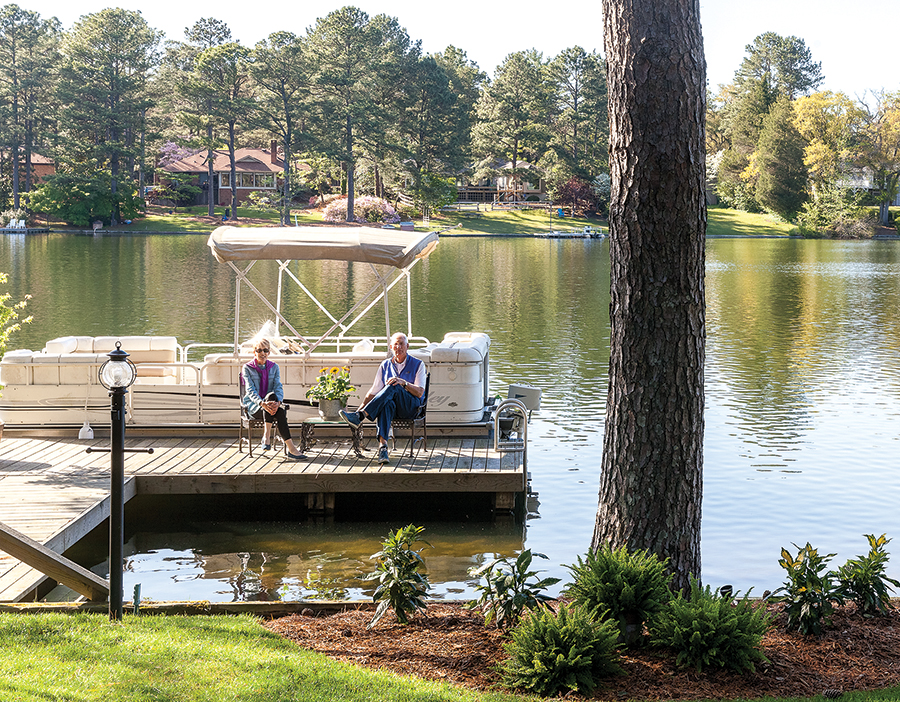 First, a layout adjustment. The small kitchen looked out onto a carport, which made it dark. That space became the formal dining room, while the elongated living room-dining area became all living room divided into two sections by furnishings and area rugs. At the end, a sun porch the depth of the house became the bright, sunny kitchen with many windows, vanilla cabinetry, cocoa granite countertops and — just imagine — a framed mirror over the range cooktop. “I can stand at the stove cooking, and see that painting (Jayne points to the end of the living room) reflected in the mirror.” Another novelty: The center island is L-shaped, with the sink positioned so Jayne can see beyond the breakfast room to her precious lake, while washing dishes.

That breakfast room represents a separate chapter. Ten years ago a squirrel found its way into the kitchen. While repairing the damage, Jayne and Ed decided to add this space, entirely surrounded by windows, as well as a deck, all facing that mesmerizing view.

Jayne isn’t sure why the main floor has only one bedroom, the master suite, with a ceiling vault that brings in even more light. Perhaps the admiral and his wife preferred privacy.

The staircase to the above-ground basement is open, making it as much a part of the foyer as one leading up would be. On this level, the family living room with raised fireplace and antique mantel, looks out onto gardens, a hammock, fire pit and dock through paned French doors which replaced Holiday Inn sliding glass. Two bedrooms and a bath accommodate the Rhodes’ three daughters and their families during frequent visits. 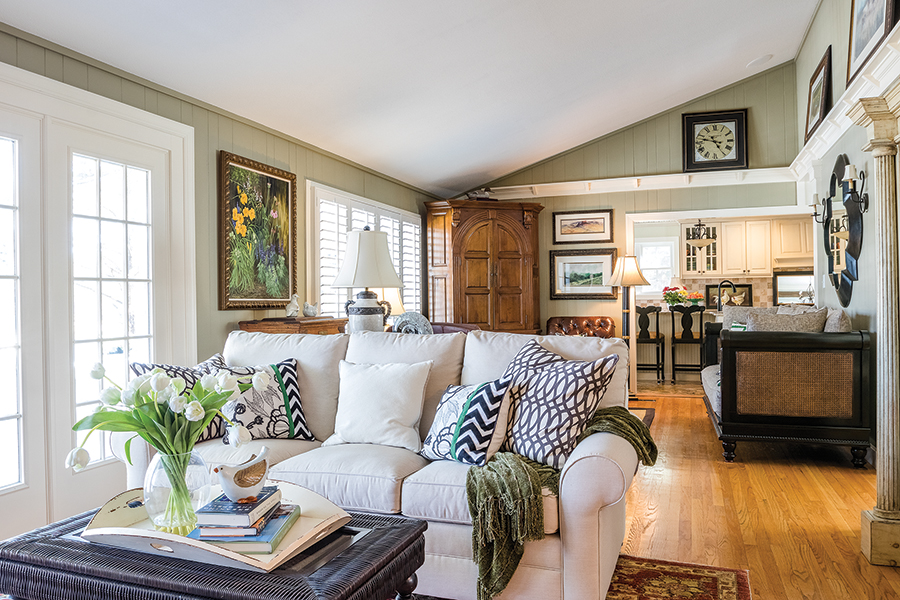 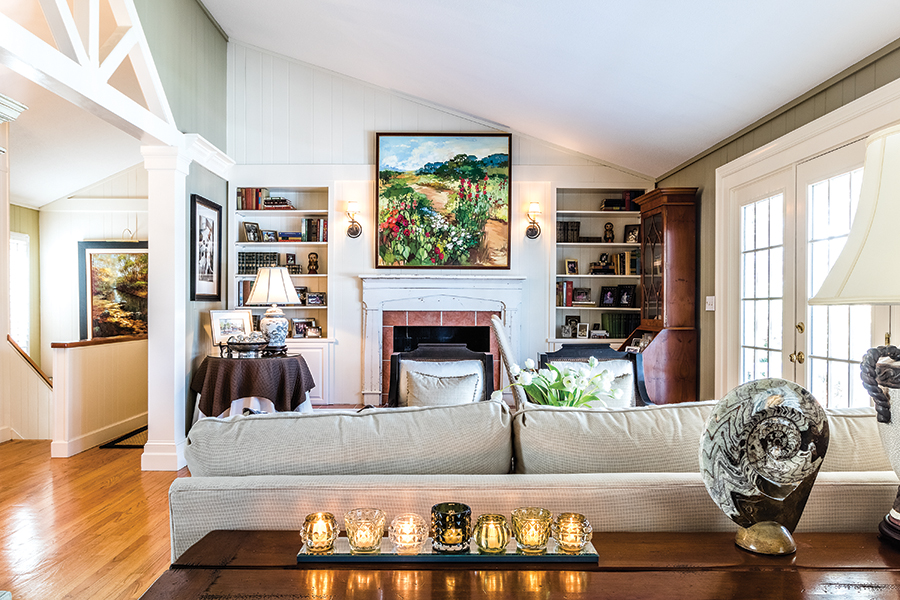 “Sandhills Community College changed my life,” Jayne says. She always wanted to paint, realized an aptitude and finally enrolled at SCC, studying with Denise Baker. “In class I got the idea of a framing business.” As a result, Framer’s Cottage opened in 2001. The downtown Southern Pines gallery sold furnishings and décor accessories, as well as offering designer framing. Here, Jayne became acquainted with local artists while fine-tuning her passion for art. Her collection, including some of her own charcoals, dominates the house, from a picture rail near the living room ceiling, to a photo-quality painting of spring blossoms hanging over an antique ice box. “Ed gave me that on a date,” she smiles. “He said if you marry me, I’ll buy it for you.”

The ice box, a church altar piece/foyer table, her mother’s corner cupboard, a dry sink and a few more family antiques complement Jayne’s penchant for dark woods, leather upholstery (impervious to grandchildren) and outdoor hues — pale, mossy green, beiges and browns brightened with ivory and white present in every room.  Primary colors are limited to the paintings, several reminiscent (along with terra cotta tile flooring) of Spain, where Jayne attended university, perfecting the language and absorbing the flair.

She adores the look of distressed painted pieces, which repeat throughout the house, even on ceramic and pottery lamps which, Jayne proudly confirms, are made in America.

Most unusual are wall treatments accomplished by “printing” a pattern directly onto the paint. In the dining room Jayne used a comb to achieve the modular block effect. Downstairs, she replicated a feathery design with . . . a feather duster.

Overall, Jayne describes her décor as transitional, a mix of traditional and contemporary falling just south of eclectic. 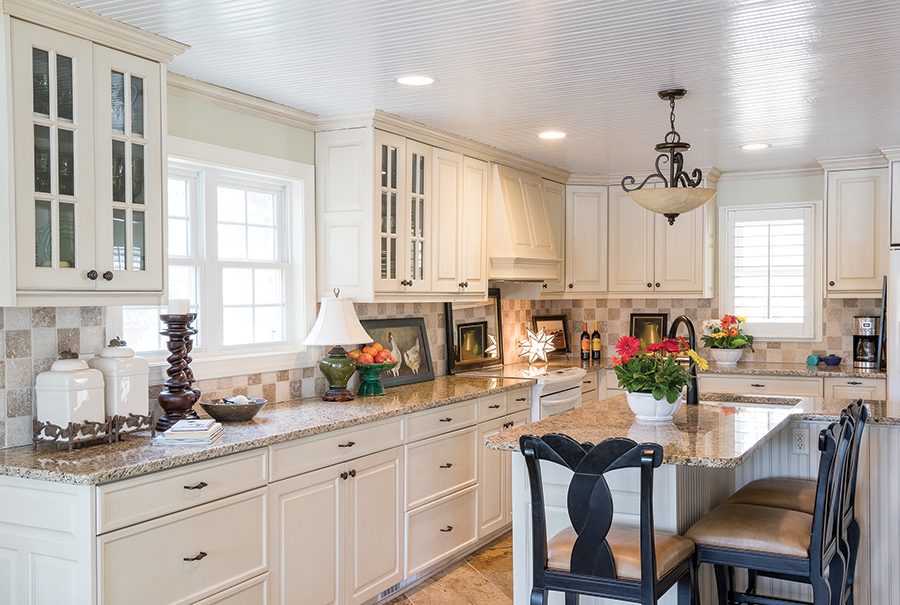 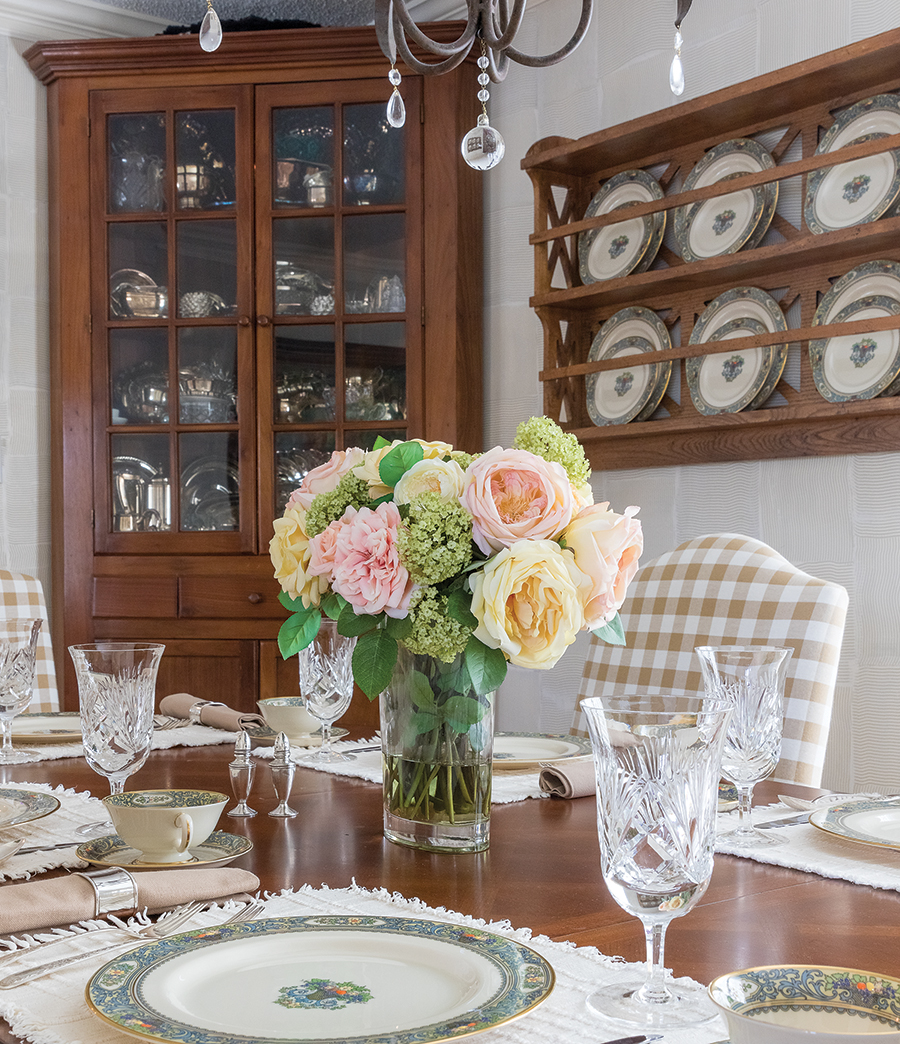 Like every fairy tale, this one has a scary part.

The Rhodes bought their lake house in October 1997. With renovations almost complete, moving was set for Dec. 9. The day before, Jayne went to buy more paint. Her car was hit at a stop light, causing serious injuries requiring surgery. Friends and her Sunday School classmates pitched in. By the time she came home from the hospital, almost everything was in place. “Our world had changed in a moment but the diamonds on the water helped me convalesce,” Jayne recalls. Then, when she could walk, she enrolled at Sandhills.

Ed experienced a scare, too. While carrying a refrigerator down the stairs on his back, he heard an ominous crack. Miraculously, he wasn’t injured. Later, a penny was found at the scene of the near mishap. Jayne called it Ed’s “lucky penny,” framed and hung it near the scene of the misadventure beside a lucky paper penny she brought from Spain. 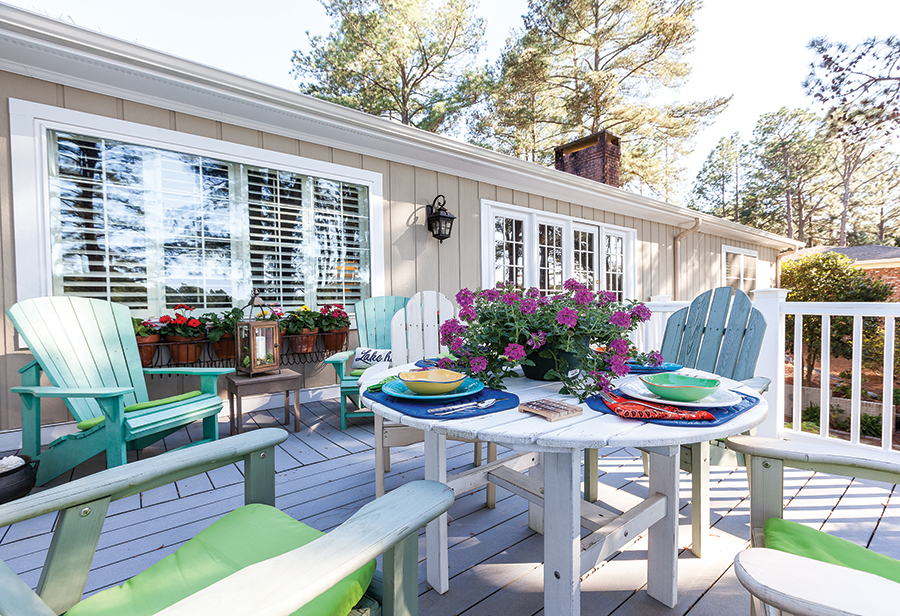 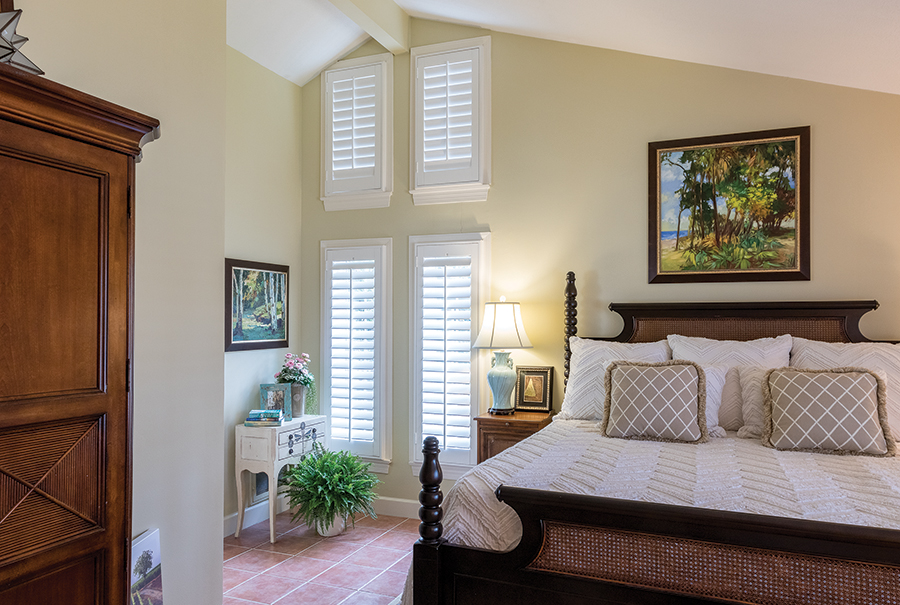 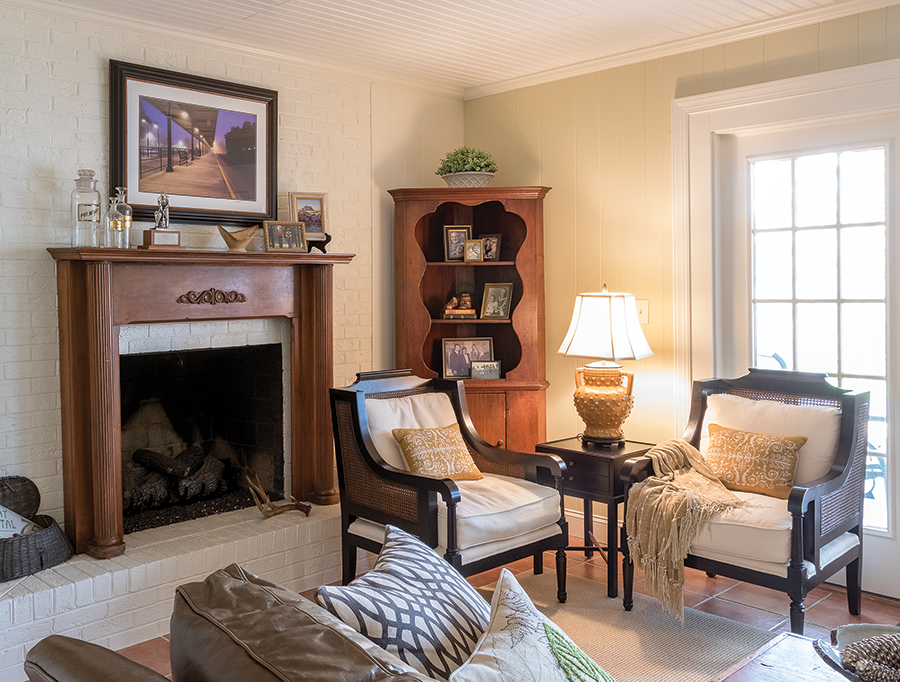 Window boxes, creeping ivy, flower beds and bright green grass sloping toward the lake complete the transformation from ranch to cottage. The final details address the exterior: an antique front door and painted shingles covering plank siding. Jayne added rose trellises to that carport, which remains an homage to the decade when Whispering Pines was born.

So, in the end, Jayne’s fairy tale came true: a house on the lake of sparkling diamonds conjuring long-ago summers spent with a BFF. A house where grandkids can eat drippy popsicles on the sofa. A house with fine paintings and traditional furnishings from Drexel but no Sub-Zero, in a neighborhood newly invigorated by young families.

Most important, a husband whose doubts were put to rest by the finished product. “As long as Jayne’s happy . . . ”  PS