An adventure gone wrong turned into the night of their lives

The white pages listing is for Richard Wayne Penniman. If you dial it the first thing you’ll hear is programmed classical music. Elevator stuff. If you’re lucky, it’s followed by Mr. Penniman himself. There was a time when talking directly with this man took more than a phone call. That was when Richard Penniman — aka Little Richard — rock and rolled the national music scene of the 1950s along with Elvis Presley, Chuck Berry, Jerry Lee Lewis and Fats Domino. His monster hits like “Tutti Frutti,” “Long Tall Sally” and “Lucille” became rock ’n’ roll anthems.

Now 86, Little Richard no longer keeps an entourage, living quietly far from the limelight in Lynchburg, Tennessee, the home of Jack Daniel’s whiskey. My call had nothing to do with his mega-hit celebrity. I was interested in his hardscrabble days performing in African-American roadhouses of the South during the late ’40s and early ’50s — the far-flung network of nightclubs informally dubbed the Chitlin’ Circuit and one place in particular, the Ambassadors Club.

Penniman, once the most flamboyant and attention-seeking of all rock ’n’ roll performers, wasn’t interested in “any of that.” He thanked me for calling and promptly hung up. Little Richard had no desire to remember a part of his life that one Pinehurst boy would never forget.

After World War II Sam Arnette opened the Ambassadors Club hard by the railroad track on Rt. 5 in Jackson Hamlet, a small African-American enclave bordering Pinehurst. It was home to the cooks and maids and caddies — the flesh and bone — of the grand resort. Both the club and Sam are long gone now, but in 1950 it was a hoppin’ place for rhythm and blues and dancing late into the night. Denied access to whites-only venues by the Jim Crow laws of the day, artists including Ray Charles, Ruth Brown, Fats Domino and James Brown mounted the Ambassadors Club’s stage, performing for sums barely sufficient to get them and their bands to the next town.

Tony McKenzie, born in 1936, and his five brothers of Scottish stock grew up in a home adjacent to the Pinehurst Race Track. In those days, the Oldtown area of Pinehurst was almost totally cocooned by a vast pine forest that provided a wondrous environment for Tony and his two older brothers — Fred, four years older, and Gene, two years Tony’s senior — to explore. The boys could virtually guide themselves blindfolded through the forest, blazing shortcut trails to the Pinehurst Dairy, Chalfonte Hotel, Watson’s Lake, Southern Pines, Aberdeen and Jackson Hamlet. They often pitched a tent and slept under the stars. One favorite campsite was the sand pit located, as Tony puts it, “a few skips and a hop or two” from Jackson Hamlet and the Ambassadors Club.

As the three brothers and their friend, Sherrill Cole, lolled around their campfire at the sand pit one Saturday night in 1950, they could hear the pulsating boom of a double bass along with the shockingly loud singing of a high-registered voice that periodically rose two octaves into a spine-tingling falsetto. They’d seen the Ambassadors Club posters tacked to utility poles along the highway advertising the appearance of Buster Brown’s rhythm and blues band, featuring lead vocalist Little Richard. The McKenzie boys had recently seen a movie preview at the Sunrise Theater featuring an unidentified preteen African-American who sang and played the boogie woogie number “Caldonia” on the piano with his hands and elbows to the astonishment and delight of the movie’s star, Van Johnson. The boys assumed (mistakenly) that the child musician on the silver screen had to be the same Little Richard who was now singing his heart out a stone’s throw from their camp. 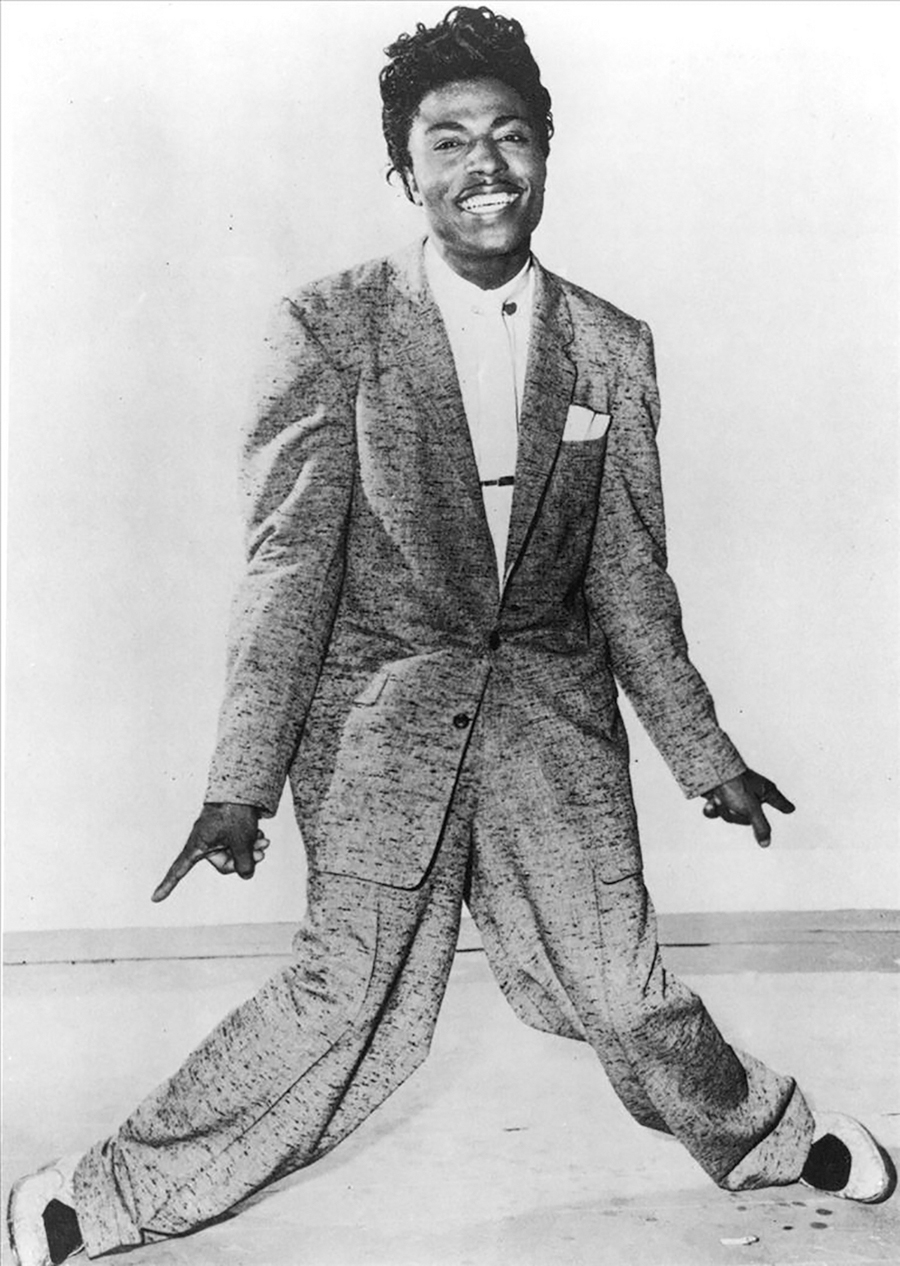 As he listened to Little Richard’s mesmerizing voice piercing the stillness of the night, the boys’ self-appointed leader, Fred McKenzie, considered how they could get closer to the music. Tony recollects that his older brother “always had a plan, and on the evening of the performance, he put his plan into action.” The plot involved sneaking up to an unlit exterior window of the club, where they would take turns peering inside. Though normally game to participate in Fred’s sometimes misbegotten high jinks, Tony, then 13, remembers cringing a bit at this particular scheme. What would happen if these white boys got caught sneaking around this African-American club? Might they be thrashed by security? Would they be reported to the police? Worse yet, what if their parents found out? Tony’s imagination ran wild at the potential repercussions. Despite his misgivings, the only thing worse than following the plan was being left out of it, so he and his three “accomplices in crime” stealthily approached the club like the army commandos of their imagination.

When the boys reached the window, they discovered it was too high off the ground to get a look inside. But Fred, with the sort of improvisational thinking that would later land him the rank of colonel in the U.S. Army, saw the solution nearby. A pile of empty wooden drink crates was confiscated and stacked together to serve as a perch for the boys. Tony had just mounted the viewing stand and was poised to look inside when a stentorian and commanding voice of authority shouted out, “What are you boys doing out here?” Terrified, Tony froze. On the ground, brother Gene escaped, hightailing it into the woods. Fred began to flee, but after a few steps, he stopped, deciding he couldn’t leave his helpless younger brother stranded on top of a pile of wooden crates. Sherrill also held his ground. Tony remembers the overwhelming dread he felt at the moment when he, Fred and Sherrill had to “face the music.”

To their relief, the moonlighting security guard who caught them was a man the McKenzie brothers knew well. Tom Dawkins was a jack-of-all-trades and had a friendly relationship with the boys. “You boys have no business sneaking around like that,” observed Tom. “If you really want to watch Little Richard, I’ll see if Sam will let you in.”

Dawkins hauled the three boys inside the club into the presence of the imposing Sam Arnette. The boys were acquainted with Sam, having traded empty bottles for candy and soda at Arnette’s small store across the road. After hearing about the drink crates and the window, Sam chuckled, nodded his head, and told Tom to find the young interlopers seats near the stage. Sam reached into his pocket and gave each of the bewildered boys two pennies to buy soft drinks.

Tony did not know what to expect. They were the only whites in the building and young kids to boot. He remembers how spiffily the patrons were dressed — the men attired in double-breasted zoot suits with tightly creased pants, the women in colorful finery — all dancing to the rhythm and blues music of the Buster Brown band.

Of course, the main attraction was Little Richard. Tony recalls being startled that Richard was not all that little, standing 5 feet, 10 inches — too tall to have been that tiny piano player he had just seen in the movie preview at the Sunrise Theater. Just five years older than Tony, Little Richard had not yet adopted the flamboyant makeup and outrageous stage outfits that would mark his later performances. And Richard’s “Tutti Frutti” had yet to be written and recorded. Though his greatest success was years away, Richard Penniman gave a rousing performance that long ago Saturday night at the Ambassadors Club, hitting the high notes that Tony can hear today.

Wrung out by the dazzling Little Richard and the up-and-down emotions of their escapade, the boys headed to the exit after the performance, escorted by Arnette himself. Before they hit the door, Sam took them aside and in a manner pleasant yet stern, said, “Boys, thanks for coming. I hope you enjoyed the show. But don’t come back!”  PS

Pinehurst resident Bill Case is PineStraw’s history man. He can be reached at Bill.Case@thompsonhine.com.

(In a previous version of this story Tom Dawkins was misidentified as Heck Dawkins.)